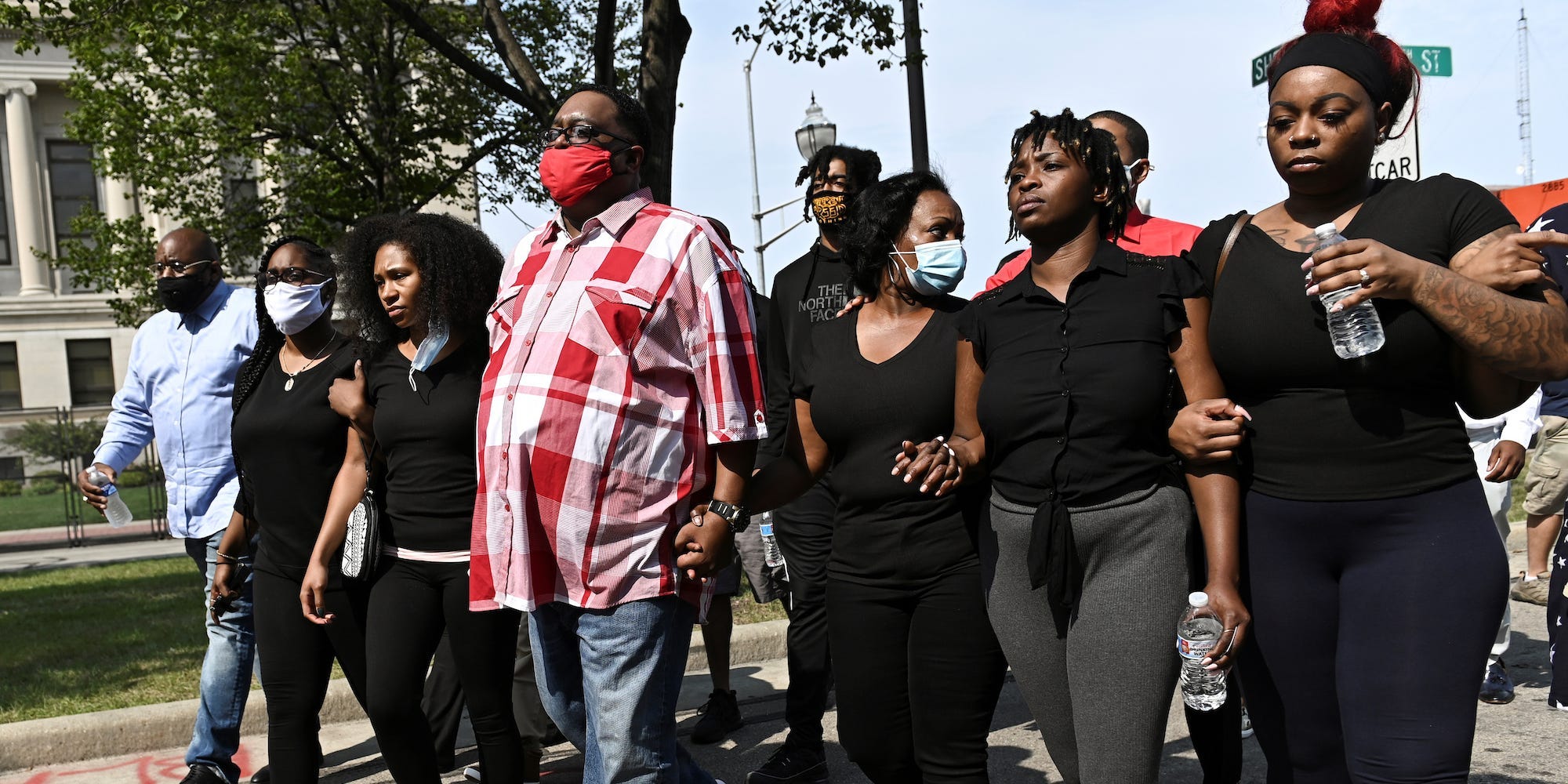 Reuters/Stephen MaturenFamily of Jacob Blake, a Black man who was shot several times in the back by a police officer, arrive at a news conference outside the Kenosha County Courthouse in Wisconsin on August 25, 2020.

When a police officer in Kenosha, Wisconsin, shot Jacob Blake repeatedly in the back as he was getting into his vehicle, his three young sons watched, screaming, from the backseat.

In the viral video of the shooting, Blake can be seen going back to the vehicle and opening the door when the officer grabbed the back of his shirt and fired his weapon at least seven times. A witness told Aisha I. Jefferson, reporting for Insider, that Blake was probably going back to check on his kids.

The traumatic effects that moment will have on Blake’s children – aged three, five, and eight – could last years, if not a lifetime, one child and adolescent psychiatrist told Insider. Blake himself, who is now paralysed from the waist down, has already expressed concern at the trauma his family is experiencing, his sister said at a news conference Tuesday.

Dr. Sarah Vinson, an associate clinical professor of psychiatry and pediatrics at the Morehouse School of Medicine, told Insider it’s painfully common for Black children in America to witness acts of violence from police against their parents or loved ones.

This is 29-year-old Jacob Blake who was shot by Kenosha police. His fiancé shared this picture with us. pic.twitter.com/6Si9lkCPFu

Though there’s little research on how police violence, in particular, affects children, Vinson said studies have shown that it’s especially harmful to children to witness violence against their caregivers, whom they trust to keep them safe, as well as violence from figures of authority like police officers, whom children also trust to protect them.

An abundance of research nationwide has shown that violence against children in general – or even the act of witnessing violence – can result in short- and long-term effects, including post-traumatic stress disorder and other emotional or behavioural problems that can last into adulthood.

“It’s not surprising, but it’s also still upsetting because when you think about what it means for a child to see anybody fatally wounded – the added stress of that being somebody you know, and being somebody you love can add another layer,” Vinson told Insider.

Children who witness a traumatic incident happening to someone they love process it like it’s happening to them, and spring into ‘survival mode’

The Blake children are far from the first to witness their parents or trusted adults injured or killed by police officers. 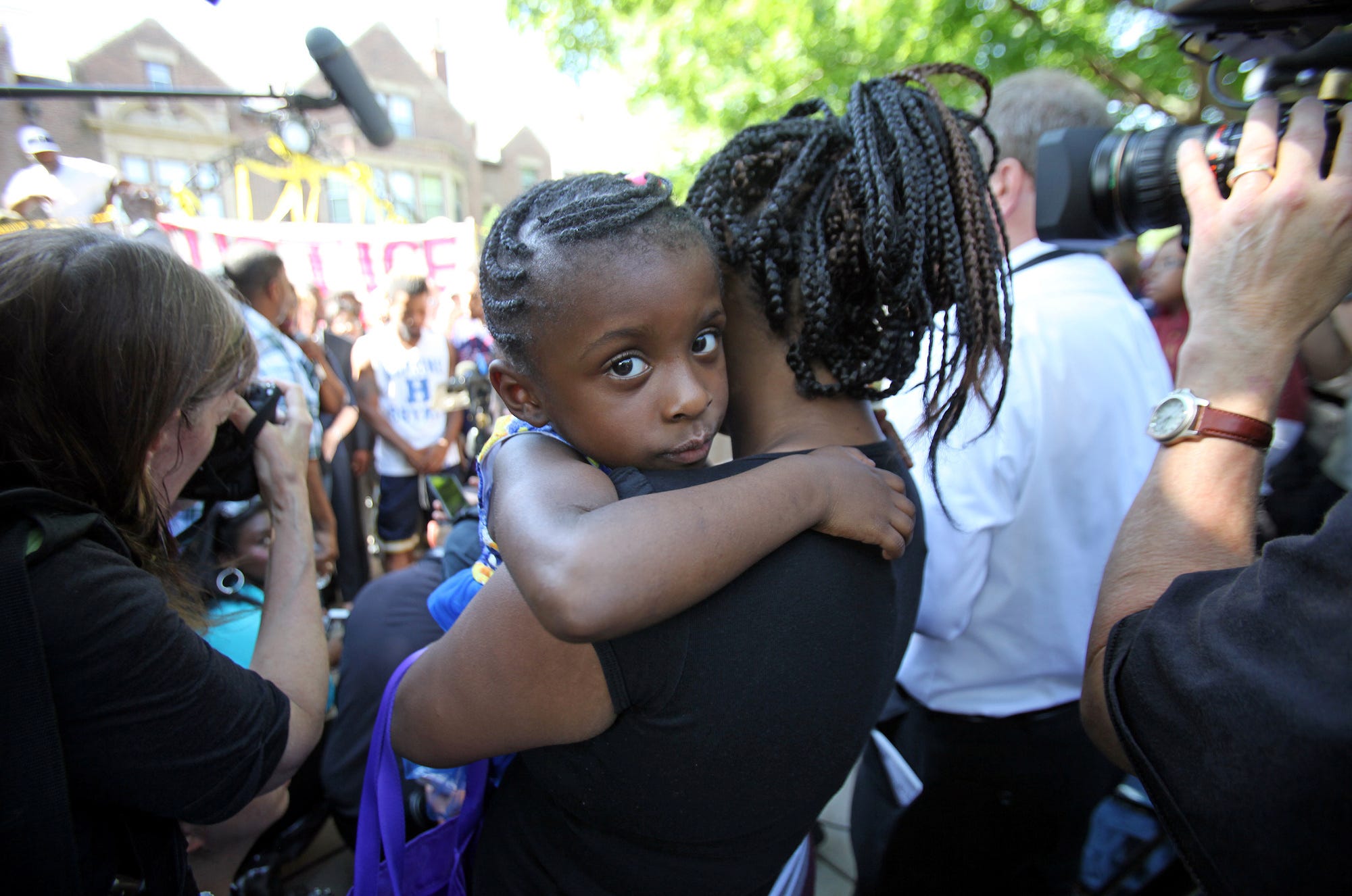 Reuters/Eric MillerThe four-year-old daughter of Diamond Reynolds, who was in the car when Philando Castile was fatally shot during a traffic stop by police, is held by a friend during a ‘Black Lives Matter’ protest in front of the Governor’s Mansion in St. Paul, Minnesota, on July 7, 2016.

The Kenosha incident bore some similarities to the fatal 2016 shooting of Philando Castile – the 32-year-old Black man was killed in his car by a Minnesota police officer as his girlfriend’s 4-year-old daughter sat in the backseat.

Vinson said when a young child witnesses a shooting or life-threatening violence happen to someone they love, they process the incident as though it were happening to them, and immediately pivot into survival mode.

“The body goes into a mode that is all about preservation in the moment. But that may not help you with how you consolidate that memory or understand what happened later in life,” Vinson said. “In the moment you may focus on certain aspects of it – you may run, you may try to fight. And so the way that your brain responds to that – it’s not really trying to make logical connections. It’s just trying to survive.” 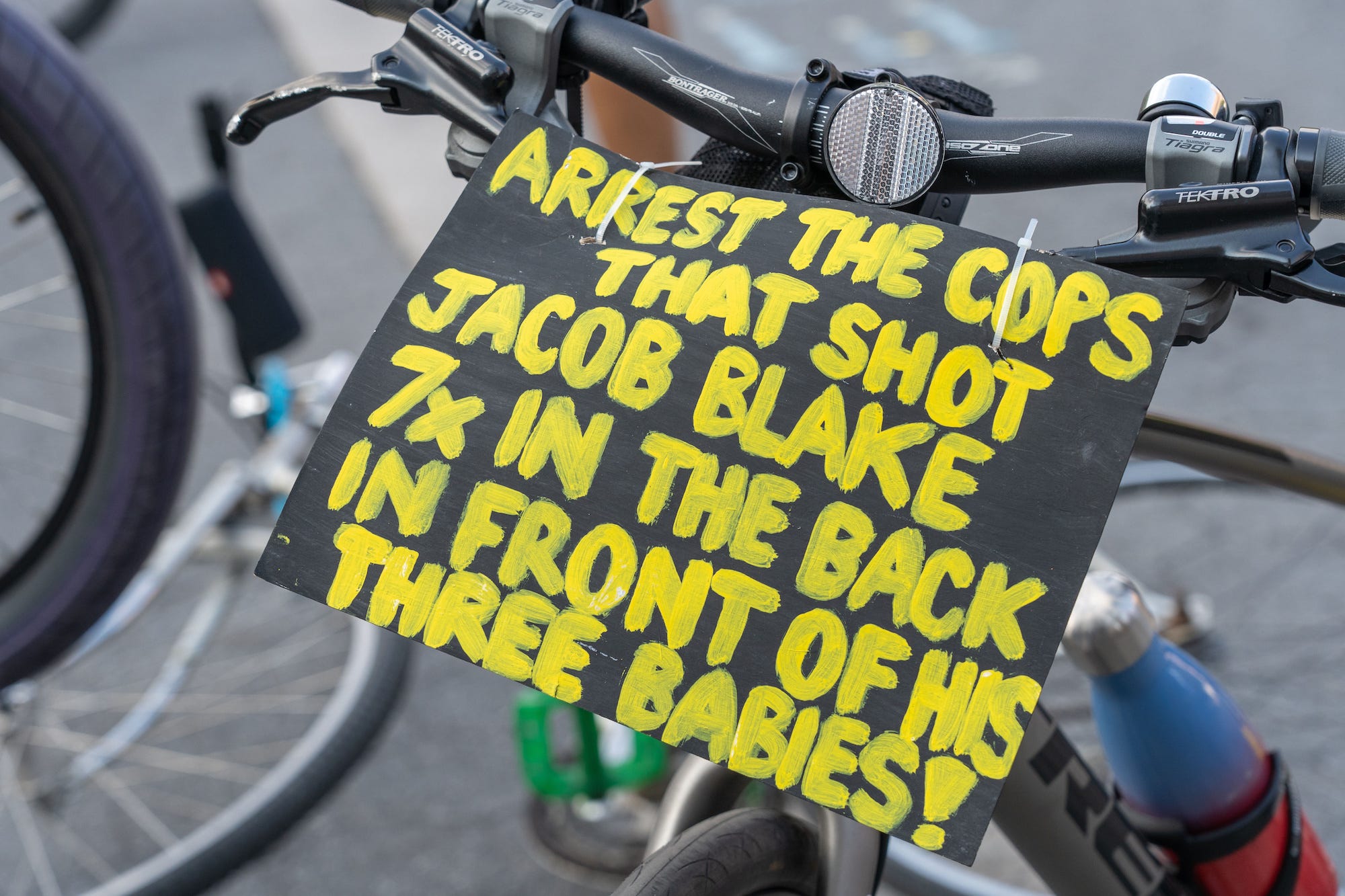 Ron Adar/SOPA Images/LightRocket via Getty ImagesA placard calling for an arrest of the cops who shot Jacob Blake is seen on a bicycle during a protest in New York City on August 25, 2020.

But Vinson said that even when the threat is over, the children’s brains may still be operating in that survival mode, and might act out accordingly, even in situations that aren’t life-threatening.

“What this does is it makes it hard for kids to feel safe,” she said.

Those behaviours are typical in any child who undergoes a traumatic or violent event at a young age, but it can be particularly harmful for those children whose caregivers were injured or killed by police, Vinson said.

In these cases, children must cope not only with the stress of what they witnessed, but they must do it without the comfort of the caregivers they trust, and they may feel a new sense of suspicion or betrayal from the authority figures who were meant to protect them.

“You have the added layer of not only is your parent not safe, but the people you’re taught to go to if you’re unsafe – the police – are the ones who are threatening their lives,” Vinson said. “What does that leave you with?” 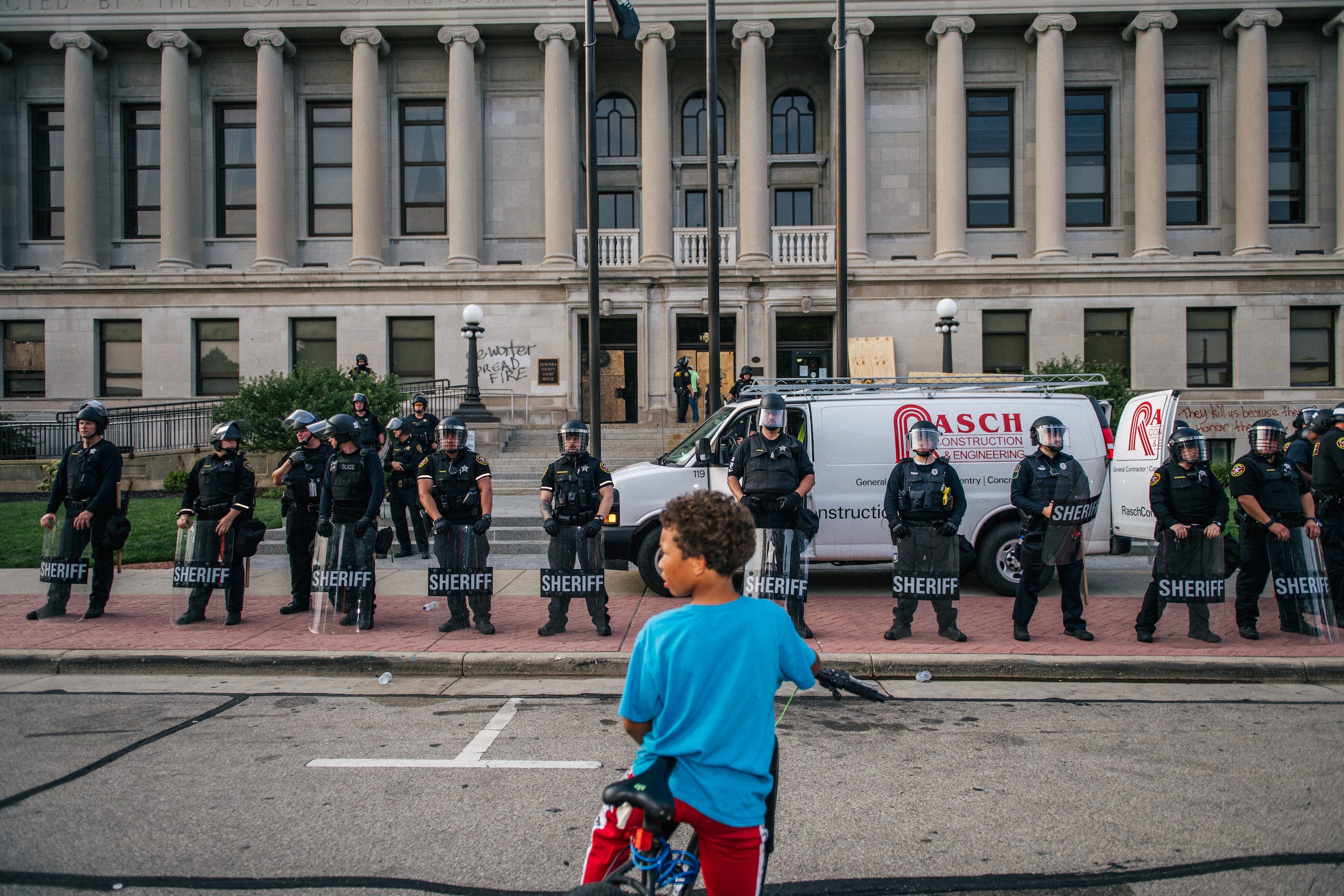 Brandon Bell/Getty ImagesA boy sits on his bike in front of law enforcement at the Kenosha County Courthouse on August 24, 2020 in Wisconsin.

Vinson said the most important thing for Blake’s children right now is a sense of stability, and support from their family and community. She said having adults around them who are available to talk to them about what they witnessed is integral in helping children process the shooting, though understandably, many of the adults around them may be traumatized themselves or busy in various caregiving tasks.

The aftermath of such trauma can also pose problems for Black children in particular, who are often given far less grace than their white peers when it comes to behavioural issues.

“If something is distressing for the child, if they don’t have an effective way to deal with that, it can result either in things like depression and anxiety, or it can lead to them acting out,” Vinson said. “And especially for Black children, you have a school system that disproportionately expels them, and a criminal justice system that disproportionately incarcerates them.” 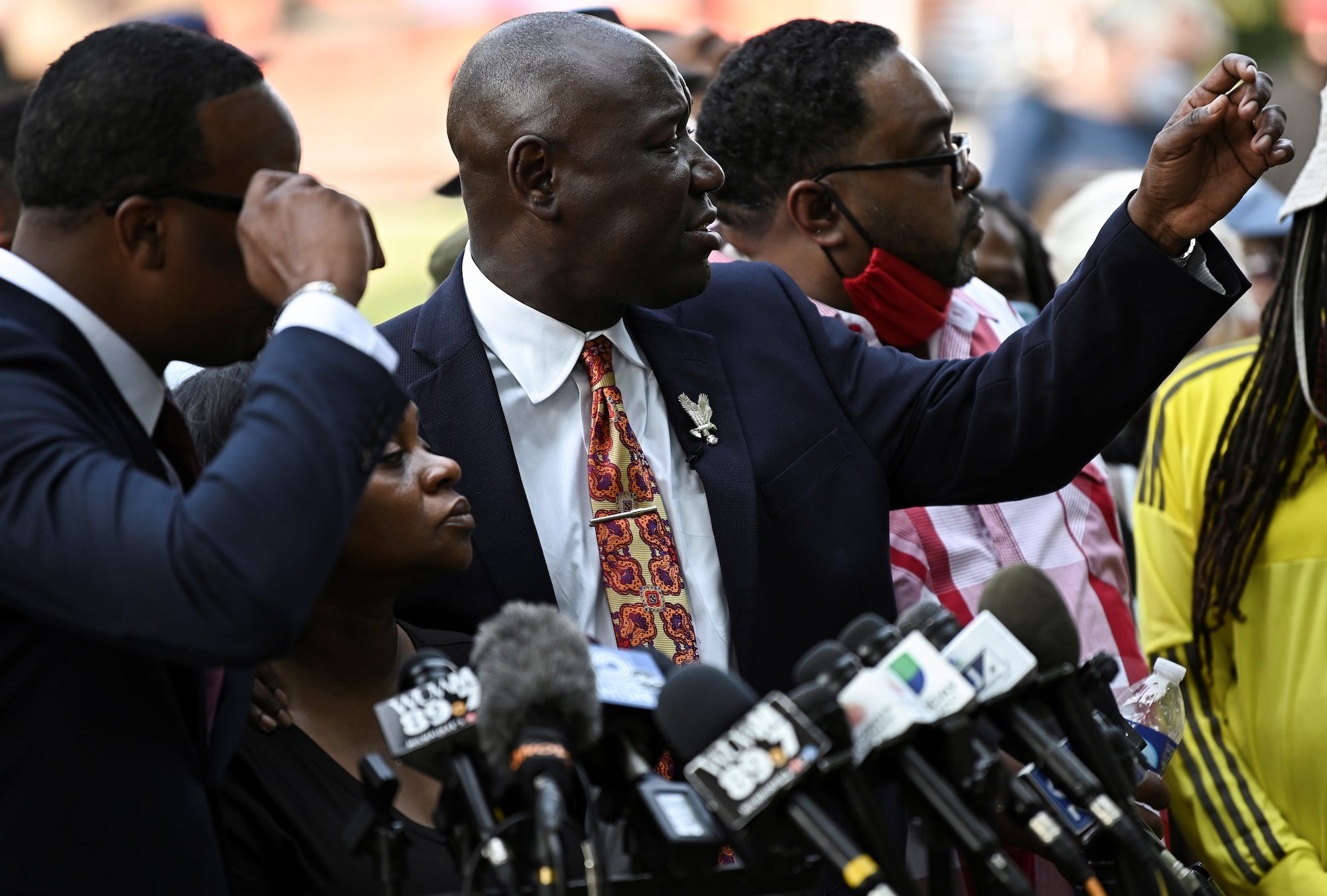 Reuters/Stephen MaturenAttorney Ben Crump speaks at a news conference with the family of Jacob Blake outside the Kenosha County Courthouse on August 25, 2020.

Benjamin Crump, the attorney representing Blake’s family, alluded on Tuesday to the mental health struggles the three young boys are already facing, and their long road ahead to recovery.

Already, supporters have donated $US1.3 million to a GoFundMe campaign in part to support Blake’s children and pay for grief counseling for the traumatized family members.

“These little boys, these three little boys are going to have psychological problems for the rest of their life,” Crump said at a news conference. “Can you imagine what his 8-year-old son who was celebrating his birthday is going to think about every time he has his birthday? The pain in his father. Can you imagine?”

He continued: “This is what we have to endure every day. Being profiled by the people who are supposed to protect us.”