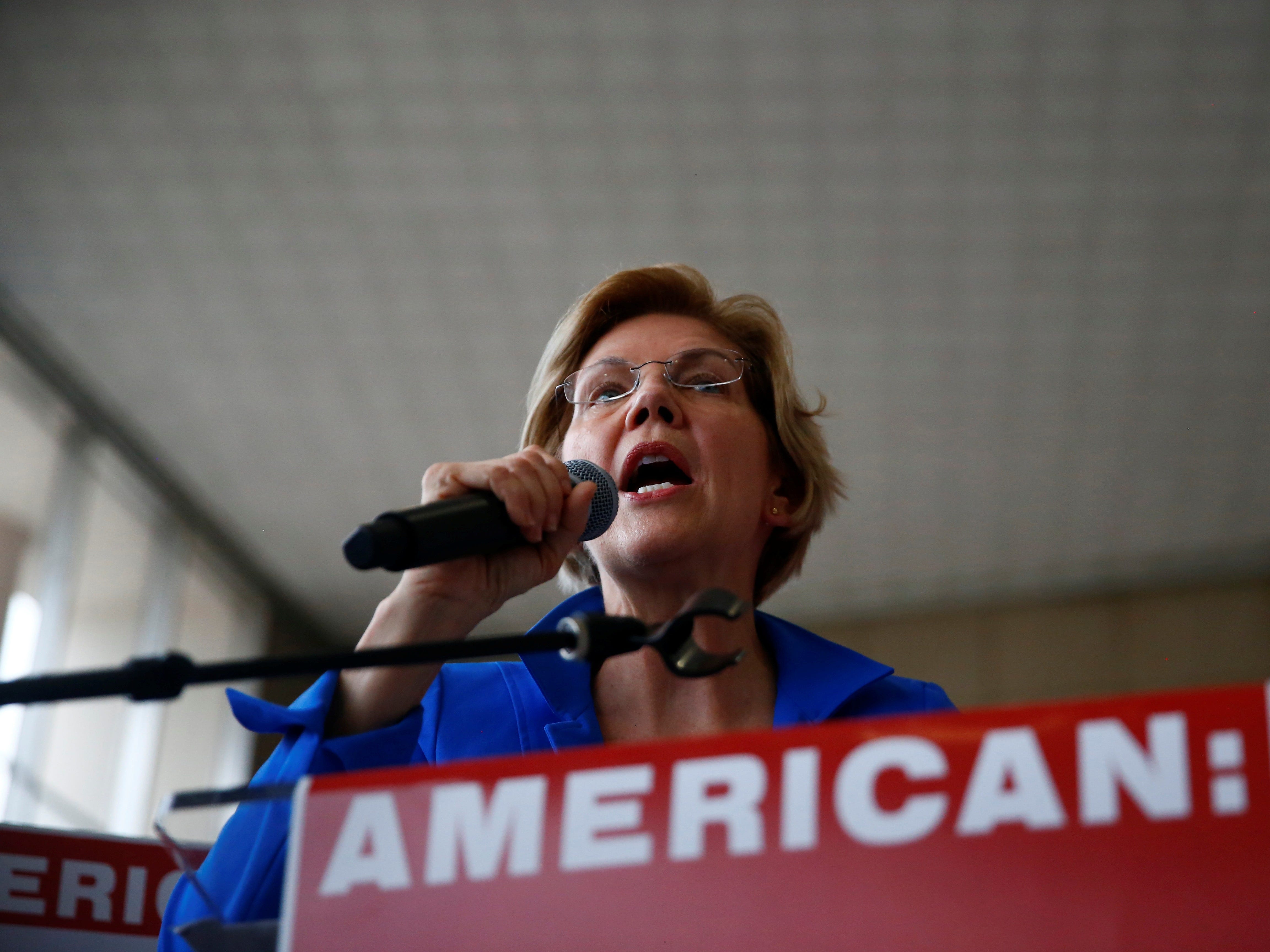 Eric Thayer/ReutersSen. Elizabeth Warren has been pushing for a wealth tax.

Sen. Elizabeth Warren has made it clear: She wants to tax the ultrawealthy.

It’s a measure that a majority of Americans support, and could bring in billions in tax revenue, but beyond the political will to make it law it faces several legal obstacles. Besides implementation concerns, it might not be allowed under the Constitution.

Warren is on the case. Her recent introduction of the Ultra-Millionaire Tax Act included two different letters from law professors, each detailing why they believe a wealth tax is constitutional. Overall, 14 professors signed the two letters.

This isn’t a new debate: When Warren proposed another version of a wealth tax during her presidential campaign, that received similar criticisms over constitutionality.

But since Warren’s campaign ended, the issue has only grown more urgent, as inequality has continued to balloon during a deadly pandemic in which American billionaires have added over $US1 ($1) billion to their net worths and vulnerable low-wage workers have increasingly been left behind. Warren referred Insider to her remarks from the Monday press conference where she spoke about the bill, and the law professors’ letters.

Five of the law professors who signed the letters to Warren spoke to Insider about why the tax is constitutional, and two others spoke out about how it just won’t be allowed under current law.

What it comes down to, as with so many legal debates of the 21st century, is whether you look at the Constitution as something that is sacrosanct and untouchable or something more improvised and imperfect.

Why ‘direct tax’ is a key phrase

The Constitution says a few different things about taxes, but of particular note here is the creation of a “direct tax.”

“Direct taxes” must be apportioned by states’ populations (similar to how many representatives a state gets, based on population). So while Congress broadly has the power to enact taxes, all direct taxes need to be apportioned.

In the wealth tax debate, “a lot turns on” what actually is a direct tax, according to John Brooks, a professor of law at Georgetown University Law Center and a letter-signer.

Specifically, there’s the question of whether a wealth tax is a direct tax.

Another signatory, professor Ari Glogower of the Ohio State University Moritz College of Law, told Insider that the broad taxing power established in the Constitution arose in the context of specific and narrow debate, and the apportionment clause “was added in that narrow context to achieve a compromise on these questions of representation in a way that was ambiguous. And that ambiguity was a feature and not a bug.”

So there’s some “ambiguity” over what is and is not a direct tax and subject to apportionment. Enter the horse-drawn carriages. Signatory Calvin Johnson, of the University of Texas at Austin School of Law, points to a tax that President George Washington enacted on horse-drawn carriages. That tax ended up in front of the Supreme Court – with Alexander Hamilton defending the government. Hamilton argued New York could have twice as many carriages as Virginia, which would make tax rates in Virginia twice as high under apportionment.

“The Supreme Court manipulated the definition of direct tax to say that a tax on carriages was not direct and did not have to be apportioned,” Johnson said. The carriage, said Brooks, is an example of how “there are a lot of things that are essentially taxes on the value of property that the court has said are not direct taxes.”

Some have also drawn parallels between a wealth tax and an income tax. But that’s a bit knotty, too: While the Supreme Court upheld an income tax in 1880, another case added a wrinkle in 1895. The decision in Pollock v. Farmers Loan and Trust Company struck down an income tax, saying it was a direct tax that hadn’t been apportioned.

Ultimately, that was overturned by the 16th Amendment: “The Congress shall have power to lay and collect taxes on incomes, from whatever source derived, without apportionment among the several States, and without regard to any census or enumeration.”

But Pollock still lingers in today’s discourse, according to Johnson, who said it’s “reflecting at least the lawyers’ arguments to argue that a wealth tax is unconstitutional as well. They’re all children of Pollock, all of these arguments.”

Another signatory, Brian Galle of Georgetown University Law Center, told Insider that he argued in an amicus brief for that case that the Affordable Care Act was constitutional as an exercise of Congress’ power to lay and collect taxes – and he said the Supreme Court agreed with him.

“What I said in the article I wrote before we argued to the Supreme Court was, ‘Look, this direct tax thing was just kind of a placeholder compromise,'” Galle said. It was arrived at “in order to get everyone to agree to sign on to the Constitution.” And, while many parts of the Constitution are “deeply meaningful” and intrinsic to America’s values, Galle said a direct tax “is not one of those provisions.” 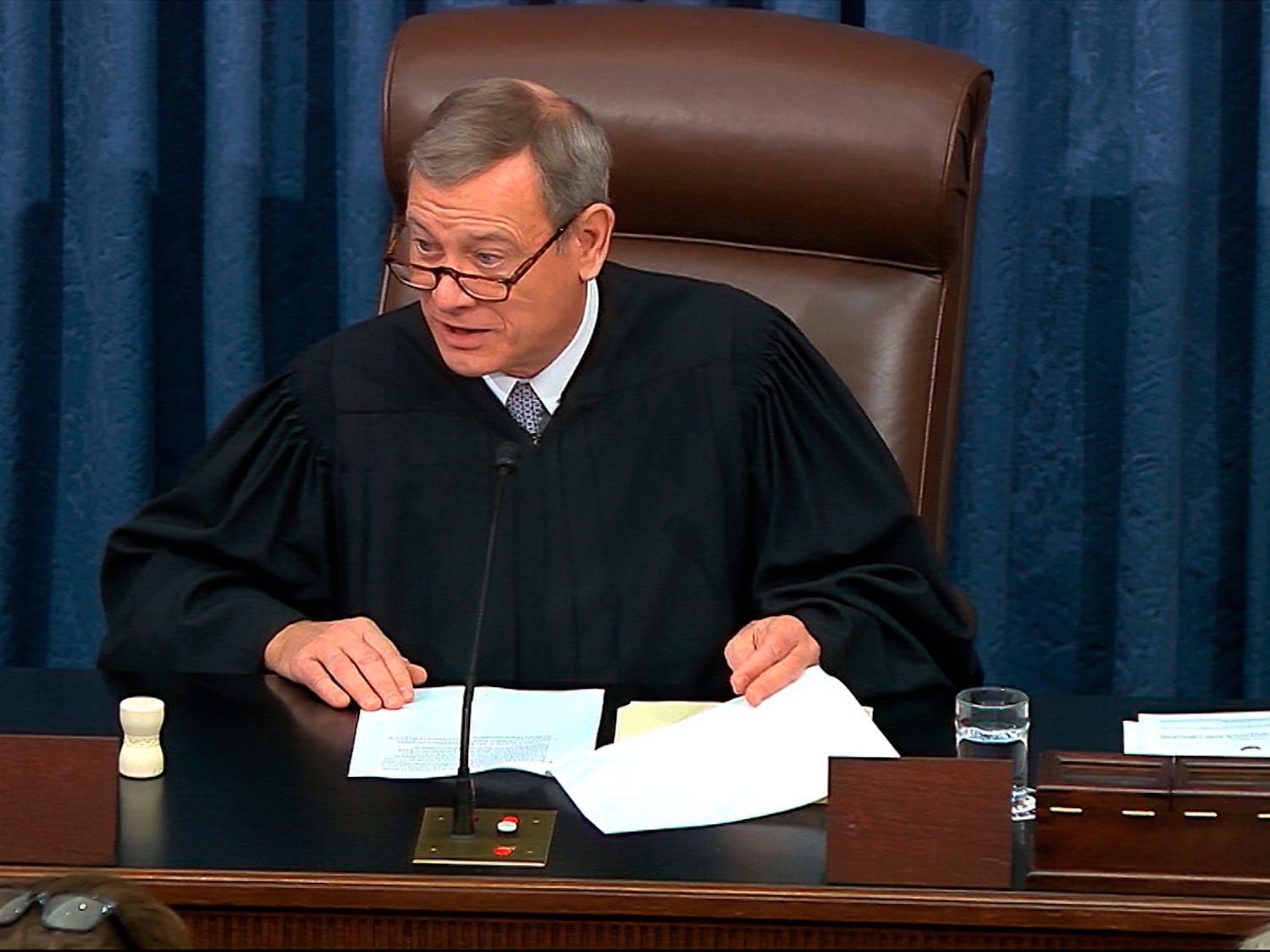 Senate Television via APIn this Feb. 3, 2020 file image from video, presiding officer Chief Justice of the United States John Roberts speaks as closing arguments in the impeachment trial against President Donald Trump begin in the Senate at the Capitol in Washington.

But the ruling around the Affordable Care Act is also notable to those who say a wealth tax isn’t constitutional.

“The chief justice wrote that – basically accepted the old understanding – that a tax on property of any sort is a direct tax,” said Erik Jensen, a professor at Case Western Reserve University School of Law, who has written and spoken about his belief that a wealth tax is a direct tax.

Jensen asked, “What is a tax on wealth other than a tax on property?”

He added: “I think everybody agrees that the founders thought a tax on real estate was a direct tax. And my interpretation of that is that real estate was the clearest measure of wealth at the time of the founding.”

Jensen said he thinks the Republican appointees who disagreed with Roberts’ conclusion “did not think that they should be having to rule on the direct tax question at that point at all, because the issue had not been fully briefed and argued.” But if they had, he said he thinks some would have expressed concerns about whether the individual mandate penalty was a direct tax.

Broadly, Jensen said, there aren’t an “awful lot” of law professors who completely agree with his stance, but a number have said it’s a “difficult” issue and wouldn’t be a constitutional “slam dunk.”

Professor Beverly Moran of Vanderbilt University told Insider she thinks “a wealth tax is a good idea” but the government is “not going to be able to just do it.” Moran, who has written on why a wealth tax may be unconstitutional, said it would be considered a direct tax, like an income tax, and the Constitution has a 16th Amendment because the Supreme Court previously rejected an attempt to do that.

Moran said she thinks litigation around a wealth tax would be similar to that surrounding the Affordable Care Act, and it would “take years and years to sort it out.” Such legal paradigm shifts have happened in the past, she noted, citing the previous reversal in the understanding of “separate but equal.”

Another signatory, Kent Greenfield, a professor at Boston College Law School, said the legal academy should get involved in matters like this. “Because I don’t think law professors should stay in their ivory towers, or any professor should stay in their ivy towers. I think we have an obligation and an opportunity to help advance the public debate around important things, whether it’d be about impeachment or the wealth tax.”