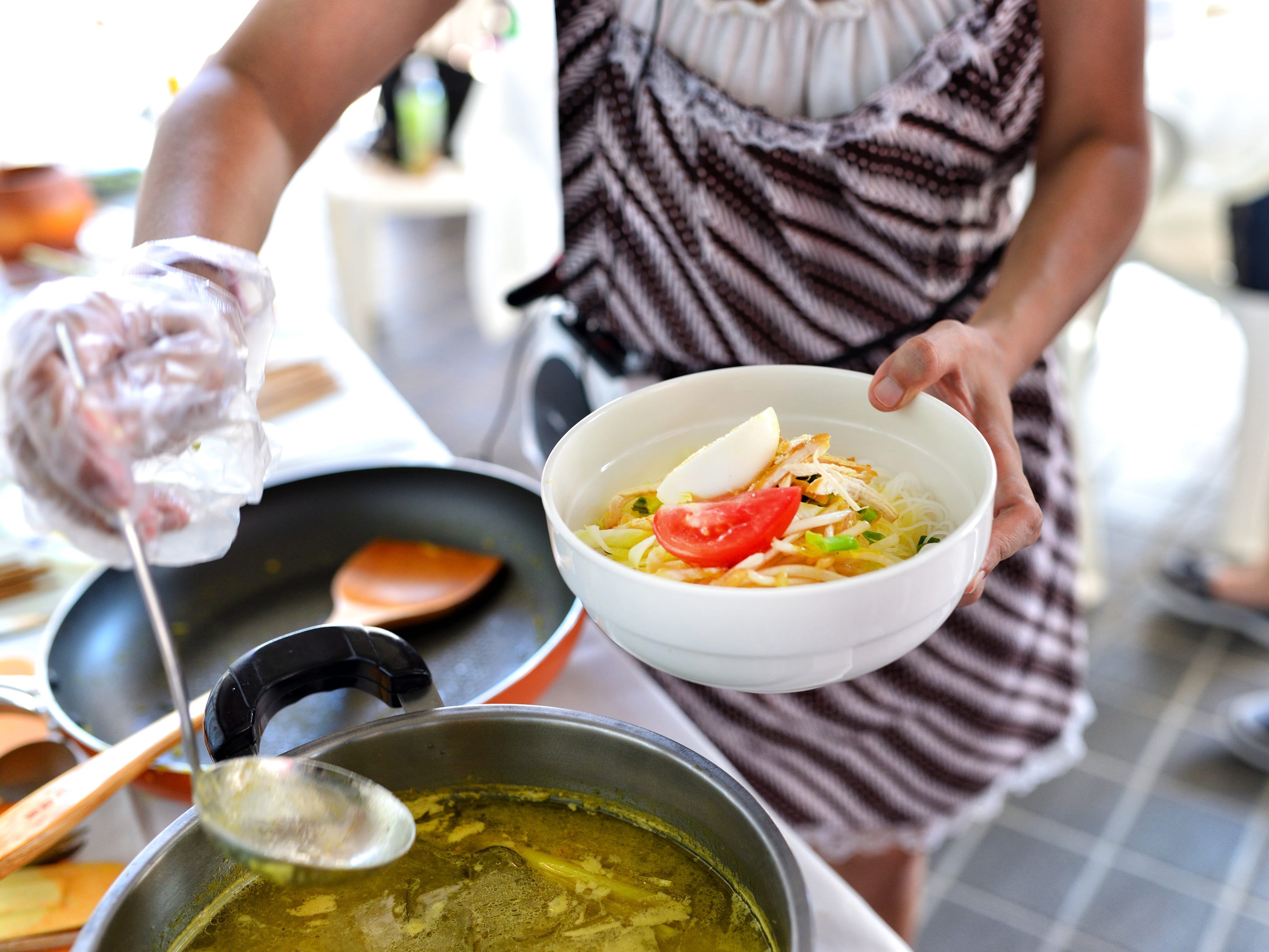 Whether you’re trying to kick a seasonal cold or just craving comfort food on a chilly day, chicken noodle soup may be the first meal you think of.

Chicken noodle soup originated in Southeast Asia, with people making it for at least 7,000 years. Even the Ancient Greeks had their own version of chicken broth that was believed to have healing properties.

But why is chicken noodle soup considered a go-to when you’re sick? And is it good for you? Indeed, chicken noodle soup is packed with a wide variety of nutrients â€” including protein, vegetables, and mineral-rich broth â€” that may prove helpful as your body fights off infection. That said, not all soups are created equal.

Experts agree that chicken noodle soup is a well-balanced meal that not only provides hydration, but also a wide variety of nutrients.

“A good-quality chicken noodle soup is nourishing because of the bone broth, vegetables, and protein-rich meat,” says Josh Axe, DC, a certified doctor of natural medicine and clinical nutritionist. “It’s packed with a range of macro- and micronutrients, including protein, fibre, B vitamins, vitamin C, amino acids, and more. It also contains powerful antioxidants and anti-inflammatory ingredients.”

Research suggests that chicken noodle soup may prove particularly beneficial when you’re sick. Some chicken noodle soups contain a compound called carnosine, which a small 2012 study found can prepare the immune system to fight the early stages of flu.

Not all chicken soups are created equal, though. The benefits of any bowl of chicken noodle soup depend on the particular recipe. Most recipes include the following ingredients â€” all of which have their own vitamins, minerals, and other nutrients to offer:

Chicken: The amount of protein in a soup can vary greatly depending on how much chicken is added â€” some canned varieties, like Campbell’s Condensed Chicken Noodle Soup,contain as little as 3 grams of protein per serving.

Protein is considered an essential nutrient for the growth and function of immune cells, which are responsible for releasing antibodies to defend you against harmful invaders like the common cold and flu.

Noodles: Carbohydrates in chicken noodle soup noodles are broken down into glucose and are the primary source of fuel used by your muscles, brain, and other organs. Hence, Chiara Jorristma, a registered dietician at Yale New Haven Hospital, says the carbohydrates in noodles can provide much-needed immediate energy for your body when it’s fighting off an infection.

There is a difference, however, between complex carbs and simple carbs. Axe notes that sprouted or whole-grain noodles have more fibre than noodles made from refined grains and can help you feel more satisfied and full. Additionally, since they take longer for your body to break down, they can deliver a more steady supply of energy without triggering a spike in blood sugar.

Broth: It’s no secret that you should drink plenty of fluids when you’re sick â€” and according to Jorristma, the broth can help you stay hydrated. When you’re congested, staying hydrated is particularly important because it can help to thin out mucus, thus helping to drain your sinuses more easily.

Axe says bone broth is also rich in nutrients, including collagen, gelatin, and glycine, which help to protect and nourish the gut lining, improve joint function, and regulate the immune system.

“The most beneficial soups will be made with bone broth that has a long cooking time,” he tells Insider. Axe says bone broth or stock should cook for at least four hours for maximum health benefits.

Jorge Moreno, MD, an internal medicine physician at Yale Medicine, adds that bone, chicken, and beef broth alike can be too high in sodium, so he recommends specifically seeking out a low-sodium option or diluting it with water.

Also, the steam alone from a piping hot bowl of soup may prove beneficial when you’re congested. The National Institutes of Health recommends inhaling steam two to four times a day when you’ve got a stuffy nose.

Vegetables: Vegetables contain a wide array of micronutrients, antioxidants, and fibre â€” all of which your body needs while it’s trying to recover from an infection. In fact, research indicates that eating a diet high in vegetables is a solid prevention strategy for fighting off illness and boosting your overall health. Here are some healthy veggies you may benefit from adding to your chicken noodle soup:

Overall, experts agree that making a batch at home is your best bet because the person making it can control the ingredients used to prepare the soup. Not only can you eliminate preservatives and limit the sodium content, but you can also add more vegetables and select high-quality ingredients, such as homemade bone broth, free-range chicken and whole-grain noodles.

“You want a recipe that keeps it simple and doesn’t include added sugars, salts or preservatives,” Moreno tells Insider. “And if you don’t recognise the names on the ingredient label, skip it.”

However, if you’re not up for making your own soup there are plenty of pre-prepared options. Here’s the nutritional breakdown for a 1-cup serving of popular chicken noodle soup brands including Campbell’s Progresso, and Annie’s Organic:

It’s worth noting that a widely recognised famous 2000 study published in the journal CHEST suggested that chicken soup may have anti-inflammatory properties, which can reduce activity in the upper respiratory tract that often causes symptoms associated with a cold. Researchers found that all soups used in the study had this same effect, regardless of whether they were homemade or store-bought.

How to shop for store-bought chicken noodle soups

When buying packaged chicken noodle soup, experts say there are a few things you’ll want to take note of on the nutrition label.

Sodium: The main issue with store-bought soups is that they tend to be loaded with sodium, says Axe.

The Dietary Guidelines for Americans recommend eating less than 2,300 mg of sodium per day â€” that’s about 766 mg per meal for three meals a day. So, if you’re watching your sodium intake, try to opt for chicken noodle soup products that don’t exceed 750 mg per serving.

“Excessive sodium intake can be particularly risky for those with high blood pressure or cardiac conditions such as congestive heart failure,” says Nate Favini, MD, Medical Lead of the preventive primary care practice Forward. “The big sodium load from chicken noodle soup can cause them to retain fluid, which accumulates in their lungs and makes it difficult to breathe.”BPA: Axe also advises looking for canned soups that specify they’re BPA-free. According to the Mayo Clinic, bisphenol A (BPA) can sometimes seep into food and beverages from containers that are made with it â€” and research has shown that exposure may cause negative health effects in fetuses, infants, and children. Additionally, research has suggested a possible link between BPA and increased blood pressure.

There are valid reasons why chicken noodle soup is a go-to meal when you’re under the weather, and this classic comfort meal can be healthy, depending on the recipe.

Chicken noodle soup offers a nutritious blend of protein, fibre, vitamins, minerals, and amino acids, many of which can support your immune system while you’re sick.

While homemade soup is your best bet for limiting your sodium intake, experts say you can still choose a healthy store-bought version. The key is to select one that has minimal sodium, at least several different kinds of vegetables, and no potentially harmful additives in the soup or can lining. Overall, experts say that the fewer the ingredients, the better.