How Many iPhones Apple Will Sell Around The World

In my last post, we had estimated 150-170 million global iPhone sales over the next four quarters, based on the impact of the last three iPhone launches on QoQ growth patterns.

Now, let’s use the same methodology to reach a realistic sales estimate for the iPhone for each of Apple’s non-retail operating segments (regions), i.e. the Americas, Europe, Japan and APAC.

I received a lot of great feedback about my last post and readers were especially intrigued by the QoQ growth patterns around iPhone launches. Most readers also wanted a look at the iPhone’s historical shipments by region & model and a breakdown of QoQ growth patterns by region. So, let’s start with the former.

Historical iPhone Shipments by Model & Region
Since the iPhone’s average sales price (ASP) is fairly consistent across geographies, we can get a decent estimate of region-wise iPhone shipments, by looking at quarterly shipment figures and Apple’s revenue break-up by operating segment. Since the iPhone has grown very quickly to become the largest revenue driven for Apple, the shipment break-up by region should get more accurate for more recent launches (iPhone 4 & 4S). 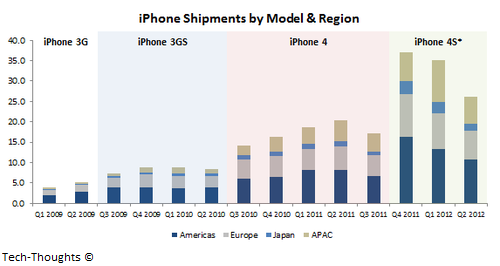 *Includes sales of lower priced iPhone 4 & iPhone 3GS
The chart above shows the iPhone’s staggering growth over the last couple of years, across regions. The sales by model also show that Phil Schiller’s testimony on iPhone sales was roughly accurate. But from our previous iPhone sales estimate, we also know that this pace of growth is not really sustainable.

Q4 iPhone Sales Estimate by Region
Apple’s revenue break-up by region has remained largely consistent over the last two iPhone launches and shouldn’t deviate by much for the iPhone 5 launch. Taking a 50 million sales estimate for global iPhone sales in Q4 as a base, we can get the following estimate by region: 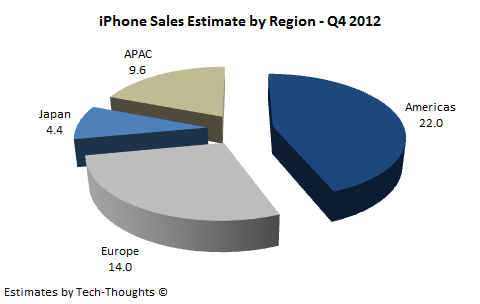 Since analyst estimates for weekend sales proved to be overly optimistic, it would make sense to revisit this once Apple reports its results for the next quarter (calendar Q3). Now, let’s dive in and take a look at the iPhone QoQ growth patterns and full year (calendar Q4 2012 to Q3 2012) estimates by region. Since we’ve based our region-wise analysis on Apple’s reported shipments and region-wise split, we would need to approximate shipments for sales. 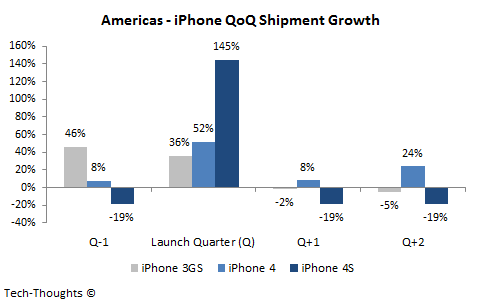 As expected, the Americas exhibit the same QoQ growth pattern as the global trends showed. With each successive iPhone launch, more demand is focused on the launch quarter and there is a significant decline in demand in successive quarters. As we saw in my last post, this is explained by the impact of rising smartphone penetration on the sales mix of the iPhone (more sales to current iPhone owners). The iPhone 4S launch drove greater than expected QoQ growth as Apple diversified into lower price points (on contract) for the first time, meeting a lot of pent-up demand.

Sales Estimate – Based on the Q4 sales estimate of 22 million units and the QoQ shipment growth trends above, Apple could sell 60-70 million units in the Americas, over the next four quarters. 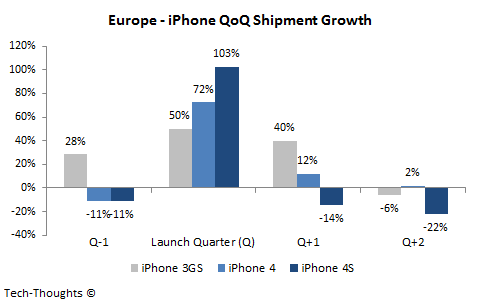 Europe exhibits a very similar QoQ growth pattern as seen in the US. This is because smartphone penetration in the 5 largest European markets – UK, France, Germany, Italy & Spain, is considerably high and comparable to the US. These 5 markets would also be responsible for the lion’s share of smartphone and iPhone sales in Europe.

Sales Estimate – Based on the Q4 sales estimate of 14 million units and the QoQ shipment growth trends above, Apple could sell 40-50 million units in Europe, over the next four quarters. 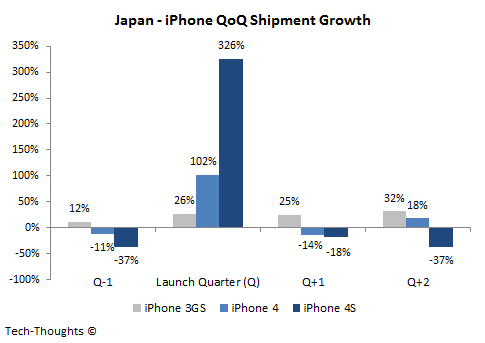 Here’s where things get interesting. Japan shows a very similar QoQ growth trend to that in the Americas and Europe, but the distinction here is that smartphone penetration in Japan is still only about 25%. So why is QoQ growth showing a declining post-launch trend with successive launches? The only reasonable explanation is that the iPhone’s sales mix (first-time vs. replacement purchases) is not just affected by smartphone penetration, but smartphone penetration among high-income/high-end consumers. These consumers also tend to adopt technology quicker than those at lower income levels, which also explains the greater than expected demand boost in the launch quarter. This also suggests that growth potential is limited, but we need a lot more data to confirm this hypothesis. We’ll see more implications of this particular aspect when we take a look at the APAC region.

Sales Estimate – Based on the Q4 sales estimate of 4.4 million units and the QoQ shipment growth trends above, Apple could sell 10-13 million units in Japan, over the next four quarters. 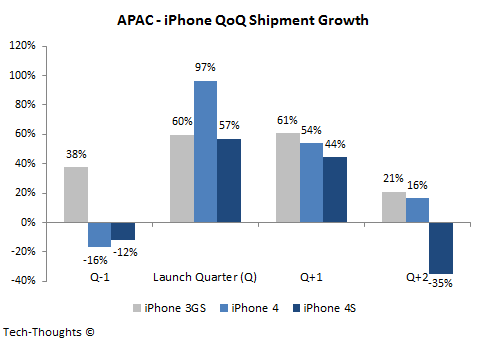 APAC is the lone region that deviates from the global QoQ growth pattern, but the explanation is far simpler than it seems. The APAC region includes two major markets for Apple, i.e. China & Australia. While Apple launches a new iPhone in Australia in the same quarter as other major markets (US, Europe, Japan, etc.), the China launch is always in the following quarter, i.e. Q+1. This also explains the relatively depressed QoQ growth in the launch quarters, as strong growth in Australia is balanced out by weak or negative growth in China, in the launch quarter (Q) and vice versa for the following quarter (Q+1). Keeping this in mind, the QoQ growth patterns for APAC are actually remarkably similar to those exhibited in developed markets. The growth declines in other quarters lend credence to my hypothesis that the smartphone market geared towards high-income consumers is one that sees rapid growth and saturation (at least in Asian countries). This is also corroborated by numerous reports stating that emerging market growth is expected to be driven by sales of lower end smartphones. This means that the only real, major trigger for the iPhone in the APAC region is a deal with China Mobile.

Sales Estimate – Based on the Q4 sales estimate of 9.6 million units and the QoQ shipment growth trends above, Apple could sell anywhere between 35-45 million units in APAC, over the next four quarters. Any distortions caused by channel stuffing should be balanced out over a couple of quarters and shouldn’t affect the full year estimate.

Conclusion – The iPhone’s QoQ growth patterns are strikingly similar across regions and bring into question the scale of the iPhone’s growth potential in emerging markets. Based on these patterns, my full-year estimate is 60-70 million sales in the Americas, 40-50 million in Europe, 10-13 million in Japan and 35-45 million in the APAC region , totaling to about 150-170 million iPhone sales globally.

This article was originally published on Tech-Thoughts.net.