The 9 scariest moments from 'The Invisible Man,' ranked from most to least terrifying 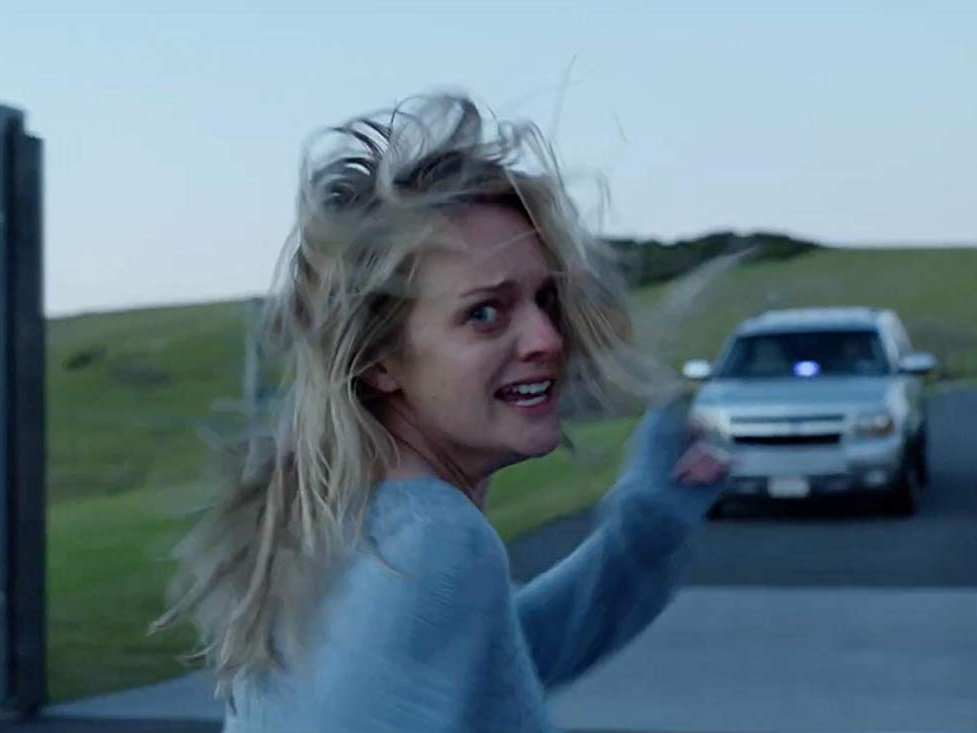 “The Invisible Man” premiered on Friday and is now the first hit horror movie of 2020. It received rave reviews from critics and even spawned numerous memes after its premiere last week.

The film focuses on Cecilia Kass (Elisabeth Moss), a woman desperate to leave her abusive ex named Adrian (Oliver Jackson-Cohen), who’s also a talented scientist. Barely escaping from the gigantic fortress of a home she shared with him, Cecilia tries to regain her sense of independence while living with a friend named James (Aldis Hodge) and his teenage daughter, Sydney (Storm Reid).

But after Adrian supposedly kills himself, things get much worse for Cecilia as it becomes abundantly clear that he’s still tormenting her – this time in his invisible suit.

“The Invisible Man” is filled with suspenseful and scary moments that will make you jump out of your seat, whether they involve a knife floating mysteriously in midair, or a strategically thrown can of paint.

9. Cecilia tracks Adrian’s phone to the attic of her house — and discovers recent pictures of her sleeping on the device. 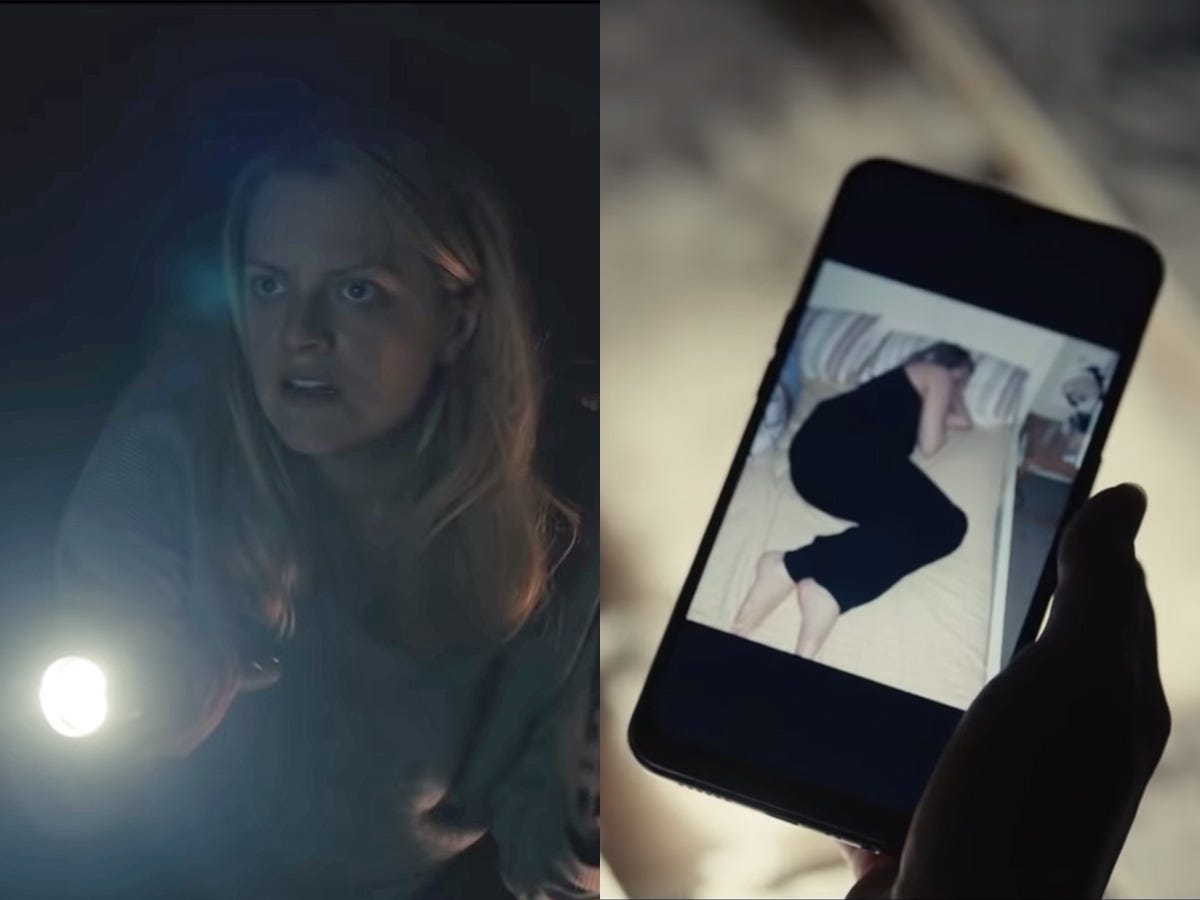 While this moment doesn’t quite compare to some of the film’s later, more terrifying moments, it’s still pretty creepy, especially considering how it happens.

As Cecilia is increasingly tormented by seemingly random events occurring at James’ house – such as her food catching fire while cooking, a knife disappearing, and her medicine that she lost on the night of her escape from Adrian mysteriously reappearing – she comes to the conclusion that Adrian is, in fact, still alive.

On a whim, she decides to call his cell phone – only to hear it buzzing above her in the attic. She climbs up to investigate and finds his cell phone, which is filled with recent pictures of her, taken while she was sleeping the night before. There’s also a text from an unknown number that simply reads “Surprise.”

It’s a heart-stopping moment, for sure, but considering what comes next, it’s not exactly terrifying – more like disturbing proof that Adrian has been watching Cecilia for a while, and will stop at nothing to control her.

8. A single handprint appears on the shower door behind Cecilia as she’s showering. 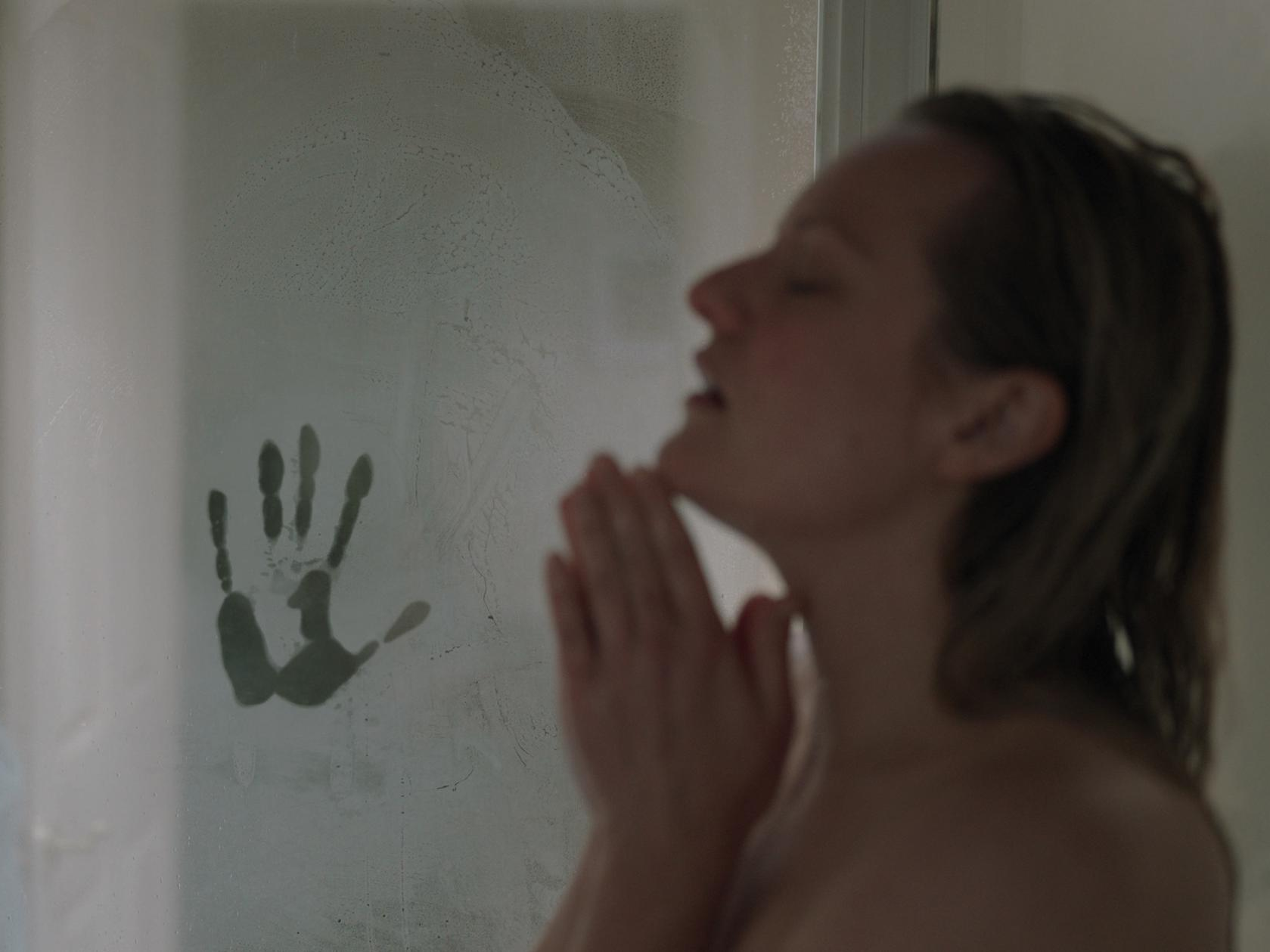 Showering after a job interview gone awry, Cecilia is blissfully unaware that someone’s standing right outside the shower door watching her and has even left a handprint in the steam.

When the handprint appeared on the door, numerous people in my theatre screamed out loud, proving that it doesn’t take much in this tense thriller to send chills down your spine. 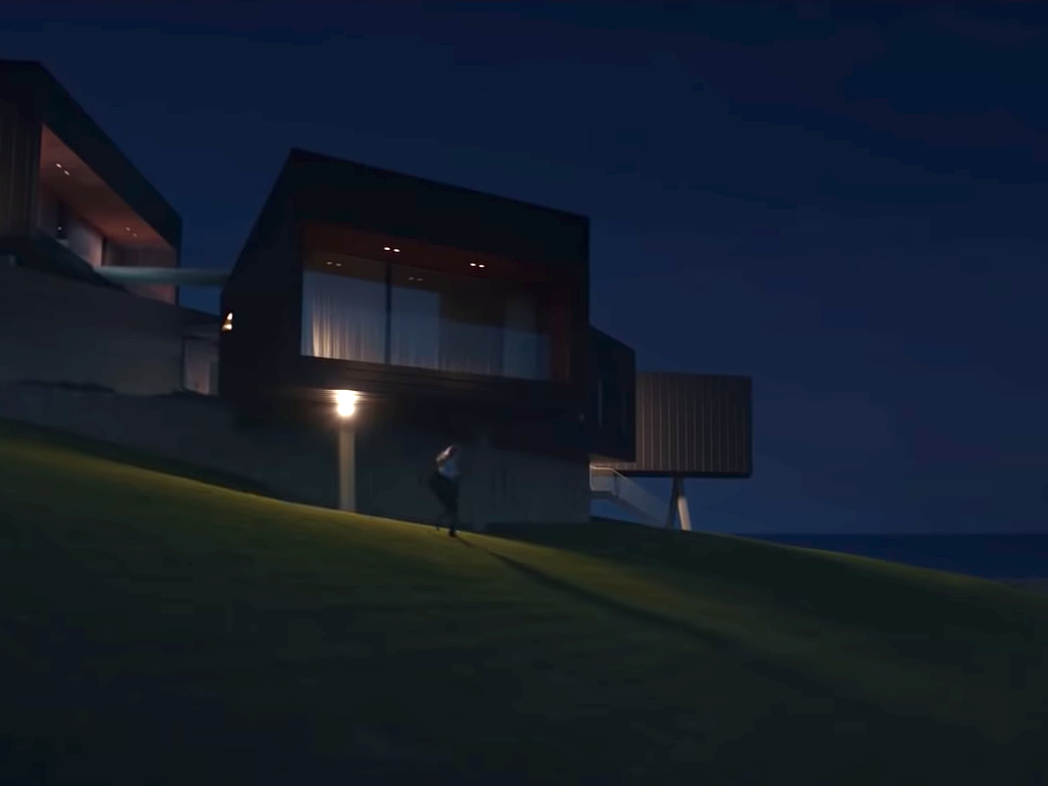 Universal PicturesCecilia (Elisabeth Moss) leaves Adrian’s home in the middle of the night.

The movie opens with Cecilia quietly fleeing the fortress-like home she shares with Adrian. Even though his abuse isn’t yet known, the fact that she has to tiptoe around, disable alarms and security cameras, and sneak out of the house points to a continued pattern of violence and intimidation. Coupled with the absolute look of terror Cecilia has on her face, it’s clear that her life with Adrian is a living hell.

Also, the sound design in this scene is impeccable. You could hear a pin drop as Cecilia silently gathers up her things and leaves, and when she knocks into a dog bowl (and later when the dog inadvertently sets off Adrian’s car alarm), the resulting sound is shatteringly, terrifyingly loud, clearly enough to wake Adrian and arouse his anger.

6. Adrian smashes his fist through Cecilia’s car window as she’s trying to escape with her sister. 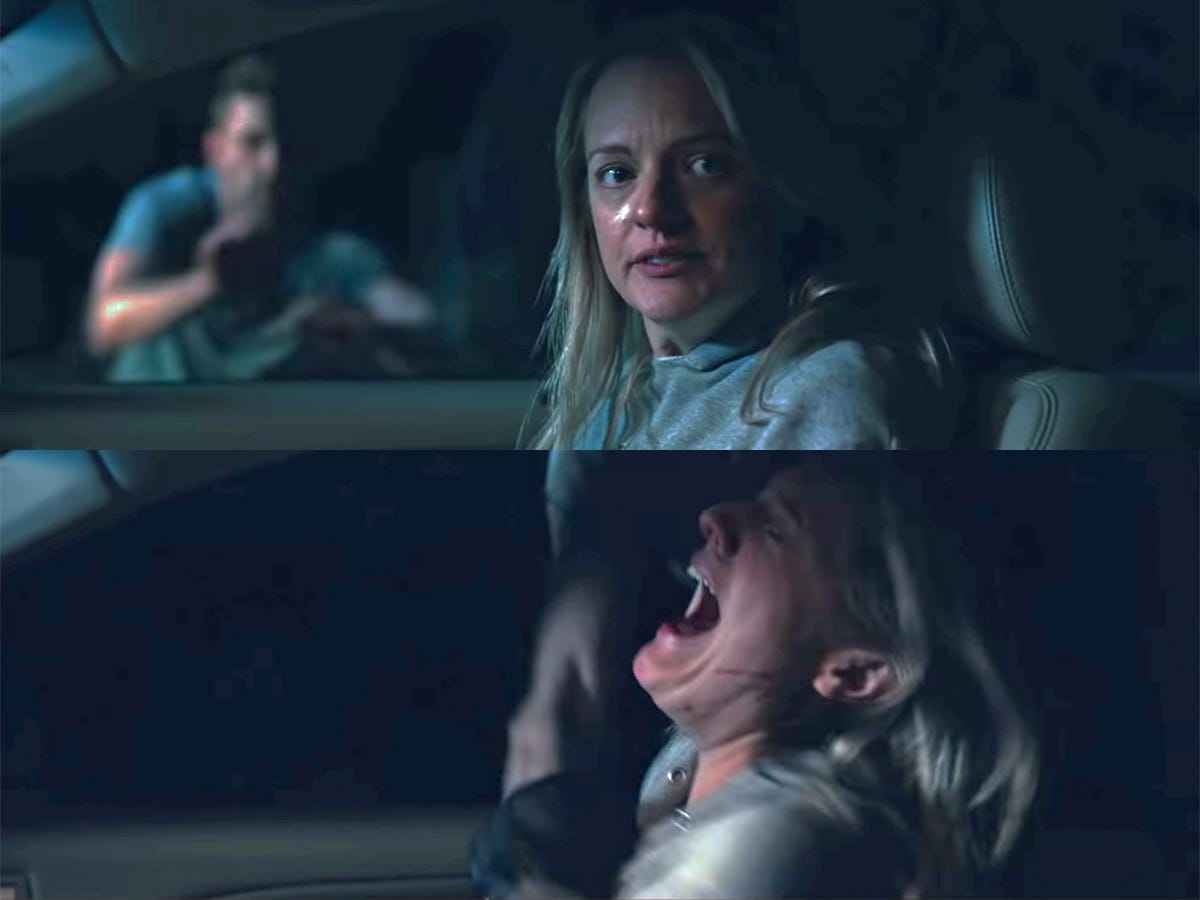 Universal PicturesCecilia (Elisabeth Moss) tries to escape in the first few scenes of ‘The Invisible Man.’

After managing to escape from Adrian’s fortress-like house, Cecilia is picked up by her sister, Emily. But before they can drive off, Adrian catches up with them and smashes his fist through the window to try and strangle her.

Luckily, Cecilia and Emily are able to drive off, but this moment is a violent reminder of Adrian’s pure rage and hatred towards Cecilia. It’s also a grim reminder of the violence real-life domestic abuse survivors have to grapple with.

It’s a scary moment for sure, and perhaps the only thing that causes it to be less frightening than later scenes is the fact that this is one of the first (and only) times we actually see Adrian’s face.

5. Cecilia finds out she’s pregnant with Adrian’s child midway through the movie. 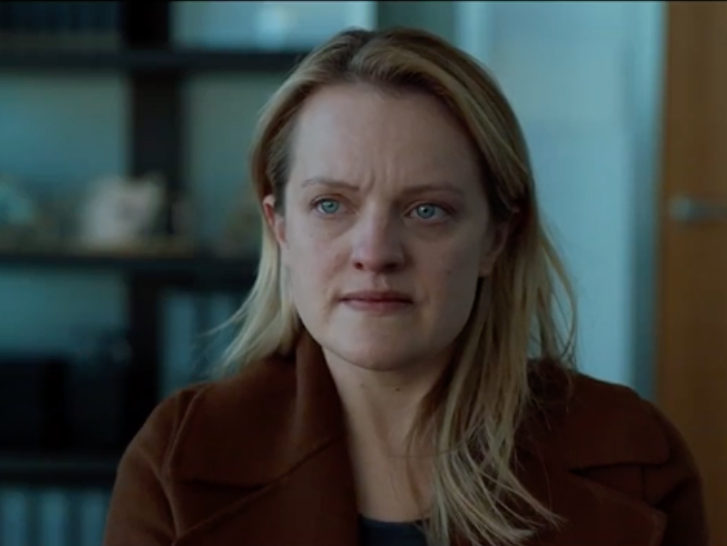 Blumhouse Productions/Universal PicturesCecilia (Elisabeth Moss) didn’t want to have a baby with her abusive partner.

In a truly nightmarish scene, Cecilia learns that she’s pregnant with Adrian’s baby despite taking birth control surreptitiously. During a meeting with Adrian’s lawyer Tom (who’s also his brother), Tom explains to Cecilia that Adrian had switched out Cecilia’s pills with something else, making them ineffective and therefore leaving her at risk for pregnancy.

Given the fact that Adrian is an abusive monster, it’s no wonder Cecilia is petrified upon learning that she’s pregnant. While it doesn’t involve an invisible suit or violent outbursts, this is one of the scenes that really, truly terrifies you – especially since it’s a reality many abused women face.

4. While Cecilia is sleeping, Adrian pulls the covers off of her bed to take pictures of her. 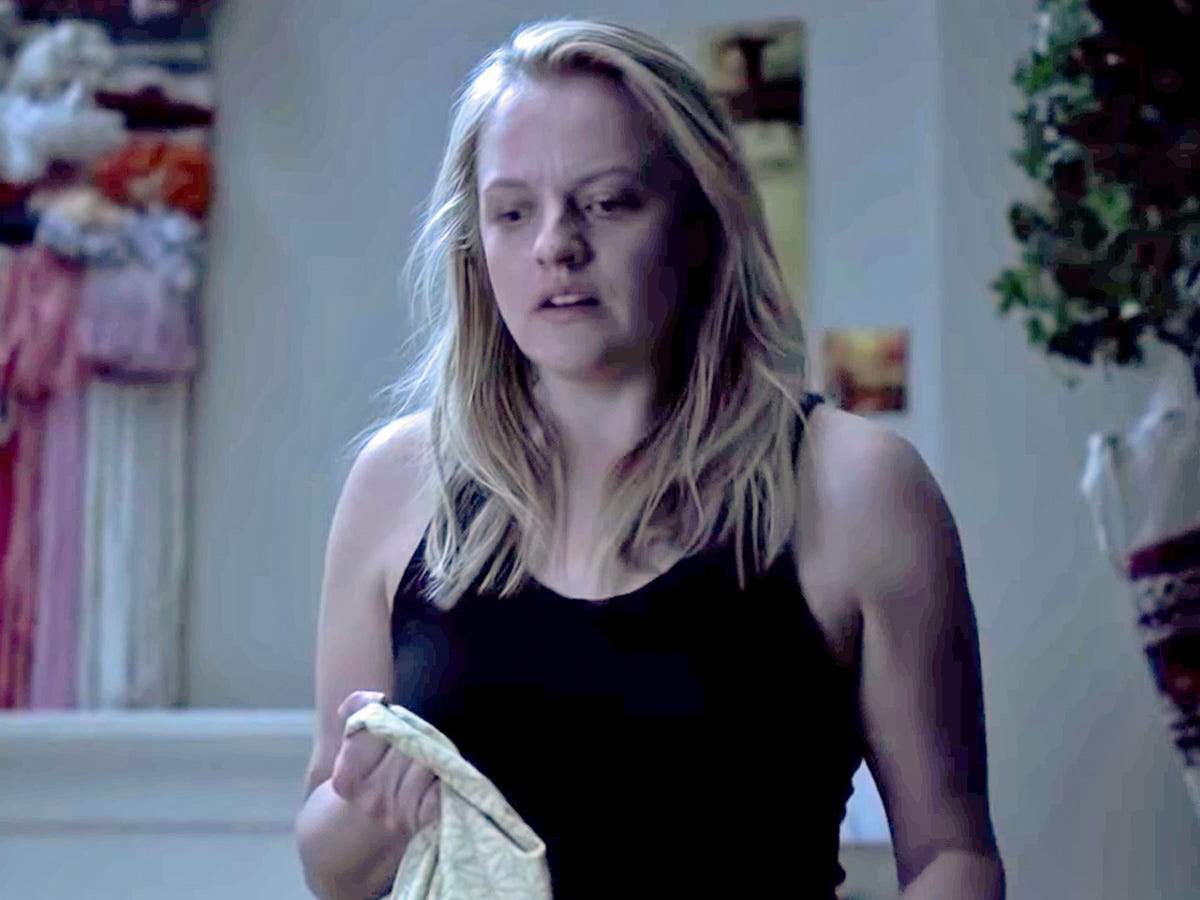 Universal PicturesCecilia (Elisabeth Moss) tries to escape Adrian by moving in with her friend.

After being disturbed in the middle of the night, Cecilia crawls into bed with Sydney only to be later awoken by Adrian as he slowly pulls the covers off of their bed, and takes creepy pictures of them sleeping.

Cecilia then wakes up and tries to pull the blankets back on the bed, only to be stopped by something she can’t see. As she gets out of bed to fix the sheets, a series of indentations appear on the blankets which are clearly Adrian’s footprints as he draws closer to her.

Eventually, he lets the covers go, but for a few terrifying seconds, it seems like he’s about to seriously hurt Cecilia and/or Sydney.

3. Cecilia goes to investigate a noise outside, but some very sinister water vapour makes it clear she’s not the only one on the porch. 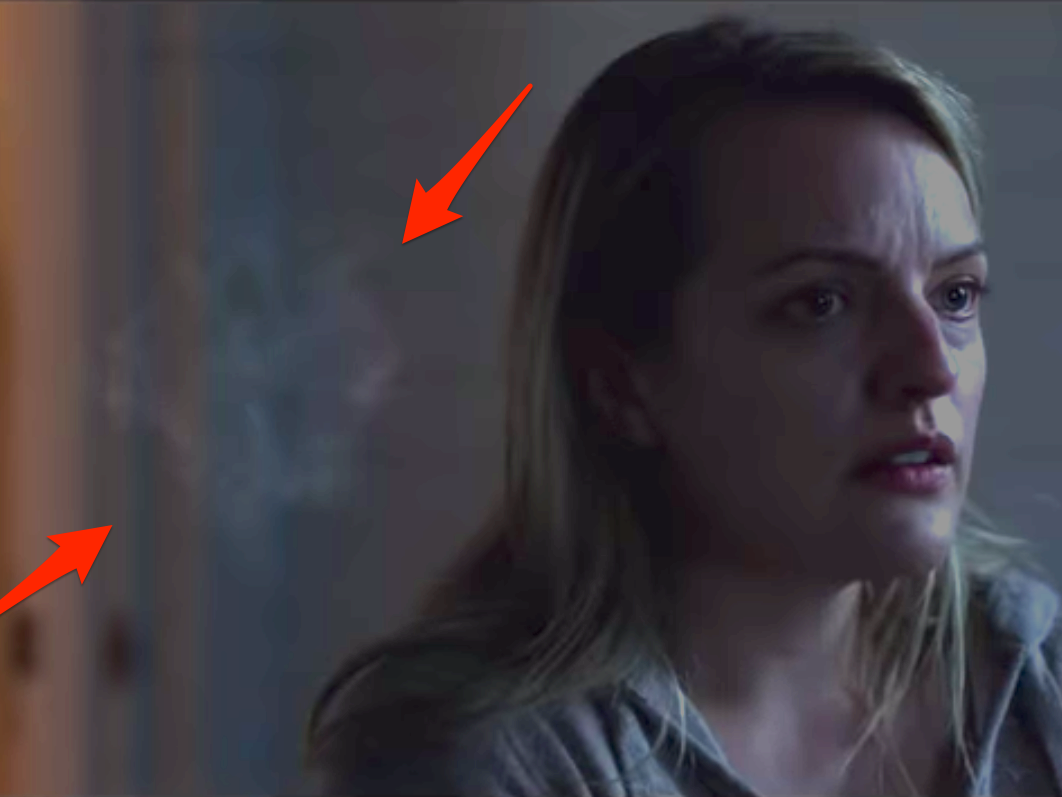 This is undoubtedly one of the movie’s most terrifying scenes, and for good reason. As she’s standing outside on the porch, Cecilia’s breath is visible in the cold night air. But also visible, right behind her, is water vapour from someone else’s breath – Adrian’s.

The sight of his breath, mere inches behind Cecilia’s back, caused some screams in my theatre, and even I was unsettled at how close he was to an unsuspecting Cecilia.

2. Cecilia throws a can of paint in Adrian’s direction so she can finally get a good look at him. 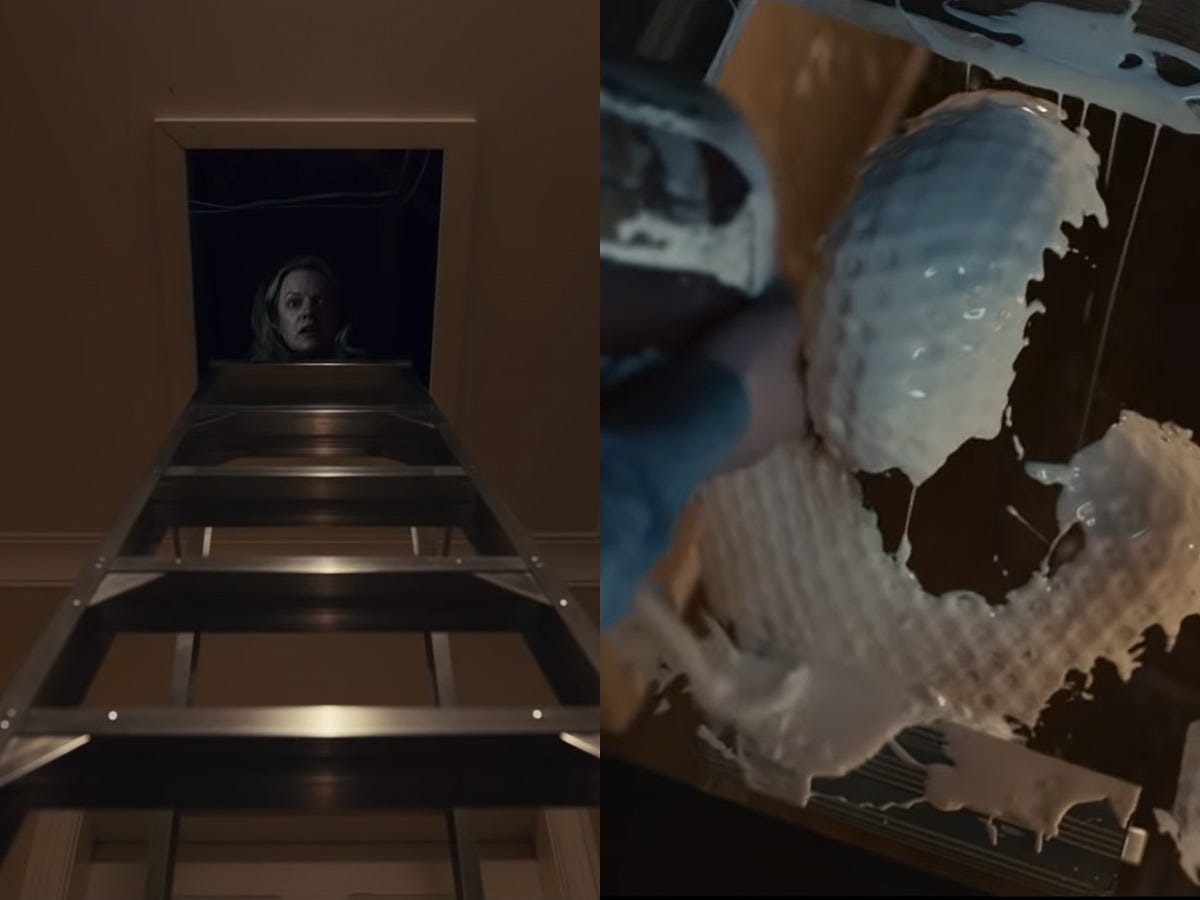 Universal PicturesAdrian (Oliver Jackson-Cohen) isn’t seen for most of the film.

Questioning her own sanity, and desperate to prove that Adrian is, in fact, invisible, Cecilia throws a bucket of paint on him after climbing up to the attic. But she doesn’t realise just how close her abuser is.

Maybe it’s because it’s the first good glimpse we get of Adrian in his invisible suit, but this moment is by far one of the scariest ones in the whole movie. It also allows us to fully take Cecilia’s side as she tries to escape from her abusive ex, even though it appears his torture is just getting started.

1. But the scariest moment comes after Adrian kills Cecilia’s sister in a packed restaurant and then makes it look like she did it. 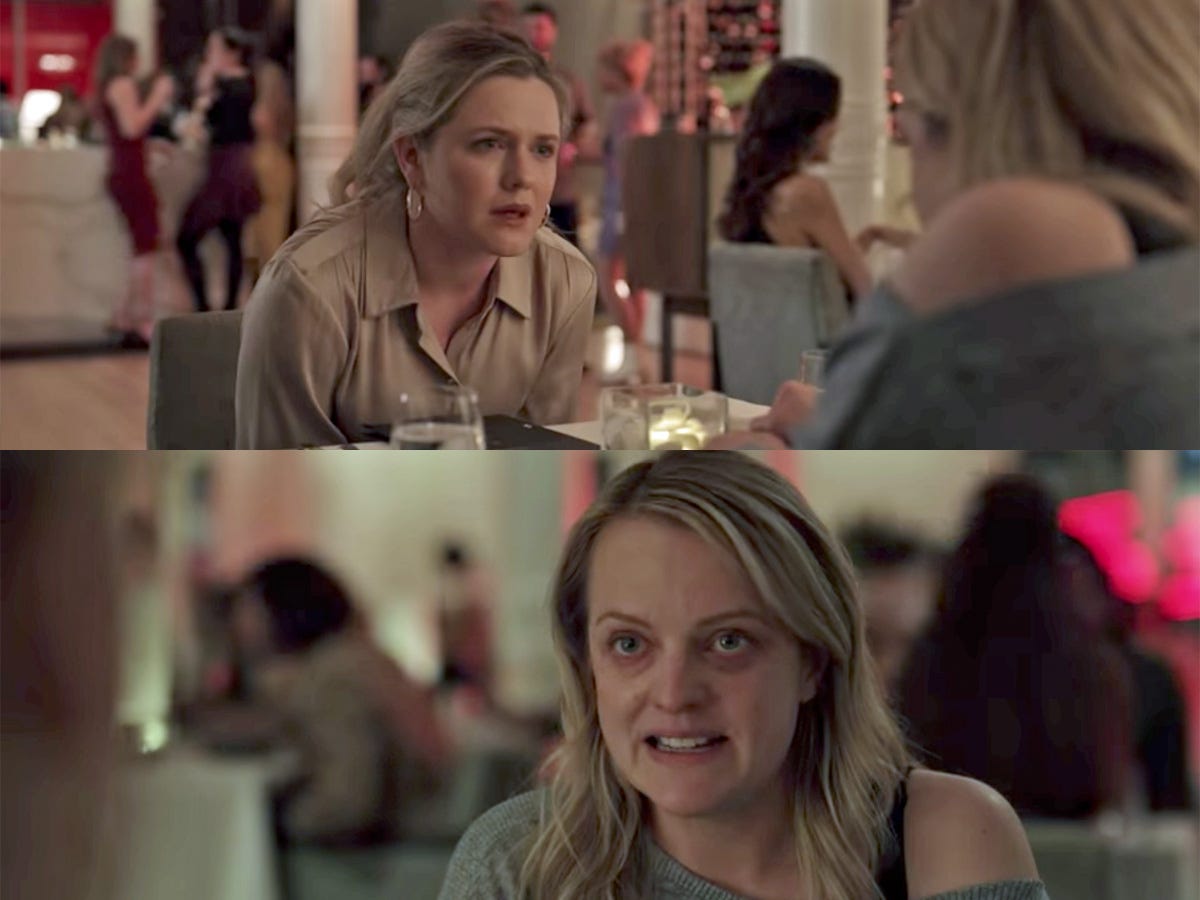 Universal PicturesThe scene between Cecilia (Elisabeth) and her sister (Harriet Dyer) at the restaurant is one of the scariest in the whole movie.

Dubbed “the restaurant scene” by fans on Twitter, this is by far the movie’s scariest moment, since it shows just how deranged and cruel Adrian can be.

As Cecilia and her sister Emily have dinner in a crowded restaurant, she tries to tell Emily the truth about Adrian, and how he’s managed to turn himself invisible. At first, the scene includes some moments of genuine humour when Emily shuts down a chatty waiter, but it quickly turns to chaos after Adrian sneaks up behind Cecilia and slits Emily’s throat with a large knife, subsequently placing the knife in a shocked Cecilia’s hand.

Considering the fact that Emily was Cecilia’s only remaining ally, this scene is even more terrifying. Adrian will stop at nothing to leave Cecilia alone, alienated, and desperate enough to come back to him.