This Is The Coolest Paper Aeroplane You'll Ever See This is no ordinary paper aeroplane.

It’s incredibly detailed, from the ultra-smooth nose down to the miniature seats he installed inside. Amazingly, Iaconi-Stewart isn’t an architect, though his project was inspired in part by a class he took in high school.

“We made ‘massing models’ from manila folders, which are rough 3D sketches of building ideas,” he said to Business Insider. “I took that concept one step further and started this crazy plane project. I wanted to see how far I could push the limits of the material (and the concept, I suppose).”

It’s still a work in progress. Though he took some time off during college, it’s been an incredibly time-consuming project: for one, it took an entire summer just to build the seats.

He just started work on the final components — the wings — and hopes to complete them over the summer.

Here's a time-lapse video that shows the design and construction process for the two cockpit seats. 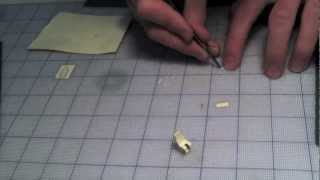 Now see what it's like to fly in a real one. I Finally Got To Try Lufthansa's 'Fully Flat Beds'! >>