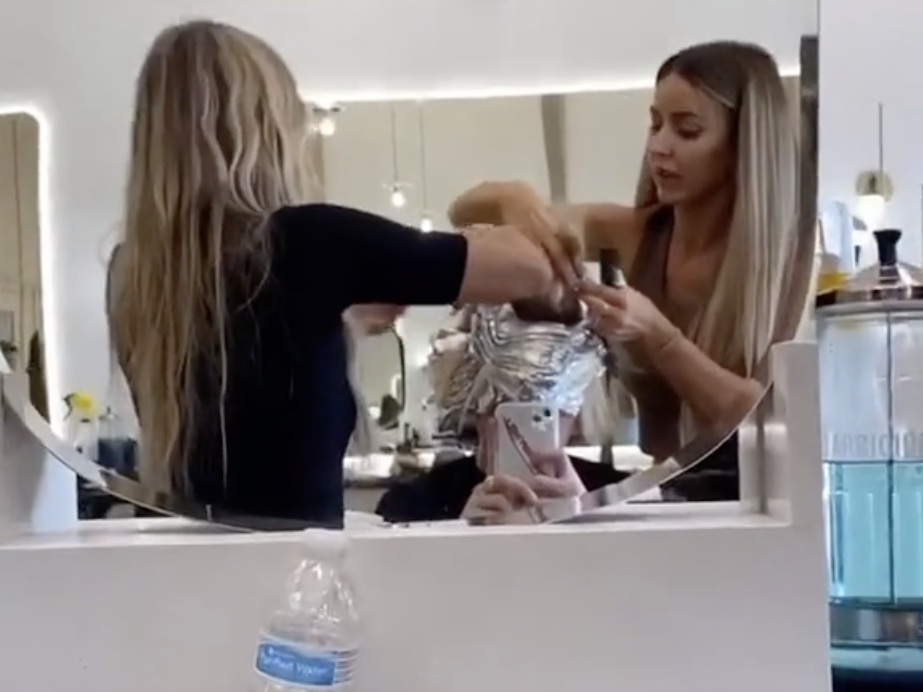 HairBy_Chrissy/TikTokTwo hairstylists at Habit Salon work with a client at the start of October.

A hair salon that’s popular among influencers is facing backlash after people noticed that it’s seemingly not requiring anyone to wear face masks.

Habit Salon is a set of hair-styling studios that have been offering haircuts, colour, and more since 1997, according to its Facebook page. It’s run by owner Chrissy Rasmussen, who often works with internet-famous clients at both her original Arizona salon and her newly opened location in Los Angeles, California.

Rasmussen is known as Hairby_Chrissy on TikTok. While it’s unclear if the account is run by the salon owner or another employee, the page often shares before-and-after videos of clients to more than 1.5 million followers.

In many of these videos, hairdressers, clients, and others in the salon are seen without masks. Rasmussen’s account shared this video of two stylists working with freelance videographer Trevor Caron on October 3.

Caron also shared his own video to TikTok, which shows at least 15 people â€” not including the videographer â€” in the salon at one time. While many faces are turned away from the camera, none of those that are shown can be seen wearing masks.

Caron did not immediately respond to Insider’s request for comment when asked about his experience at the salon. 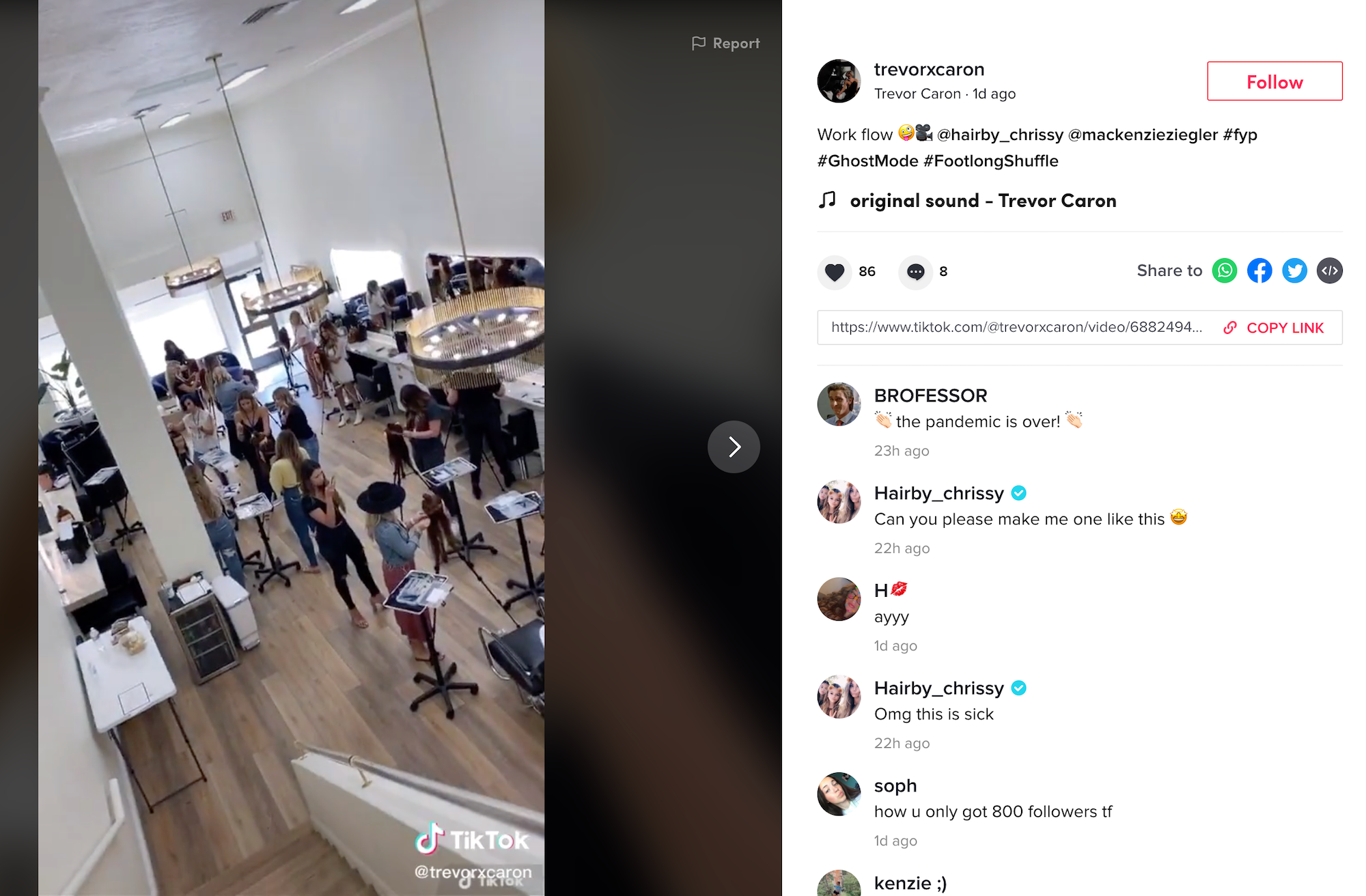 Videos like those that show Caron getting his hair coloured have been posted by the Hairby_Chrissy account throughout the coronavirus pandemic. Ones posted in July of this year â€” when COVID-19, the disease caused by the coronavirus, reached its peak in California â€” also show stylists, clients, and other visitors without masks.

In response to Rasmussen’s videos, numerous TikTok users have made satirical clips that show them wearing masks incorrectly and pretending to get their hair styled at her salon.

@abbylmillerOK but how does that salon get away with not wearing masks– isit not mandated anymoreü, ##hairbychrissy##lol##viral

Others have suggested that they’re going to report the salon for violating California’s mask mandate.

Masks are “now required statewide,” according to California’s COVID-19 website. Those in the state “must cover” their noses and mouths when outside the place they’re residing, as “wearing a mask or cloth face covering can slow the spread of COVID-19 by limiting the release of virus into the air,” according to the website.

@ho34poptartslike why tf cant anyone wear masks in there. and its in a placewhere masks are required. ##fyp##hairbychrissy##foryoupage##itdoesntevenlookgood

In recent days, the backlash has carried over to Twitter, where people have shared both memes and photos of hairstylists working without masks at Habit Salon.

The contact tracer assigned to all Hair by Chrissy related cases pic.twitter.com/kXilqNQCi1

Hair by Chrissy at it again in LA with her salon at full capacity, no masks or social distancing and not a hand sanitizer in sight! pic.twitter.com/0A3cAg3FWe

Recent reviews on Habit Salon’s Yelp page also criticise the location for not enforcing mask rules, though it’s unclear if the reviewers have actually visited the salon, or have written their comments after seeing videos online. The reviews were written by users that say they are located across the US, despite Habit Salon being in Arizona and California.

At the time of writing, an “Unusual Activity Alert” pops up on the salon’s page before you can read any reviews. It warns that the business has “recently received increased public attention, which often means people come to this page to post their views on the news.”

“While we don’t take a stand one way or the other when it comes to this incident, we’ve temporarily disabled the posting of content to this page as we work to investigate the content you see here reflects actual consumer experiences rather than the recent events,” Yelp’s statement continues.

Yelp did not immediately respond to Insider’s request for comment about Habit Salon’s page. 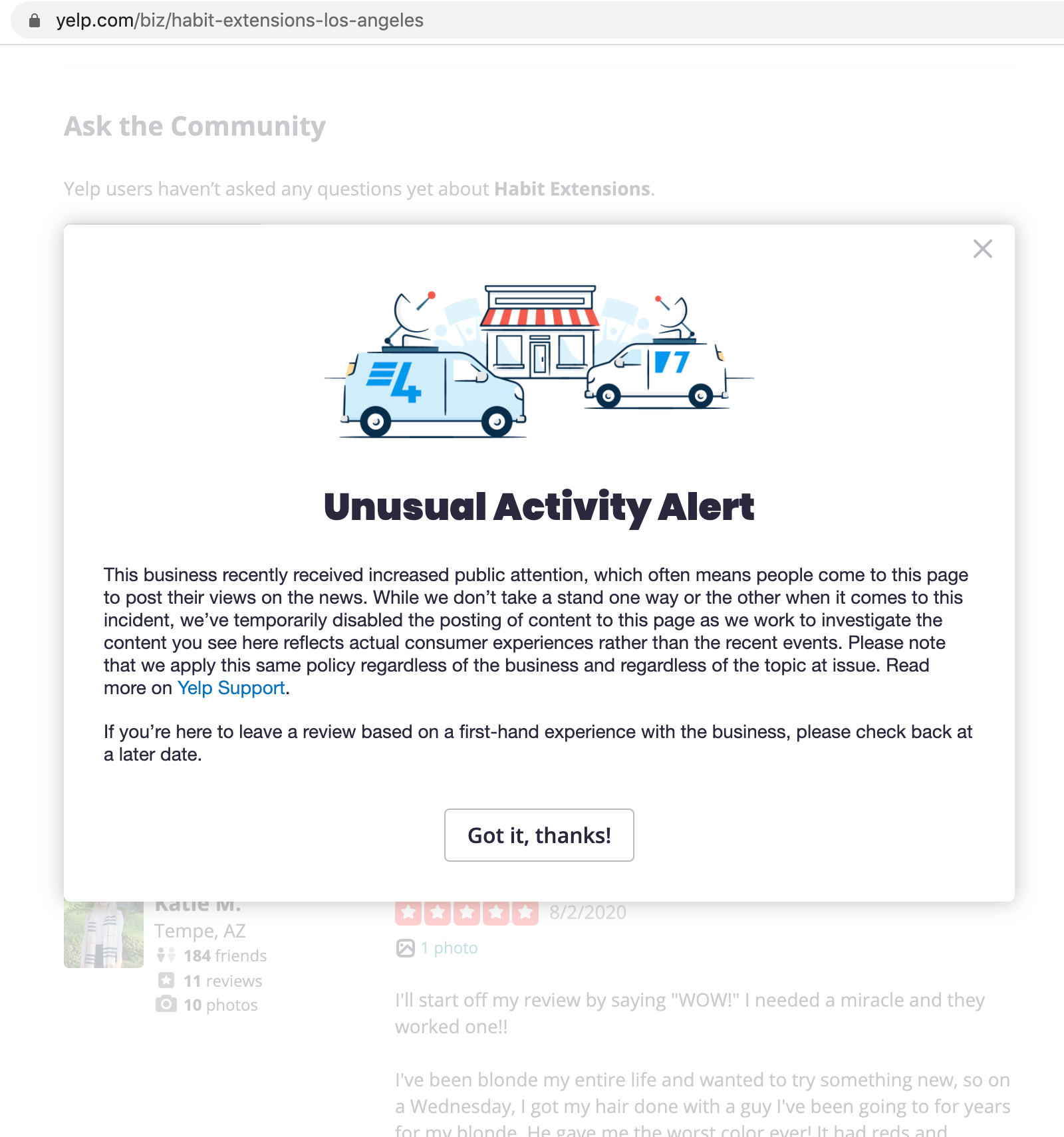 Habit Salon has seemingly acknowledged the backlash on TikTok

Though Habit Salon and Rasmussen have not recently made any public comments on the lack of masks in their videos, they have seemingly acknowledged the backlash they have received.

On Twitter, one user pointed out that the Hairby_Chrissy TikTok account liked comments underneath their videos that sarcastically said “I love your mask,” among others.

On Tuesday, the Hairby_Chrissy TikTok account also posted a video that includes a slideshow of client photos with audio that says “if you can’t say something nice, don’t say nothin’ at all” in a child’s voice.

While numerous videos posted this week continue to show people without masks in the Los Angeles salon, at least one video includes a hairstylist wearing a mask, albeit below her nose.

California’s COVID-19 website advises those in California not to wear their masks under their noses or on their chins: “A mask is only effective if it covers both ways you breathe.”

In addition to California’s mask mandate, the state’s governor Gavin Newsom has been outspoken about masks throughout the pandemic. On June 19, he urged Californians to “do your part” and “wear your mask.” The message is still pinned to the top of his Twitter account.

REMINDER: CA, you are now REQUIRED to wear a mask in public spaces.

We’re seeing too many people with faces uncovered. Wearing a face covering is critical for keeping people safe and healthy, keeping businesses open and getting people back to work.

Do your part. Wear your mask.

There are numerous risks that come with not wearing masks at a hair salon, according to an infectious disease expert

Dr. William Schaffner is a professor of infectious diseases at the Vanderbilt University School of Medicine in Nashville, Tennessee. Speaking to Insider, Schaffner said that people standing close together without wearing masks is “of course discouraged.”

He mentioned that restaurants, stores, and other places of public gatherings have found ways to protect people in recent months, so hair salons should be able to take similar measures. Schaffner said some ways to do so would be to have all clients and employees wear masks, and possibly close some styling stations to allow for social distancing.

Ultimately, anyone in “close contact in confined spaces for prolonged periods of time” should be wearing a mask, according to Schaffner, who added: “Prolonged is defined as more than 15 minutes, and it takes longer than 15 minutes to get your hair done.”

The risk of spreading COVID-19 could rise even higher if Habit Salon’s hairstylists or clients are travelling, especially through public transportation.

“If you travel by car, you’re in control of your environment,” Schaffner said. “But if you’re going by air, train, or other mode of public transportation, that increases the risk.”

Another dangerous aspect of Habit Salon not enforcing mask rules is that many of its clients are internet-famous stars, like TikToker Dixie D’Amelio and YouTuber Rosanna Pansino. Schaffner said images of these celebrities without masks in public could send the wrong message.

“It’s bad modelling,” Schaffner said. “People will watch that and say, ‘Gee, if they’re out there being carefree or even careless, why can’t I?'”

“They should be going the extra mile to model really good behaviour for their own health and for the interest of people around them,” he said of such influencers. “I know someone is going to say, ‘Oh these are young people. They’re less severely infected.’ Well on occasion, they are, and actually hospitalisation rates among young adults has gone up strikingly in the last several months.”

“Every once in a while, this virus can find a young adult who’s perfectly healthy and put them in the intensive care unit,” Schaffner said. “You can also be a dreaded spreader. You can spread the virus to others who will, as a consequence, become seriously ill, because they’re older or have diabetes or some heart disease. You don’t even know you’re spreading this virus because you can have minimal or no symptoms.”

Schaffner added: “That’s the whole concept behind all of us having to be prudent, careful, masked, and social distanced. This will be the new norm for months. We can’t turn this off like a light bulb.”

Representatives for Chrissy Rasmussen and Habit Salon did not immediately respond to Insider’s request for comment.