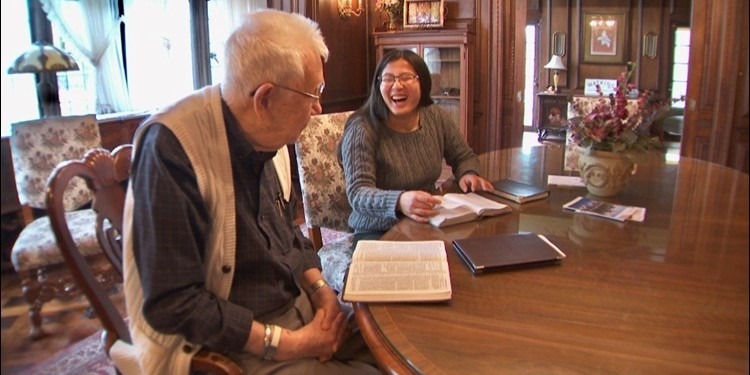 When Gabrielle Clutter was a senior at Drake University in Des Moines, Iowa, she would return home from classes, knock on her neighbour’s door, sit on the couch, and talk about her day. She and her neighbour would swap stories about friends, her opera program at school, and jobs they had worked.

But her neighbour wasn’t a fellow student. She was one of the dozens of senior citizens living in the elder care facility Clutter lived in for the last year and a half of her undergraduate studies, through an artist in residency program.

“I feel like it’s important to bridge those gaps, especially now when we’re so divided in the country. It was really cool for me,” Clutter told Insider of her time living at Deerfield, a continuing care community near Des Moines. As part of the residence, Clutter lived at the facility for free, but she had to regularly perform and take part in community programs.

Clutter, who’s now getting her masters’ degree at the Boston Conservatory at Berklee, is not the only college student living in a senior care home – similar programs have popped up across the country.

“They’re really proving to be win, win, win, very beneficial for both ages,” Donna Butts, the executive director of Generations United, a nonprofit that promotes intergenerational programs, policies, and strategies, told Insider. “With intergenerational programming, it helps older adults develop a sense of purpose. They’re giving back, they’re engaged, they’re stimulated by the interactions with younger people. And it also gives them hope for the future. For younger people, it really helps in terms of a sense of roots, history.”

More Americans are getting older

According to a 2016 study from Harvard University’s Joint Centre for Housing Studies, the number of Americans over 65 is expected to grow from 48 million to 79 million by 2035. By then, the research says, one in every three households will be headed by someone 65 or older. 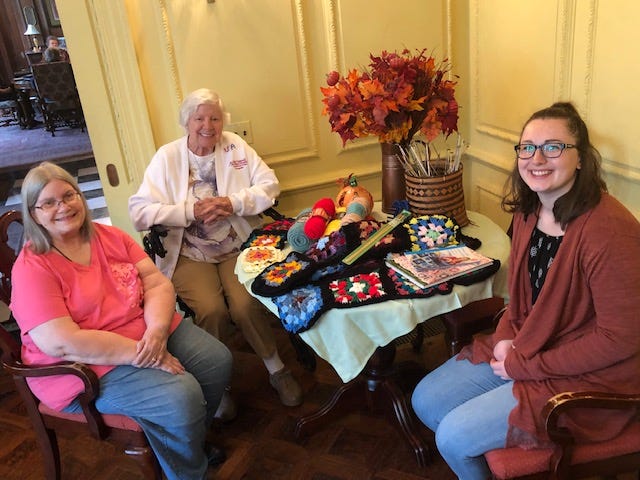 In countries in Eastern Europe and Asia, multigenerational housing within families has been standard for years.

It’s far less common in the United States, but the trend is growing: In 2018, Pew Research Centre reported that a record 64 million Americans, or 20% of the population, lived in multigenerational households.

Butts told Insider that intergenerational programs of all sorts, from bible study groups and a dual-generation Olympics, to living under the same roof, help people of all ages break down the stereotypes they have for one another.

“For older people, if all they’re doing is reading the news, or hearing about the latest effort to pit the generations against each other with ‘OK Boomer,’ it really helps to dispel the myth and misconceptions that all young people don’t care about anyone but themselves,” she said. “Because when you know somebody, when you see a face, when you connect with somebody, it’s an individual, it’s a person, it’s not this faceless mass of people.”

According to a 2017 stud called “Intergenerational Programming in Senior Housing: From Promise to Practice,” from Generations United and the Retirement Research Foundation, having older and younger generations under one roof serves several benefits. 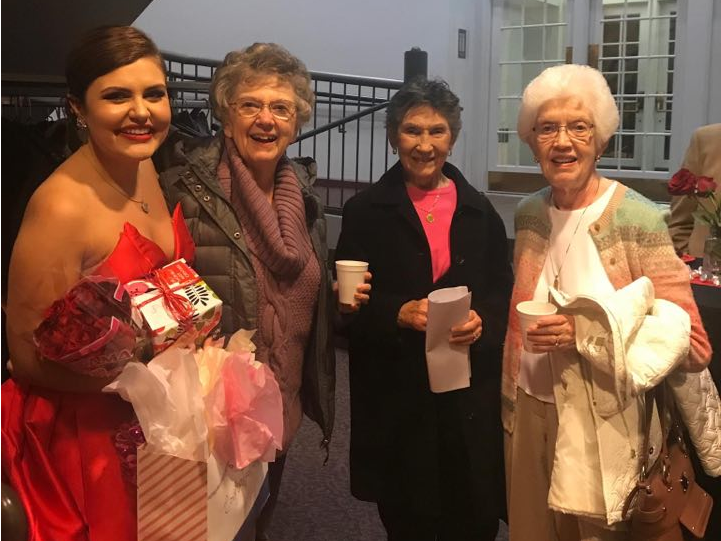 The study saw a decrease in loneliness, and increases in self-esteem, understanding of one another, trust, and sense of community among both generations when they interacted with each other.

“If we create natural opportunities where people can come together, I think that is the way that we can build connections,” she told Insider.

Sterbenz Barsness said that often when younger people interact with older generations, it’s seen as the younger person “helping” the older person – but it’s more of a “give-and-take” relationship, where both parties learn from each other.

“The earlier that we can normalize the experience of ageing as a part of life, I think that people will not only have a different perspective about their own ageing, but that they will generally see older people as just like them in society… so we’re not looking at older people as ‘the other,'” she said. 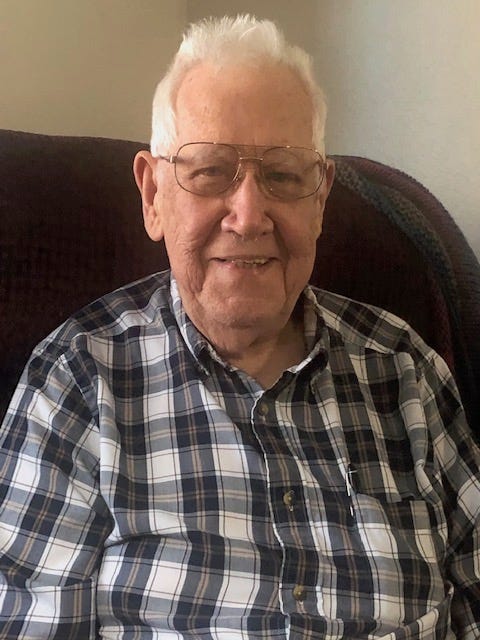 The University of Southern California has one of the oldest programs in the country, where students have been living in a retirement home near campus since 1986.

“The social benefits of shared housing between generations include reduced isolation and assistance with basic daily activities. However the financial benefits are of great importance too, for reducing costs of housing,” Caroline Cicero, of USC’s Leonard Davis School of Gerontology told Insider via email.

Cicero, like many other people Insider spoke to, said that intergenerational housing helps bring people together in a society that often puts walls between different generations.

“Society tries to separate us into disparate groups, but in fact, we do better together,” she said. “The younger person could help the older person connect through technology, shopping, basic chores, and one-on-one contact, and the older person offers a lifelong perspective and basic necessities such as food, shelter and affordable housing.”

Allen Thompson, an 89-year-old who lives at Watkins, an assisted living residence in Winona, Minnesota, called the new program at his facility, which allows students from close universities to live in empty rooms, “an answer to a prayer.”

He said the students are “delightful” – they help him with technology, talk to him about their goals, and always want to learn more.

“When I grew up, we had no electricity or running water or even a well. I remember our first radio, it ran on a battery, and when we got our first telephone, that was wonderful!” he told Insider via email. “Today they carry their phone in their pocket and can connect to anywhere in the world. To think what’s happening, it’s just fascinating.”

Diane Sheldon, another senior resident at Watkins, said she the students at the facility “don’t think of us as just old people,” and instead, add to the community more than she ever expected.

“They bring a little more hope and expectations for the future – it’s fun to learn what the younger generation is thinking and about their ideas. They add a vitality around here,” she told Insider over email.

Clutter and Laura Jensen, who is a student living at the Watkins assisted living residence, both told Insider that their apartments were much like their on-campus housing, in that they could bring classmates over to study, eat in the dining room, and have sleepovers with friends. 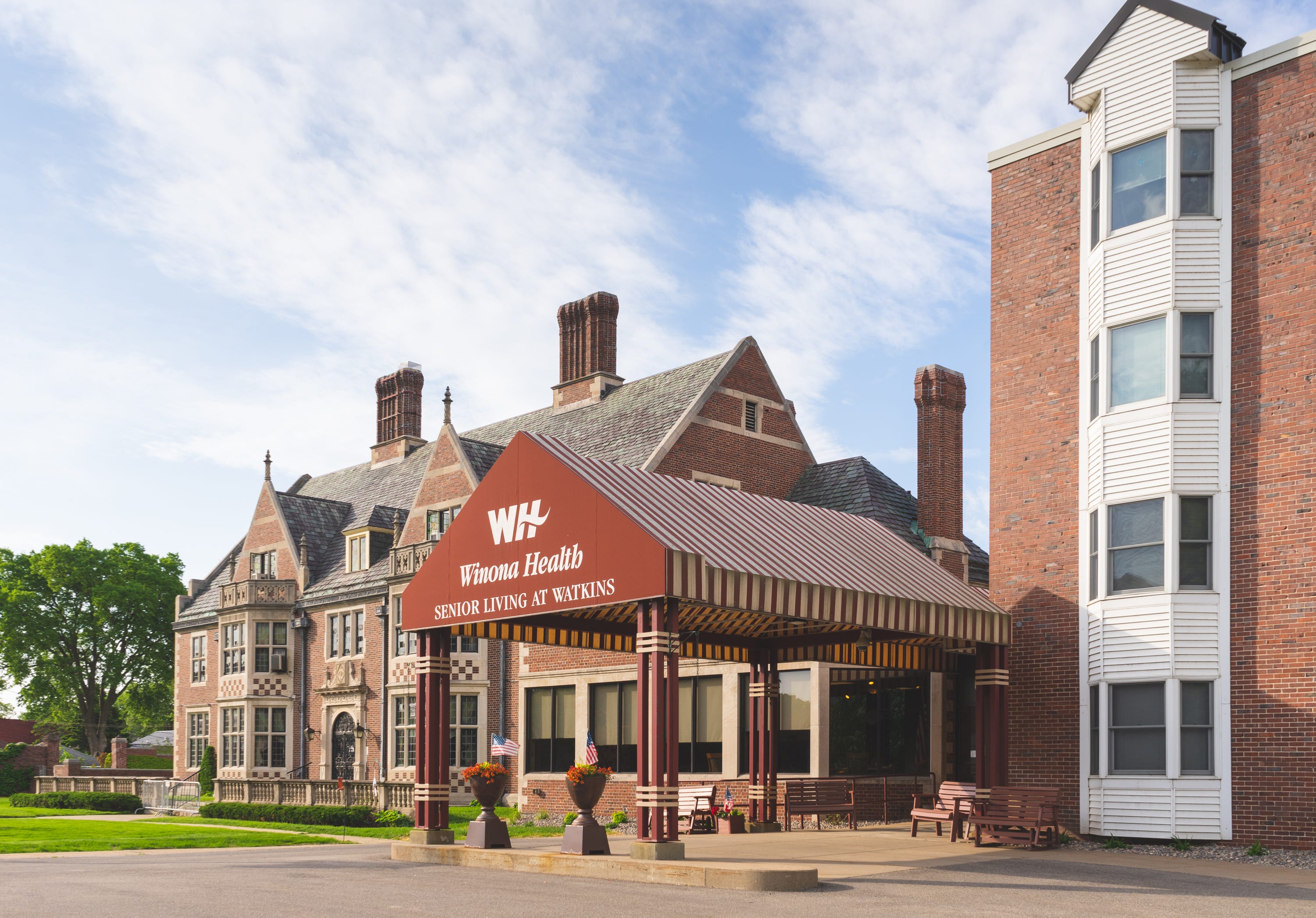 Clutter said it was an adjustment living off campus, about a 15-minute-drive away from most of her friends, but she said it helped her get out of her comfort zone, focus on classes, and make close connections with the seniors she lived with.

“When I go home to Des Moines I’ll have dinner with the residents and I’ll give a concert,” she told Insider. “Age difference is a big thing, but ultimately there’s so many things that connect us.”

Jensen said that while living at Watkins, she has created deep friendships with residents, who look out for her and make sure she’s taking care of herself. 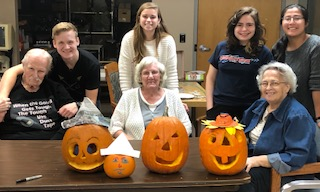 Winona HealthStudents with residents at a pumpkin carving event.

“Though there is an age gap, we’re not that different from one another. We’re all are human, we experience challenges and struggles, and we are all learning and growing together,” she told Insider. “I think that the older generation is usually viewed with this idea that they are so different from us that they won’t understand us or what we are going through.”

Butts told Insider that intergenerational living is “imperative” for a healthy community and a healthy country, especially when people are living longer lives.