Bank of America analysts downgraded Intel shares to “underperform” on Friday after the chipmaker’s third-quarter report revealed new weaknesses in its business.

While Intel beat expectations for quarterly revenue and met profit estimates, shares tumbled as investors balked at a slowdown in its server business. Capacity digestion drove a marked decline in the three-month period, and Intel guided for a continued slump through the current quarter.

Bank of America lowered its price target for Intel shares to $US45 from $US60, implying a 17% drop from Thursday’s closing level over the next 12 months. Shares nearly hit the new target on Friday, reaching an intraday low of $US47.66 as of 12:05 p.m. ET.


Read more:
‘The largest asset bubble and disconnect from the economy ever’: A widely followed market strategist outlines the negative side effects of Fed intervention â€” and shares the 2 signals he’s using to monitor the situation

The forecasted second-half weakness brings a handful of structural issues to light, analysts led by Vivek Arya wrote in a note to clients. The earnings report and subsequent analyst call lacked a plan for fixing manufacturing hurdles for its next-generation, seven-nanometre chips. Competitors have already moved into that market, and some have even begun shipping five-nanometre processors. The production challenges saddle Intel with its 10-nanometre chips and their low yields, the analysts said.

Intel also stands to lose from a demand shift toward cloud and consumer markets, the team added. The company’s profitable PC and server businesses face a continued decline from the trend, and a delay to next-generation processor shipments exacerbates the problem.

The company also faces increased competition from chipmakers taking advantage of the foundry ecosystem. Firms including Nvidia and Advanced Micro Devices design their own chips and hire other companies, often TSMC and Samsung, to manufacture them. Competitors using the process pose an increasingly large threat to Intel’s market share, Bank of America said.


Read more:
A fund manager at a $US468 billion firm pinpoints 7 portfolio moves to make right now in anticipation of a Biden presidency and Democrat-run government

Intel is exploring the manufacturing strategy, but it’s uncertain when, if at all, it will make such a sweeping transition, the analysts added. Until then, investors could face “years of uncertainty” and eventually shift cash to other chipmaker stocks.

The analysts still see a few upside risks to their bearish outlook. Any clarification to the company’s seven-nanometre production efforts or improvement to 10-nanometre chip yields could erase some near-term concern, they said.

“We also can’t discount Intel’s strong incumbency which could be hard to displace,” the team added.


Don’t put too much energy into predicting the result — 5 key tips for clients from strategists at JPMorgan’s $US1.9 trillion asset management arm with less than two weeks to go to the election 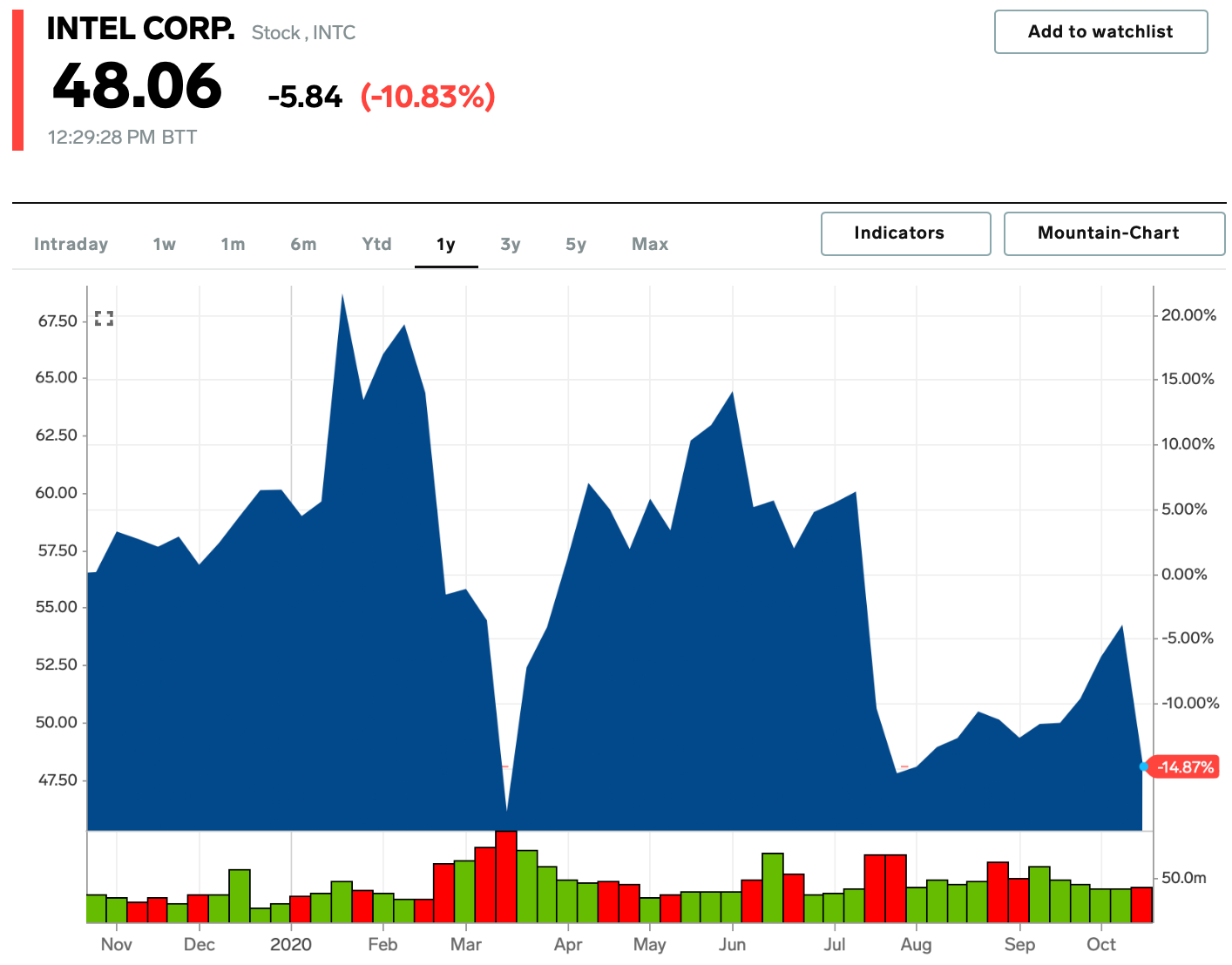