On Tuesday, Intel came out with its state-of-the 17-qubit superconducting test chip, matching the biggest quantum computer chip ever to be produced, by IBM.

Until now, quantum computing has been, in some regards, a two-horse race between IBM and Google. In April, Google showed off its research on a nine qubit computing chip and has advanced other research that could allow it to break some quantum computing records by the end of the year. In May, IBM showed off the first-ever 17 qubit chip.

All the researchers from IBM, Intel, Google and elsewhere, like Microsoft, are all in a race to to build a 50 quibit chip. That’s the size needed to build a supercomputer which would be vastly more powerful than any of today’s supercomputers. No one even knows what kinds of problems a computer that fast and smart could solve.

Quantum computers are different than today’s computers, which are digital. A digital computer thinks in two states: zero and one (or off and on). But a quantum computer uses combinations of zeroes and ones to creates multiple states, which can be a zero, a one, both at the same time or (and this is the weird part) something in between, a mysterious zero/one state that’s hard to describe or determine. These messy states are called “entanglement,” and there are already several well-known mathematical formulas (aka algorithms), that can make use of these states to calculate things that traditional computers aren’t powerful enough yet to do. For instance, quantum computers can work with billions of variables at the same time, like the interaction between molecules in chemistry.

They are also great for machine-learning tasks. These computers are expected to help find new drugs, create new forms of computer security. It is also believed that this type of computing could lead to computers that can think and reason to create humanoid robots, or deliver medicine that is personalised to each human’s own, unique chemistry.

If all this sounds hard to grasp, don’t worry, you aren’t alone. Microsoft is also betting big on quantum computing and yet Bill Gates admits that, despite all the physics and maths he knows, even he doesn’t really understand how quantum works. That’s how complicated it is.

For now, the challenge is simply to build bigger quantum computers. As Intel explains, qubits are tremendously fragile. Any noise or unintended distraction can cause them to lose data. They rely on superconducting metals that must be kept unbelievably cold. They must operate in a temperature known as “20 millikelvin — or 250 times colder than deep space,” Intel says.

That kind of condition is hard to create and maintain.

It’s not just the cold that’s a problem. As a quantum computer grows in size by adding more qubits, it can malfunction in a lot of ways.

But progress is going fast. In May of 2016, IBM launched a five-qubit machine and the world’s first cloud service. Flash forward a year and these chips are already more than triple the size.

Google expects that it will have created a test computer so big and powerful by the end of this year, that it will be able to perform certain calculations that traditional supercomputers cannot do, a concept called “quantum supremacy,” Martinis told Motherboard.

In the meantime, Intel just threw itself headlong into the game. Here’s a closer look at what it’s up to:

Intel's 7-qubit test chip is about the size of a quarter. The gold connectors allow the chip to be connected to the world outside the quantum computer. Here's a look at the other side of the chip, as it was packaged in the box. One of the things that Intel is also working on is how to eventually mass produce these chips. Mass production is a much bigger, harder problem than creating a single experimental chip. There are still lots of variables to be perfected before this technology is ready for the factory floor. These researchers at QuTech's quantum computing lab are focused on just that. Just for comparison: IBM's quantum computer lives in that white thing. It's a special refrigerator that keeps it at almost absolute zero. QuTech scientist Leo DiCarlo and Intel scientist Dave Michalak were so excited about the new chip that they made this unboxing video. In it they explain in more engineering detail how the chip was built. 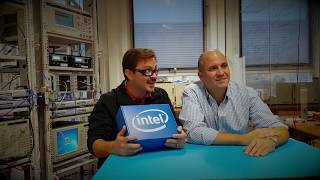