7 mistakes you're making with your Instant Pot, and how to avoid them ShutterstockAn Instant Pot can be a handy kitchen appliance.

It seems like the Instant Pot has taken over kitchen countertops across the globe.

The appliance is a combination electric pressure cooker and slow cooker, making it ideal for whipping up meals in small spaces or helping time-strapped cooks get food on the table quickly. You can also sauté, steam, and even make yogurt in this multitalented gadget.

Though people seem to love the Instant Pot, there are a few common errors that might sour your experience with it.

Here are some common Instant Pot mistakes and how to avoid them.

Adding all of the recipe’s ingredients to the pot at the same time could mess up the cooking time of your dish. Wollertz/ShutterstockDon’t throw everything in at the same time.

Different food items cook at different speeds, which means that some Instant Pot recipes require a little bit of planning.

“Different foods need different cooking times, and you’ll need to take that into account when you use the Instant Pot to prepare meals,” nutritionist Lisa Richards told Insider. “For example, cooking chicken takes around six minutes, whereas rice will take around 20 minutes.”

To prepare the perfect Instant Pot meal, you’ll need to remember to add ingredients based on cooking times. As a general rule, tougher cuts of meat and denser vegetables like potatoes will take longer to cook than items such as leafy greens and soft veggies.

If you’re following a recipe specifically adapted for the Instant Pot, the instructions may even indicate when to add each ingredient. Richards advised that using an accessory like a stainless steel, pot-in-pot steamer set will make adding additional ingredients easier.

If you don’t add enough liquid to your Instant Pot, your food may not cook properly. 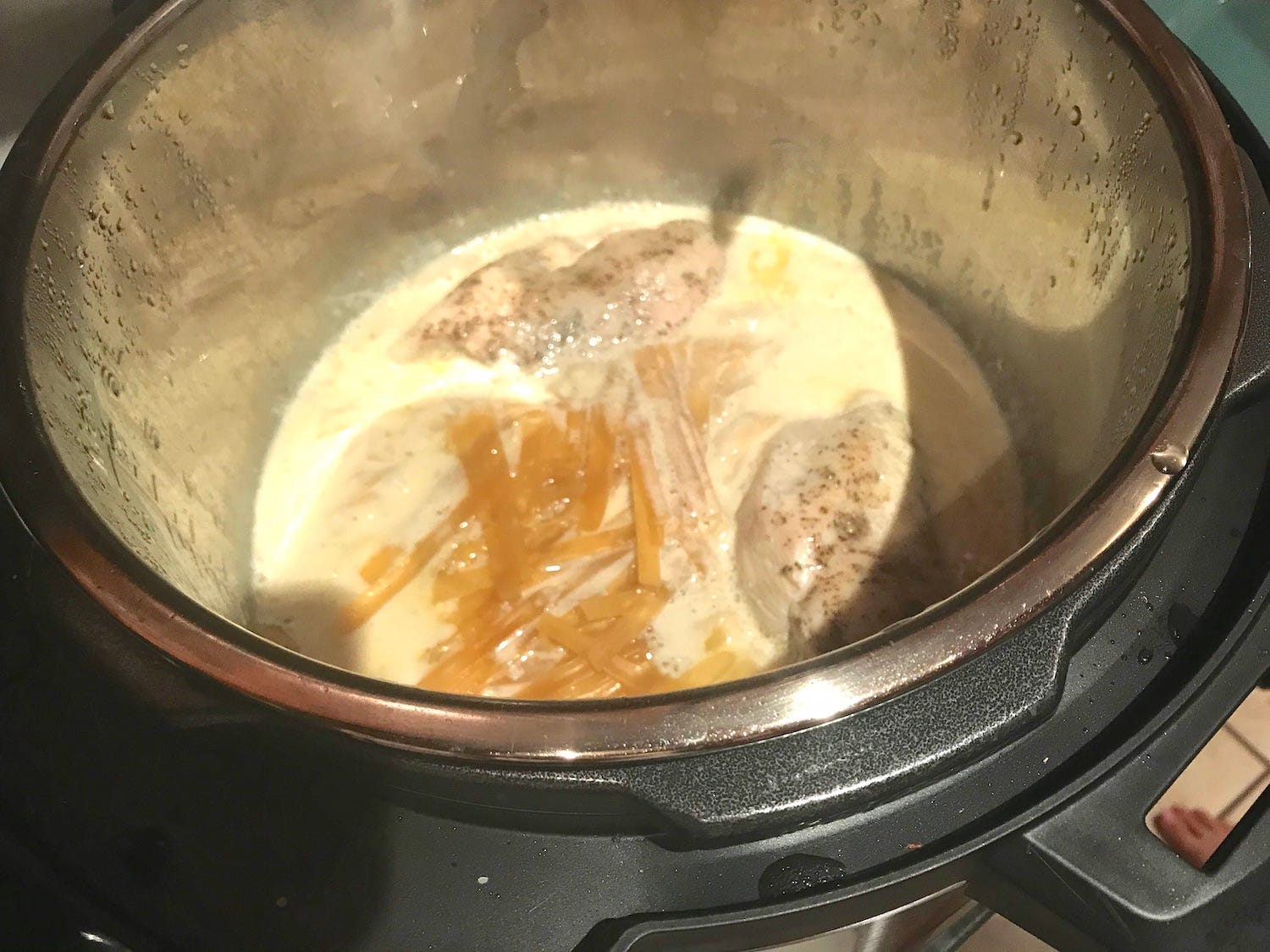 Madeleine_Steinbach/iStockMake sure to use enough liquid.

“The most common mistake is cooking in the Instant Pot without any liquid. Pressure cookers need some type of steam to pressurize the pot. You’ll need a minimum of one cup of liquid while cooking,” food blogger Charisse Yu told Insider.

To make sure your Instant Pot has enough steam to cook your food, always add at least 18 fluid ounces or 500 milliliters of liquid to your pot.

If you forget to seal your Instant Pot’s valve, the appliance may not work properly. 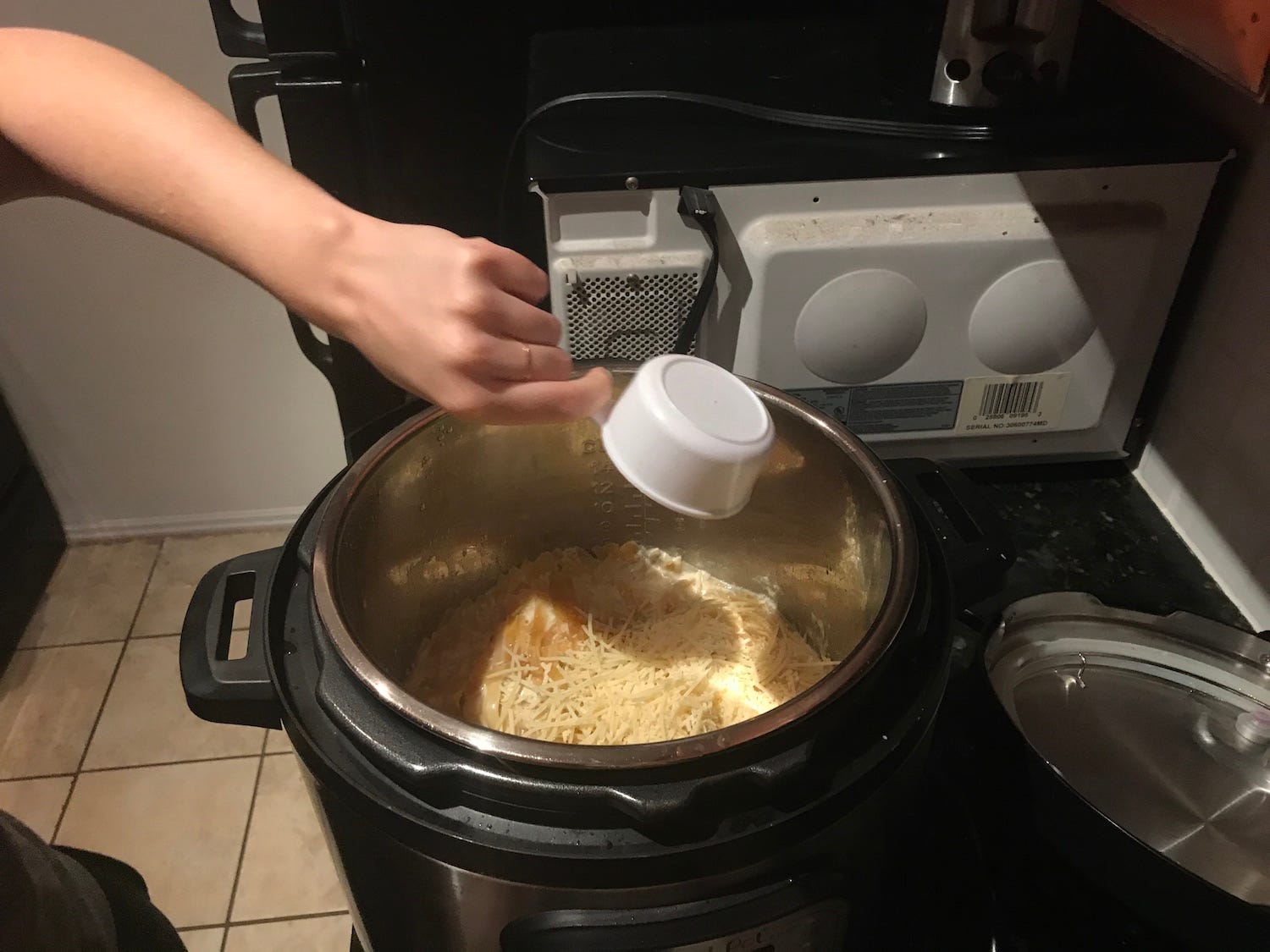 The Instant Pot uses extreme pressure and heat to cook ingredients, which is why it cooks meals so much faster than a stove or slow cooker.

This means that you need to make sure the appliance is properly sealed or your food won’t cook properly.

Overfilling your Instant Pot can lead to a messy kitchen and undercooked food. 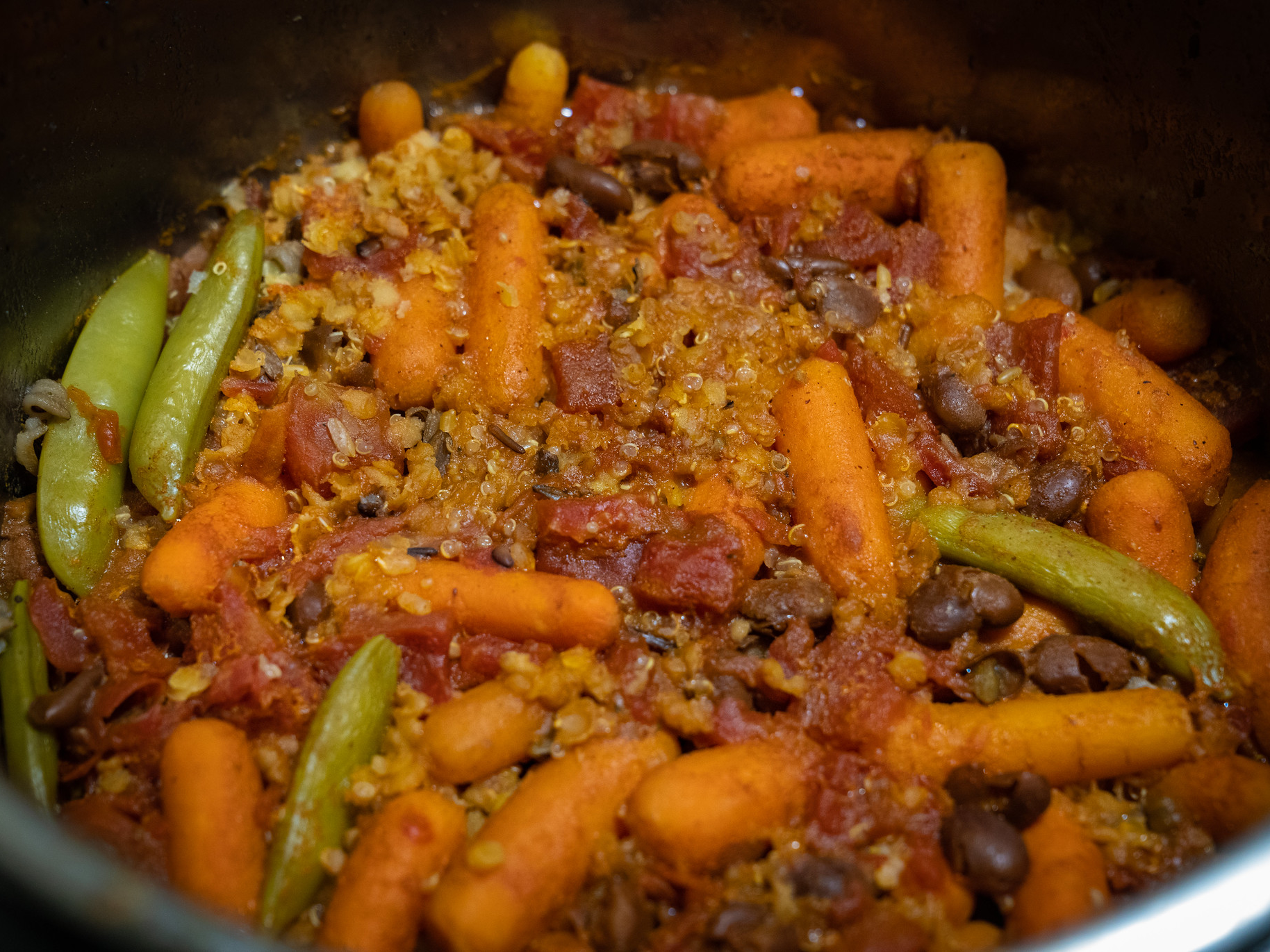 Flickr/Tony WebsterYou should be able to easily shut your Instant Pot’s lid.

No matter how hungry you are, your Instant Pot can only handle so much food. Overfilling the appliance can result in poorly cooked food or even leakage.

“This is a messy mistake because you risk a lot of splatter in the kitchen. Pay attention to the max fill line to avoid this,” registered dietitian Rachel Fine told Insider.

Make sure your Instant Pot is never more than 2/3 full. And if you’re cooking food that expands, such as rice or quinoa, don’t fill the appliance more than halfway.

If your sealing ring is out of place, your appliance won’t work correctly. 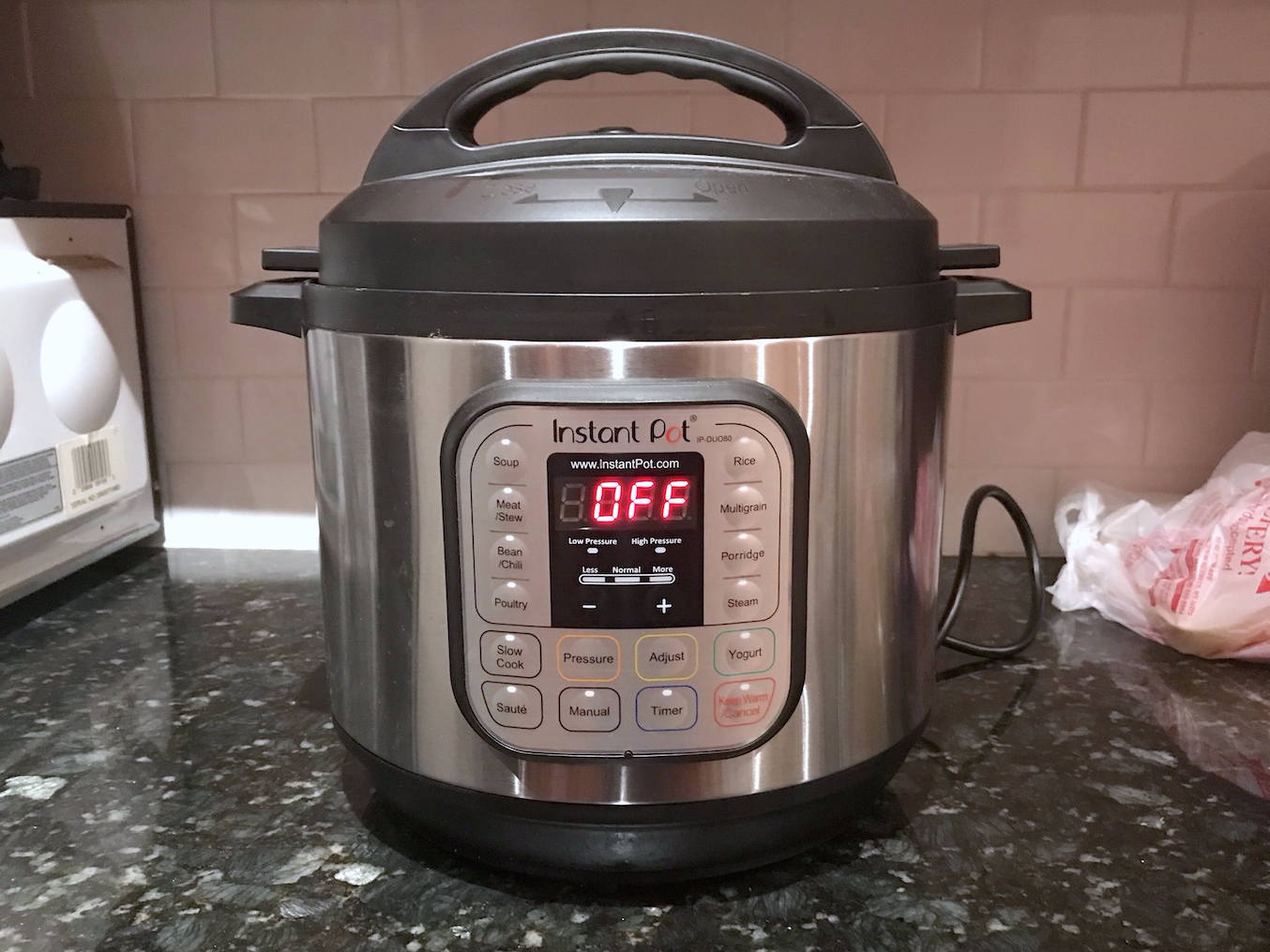 Megan Willett/INSIDERMake sure the sealing ring is in the right place.

An Instant Pot’s silicone sealing ring is part of what allows the appliance to retain the kind of pressure needed to cook food. Not installing it correctly or forgetting to replace it after cleaning will seriously compromise your ability to use the Instant Pot.

“The silicone ring absorbs food odours and should be washed after every use. However, it’s easy to forget to put it back on. If the ring is not properly on the lid, the steam will escape out the edge of the lid and the pressure cooker will not come to pressure,” Sandy Wolner, registered dietitian and food and trend innovator at Pampered Chef, told Insider.

Keep your sealing ring in good shape by removing it from the lid after cooking and washing it with warm, soapy water. Allow it to dry before replacing it on the lid of your Instant Pot.

Using the wrong steam-release setting could ruin your dish. 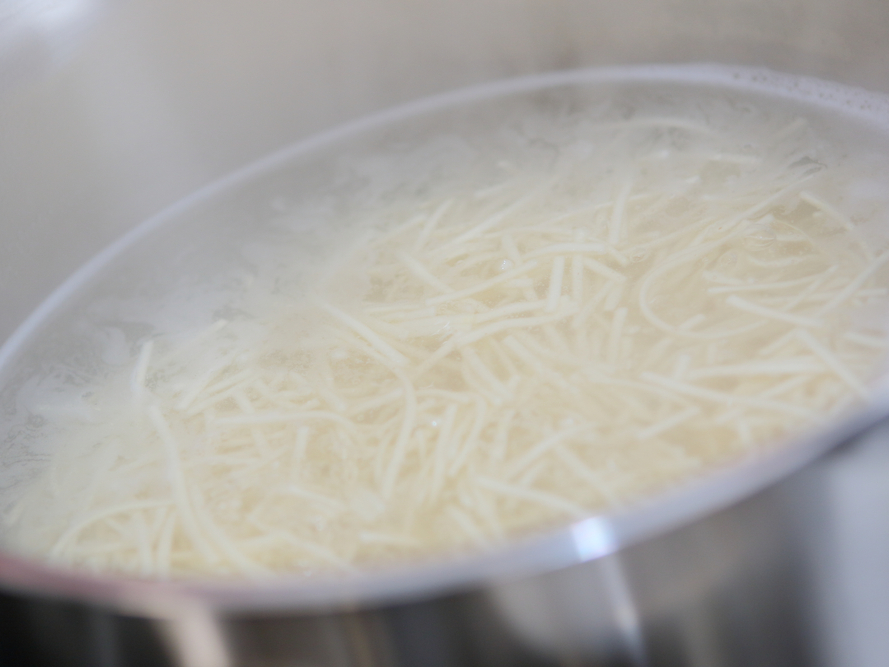 The Instant Pot uses pressurised steam to cook food. That steam has to be safely released before you can open your appliance and remove your finished meal.

“It’s important to follow your recipe to know which way to release the steam. Manual or quick release is not the best option for recipes with a lot of liquid or high starch content, like rice and oatmeal, which may splatter out of the pressure release,” said Wolner.

It’s also important to follow instructions when a recipe notes that you should use the quick-release function rather than allow the Instant Pot to depressurize over time.

Using the quick-release means the food inside the appliance won’t become overcooked. Letting the Instant Pot release steam naturally is a better option for meals that include tougher cuts of meat or legumes you want to soften.

By placing an Instant Pot right underneath your cabinets, you could be damaging your kitchen. 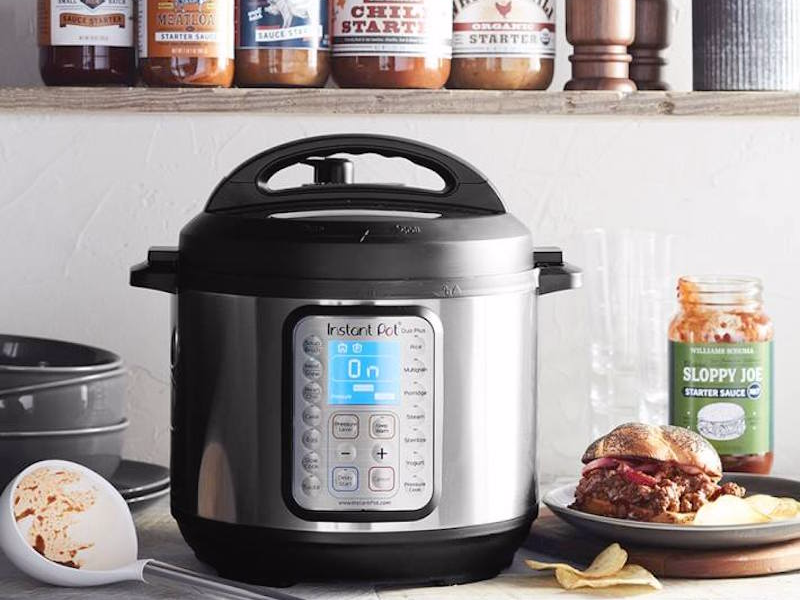 Instant Pot/FacebookTucking this gadget under cabinets may damage them over time.

Using this appliance while it’s tucked under cabinets or cupboards may damage them over time.

“If your recipe calls for a manual release, the steam can take a few minutes to release. In order to protect your cupboards, make sure that the pot is placed away from them. If not, your cupboards or paint can be ruined from the excess moisture,” food blogger Gwen Leron told Insider.

Cooks with limited counter space may want to place the Instant Pot on a table or an area without cabinets in order to avoid damage.