As Facebook brings in new policies to fight the inevitable onslaught of COVID-19 vaccine misinformation, Instagram â€” where anti-vaxx accounts post images and videos to millions of followers â€” could become the place it most struggles to keep it in check.

Facebook said Thursday it would crack down on COVID-19 vaccine misinformation on both Facebook and Instagram, removing posts that make false claims. The new policy comes at a crucial time: On December 2, the UK approved Pfizer’s shot, becoming the first Western nation to authorise a coronavirus vaccine. The US could do the same on December 10.

As we inch closer to vaccines becoming a reality, it’s still not clear how many people will be willing to take one. Experts have voiced their concern that the anti-vaccination â€” sometimes known as anti-vaxx â€” movement could discourage people from taking the vaccine. Even President-elect Joe Biden has warned that Americans have “lost faith” that the shot will work.

But while Facebook has taken a lot of heat over the years for being a hub of anti-vaxx activists and advocates, the real struggle in the coming months may actually end up being on its trendy, younger subsidiary: Instagram.

Anti-vaxx accounts there have millions of followers, the number ever-climbing â€” and prominent anti-vaxx advocates that have booted off of Facebook, such as David Icke, have lingered on the photo-sharing app.

Instagram isn’t the biggest social network for anti-vaxxers, but it’s the fastest-growing

The Centre for Countering Digital Hate (CCDH), a nonprofit that focuses on hate speech and misinformation online, published a series of reports this year on the anti-vaxx movement online.

Imran Ahmed, CEO of the CCDH, told Business Insider that although Facebook still has the largest audience for anti-vaxx content, the movement has been picking up steam on Instagram.

“Every platform is at fault here, but anti-vaxx accounts on Instagram are growing their following, bringing more and more people under their influence, faster than anywhere else,” he said.

The CCDH published a report in July on the audience growth of 409 prominent social media anti-vaxx accounts. It identified Instagram as the “biggest growth area” for these highly-motivated, influential accounts.

“Instagram accounts for more than half of anti-vaxx campaigners’ follower growth during the COVID pandemic, attracting an extra 571,000 people,” the report said.

In a September follow-up report charting follower growth from July to August, Instagram was still the fastest growing platform. “Anti-vaxx accounts on Instagram grew fastest in this period, adding 620,000 followers or 9% of its previous total,” the CCDH said. This brings Instagram’s total audience for anti-vaxx accounts to roughly 7.8 million, per the CCDH.

Facebook still has the largest audience for anti-vaxx accounts, with 31.9 million followers, but that audience only grew 1% over the same period.

As part of a broad crackdown on anti-vaxx content in February, Facebook announced that while it wouldn’t outright ban anti-vaxx posts, it would restrict their visibility. Facebook’s search function, for example, is not meant to throw up any posts containing anti-vaxx misinformation.

If you type “vaccine” into Facebook’s search bar, it returns the pages for the Centres for Disease Control (CDC), the World Health Organisation (WHO), and a few pro-vaccination pages.

When Business Insider plugged the same word into Instagram’s search on November 24, three out of the top five results â€” including the number one result â€” were anti-vaccination accounts. 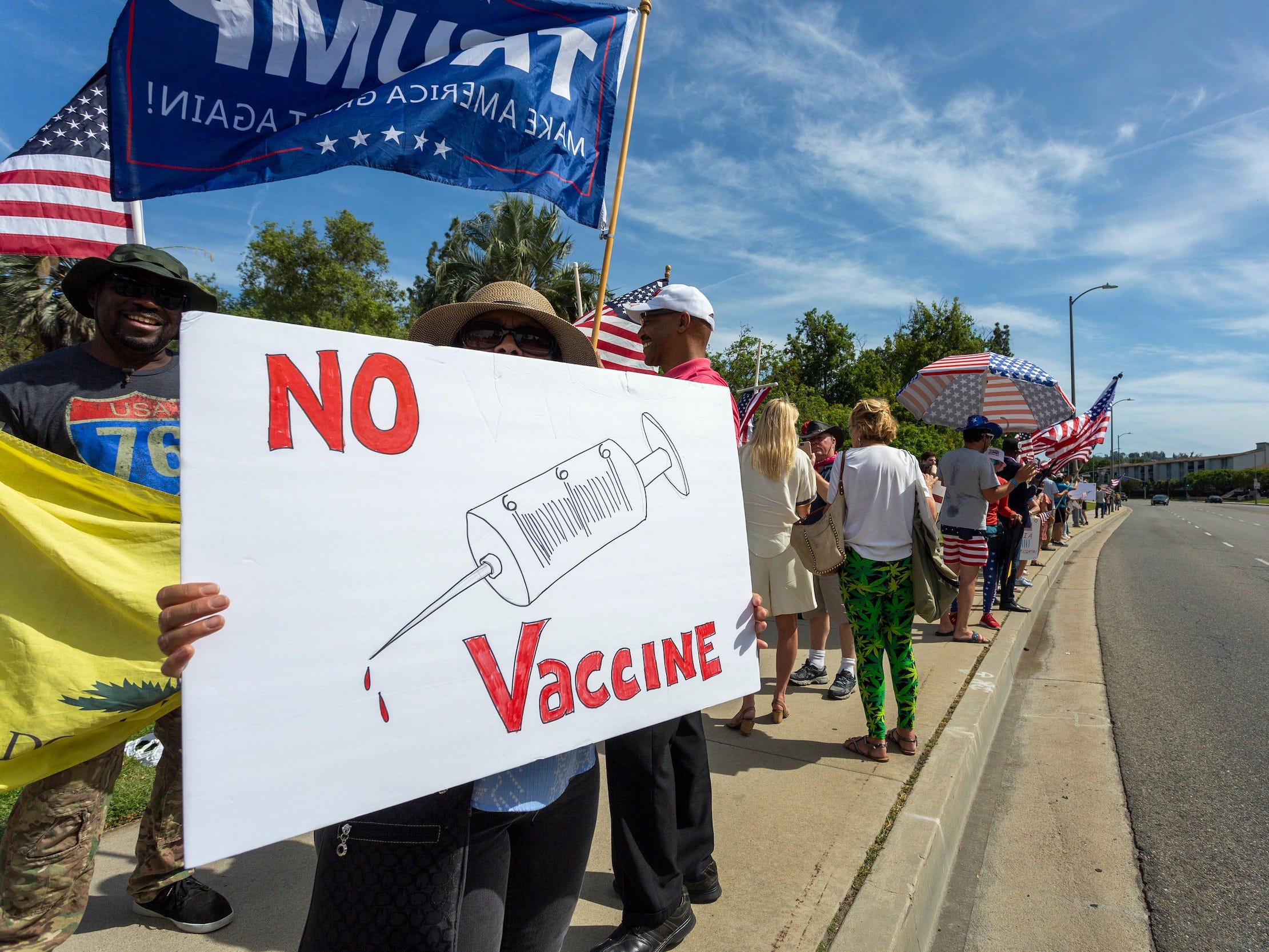 David McNew/Getty ImagesMay 16, 2020: A protester holds an anti-vaccination sign as supporters of President Donald Trump rally to reopen California as the coronavirus pandemic continues to worsen in Woodland Hills, California.

Instagram does seem to have enacted some policy changes since. The same search Friday surfaced accounts for the Vaccine Alliance, UNICEF, and the World Health Organisation in top three spots. But these were followed by two of the same anti-vaccine accounts that cropped up the week before.

“It’s disgraceful that, at a time when vaccines are in the news and people want to know the latest developments, users who search for terms like ‘vaccine’ on Instagram are being recommended anti-vaxx content by the platform,” Ahmed said.

Ahmed is also sceptical of Facebook’s policy to take down COVID-19 vaccine misinformation. “[The] policy change is long overdue, but there is no guarantee that it will be properly enforced,” he said.

“As we saw in the months following Facebook’s promise to remove misinformation about coronavirus earlier this year, they rarely enforce their own policies.”

“We take aggressive steps to limit the spread of misinformation about COVID-19 and connect people with reliable information. This includes removing COVID-19 misinformation that could lead to imminent physical harm, such as false claims about cures, ways to prevent COVID-19 or the vaccines now rolling out around the world,” it said in a statement.

“Between March and October we removed more than 12 million pieces of this type of content on Facebook and Instagram. We also ban adverts that include vaccine hoaxes or discourage people from getting a vaccine and put warning labels over posts marked as false by third party fact checkers,” a spokesperson said.

Ahmed believes the best way to tackle vaccine misinformation on Facebook and Instagram is to deplatform prominent anti-vaxx figures, as the CCDH believes them to be the main drivers of anti-vaxx audience growth. “The majority of the problem lies with a small number of superspreaders â€” pages and groups with large audiences â€” who help anti-vaxx misinformation go viral,” he said.

Ahmed added that Instagram appears to be more reticent to remove anti-vaxx personalities than its parent Facebook.

“Even when Facebook is pressured into removing an anti-vaxxer from its platform, as it did in May with David Icke and more recently Del Bigtree, those same actors are allowed to continue promoting themselves and their dangerous conspiracy theories on Instagram,” he said. 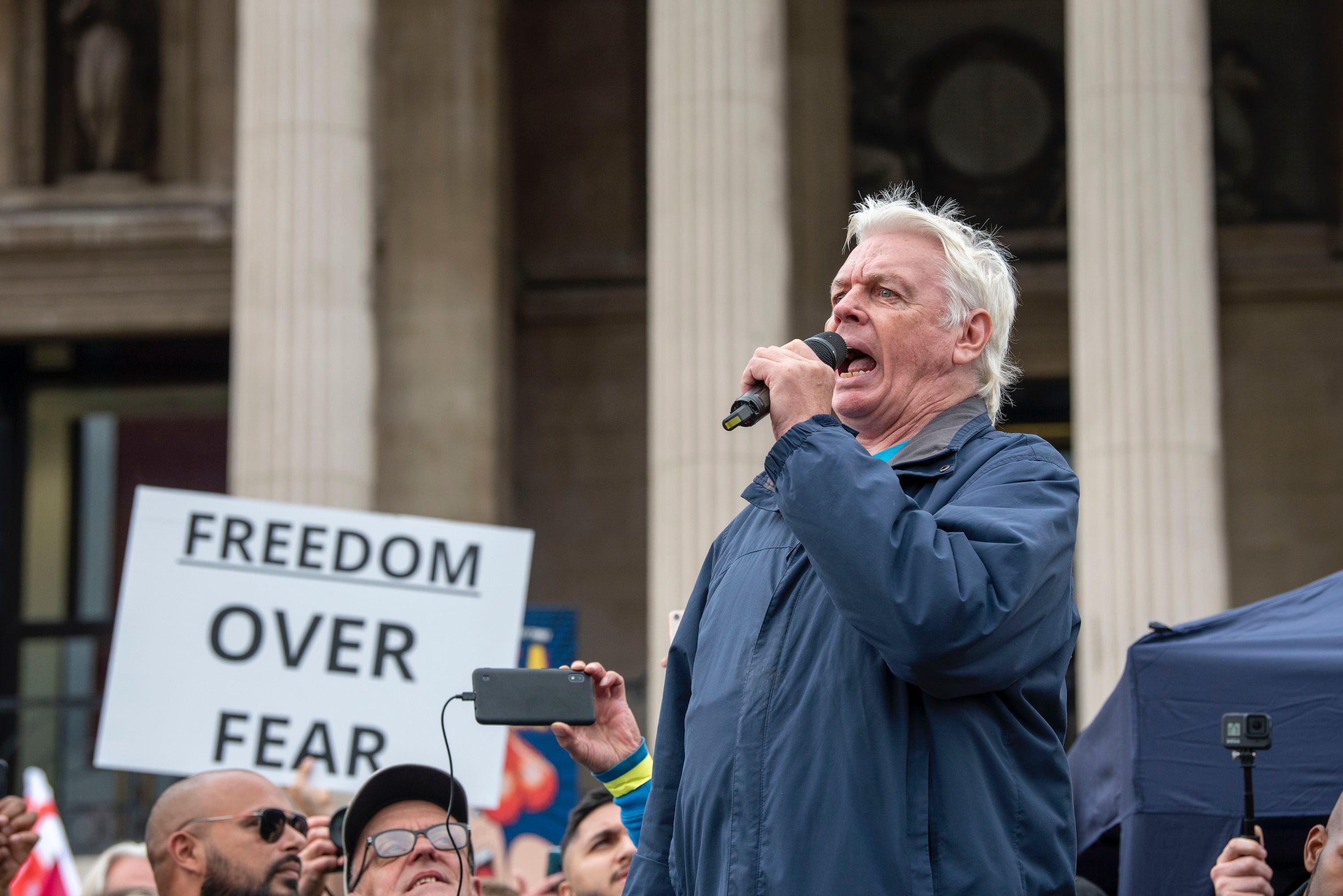 David Icke’s Facebook account was removed after he made various false claims about the coronavirus, including that it was linked to 5G networks. Bigtree’s anti-vaccination show The HighWire was removed by Facebook after he suggested viewers deliberately expose themselves to the virus.

Icke and Bigtree’s Instagram accounts are both still active and have a combined following of 422,000 followers at time of writing.

Facebook’s new policy on COVID-19 vaccine misinformation will apply to both Facebook and Instagram, but it remains to be seen how evenly it will actually play out on the platforms.

The company will have to tread carefully. President-elect Joe Biden expressed support early this year for regulating Facebook over misinformation.

The Financial Times reported in November that the tech giant had started exploring features for encouraging vaccination as a way of getting in Biden’s good books, and CEO Mark Zuckerberg announced on Tuesday it’s planning a “push around authoritative information on vaccines.”

But Ahmed said that governments are “increasingly wise to Facebook’s dishonesty and failure to follow through on spin.”

“They must introduce tough regulations as soon as possible to ensure these policies are enforced, including criminal sanctions for breaches of their duty to remove harmful material that puts lives at risk,” he said.