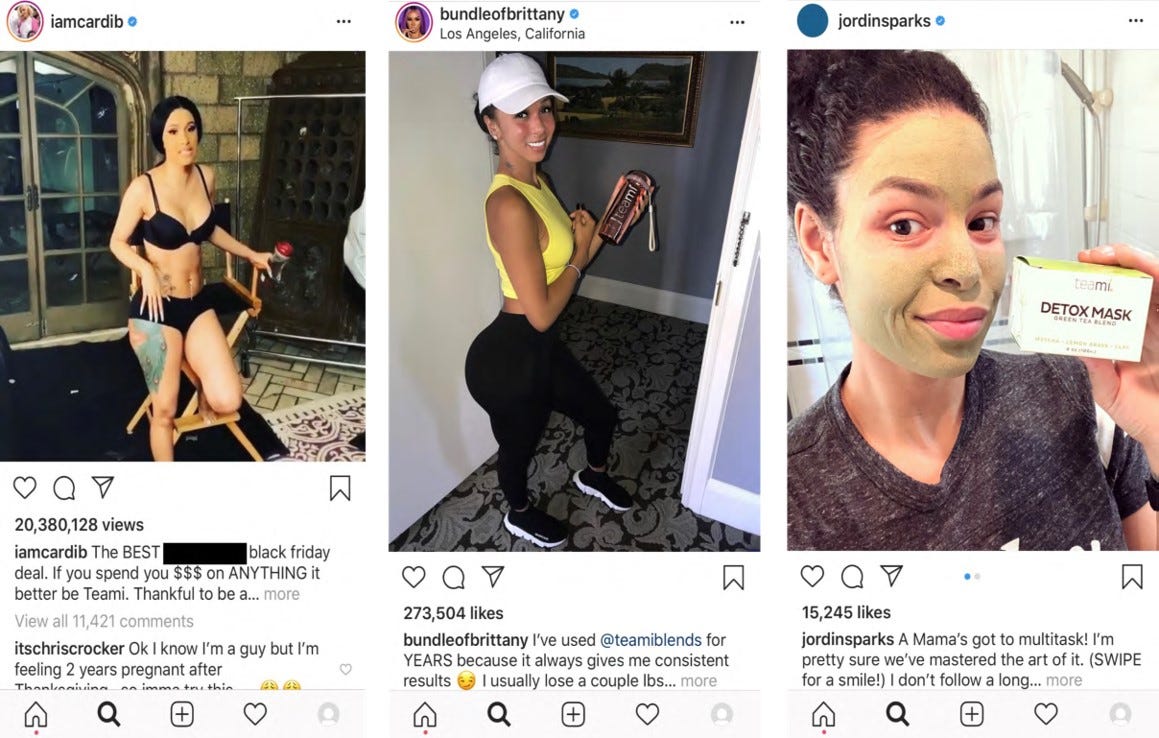 FTCSome of the Instagram posts where influencers failed to ‘adequately’ disclose endorsement deals, according to the FTC.

A detox tea brand heavily promoted on Instagram has agreed to pay $US1 million over allegations that influencers posting about their products made misleading health claims and failed to disclose they were paid.

The Federal Trade Commission alleges that Teami, a maker of detox tea and other wellness products, made “unsubstantiated claims” that its teas could cause weight loss, fight cancer, and prevent the flu. Teami went further to promote their detox tea on social media through a network of popular influencers, who published these misleading health claims alongside their Instagram posts, according to the FTC.

Detox teas and other quick-fix health products have long been popular choices for endorsements among influencers and celebrities. Their effectiveness and dubious claims have long been questioned: A US senator, Richard Blumenthal, called on the FTC to investigate the “misleading, predatory marketing practises” of detox teas back in June 2019.

As the influencer marketing industry has exponentially grown in the last several years – and is expected to reach $US15 billion by 2020 – the FTC has started to crack down on social media stars’ ad campaigns and sponsorships online. The FTC has had a formal set of endorsement guidelines since 2017 that require influencers to disclose when posts are ads and when they’re getting paid for content. More recently, the FTC has been reviewing these guidelines to revamp them and incur harsher penalties for those found in violation.

The particular brand in question in this case, Teami, made more than $US15 million in sales of its teas by using such health claims “without scientific evidence,” the FTC said. It turns out the FTC’s judgement calls for Teami to pay $US15.2 million, but the company is unable to pay that amount so the FTC landed on $US1 million.

“Finally, the order imposes a $US15.2 million judgment-the total sales of the challenged products-which will be suspended upon payment of $US1 million, based on the defendants’ inability to pay the full judgment,” the FTC wrote in the settlement.

This also isn’t the first time that Teami has heard from the FTC about its sponsored posts on Instagram. Back in April 2018, the FTC sent Teami a letter directing the company to ensure its Instagram posts were clearly marked as ads.

As part of the complaint against Teami, the FTC sent out warning letters to ten influencers who made “inadequate disclosures” in their Instagram ads featuring Teami’s detox teas. According to FTC’s endorsement guidelines,ad disclosures have have to be “clear and conspicuous” in social media posts.

In particular, the disclosures in these Instagram posts featured “unambiguous” language, and were often hidden under the “more” tab that cuts off long captions on Instagram’s mobile app. The influencers mentioned by the FTC included a mix of celebrities, TV personalities, and social media influencers: rap star Cardi B,Adrienne Houghton of the “Cheetah Girls,” Instagram model Brittany Renner, and more.

The FTC’s recent letters include a directive to these influencers to draft a written response to the FTC by March 30 that says how they will ensure their sponsored posts will “clearly and conspicuously” disclose relationships with brands.

The FTC’s complaint against Teami features 19 examples of Instagram posts in which paid influencers didn’t adequately disclose their relationships with the detox tea brand. Some of these social media posts in question have already been taken down, while some remain up on Instagram.

Here are some examples of the Teami-sponsored posts that the FTC cited in violation of endorsement guidelines: 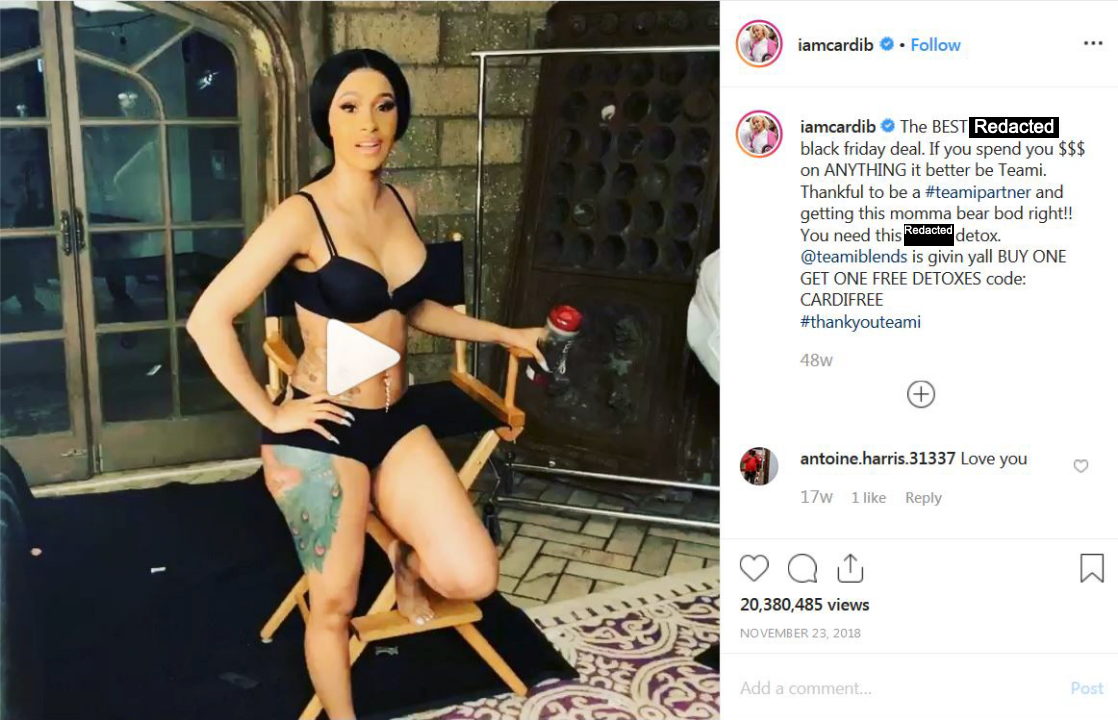 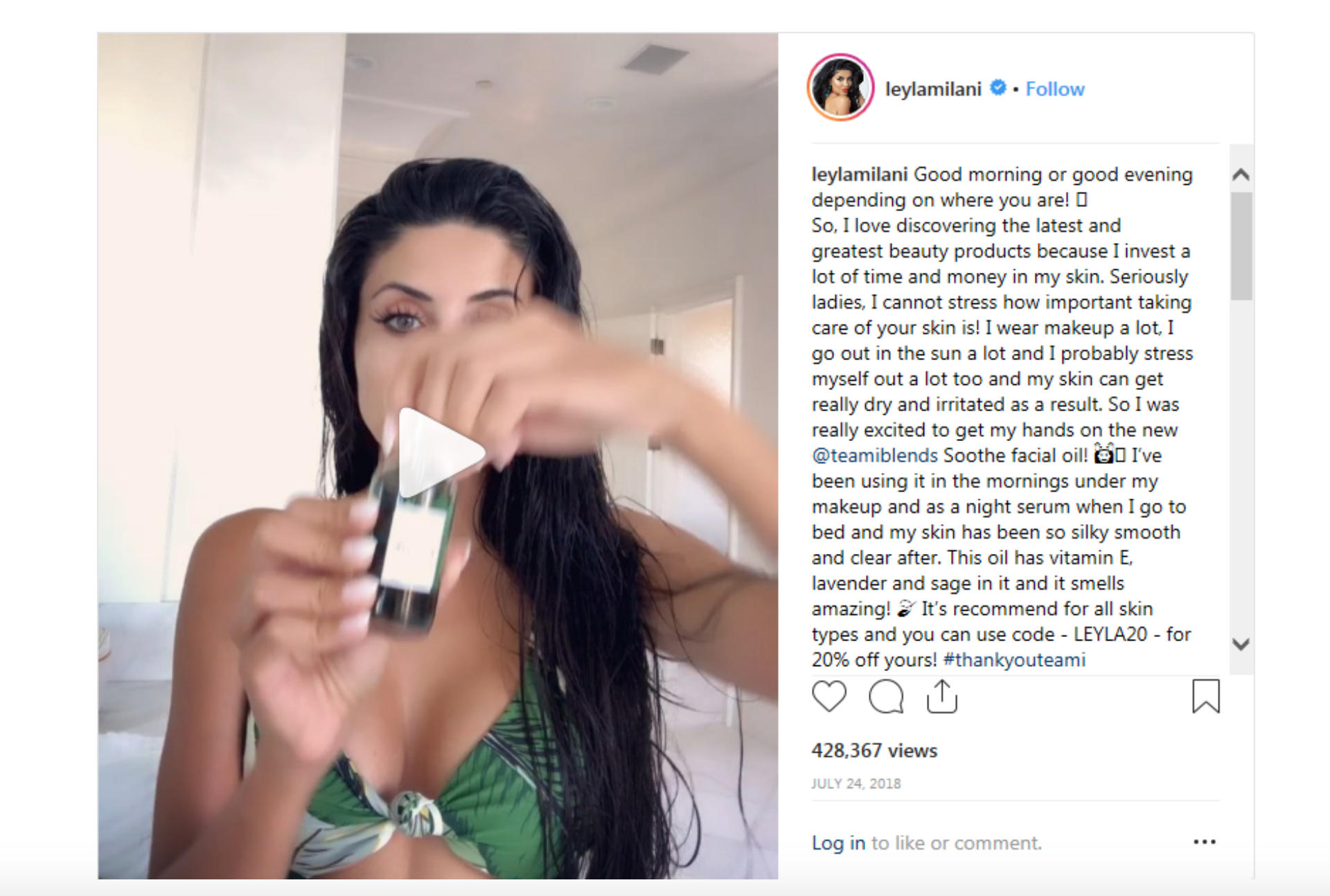 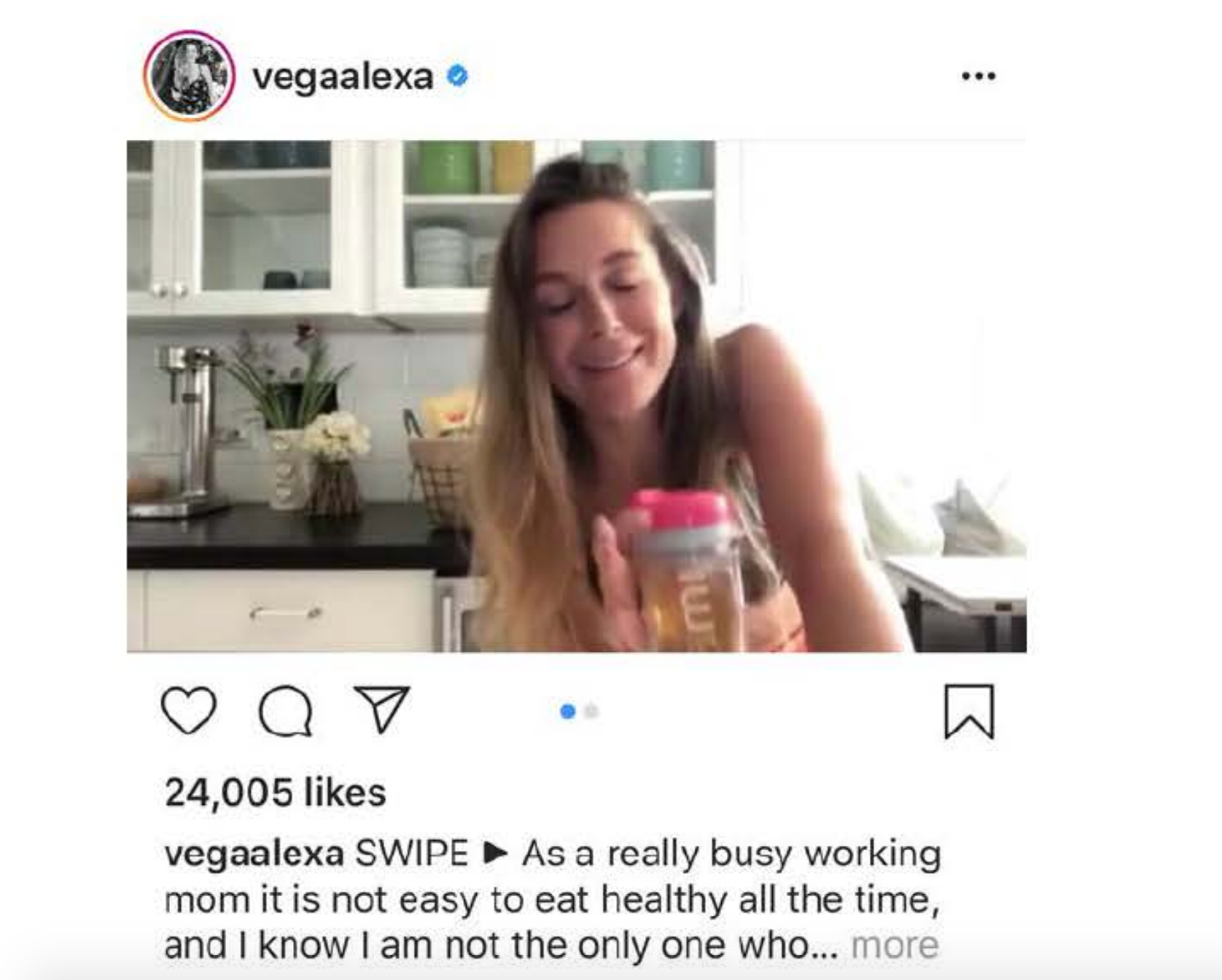 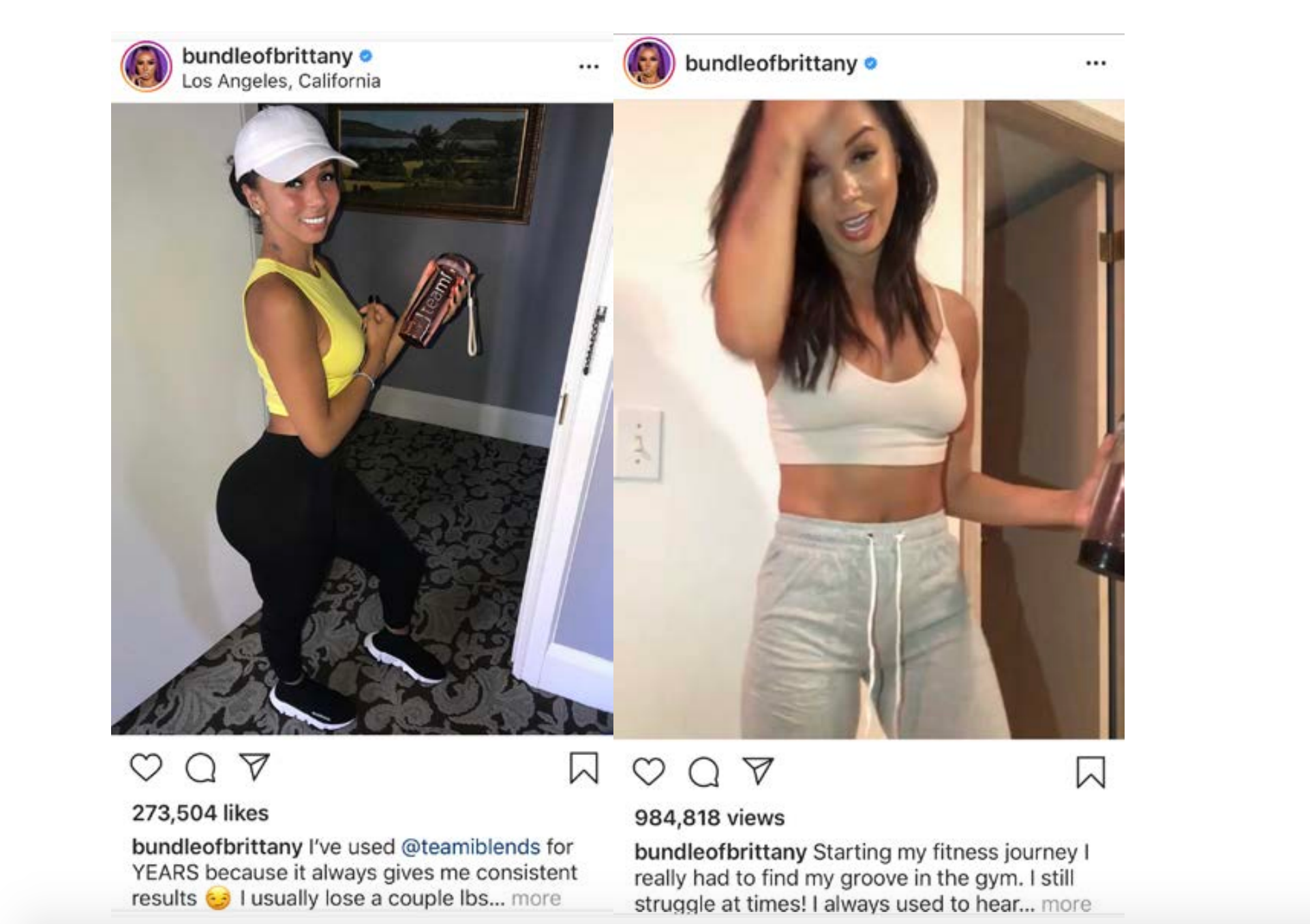 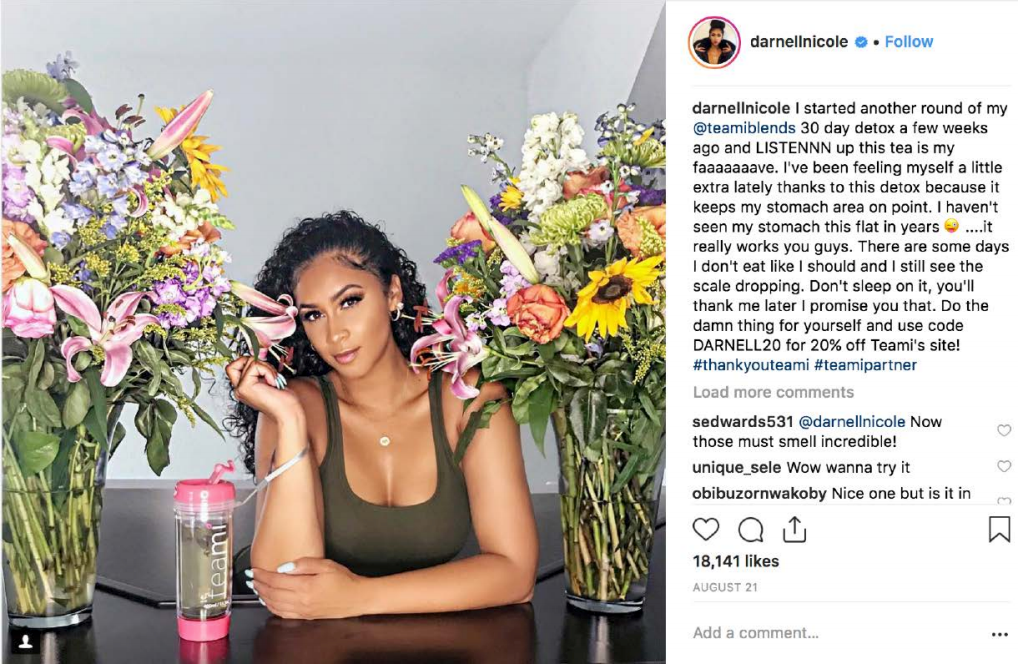 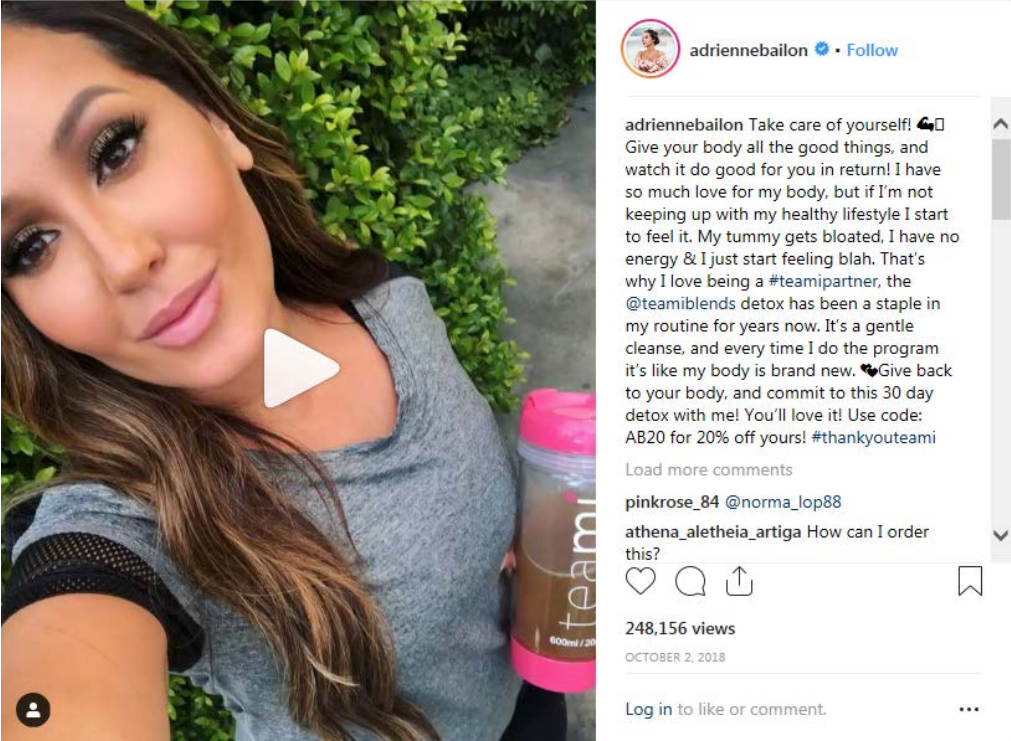 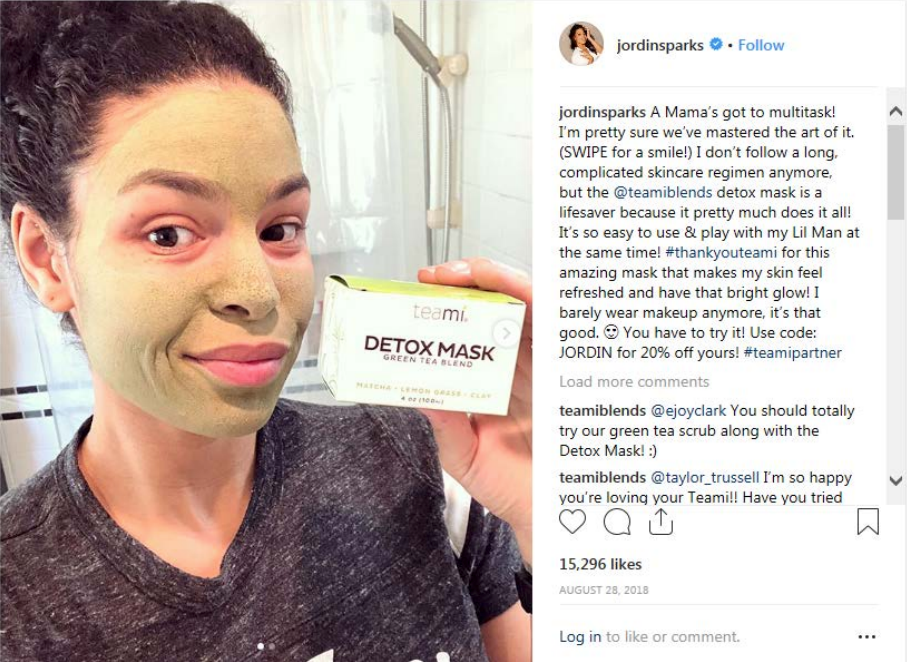 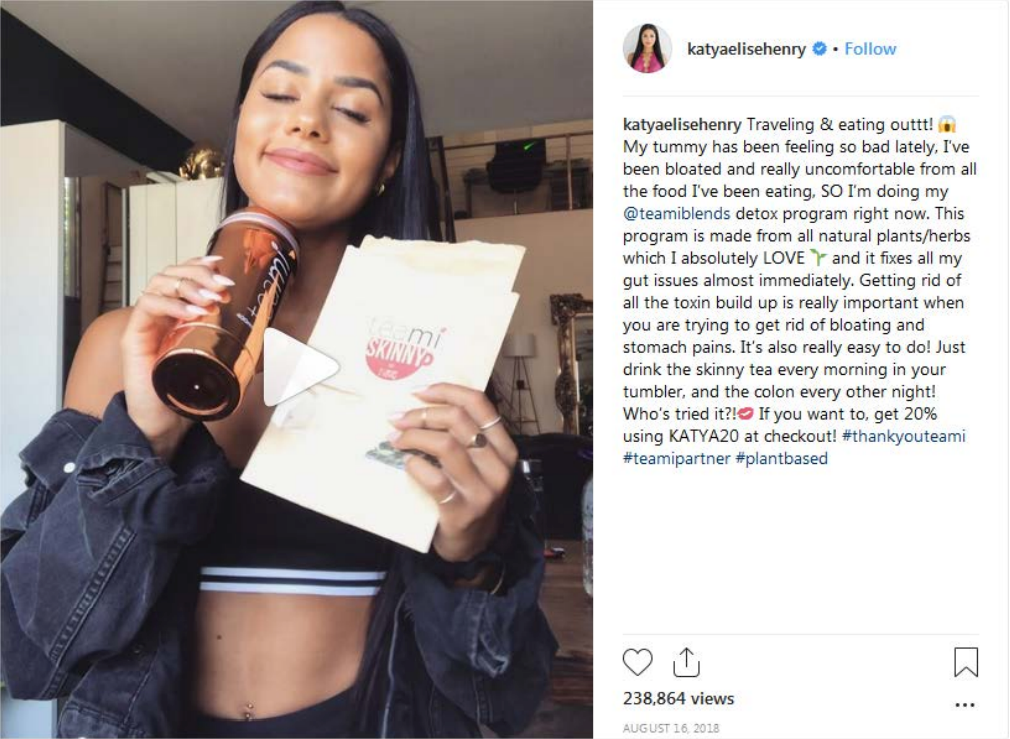 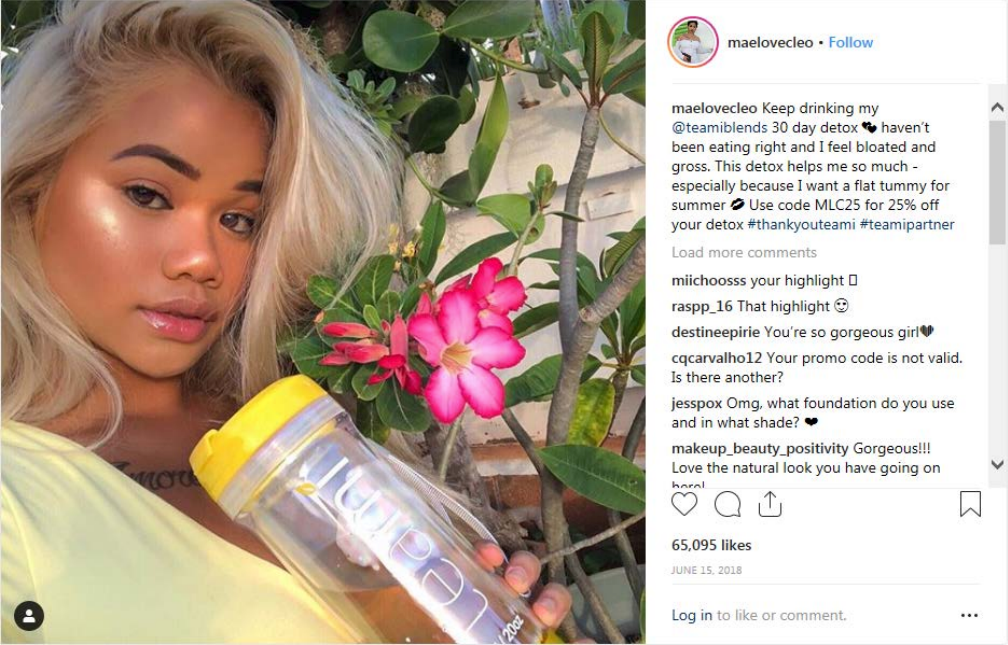 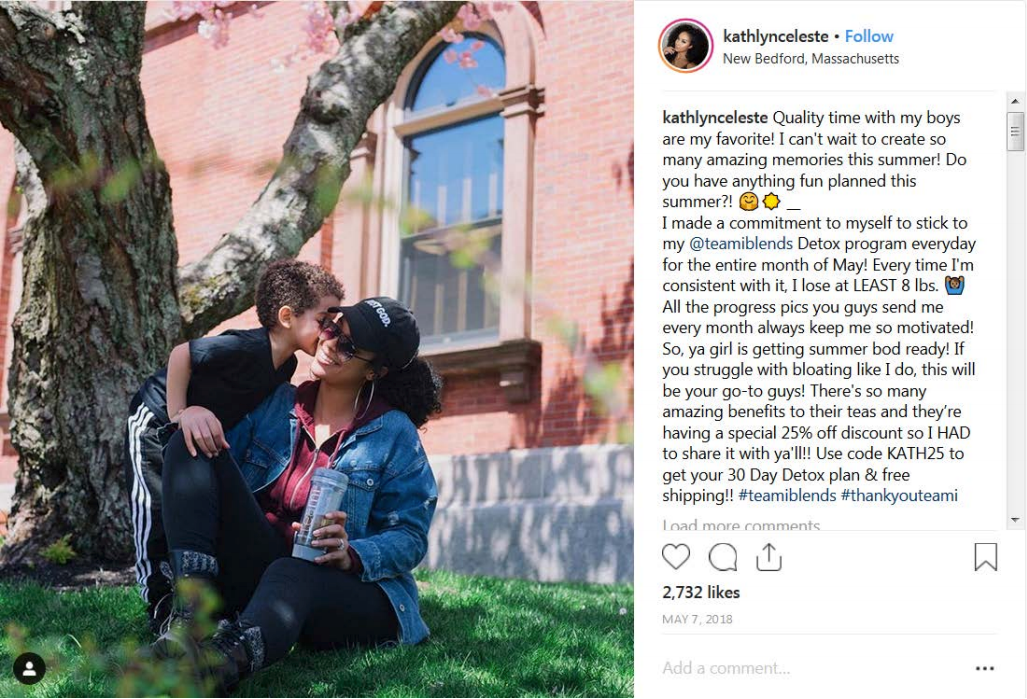 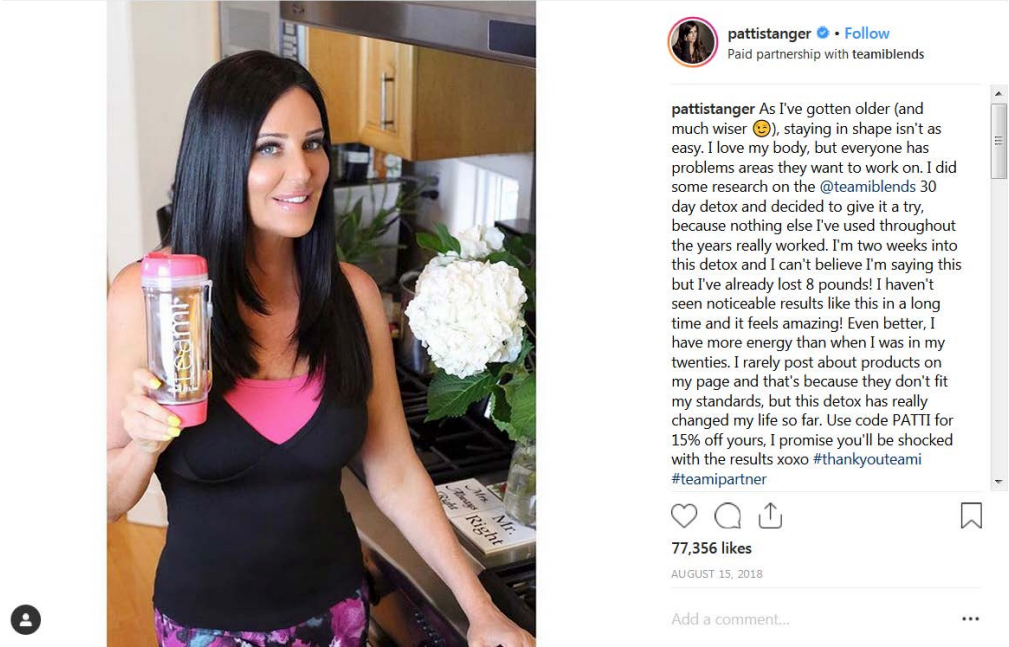 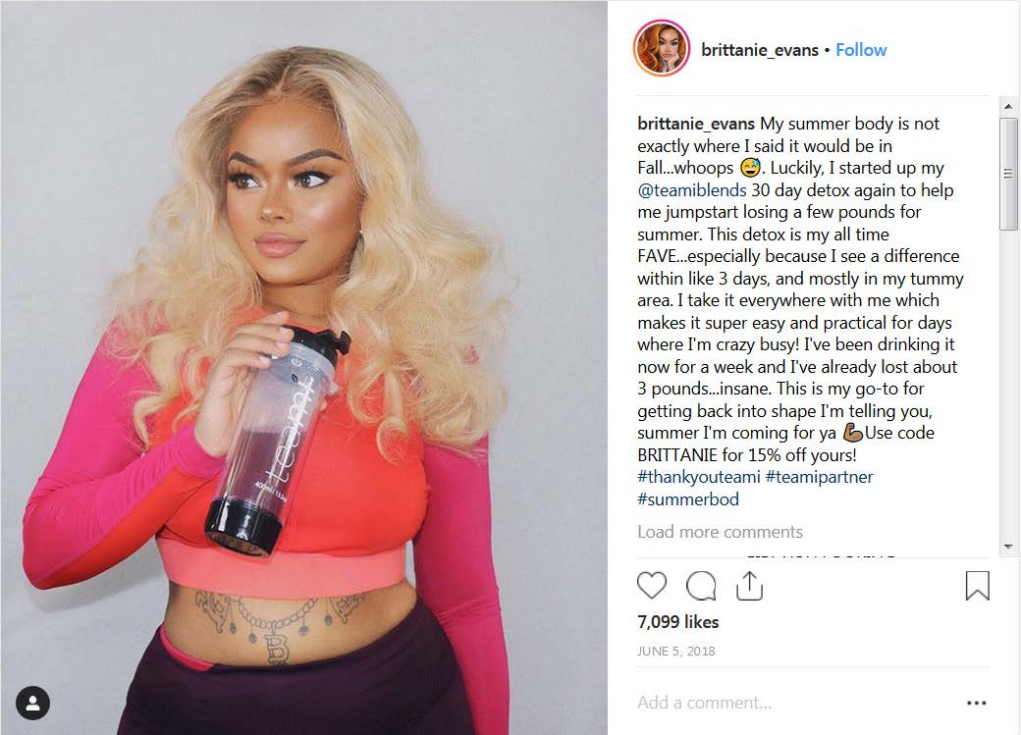 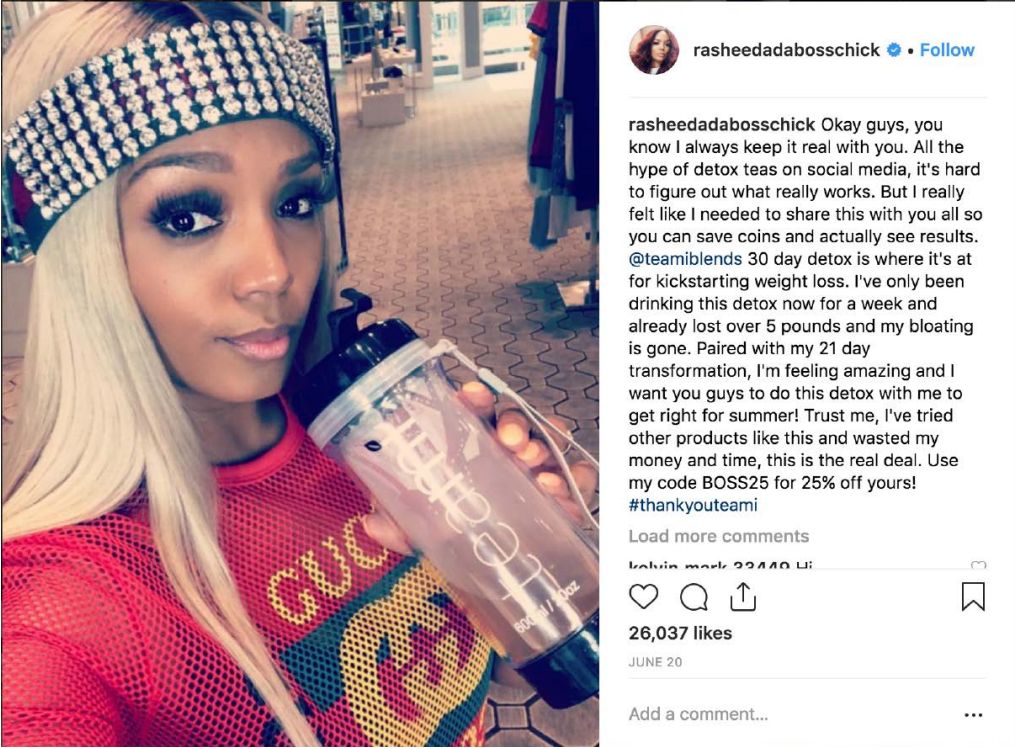 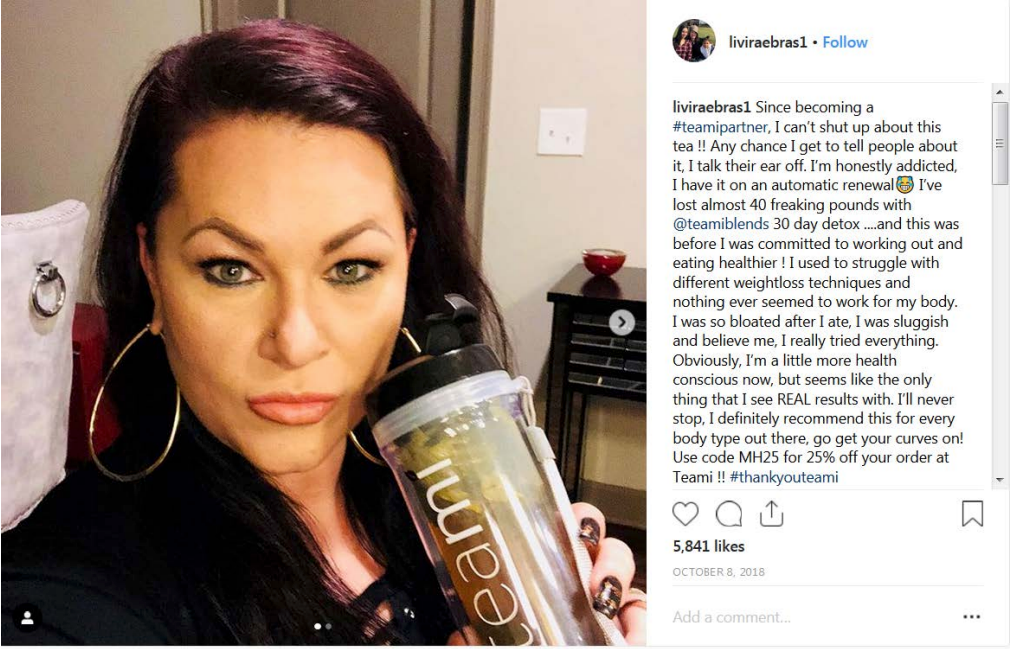 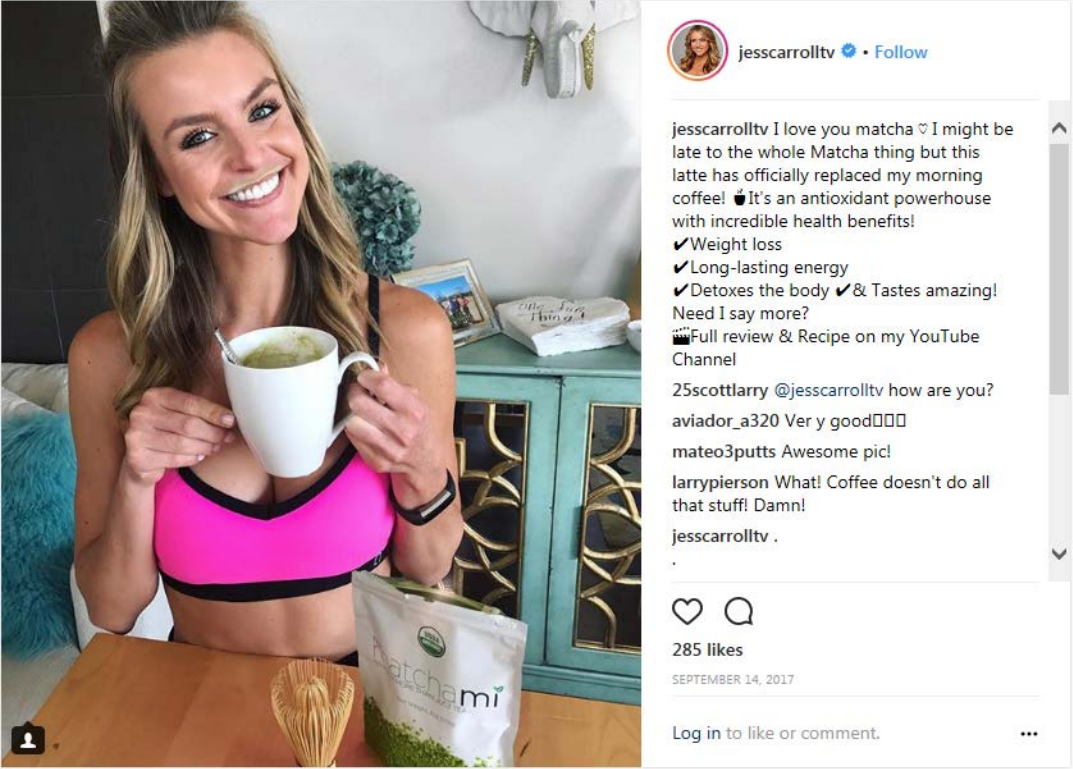 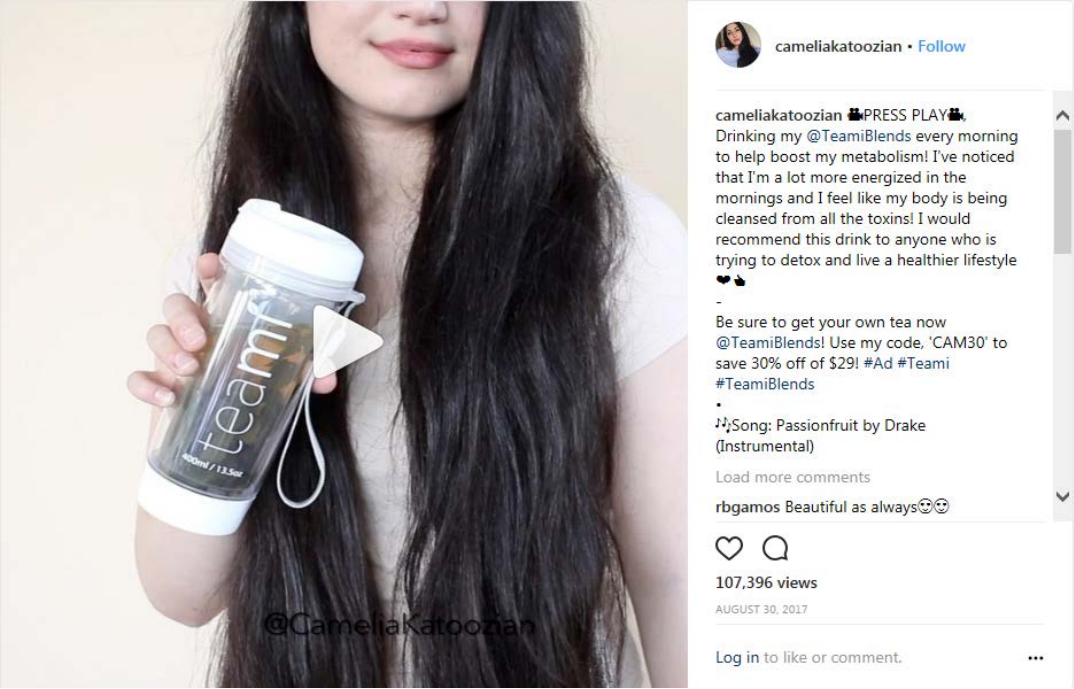 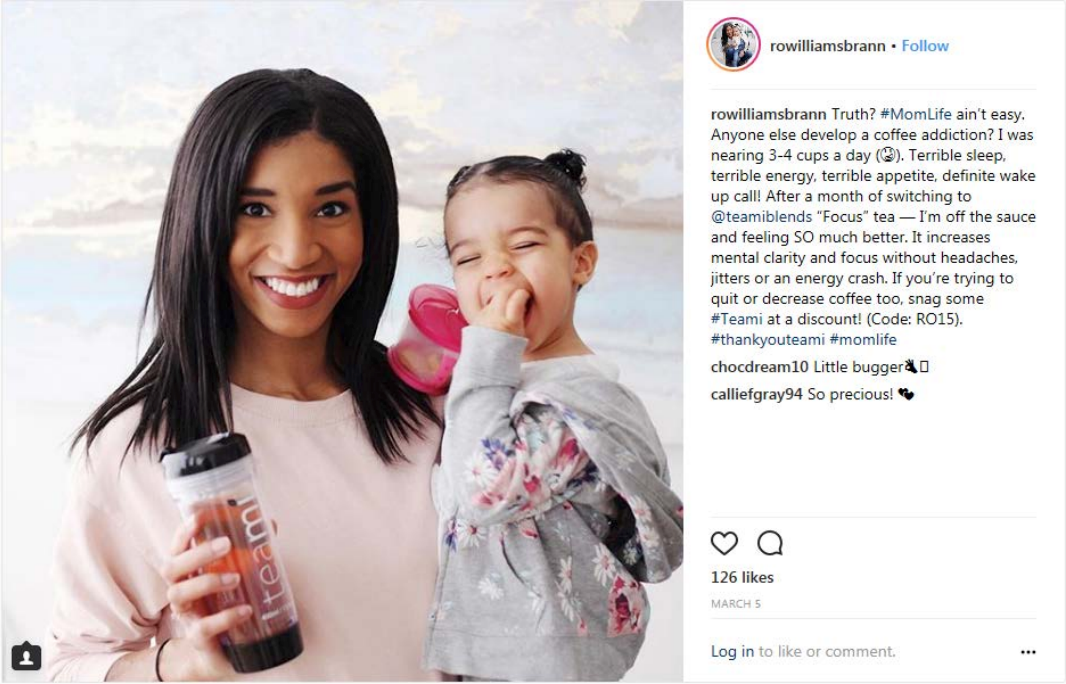 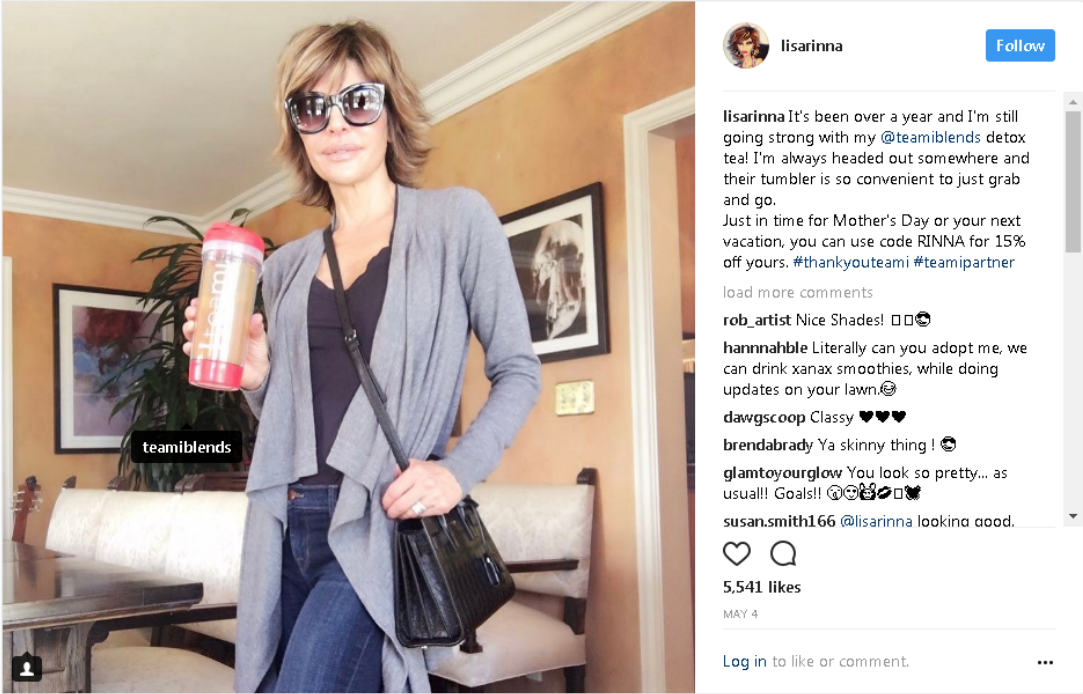