France’s Ligue 1 is the only one of Europe’s top five leagues to have been ended prematurely amid the coronavirus pandemic.

After being halted in mid-March, it was announced on April 28 that the season would not resume. Paris Saint Germain was crowned champion for the seventh time in eight years, while Amiens and Toulouse were relegated.

Both of the latter have filed appeals against the decision,according to the BBC, whilst the president of Olympique Lyonnais, which finished seventh, Jean-Michel Aulas, said the verdict “devalued” French football.

Despite protests however, Maxime Dupuis of Eurosport France says there is unlikely to be a reversal.

“You can’t say to PSG ‘Oh, you’re not champion anymore!”, or to Marseille ‘you’re not in the Champions League anymore,” Dupuis said. “Plus the prime minister said no.”

So, with the season extremely unlikely to resume, Insider has decided it’s time to reflect on which players impressed us most in the 28 (or in some cases, 27) games that have been played.

Below is our Ligue 1 Team of the Season – in a 3-4-1-2 formation to accommodate the plethora of attacking talent the division has to offer.

Stade de Reims unlikely sixth placed finish was built mostly upon an extremely solid defence. It conceded fewer goals than any other team in Ligue 1, and the second least in all of Europe’s top five leagues.

A big part of that has been goalkeeper Predrag Rajkovic, who boasts the highest save percentage in France’s top division this term, as well as the most clean sheets.

Despite his form, the 24-year-old Serbian is still only valued at $US6.2 million, according to The Telegraph, meaning he could prove to be a bargain for a bigger club this summer.

Strong, fast, tall, and tactically astute – 22-year-old Gabriel has all the hallmarks of a world class centre back.

What is most impressive, and most applicable to the modern game, however, is the Brazilian’s comfort with the ball at his feet and ability to play out from the back.

This term, Gabriel has made 111 passes into the final third, which is the ninth highest total in the division and significantly more than any other defender.

The 32-year-old Moroccan played every minute for David Guion’s side this term, leading the defensive line with power and composure, as well as chipping in with three vital goals.

Abdelhamid’s exploits have also seen him nominated for the prestigious Marc-Vivien Foe prize, which is awarded to the best African player in Ligue 1 each year.

Gonzalez, 30, has provided essential experience at the heart of Marseille’s defence this season alongside 20-year-old Boubacar Kamara and 23-year-old Duje Caleta-Car.

The Spaniard joined Marseille on-loan from Villarreal last summer, and has since had several offers to return to Spain thanks to his good form.

However club president Jacques-Henri Eyraud says he will remain in France next year rather than return home.

“Alvaro will be with us next season, I am sure,” he said to AFP, according to L’Equipe.

Many young players take time to adapt to the physical side of men’s football during their early careers. Not 17-year-old Eduardo Camavinga, however, who has been Ligue 1’s top tackler this term.

“I’ve always been like that. I was often moved up a year, so playing with bigger players doesn’t scare me,” Camavinga told Canal+ in September.

Described by the former France international Julian Escude to Planet Football as the new N’Golo Kante, Camavinga is already being linked with Real Madrid and Manchester United.

A star with Benfica as a youngster, the Portuguese prodigy failed to live up to the hype at the Allianz, and he also struggled during a disappointing loan spell with Swansea City in 2017/18.

The 22-year-old has repaid Lille’s faith however this term, showcasing the fine footwork, pinpoint passing, powerful running, and, most importantly, confidence – all attributes he showed during his days as a youngster in Portugal.

Angel Di Maria produced 14 assists in Ligue 1 this season, which is twice as many as any other player in the league.

The Argentine also managed eight goals, the best of which was an absurd lob from an acute angle with the outside of his foot against OGC Nice back in October.

Wissam Ben Yedder is most well known for being brilliant on FIFA (the video game) thanks to his insane stats.

The Frenchman knows it too – after being given a Team of the Season card in the game’s “Ultimate Team” mode, he tweeted: “How many broken controllers with this one?”

As well as causing havoc for gamers across the world, he’s also been doing the same for Ligue 1 defenders this season.

Neymar played only 15 games in Ligue 1 this season, however the Brazilian still managed a whopping 13 goals and six assists.

So good was the 27-year-old in the little time he did spend on the pitch, L’Equipe – a French sports newspaper notorious for its harsh player ratings – scored him as the division’s best player.

Neymar was given a score of 6.4/10 for the campaign, 0.23 marks ahead of second placed Angel Di Maria.

Kylian Mbappe was, once again, stunningly good for Paris Saint Germain this term.

The Frenchman finished joint top of the Ligue 1 scoring charts, having hit 18 goals in 27 games. Combined with his five assists, and no other Ligue 1 player was as effective in the final third as the PSG star.

Lyon has been the home of a number of world class strikers over the years such as Karim Benzema, Lisandro Lopez, and Alexandre Lacazette.

The latest is Moussa Dembele.

The 23-year-old Frenchman, who signed for the club last summer from Celtic, hit 16 goals in his sophomore season in Ligue 1, finishing third in the scoring charts.

Heavily linked with both Manchester United and Chelsea, it remains to be seen whether Dembele will stay for a third season at the Groupama Stadium.

A guide to every team and who to support in the Bundesliga, the German football league that’s the biggest sporting event to return during coronavirus 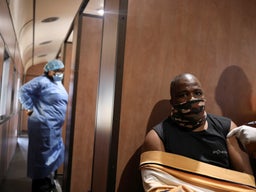