Private aircraft are often tools of the rich and famous to travel the world luxuriously without hindrance, but they also have a major role in the United States Armed Forces

In addition to its warfighting, troop transport, and cargo aircraft, the military operates a fleet of converted civilian aircraft for use by VIP government officials, military leaders, and in combat zones.

The most notable user of the fleet is the President of the United States, who flies primarily in a modified Boeing 747 that bears the name Air Force One when the president is on board, though that represents a fraction of the private jets currently enlisted in military service.

On the home-front, the fleet is accessible by cabinet secretaries, top military officials, and even high-ranking elected officials. Private travel on these aircraft is often the most convenient and secure way to transport government officials as they are often outfitted with communication suites providing a vital link to the outside world should an incident occur.

On the battlefield, the aircraft serve as lifelines to troops fighting on the front line, with some providing vital intelligence and others relaying critical communications.

Take a look at the private jet aircraft converted for military use.

The most notable converted civilian aircraft in the military’s fleet is a VC-25 used by the president of the United States, known to many as Air Force One.

The most iconic aircraft to currently roam the skies, the VC-25 is used exclusively by the president and operated under the famous call sign when the commander-in-chief is onboard. It’s the military variant of the Boeing 747-200, used primarily as a passenger liner in its peak and can now be seen flying cargo around the world.

Though its full amenities and capabilities are classified, the aircraft has a private office for the president, a conference room, passenger seating section, medical suite, and a communications hub upgraded after the September 11, 2001, terrorist attacks, according to the Air Force. The modified 747 can also be refueled while in the air to remain flying for as long as the Air Force can keep it fuelled and until the food runs out.

The aircraft features the blue-and-white livery with a gold cheatline that is the hallmark of the US Air Force’s VIP fleet. The unmistakable livery has even gotten the aircraft in trouble, with a plane spotter photographing the plane while it was flying over the UK and ruining the president’s surprise trip to Afghanistan. With the words “United States of America” emblazoned on both sides in all caps and two American flags on the tail, there’s no question of what the plane represents.

The Air Force has two of the aircraft in its fleet to ensure the president can always access his flagship plane. The two VC-25s are identical on the inside and travel together frequently on presidential missions.

When the VC-25 is too big for the mission, the next largest jet in the military’s stable is the VC-32A, a modified Boeing 757-200 aircraft. 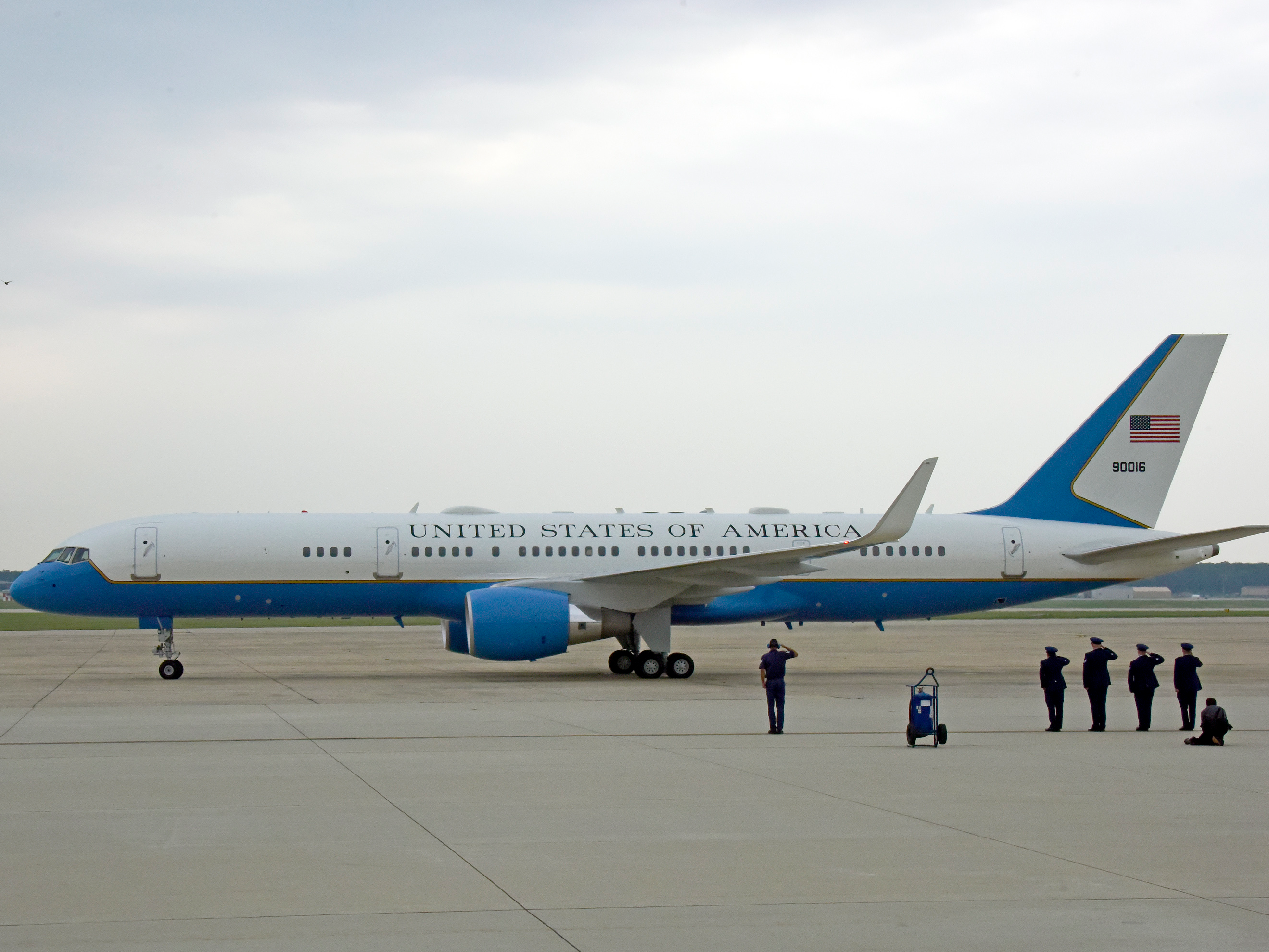 Similarly dressed in blue-and-white, the VC-32 occasionally flies the president but is one of the aircraft of choice for high-ranking government officials. Though not as iconic as the VC-25, the modified Boeing 757 is frequently tasked with high-profile missions as it frequently flies the vice president and secretary of state around the world.

The president will typically use the VC-32 when the modified Boeing 747 is too big for the task. President Obama used the aircraft to visit smaller cities during his re-election campaign and President Trump used the aircraft for a quick hop between the Indian cities Delhi to Agra when touring the Taj Mahal during his visit.

Though the aircraft doesn’t feature all the same amenities as Air Force One, the VC-32 does feature a stateroom for its primary flyer, communications suite, and a range of 5,500 nautical miles, according to the Air Force.

The baby Boeing in the Air Force’s fleet is the C-40 Clipper, a modified version of the popular Boeing 737-700 aircraft. The range of the aircraft is 4,500-5,000 nautical miles, according to the Air Force, which is comparable to the VC-32, and it can over 100 passengers depending on the configuration. The C-40B is known for its extensive communications apparatus and is referred to as an “office in the sky” by the Air Force.

Not all Clippers are painted in the iconic blue-and-white livery as some as painted in less noticeable colours, ideal when travelling to destinations where a low-profile helps mitigate safety concerns. Large congressional delegations frequently use the aircraft because of its capacity.

The United States Navy also operates the C-40A variant, though not in the blue-and-white livery. The aircraft are mixed-use cargo and passenger aircraft with changeable configurations depending on the needs of the mission, according to the Navy. The aircraft seldom carry VIP government officials as they are largely based outside of Washington, though the secretary of the navy may use them. 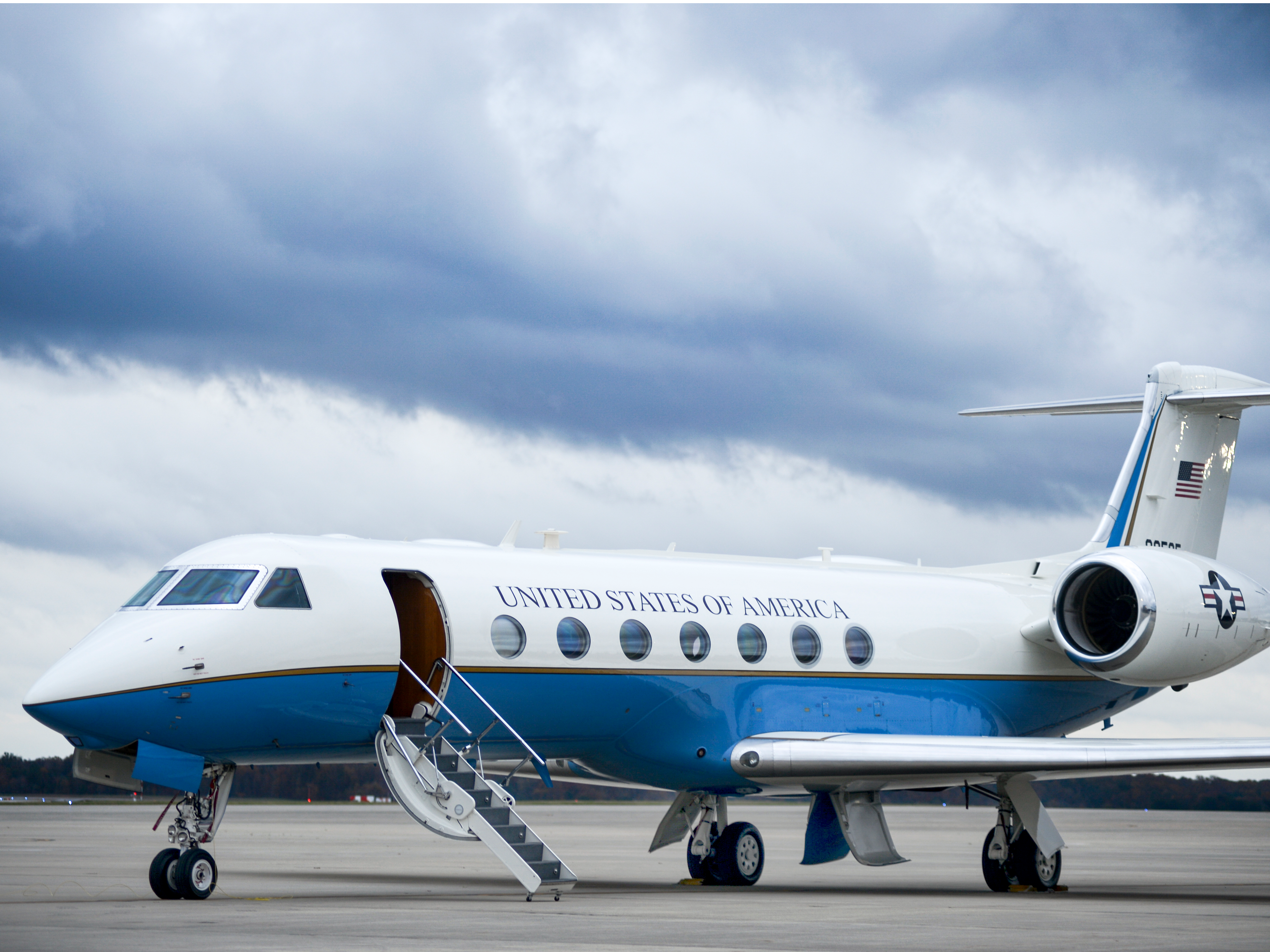 Other branches that operate Gulfstream aircraft include the Coast Guard and Navy. 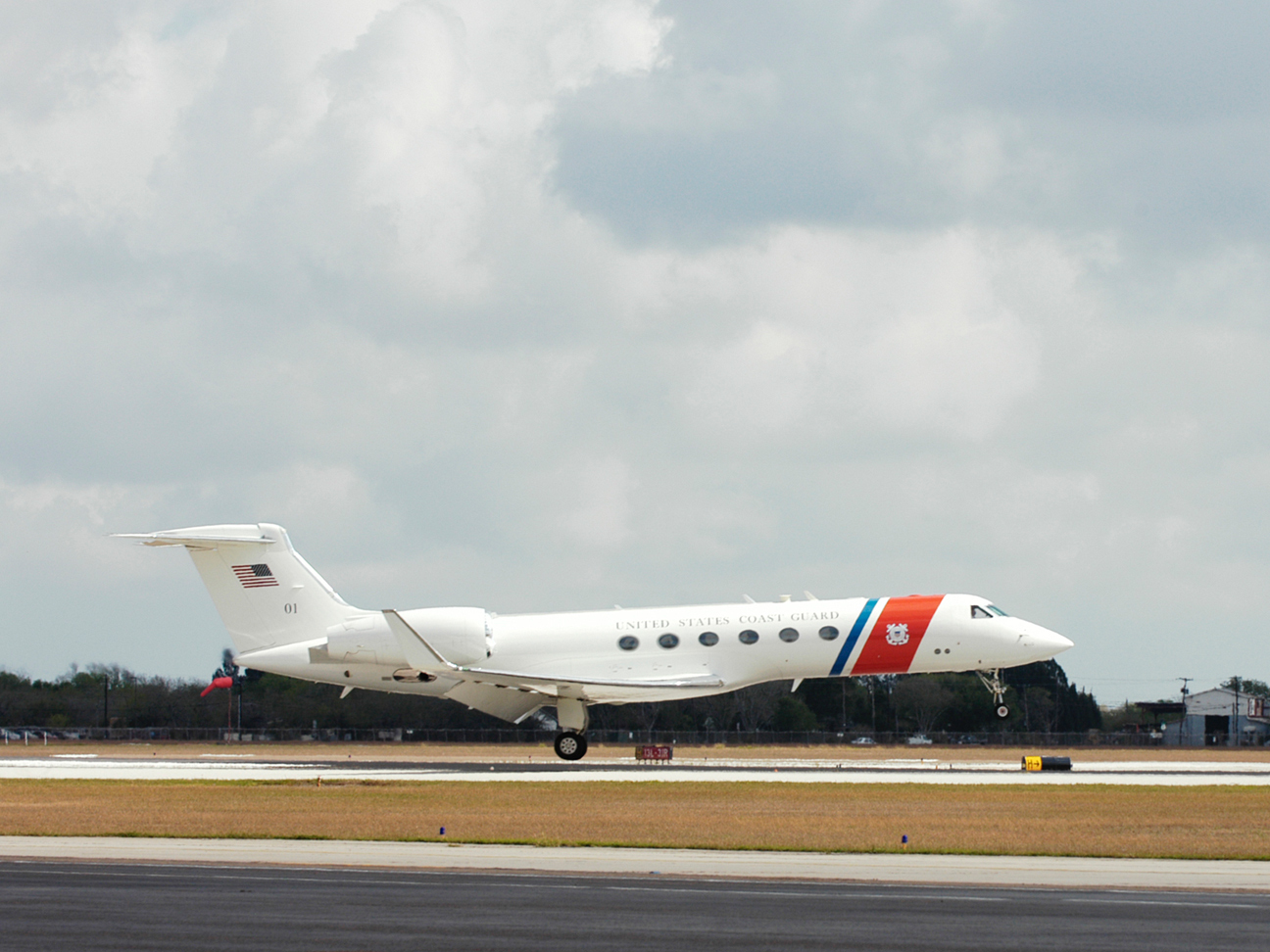 The US Coast Guard’s C-37A aircraft is primarily used for transporting leaders such as the secretary of homeland security and the commandant of the Coast Guard. Though a branch of the military, the Coast Guard is under the purview of the Department of Homeland Security and does not have its own cabinet secretary, unlike the Army, Navy, or Air Force.

Unlike other VIP military transport aircraft, the Gulfstream jet is parked at Ronald Reagan National Airport, where the Coast Guard maintains an air station. The aircraft is an unmistakable Coast Guard aircraft, with the branch’s racing stripe and emblem located on the front of the aircraft with “United States Coast Guard” emblazoned on the fuselage.

The US Navy and Marine Corps also have their own Gulfstreams, including the C-20G. The military variant of the Gulfstream IV business jet, the C-20G is used by the Navy and Marines for the transport of military leaders, government officials, and other dignitaries. The aircraft almost half the cost of the larger C-37 with a unit cost of $US37 for the C-20G and can fly around 5,100 nautical miles, according to the Navy.

The US Navy and Marine Corps do also maintain a fleet of the larger C-37s, used for VIP transport. The secretary of the Navy is one of the primary users of the aircraft, which is utilised for official travel and visits to bases and combat zones. Along with the Coast Guard, the aircraft do not feature the blue-and-white livery found on Air Force jets, but rather a low-profile paint with “Department of the Navy” written on the fuselage of some aircraft.

Some of the military’s private jets are used for more than just VIP transport, such as the E-11A. A modified Bombardier Global Express aircraft, the E-11A is a communications node that acts as a flying repeater and facilitates communications between various forces. The aircraft is particularly useful in allowing forces to communicate with their base when separated by mountainous terrain or other obstructions.

While no converted civilian jet aircraft are equipped with weapons, the Air Force called the plane “as essential to mission success as bullets.”