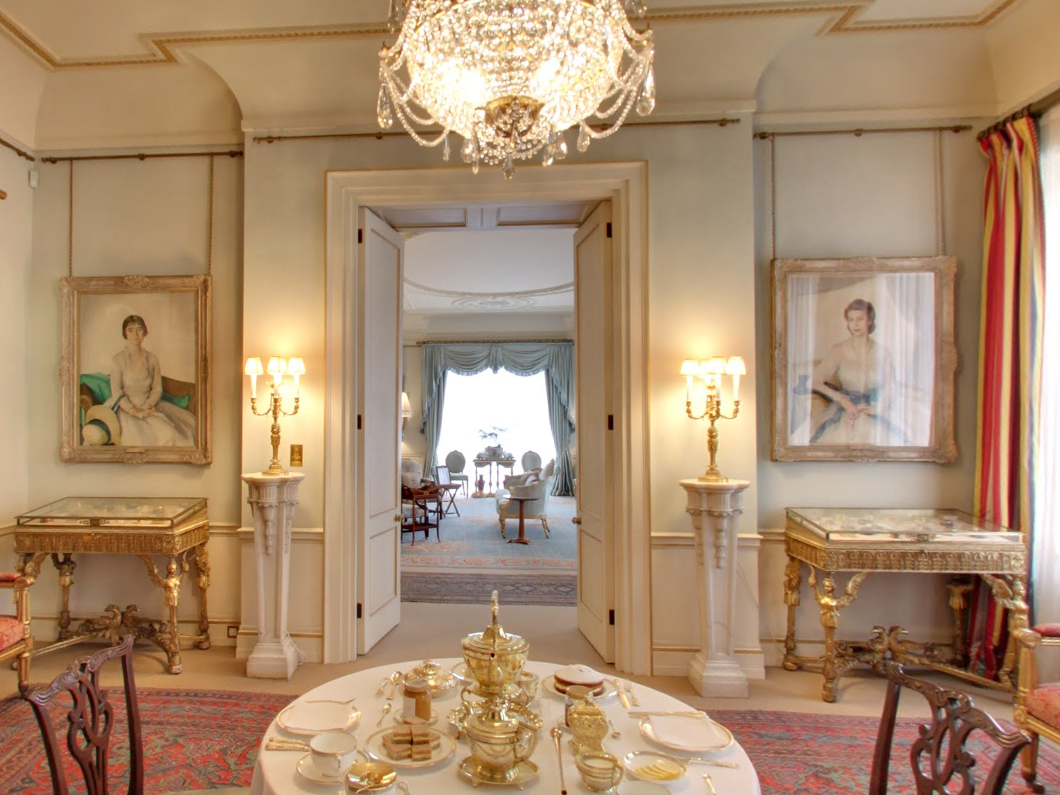 While royal life is often guarded by gates, guards, and secret traditions, Google offers fans a rare glimpse into what it’s like to be a royal.

In 2018, Google Arts & Culture created a virtual tour of Prince Charles’ residence, Clarence House, in London. Viewers can virtually walk through the residence that has been in the Windsor family for over 100 years.

Although the tour is only the ground floor of the house, it’s an intimate look at the place that Queen Elizabeth herself once called home.

Keep scrolling to get a closer look at the royal home and to see how Prince Charles honours his royal family throughout his residence.

Since 2003, Clarence House has been the official residence of Prince Charles and his wife Camilla, Duchess of Cornwall. Clarence House was built in 1827 for The Duke of Clarence who would later become King William IV. From 1953 to 2002, the Queen Mother called the four-story house her home. For a short time, Queen Elizabeth and The Duke of Edinburgh lived in the home after they were married in 1947. Today, it is the residence of Prince Charles.

Anyone who visits Clarence House is first greeted by the home’s lavish gardens. 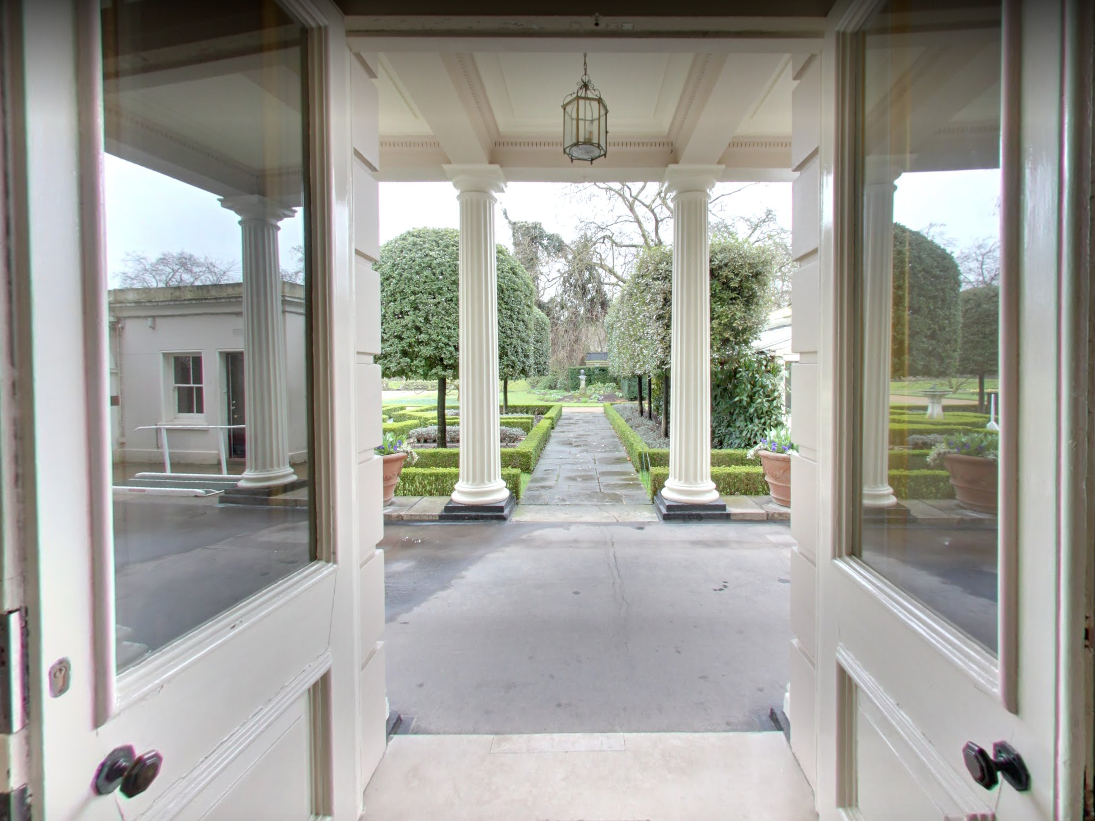 Prince Charles designed the gardens himself in 2005 to honour the home’s longest occupant, the Queen Mother.

The Entrance Hall to the home seems like a gallery of paintings and relics of the royal family. 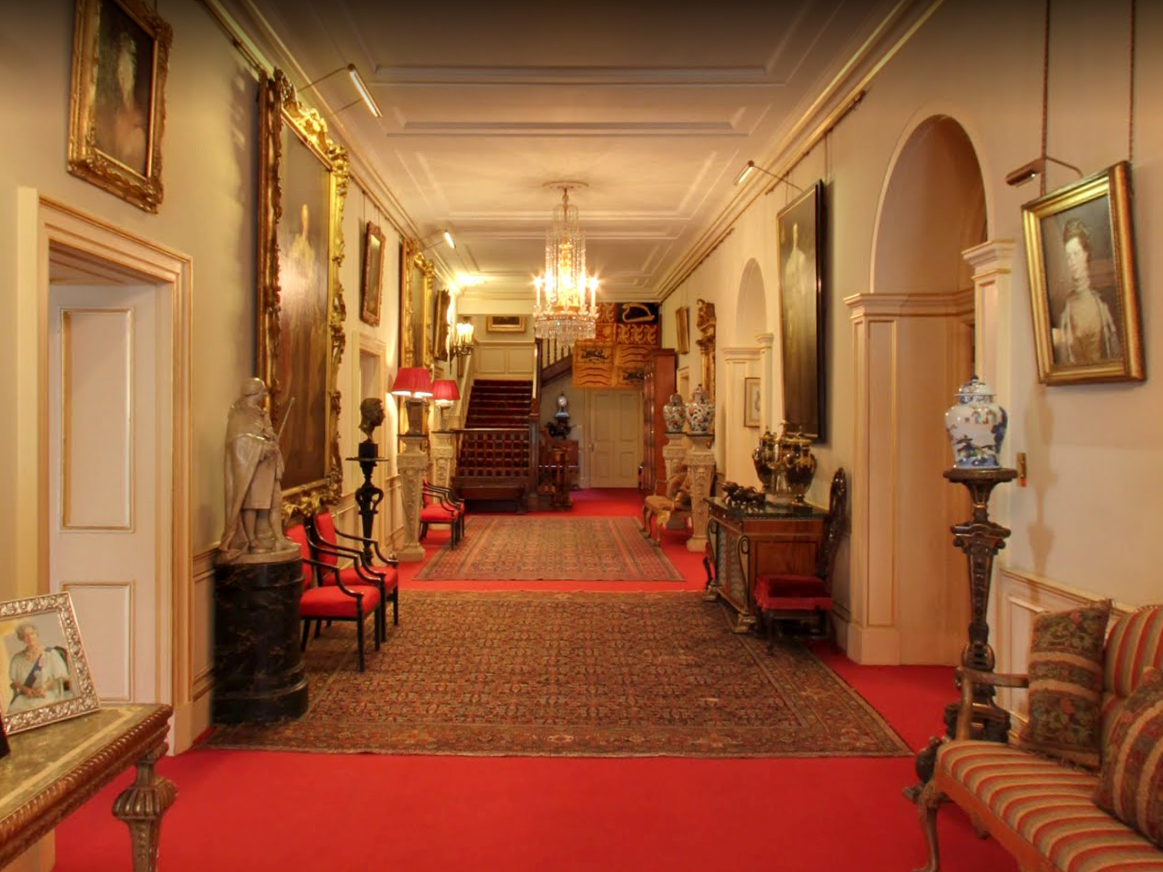 The Entrance Hall is decorated with portraits of King George VI and The Queen Mother, along with a famous tapestry called “The Formal Garden.” Although Prince Charles lives in the home, most of it has remained the way the Queen Mother designed it, including all of the artwork.

The first room off of the Entrance Hall is the Lancaster Room. 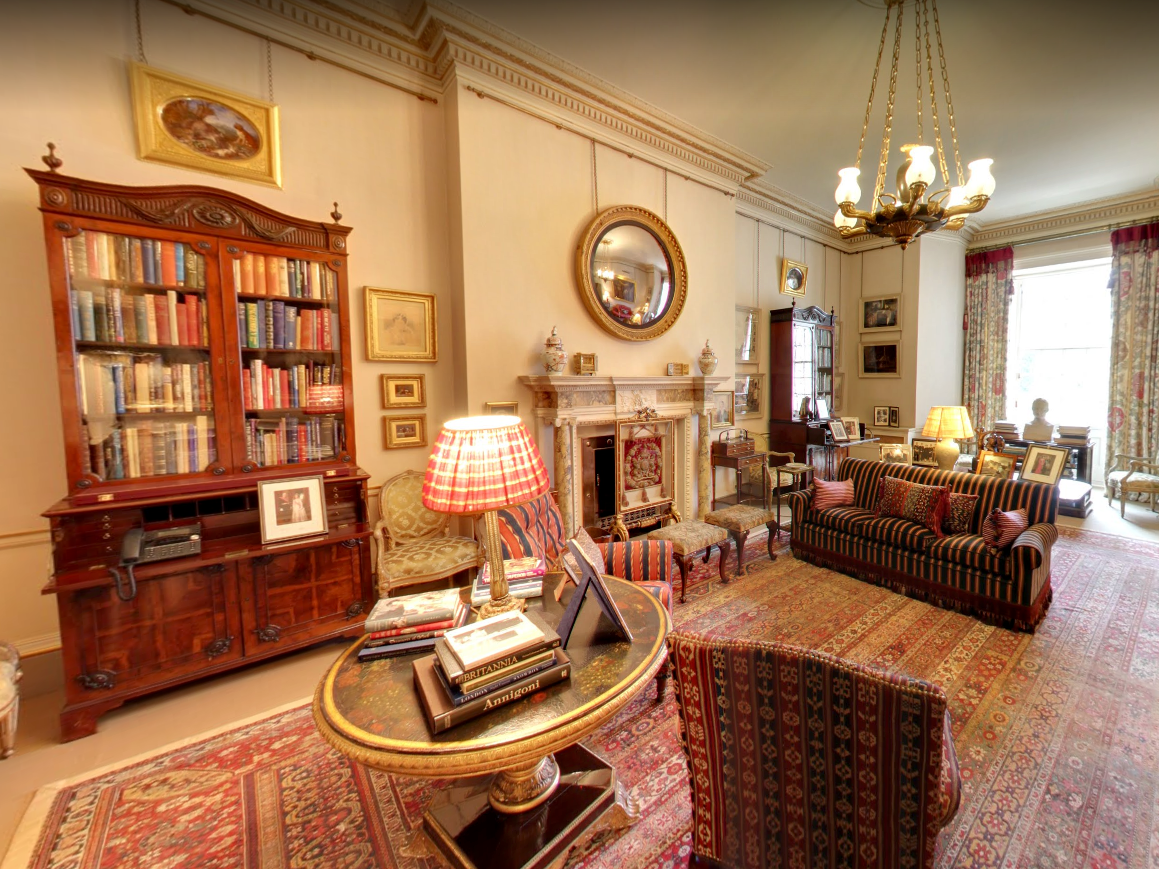 The Lancaster Room is a cosy space with upholstered furniture, a fireplace, and cases of books. It is used as a waiting room for guests to Clarence House. While waiting, visitors can observe eight of the watercolor masterpieces painted by John Piper in the 1940s.

The second door off of the Entrance Hall leads to the Morning Room, where the Prince of Wales entertains guests. 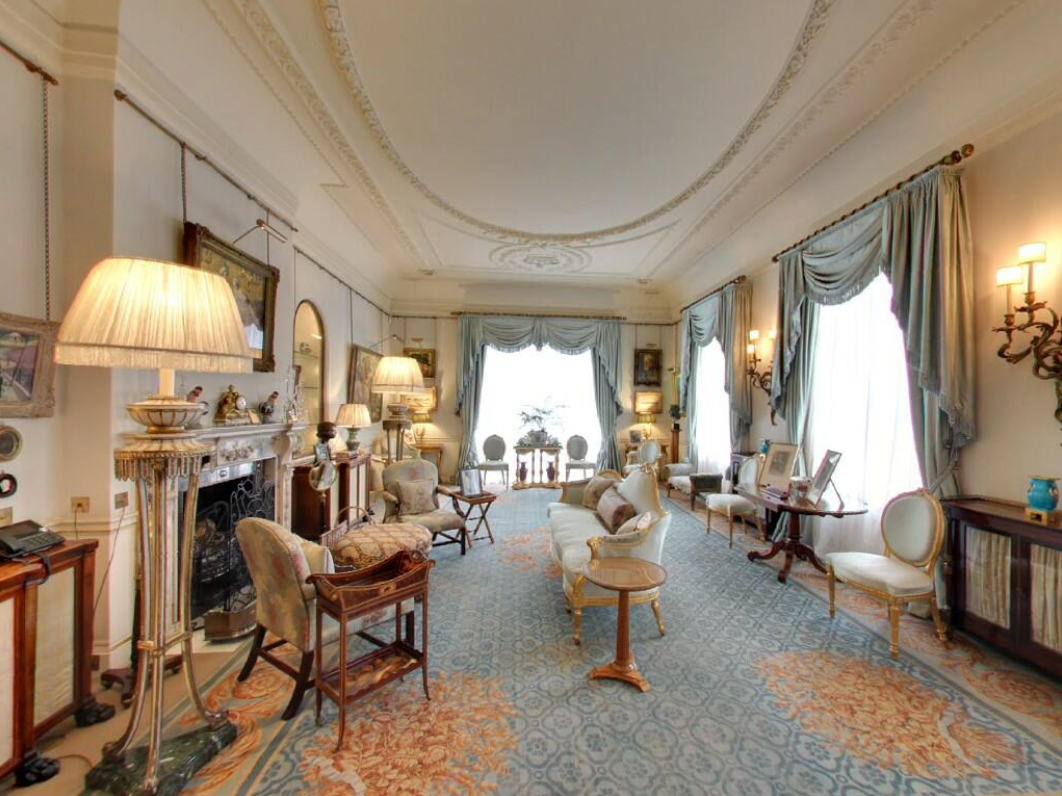 The upholstered furniture and blue drapery is the perfect setting for any reception. The family most recently used the room for Prince George and Prince Louis’ christenings.

When Queen Elizabeth lived in the house, the room acted as Prince Philip’s study. 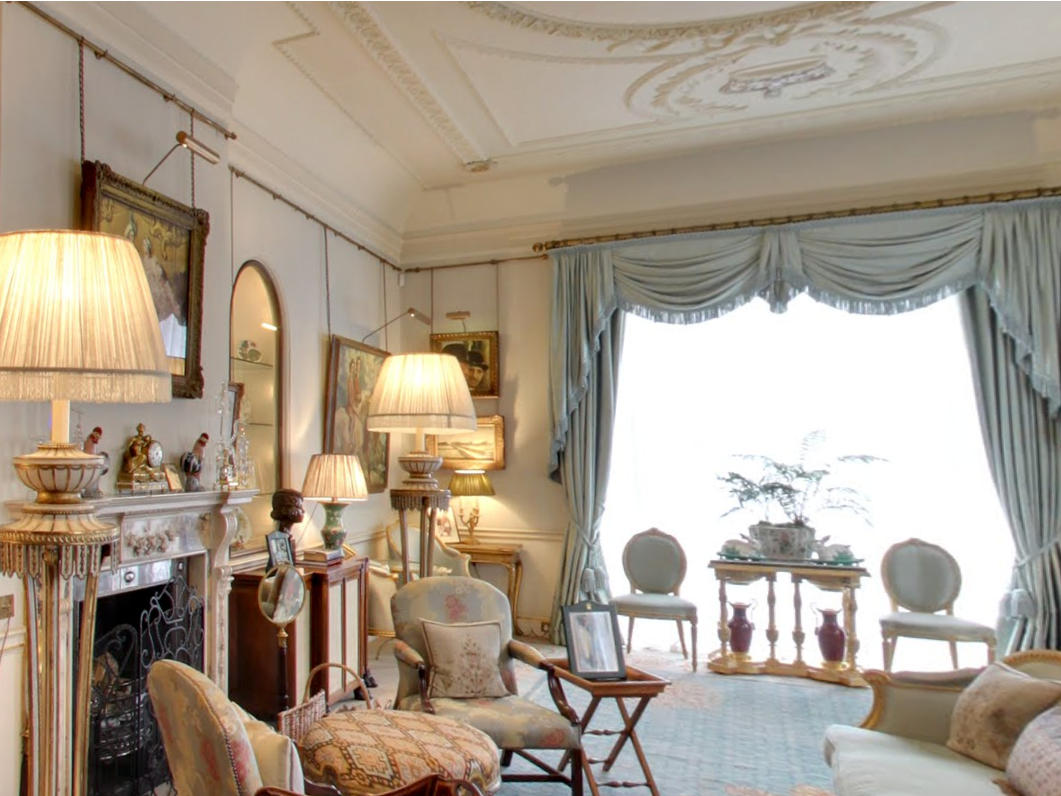 Today the queen’s stamp still remains in the Morning Room. If you look closely, you can see her crown adorned on the ceiling using plasterwork.

In one corner of the Morning Room, you can see family photos on display. 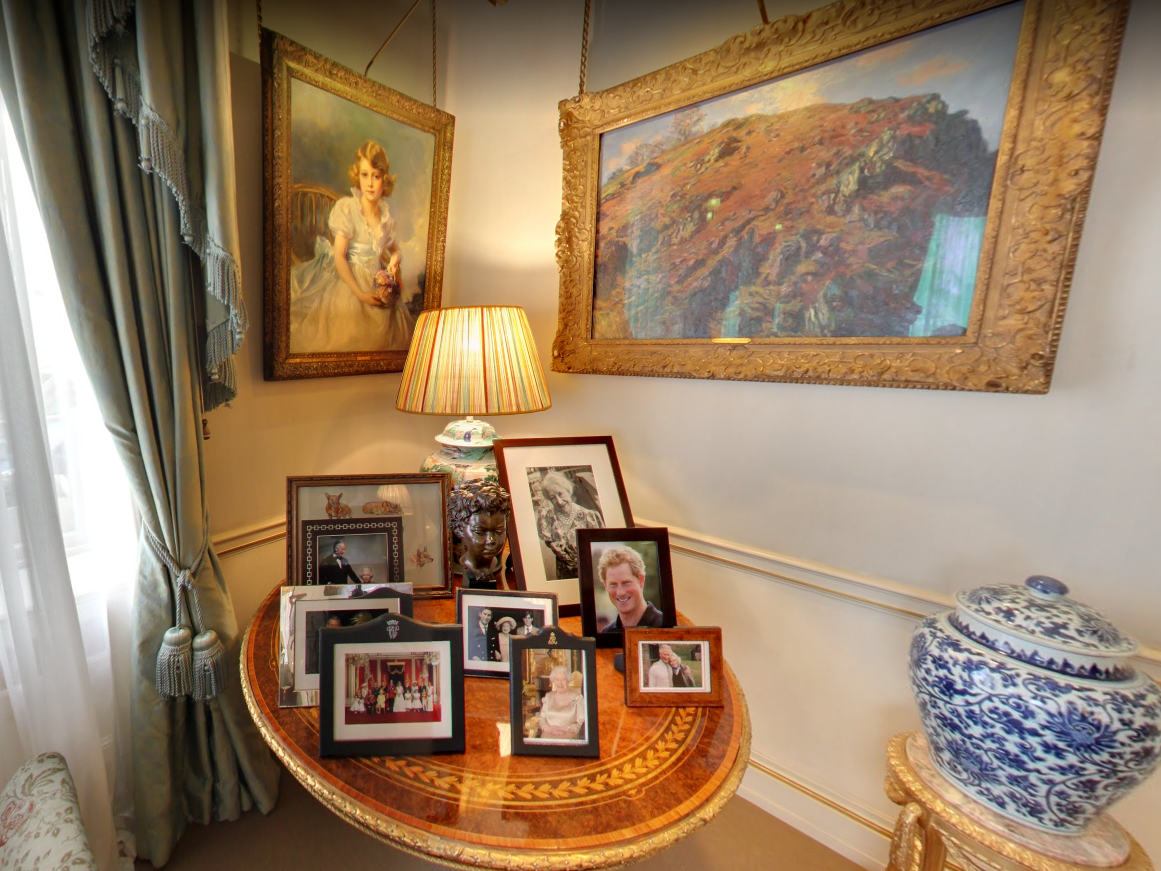 If you look closely, you can see Prince Charles’ mother, Queen Elizabeth, and his son, Prince Harry. Hanging on the wall is an oil painting of a young Queen Elizabethby Philip de Laszlo.

The Morning Room leads into the Library. 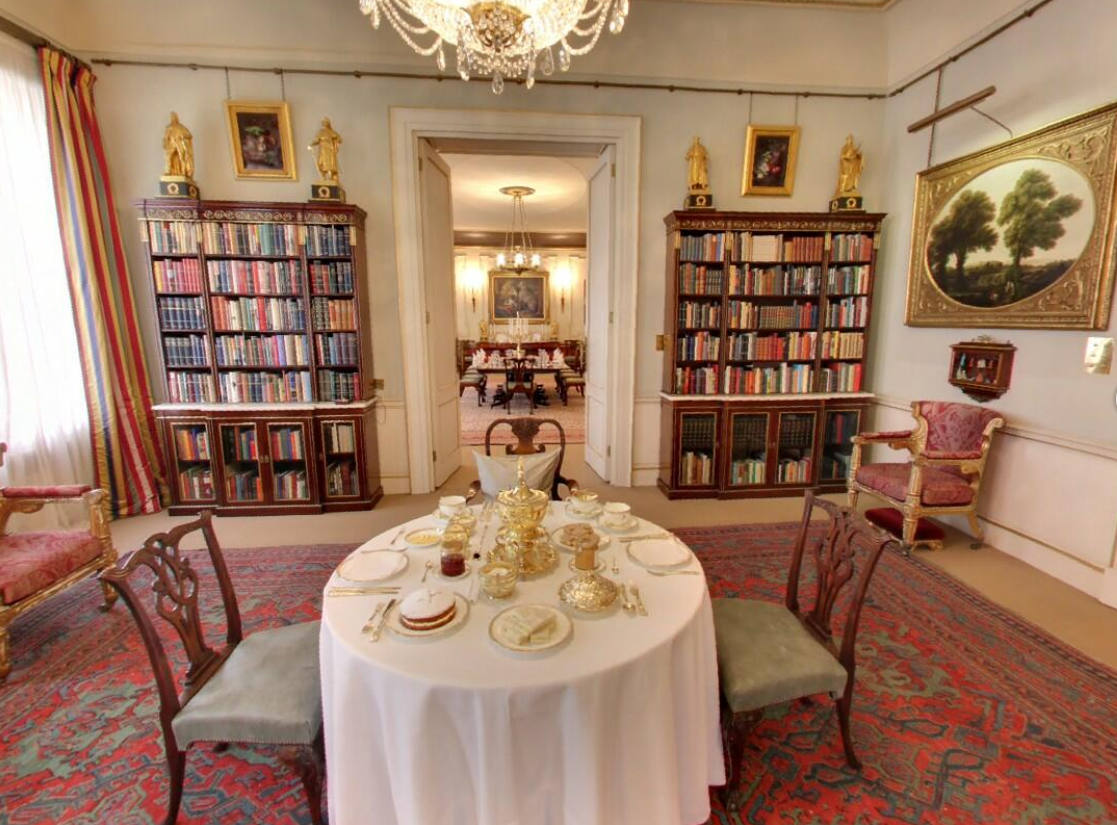 The room was originally designed to be a smaller dining room, but Princess Elizabeth and the Duke of Edinburgh decided to add bookcases, turning the space into a library of sorts. Prince Charles sometimes uses the room to drink tea with different heads of states.

The Library then leads directly into the elaborate Dining Room. The Dining Room is the room Prince Charles has changed the most. According to Google Arts & Culture, he chose to add a striking bronze covering to the ceiling. Above the fireplace is a portrait of Prince Charles’ grandmother, the Queen Mother.

The tour takes you through quirky corridors and hallways walked by royals and dignitaries from around the world. 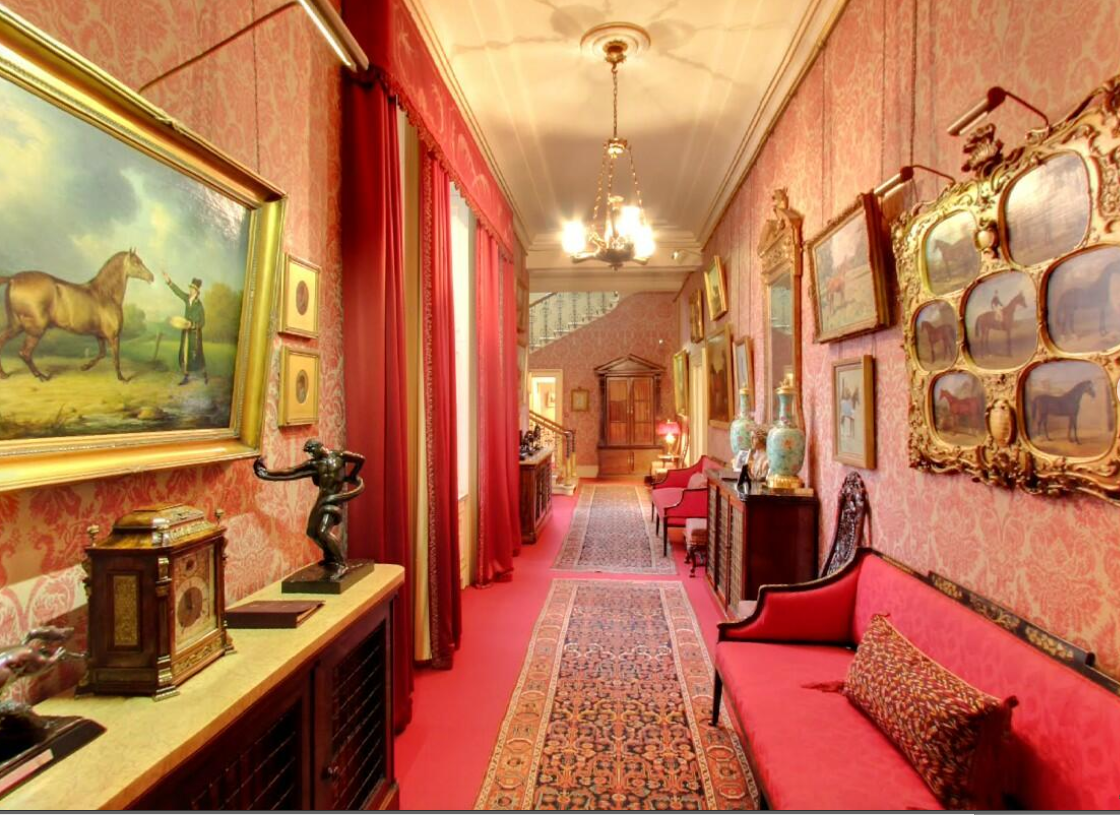 This corridor pays tribute to the Queen Mother’s love of horses.

The corridor leads to the Garden Room, which offers some of the best views. 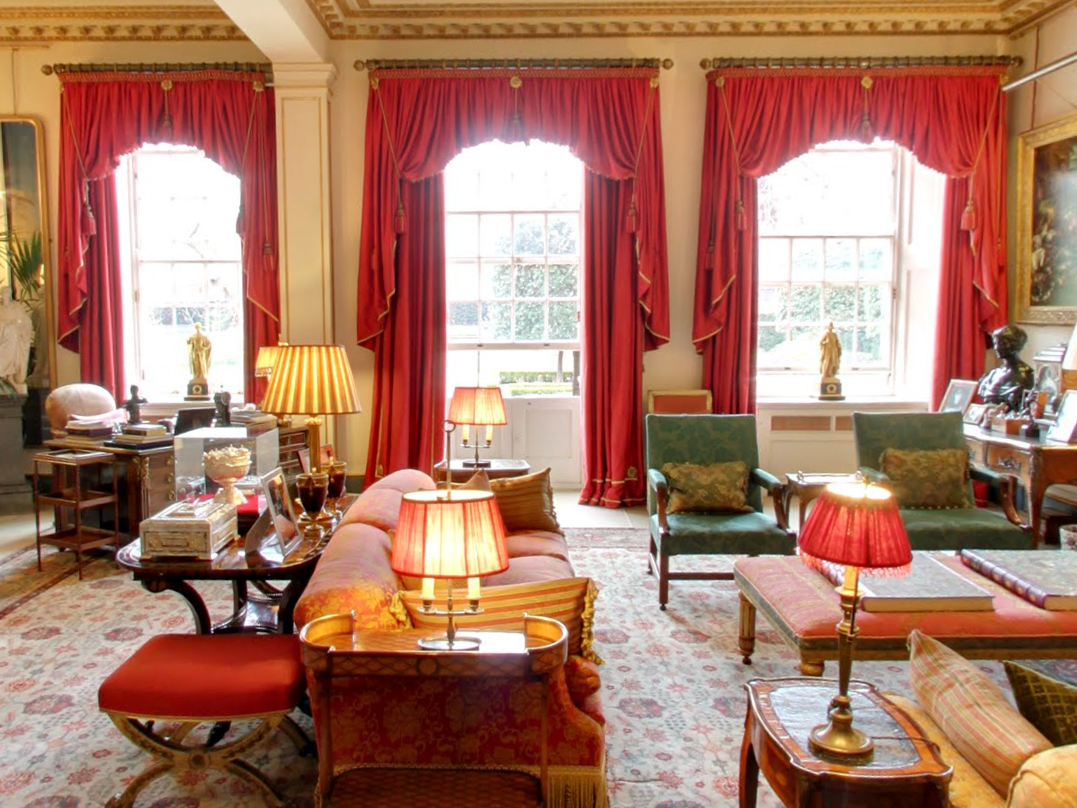 The Garden Room aptly offers the best views of the home’s lush gardens and acts as an additional sitting room.

The room also houses a golden harp and grand piano. 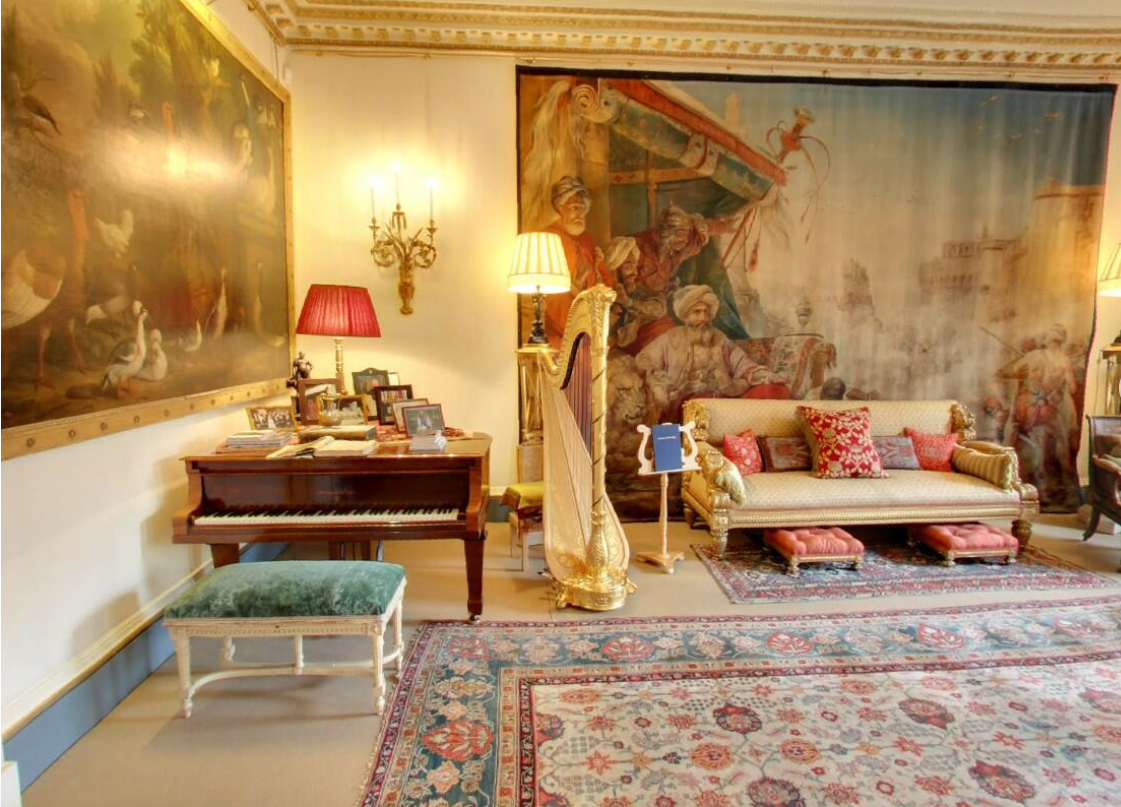 The instruments can be used to entertain guests.

More family photos grace the top of the piano. 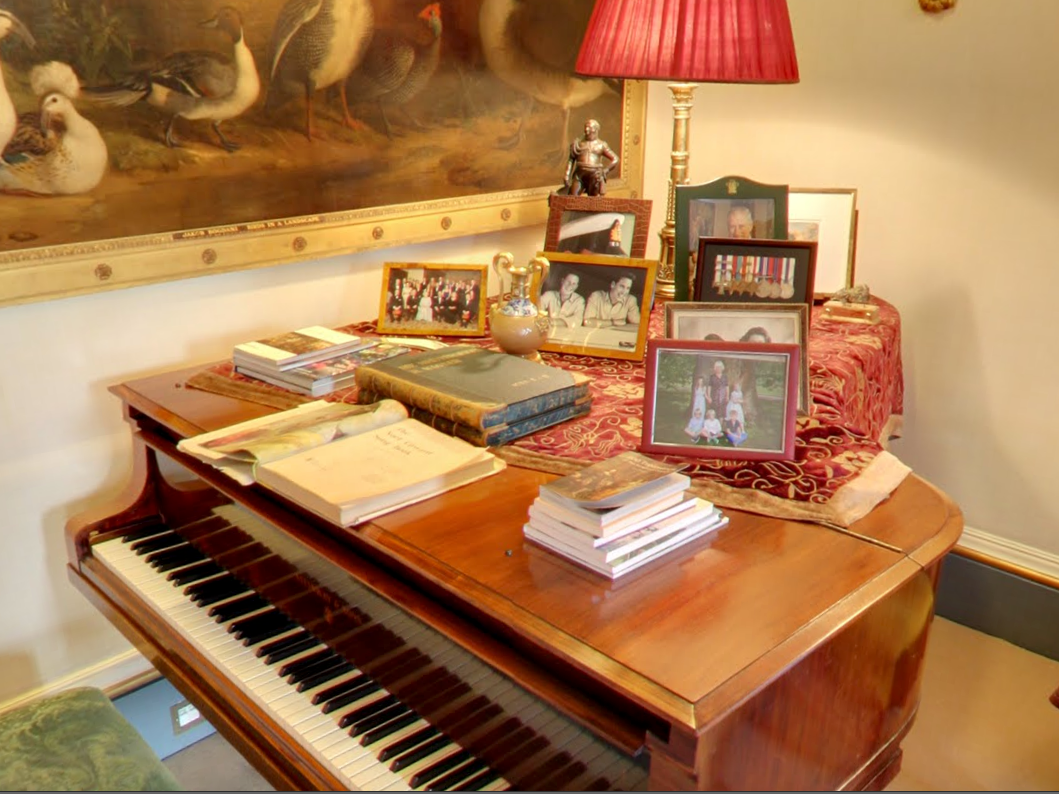 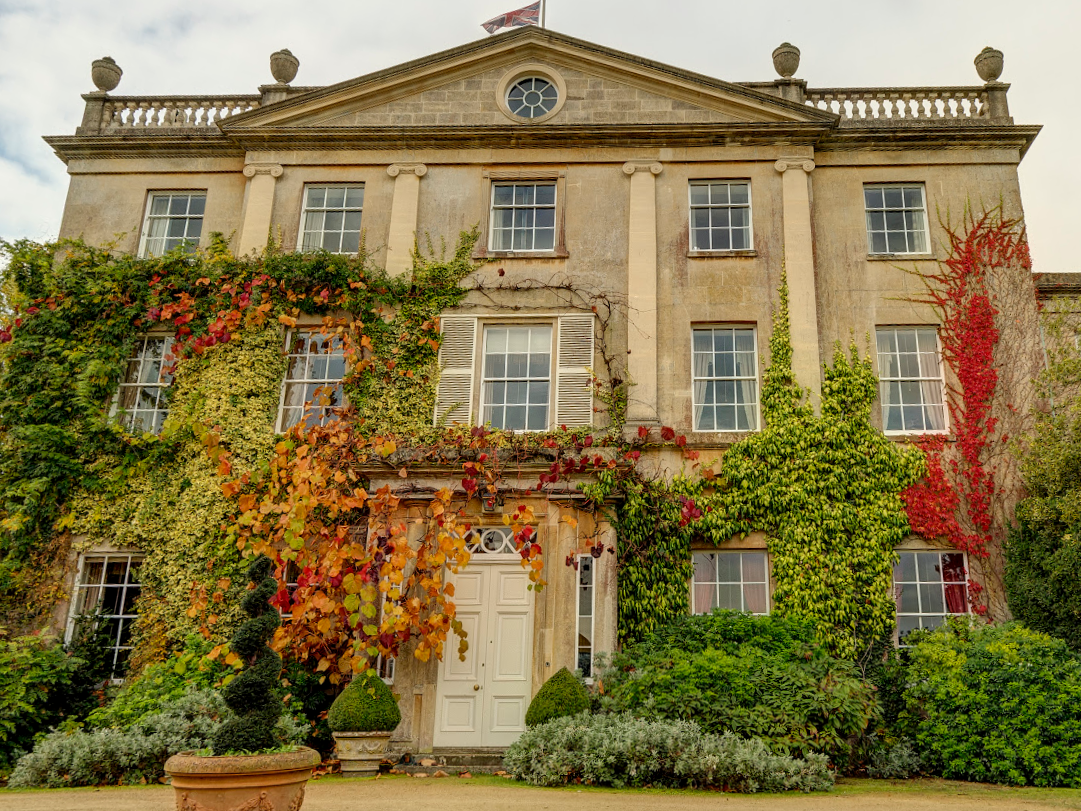 Prince Charles has called Highmore in Gloucestershire his private residence since 1980, according to Google Arts & Culture.

While the tour does not take you inside the house, it does offer some great views of the ground’s lush gardens. 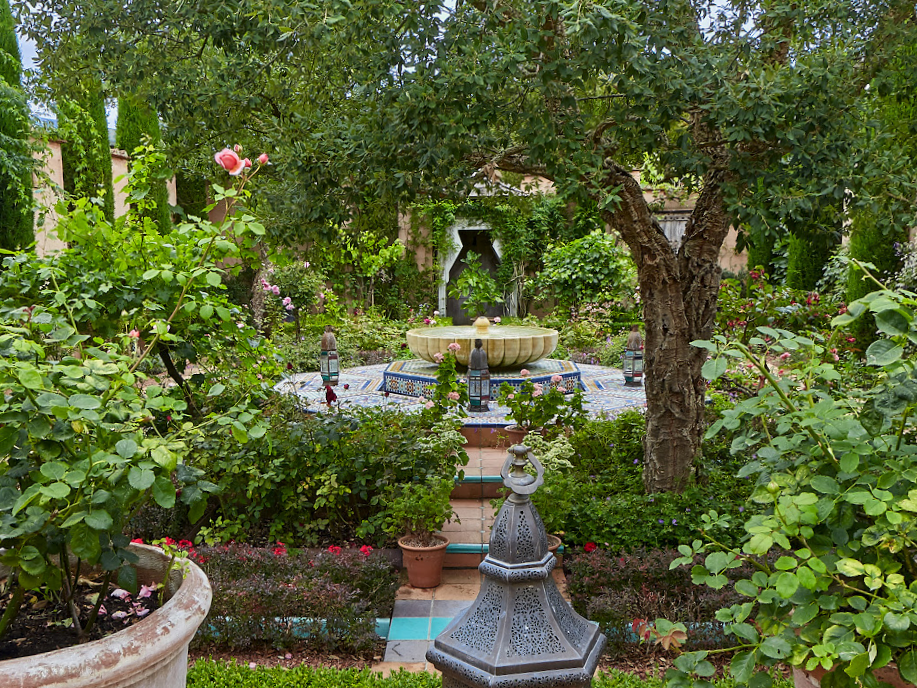 Like Clarence House, Prince Charles redesigned the gardens of Highmore to include a rose garden, an irrigation system, and even a sundial. The future king has been outspoken about his passion for gardening and nature, and it’s evident in his estates.