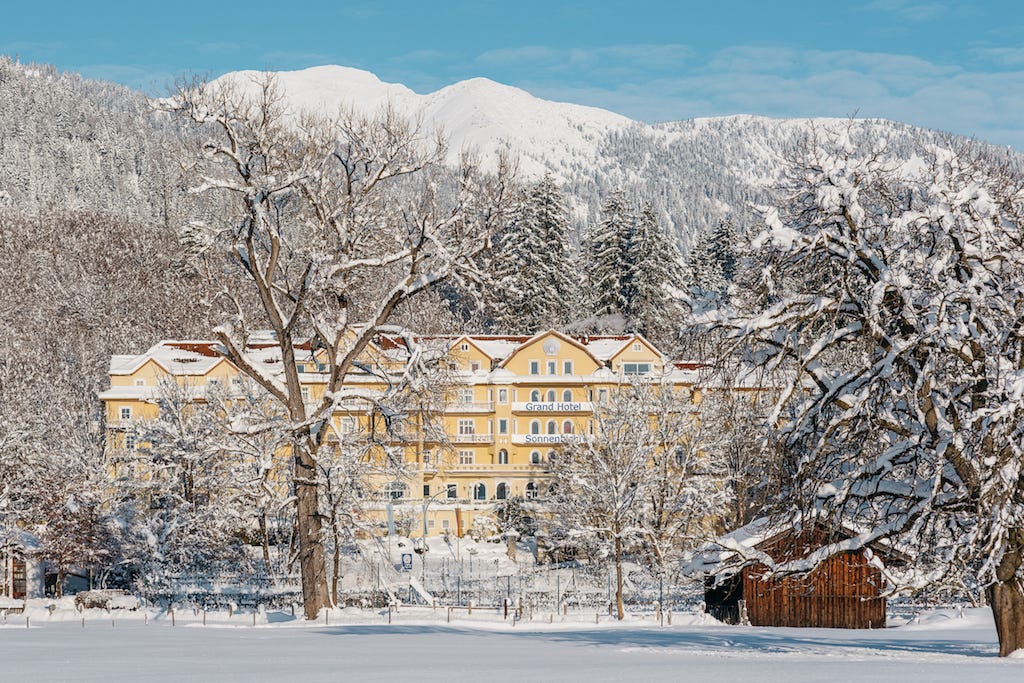 King Maha Vajiralongkorn has reportedly rented out a four-star hotel in the Bavarian Alps for himself and his entourage of 20 women. The remainder of Germany’s hotels have closed to tourists to prevent the spread of the coronavirus, and Thailand declared a month-long state of emergency on March 26. 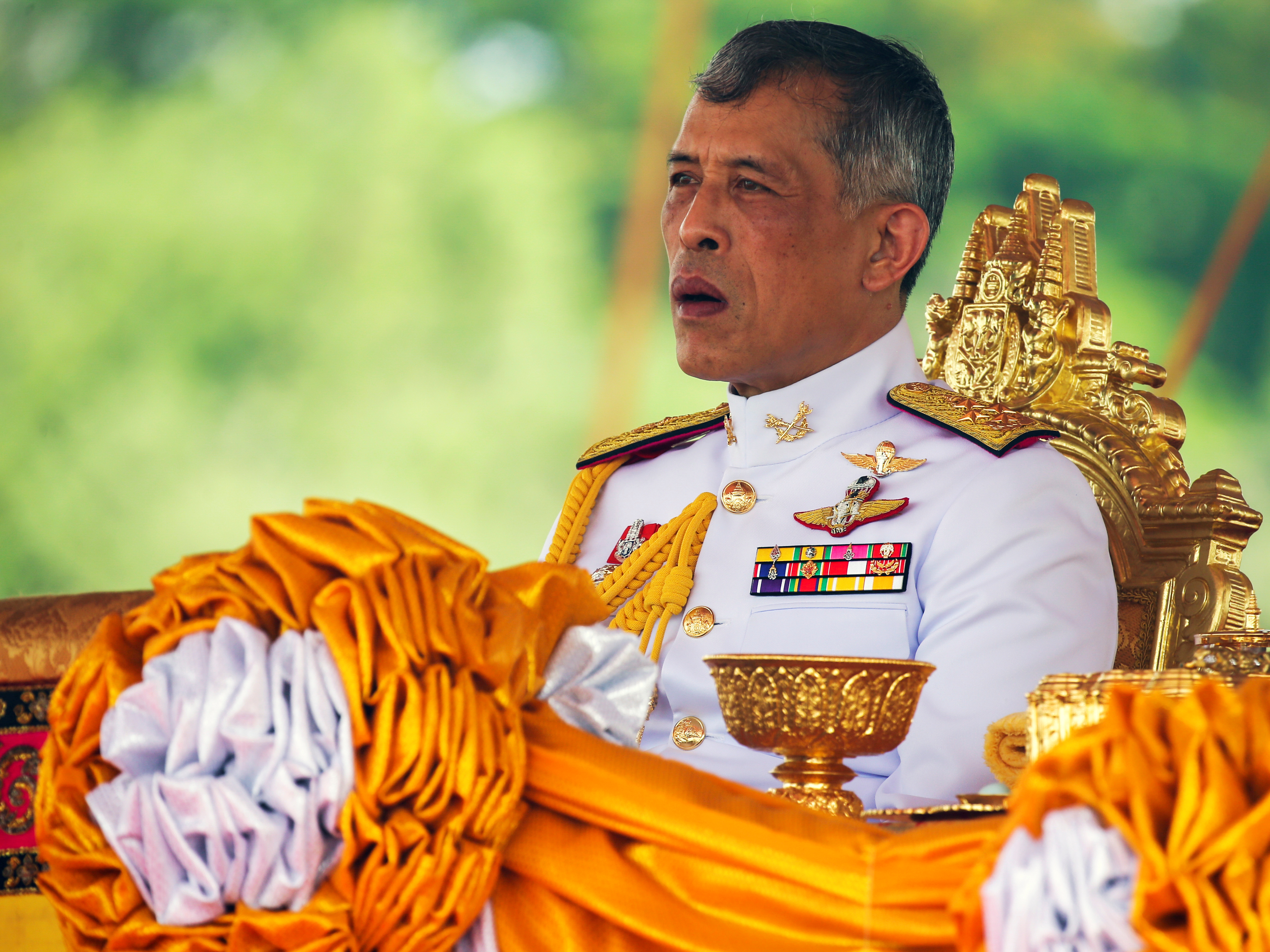 Source: The Local, The Times of London, Bloomberg

Thailand’s “lèse majesté” laws protect King Maha Vajiralongkorn and other members of his family from bad press, but this didn’t stop Twitter users from tweeting “Why do we need a king?” in Thai over 1.2 million times following reports that the king had fled Thailand for Bavaria.

While press about the royal family is restricted in Thailand, the king made headlines in October when he stripped his royal consort, a longtime girlfriend, of all titles after she allegedly disobeyed and tried to make herself equal to his wife, the queen. 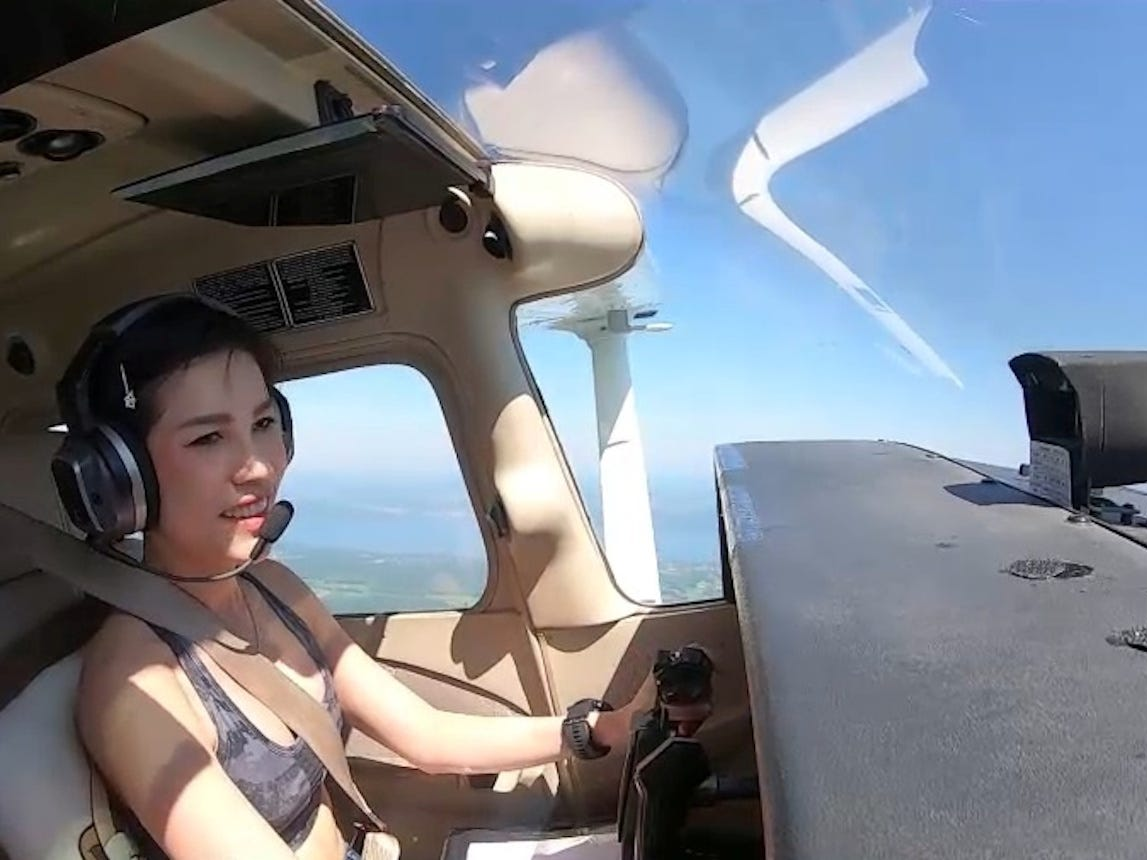 Maha Vajiralongkorn is a known womanizer. He has been married four times and has fathered seven children by three women. He is also avid cyclist and gave his pet poodle a four-day Buddhist funeral in 2015. It is unclear whether his wife is with him in Germany. 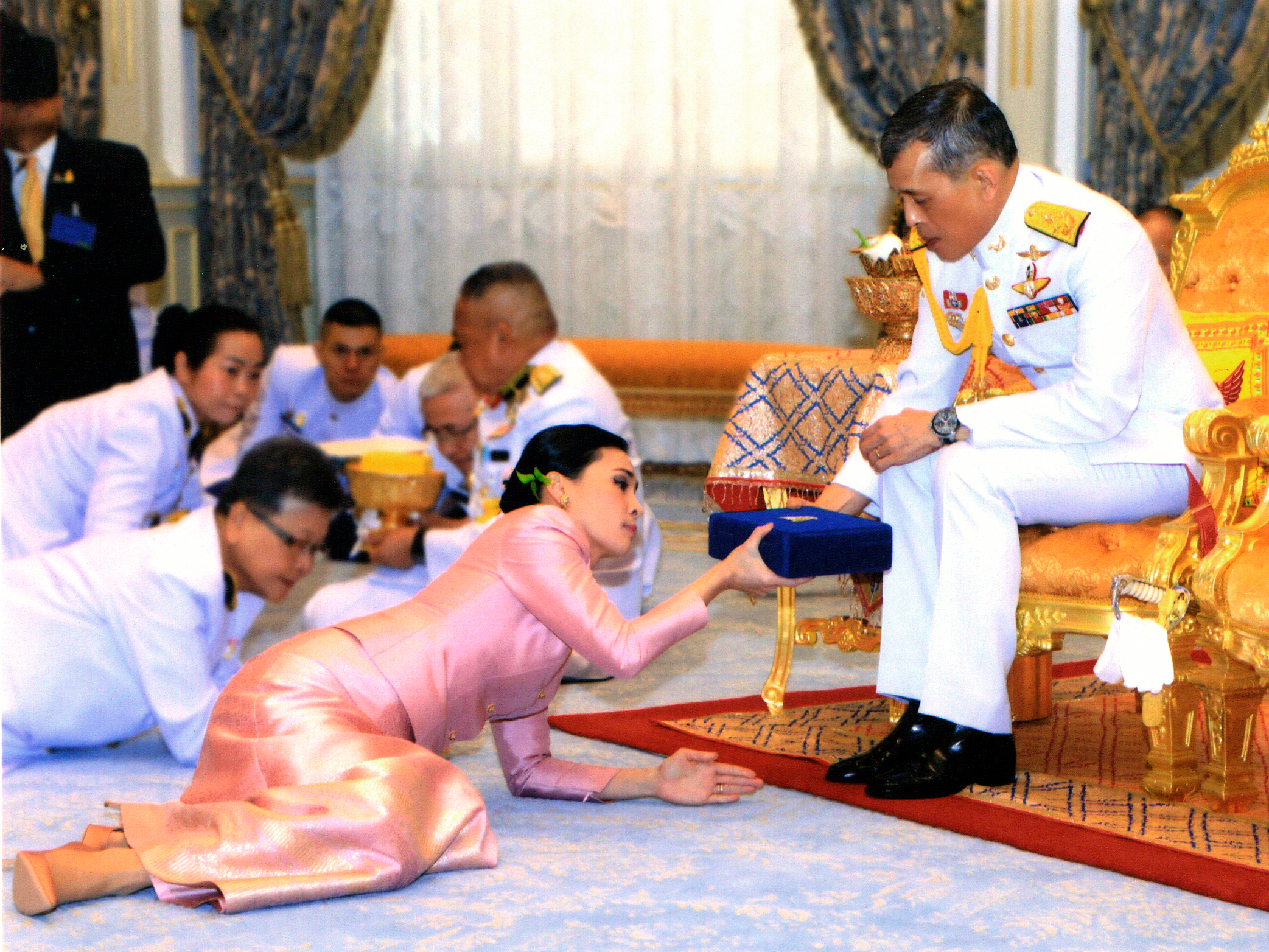 Associated PressThree days before his coronation, Maha Vajiralongkorn married his fourth wife, Suthida, who was his a longtime partner and personal bodyguard, in a surprise ceremony on May 1, 2019 in Bangkok, Thailand.

The Grand Hotel Sonnenbichl where the king and his female entourage are reportedly staying is located in Garmisch-Partenkirchen, about an hour south of Munich. Maha Vajiralongkorn is believed to own a lake house on nearby Lake Starnberg. 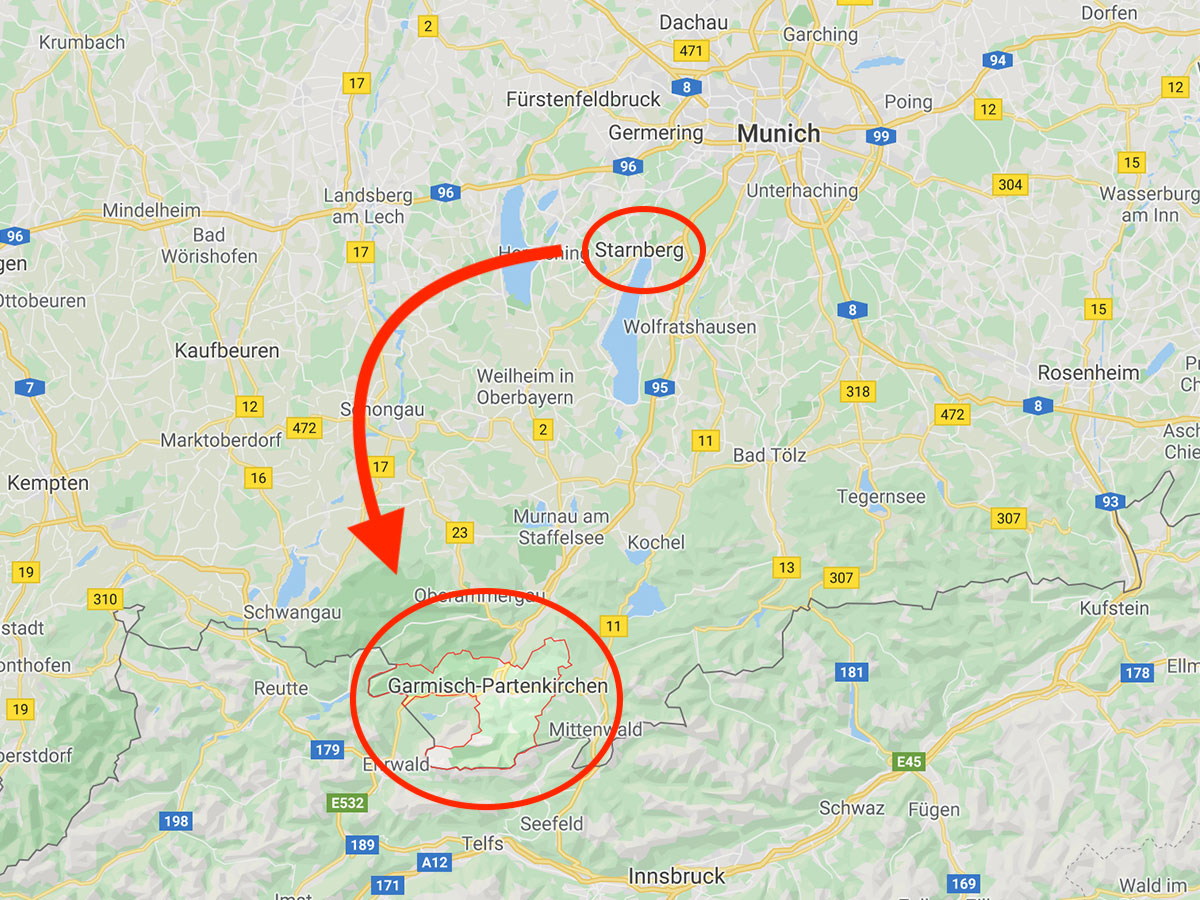 Source: The Times of London

According to German news publication Bild, the hotel received “special permission” from local authorities to remain open for the king and his party.

Source: The Times of London

Garmisch-Partenkirchen is known for its skiing, Alpine scenery, and hiking trails. This live webcam streaming from the region’s 1936 Olympic Stadium offers a glimpse of the town and surrounding mountains.

The Grand Hotel Sonnenbichl dates back to 1890 and was used by the Nazis as a medical hospital during WWII. It returned to its former operations beginning in the 1960s. 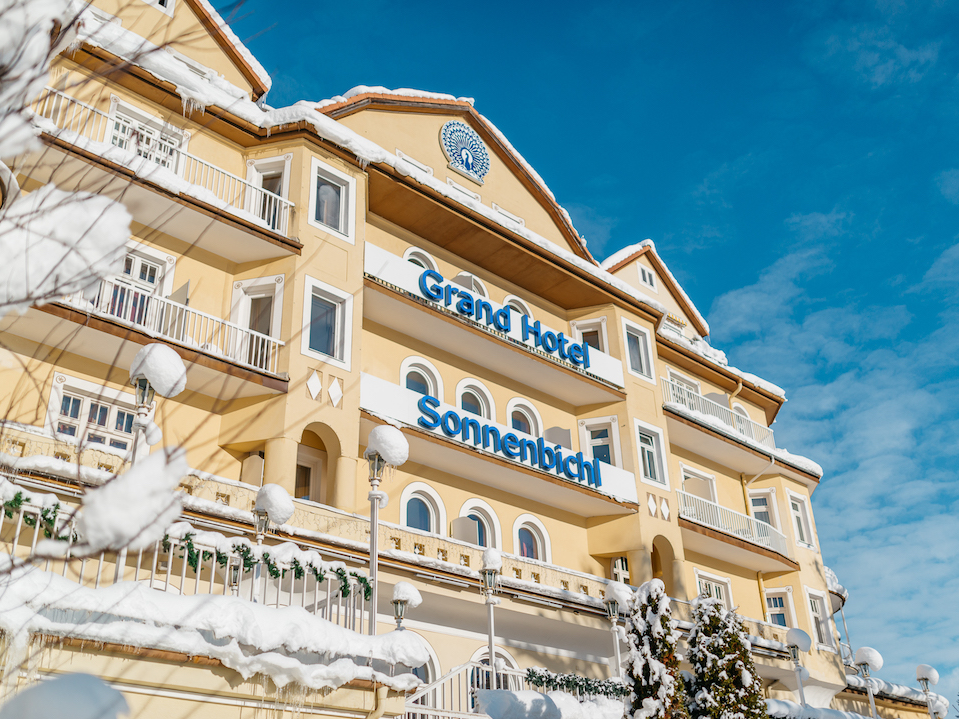 Today, the 130-year-old hotel touts spectacular views of Zugspitze, Germany’s highest peak. In the warmer months, guests can soak up the scenery from the Panorama Terrace. 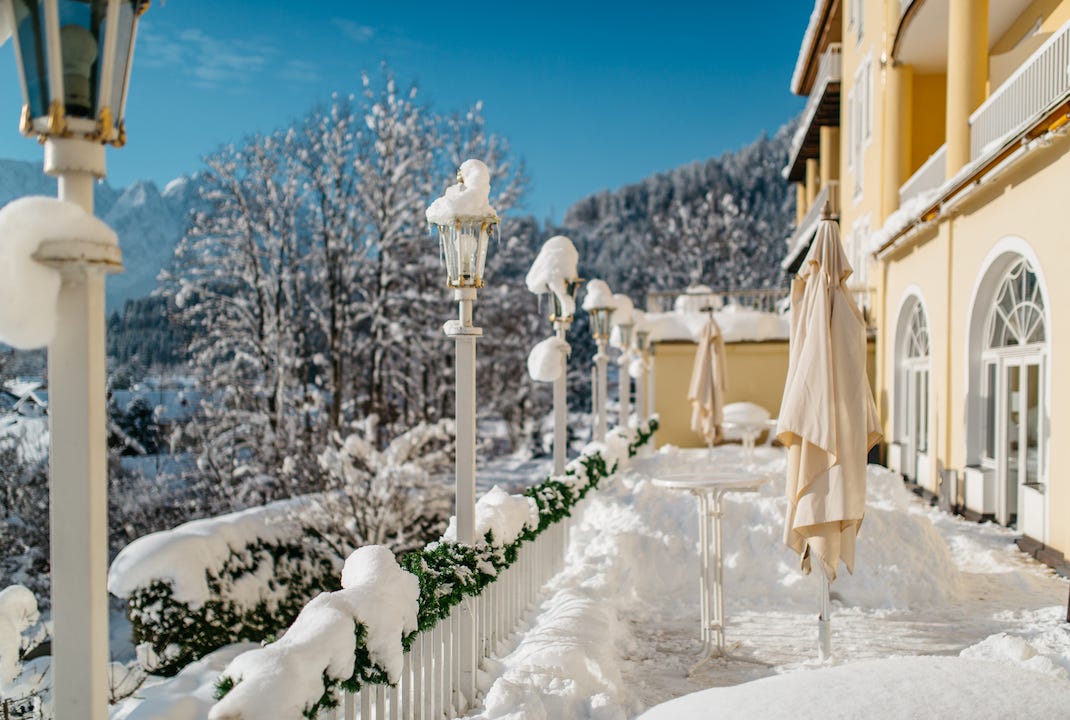 The indoor swimming pool is another scenic spot, boasting a large window front and panoramic view of the Alps. In addition to the pool, the hotel has a sauna and fitness studio. 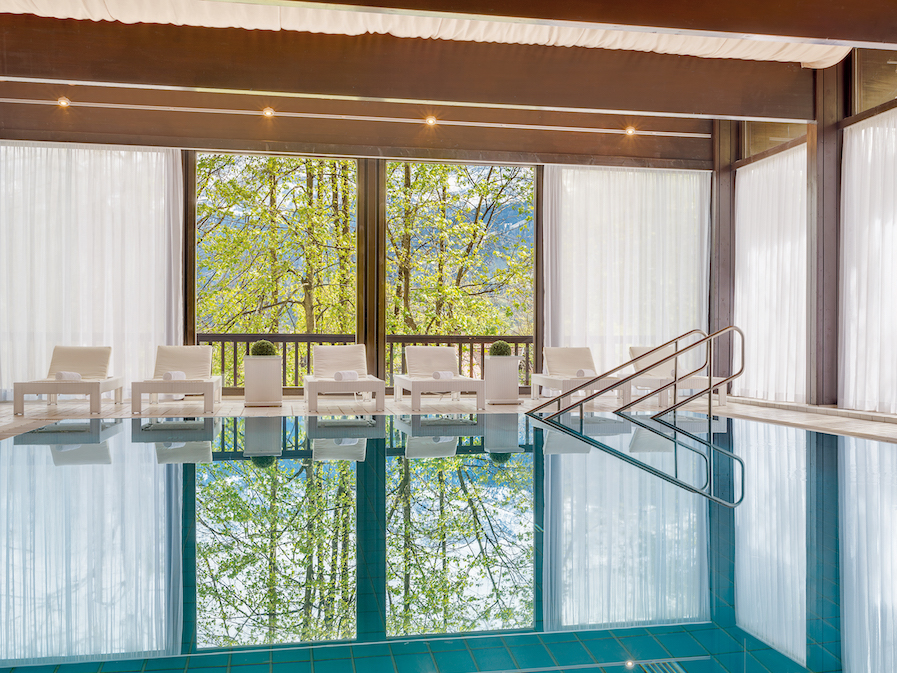 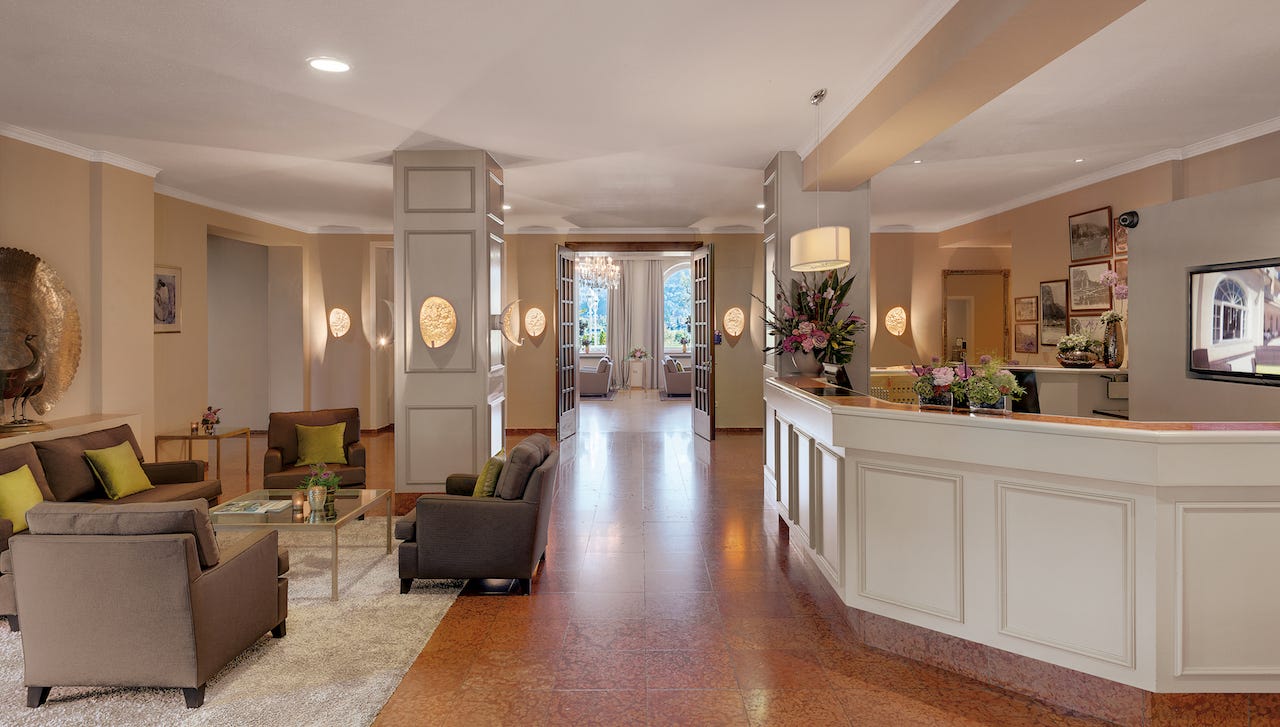 Peacocks seem to be a theme. The lobby features a peacock statue … 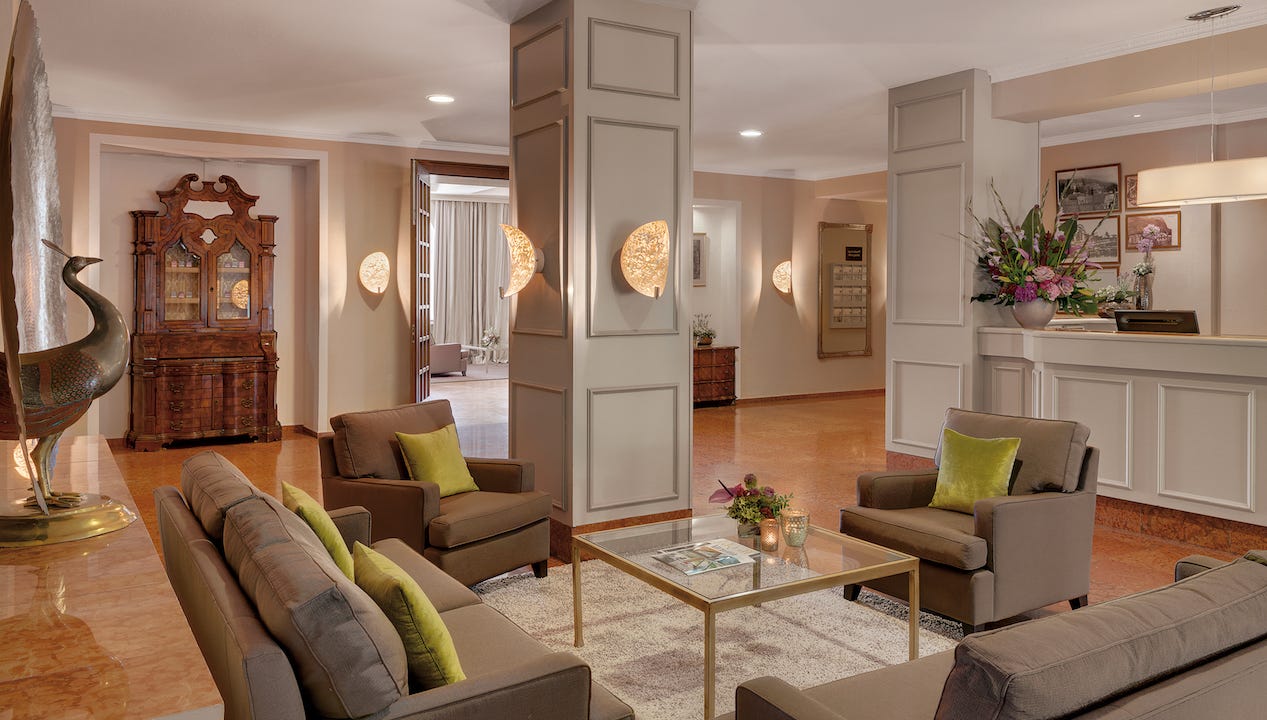 … and the hotel bar is called Peacock Gin & Co. Bar. In addition to the bar, the hotel offers guests a 24-hour room beverage service. 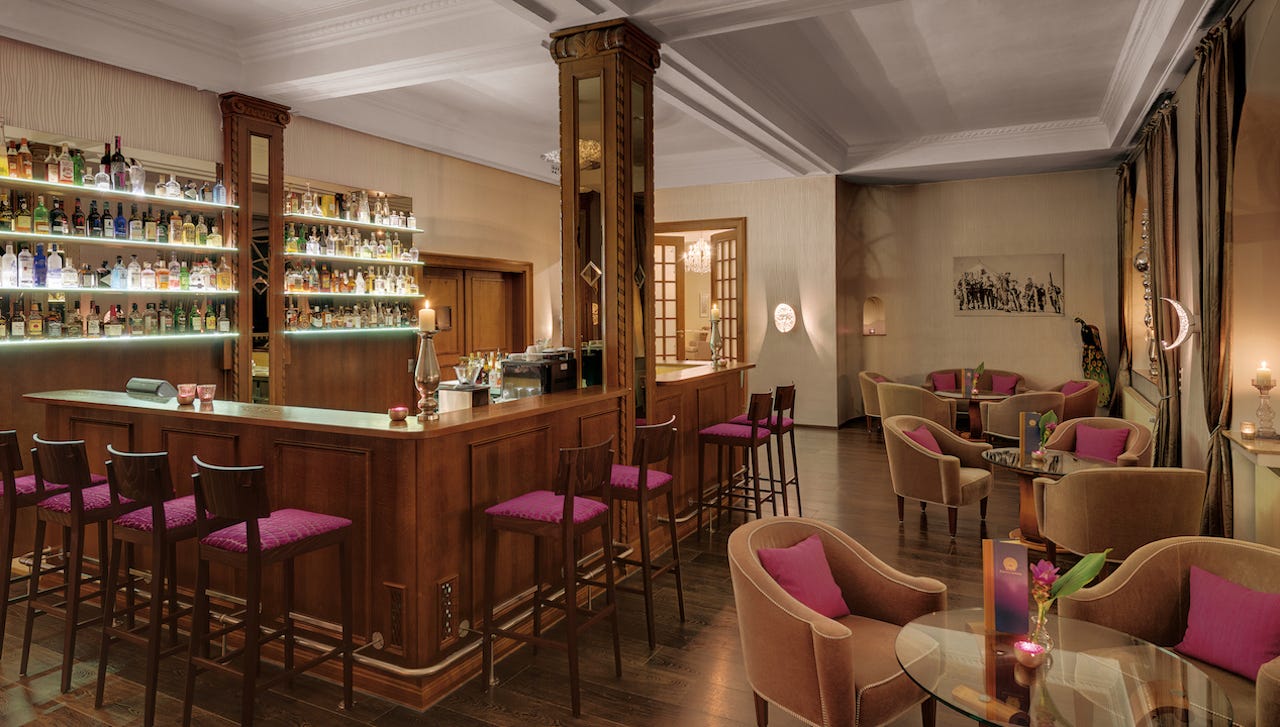 The hotel has a total of seven rooms including two “King Ludwig II” suites. Named after a former King of Bavaria, they boast views “fit for a king,” the hotel website says. 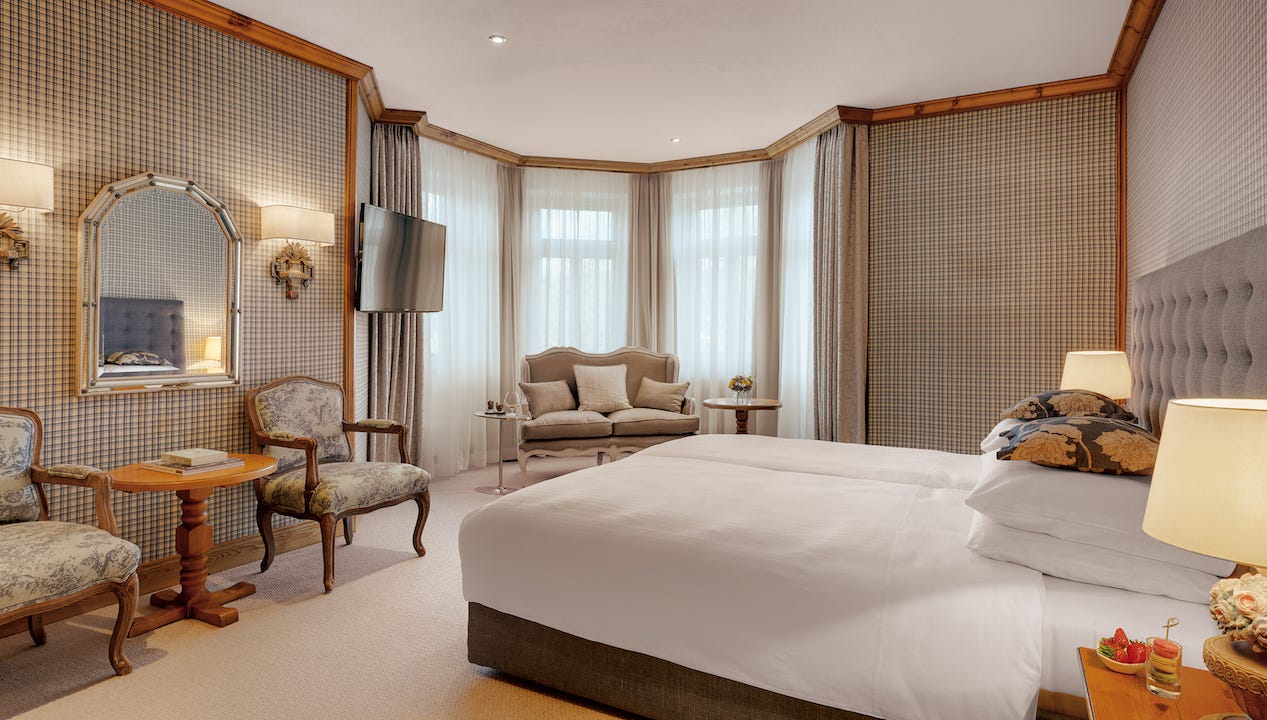 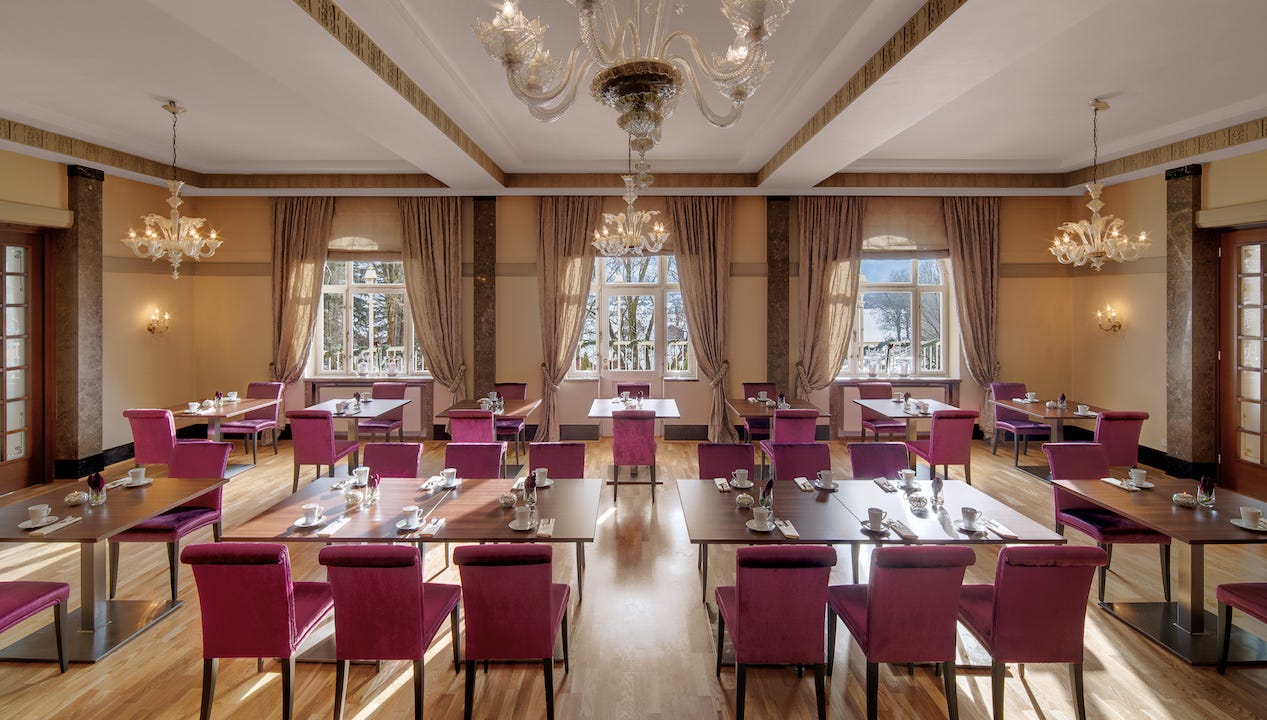 The hotel features a number of other dining and event spaces, including this Stone Pine Room where, from November through March, guests can order fondue, among other seasonal delicacies. It is not known what services the hotel is offering at this time. 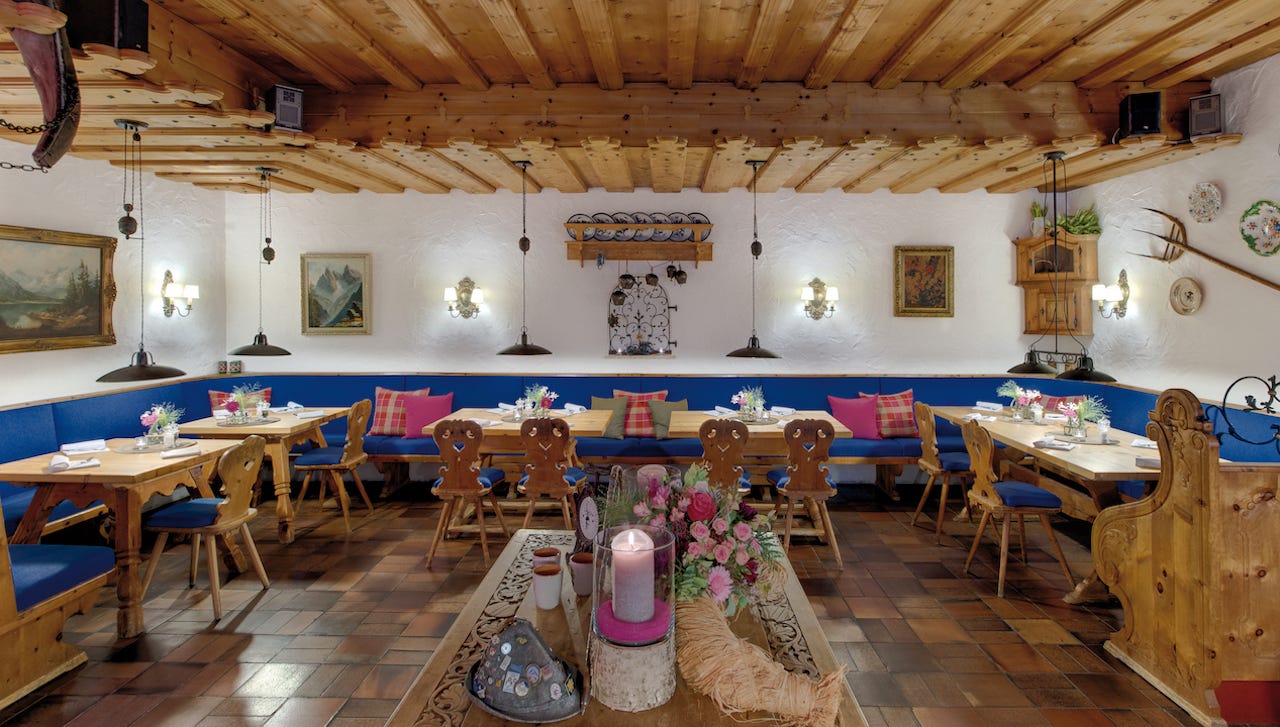