Issa Rae has jokingly responded to a member of the Alpha Kappa Alpha sorority who didn’t appreciate the organization’s portrayal on HBO’s newest episode of “Insecure.”

The fifth and final season of “Insecure” premiered on Sunday night with an episode that features the show’s central group of friends at a Stanford University alumni event. Tiffany (Amanda Seales) sported the pink and green AKA colors throughout the episode, and at one point wore a sweater with the Greek letters on it.

Seales posted an Instagram story addressing the comments and criticism she was receiving about the inclusion of the letters. Seales said that she is not an actual AKA member, but her character is.

There are some former and current AKA members who believe it’s “disrespectful” for a non-sorority member to be seen wearing their Greek letters.

“Okay so hold up,” one person wrote on Twitter, tagging both cocreator Issa Rae and the official “Insecure” account. “This girl is not a Soror and had my SHIELD on her body?! [Issa Rae] [Insecure HBO] please do not do that again. That’s wildly disrespectful!”

Rae quote-tweeted the person, dismissing the criticism with a joke about needing to undo an upcoming episode so as not to show the AKA letters again.

“Oh shit, let me tell [HBO] to delete the one of the upcoming episodes then, hold on,” Rae wrote on Twitter in response to the tweet.

Alpha Kappa Alpha Sorority, Incorporated is the first historically Black sorority, founded at Howard University in 1908. Notable alumni include Vice President Kamala Harris and Toni Morrison. According to the organization’s website, the AKA badge, coat of arms, and name are all federally registered trademarks.

A representative for the Alpha Kappa Alpha Sorority did not immediately return Insider’s request for comment.

Actress Yvette Nicole Brown joined the conversation, declaring she had no problem with the portrayal.

“I am a Silver Soror of [Alpha Kappa Alpha Sorority] and I had NO problem with how hard ‘Tiffany’ reps my beloved AKA,” she wrote on Twitter. “I feel [Amanda Seales’] pain in this. Folks think I’m Shirley. Folks CALL me Shirley. Shirley is a character on a TV show. She is not me & I am not her.”

As other people on Twitter have been pointing out, both the characters of Tiffany and Molly have been referenced as AKA alumni since the early seasons of “Insecure.”

New episodes of “Insecure” will air Sunday nights on HBO. 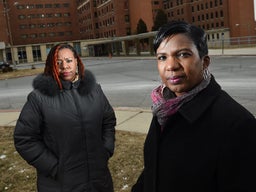