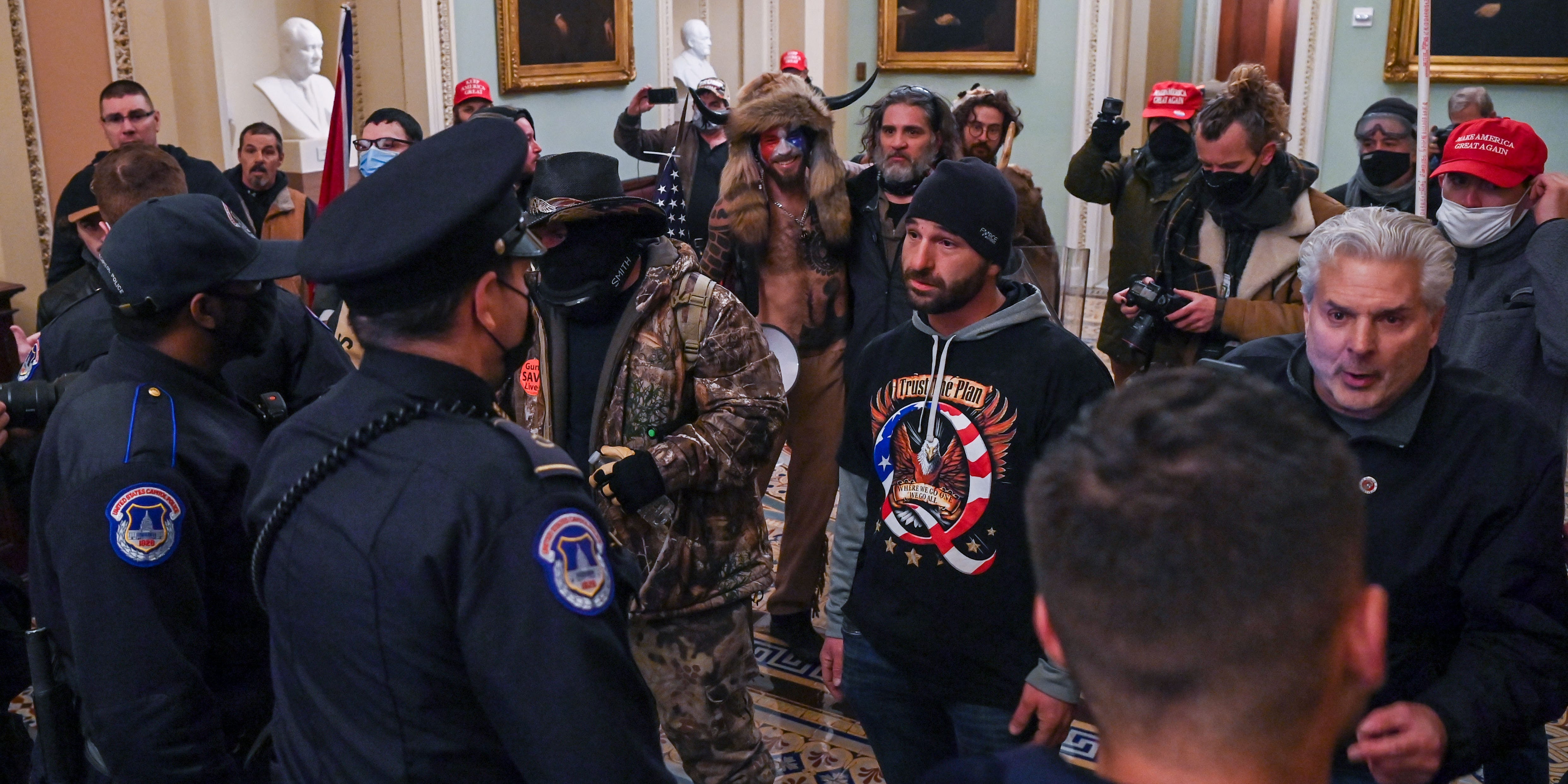 SAUL LOEB/AFP via Getty ImagesUS Capitol police officers try to stop supporters of US President Donald Trump to enter the Capitol on January 6, 2021, in Washington, DC. – Demonstrators breached security and entered the Capitol as Congress debated the a 2020 presidential election Electoral Vote Certification.

As Congress debated to confirm President-elect Joe Biden’s Electoral College votes, injured police officers were seen being evacuated on Capitol Hill during attempts to quell large-scale riots outside of the Capitol Building in Washington, DC.

An injured Capitol Police officer was just escorted by me.

Shortly after this video, several other officers with visible injuries to their faces walked by me.

“You want to get the hell out of here, they’ve taken over the Capitol,” one officer said. pic.twitter.com/LqteWpef3g

On Wednesday morning, thousands of protestors congregated on Capitol Hill as Congress planned to officially certify the results of the November presidential election.

President Donald Trump headlined a “stop the steal” rally while spouting unfounded claims of widespread voter fraud and baselessly accusing Democrats of working with election vendors to rig the presidential race against Trump.

There is no evidence to support the president’s claims and all 50 states have officially certified their election results as of December.

The protests grew violent following the president’s speech as rioters fought against police while attempting to breach the Capitol building, ultimately succeeding and gaining entrance. Multiple police offers were seen being evacuated outside of the Capitol Building with injuries stemming from the protests.According to CNN, at least one officer has been transported to the hospital.

Trump’s daughter, Ivanka, in a since-deleted message, retweeted the president’s message, saying, “American Patriots – any security breach or disrespect to our law enforcement is unacceptable. The violence must stop immediately. Please be peaceful.”

When asked if she was calling the rioters “patriots,” she clarified her point in a tweet and said, “Peaceful protest is patriotic. Violence is unacceptable and must be condemned in the strongest terms.”

The Capitol Building went into lockdown as both the House of Representatives and Senate were in their chambers discussing the validity of Arizona’s vote in the election. Congress was later sent into recess before being evacuated after protestors gained entrance into the Capitol Building.

They’re in the chamber. One is up on the dais yelling “Trump won that election!” This is insane pic.twitter.com/p6CXhBDSFT

As Senators were escorted out of their chambers, they were seen wearing protective gas masks, and congressional reporters inside of the Capitol Building have reported gunshot-like sounds within the building.

The exact number of injured police officers from the riots is unknown. The US Capitol Police did not immediately respond to a request for comment.