The 2014 Geneva Motor Show is in full swing, and Infiniti took the occasion to reveal the engine that pairs with the Q50 Eau Rouge concept car it unveiled at the Detroit Auto Show in January.

We’re very happy with the result: a twin-turbocharged 3.8-liter V6 that produces 568 horsepower and sounds lovely.

To make that transition, it needs more products, and one of those products needs to be on the level of cars like the BMW M3. With this engine, the Eau Rouge can be that product. If Infiniti’s numbers are correct, the Eau Rouge would be more powerful and faster than the 2014 Lexus IS-F, the C 63 AMG sedan, and the Jaguar XFR-S.

That’s great news: Another great car on the market is always a good thing, and the extra competition can push the established brands to improve.

Even with the engine, the Eau Rouge is technically a concept car, but we’re confident it will go into production. “We decided to further whet the appetite of performance sports saloon fans by engineering this powerful heart into our blood-red beast,” Infiniti President Johan de Nysschen said in a press release.

We’d be shocked if Infiniti decided to tease us, then not deliver. 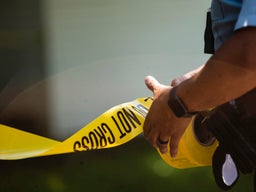