Koo, the 'free expression' social media app, is the Indian government's latest weapon in its standoff with Twitter 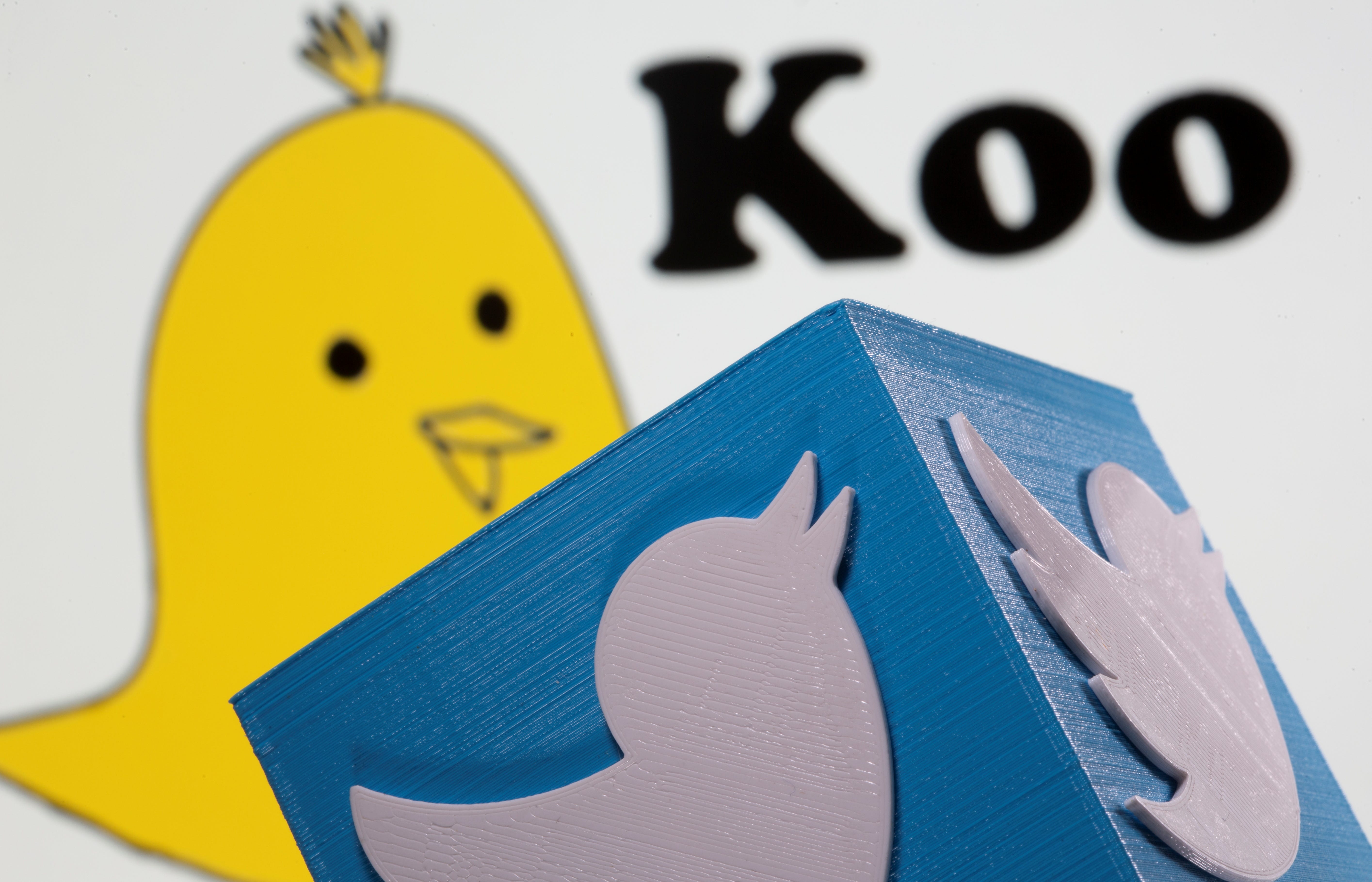 India’s farmers’ protests put Twitter in a censorship standoff with the Indian Government, which reacted by backing “Koo”, the app mimics tweets and says it has no plans to moderate its content.

Koo is just 10 months old. But Twitter’s refusal to block accounts supporting the protests outside Delhi – where tens of thousands farmers have come to global attention in their bitter, at times violent, demonstrations against new agriculture laws – has been its making.

Prime Minister Narendra Modi’s ministers were among those encouraging people in the world’s second-fastest growing internet economy to switch to Koo. It crossed more than 4.1 million downloads in two weeks in February and has secured $US4.1 ($5) million in funding.

Celebrities, politicians, and right-wing publications are now “Kooing”. Even the yellow bird logo and the name – Koo is a bird’s sound in Hindi – emphasize its desire to challenge Twitter. Some even cheekily used Tweets to announce their new Koo profiles.

“I am now on Koo,” says the pinned tweet of Piyush Goyal, India’s minister of railways, commerce, and industry who has more than 9.5 million followers on Twitter. “Connect with me on this Indian micro-blogging platform for real-time, exciting, and exclusive updates.”

According to mobile analytics firm Sensor Tower, Koo’s downloads soared by 159.9% on February 9, the day Goyal endorsed it.

This was on top of a 186.8% jump in downloads the previous day, triggered when Twitter published a defiant response to the government. 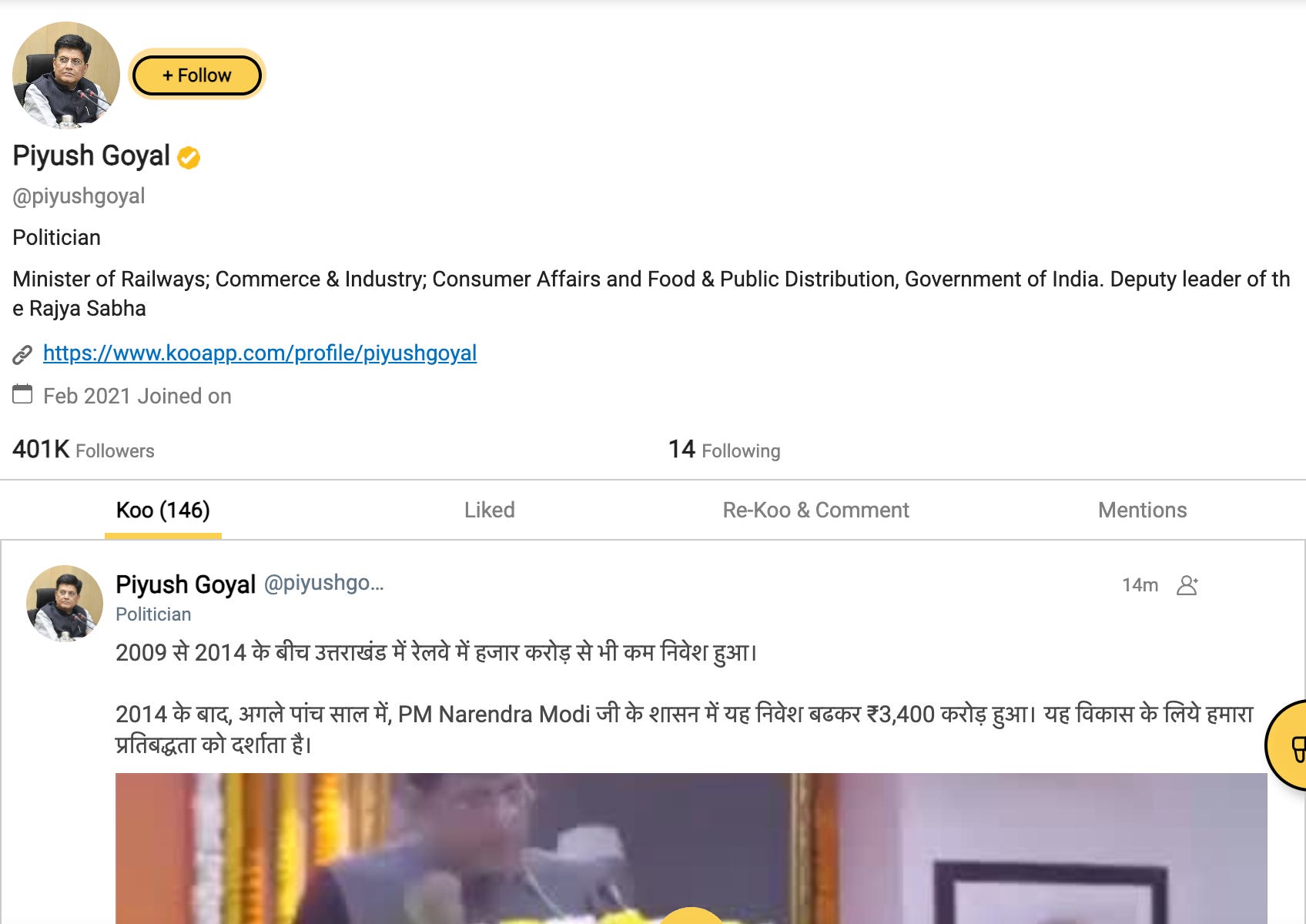 “We strongly believe that the open and free exchange of information has a positive global impact,” Twitter wrote, “and that the Tweets must continue to flow.”

The surge put Koo at the top of the app charts. Koo was founded in the southern city of Bangalore by Aprameya Radhakrishna, who sold his cab-hailing startup for $US200 ($258) million to Uber’s biggest rival in India, and Mayank Bidawatka, a serial entrepreneur.

At first glance, the similarities with Twitter are remarkable. Koo lets you follow people, read updates in a reverse-chronological feed, add and track hashtags, post a “Koo” in up to 350 characters, attach media, and respond to and like other people’s Koos.

But Koo has features, unavailable on Twitter, that are tailored to the Indian market. it is compatible with a handful of Indian languages and lets people filter out content by their chosen language, which helps in a country where only 10% of the population speaks English. 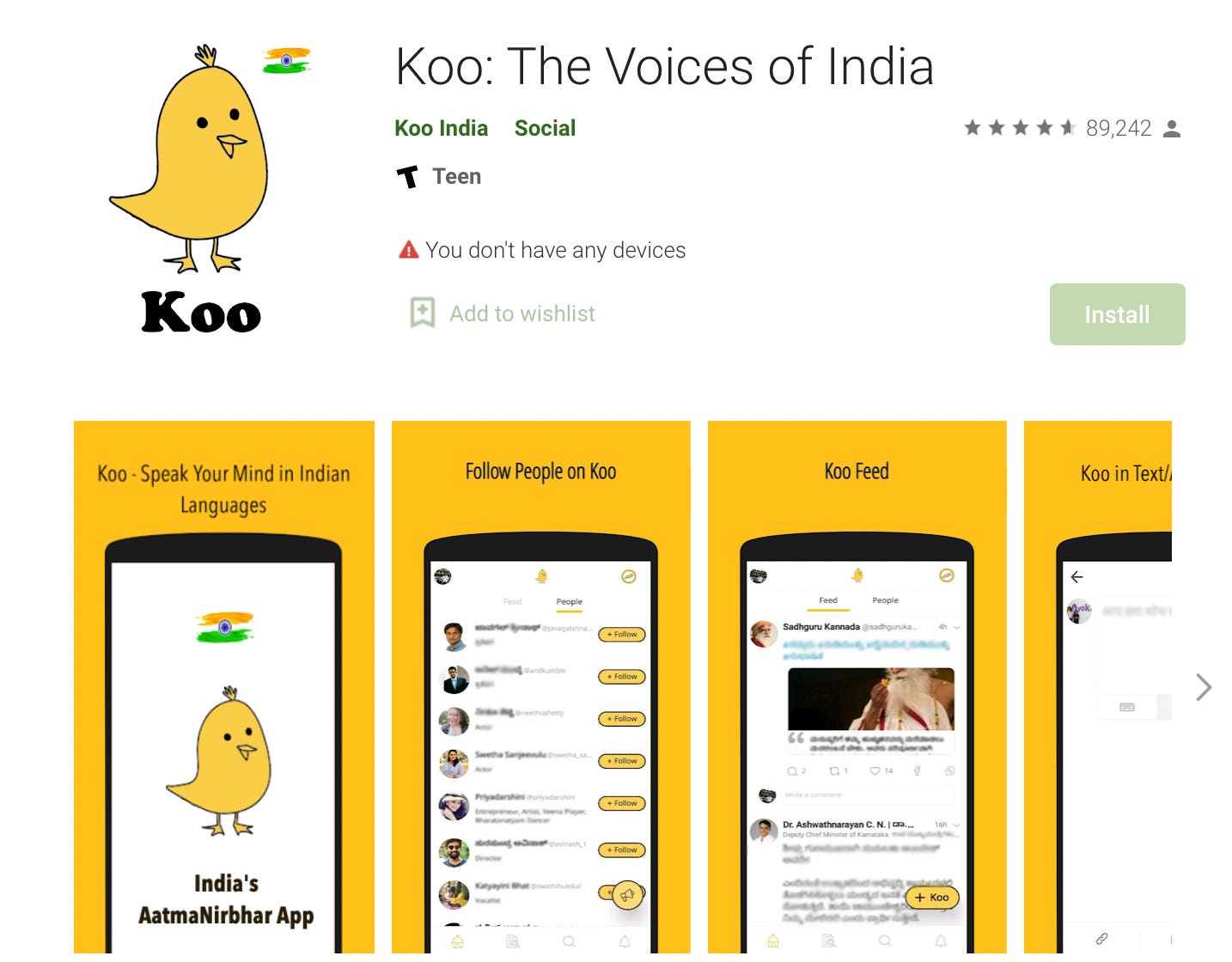 Google/KooKoo as it appears in the Google Play Store

It also has a dedicated button for forwarding “Koos” to WhatsApp, India’s most popular messaging app.

But arguably what truly sets this social network apart is its lack of content moderation. Its homepage invites people to “join India’s best minds that speak their mind”.

Its founders say they won’t govern their network the way the likes of Twitter and Facebook currently struggle to do. Instead, when Koo discovers any post that can be deemed unlawful, it will hand it over to the government for action.

“We don’t govern. Why should we govern? It’s a free-expression platform,” Radhakrishna recently said, “We’re not the ones to take action. There’s an elected government. Irrespective of who runs the government in the future … If it’s going to lead to violence, we’ll cooperate with the government.”

The Indian government meanwhile has pulled out all the stops to make Twitter fall in line, with Koo effectively becoming a weapon in the fight. Twitter has since agreed to comply partially with India’s banning order, suspending more than 500 accounts.

Challenging Twitter is no easy feat – it has 340 million users worldwide. In late November, another Twitter-esque app called Tooter got a lot of attention. Its brash “About” page likened Twitter’s dominance in India to the British Empire in the days before independence. But the absence of diverse voices meant its early adopters soon left. 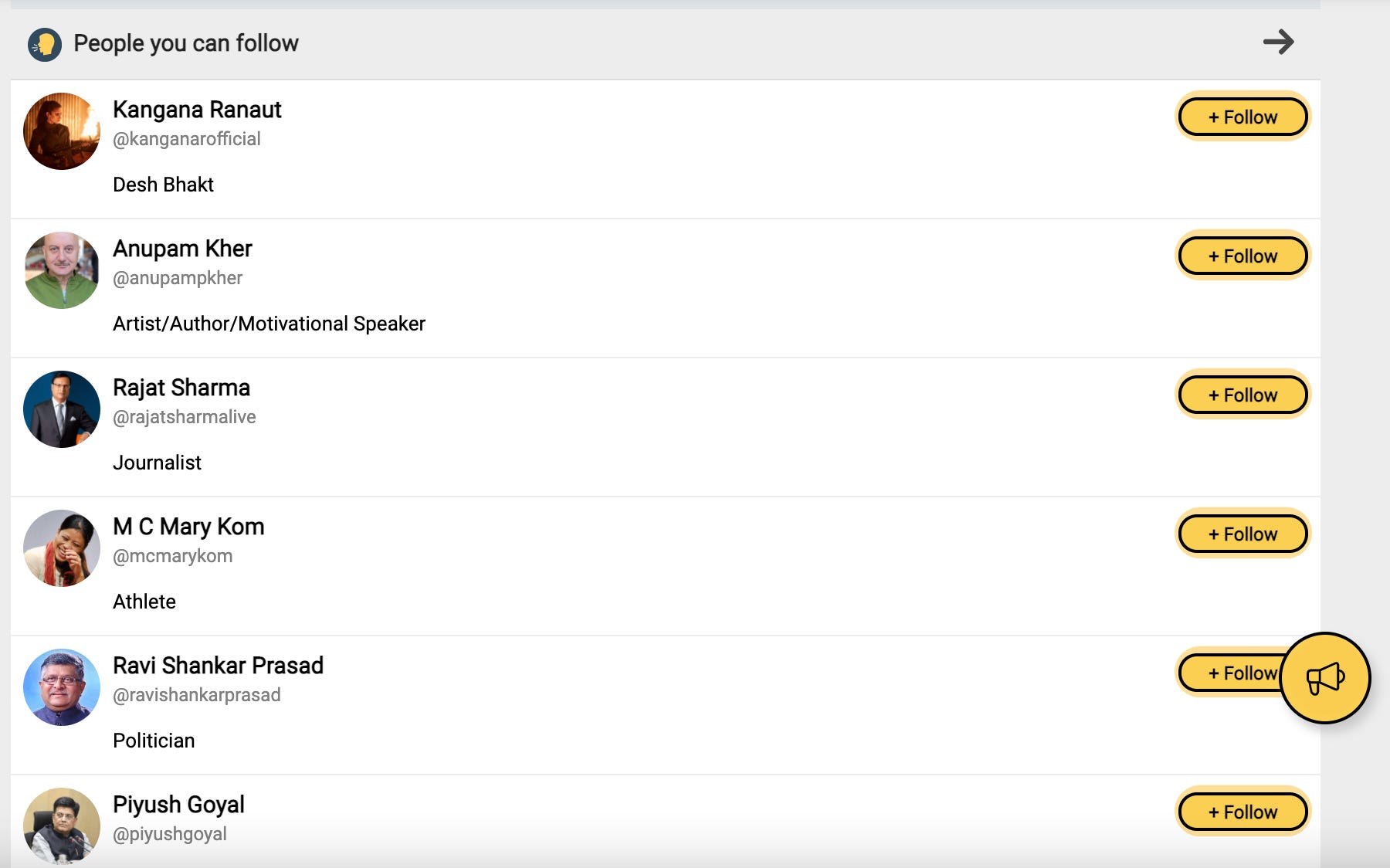 Modi’s government’s endorsement of Koo has made it particularly inviting to India’s right-wing and supporters of the governing party.

Nikhil Pahwa, a digital rights activist and founder of tech policy publication MediaNama, posted on Koo about the internet shutdowns authorities imposed to disrupt the protests and was soon flooded with “hateful comments and responses,” he told Insider.

Pahwa said he found Koo’s approach to moderating “extremely problematic.” “To allow any platform that just gives a wholesale licence to the government to censor our speech is not a platform worth being on,” he said.

This has led many to draw parallels between Koo and Parler, a US-based “free-speech social network” that grew after Twitter began censoring and eventually banned former President Donald Trump.

Radhakrishna has dismissed the comparison, telling tech blog Rest Of World that Parler was a “pro-Trump thing”, adding, “We are existing today irrespective of whether Twitter gets into trouble or not, irrespective of one ideology being there or not. We exist because we want to give a voice to every Indian.”

But while Parler has struggled, Koo might thrive under India’s current administration.

Modi has made the “Make in India” campaign his party’s centerpiece and has rolled out policies that promote domestic manufacturing and Indian startups.

The government is reportedly developing a range of homegrown apps aimed at eventually replacing Western services like WhatsApp, Zoom, and of course, Twitter.

China has already gone down this road with apps such as TikTok and WeChat. Will India follow?

“I know that the Indian government has China envy,” Pahwa said. “They want to exercise the kind of control that the Chinese government does over speech and over technology in its country.

“But I sure hope India doesn’t become like that.”

Koo did not respond to a request for comment from Insider.