Lt. Col. Vindman, a key impeachment witness, is retiring from the US military after being 'bullied' by Trump 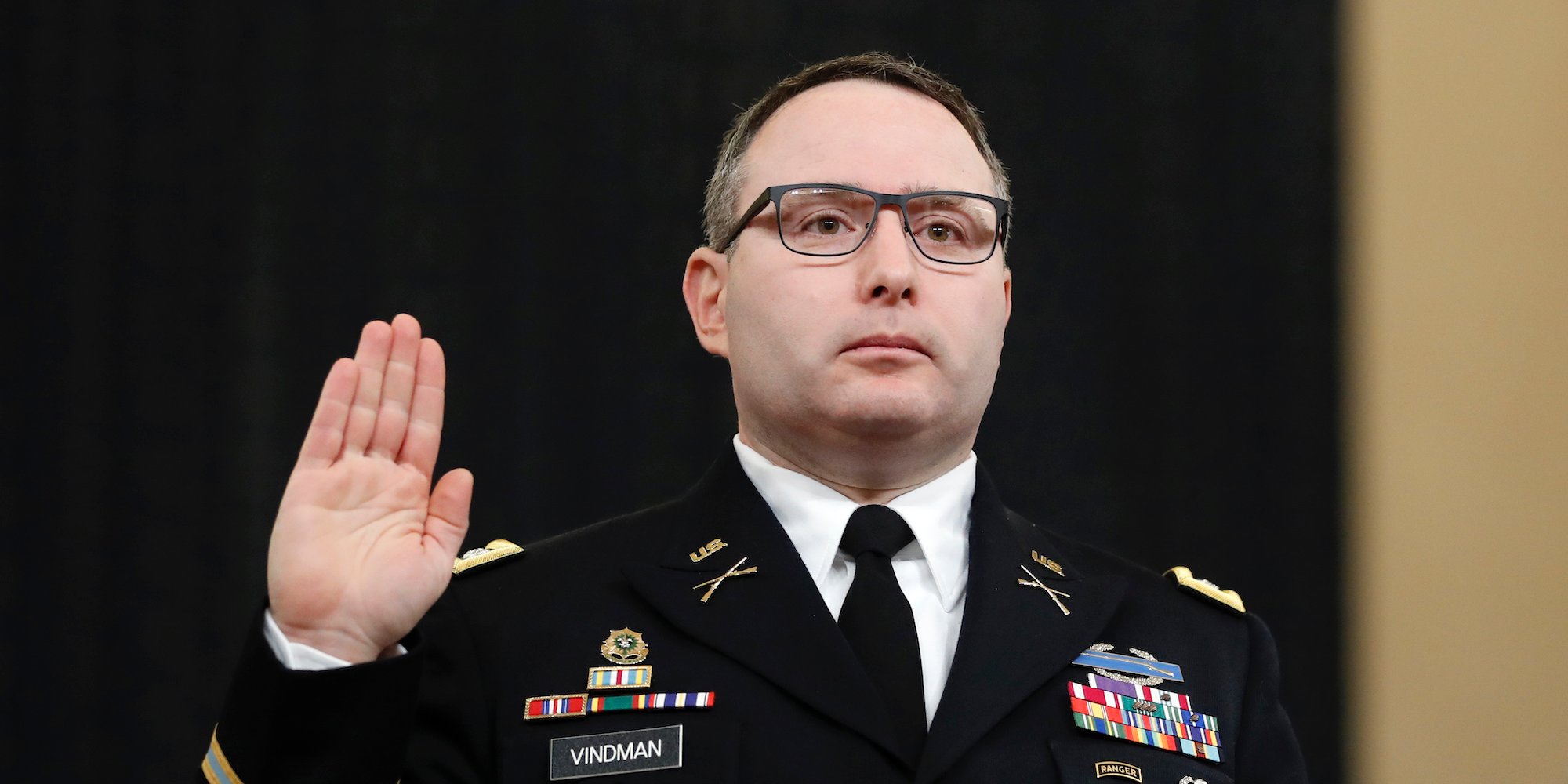 Lt. Col. Alexander Vindman, an important impeachment witness, is retiring from the military in response to a White House “campaign of bullying, intimidation, and retaliation” led by the president,CNN reported Wednesday, citing Vindman’s lawyer.

Today I officially requested retirement from the US Army, an organization I love. My family and I look forward to the next chapter of our lives. pic.twitter.com/h2D9MRUHY2

His attorney, Amb. David Pressman, told CNN that Vindman is retiring after 21 years of service because his career “will forever be limited.”

Despite assurances from Pentagon leaders that Vindman would not face retaliation for his testimony, some senior Army officials reportedly told Vindman that he would no longer be able to serve in his area of expertise, with some officials suggesting that he would need some sort of rehabilitative assignment, such as manning a radar station in Alaska. That would be a career-killing assignment for someone like Vindman, who specialises in matters related to Ukraine and Russia.

Furthermore, a number of US military officials and lawmakers have expressed concerns in recent weeks that the promotion to colonel for Vindman could be in jeopardy because of the president’s contempt for him.

A senior White House official told The Washington Post that they could not imagine that Trump would support Vindman’s promotion given his role in the president’s impeachment. It is highly unusual for a US president to weigh in on the potential promotion of a colonel.

Vindman, an Iraq War veteran and Purple Heart recipient who served on the National Security Council as a Ukraine expert, testified against Trump in House impeachment hearings, characterising some of his actions as improper.

Vindman, who was on President Donald Trump’s troubling July 2019 phone call with the Ukrainian president, told House lawmakers that it was “improper for the president of the United States to demand a foreign government investigate a US citizen and political opponent,” a reference to allegations Trump withheld aid to Ukraine to get the country to investigate former Vice President Joe Biden.

Trump was impeached by the House but acquitted by the Senate, and in the aftermath, the president swiftly fired Vindman before moving on to target other senior US government officials considered disloyal.

Some Democrats have tried to shield Vindman from further retaliation, with Sen. Tammy Duckworth, a Democrat from Illinois and a disabled combat veteran, moving to block the promotions of more than one thousand other senior military personnel until the secretary of defence offers written assurance that Vindman’s anticipated promotion would not be derailed.

“The President of the United States attempted to force LTC Vindman to choose: Between adhering to the law or pleasing a President. Between honouring his oath or protecting his career. Between protecting his promotion or the promotion of his fellow soldiers,” Vindman’s attorney told CNN.

“These are choices that no one in the United States should confront, especially one who has dedicated his life to serving it,” he added, stressing that Vindman “did what the law compelled him to do; and for that he was bullied by the President and his proxies.”

His attorney said that “Vindman’s patriotism has cost him his career.”