I got nowhere near the limits of the $46,000 MINI JCW GP — the fastest, most intense MINI ever made 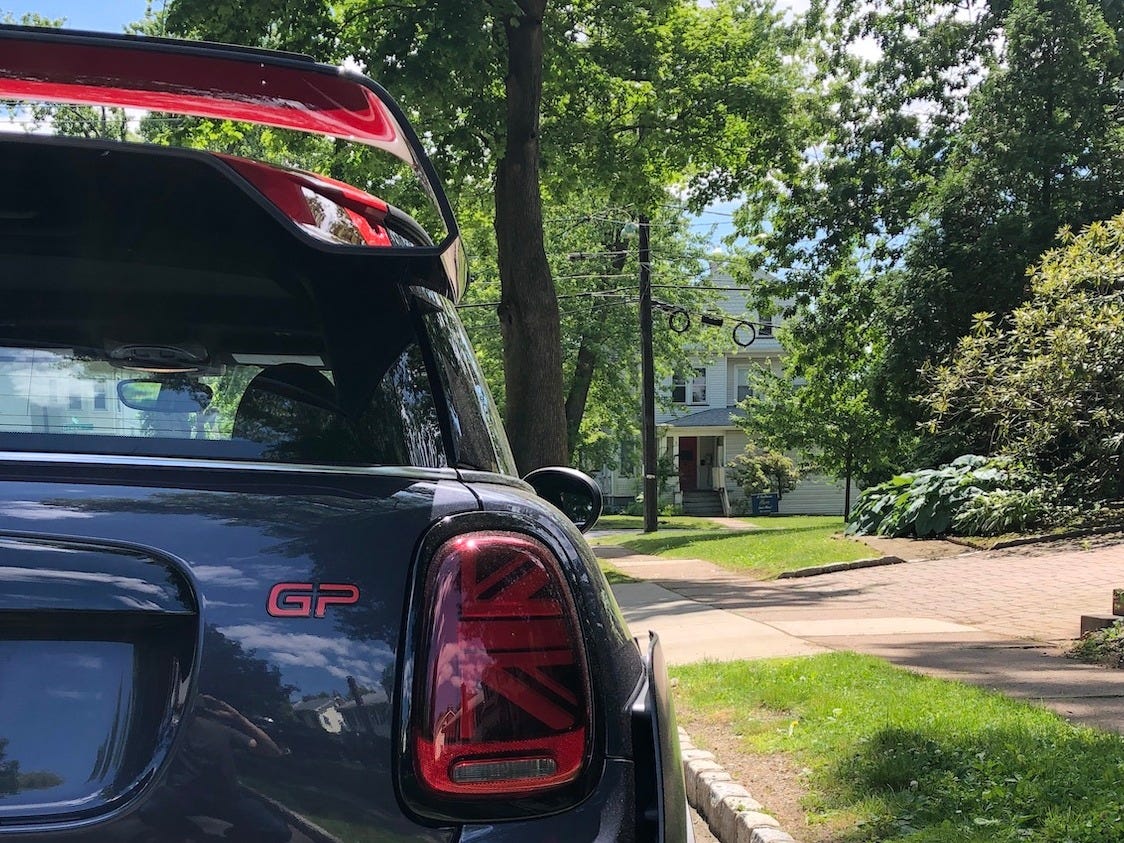 Matthew DeBord/InsiderThe MINI JCW GP has a lot of wing and even a few cheeky British design elements.

MINI has a long and illustrious competitive history, dating all the way back to the original marque’s heyday in the 1960s. The famous “Italian Job” getaway is nothing compared to what MINIs have done in actual racing. And since the revival of the brand under BMW ownership, the “John Cooper Works” moniker – taken from old-school race tuner John Cooper, who gave his name to the first MINI Cooper in 1961 – has signalled that a MINI could be taken to the track. And trusted to do its job as a legitimate high-performance machine.

One of my personal favourite cars of all time is the MINI JCW, which I tested years ago and am still scared of.

Last year, MINI brought out the JCW GP, the most intense and fastest vehicle it’s ever produced. The car was meant to hit the street – er, the race track – mid-way through 2020, but the coronavirus pandemic appears to have slowed things down. In the US, you’re still limited to pre-ordering a GP, for $US1,000.

Only 3,000 will be made, and the car is already advertising its bona fides. It lapped Germany’s legendary Nürburgring in under eight minutes, according to the MINI. That’s up there with some older Porsche 911s and Ferraris.

I was rather lucky to get a crack at the MINI JCW GP hardtop, 2021 edition. This MINI is limited to 3,000 units and is currently still at the taking-reservations level. If you want one, you’ll have to put down $US1,000. 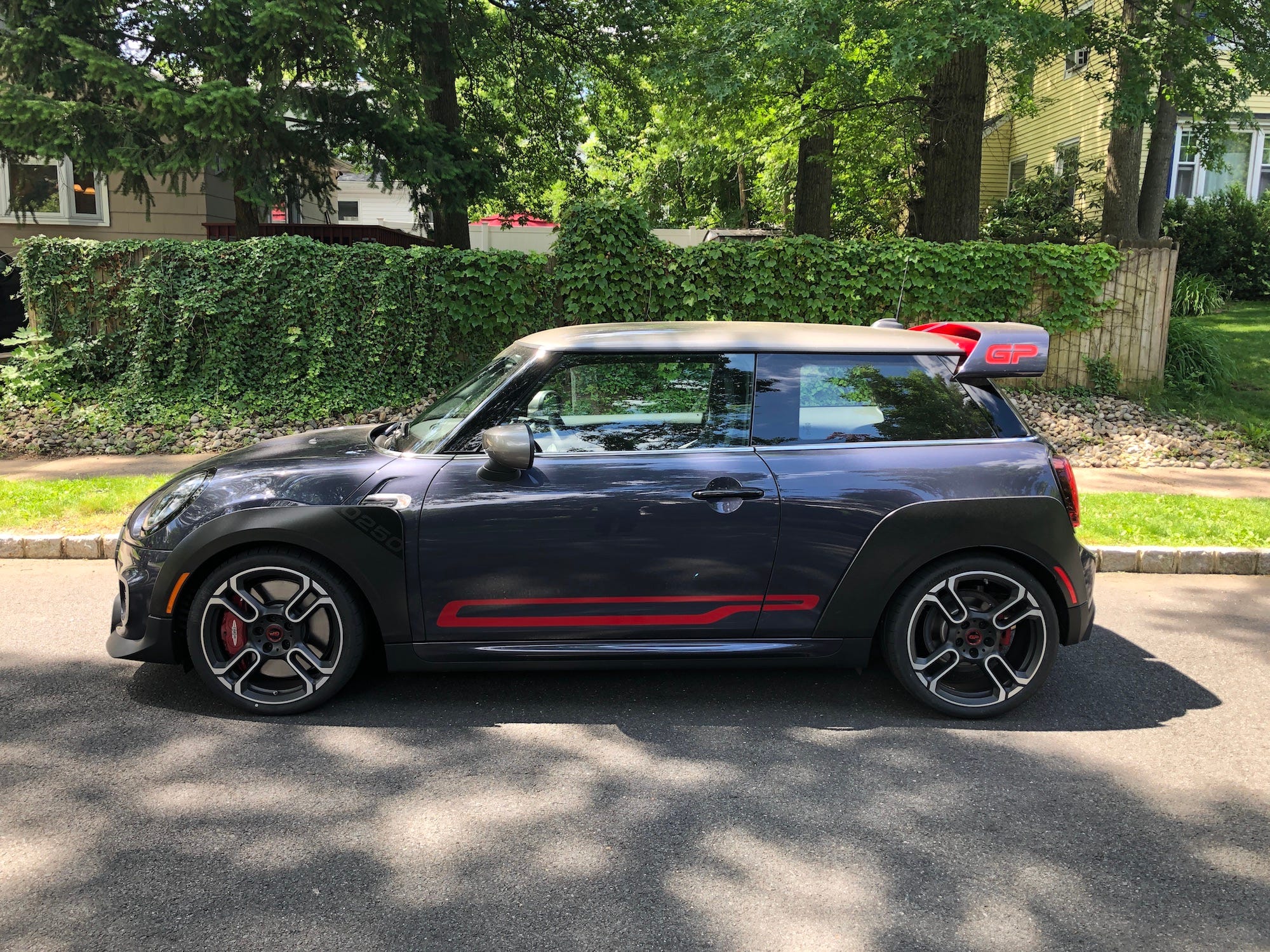 Yes, the styling is nuts, but the familiar MINI cues are ever-present, starting with the classic MINI headlights. They’re surrounded by model-specific black rings. 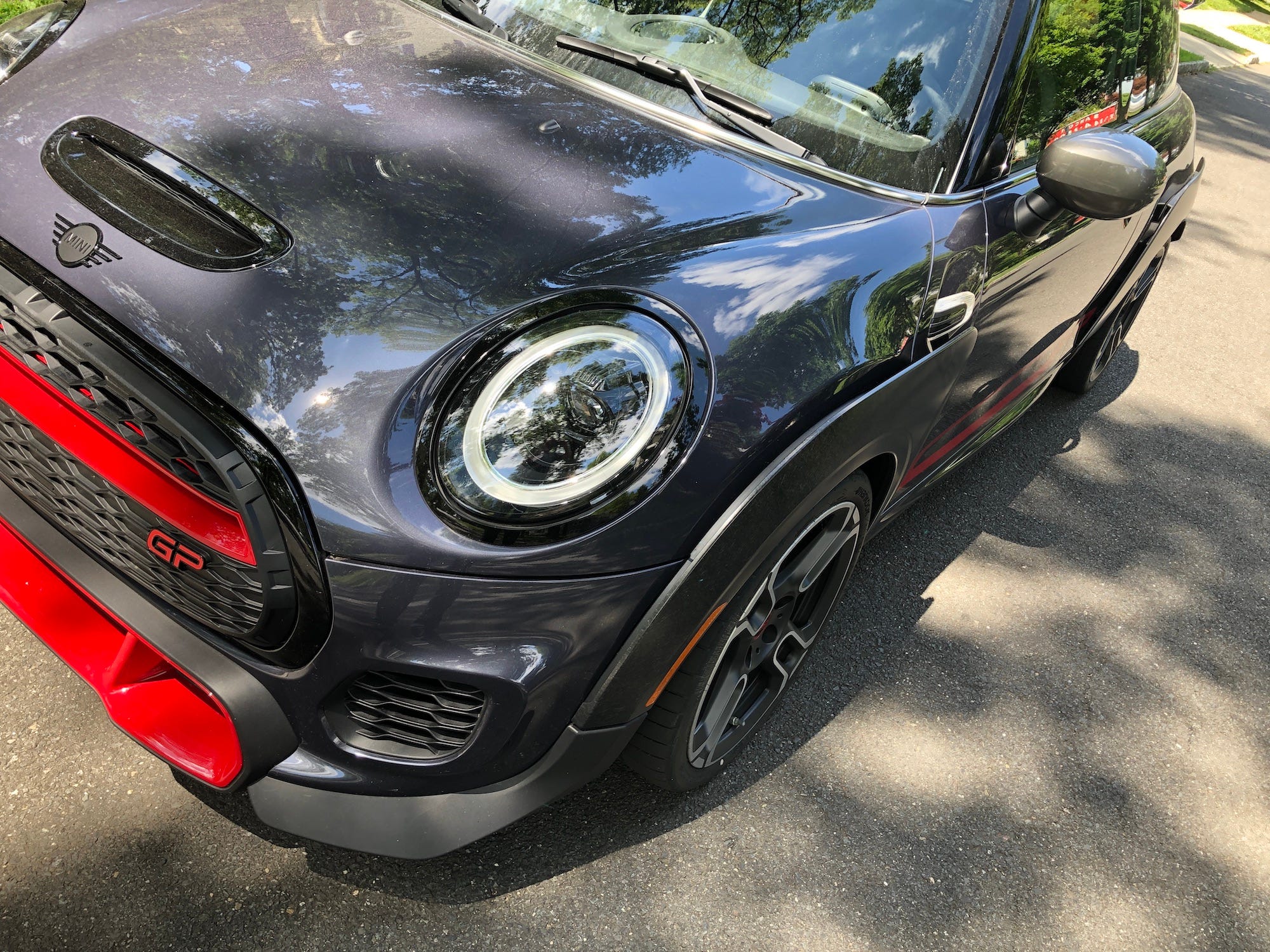 The intricate dual-wing dominates the JCW GP’s silhouette, overhanging the hatch. Yes, it looks bonkers. But it also provides useful downforce at speed. 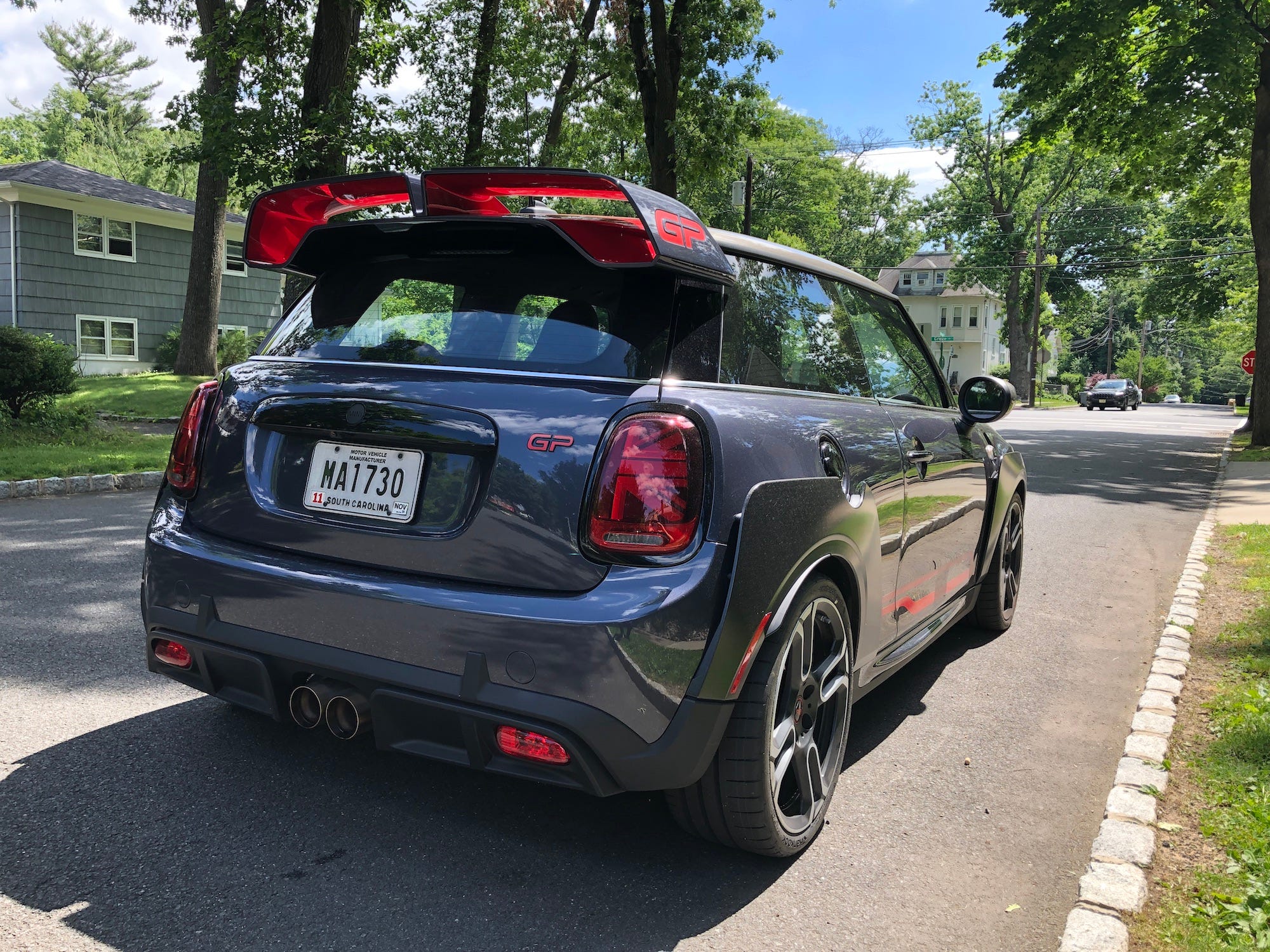 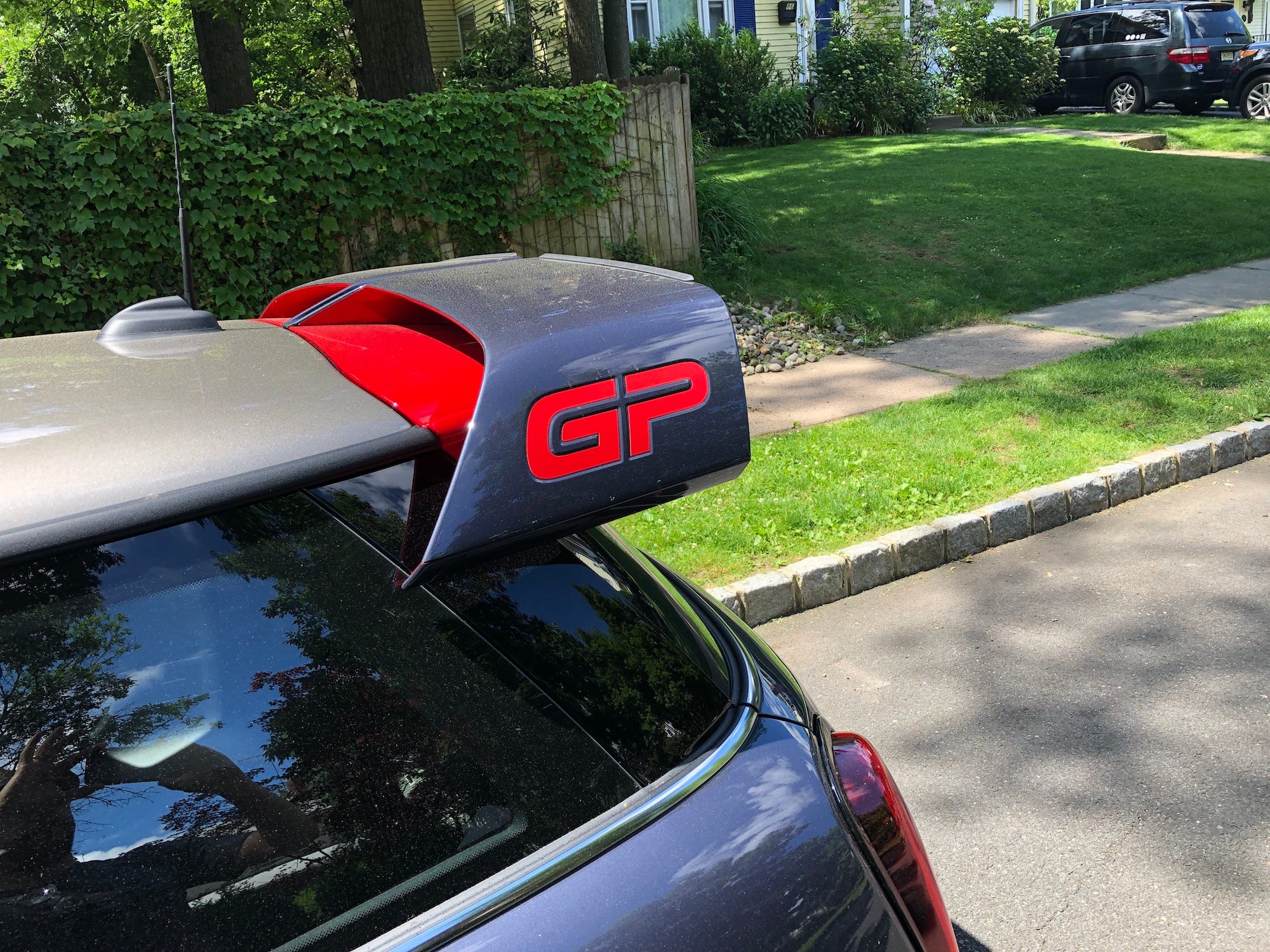 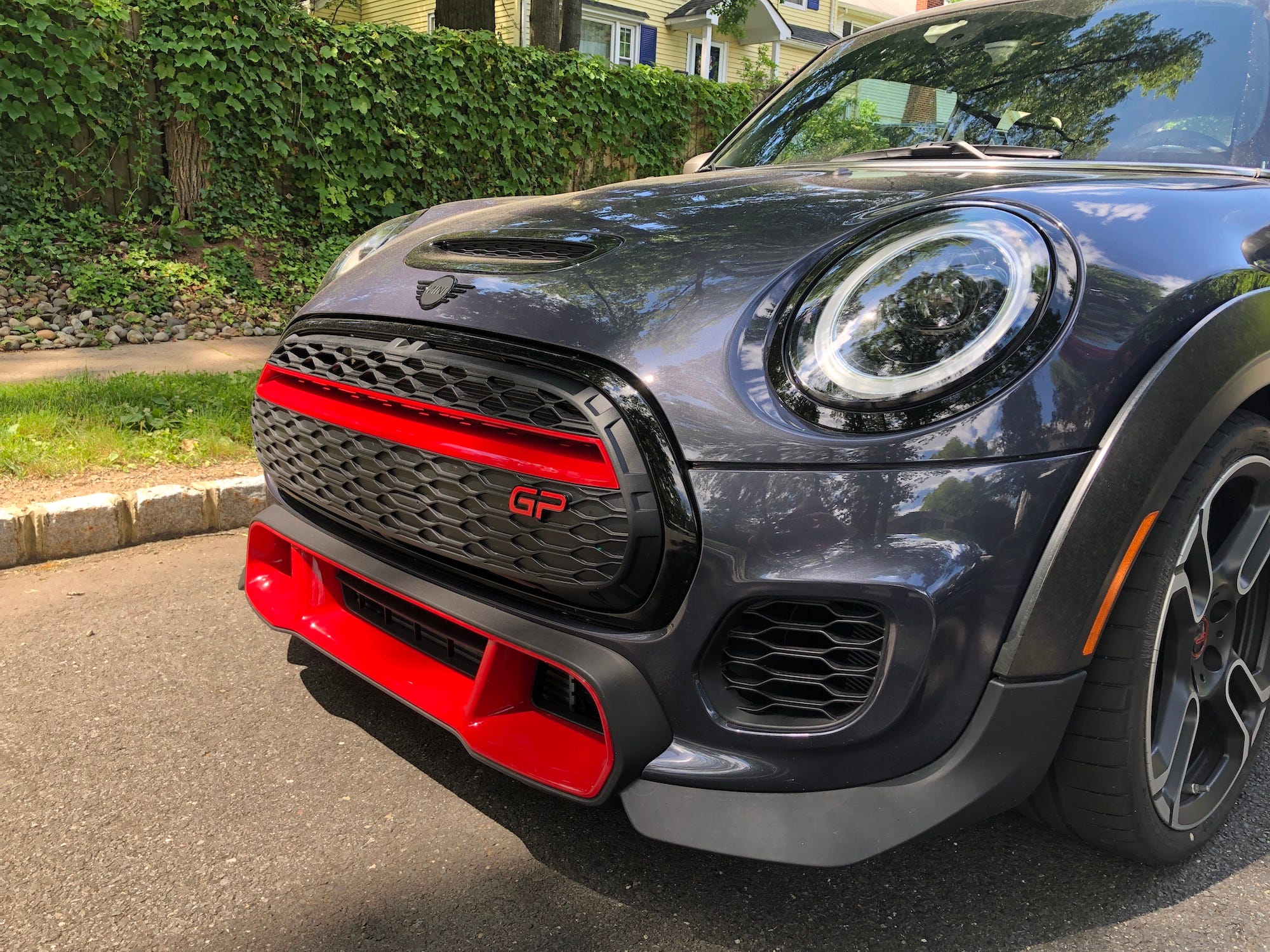 The dual exhaust pipes signal that this MINI means business. 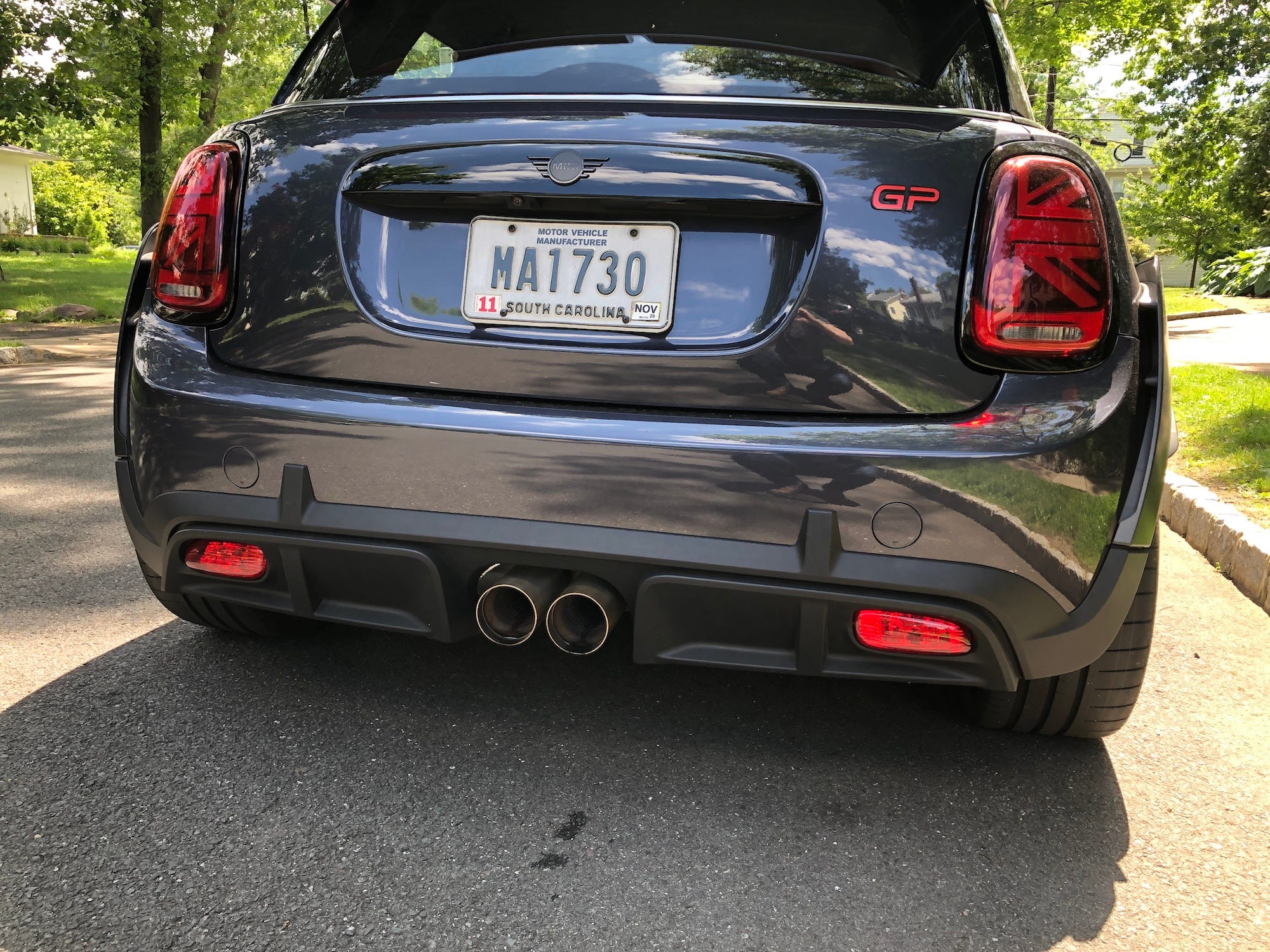 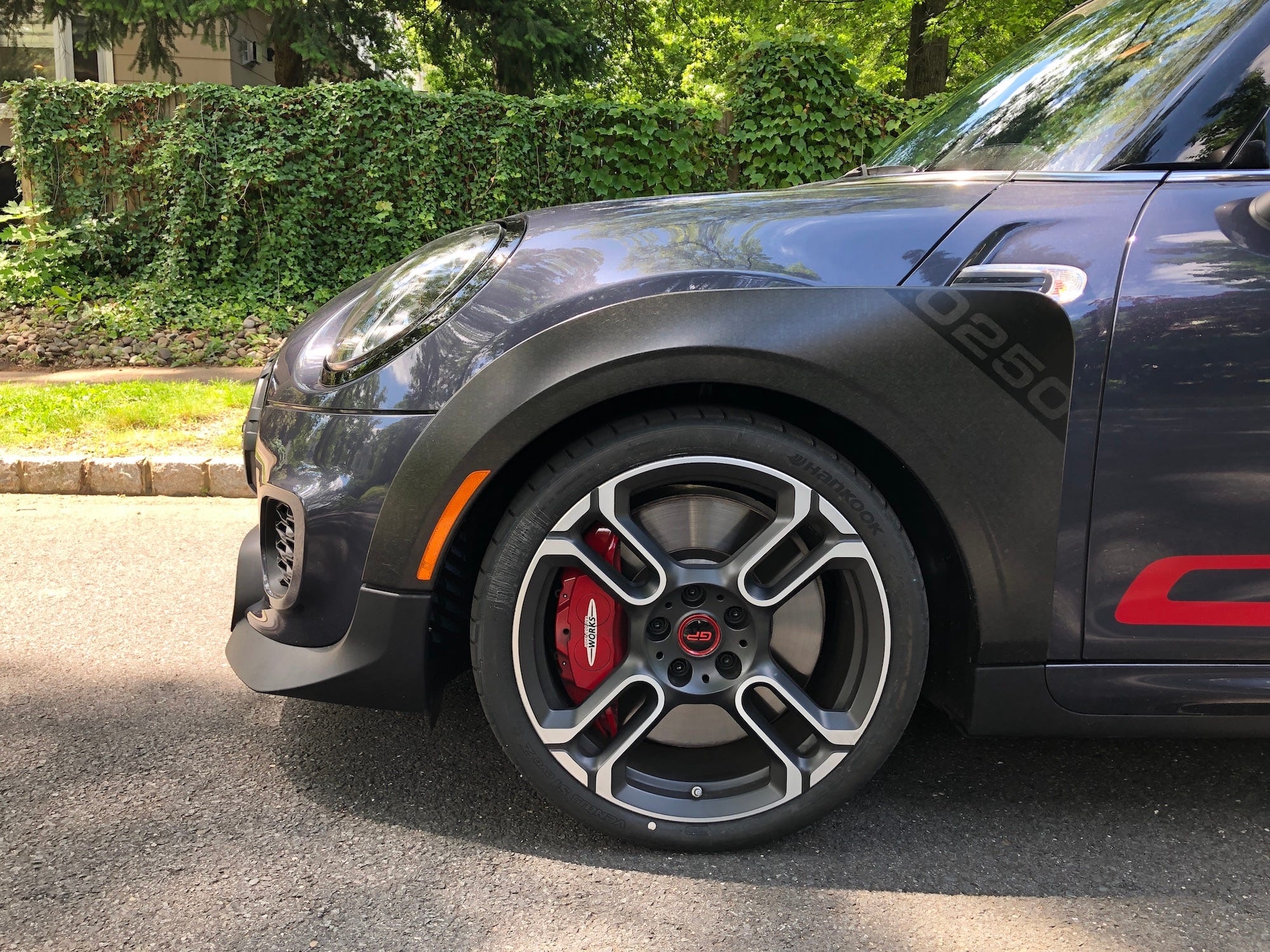 The rear brakes don’t get the same treatment, but my tester did have lightweight, 18-inch JCW wheels all the way around … 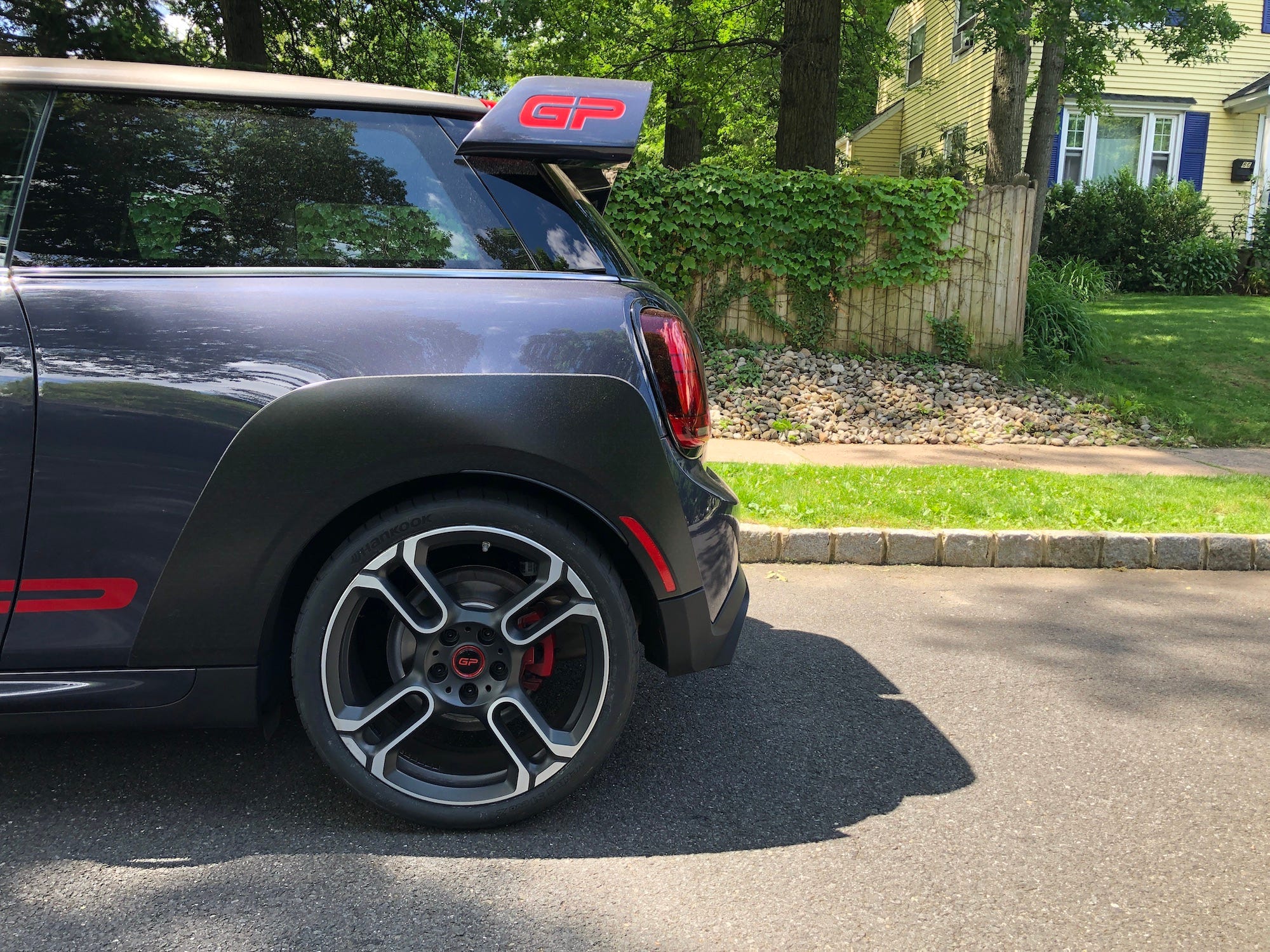 … Plus a quartet of Hankook high-performance tires. 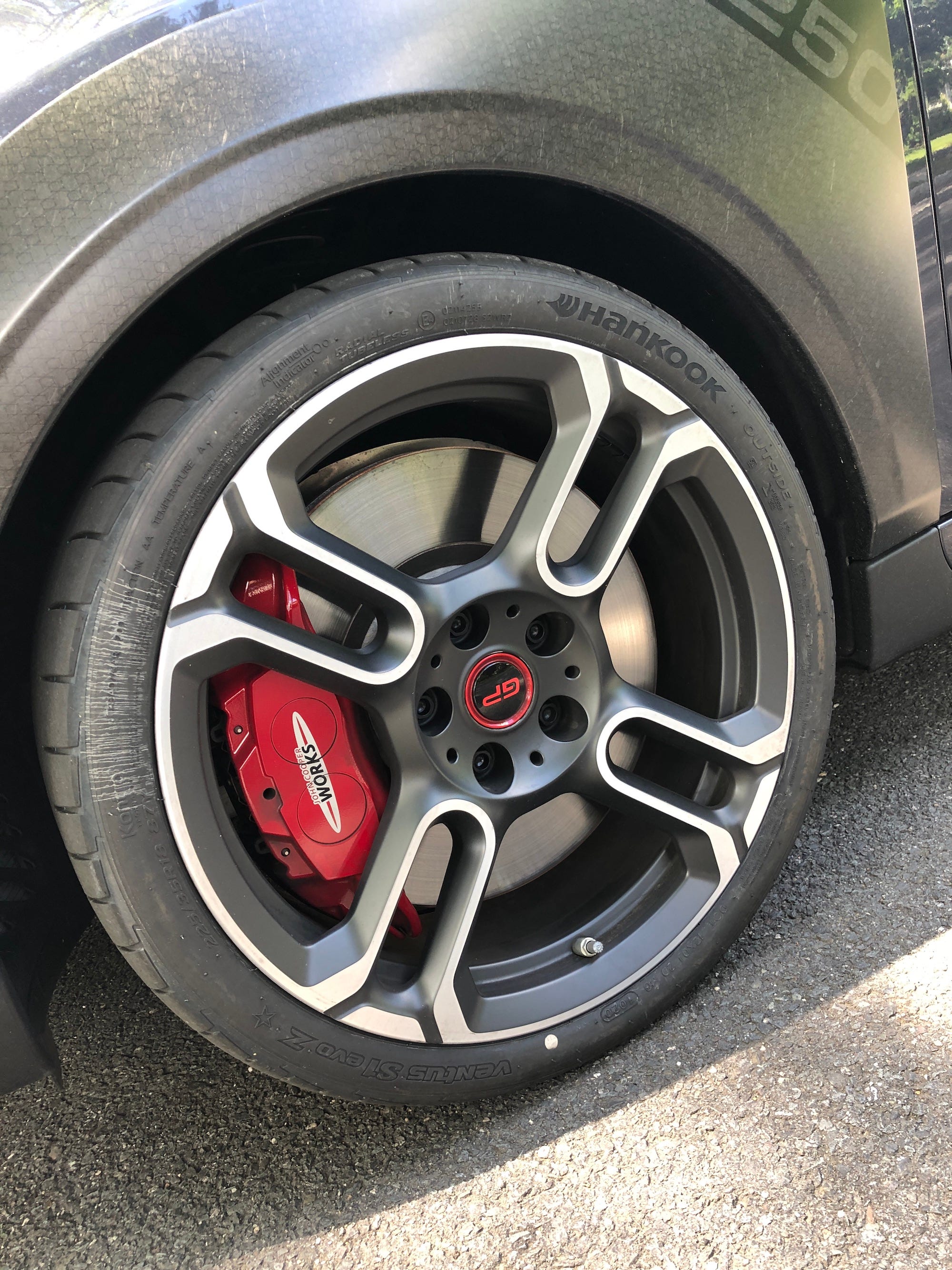 The powerplant for the JCW GP is a very special thing! 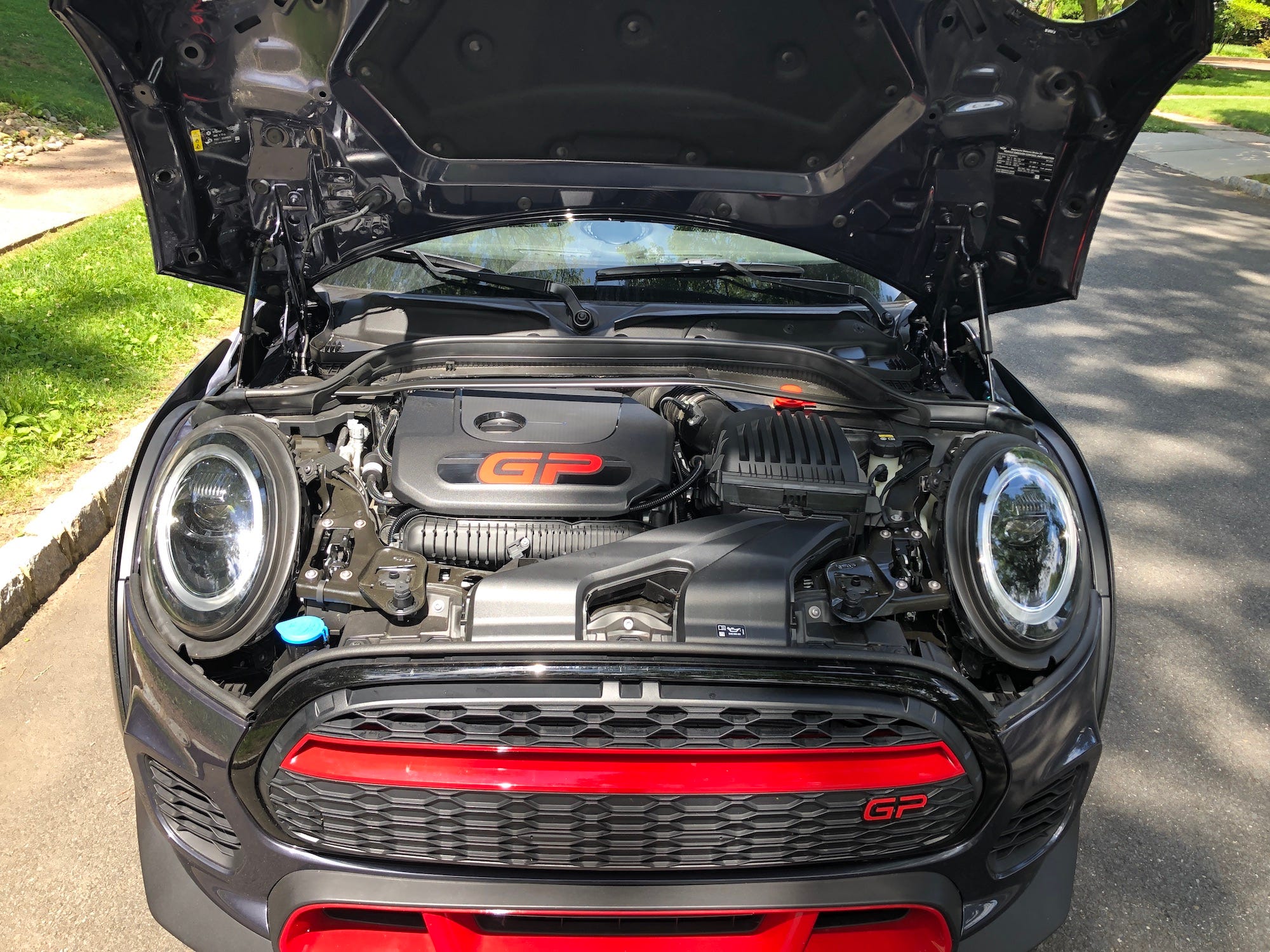 It’s a unique GP motor: a 2.0-litre turbocharged four-cylinder that cranks out 301 horsepower with 331 pound-feet of torque. 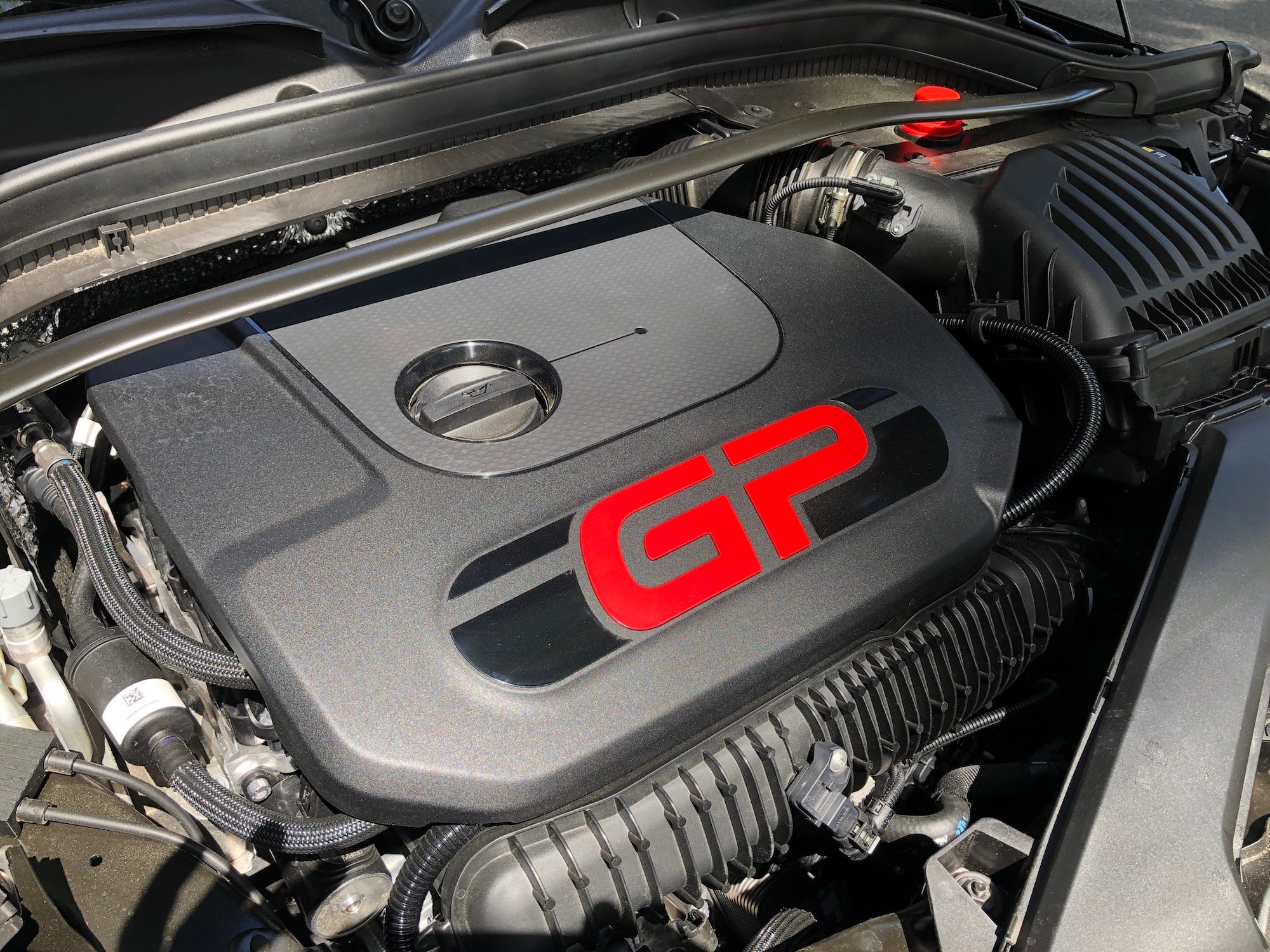 Controversially, unlike the MINI JCW, the GP lacks a manual transmission — because MINI doesn’t have a manual that can handle the engine’s power output. Thus, you get an eight-speed automatic coupled to a limited-slip differential. 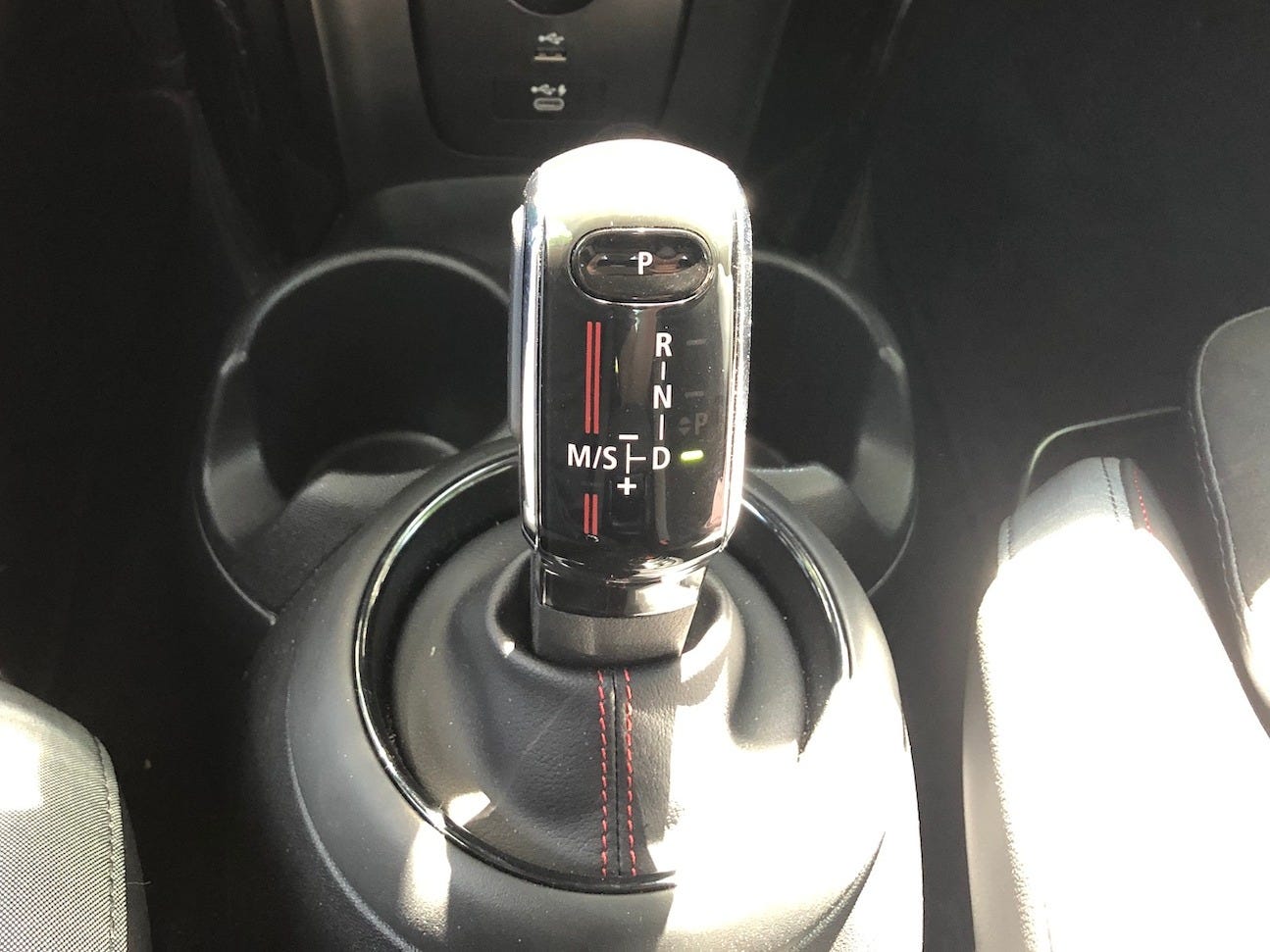 Fuel economy, for a car with this much pep, is sort of stunning: 24 mpg city/30 highway/26 combined.

A chilli-red bar spans the rear cargo area, which is quite commodious at 33 cubic feet. 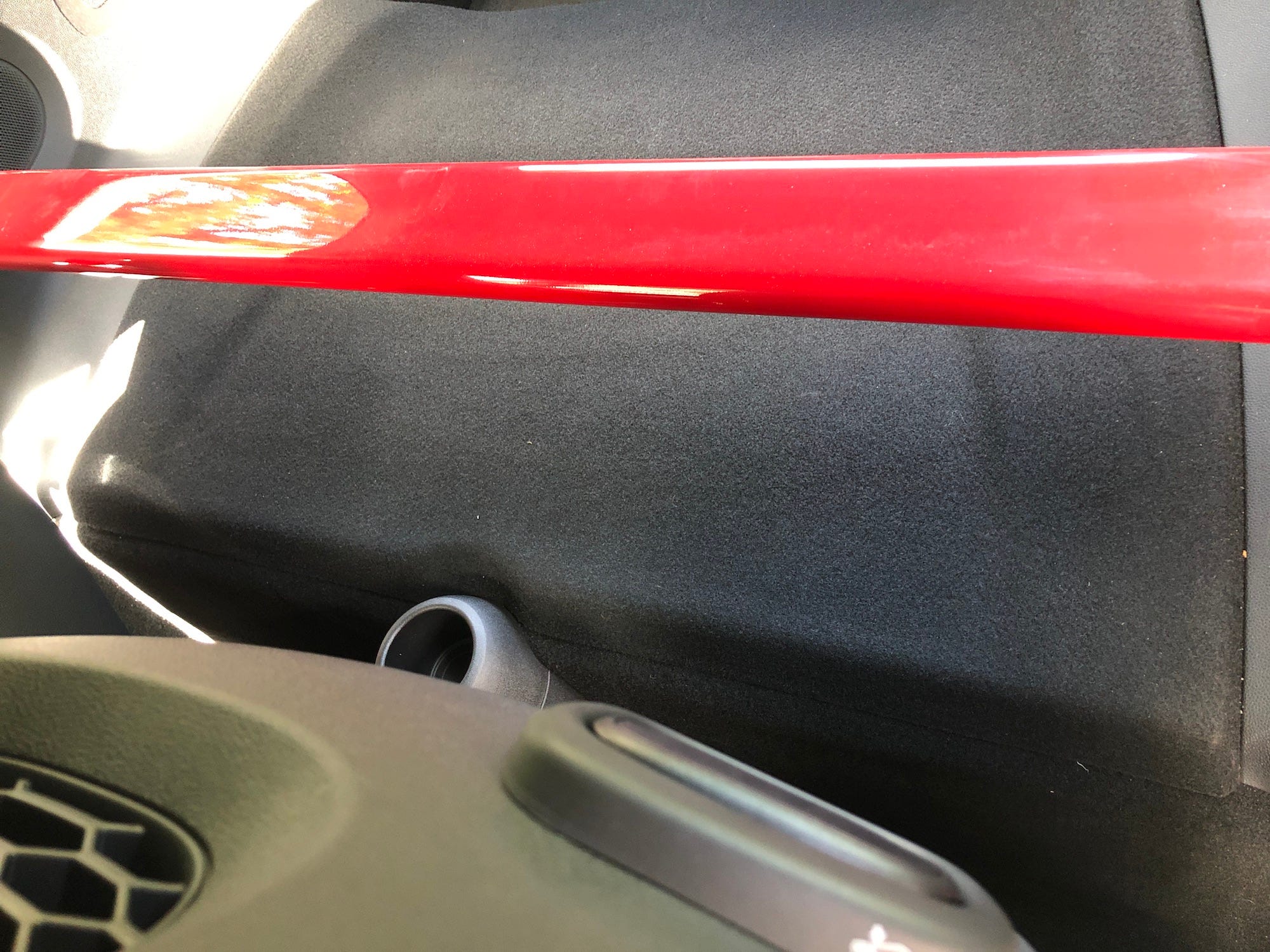 Let’s take a look at this hot hatch’s interior. Be forewarned: It’s cosy. 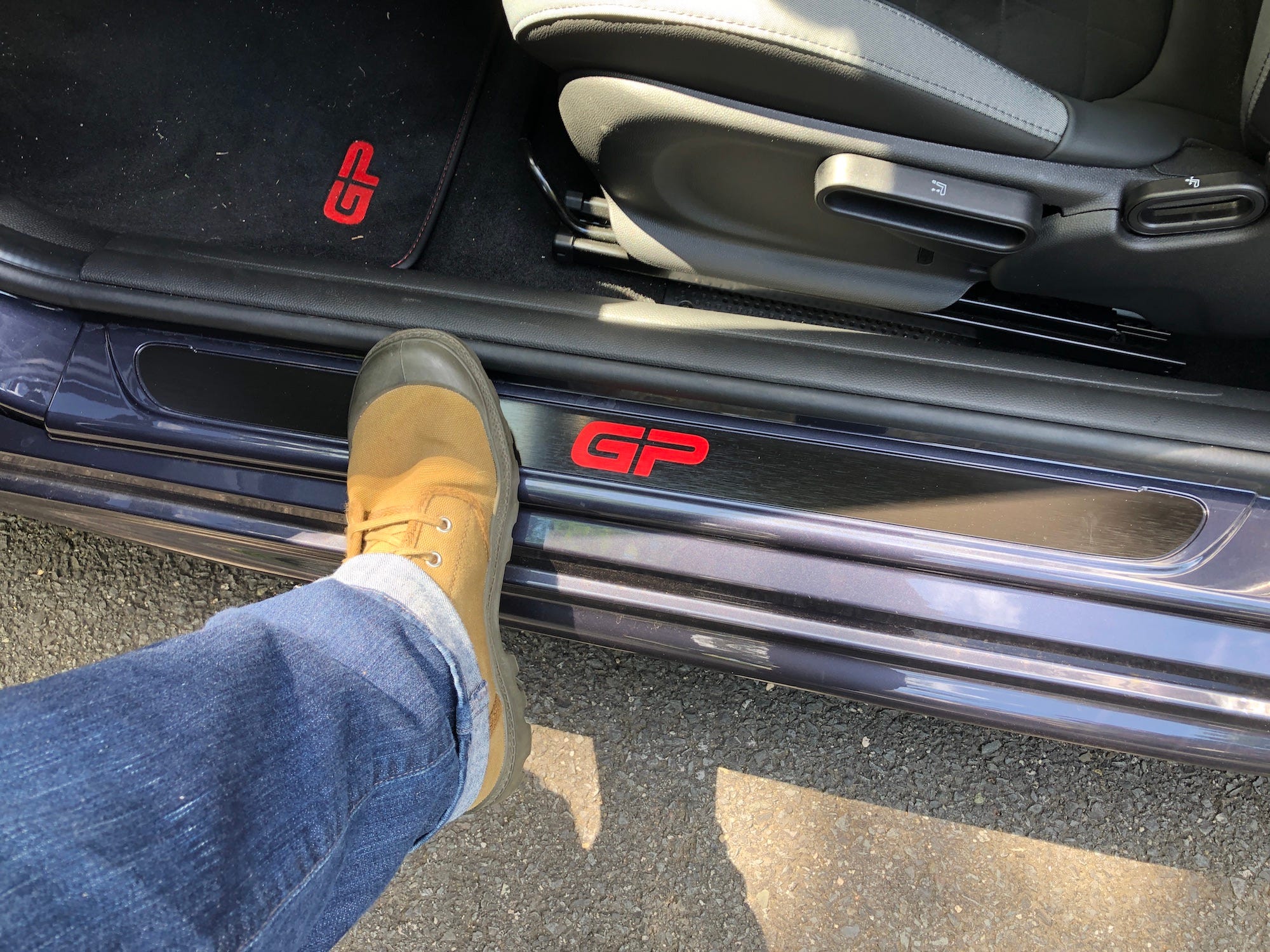 The GP is a two-seater, with just about anything that could add weight — such as rear seats — removed. 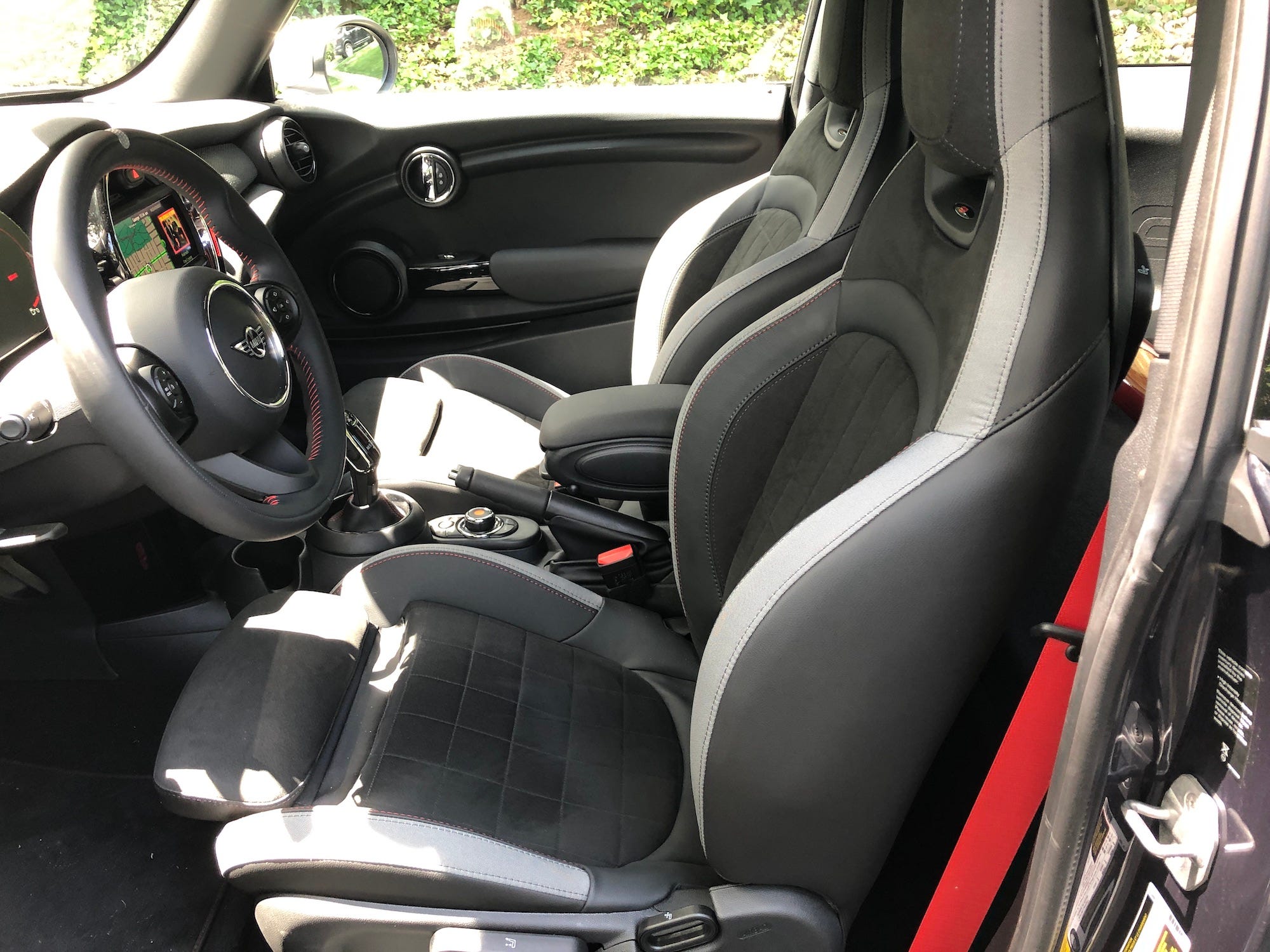 A small GP logo adorns each seat, right where a racing harness could be fitted. The interior was rendered in “Carbon Black Dinamica” and leather. 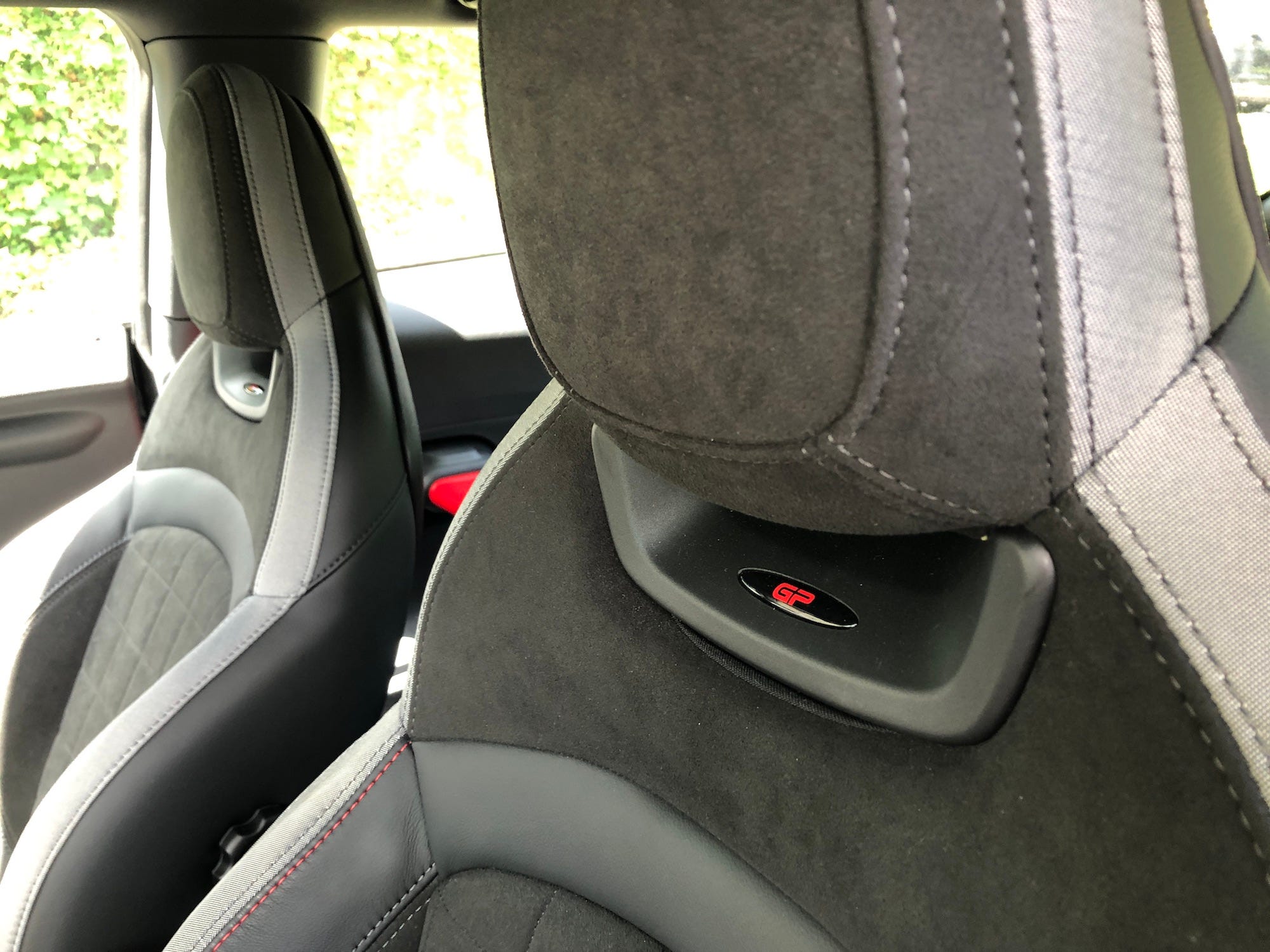 The multifunction steering wheel inspires confidence when you grab it. The small, all-digital cluster is a study in displaying only what you need to drive fast. 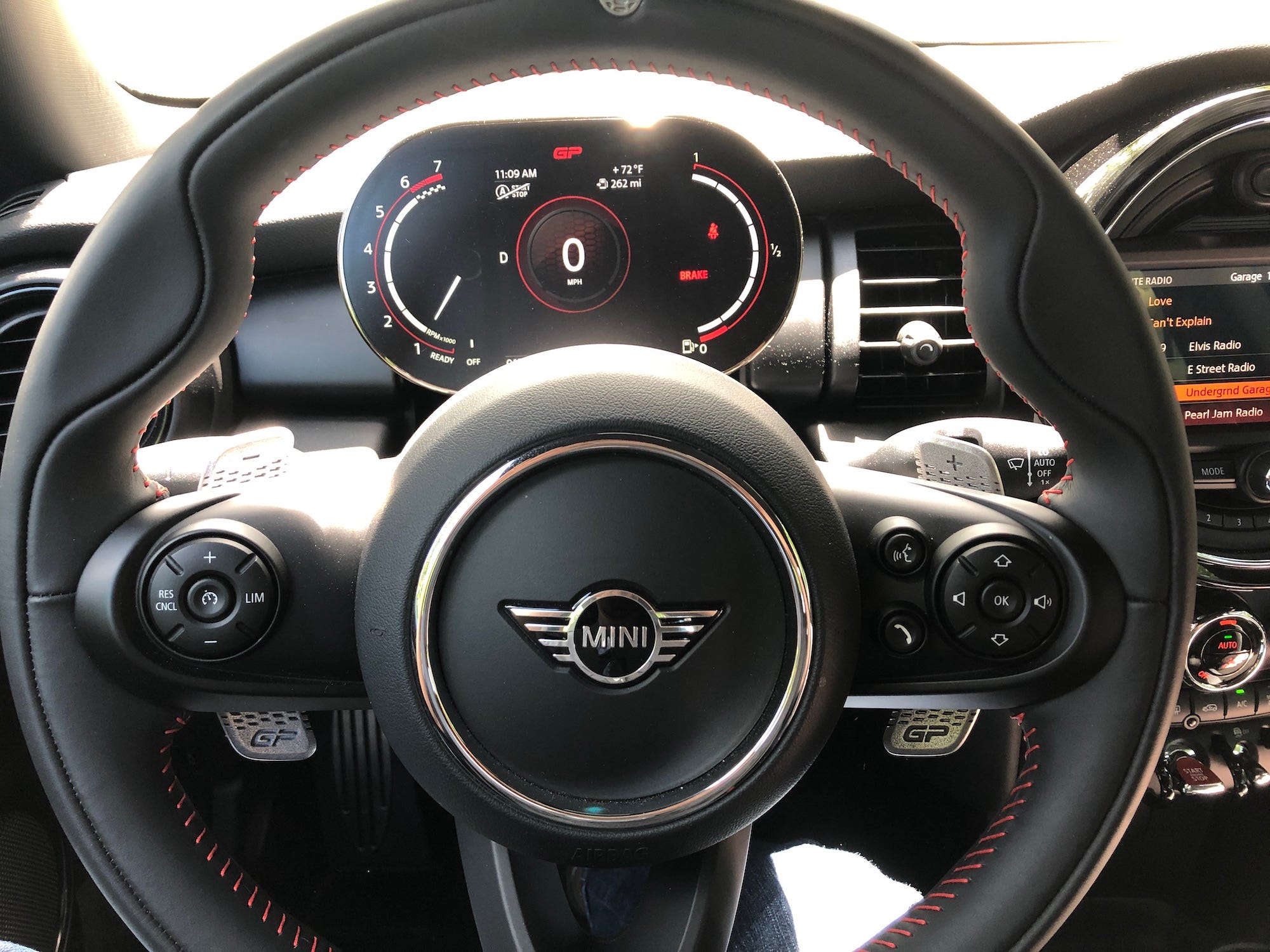 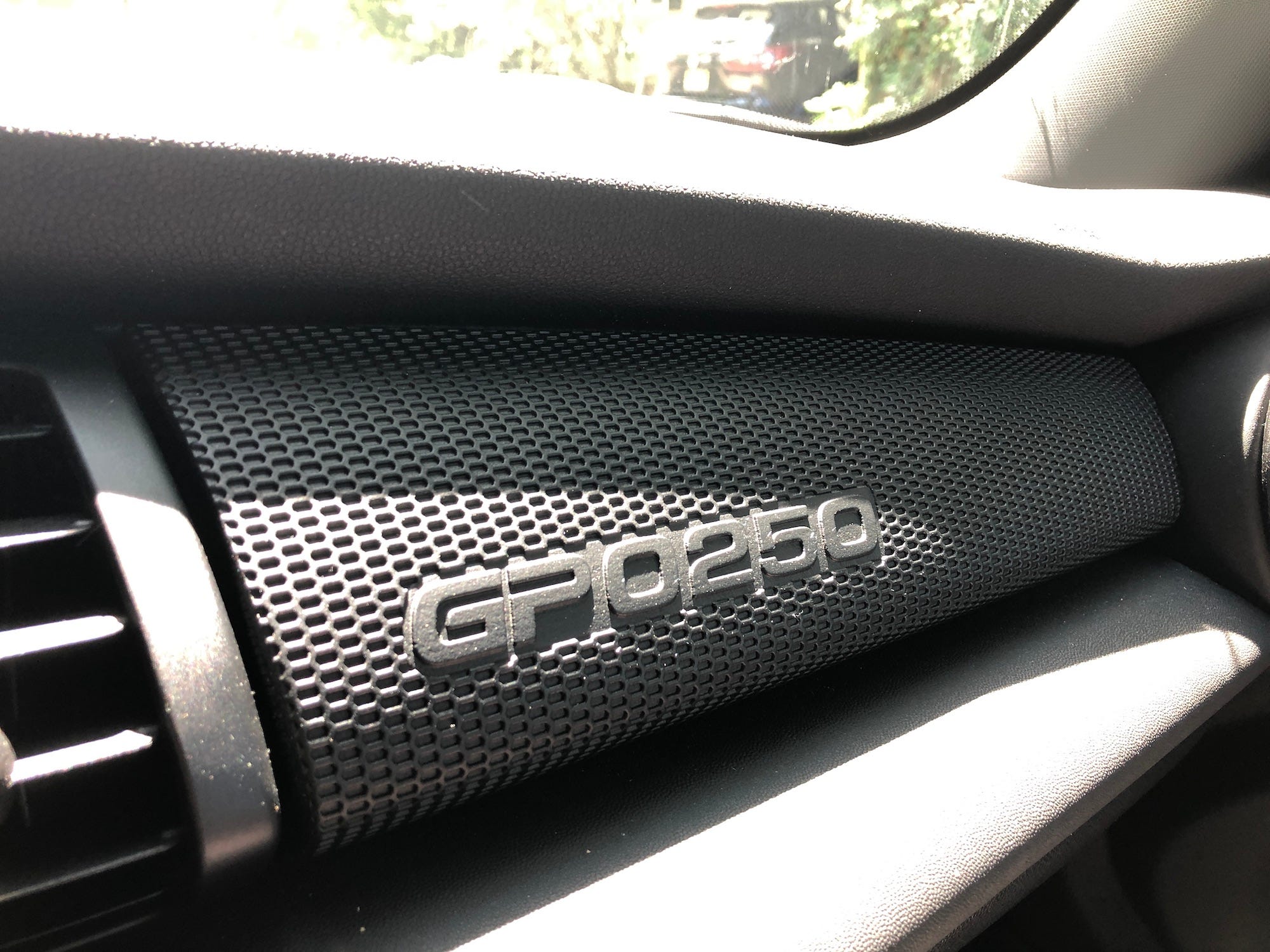 I adore MINIs for spirited driving, and the focused nature of the cabin really gets you in a track-day frame of mind. 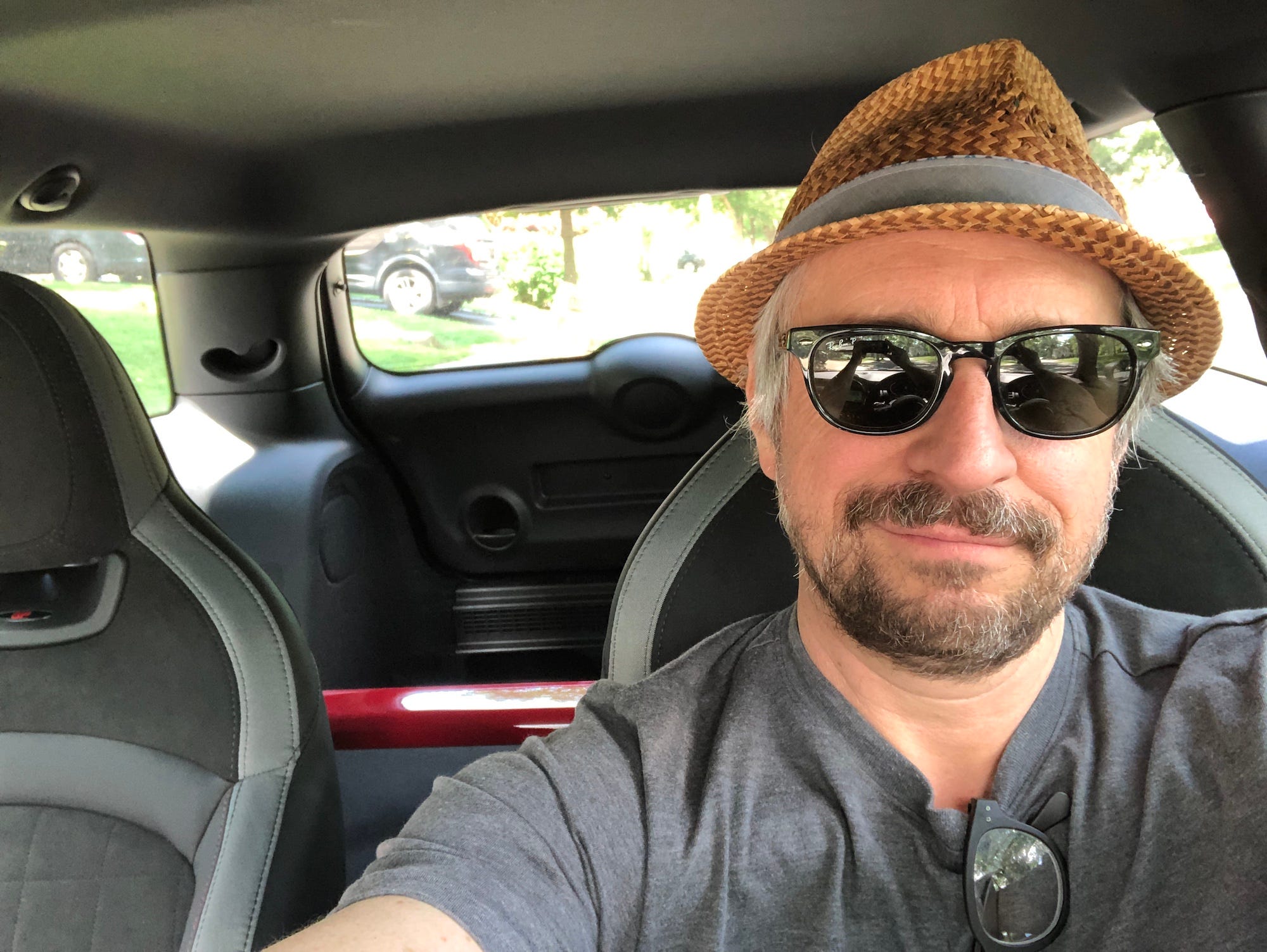 When the new MINI arrived back in 2000 — yes, two decades ago — a large speedometer occupied the centre stack, an homage to designer Alec Issigonis’ original from the 1960s. The space now awkwardly hosts BMW’s rectangular, 8.8-inch infotainment screen. 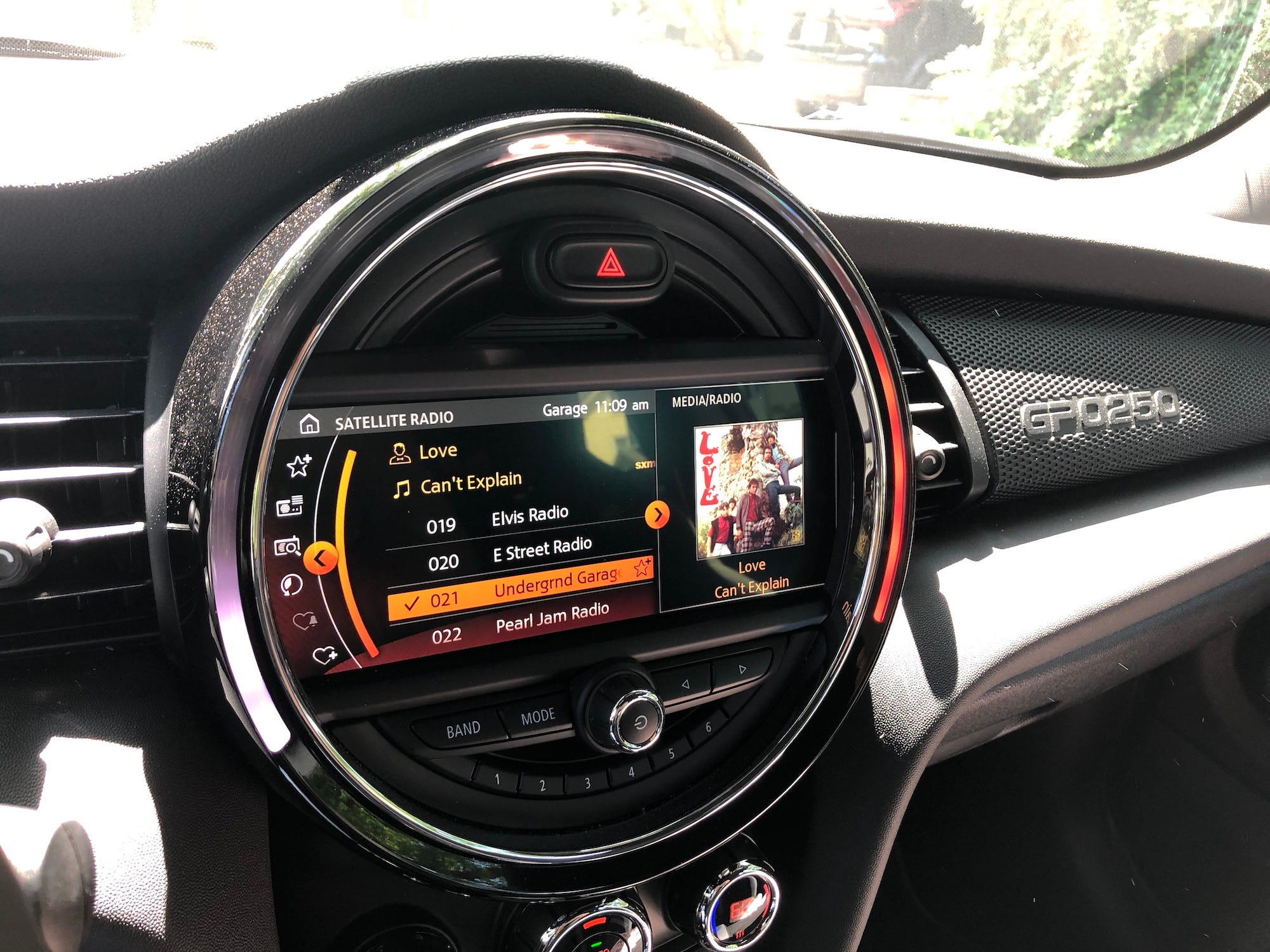 I’d rather have the speedo, but the system is effective: it handles Bluetooth pairing, USB device integration, GPS navigation, and audio perfectly well. 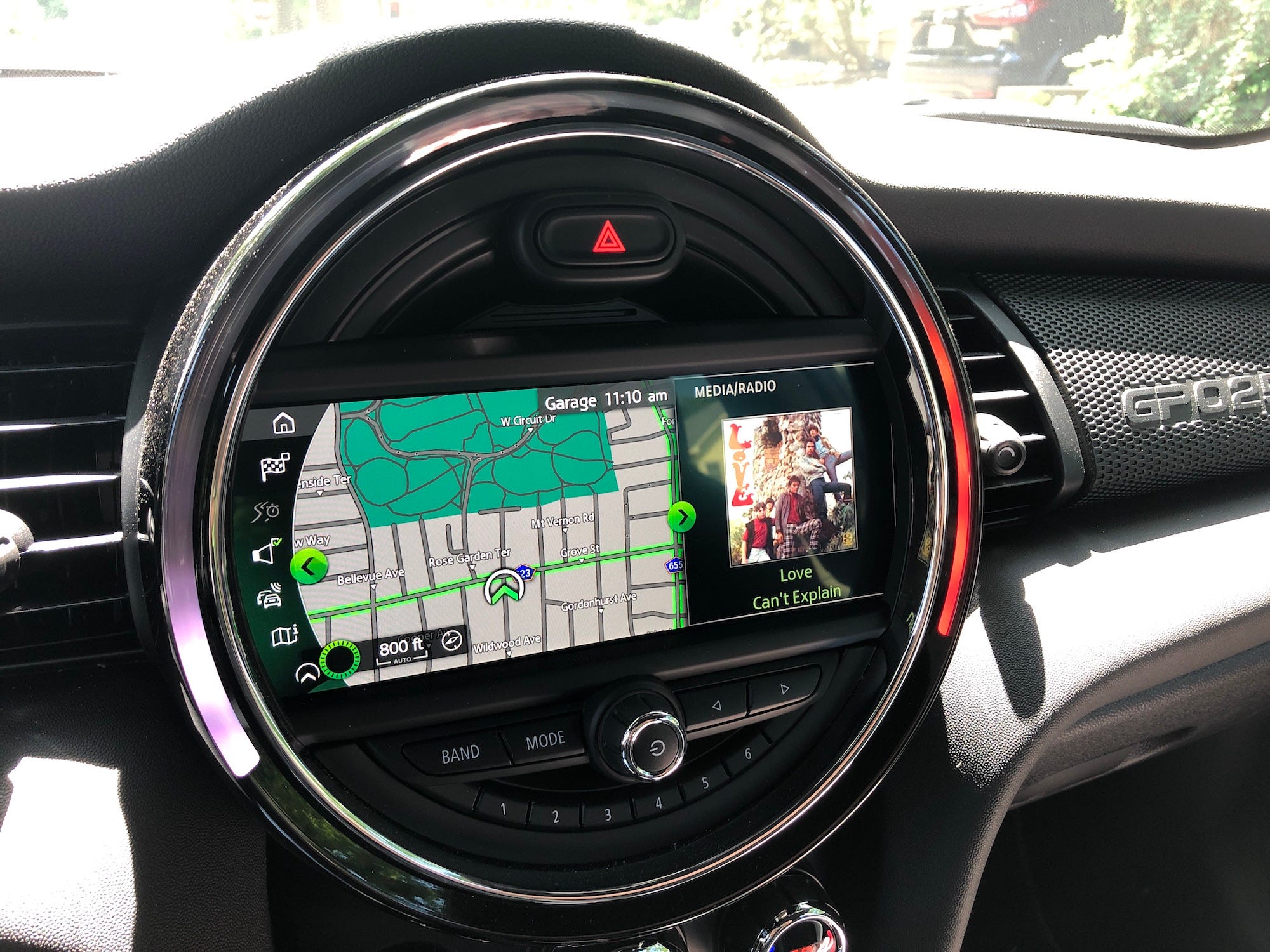 The system is controlled using this buttons-and-knob interface between the seats. 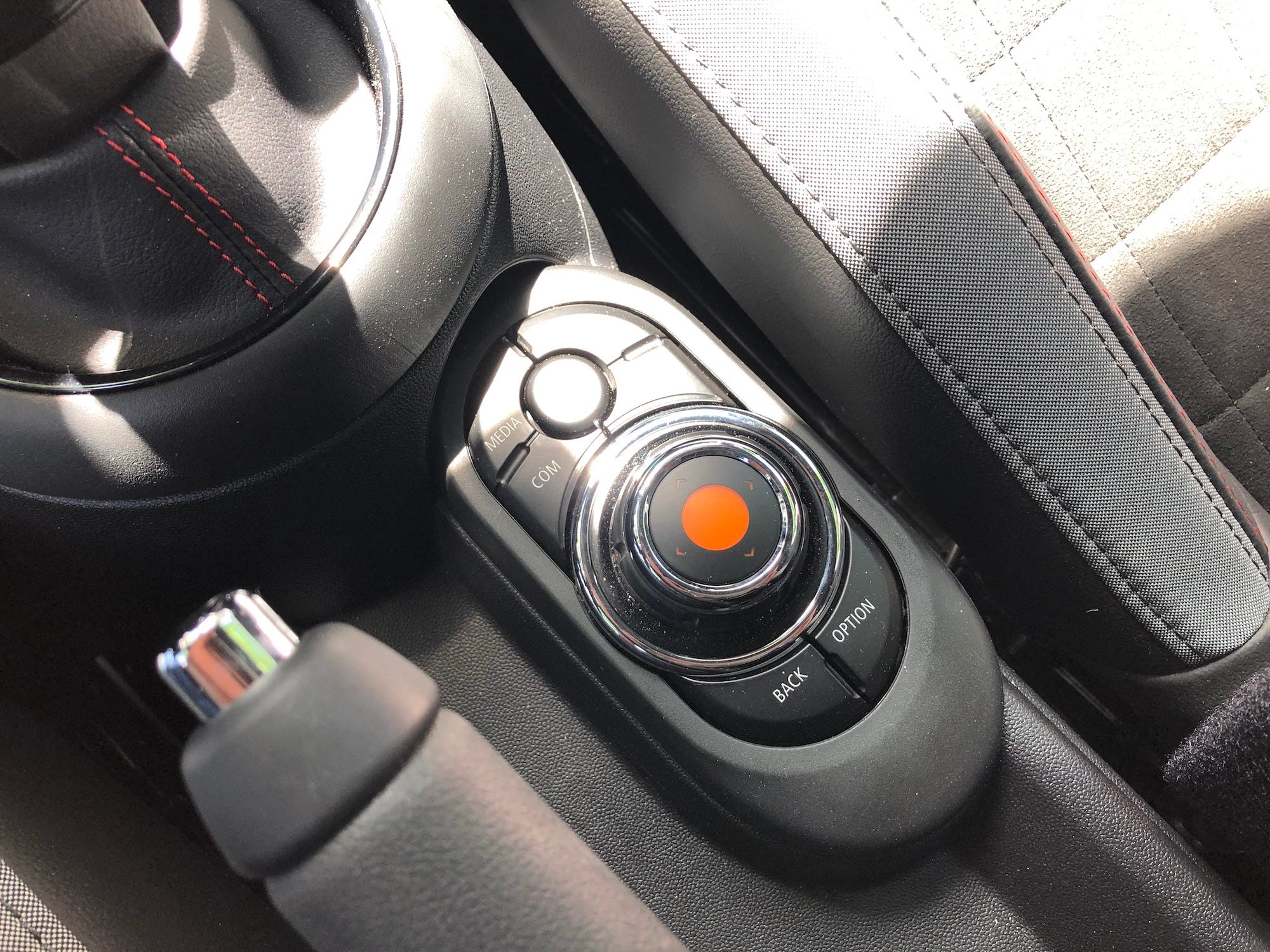 Otherwise, the climate controls are straightforward, and the switchgear is carried over from several previous generations of MINIs. 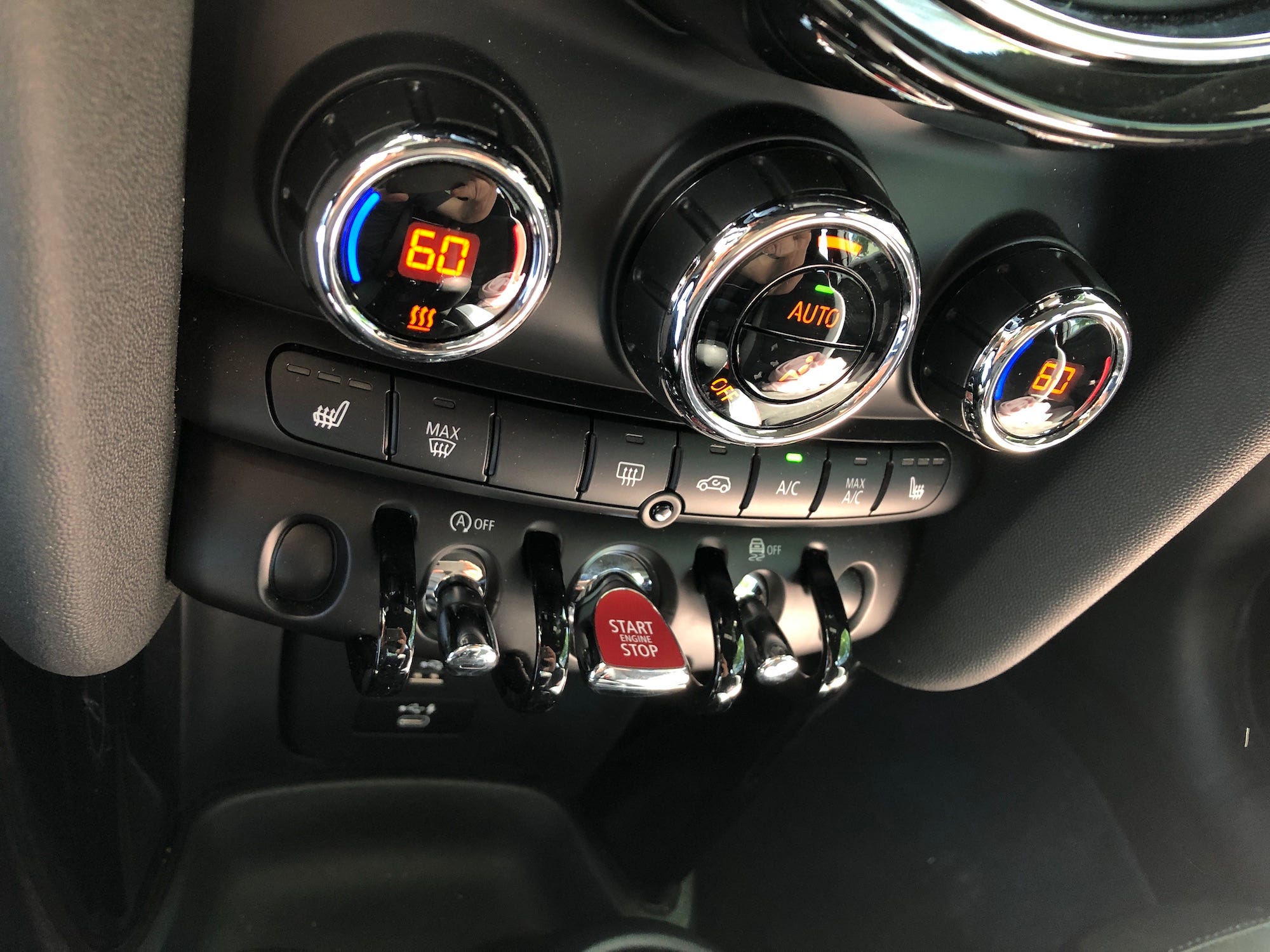 The start/stop engine switch, in bright red, is one my favourites in the entire auto industry. 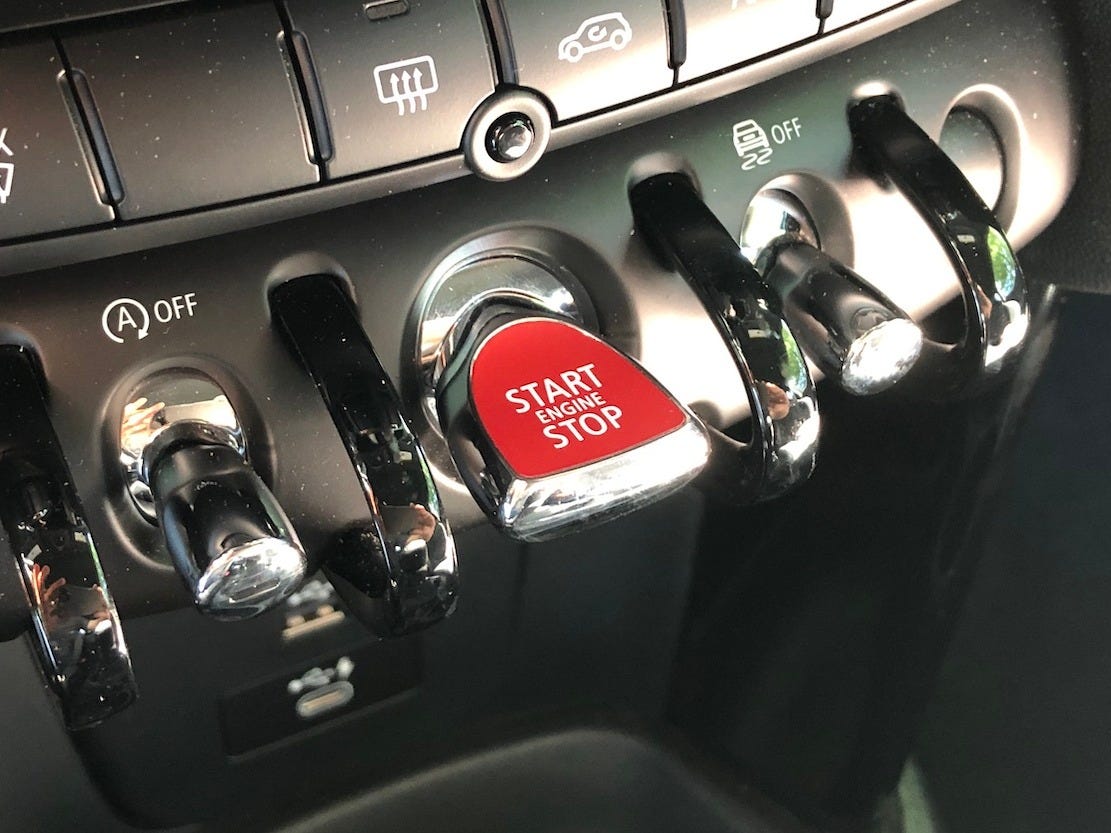 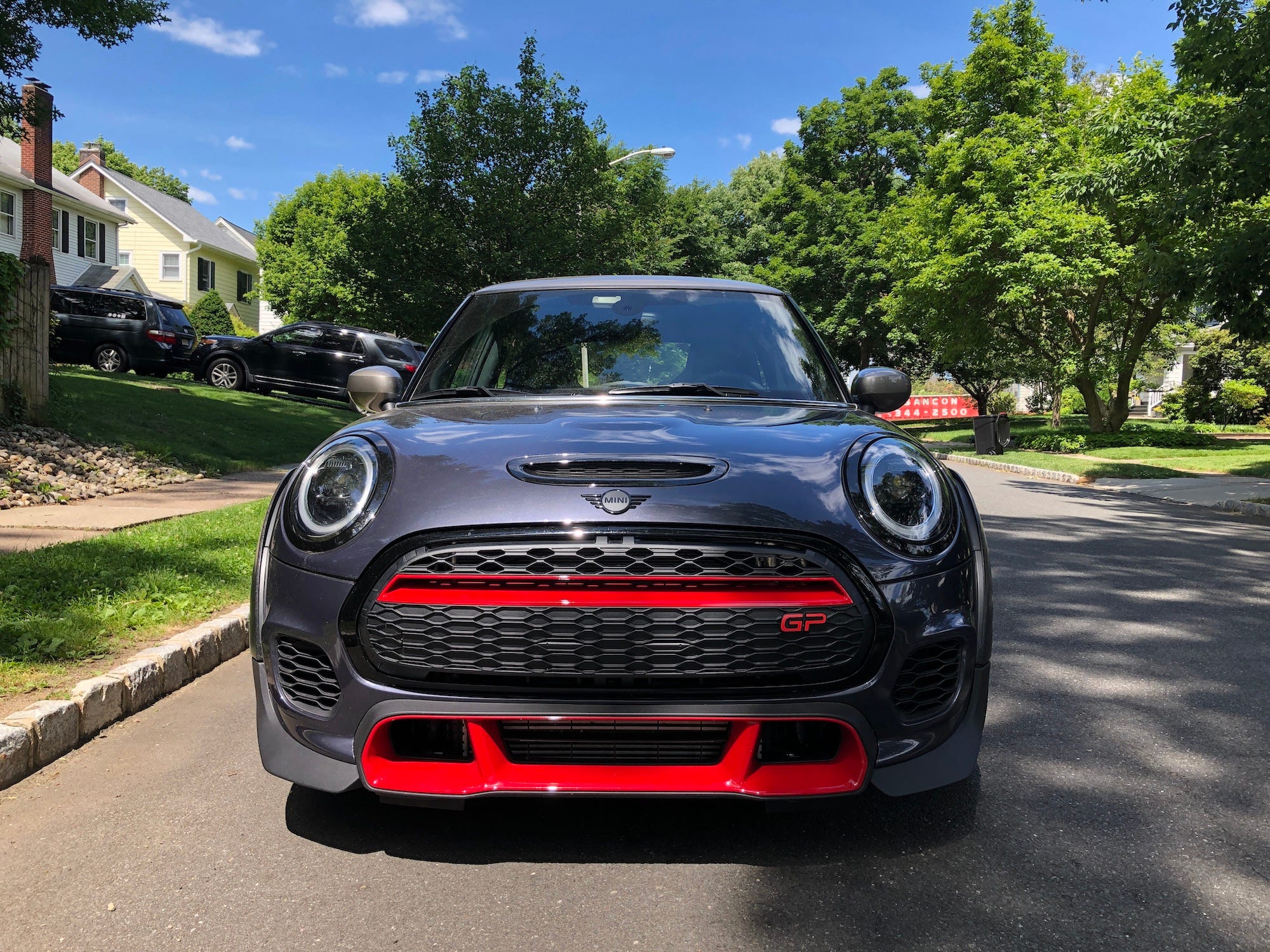 I’ve often thought that if I wanted to obtain a perfect weekend track car, the JCW MINI would be just what the doctor ordered. Yes, it’s moderately terrifying. But it would be perfect for setting some zippy personal lap times.

The JCW MINI GP is all of that and more, more, more. Beyond more rear wing – the JCW MINI doesn’t have one – the GP’s engine makes 75 more horsepower, bringing the total oomph above 300 horsepower and combining with a speed-optimised chassis to offer an enviable power-to-weight ratio. I’m inclined to poke fun at that big ole rear wing, which challenges the best that some 1980s Porsche 911s had to offer, not to mention a few Subaru WRX STi’s and of course the Honda Civic Type R. But the wing is, well, sort of necessary to keep this fling-able two-door stuck to the asphalt.

Interestingly, for a machine that can blast to 60 mph in about five seconds, the GP feels composed and stable. It doesn’t feel like the quickest street-legal car MINI has ever produced.

Still, the word “hardcore” suggested itself to me behind the wheel of the GP. MINI really thought it through. “Model-specific modifications include a reinforced crankshaft with enlarged main bearing diameter, specific pistons, bushless connecting rods, and a new torsional vibration damper with optimised cooling,” the brand said when the GP was revealed last year. Added to that is a new turbocharging technology, plus a new air-intake arrangement, all intended to jack up the ponies. It translates into an exhaust note that’s downright gnarly.

There wasn’t much I could do on civilian-grade roads to test out the GP’s mighty, race-ready suspension, but you can certainly feel the firmness in everyday motoring. It’s sort of unpleasant at times, but given how this car looks from the outside, you expect it.

Let’s just speculate on how the GP would handle a track. The straightaways would be a thrill, as all 301 horsepower gets laid down, the drivetrain counteracts any torque steer, the aero maintains drag-race stability, and the transmission zings through its gears. The front brakes are divine, so a slam-down to take on a corner would be followed by either brisk automatic or quick auto-manual downshift, then an effort of getting back on the throttle, pronto, to re-establish grip up front and power out. The steering is assured, so the entire manoeuvre could be executed with an attitude of supreme self-confidence.

I had to make do with some windy country roads, a feeble test for a maniac ride like the GP. But I at least caught a glimpse of what this car could do in its natural environment.

That isn’t the everyday highways and byways of normal life. But if you reckon you could at some point buy a racing helmet and start thinking about your own hot laps, there are worse ways to spend $US47,500. In fact, the MINI JCW GP gives you so much legit performance in one high-strung package you might be foolish to look elsewhere.