Hyperloop One got a little closer to making its ambitious, high-speed transit system a reality last week.

The startup successfully tested its full-scale Hyperloop system on its DevLoop test track in Nevada on Thursday. The vehicle coasted above the track for 5.3 seconds using magnetic levitation and reached a top speed of 70 mph. Hyperloop One will attempt to reach 250 mph in subsequent testing.

Hyperloop One is considering 11 possible routes for the first US-based transit system, but is also conducting feasibility studies Dubai and Finland.

Last year, Hyperloop One mapped out how the transit system could work in Dubai. Scroll down for a closer look:

The start-up announced in early November that it signed an agreement with Dubai Roads and Transport Authority to evaluate using the Hyperloop between Dubai and Abu Dhabi. Hyperloop One is conducting the feasibility study with McKinsey & Co. and the Bjarke Ingels Group.

As part of that announcement, Hyperloop One unveiled its concept for the futuristic transport system that it claims could travel at roughly 700 mph and take passengers from Dubai to Abu Dhabi in 12 minutes, which is normally a two-hour drive.

Here we begin the breakdown of Hyperloop One's concept for the system. First, passengers will use an app to see their transportation options that day. If a Hyperloop is available, the app will list it alongside other transportation options. If a passenger clicks the Hyperloop option... ... The app will list the gate where the high-speed system is available with details on how long it will take to arrive. As you can see from the app, part of that journey entails taking a pod from the designated gate listed on the app. Just like an aeroplane, there will be different classes of pods, like one designed for multiple people and a 'lounge pod' for fewer people to kick back and relax.

The pod will then travel to the entrance for the Hyperloop. Hyperloop One says there will be 120 pod gates accommodating over 8,500 passengers per hour. Four pods will be assigned to each Hyperloop tube.

Three of those pods will be for passengers with a separate one designated for cargo. And voila! You will have officially embarked on your Hyperloop journey. 'Imagine being in New York and being able to travel all the way down to Washington, DC, in 20 minutes,' Josh Giegel, Hyperloop One's president of engineering, said at the Web Summit conference in November. 'These type of stops become like metro stops. There is a level of human freedom to be able to live anywhere in the world.'

Once the Hyperloop tube arrives at its destination, the four pods will leave the tube, exit the station, and travel on the street to the passenger's final destination.

Here's a conceptual rendering of how the Hyperloop station will look like in Burj Khalifa Station in Dubai. And here's a look at the different station options Hyperloop One is considering for the transport system. The blue line indicates a route taken by the Hyperloop, while the pink line shows the route the pods will take once the Hyperloop arrives at its final stop. All of these movements will be monitored by a control center. Hyperloop One is also interested in using the Hyperloop to transport cargo.

The start-up secured $US50 million in a funding round led by DP World, the third largest port and terminal operator in the world, in October to study building a Hyperloop for transporting cargo. The $US50 million investment brought Hyperloop One's total funding to $US160 million, according to the start-up.

'The port system means unloading can happen offshore and the tube can unload the load in the desert,' Shervin Pishevar, executive chairman at Hyperloop One, said at the Web Summit conference. 'It gets trucks off the roads. You can unlock billions of dollars of waterfront property for redevelopment.' 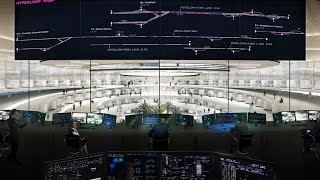