A massive 164-feet deep crater suddenly opened up on Siberia's Arctic tundra and it could be the result of an explosion triggered by climate change, scientists say 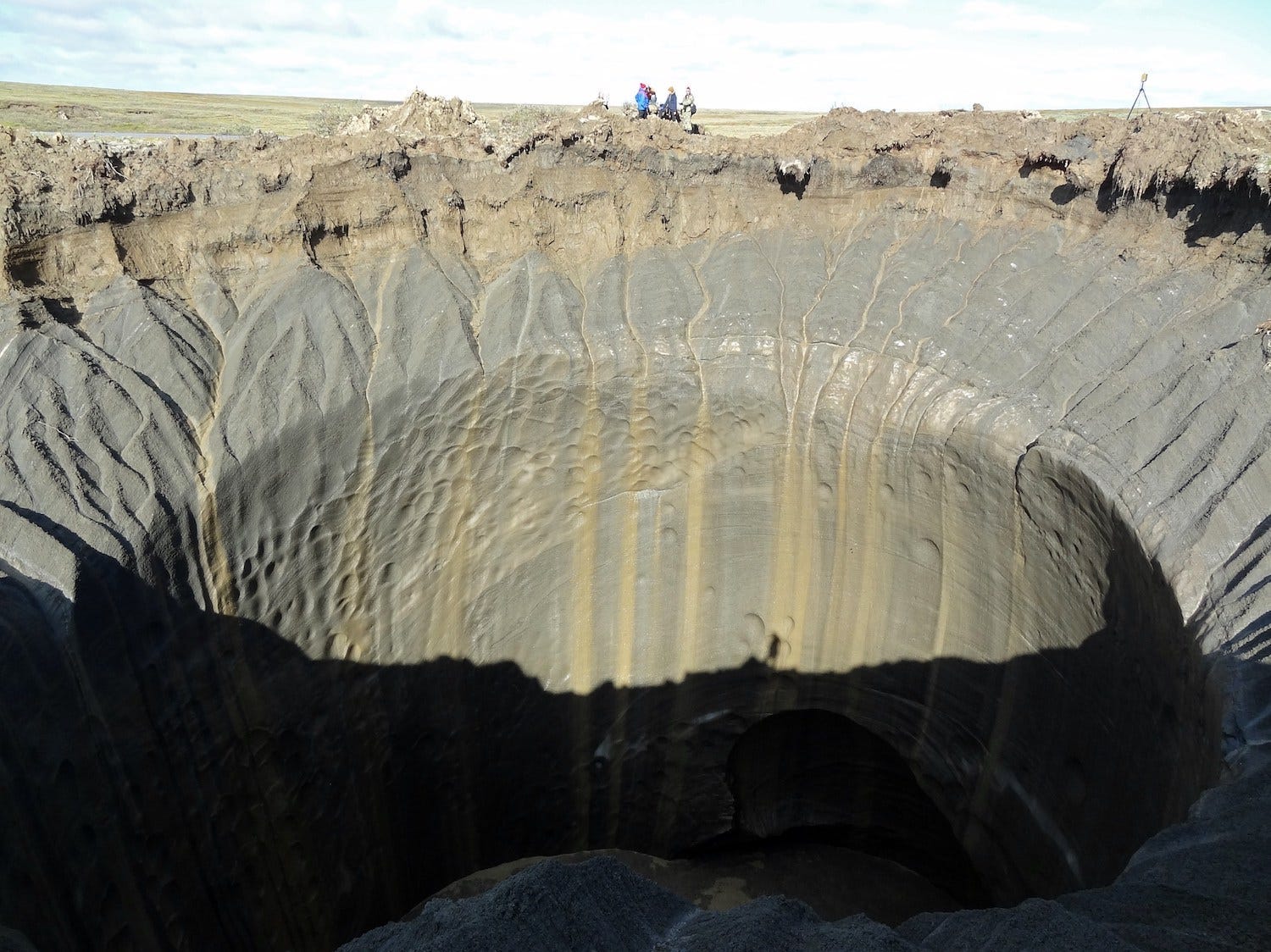 A massive 164-feet deep crater that has suddenly opened up on Siberia’s Arctic tundra could result from a climate change-induced explosion, scientists studying these formations have said.

The crater was accidentally discovered by a Russian film crew earlier this summer as they were flying over the Yamal peninsula in Siberia on an unrelated assignment.

A group of scientists, who have since visited the site, said that the hole most likely formed because of a huge explosion caused by the build of methane underneath the ground â€” a process otherwise known as cryovolcanism.

“As of now, there is no exhaustive theory for the formation of these craters,” Evgeny Chuvilin, a lead research scientist at Russia’s Skoltech Centre for Hydrocarbon Recovery who studied a similar crater found in the same the region two years ago, told Newsweek.

“The explosive events behind them are too rare and too hard to catch in the act to study properly: a fresh crater usually ‘lives’ for just one to two years, and these are remote areas with little observation, although that has been changing due to remote sensing and exploration of Yamal,” he added.

Nothing to see here, just a massive 50 meter (165 feet) crater in Siberia after methane probably made it collapse, in what's normally one of the coldest places on Earth

"The heat likely weakened the permafrost, priming it for all sorts of weird behavior"https://t.co/YGGV5gtc4B pic.twitter.com/VeKgdCJI7b

Two-thirds of the Russian territory consists of permafrost, which is a huge natural reservoir of the potent greenhouse gas, methane.

The built-up methane puts an immense amount of pressure on the ground, so once the permafrost over it begins to thaw, it becomes unstable and can cause massive explosions.

As temperatures rise across the world and the climate warms, melting permafrost is becoming more common and therefore leading to more crater formations, the scientists say.

“Climate change might also be one factor in these cryovolcanic processes, as excessive warming in the top permafrost layer can arguably contribute to these explosions. But this is still something that requires a lot of careful research,” said Chuvilin, according to Newsweek.

The crater is at least the ninth of its kind spotted in the region since 2013.

Chuvilin and his team have been going down these craters for several years to determine how they form.

But the scientists must do their work â€” which requires ascending down the holes with climbing gear â€” as quickly as possible, as the craters usually turn into lakes within two years, CNN reported.

“The main issue with these craters is how incredibly fast, geologically, they form and how short-lived they are before they turn into lakes,” Chuvilin said, according to CNN. “Finding one in the remote Arctic is always a stroke of luck for scientists.”

Chuvilin, who says the newest crater is one of the biggest they have found so far, promised that his team would publish more detailed information on the natural phenomenon in an upcoming scientific journal.