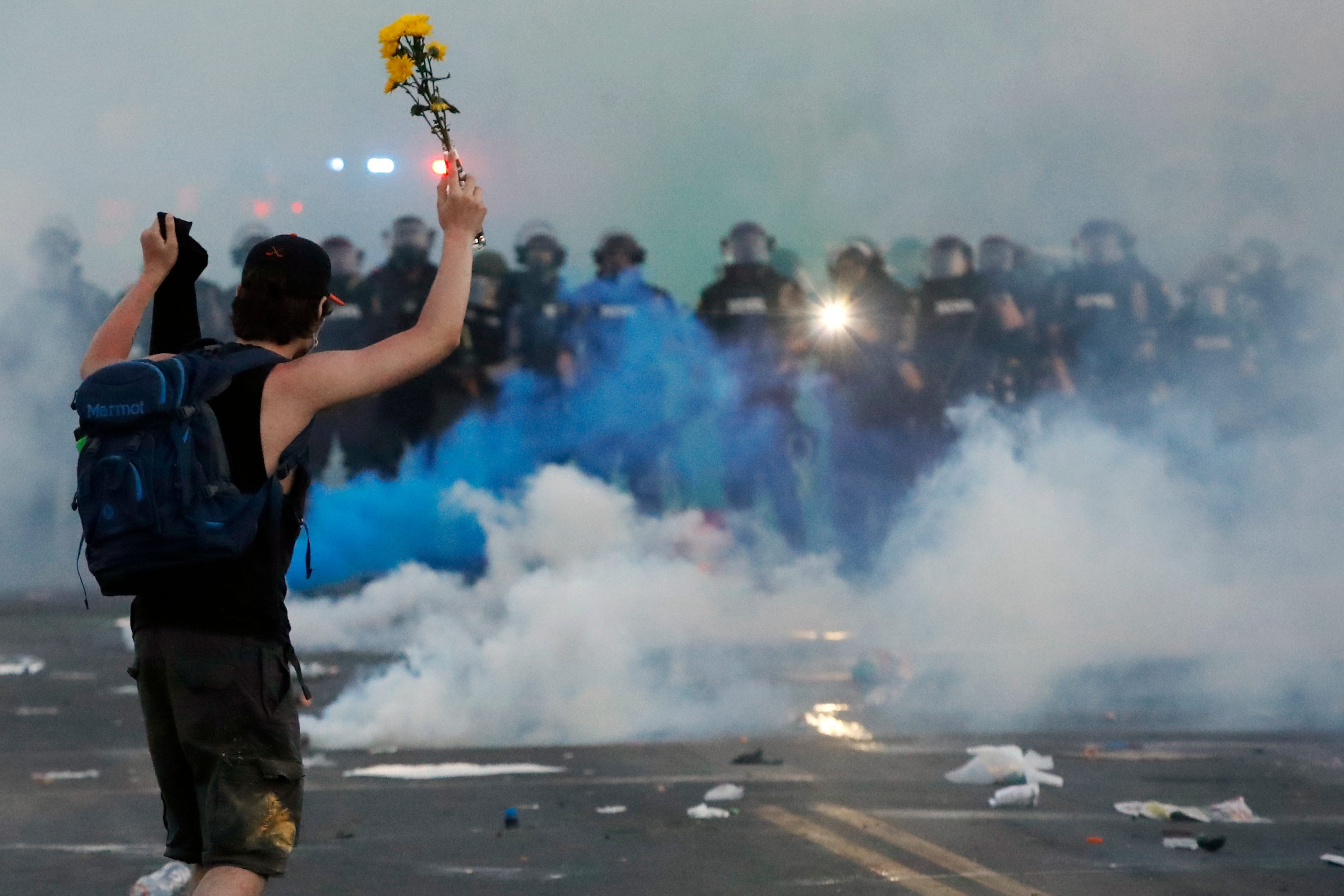 Associated PressPolice move toward a protester after curfew Saturday, May 30, 2020, in Minneapolis. Protests continued following the death of George Floyd, who died after being restrained by Minneapolis police officers.

Black Americans have long suffered oppression, violence, police brutality, and discrimination in the US. That long history is coming to the forefront of the national conversation as protests continue in the wake of the killing of George Floyd, a black man who died after being violently restrained by a white police officer in Minnesota.

That conversation is especially coming up in workplaces across the country. Many white or non-black Americans are looking to offer their support to black colleagues. But it’s important to do so in a sensitive manner, especially given that so many people are working remotely amid the coronavirus pandemic and are lacking face-to-face contact.

Before taking action, it’s key to understand that this is a very difficult time to be black in America, says Beverly Tatum, a nationally recognised scholar and author of multiple books on race in America.

“I think many black people are experiencing fatigue. Of course, there’s anger and frustration, but fatigue because it’s not like this hasn’t been going on forever,” Tatum, who is also a licensed clinical psychologist, told Business Insider.

The second thing to realise is that you alone cannot fix years of oppression with a simple message to your coworkers.

“This is something that we all have to fix. And a lot of the issues are systemic: dealing with institutional racism, dealing with systems of oppression,” said David Staten, a licensed clinical counselor and professor of rehabilitation counseling at South Carolina State University.

However, there are a number of actions you can take to make your black colleagues feel supported. And while you don’t need to (and probably shouldn’t) send a message to every black person you work with, experts told Business Insider it’s worth reaching out to those with whom you work directly.

Check in with black colleagues and offer your support

“Hey, I understand that there’s a lot going on. And I’m not sure if there’s anything that I can do, but if there is something I can do, I’ll be more than willing to extend myself or to be available to just listen.”

“I care about the Black Lives Matter movement. And I’m committing to staying involved whether it is popular or not. Here’s what I’ve been doing … Are there things you need personally that I can have your back on at work?”

If you’re curious about the history of racial injustice, slavery, police brutality, or other issues, don’t put the burden on your black colleagues to explain these things to you. Asking seemingly innocuous questions could be exhausting or triggering, Tatum says.

Instead, begin by educating yourself, she says. Order books on the topic, watch informative videos, and read first-person accounts and op-eds from black thought leaders. Various national leaders have given out their recommendations for learning about race relations, among them former President Barack Obama.

The exception to this, however, is if you and a black colleague at work are good friends, Tatum says. If you are already close, you could ask your friend more detailed questions about current events. However, approach the conversation with sensitivity and understand they might not want to talk about it.

Be mindful that some colleagues may not want to talk about these issues.

Staten says that even talking about police brutality, for example, can trigger symptoms of post traumatic stress disorder.

“There’s a feeling of hopelessness,” Staten said. “No matter what we do in life, how successful we are, none of that really matters because our skin colour in large part kind of colours how society views us.”

Recognising this is important because it makes you aware that what may seem like simple news items to you could gravely affect your coworker or friend.

“I think the biggest thing in creating that safe space is advocating for others,” said Christen Johnson, a family physician in Columbus, Ohio, who is also a public health expert specializing in health equity. “It’s the importance of inclusion: That they feel like they are safe to speak their mind. They are safe to be who they are. They are safe to not feel that being themselves naturally and authentically is going to get them attacked.”

For example, if you’re in a room of white colleagues and someone makes a comment about an interviewee’s Afro-centric name, say something about it. Challenge stereotypes and unconscious bias, which are preconceived notions about people often based on their looks. Call out microaggressions, or subtly racist comments or questions, when you see them.

Advocate for the creation of employee resource groups if your company currently doesn’t have any. These can be great spaces for workers of colour and their allies to start important, ongoing conversations. In fact, a number of diversity and inclusion executives from top companies like Twitter, SAP, and LinkedIn previously told Business Insider that a core part of their fight against inequality has been expanding employee resource groups.

If there’s a lack of diversity in your office, raise the issue with your HR representative or manager.

“A white person should think to themselves, ‘What can I do to make a difference?'” Tatum said.

That’s where the important work begins.