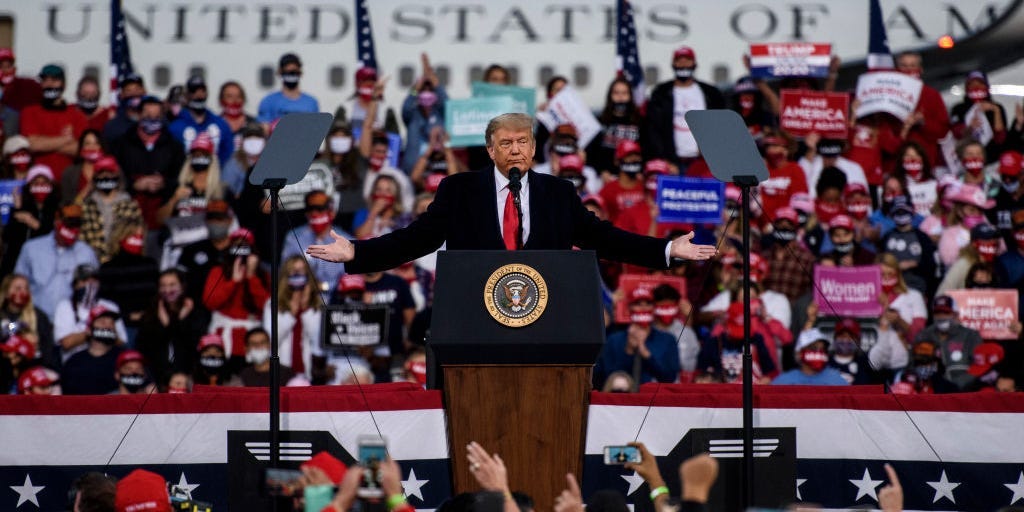 Democratic presidential nominee Joe Biden is outpacing President Donald Trump in the quest to win the White House. And Trump has already signalled that he and his campaign are ready to do whatever it takes to duke it out with Biden in court to secure a second term in office.

“We’ll be going to the US Supreme Court,” Trump said in a speech where he falsely declared victory in the presidential race Tuesday night. It was unclear what Trump thought needed to be litigated if he believed himself to be the winner, and he did not elaborate. He also appeared to conflate voters casting ballots with election officials counting those ballots.

“We want all voting to stop,” the president said. “We don’t want them to find any ballots at 4 o’clock in the morning and add them to the list.”


Sign up here: Join us at 2:30 PM ET on Thursday for a look behind the election numbers with Insider data editor Walt Hickey

It typically takes days to weeks to fully count and process all ballots cast in an election, and the results are never finalised on election night itself. Every state is still counting and certifying ballots, though news organisations (such as Business Insider) have projected electoral-college winners for different states based on the known number of ballots cast.

“The idea that there’s a right to stop counting, period, doesn’t make any sense,” Richard Briffault, a Columbia Law School professor who studies election litigation, told Business Insider. “The count should go on as long as there are legal votes to be counted. It has never been the case that counting will stop after Election Day.”

Still, by Wednesday afternoon, the Trump campaign had asked for ballots to stop being counted in Michigan and Pennsylvania. Decision Desk HQ projected that Biden won Michigan Wednesday afternoon, and Trump is ahead in Pennsylvania, though the race has not yet been called and more than 1 million ballots have yet to be counted. The president also requested a recount in Wisconsin, a state Biden was projected to win earlier in the day.

Trump signals his path to suing may run through Pennsylvania

Neither Trump nor his campaign made clear how the president would challenge the election in the Supreme Court. And it’s unclear what legal basis the president has for litigating the results. Trump baselessly said in his speech that the Arizona results â€”which favour Biden but have not yet been officially called â€” “could be overturned,” without explaining what that means or how. The Trump campaign didn’t immediately respond to Business Insider’s request for comment.

Ned Foley, a top election-law expert at Ohio State University,wrote in The Washington Post that “there is not one iota of possibility that the US Supreme Court, or any court, would disqualify those ballots.”

“The remaining uncalled states, where not even unofficial winners have been projected by the media, are not yet in a recount situation,” he added. “Vast numbers of ballots have not yet been counted for the first time. Until that happens, it’s premature to imagine that this election, as in 2000, might be decided in court.”

Experts agree that Trump’s most likely path to challenge the electoral process in court runs through Pennsylvania. Indeed, the Trump campaign has already filed a motion to intervene in a Supreme Court case over how ballots are counted.

Pennsylvania’s Supreme Court ruled last month that election officials could receive and count ballots until November 6 as long as they were postmarked by Election Day. Republicans requested a stay from the US Supreme Court that would have blocked the state court’s ruling.

But the US Supreme Court was deadlocked at 4-4, leaving the lower court’s ruling in place. Justices Neil Gorsuch, Brett Kavanaugh, Clarence Thomas, and Samuel Alito voted to grant Republicans’ request, while Chief Justice John Roberts and Justices Stephen Breyer, Elena Kagan, and Sonia Sotomayor dissented. While the split vote was a loss for Republicans, it left the door open for them to appeal the case once again.

Justice Amy Coney Barrett declined to participate in this round of litigation “because of the need for a prompt resolution of it and because she has not had time to fully review the parties’ filings,” the court said in a statement. However, Barrett has not recused herself, meaning she could still cast the decisive fifth vote in future litigation.

Moreover, with Barrett on the Supreme Court and a solid 6-3 conservative majority, there’s a good chance the Pennsylvania state Republican Party will have its case heard once again. The party has already submitted another appeal, and while the Supreme Court hasn’t yet agreed to take on the case, there’s still time to do so.

Trump has repeatedly threatened litigation in the state while on the campaign trail, indicating he may try to join the case as a party. Until then, counties are segregating ballots that arrive between 8 p.m. Tuesday and 5 p.m. Friday, in case the Supreme Court ultimately rules to throw them out.

Briffault said it would be unusual for the US Supreme Court to change things in Pennsylvania now. Doing so would invalidate the state Supreme Court’s interpretation of the state’s voting-rights statute.

“There’s a legitimate argument that the state, based on its high court, ruled that due to the problem of the Postal Service, there’s a need for the ballots to come in,” Briffault said. “The Supreme Court declined to stop that but did not decide on the merits.”

Foley wrote: “Even if the court were to agree with the Republicans on their federal constitutional claim, it is doubtful that a majority of justices â€” having allowed the state-court extension to remain in place â€” would also agree to invalidate ballots that benefited from the extra time.”

Pennsylvania may not be enough for Trump to win

It’s also crucial to note that even if Trump successfully litigated the results in Pennsylvania, winning Pennsylvania’s electoral votes likely wouldn’t be enough for the president to secure a second term in office, given the way the race is shaping up.

This year, it increasingly looks like the final results will hinge on Michigan, Wisconsin, and Pennsylvania, the three Rust Belt states that Trump flipped from blue to red in 2016 to win the White House.

Biden has already been projected to win both Michigan and Wisconsin.

The president is leading Biden by 5 points, or nearly 320,000 votes, in Pennsylvania. However, more than 1 million ballots have not been counted yet. Also, if Biden were to win Arizona and Nevada â€” two key states he led Trump in as of Wednesday afternoon â€” his victories in Michigan and Wisconsin would be enough to secure 270 electoral votes, even without a win in Pennsylvania.

Trump is also challenging the ballot-counting process in Michigan. He asked the Michigan Court of Claims to force the state to stop tallying ballots, arguing that the campaign has not gotten “meaningful access to numerous counting locations to observe the opening of ballots and the counting process, as guaranteed by Michigan law.”

Even if the Trump campaign succeeded in that case, it would not affect the tally of the ballots, only the pace at which they are counted.

Moreover, much of the country’s election-related litigation has already been settled. Hundreds of lawsuits have been filed this year ahead of Election Day, centering on the rules over voting, which every state has changed because of the coronavirus pandemic. Most of them have already been decided.

Then there’s the issue of timing. The high court typically hears cases only after they have worked their way up through the lower courts and then a federal appeals court. In a presidential election, a case involving a dispute over the results could be fast-tracked, but that could still take weeks. In Bush v. Gore,for instance, it took more than a month for the Supreme Court to hand down a ruling.