APIt’s easy to take screenshots on a Mac.

If you see something great online, it’s only natural that you’ll want to share it with others. Obviously you could send a link, but what if you only want to point out a specific section or image?

This is where screenshots come in. You can take high quality screenshots on any Mac computer, and then edit or share them however you like. They will automatically be titled “Screen Shot,” followed by the date and time you took them.

If you’ve bought or updated your Mac since 2018, you even have access to the advanced screenshot menu, which will let you take videos of your screen too.

Best of all, taking screenshots on a Mac only takes a single keyboard shortcut. Which shortcut you use, though, depends on how you want to take the picture.

Here’s four ways to take screenshots on a Mac.

How to screenshot on a Mac

Every method for screenshotting on a Mac uses the Shift, Command, and number keys. In short:

It should also be noted that if you hold down the Control key while you take your screenshot, it will copy the screenshot to your clipboard instead of saving it.

We’ll go over all of them below, starting with the most widely applicable method: the screenshot menu.

The screenshot menu was introduced in MacOS Mojave, the big 2018 update â€” if you’ve bought or updated your Mac since then, there’s a very good chance you have it.

To open this menu, press Shift + Command + 5. A small bar will appear at the bottom of the screen.

The “Capture” button on the far right will take the screenshot, or begin recording the video. 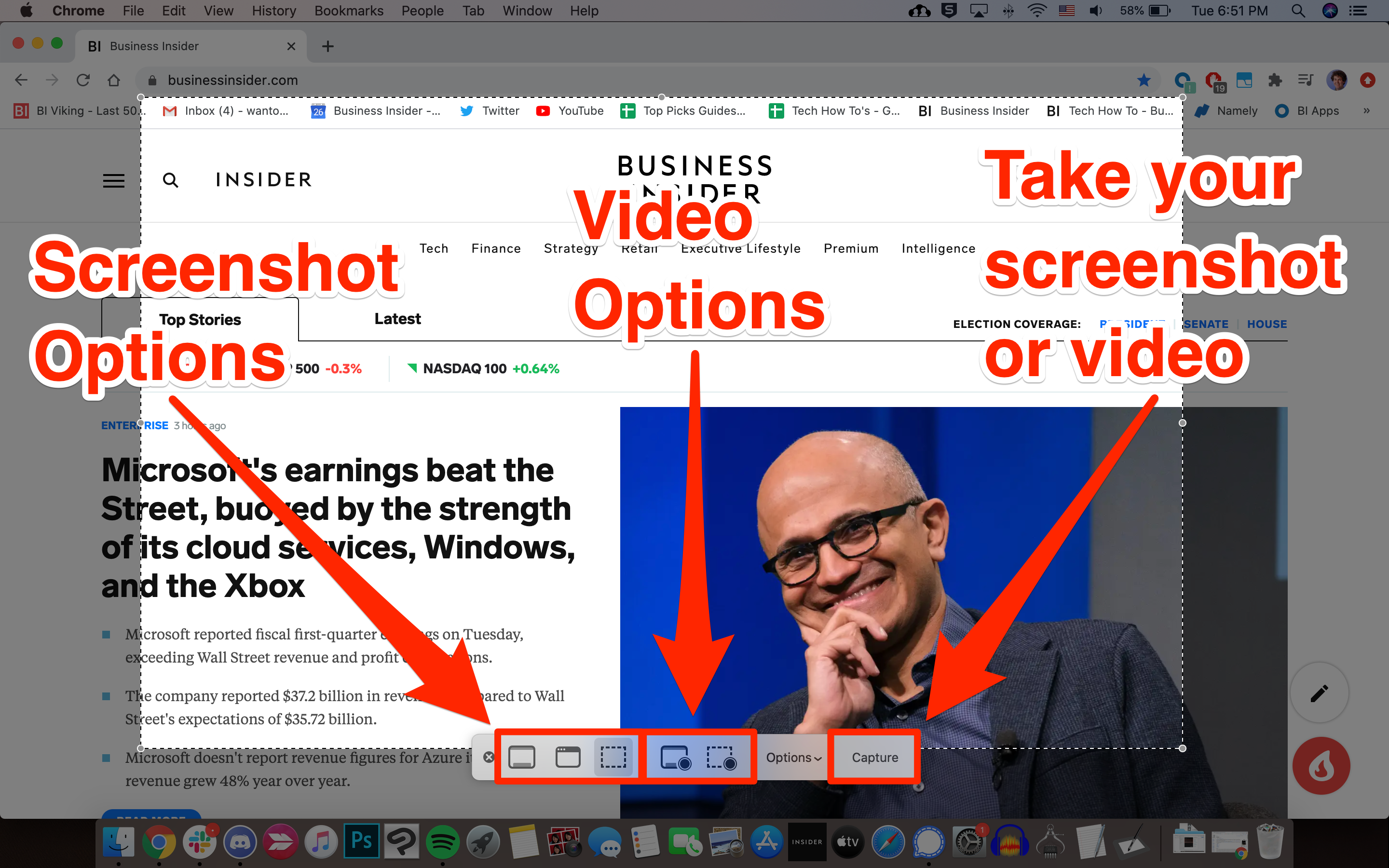 William Antonelli/Business InsiderThe screenshot menu will offer you a variety of options. 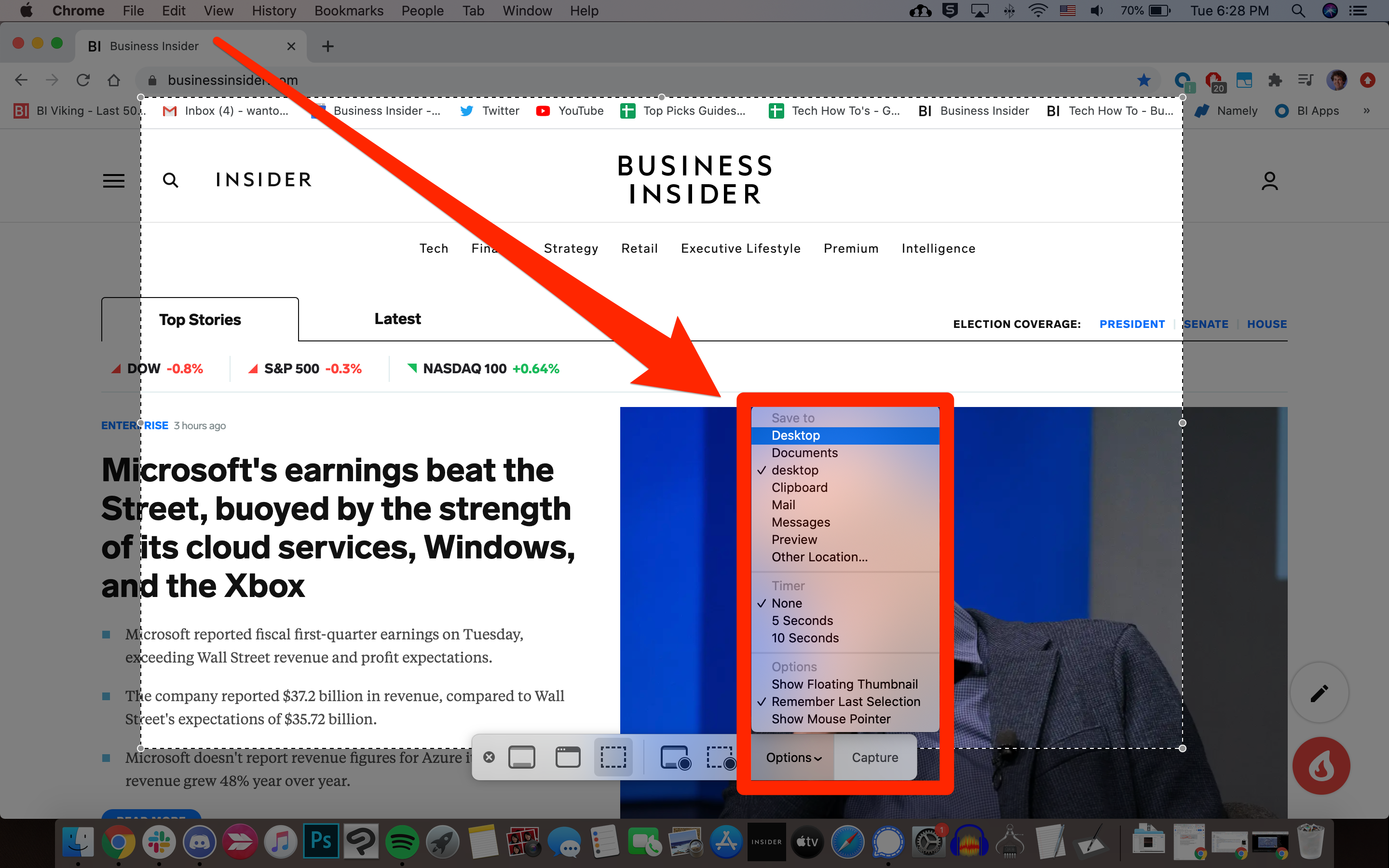 William Antonelli/Business InsiderThe options menu will let you customise how your screenshots are taken.

Of note in this menu is the “Show Floating Thumbnail” option, which is turned on by default. When this is enabled, after you take a screenshot, a tiny thumbnail of it will appear in the bottom-right corner of the screen. The screenshot won’t be saved to your computer until this thumbnail disappears after a few seconds.

However, you can click this thumbnail before it disappears to open the screenshot in a new window. In this window, you can draw or type on it, crop it, share it via your Apple ID account, or delete it. 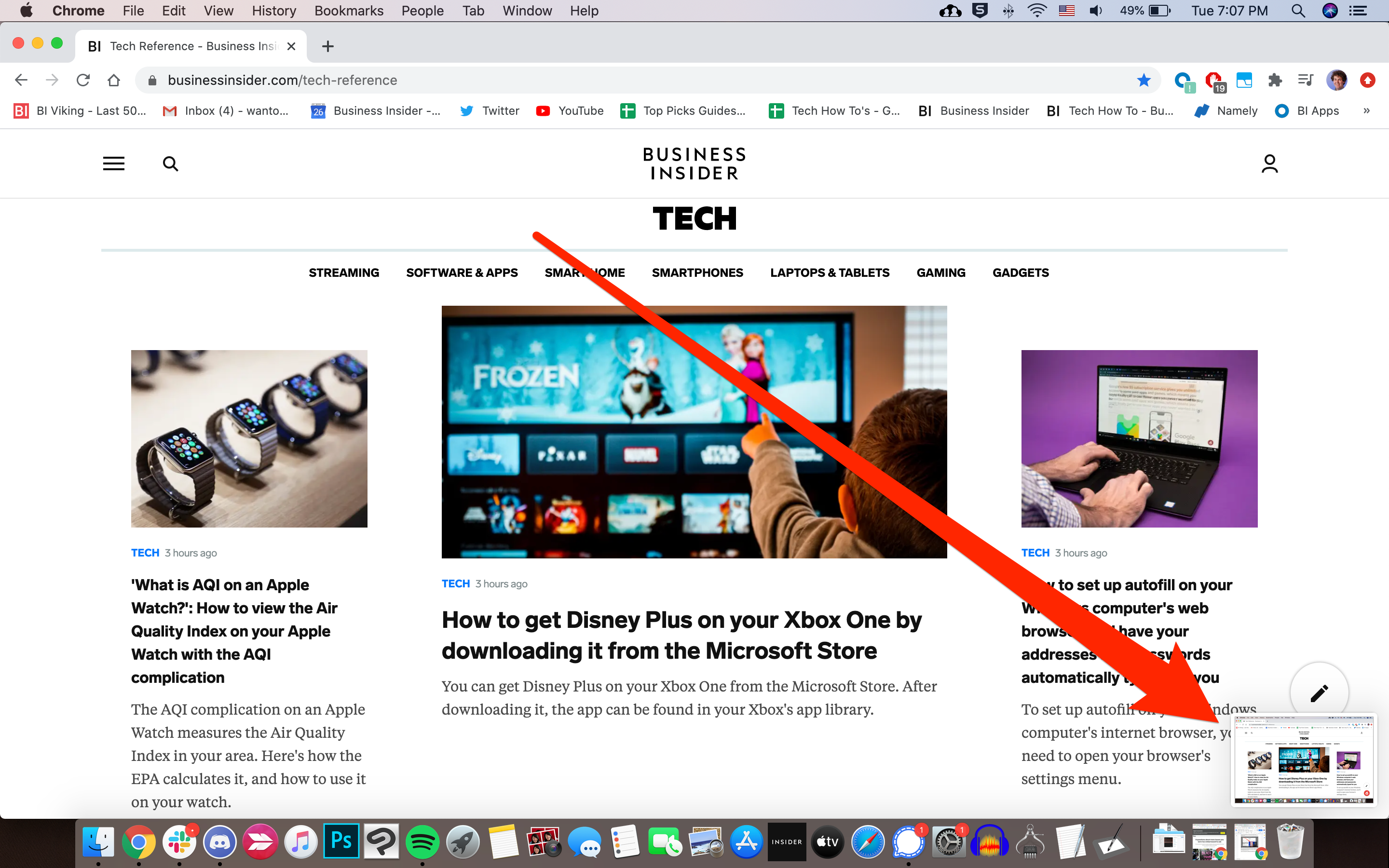 William Antonelli/Business InsiderYou can make the floating thumbnail disappear faster by clicking and dragging it off the screen.

Taking a screenshot of a highlighted section or window

If you want to take a quick screenshot without going through the screenshot menu, you can use this shortcut.

When you press Shift + Command + 4, your mouse cursor will turn into a crosshair. You can then click and drag this crosshair across the screen to create a highlighted box â€” as soon as you let go of the mouse, your Mac will screenshot everything in the box. 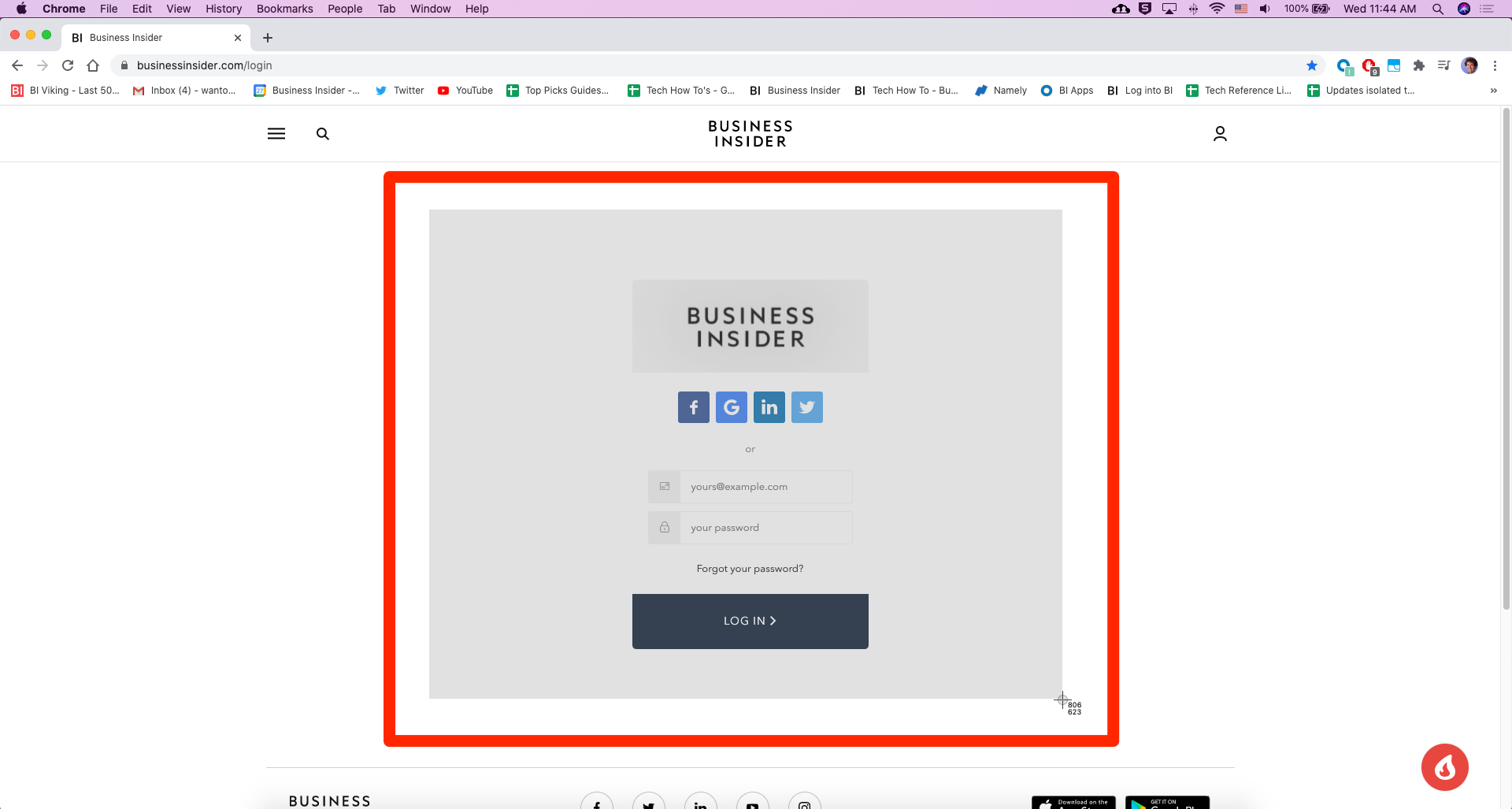 William Antonelli/Business InsiderEverything in the highlighted box will be screenshotted.

But this isn’t all you can do with this shortcut.

If you press Shift + Command + 4, and then press the spacebar, your crosshair will turn into a camera icon. You can then click on any open window to take a screenshot of that window â€” when the screenshot is saved, it will have a grey border around it.

If you drag the crosshair to create a highlighted box,and then press andholdthe spacebar, it will lock the box so it can’t change size. You can then drag the box anywhere on the screen. Just release the spacebar to take your screenshot.

Similarly, if you drag to create a highlighted box and then press and hold the Shift key, you can adjust solely the height or width of the box. Move your mouse up or down to adjust the height, and left or right to adjust the width. Let go of the mouse to take the screenshot.

Taking a screenshot of the entire screen

Pressing Shift + Command + 3 will immediately take a screenshot of your entire screen. If you’re using multiple monitors, it will take and save screenshots of every monitor.

Taking a screenshot of the Touch Bar

Not all Mac computers have the Touch Bar, a long but thin touch screen built into the keyboard. But if your MacBook does have one, you likely know how useful it can be.

AppleThe Touch Bar screenshot will be as long as the actual Bar.

If your Mac doesn’t have a Touch Bar, pressing this won’t do anything.

Maya Kachroo-Levine contributed to an earlier version of this article.