How To Test Firefox 4 Without Getting Rid Of Firefox 3

We all want a faster, more efficient web browsing experience. Some immediately flocked to Google Chrome as soon as it was released, because of its super fast speeds. Others restrained themselves and continued to wait for Microsoft and Mozilla to play catchup. And the time is almost here for all Internet junkies to improve their game.

Microsoft has set the final release date for their much anticipated Internet Explorer 9 for March 14th. Mozilla is still working hard to make Firefox the best browser for web geeks, wand it’s not quite ready, but it’s almost here. In fact, they just released the Firefox 4 Release Candidate to the public, which means the final release is fast approaching.

If you just can’t wait any longer, download the Firefox 4 RC and see what it has to offer. Plus, you can help Mozilla improve and fix any last minute bugs before the big finale. See a full list of the new features here.

What if you’re not willing to let go of Firefox 3.6 just yet, though? If you install the Release Candidate, it will overwrite your 3.6 installation and transfer all of your information (bookmarks, settings, etc.) to the new version. If you’re the cautious type (like me), you’re not willing to immediately switch, considering it’s not a final version. Some of your favourite add-ons could be non-compatible with the new Firefox 4, making it worth the wait until it’s fully released and developers have begun to update those plug-ins.

But… there is a way to run Firefox 4 RC without trashing Firefox 3.6 altogether. In fact, you can run them at the exact same time in Mac OS X without conflict. It just takes a little work. And I mean little. 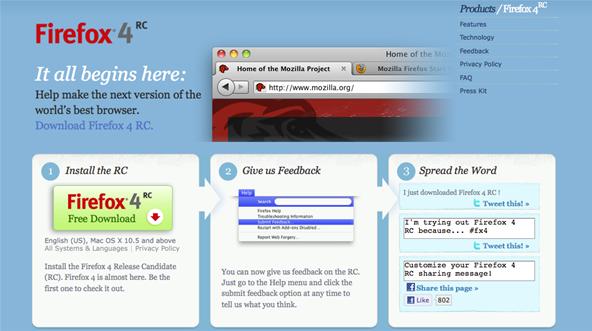 Step 2 Install on Desktop
Once it’s fully downloaded, open the .dmg file, but DO NOT drag Firefox into your Applications folder. 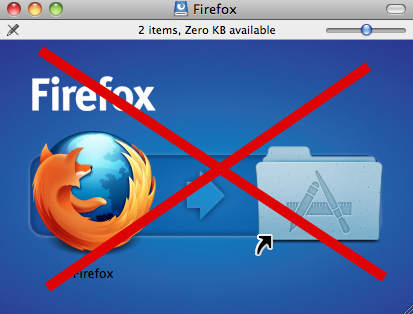 Instead, drag and drop it onto your desktop.

Step 3 Rename It
You need to rename the Firefox 4 application on your desktop. Select the icon and press enter to highlight the text in the title. Rename it to whatever you want—I chose FirefoxRC.

Step 4 Add to Applications
Now that the program has been names differently than your already installed Firefox 3.6, it’s OK to toss it into your Applications folder. Simply drag and drop into Applications.

Now for the hard part, which isn’t really that hard, even with absolutely no knowledge of command line.

Step 5 Open Terminal
You can find the Terminal application in the Utilities folder in Applications.

Then, type in the following line (and press enter).

The Firefox Profile Manager will open. You should only have on user profile, called “default”. 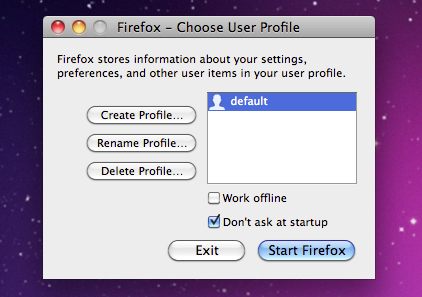 Step 7 Create a New Profile
Now you need to create an additional one for use with Firefox 4. Just click on Create Profile and choose your profile name—I chose FirefoxRC, just like my application title. 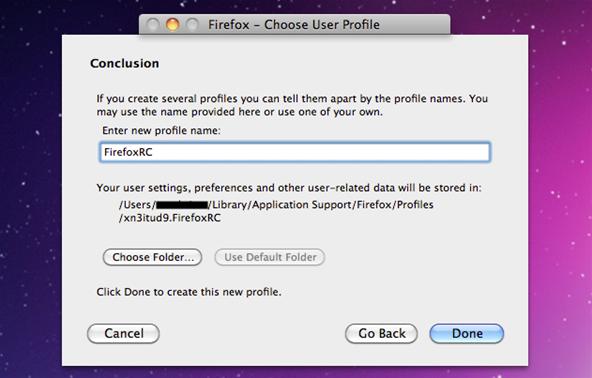 Step 8 Prevent Firefox from Auto Choosing Profiles
OK, now that you’ve create a new Firefox user profile, there’s one problem—Firefox will automatically choose the user profile when starting up, meaning when you open up Firefox 3.6 or Firefox 4, both will more than likely use your new user profile, meaning all plug-ins and bookmarks you had will be gone.

To stop this from happening, you need to un-check the box next to “Don’t ask at startup“.

Now, click on the Exit button to close the Profile Manager. You may also close Terminal.

Step 9 Open Firefox (Either One… Or Both)
OK, now time for the test. Go to your Applications folder and try opening up either Firefox 3.6 or Firefox 4. You can open both if you want, to run them side by side.

Each time you try and open up either version, the Firefox Profile Manager will open and ask you which user profile you want to use. If opening up Firefox 3.6, choose default. If going for Firefox 4, choose FirefoxRC (or whatever you named it).

And like I said, you can run both at the same time. Just make sure to choose their respective profiles when starting. 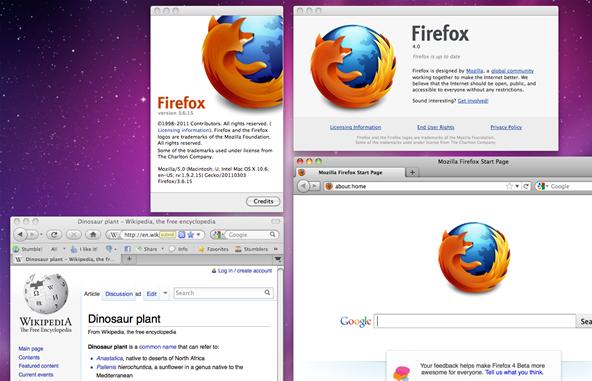 These instructions should work with any versions of Firefox, even the new upcoming final release of Firefox 4. And I imagine the process is similar on Windows, but don’t quote me on that.

Via How To Run Firefox 4 and 3 Simultaneously in Mac OS X with Multiple Firefox Profiles on WonderHowTo.