Peter Dazeley/Getty ImagesConsuming too much salt can lead to long-term health conditions like high blood pressure.

Your body needs sodium because it keeps your muscles and nerves running normally. Yet, 90% of adults in the US eat too much sodium, which can raise the risk of high blood pressure, stroke, and other dangerous conditions.

How much sodium you should consume

“Most people consume too much salt,” says Julie Garden-Robinson, PhD, a registered dietitian and professor at North Dakota State University.

The American Heart Association recommends that adults take in no more than 2,300 milligrams per day, which is roughly the amount of sodium in 1 teaspoon of salt. On average, people in the US consume 3,400 mg of sodium per day, about 50% more than the recommended amount.

The amount of sodium you need per day varies based on your age: 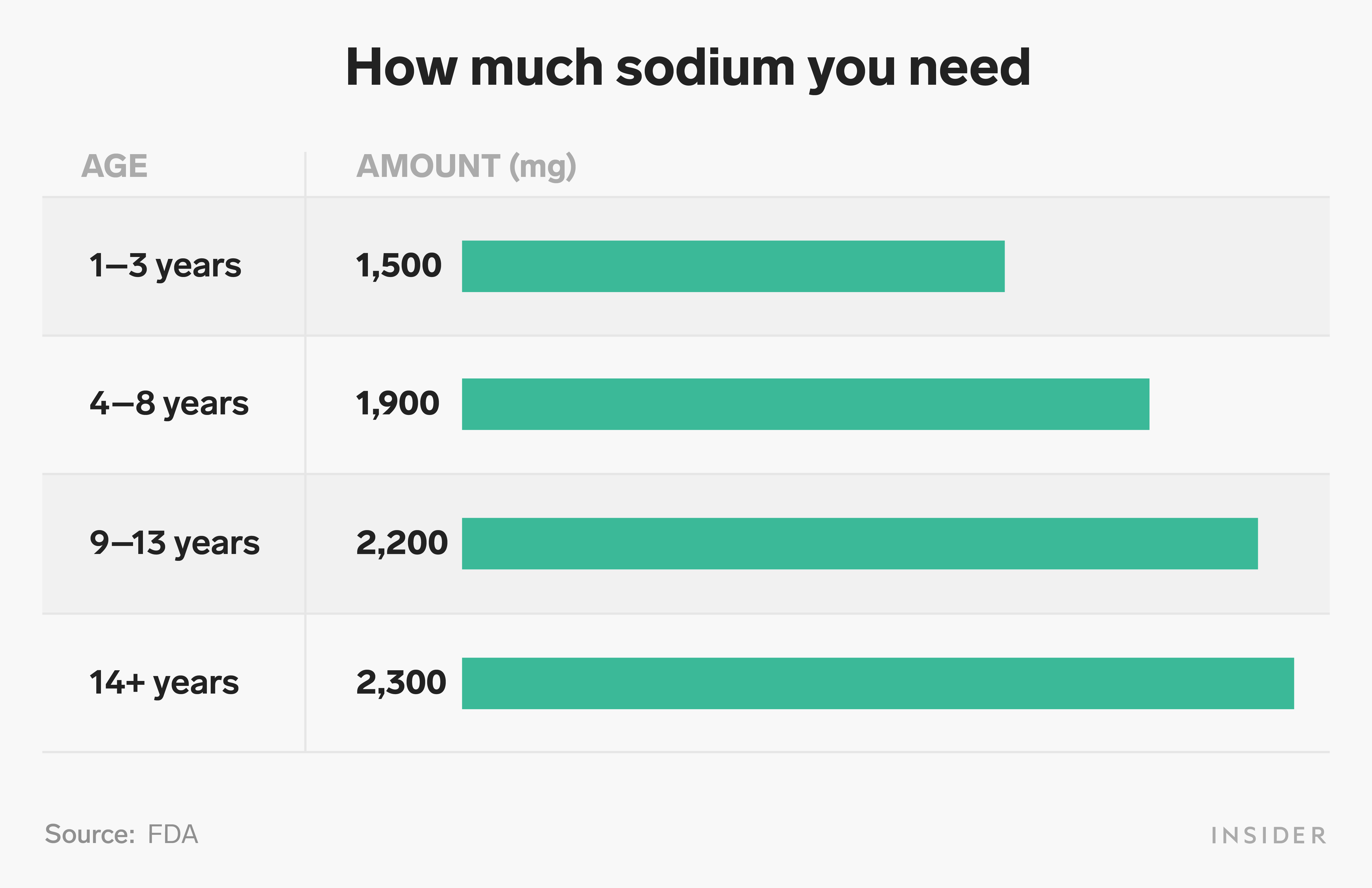 Lowering your sodium intake largely involves tracking what foods you’re eating. Here are some tips for how to go about that in a safe, healthy way:

“Try some of the diet-tracking apps or write down your foods, amounts, and sodium levels to get an idea of your daily consumption,” Garden-Robinson says.

Some free apps you can try include MyFitnessPal, Shopwell, and Calorie Counter & Food Diary.

If you don’t have access to the nutrition facts of your meal, you can avoid excess sodium by following the acronym SCIP, which stands for smoked, cured, instant, and processed. Foods prepared using these processes tend to have much more sodium â€” for example, a cup of smoked salmon has 1,066 mg of sodium, whereas plain raw salmon only has 117 mg.

So, when in doubt, skip the SCIP foods.

2. Opt for “low in sodium” or “reduced sodium” products

There are plenty of low-sodium and sodium-free options out there, like low-sodium soy sauce and unsalted nuts. But labels can be slightly confusing since there are so many options including low-sodium, reduced sodium, and very-low sodium. And each label refers to a different amount of sodium.

For example, low sodium means the product has 140 mg of sodium, or less, per serving whereas sodium-free foods contain 5 mg of sodium per serving. Here’s a table to help you navigate various low-sodium labels:

If you aren’t sure whether a food is high in sodium, read nutrition facts labels and note the milligrams of sodium per serving and the per cent daily value.

There’s more sodium in processed or pre-prepared foods than you may think.

“We may think that salting food at the table is the issue; however, processed foods make up the bulk of sodium we consume,” says Julie Garden-Robinson, PhD, a registered dietitian and professor at North Dakota State University.

A healthy alternative that can help you lower your sodium intake is to prepare your meals yourself with fresh, unsalted, or low-sodium ingredients. This gives you the most control over how much sodium is in your food.

So instead of buying that frozen burrito, consider replacing it with a freshly-made burrito consisting of:

Limiting your sodium intake is important, as this can help lower your risk for serious medical conditions, including:

“When we eat too much sodium, our body retains more water to maintain the proper fluid balance,” Garden-Robinson says. This increased water retention can result in swelling of your abdomen, arms, or legs, which can be painful and make it harder to walk. Water retention can also decrease your blood circulation and cause stiffness in your arteries, which are both risk factors for blood clots and heart disease.

A 2014 report from the New England Journal of Medicine that looked at over 100 studies in 66 countries found that the average sodium intake was 4,000 mg a day â€” 1,700 mg over the recommended daily intake. The researchers analysed health data and estimated that reducing sodium intake to recommended levels would prevent about 10% of deaths related to cardiovascular disease.

Many Americans are getting too much sodium through their diet, which can have serious, long-term health consequences. However, there are strategies you can use to lower your sodium intake and stay healthy. If you are worried that you may be getting too much sodium, try tracking your diet and contact your doctor or a nutritionist for an evaluation.