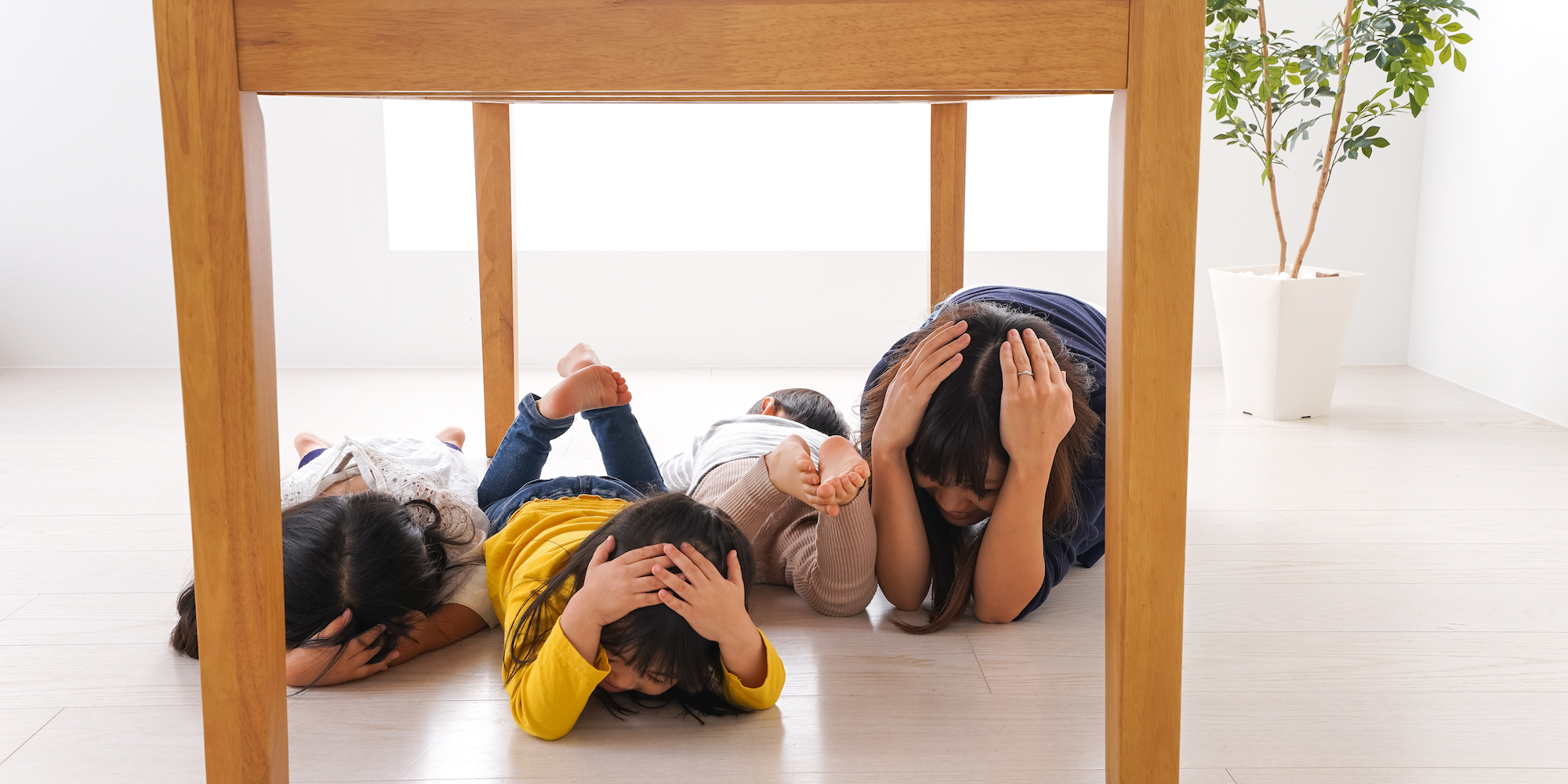 The morning after Salt Lake City went on coronavirus lockdown, Joe Dougherty was warring with his snooze button when he felt his house start to shake.

At first, he thought it was the wind. But as the trembling grew stronger, his wife sat up beside him and said, “Is this the earthquake?”

Dougherty, a spokesman for the Utah Division of Emergency Management, was well aware of predictions that SLC was due for a moderate-to-severe earthquake. So his family was fairly well-prepared for the magnitude-5.7 quake that rolled the city on March 18, the state’s biggest in nearly three decades. His department had also planned – and drilled – for this moment for years.

But no one considered the quake would hit in the middle of a pandemic. George Frey/Getty ImagesA security guard scans damage caused by an earthquake that rocked downtown Salt Lake City on March 18, 2020, less than a day after the city was put on coronavirus lockdown.

Residents on lockdown were unsure about leaving damaged homes and offices. Businesses that would normally direct workers to a designated evacuation site couldn’t account for employees working remotely. And official emergency websites relaying information about the pandemic became overloaded as visitors sought updates on the quake.

In the coming months, the US will enter hurricane and wildfire season

Thankfully, serious injuries were avoided, though thousands in Utah lost power and property damage is estimated to be in the millions. Experts agree that we should expect more two-pronged crises, especially as the US enters hurricane and wildfire season.

“We sort of pretend like disasters only happen” one at a time, James Kendra, director of the University of Delaware Disaster Research Centre, told Insider. “The fact of the matter is many of us live in hazardous locations, and we do have to prepare for these kinds of things.”

Two weeks after the Utah disaster, a magnitude-6.5 earthquake hit near Boise, Idaho, rattling an area hospital and other buildings.

Emergency teams do consider how different disasters can interact, Kendra told Insider – a hurricane might lead to flooding, or an earthquake could trigger a tsunami. But he said dealing with concurrent, unrelated disasters “makes emergency management an art, as well as a science.”

When homes are damaged, residents are often housed in schools or churches. But those buildings are now closed due to state and local lockdowns. Medical care and supplies are harder to come by, as hospitals scramble to treat critical COVID-19 patients. And first responders can be hampered by the necessity of maintaining social distancing. 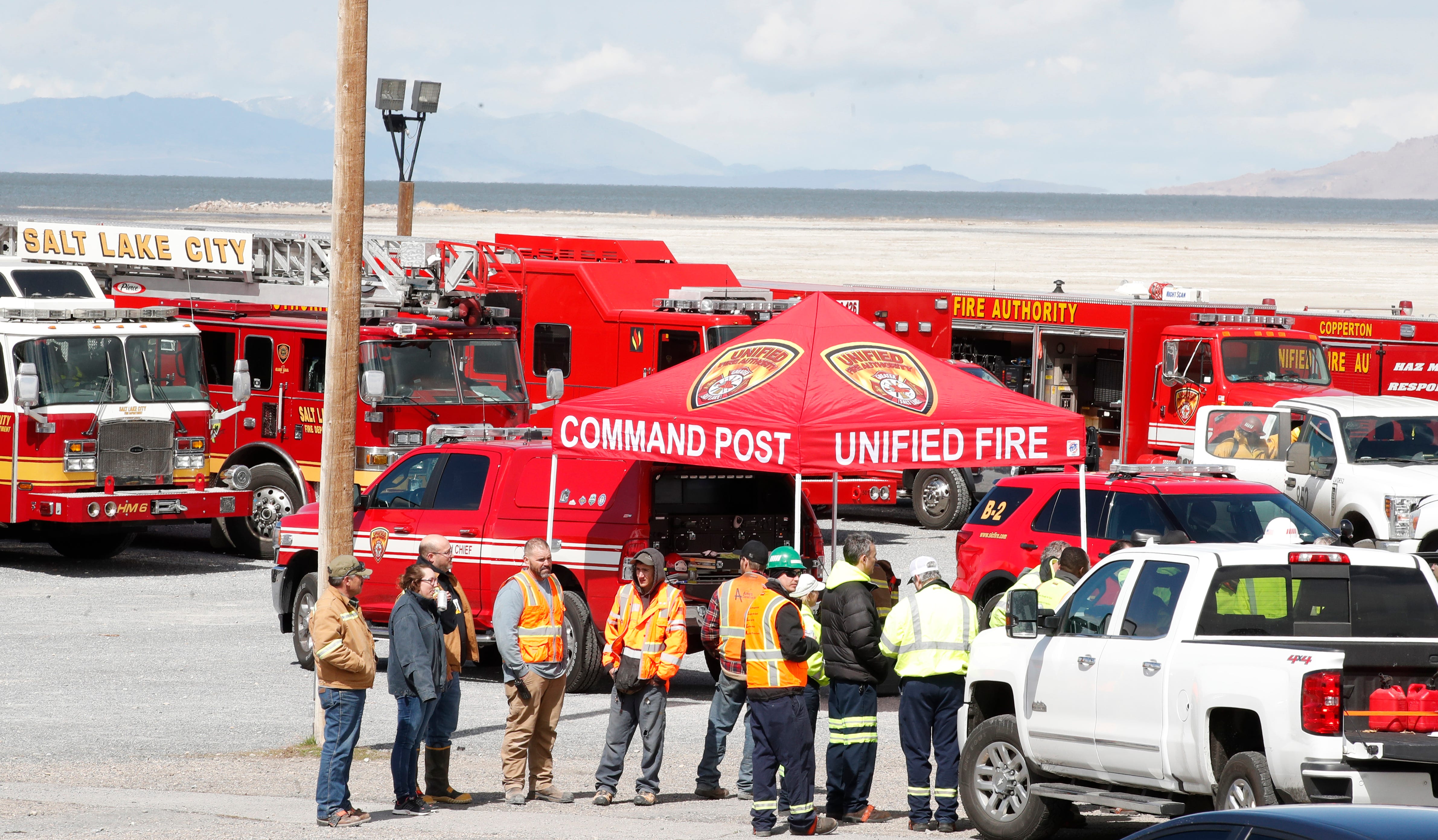 George Frey/Getty ImagesFirefighters and other emergency responders gather at Kennecott mining company in Magna, Utah. where an earthquake on March 18, 2020, sparked a chemical leak.

The earthquake made officials in Utah reevaluate their emergency response plans.

“Right now we’re establishing something called an ‘alternate care site,'” Dougherty said. “We’ve done that on paper, but now we’re actually looking at how quickly we can get that set up with a contract, location, and supplies.”

Disaster relief groups nationwide are adapting to the new reality: The Federal Emergency Management Agency has updated its policies to allow states to house people displaced by disasters in hotel rooms, according to The New York Times. And emergency shelters across the country are instituting temperature checks and handwashing stations, even as they try to space cots six feet apart.

How to prepare your home for an emergency during isolation

There is a lot that individuals can do, as well, to put themselves in a better position should catastrophe strike during the pandemic.

Janice Witherspoon, of the Idaho Office of Emergency Management, said a good rule of thumb is to keep two weeks’ worth of non-perishable food and other essentials, such as medications and toiletries, in an accessible location. She also recommends storing 14 gallons of water per household member.

Stocking up on essentials can be difficult right now, so Witherspoon encourages families to focus on less tangible aspects of their disaster plan – like staging fire or earthquake drills. Kids can research which natural disasters frequently occur in their area as a home-school assignment. (State and local emergency management websites are a good starting point.)

Staying in touch with loved ones is also important, Kendra said. “A lot of studies show that social isolation is connected to poor outcomes in a disaster, so be vigilant of parents, friends, and elders, who tend to be isolated.”

Ensure contact information for friends and family members is readily available. Have a hard copy somewhere, in case your phone is lost or power goes out.

While you’re pulling that together, gather medical records and important documents, too. Place them somewhere safe but easy to access in case you need to leave in a hurry. And keep the number for the national Disaster Distress Hotline (800-985-5990) handy.

How to prepare your business for a natural disaster

Business owners may not need to stock up on food or water – although they might if employees have to shelter-in-place at the office – but they do have to consider their staff members’ safety.

They also have to think about their company’s future: According to FEMA, 40% of businesses that close during a disaster never reopen. “We need to make businesses more resilient,” Dougherty said. He recommended creating a phone tree or email list to send group messages about emergency situations and next steps.

He also suggested backing up important data and records, in case they’re damaged or inaccessible, and considering how any number of emergencies could impact your supply chains.

Keeping calm is an essential step

Anxiety itself can become a major problem during an emergency: Dougherty said Utah Emergency Management still gets reports of people feeling phantom tremors weeks after the aftershocks subsided.

He believes working on emergency prep, even in isolation, can offer a sense of control. “The best way to make preparedness become part of your life is to build a regular habit,” he said.

But trying to plan for everything at once is overwhelming, especially when we’re all already on edge. So he recommends addressing disaster preparedness one step at a time.

“When I’ve dealt with anxiety, it continues because there is no resolution,” he added. “Those little steps bring a lot of security.”