I turned carrots into 'bacon' using a popular TikTok hack, and they were delicious 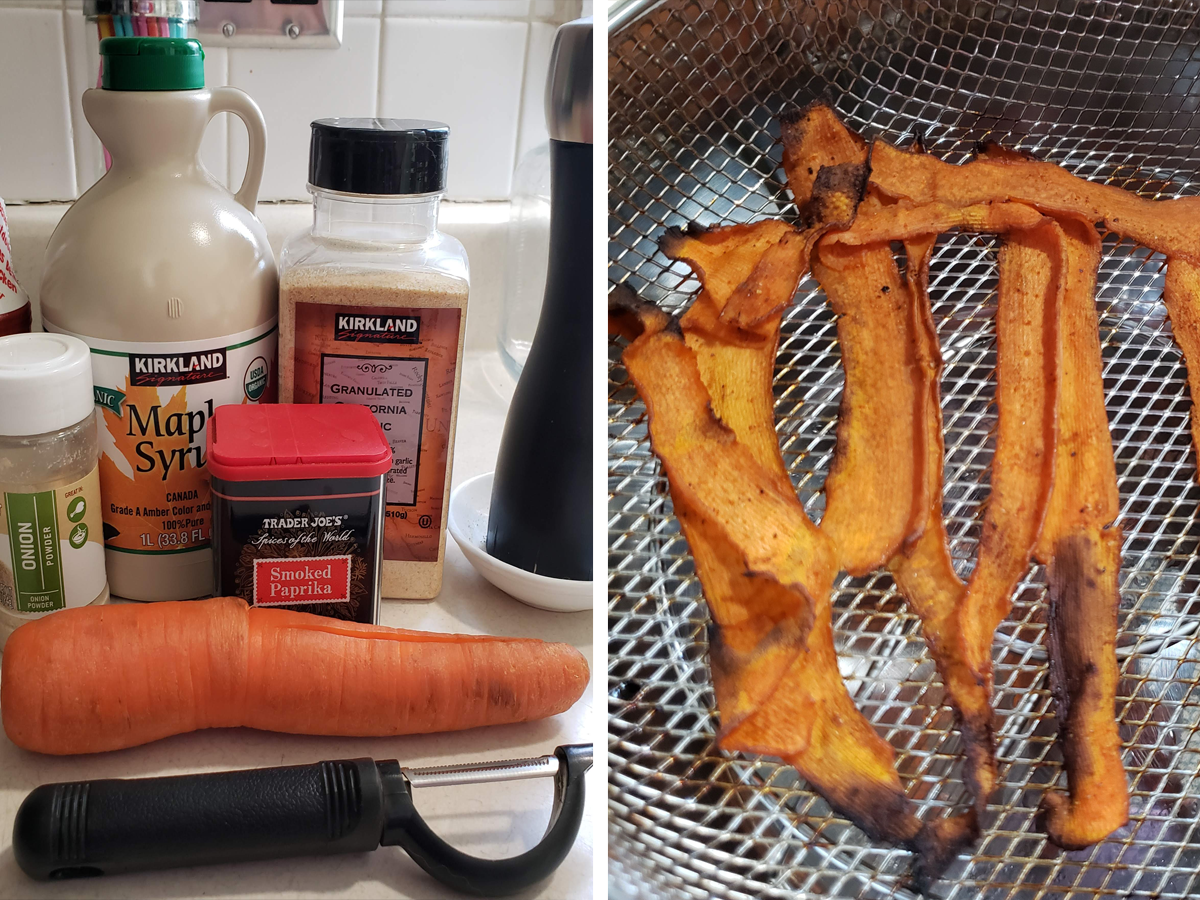 Janaki Jitchotvisut for InsiderWith a few ingredients, this recipe can help you turn carrots into a dupe for bacon.

Bacon lovers who want to add more vegetables into their diet are in for a treat.

Earlier this month, TikTok user Tabitha Brown (@iamtabithabrown) shared a short video demonstrating how to make tasty “bacon” out of a vegetable in minutes.

In the video, which now has over 12.5 million views, Brown used carrots, a peeler, and just a few ingredients.

It looked pretty easy, so I decided to give it a try. Here’s how it went turning carrots into “bacon.”

I had everything I needed in my pantry, so I gathered my ingredients and watched the TikTok a few more times to prepare. Janaki Jitchotvisut for InsiderTo make carrot bacon, I only needed a few ingredients.

As a trained culinary professional who has worked in a kitchen for years, this recipe was a little bit familiar to me.

It’s not clear where the idea of carrot “bacon” originally came from, especially because vegan recipes have long used similar marinades to get all kinds of foods (such as rice paper) to get that umami, meaty taste.

For this particular recipe, all I needed was a carrot, a vegetable peeler, liquid smoke, maple syrup, onion powder, garlic powder, smoked paprika, and pepper.

Those are all things I regularly have on hand since I like to cook, so after a few minutes of gathering my ingredients and tools, I was good to go.

First, I put all the dry ingredients in the container I was using for my marinade. Janaki Jitchotvisut for InsiderIt’s best to use a flat container when making a marinade.

Although Brown used a bowl in her TikTok, I used a rectangular dish to marinate my carrot slices.

A bowl has sloped sides, so the carrots down in the middle are going to get more marinade than the ones going up the sides of the bowl. A flat surface gives more of your carrot slices a chance to soak up all of the flavours.

Brown didn’t give exact measurements in her video, so I eyeballed it based on her video.

Next, I added the wet ingredients and mixed it all together with my pastry brush. Janaki Jitchotvisut for InsiderUsing this brush meant one less utensil to wash.

I’m used to mixing marinades with a whisk or fork, but Brown used a pastry brush so I did, too.

This method was great because it mixed up the marinade well, and it also meant one less dirty utensil for me to wash because I later used the brush to put the marinade on my carrot slices.

Then, I added my carrot slices to the marinade and mixed them around. Janaki Jitchotvisut for InsiderI marinated a few slices at a time.

Before making my marinade, I had cut my carrots into thin slices using a vegetable peeler down the length of the carrot, just as Brown had done.

I decided to just marinate a few strips at a time because if you crowd them in the dish they won’t be as flavorful as they would be if you only soak a few at once.

After coating each slice with the marinade, then left the carrots to soak for a few minutes. Janaki Jitchotvisut for InsiderI used the brush to coat them thoroughly.

Marinades are great for flavour, but only if you cover the whole surface of whatever you’re marinating and let it soak for a little bit.

Brown suggested soaking the carrot “bacon” for just a few minutes, so that’s what I did.

Next, it was time to cook the strips. Janaki Jitchotvisut for InsiderI used a multi-cooker with an air fryer attachment.

I don’t have a dedicated air fryer, which is what Brown used, but I have an air fryer lid and basket for my multi-cooker, so I used those.

She said you can also use an oven, but that would take a while to preheat and I didn’t want to wait.

According to Brown, you should cook your carrot “bacon” at 380 degrees Fahrenheit for five minutes for crispy, crunchy results. Janaki Jitchotvisut for InsiderI didn’t use any oil or other fat in the basket.

The carrot slices already smelled pretty good from the marinade, so I may have been a little overexcited as I gently placed them in the air fryer basket.

I crowded them a little bit, which you should avoid if you like your “bacon” crispy. If I make this again, I’ll space them out a little better.

I kept a close eye on my carrots as they cooked. Janaki Jitchotvisut for InsiderFortunately, my cooker has a clear lid.

One of the cool things about this cooker is the clear lid, so I was able to watch the carrots as they fried.

My multi-cooker only allows temperature adjustments in 25-degree increments, so I was cooking at 375 degrees Fahrenheit instead of 380. However, I figured I would be OK if I just left them in for a minute or two longer than Brown had originally recommended.

I checked the carrot “bacon” at 5 minutes, per the original recipe. Janaki Jitchotvisut for InsiderI ended up giving them more time since they didn’t look crunchy enough to me.

After five minutes, which Brown recommended in her TikTok, the carrots had only started to brown slightly. You can see in this photo that they still look rather moist, not crunchy and crispy.

I don’t like cinders, but I don’t like soft bacon, either – so, as anticipated, I set the timer for another two minutes.

Those extra two minutes did the trick. The strips smelled amazing, and didn’t look half bad, either. I could tell just from looking at them that they were going to have a nice crunch.

The strips were extremely tasty, and the crispy texture was great. 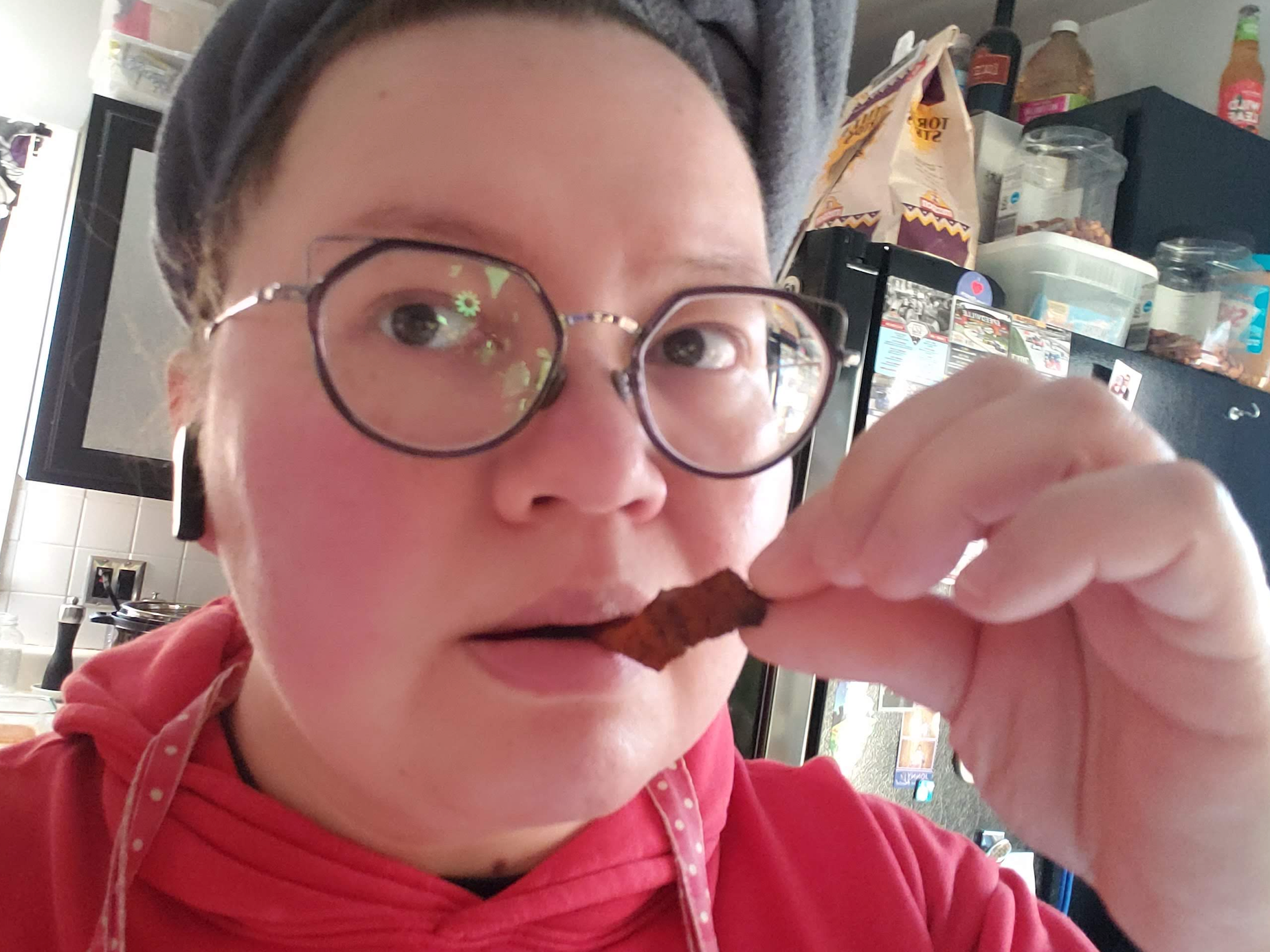 Janaki Jitchotvisut for InsiderThe strips didn’t taste like bacon, but they were tasty.

I wouldn’t say these carrot strips tasted like bacon, but I think they stand alone as a great crunchy, crispy snack and I’d totally make them again.

To be totally clear, I love vegetables, but I know plenty of cooks who have to hide them to get picky family members to eat them. This could be a great way to do it, but these strips are also just a tasty, relatively healthy snack you could make for just sitting around and watching Netflix.

Overall, if you’re expecting these to taste and feel just like bacon you might be disappointed. But if you’re looking for a tasty snack that’s not too bad for you, I think these are a great choice.