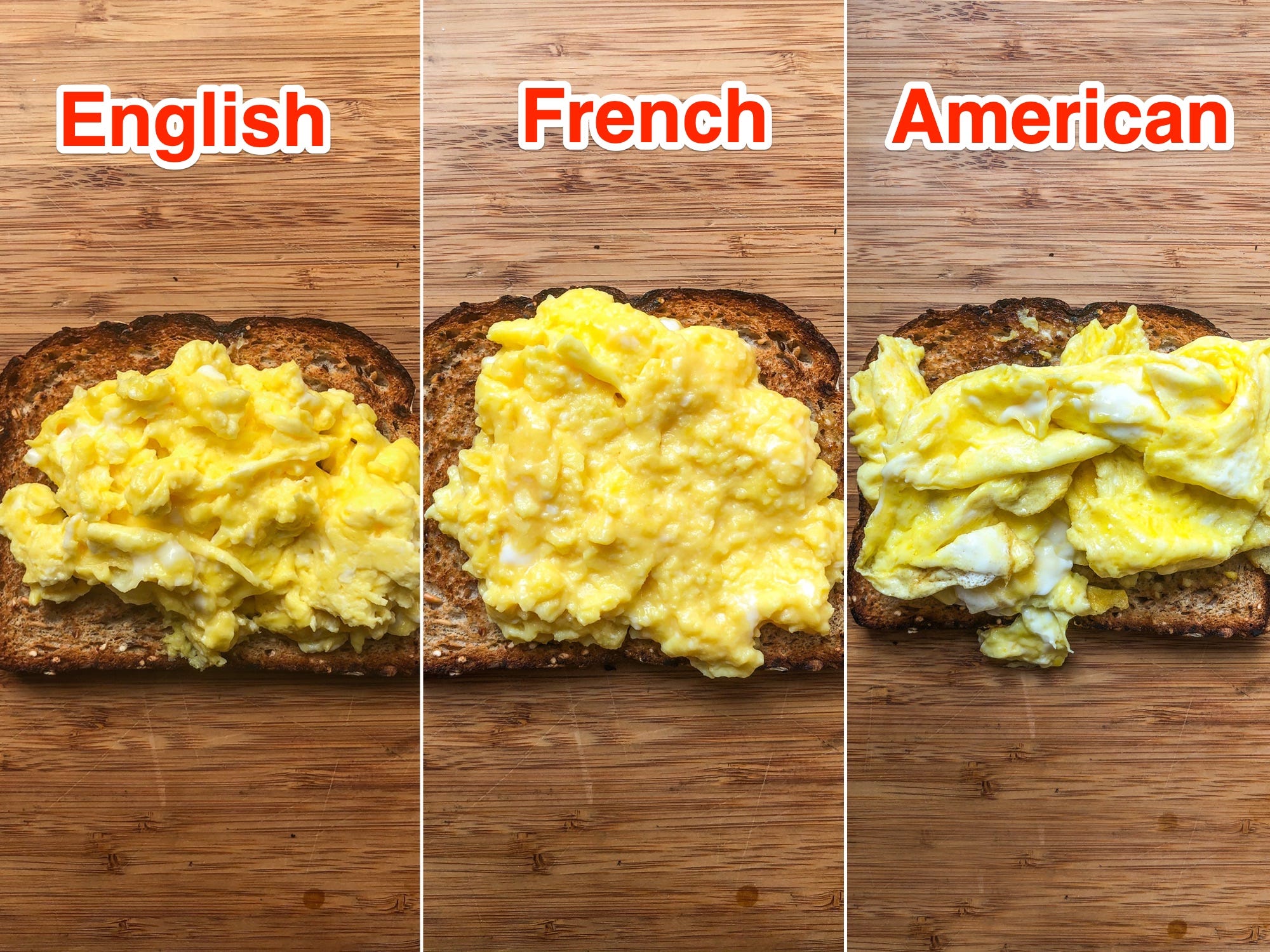 On my quest to find the best way to cook scrambled eggs, I found a video from the celebrity chef Jamie Oliver outlining three techniques: English, French, and American.

Oliver used the exact same ingredients for each batch of scrambled eggs â€” two eggs per person, a pinch of salt, and a knob of butter â€” and explained how changing just the method used to cook them can alter their flavour.

After trying the different versions of scrambled eggs for myself, I see what he means. Following Oliver’s lead, I used two pots, one pan, one bowl, a whisk, and two spatulas to cook what he has dubbed English, French, and American scrambled eggs.

First, I followed Oliver’s instructions for his English scrambled eggs. 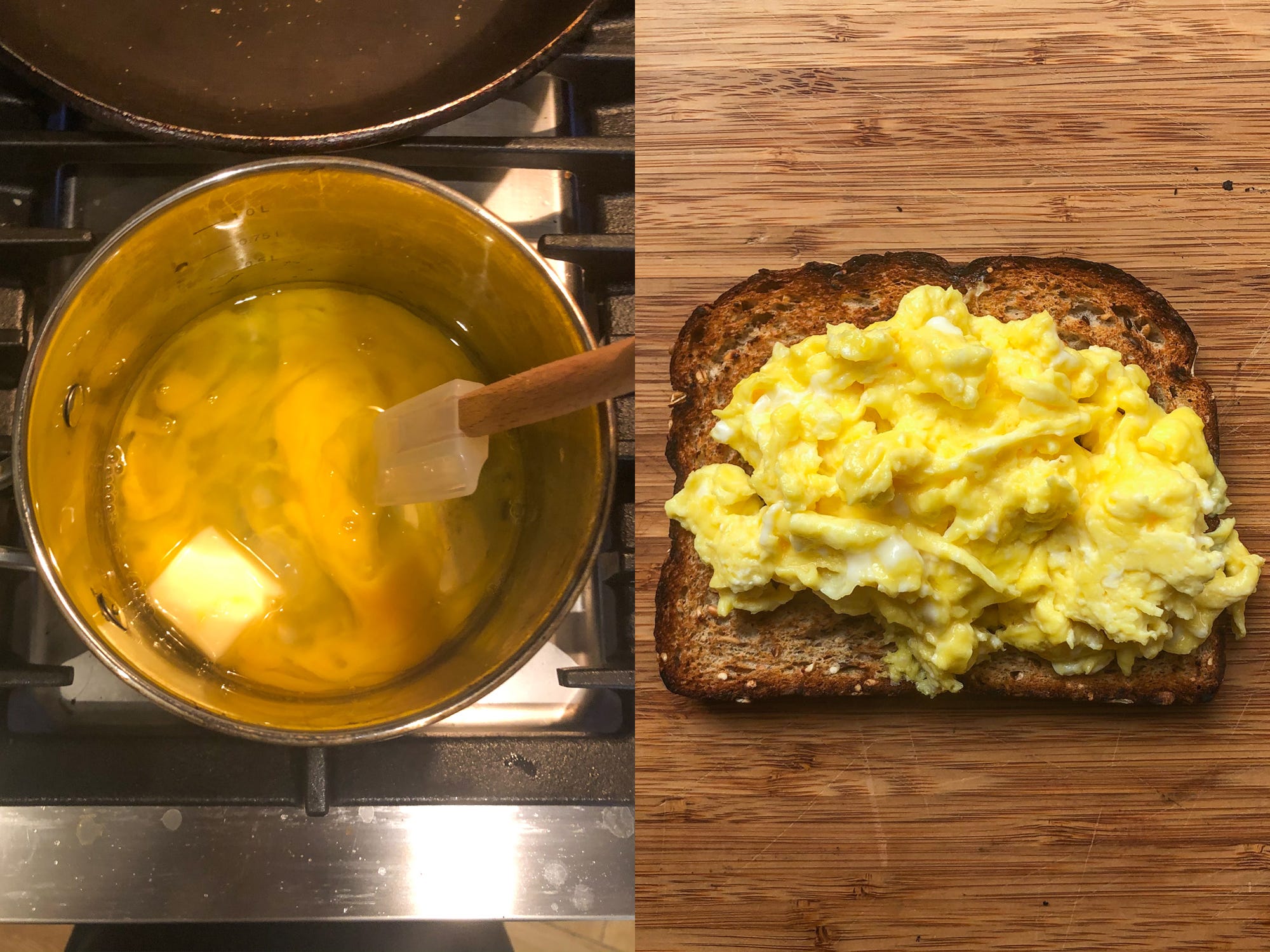 Rachel Askinasi/InsiderI made these in a pot with a spatula.

Oliver’s technique for English-style scrambled eggs started with beating eggs in a bowl, seasoning them with salt, and then pouring them into a preheated pan with melted butter over medium heat.

Imitating the chef, I used a spatula to move the eggs around in the pot. Oliver said he stirs the eggs every five seconds to keep them from clumping together.

These eggs cooked extremely quickly, and I found that it’s actually really easy to overcook them.

After about 50 seconds, I had a pile of finished eggs – though mine came out a bit less creamy-looking than Oliver’s did.

Taking a bite, I noticed they were moist near the top and drier on the bottom, probably a result of the eggs continuing to cook in their own heat even after I removed them from the pot. The flavour was bold and bright, and good enough that I’d make them again.

Next, I tackled what he dubbed the French method. 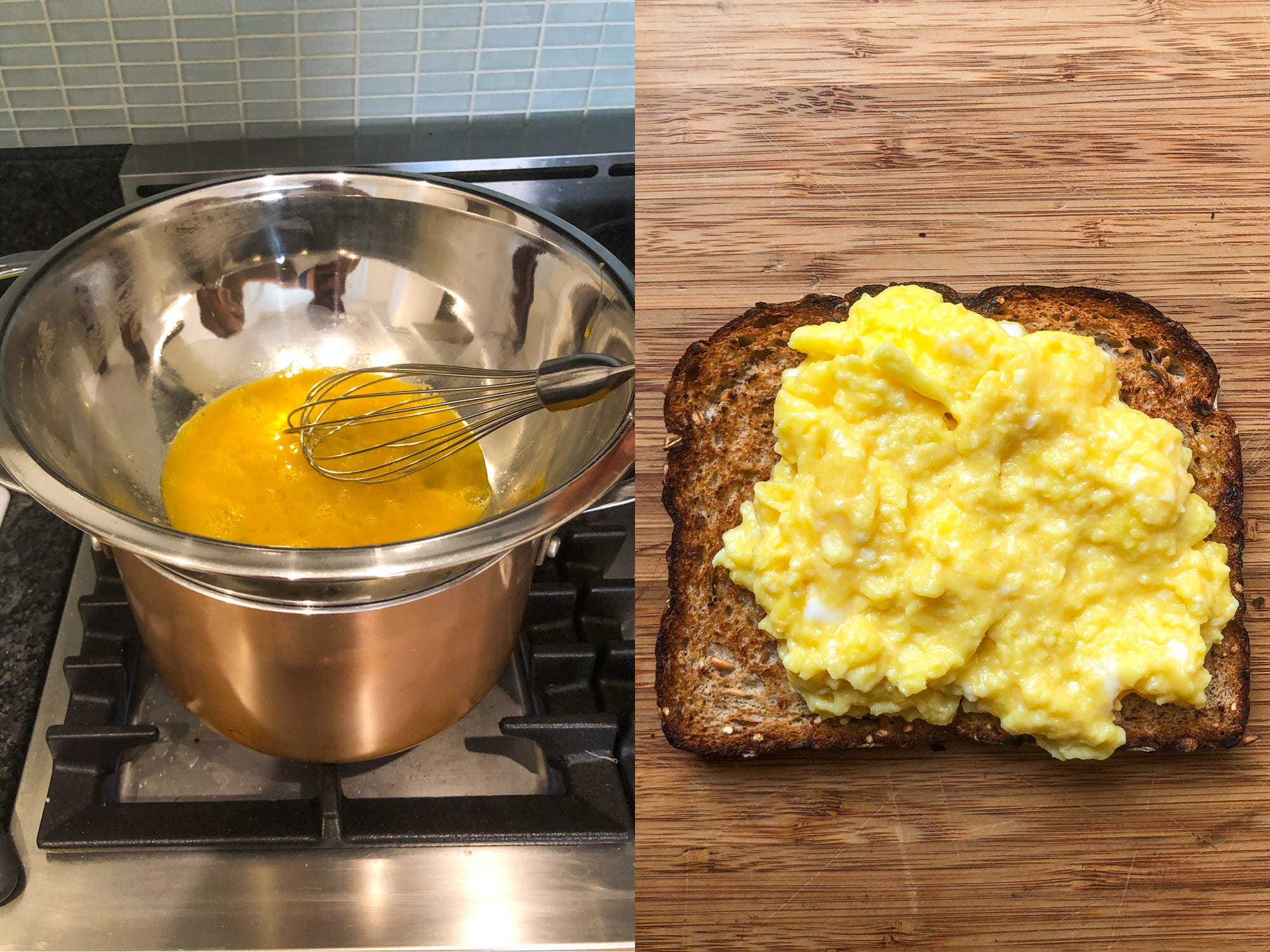 Rachel Askinasi/InsiderI used a whisk and a spatula to make these eggs.

The chef’s version of French scrambled eggs was labour-intensive and significantly more complicated than the other two methods he outlined in this video.

First, I had to set up a bain-marie, or a heated water bath. To do that, I filled a large pot with about 2 inches of water and brought it to a boil. Then I whisked my eggs and seasoned them in a bowl, which I then placed into the pot. Oliver used a glass bowl, but I only had a metal one to use.

Oliver said this would take a long time and a lot of on-and-off whisking, but mine took only a couple of minutes to come together. I think it took less time because I was using a metal bowl, which is better at conducting heat than glass.

The chef described these eggs as having a “luxurious” texture, but mine felt more wet than velvety. I’d imagine with more practice and the right bowl I could nail down the ideal texture.

These eggs were tasty though. I thought they had a rich flavour even though they felt a bit watered down.

Lastly, I mimicked Oliver’s technique for classic American “diner eggs,” as he called them. 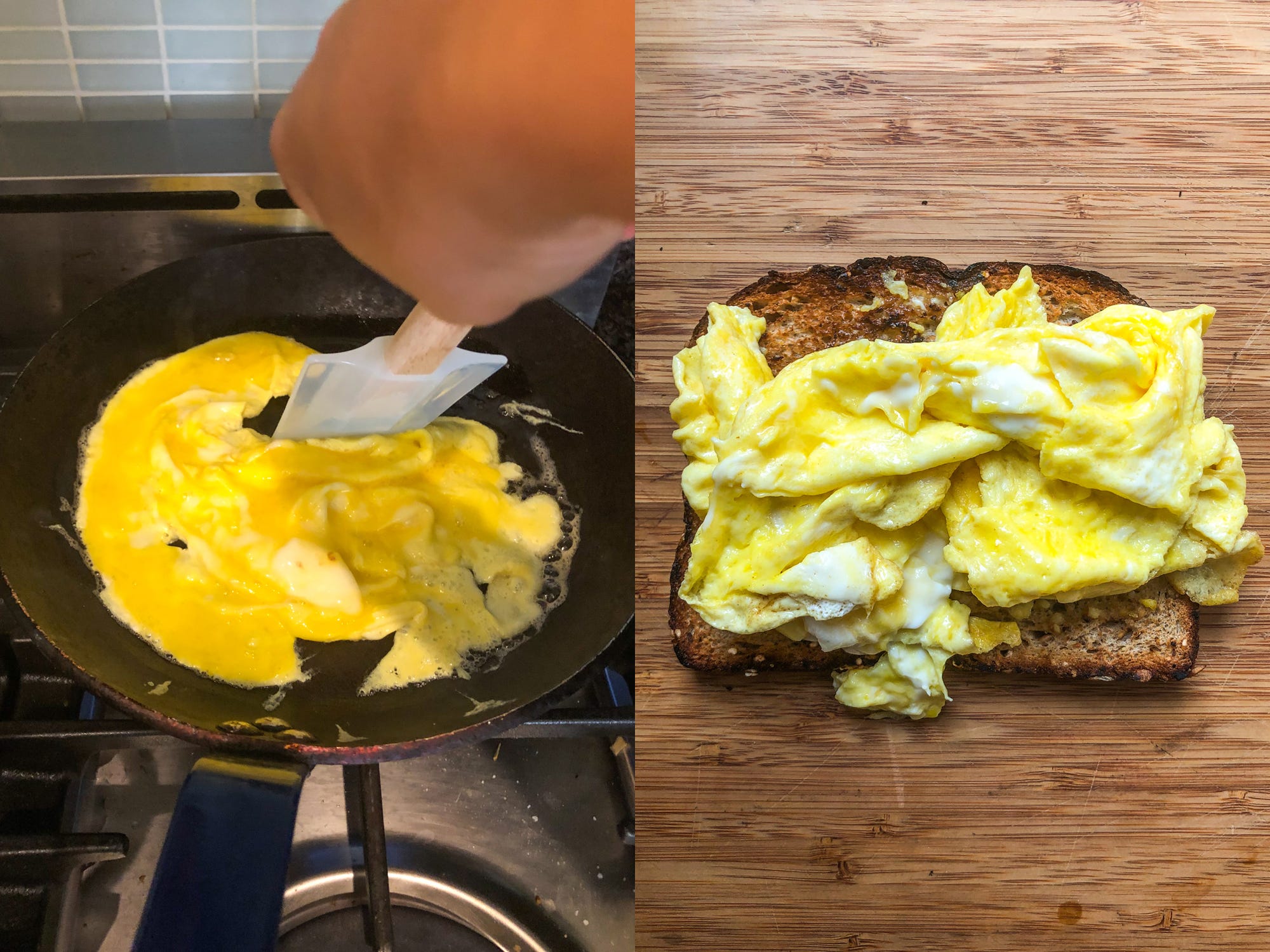 Rachel Askinasi/InsiderI made this batch of eggs in a pan.

These eggs, which I beat and seasoned in a bowl before pouring them into a buttered pan on medium heat, as per Oliver’s instructions, tasted overdone. The flavour had no depth or richness – which, yes, was more reminiscent of scrambled eggs I’ve eaten at a diner than what I’ve eaten at white-tablecloth restaurants.

While I was able to retain some of the moisture on the top of the eggs by using a spatula to pull the raw egg from the perimeter of the pan to the centre, most of it faded away to dryness.

Though it took only about one minute for these eggs to cook, they still took a little bit more time and attention than the English version – these went from raw-looking to fully cooked in seconds.

Different cooking methods can drastically change the flavours you get from the exact same ingredients. 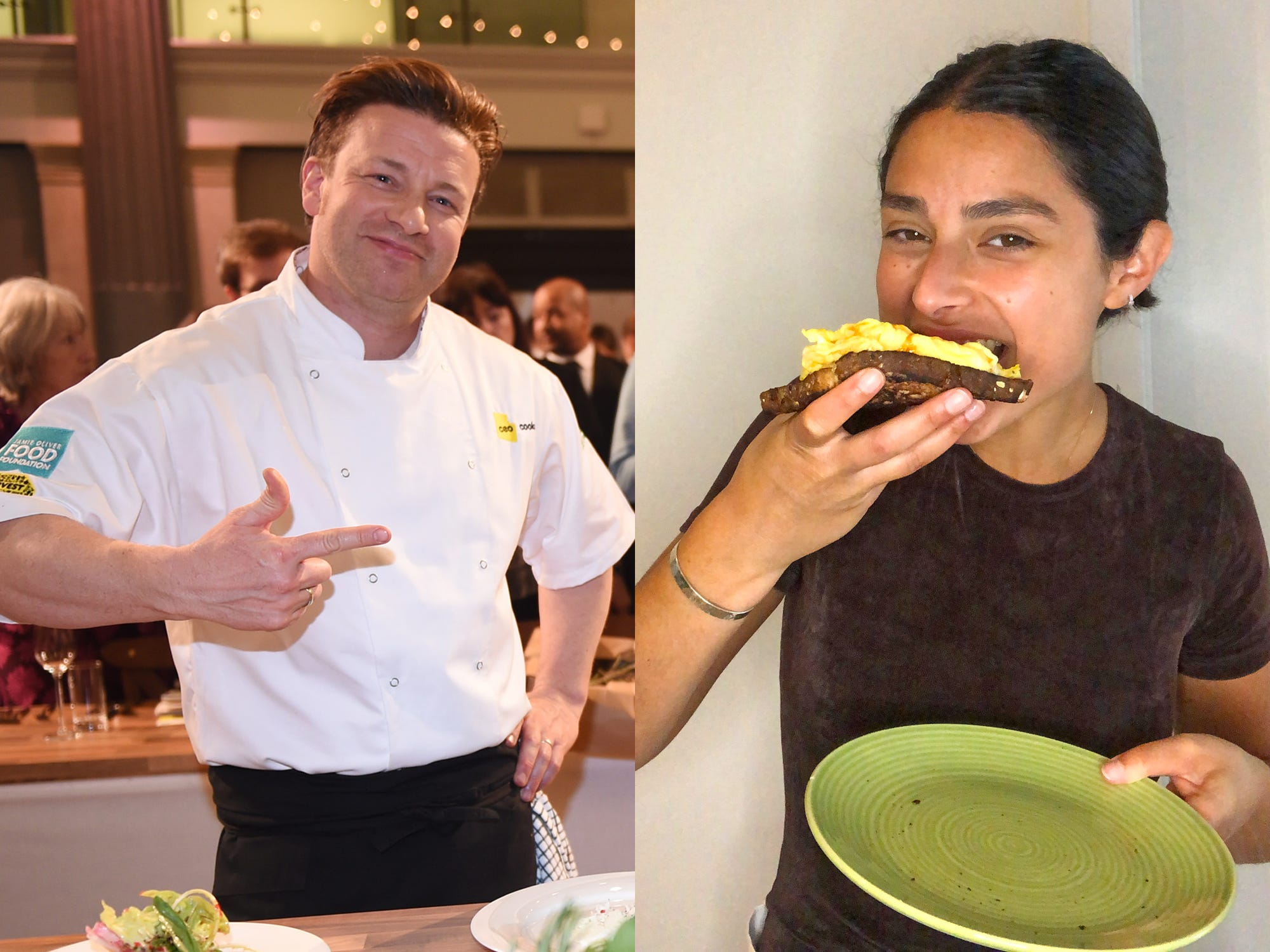 I don’t think I’ll ever stop being amazed at how different the same scrambled eggs can taste depending on whether you stir them in a pot or fold them in a pan.

The English method Oliver outlined is a good option for anyone who likes a fluffy but drier scrambled egg. (For a more velvety texture, I’d recommend adding and removing heat while stirring continuously, like the Michelin-starred chef Gordon Ramsay suggests.)

Oliver’s French-style eggs took a lot of work. I spent more time setting up the bain-marie than I did actually cooking the eggs, and I had the most pots and utensils to clean afterward. If you’re willing to dedicate the time to practicing this scrambled-egg method, you might feel like all the effort paid off – but unfortunately I didn’t feel that way.

If you love eggs that are fully cooked through, Oliver’s American style is likely for you. The eggs were easy to make and versatile. I didn’t find the flavour appealing, but I did think they were a pretty good homage to the American diner scrambled-egg experience the chef describes in his video.

If you try your hand at Oliver’s eggs at home, you might find that it requires some trial and error to get your scramble to look like the chef’s – as I did with the French-style eggs, not having the same cooking equipment – but ultimately you’ll find a method that suits you.