I tried Ina Garten's famous cosmopolitan, and now I understand why she makes it at 9 a.m. 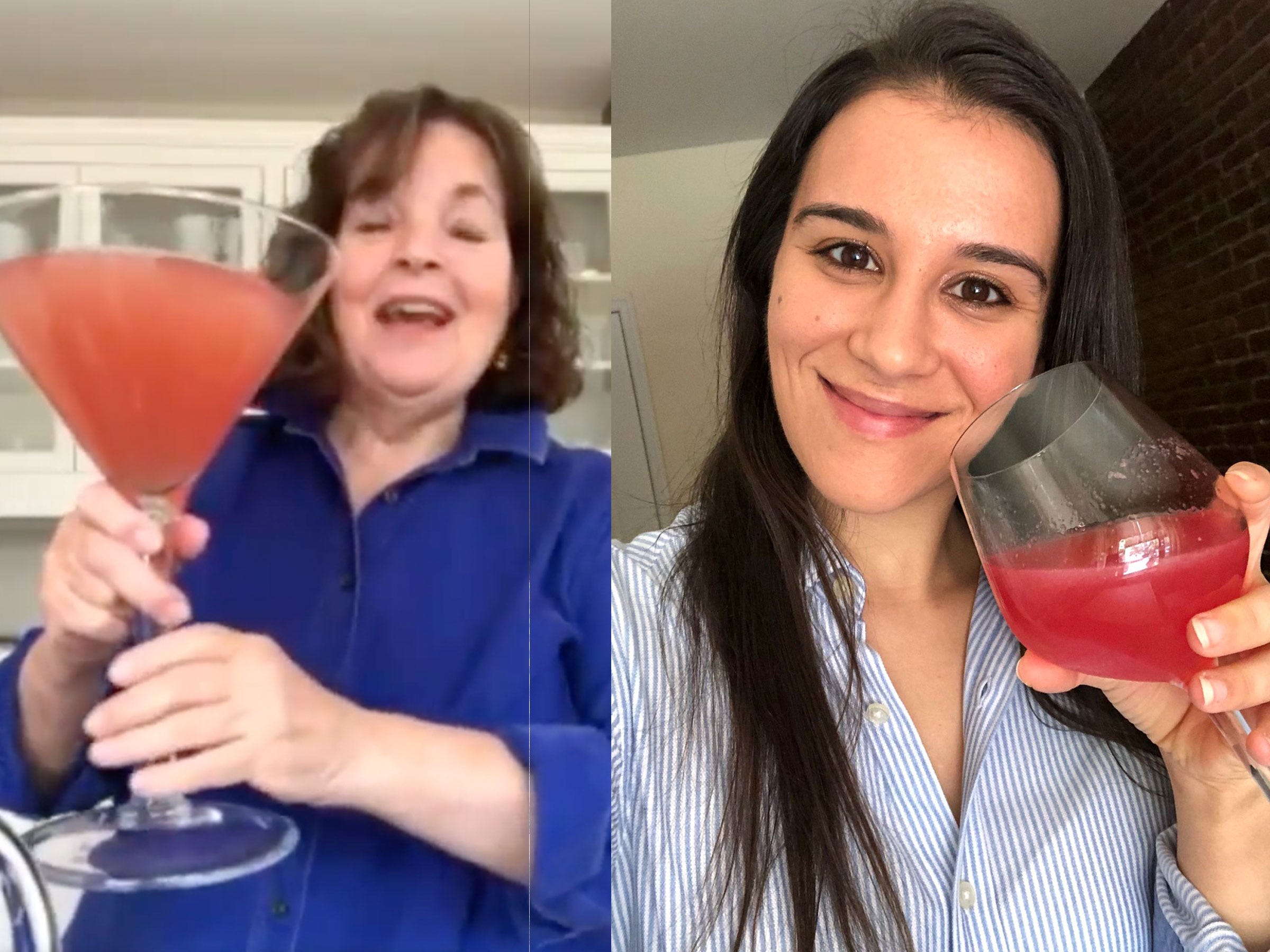 Ina Garten/Instagram/Anneta Konstantinides/InsiderI made Ina Garten’s favourite cosmo, and it was the best drink I’ve had in quarantine.

When it comes to making my own drinks at home, I’ve never been very creative.

In college it was bags of Franzia, or vodka chased with green apples. (I do not recommend.) My mid-20s featured plenty of Coronas, rum-and-Cokes, and the realisation that red wine really does taste better from a bottle. Now I’m mostly loyal to homemade mimosas or cans of White Claw.

As my friends and I near the big 3-0, I’ve watched many of them take a new interest in bartending at home. They’re investing in vintage bar carts, buying nice cocktail shakers, and hiding at least some of those kitschy shot glasses from study abroad. But I never really felt the same urge to expand my horizons.

That is, until Ina Garten came along, sipping a cosmopolitan from what appeared to be the world’s biggest martini glass at 9 a.m. in April. Garten’s famous Instagram video has been viewed more than 3.1 million times and turned her into a quarantine icon for many people, myself included.

I recently set out to live like the Barefoot Contessa for a day, whipping up everything from Emily Blunt’s roasted potatoes (which crashed Garten’s website) to some of the Food Network star’s most popular dishes. But it was the cosmo that I loved making the most.

My day as Ina Garten in lockdown began with a massive cosmopolitan at 9:30 a.m. 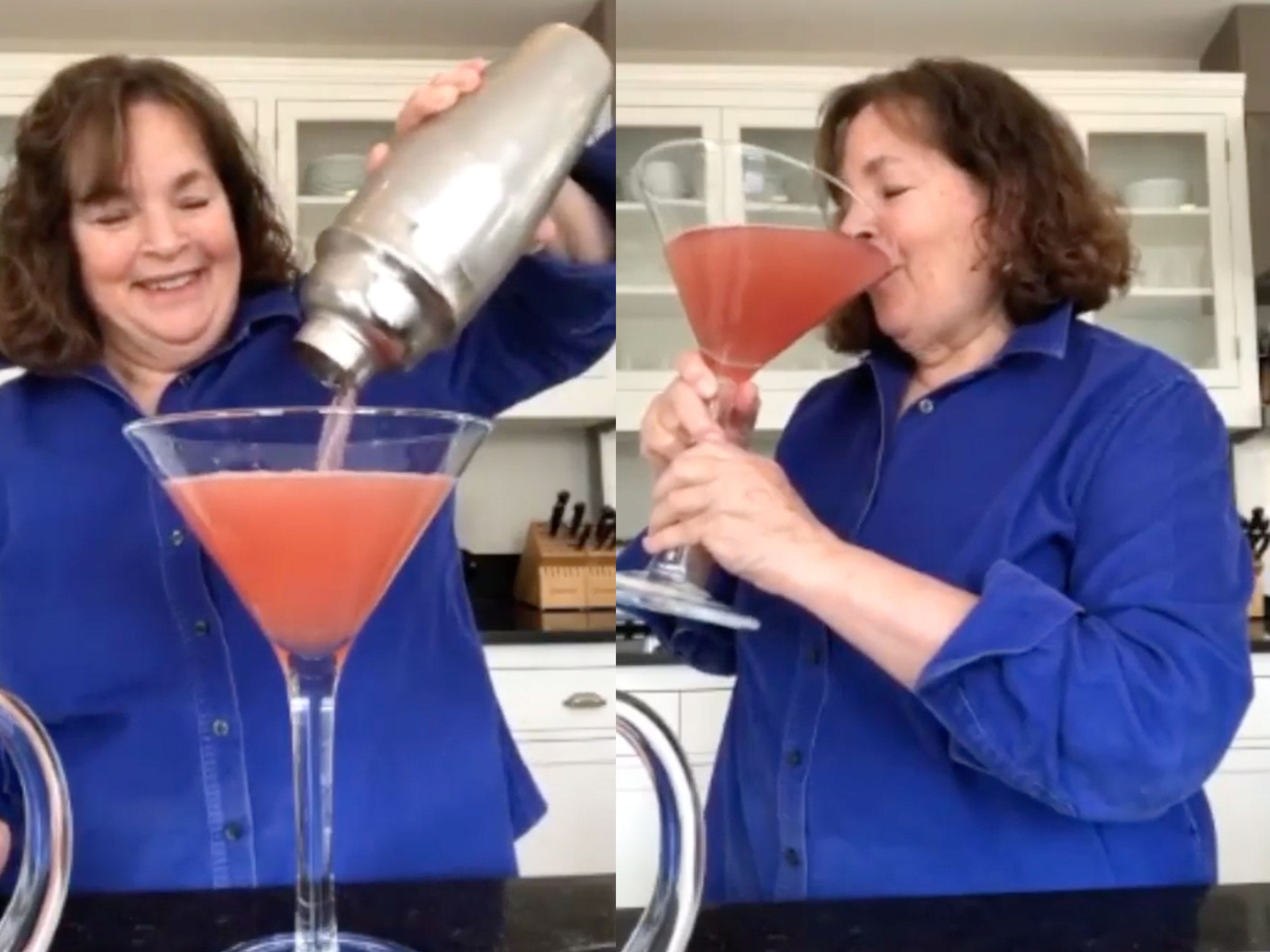 Ina Garten/InstagramGarten made herself a big batch of cosmos while in quarantine at 9 a.m.

Bright and early on April 1, Garten shared a video of herself whipping up a huge cosmopolitan, delighting her 2.7 million Instagram followers.

“It’s always cocktail hour in a crisis!” she wrote in the caption.

Garten began the cocktail lesson by telling her viewers that during these trying times it’s “really important to keep traditions alive.”

“My favourite tradition is cocktail hour,” she said with a knowing smile. “So I’m going to make you my favourite cosmopolitan, and you probably have all the ingredients right in your house.” 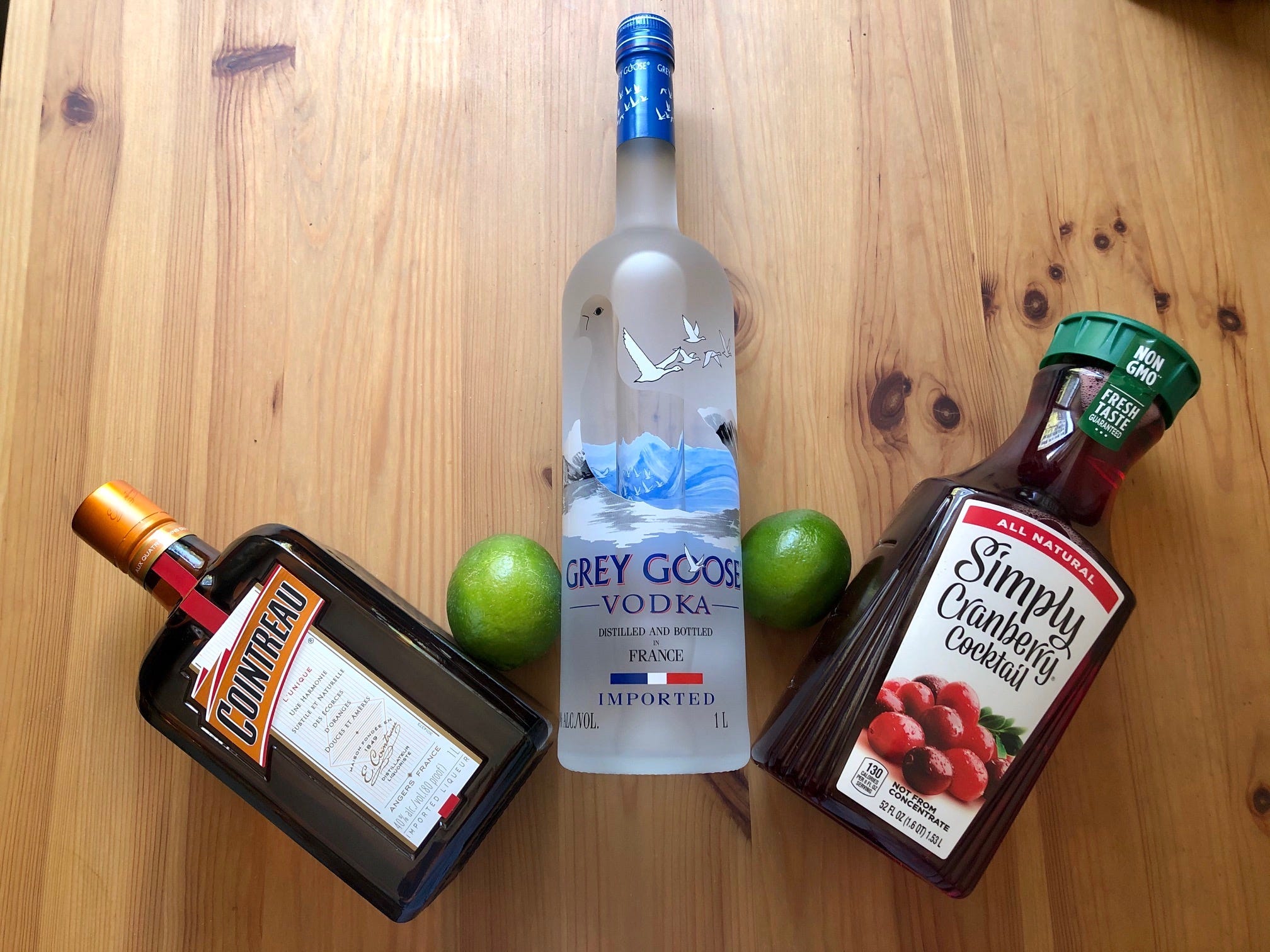 I have to admit, I didn’t actually have any of these ingredients in my apartment. I don’t think I’ve bought a bottle of vodka since my 21st birthday.

But I made an exception for the Barefoot Contessa and picked up exactly what Garten used in the video: Grey Goose (“good vodka,” as she says), Cointreau, limes, and some cranberry-juice cocktail.

Garten’s recipe calls for “freshly squeezed” lime juice, so I began my morning by attacking three poor limes with a fork. 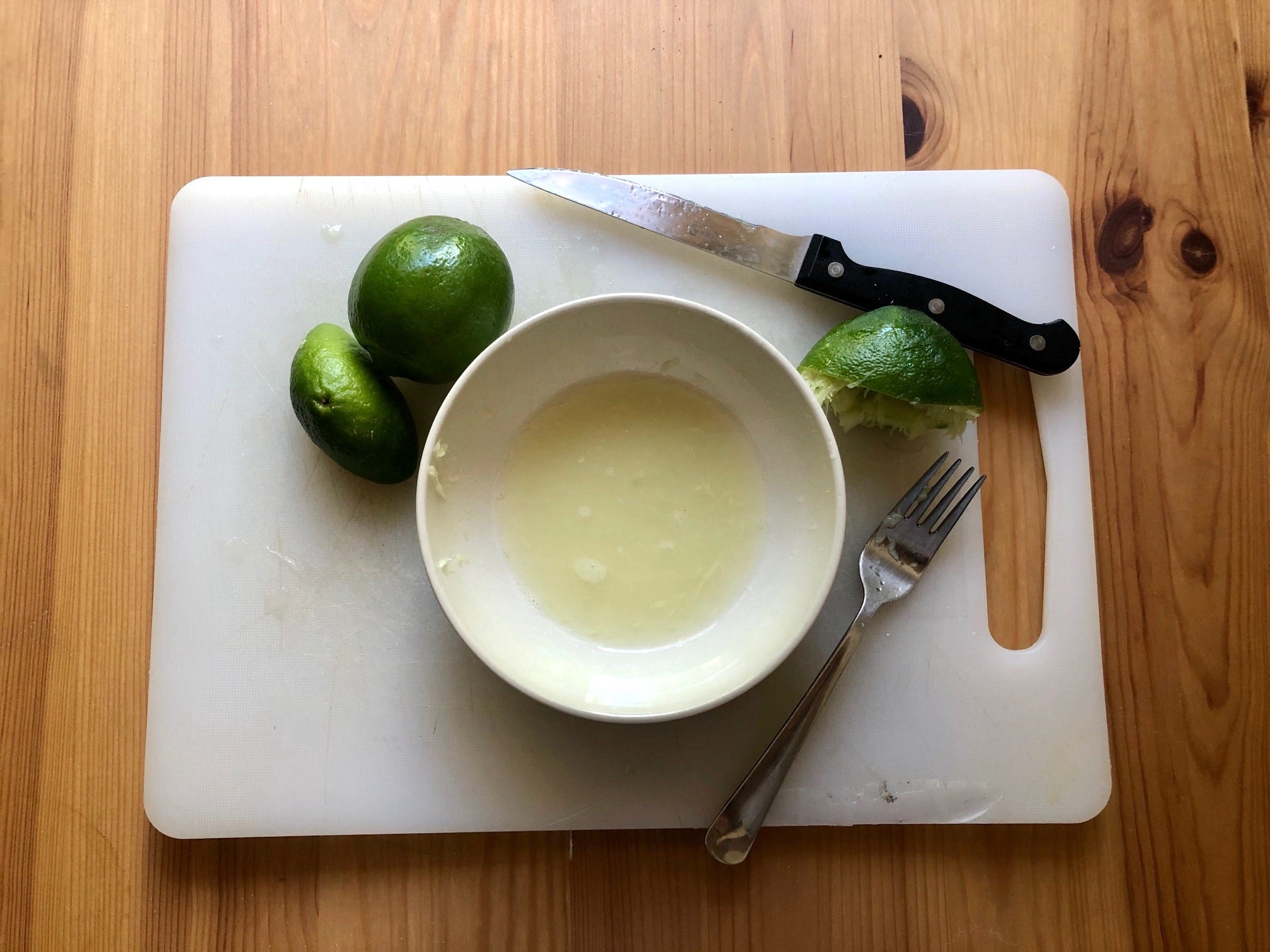 I don’t have a juicer of any sort in my tiny Manhattan kitchen, but I had Garten’s words for motivation as I gave my arms an early workout.

“It’s got to be freshly squeezed,” she told her Instagram followers. “Very important.”

Then I added 2 cups of vodka, 1 cup of Cointreau, 1 cup of cranberry-juice cocktail, and the freshly squeezed lime juice to a decanter. 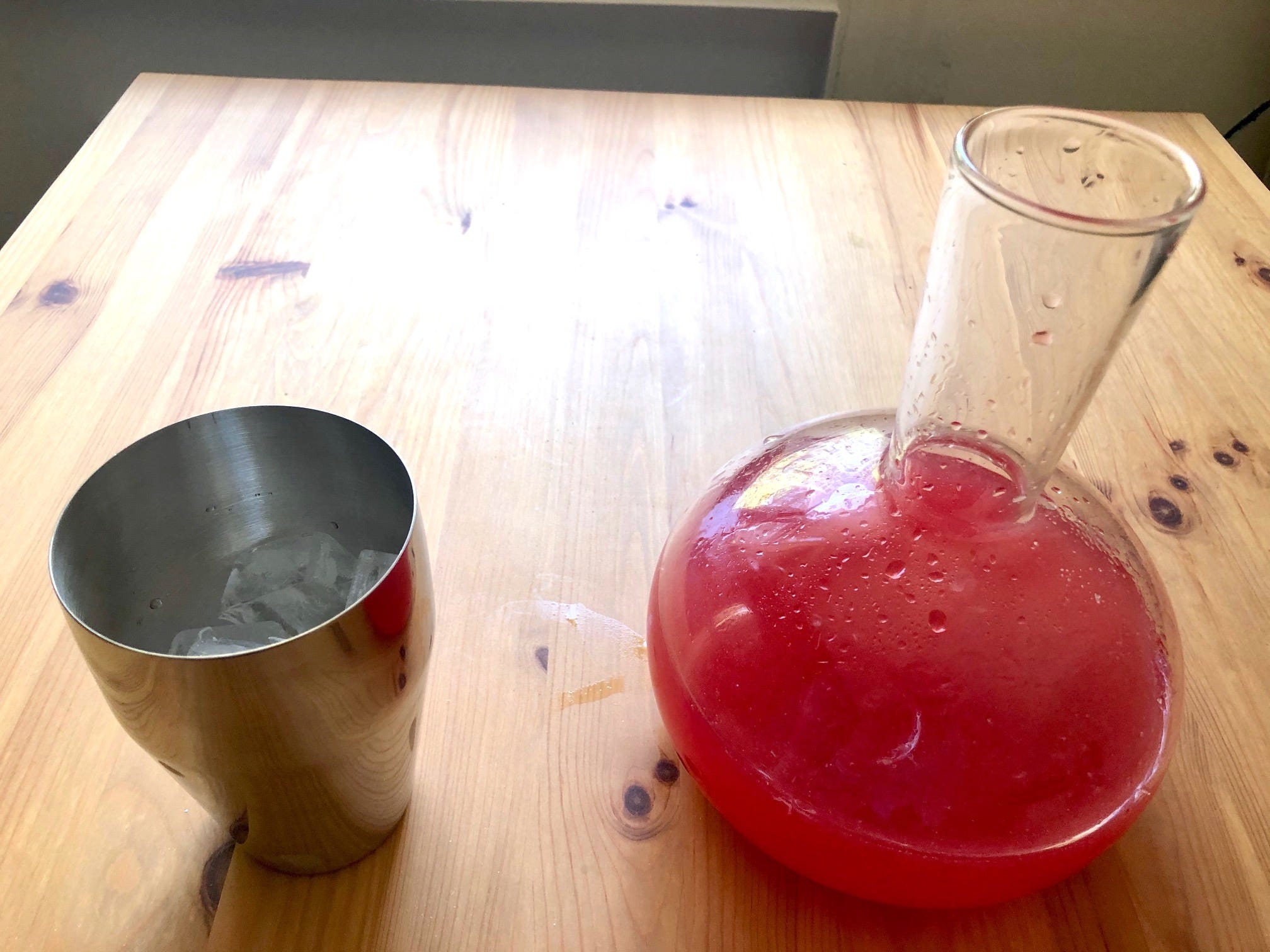 I also don’t own a pitcher, but Garten is all about making modifications in quarantine, and so am I!

The mixture was a gorgeous bright pink that reminded me of watermelon juice. I couldn’t wait to taste it, even with the vodka. I poured the cosmopolitan mixture into the cocktail shaker until it was three-fourths full and still had plenty left over.

While Garten’s recipe says it makes one drink – if you’re using a massive martini glass as she did – the “Barefoot Contessa” star cheekily notes that it also makes six “regular sized” drinks.

“I like to make a lot of cosmos,” she told her followers. “You never know who’s going to stop by. Wait a minute, no one’s stopping by!”

I had never made my own cocktail before (unless you count pouring rum into a bottle of Coke), so I was feeling pretty impressed with myself. 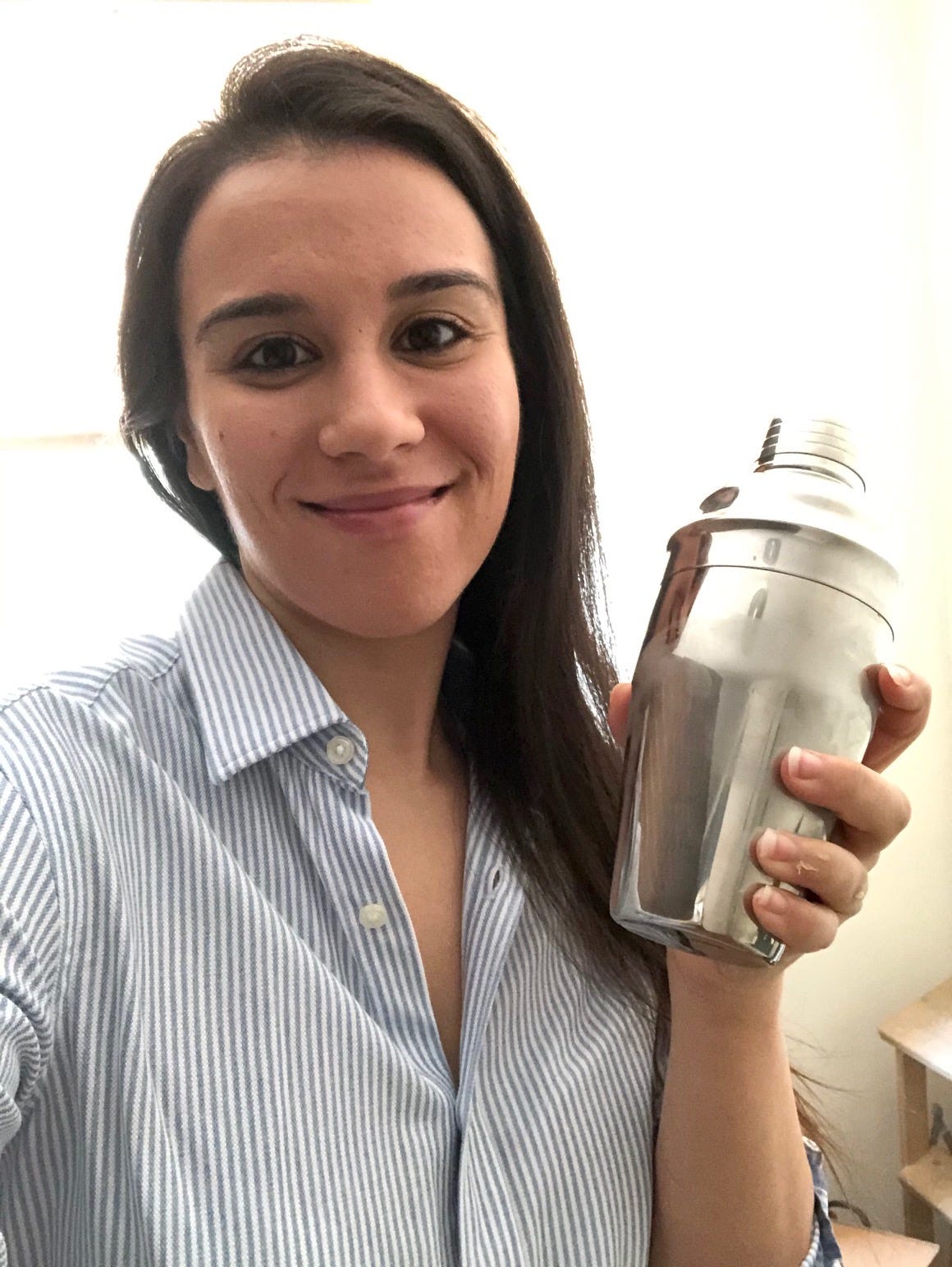 Anneta Konstantinides/InsiderI got ready to make some magic with my cocktail shaker.

There I was, in the one collared shirt I own, with my new cocktail shaker and a homemade cosmo on the way.

About 10 seconds later, my living room was covered in bright pink juice. 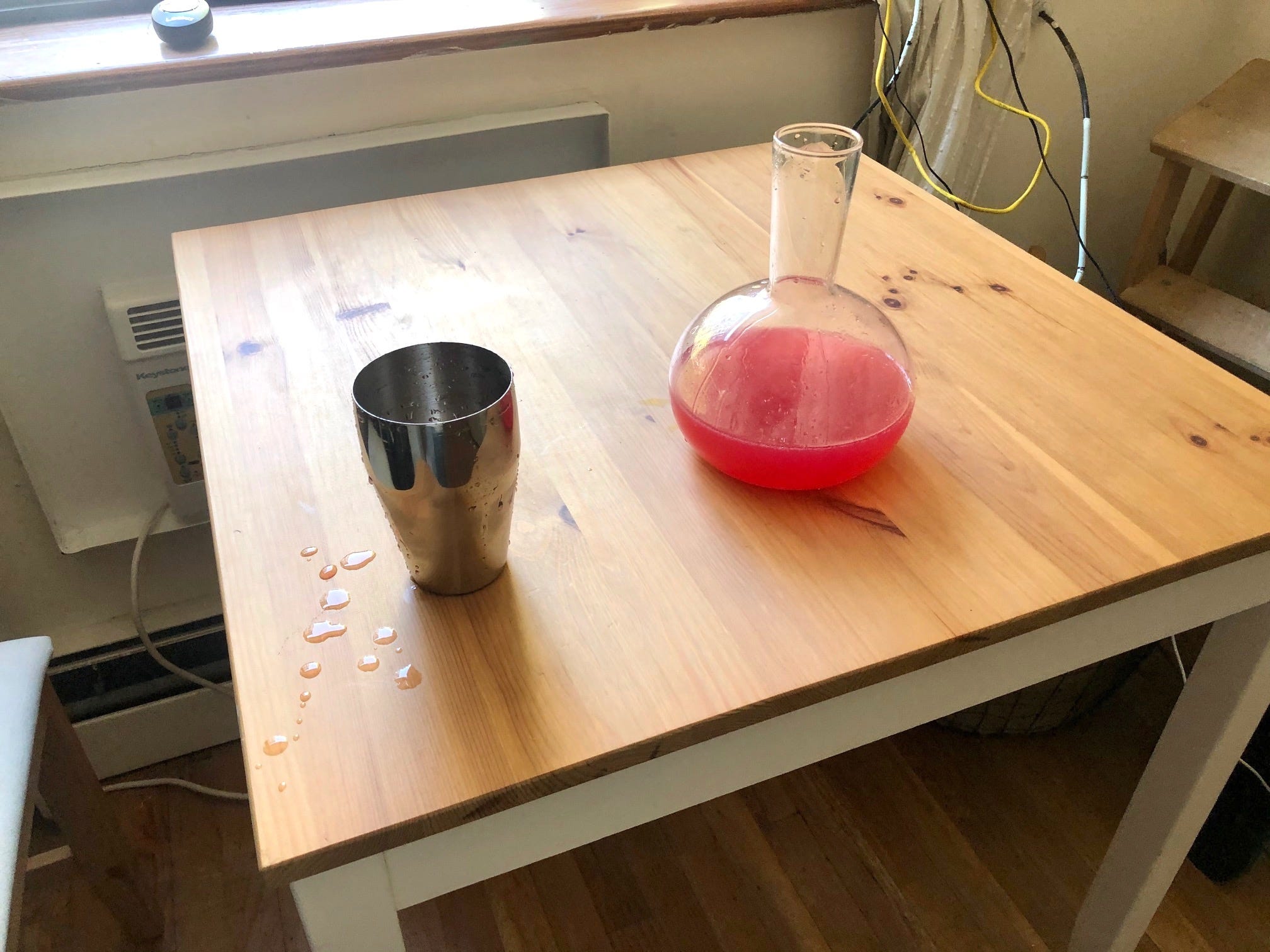 Anneta Konstantinides/InsiderToo bad I forgot to actually hold the top while shaking it.

In her video, Garten instructs her followers to shake the cosmopolitan mixture for 30 seconds.

But I barely got two shakes in before I realised I had forgotten the very first rule of using a cocktail shaker: hold the top of it.

Thankfully, my second attempt was seamless, and soon I had a beautiful pink drink in my hand. 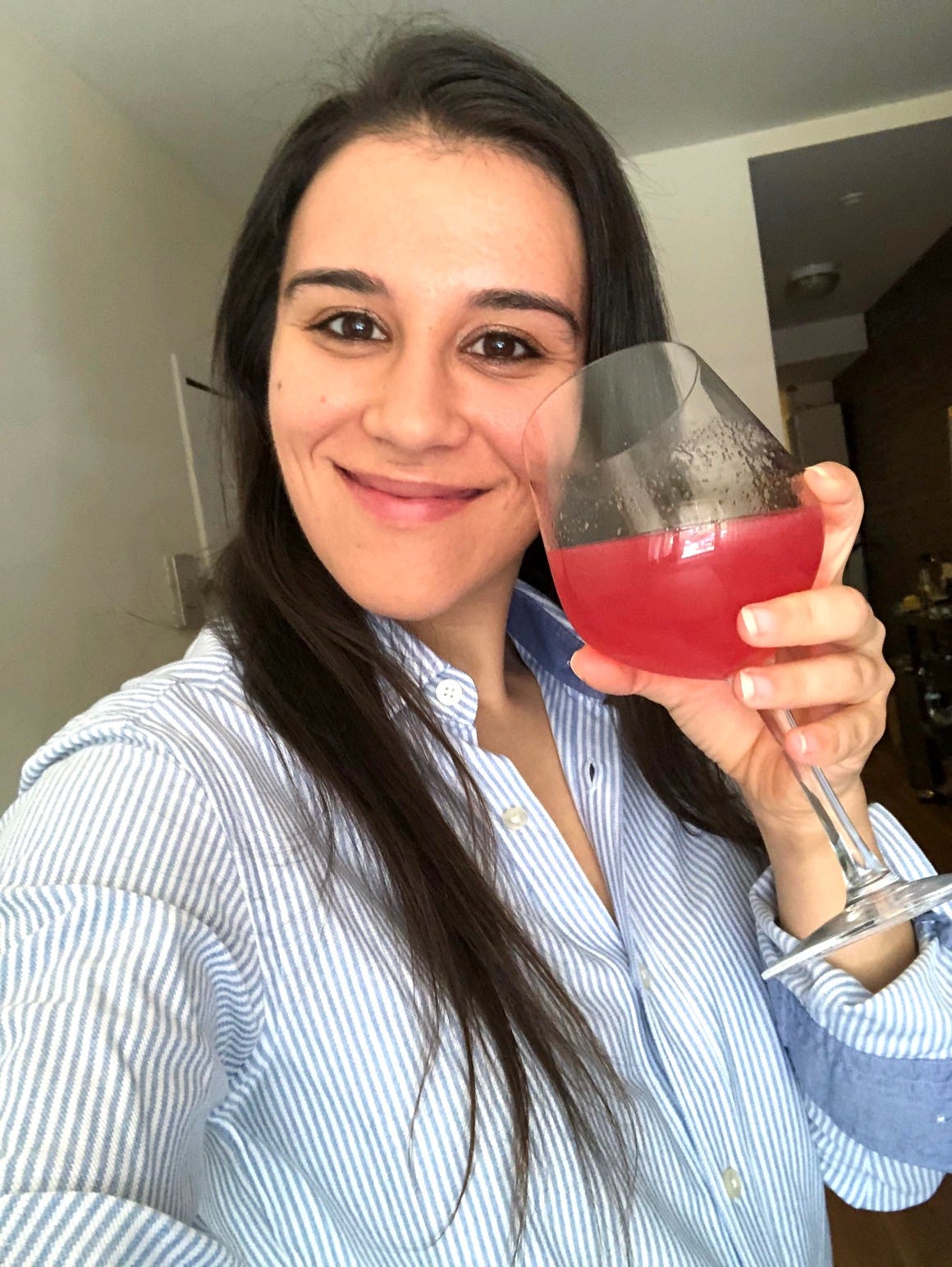 I didn’t have a martini glass (are you noticing a pattern here?) so I poured my drink into the largest wine glass I own to pay homage to Garten.

The hue of the cosmo was so fun and much more vivid than I was expecting. I had always associated cosmos with the kind of dark and trendy SoHo bars I first saw on “Sex and the City” reruns, but this looked like a refreshing summer cocktail fit for sipping on a rooftop.

And the drink was just as delicious as it looked. 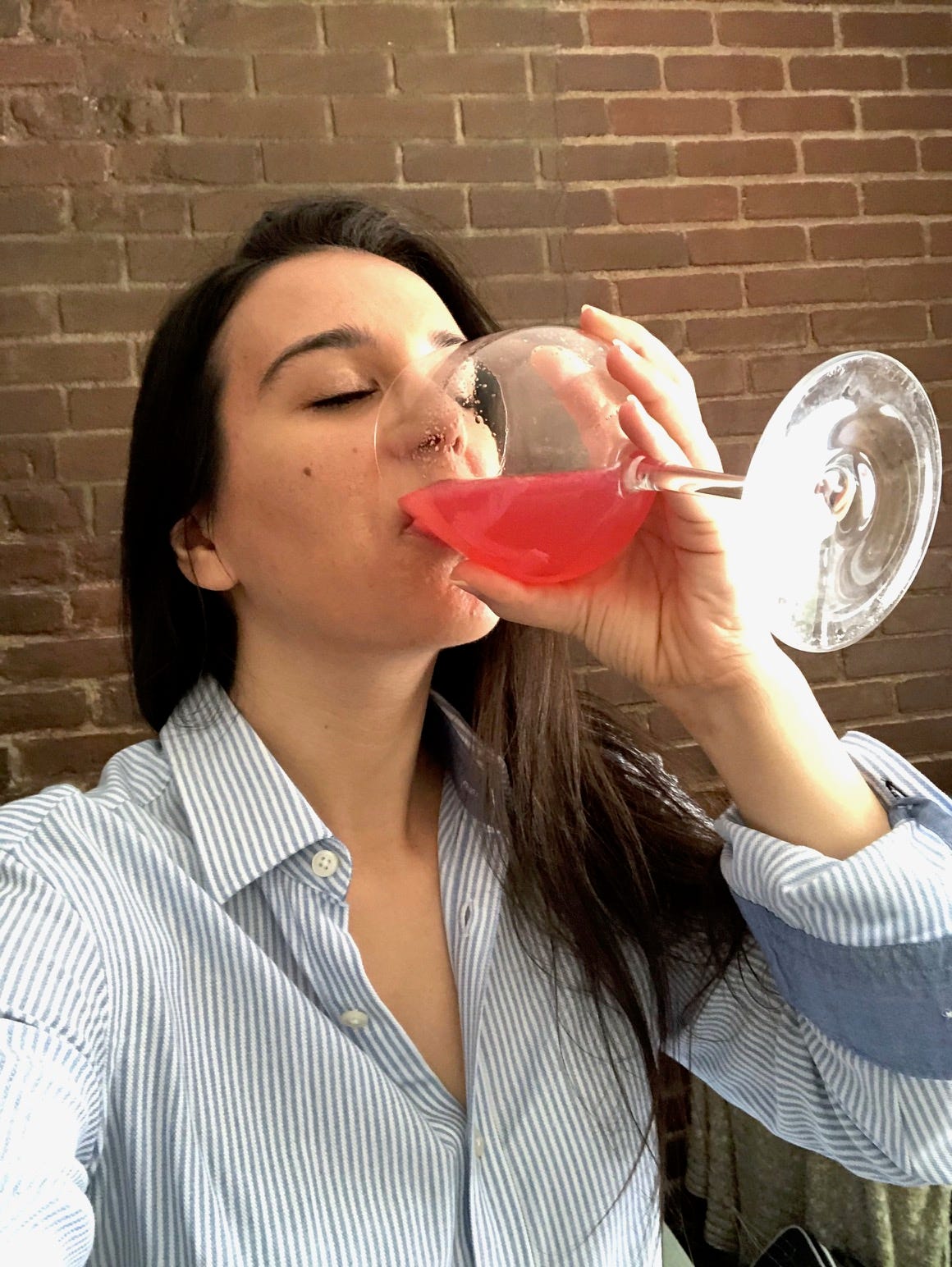 Despite my checkered past with vodka, I absolutely loved this cosmo. The orange flavour from the Cointreau combined with the lime and cranberry made for a super refreshing sip.

I was worried that the drink would be too sweet or that the vodka would taste too strong, but all the flavours were perfectly balanced.

Carrie Bradshaw may have had terrible taste in men, but she knew a great drink when she saw one!

Living like the Barefoot Contessa for a day was a much-needed reminder that cooking doesn’t have to be complicated to make you feel accomplished. 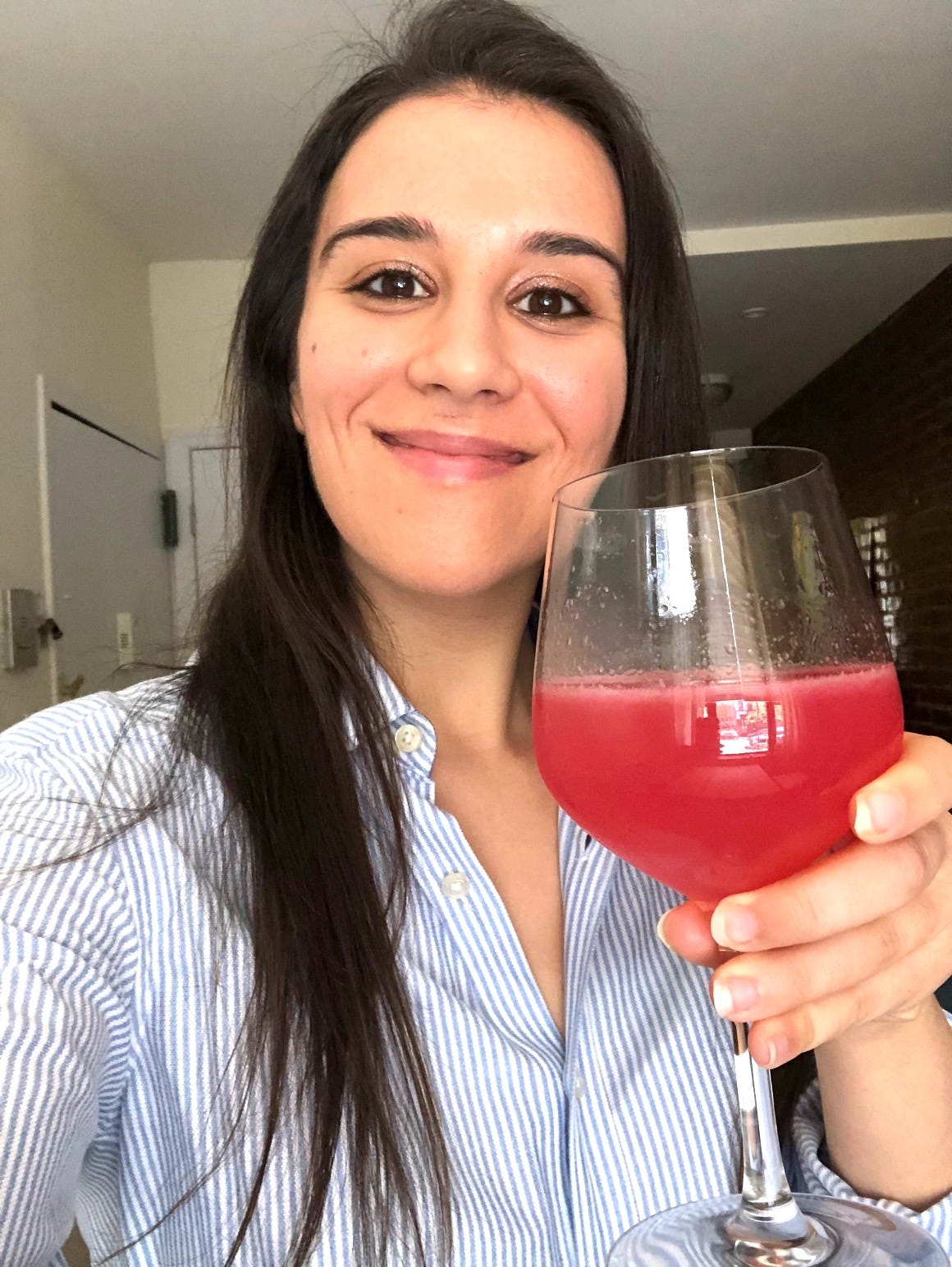 Anneta Konstantinides/InsiderGarten’s cosmo was the best thing I drank in quarantine.

Before lockdown, I rarely spent time in my kitchen. On the few nights I wasn’t out with friends or at an event, I’d throw some eggs in a pan, toss in some frozen veggies, and call it dinner.

Then New York shut down in March, and suddenly all I had was my kitchen. At first, I panicked. It seemed like everyone on my Instagram feed was making sourdough starter and whipping up delicious drinks. I just assumed I was destined for months of omelets and White Claws.

But as my day living like Garten ended, I realised I didn’t need to make a three-course meal to have some fun in the kitchen. I sipped my homemade cosmo, feeling a new sense of pride. Success in quarantine, I realised, could be as simple as learning a new cocktail. I’ll drink to that.