I made a Michelin-starred chef's version of the McDonald's McMuffin in just 10 minutes, and it blew the original out of the water 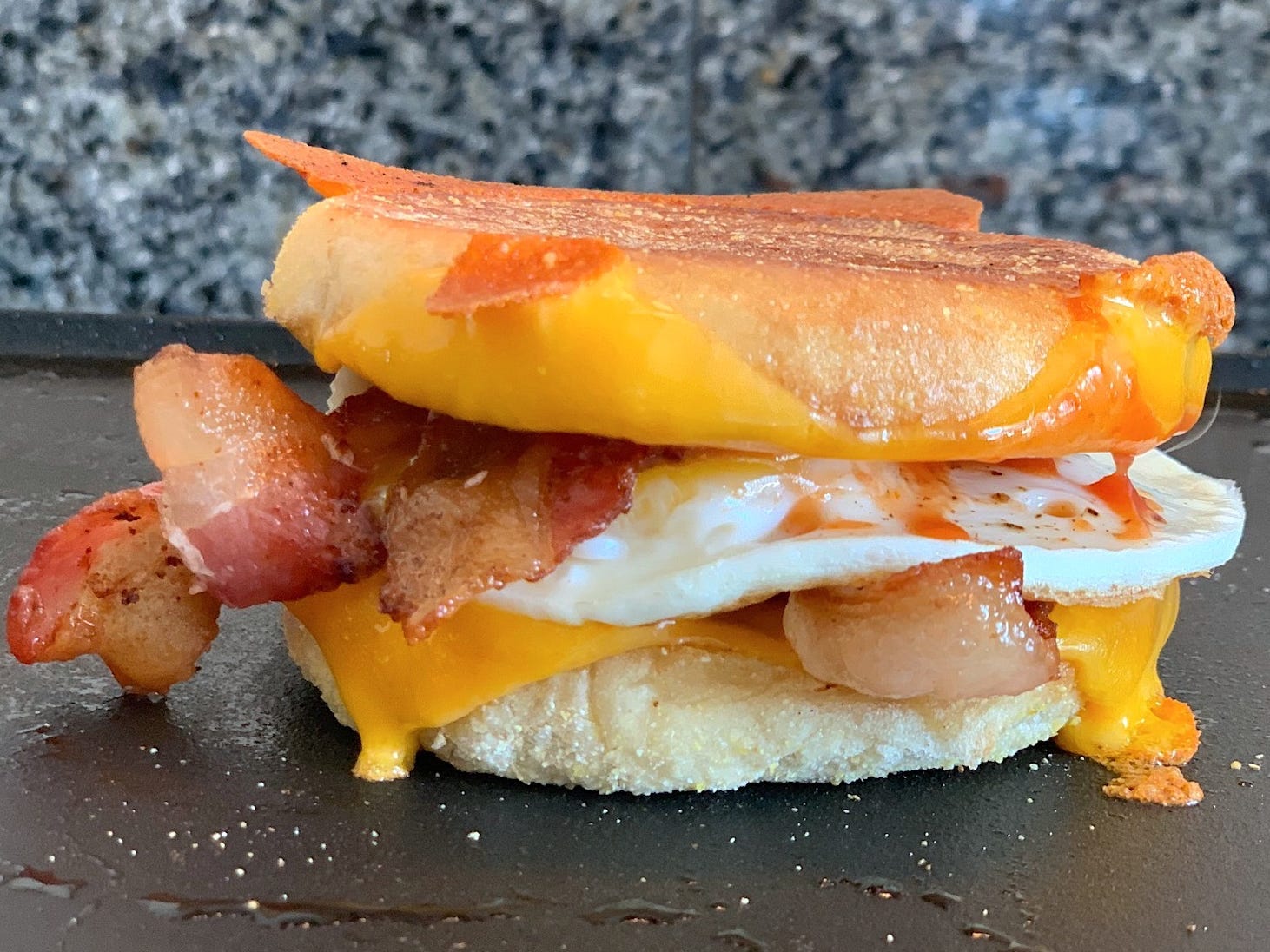 Anneta Konstantinides/InsiderI made a Michelin-starred chef’s version of the McDonald’s McMuffin, and it was far better than the original.

Over the last year, I’ve interviewed dozens of Michelin-starred chefs and learned about hundreds of delicious dishes to help us get through all this extra time in the kitchen.

But it was one chef’s recipe for an upgraded McDonald’s McMuffin that recently caught my eye.

Greg Marchand, the chef patron of Frenchie in London and Paris, told me that his homemade version of the chain’s beloved breakfast sandwich was not only healthier, it tasted “100 times better.”

So I decided to put Marchand’s bacon and egg muffin up against McDonald’s in a taste test, and discovered that the chef’s easy and foolproof sandwich â€” which only took 10 minutes to make â€” was far superior.

Greg Marchand first told me about his bacon and egg muffin when I asked Michelin-starred chefs to share their favourite quick lunches. 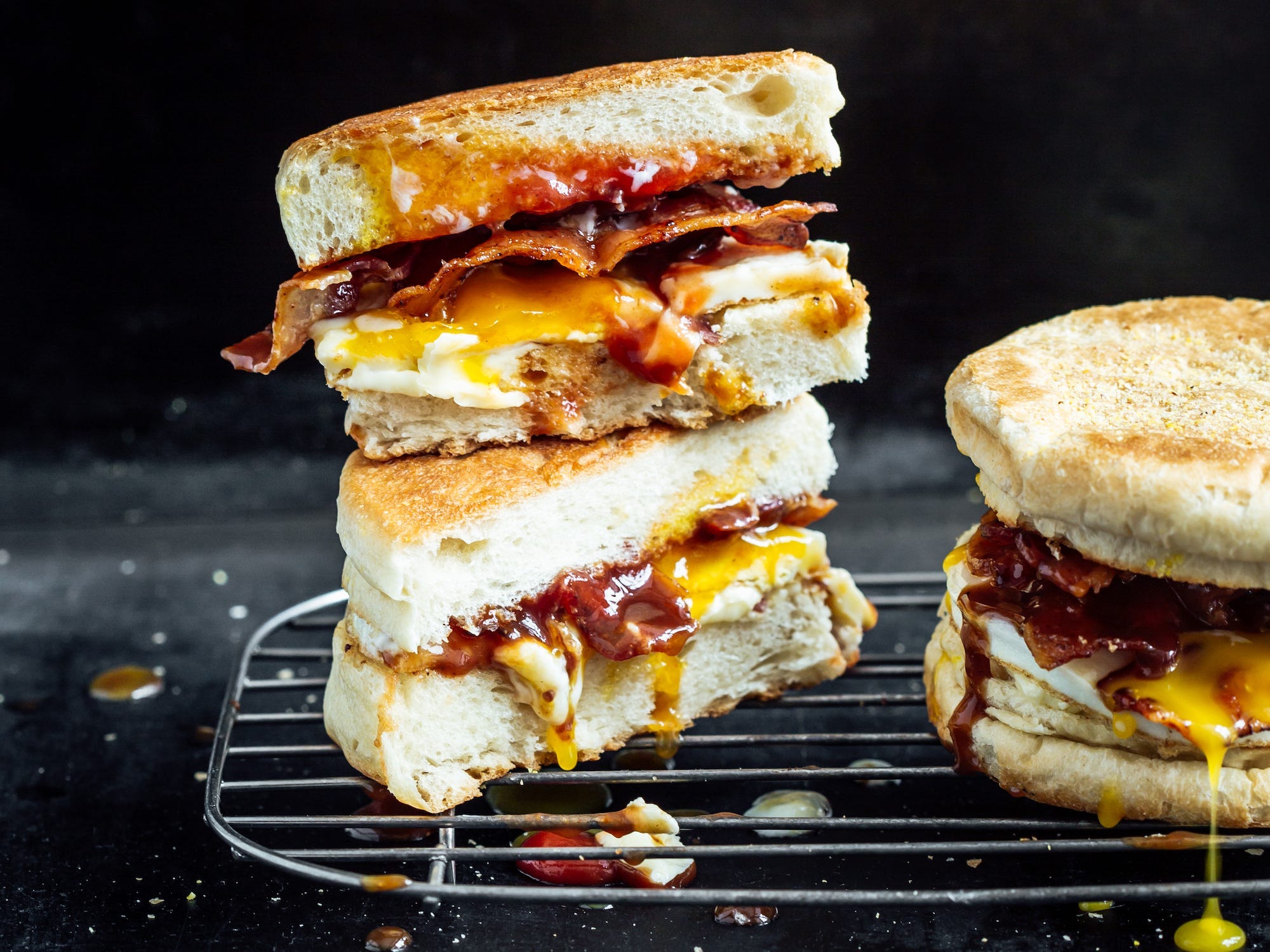 “This muffin wins, every time,” he said. “My kids and wife love it too and – if you’re like us and generally have cheese, eggs, and bacon in the fridge – it’s perfect and comes together in about 10 minutes.”

“It’s healthier than the famed McDonald’s version and about 100 times better!” he added.

The promise of a 10-minute breakfast sandwich already won me over. And after Marchand sent me a photo of his creation, I knew I had to try it for myself. 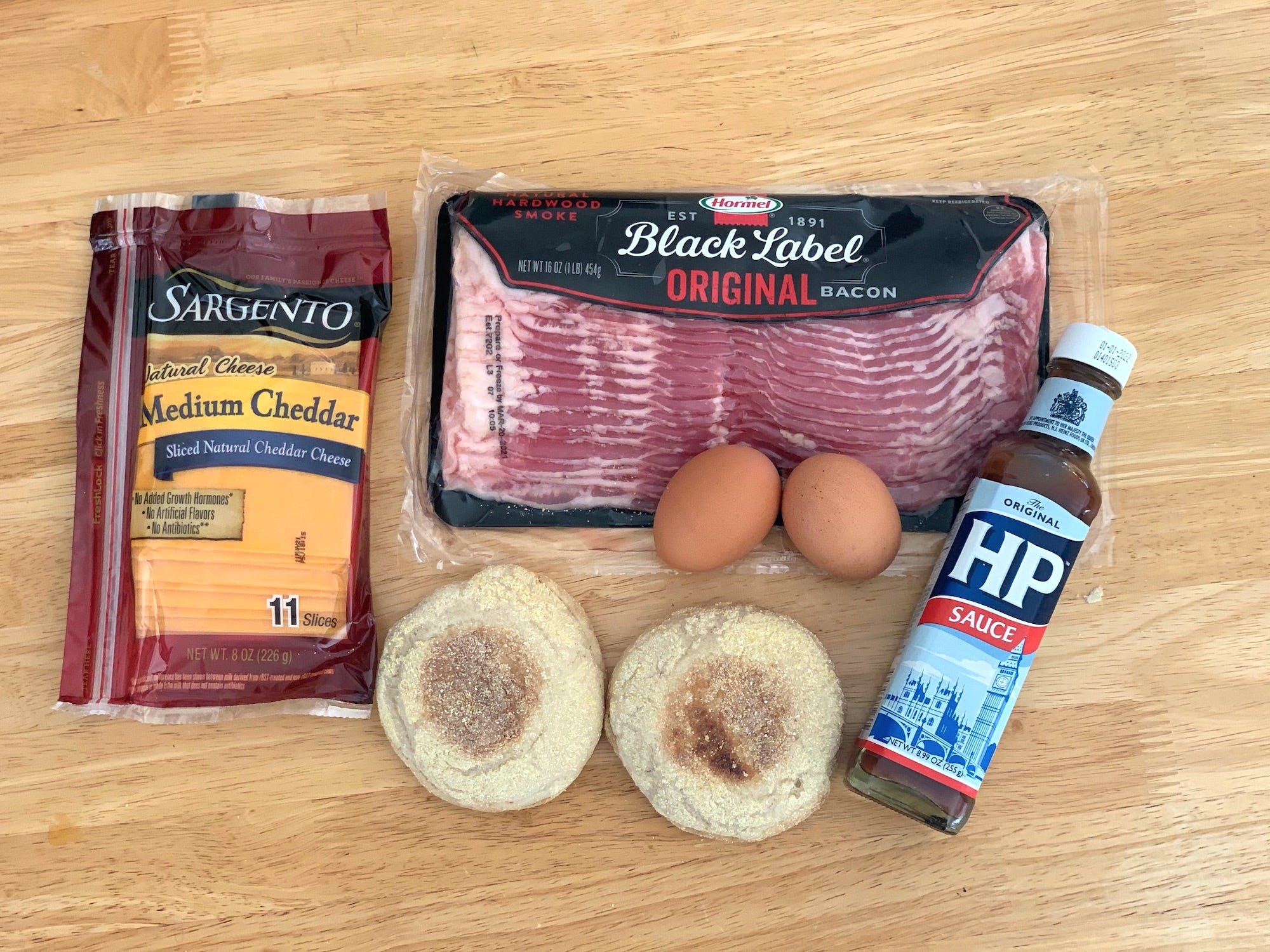 To whip up this Michelin-starred McMuffin, you’ll need:

“HP sauce is a popular condiment in Britain,” Marchand explained. “It’s a secret mixture made from tomatoes, tamarind, dates, and spices. It has a flavour that is sweet, spicy, and savoury.”

While it may have British roots, HP sauce is readily available at many US supermarket chains. Check the international foods aisle, or look by the ketchup and barbecue sauces.

To begin, I first cooked my bacon. 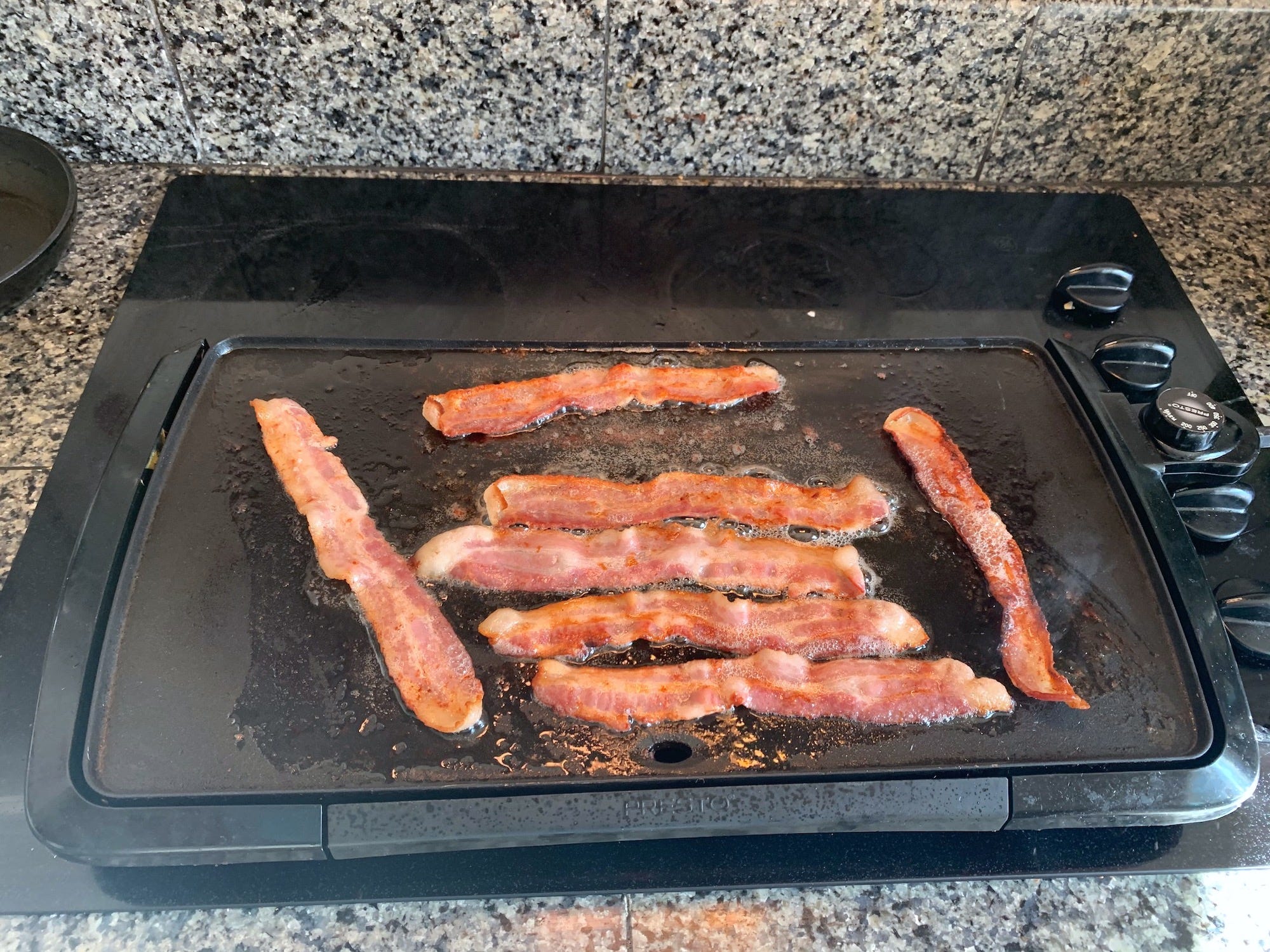 Anneta Konstantinides/InsiderIt only took a few minutes to cook the bacon.

Marchand recommends using a skillet or griddle for this recipe, and I went with the latter.

Since I was making breakfast for my family, I cooked two slices of bacon for each sandwich (plus an extra slice because why not?).

As the bacon started cooking, I prepped my English muffins. 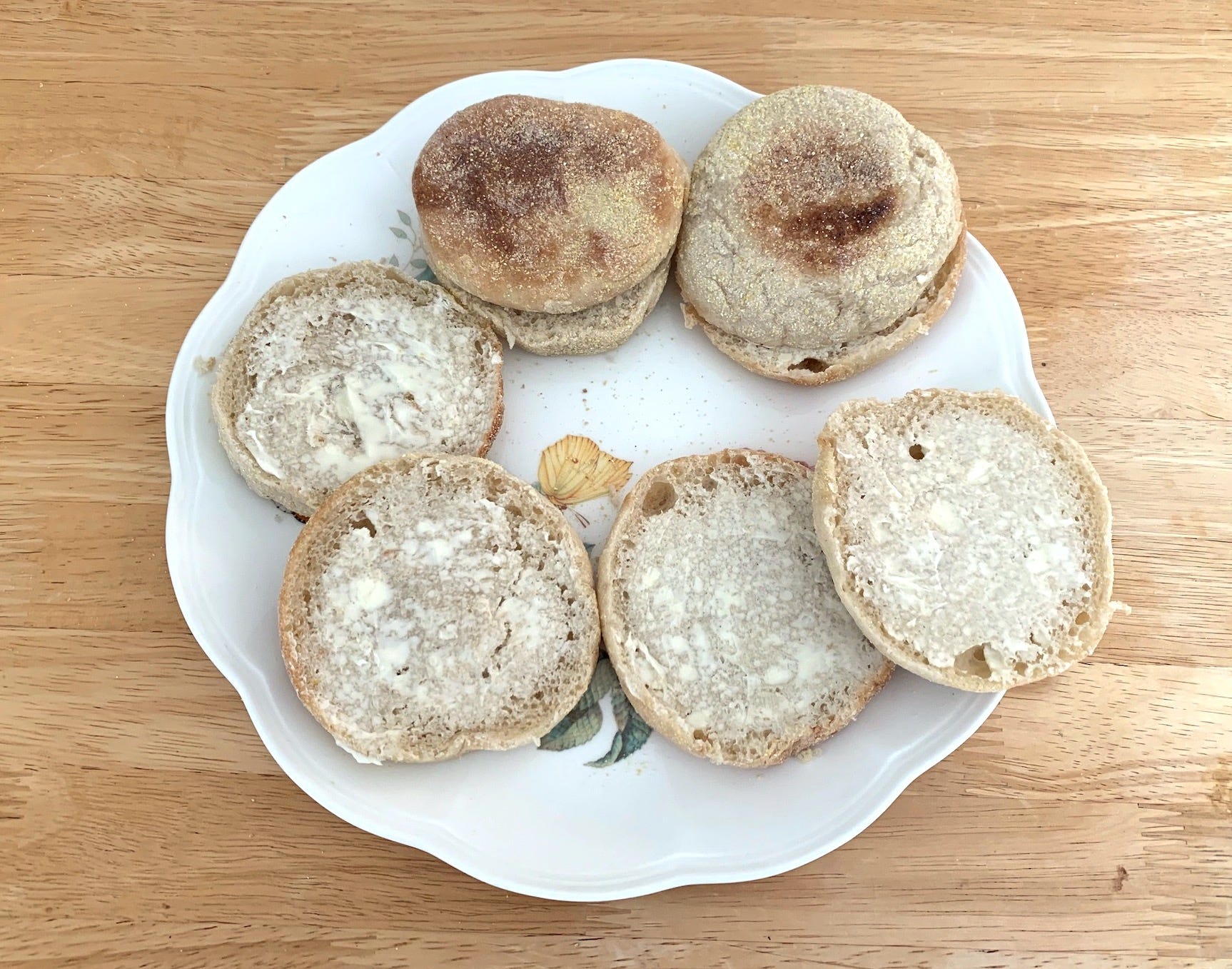 I cut each muffin in half across the middle and spread unsalted butter on both sides.

Marchand recommends keeping pre-sliced English muffins in your freezer so that “they’re there for a rainy day and a lunch like this.”

Once the bacon was ready, I started prepping the rest of the ingredients. 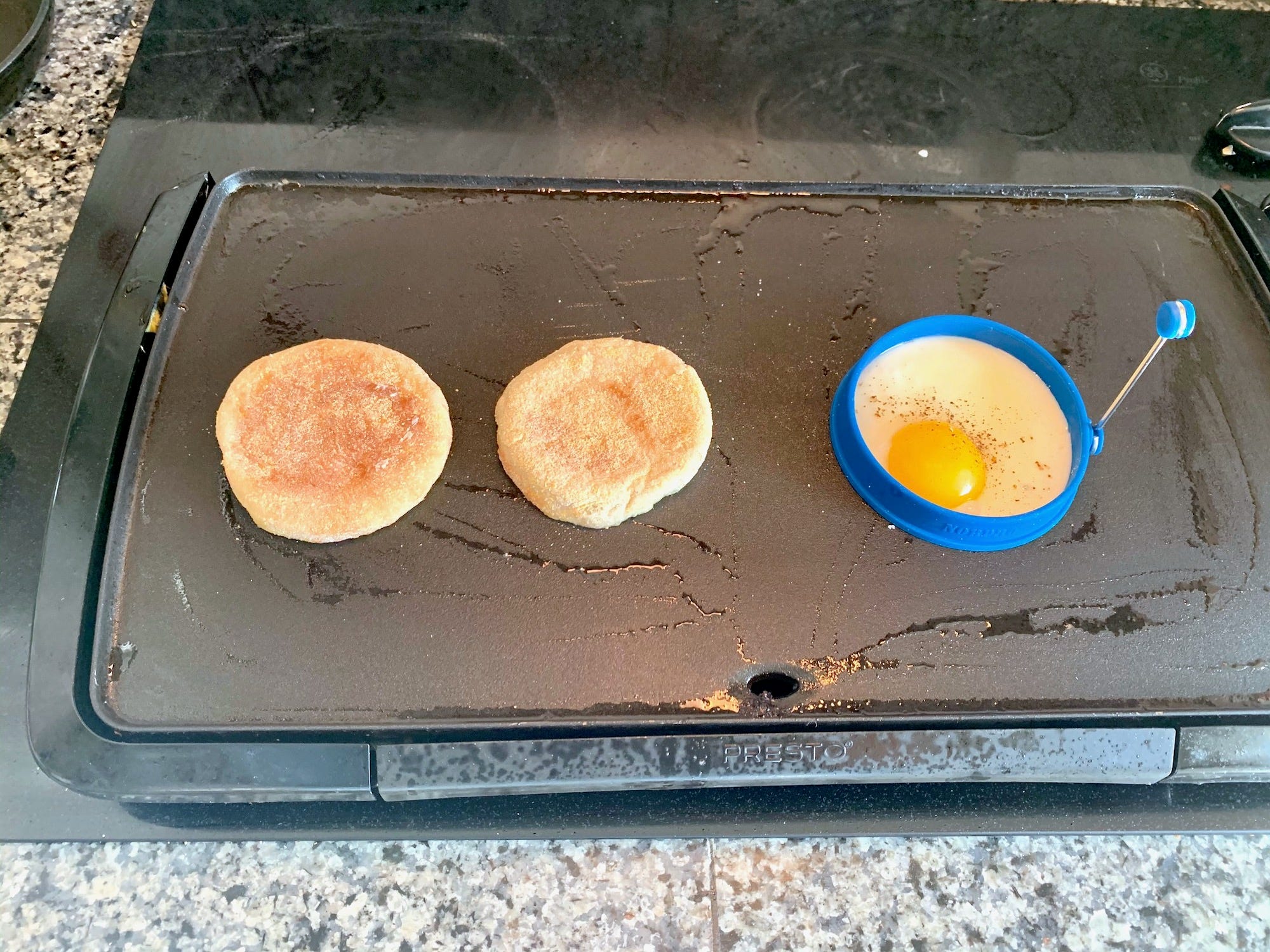 Anneta Konstantinides/InsiderI placed my English muffins buttered sides down on the griddle to help them soften.

I wiped the bacon grease from my griddle and added some olive oil, then cracked an egg into an egg ring that was the same size as my English muffins (per Marchand’s recommendation).

I then placed my first English muffin on the griddle – buttered sides down – to help it soften.

Then it was time to start building the sandwich. 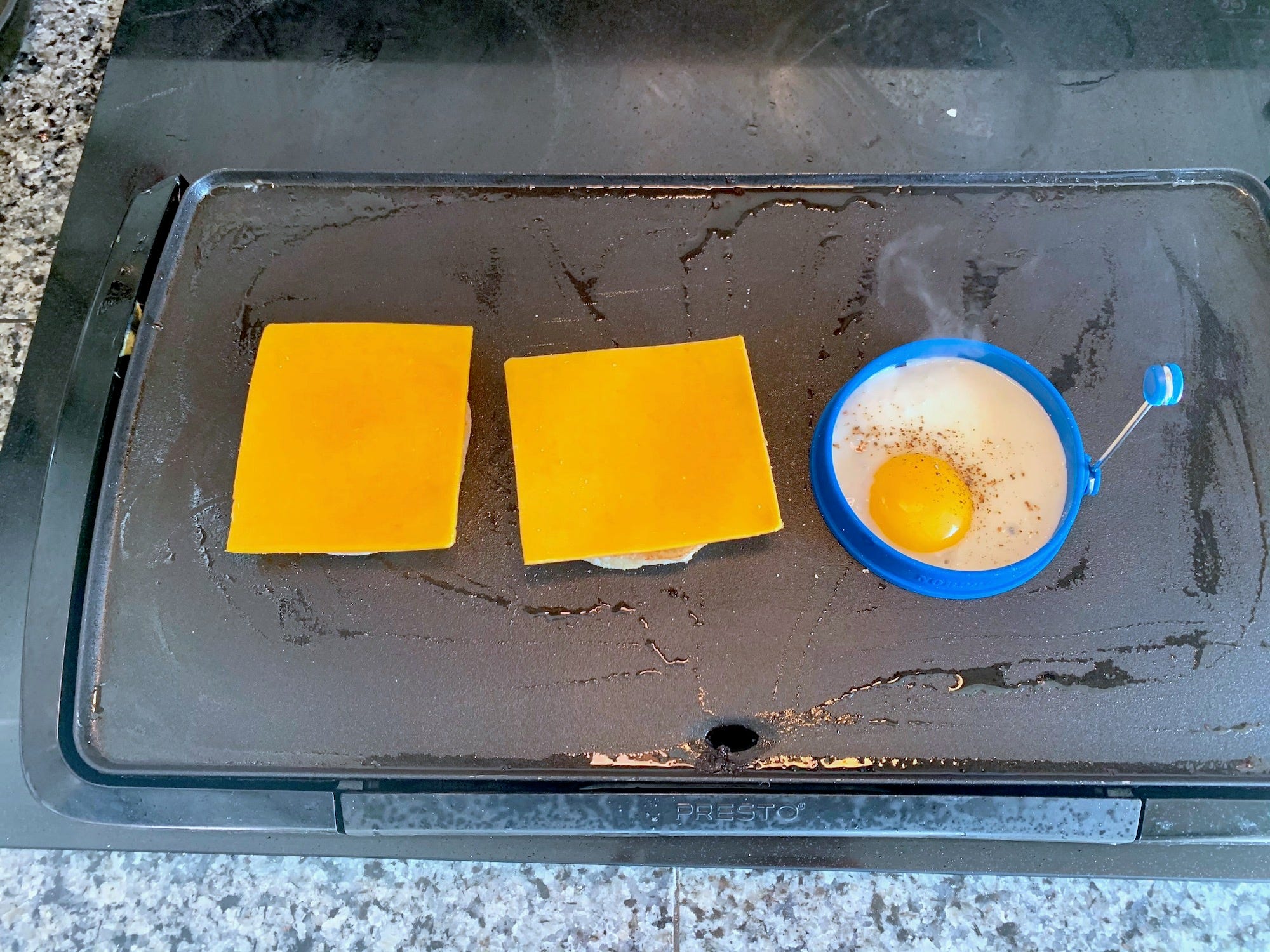 Anneta Konstantinides/InsiderI flipped my muffins over to toast the outsides as I melted the cheddar slices on them.

After about a minute or so, I flipped my English muffin halves over so that they could toast while I started making my sandwich directly on the griddle.

I placed a slice of cheddar cheese on each half, letting the heat of the muffin melt them.

Once the cheddar slices had softened, it was time for some saucin’. 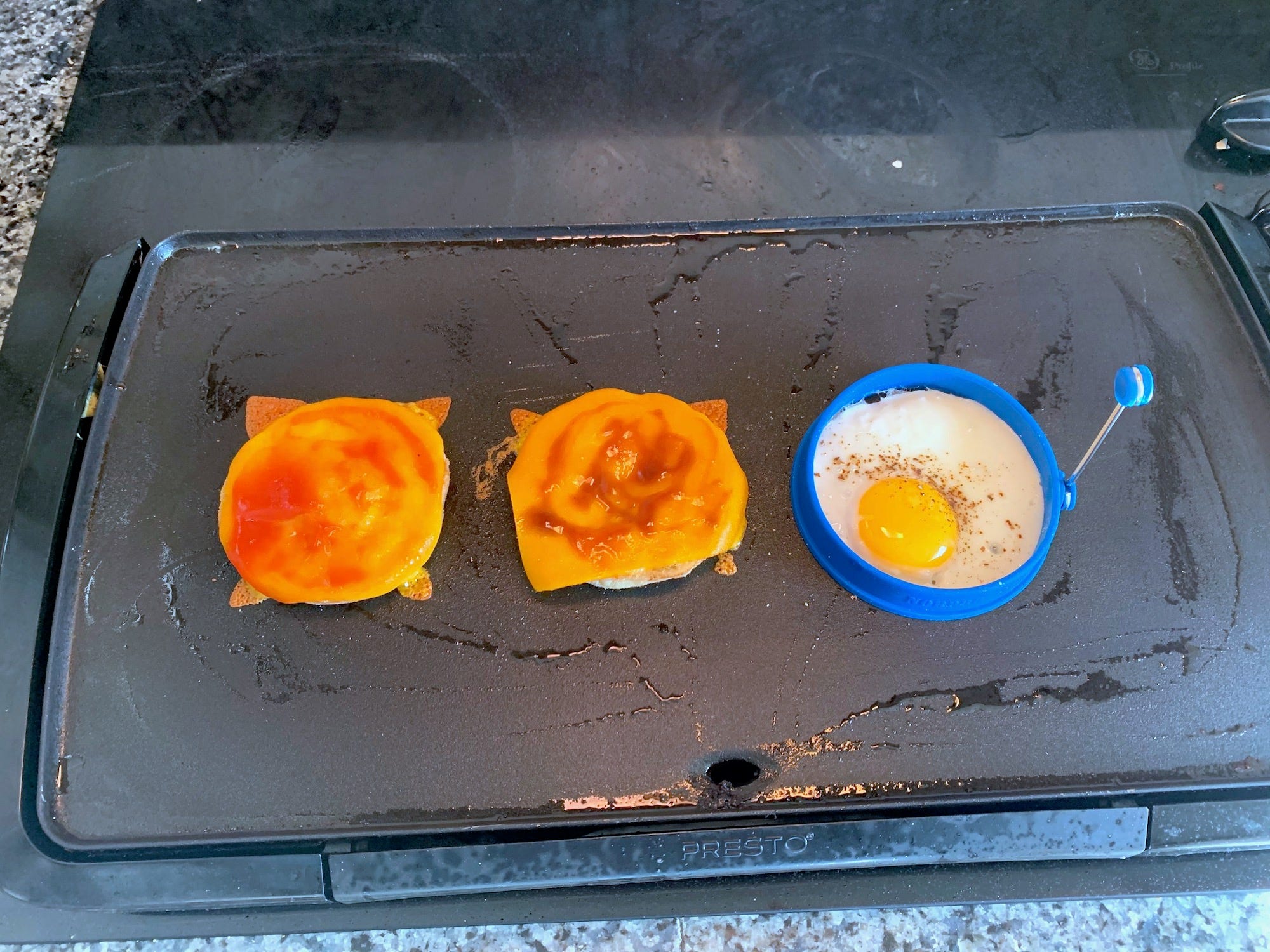 Anneta Konstantinides/InsiderI added ketchup to one of the halves and HP sauce on the other.

Marchand recommends adding ketchup to one of the muffin halves, and HP sauce on the other.

Then I added the bacon slices. 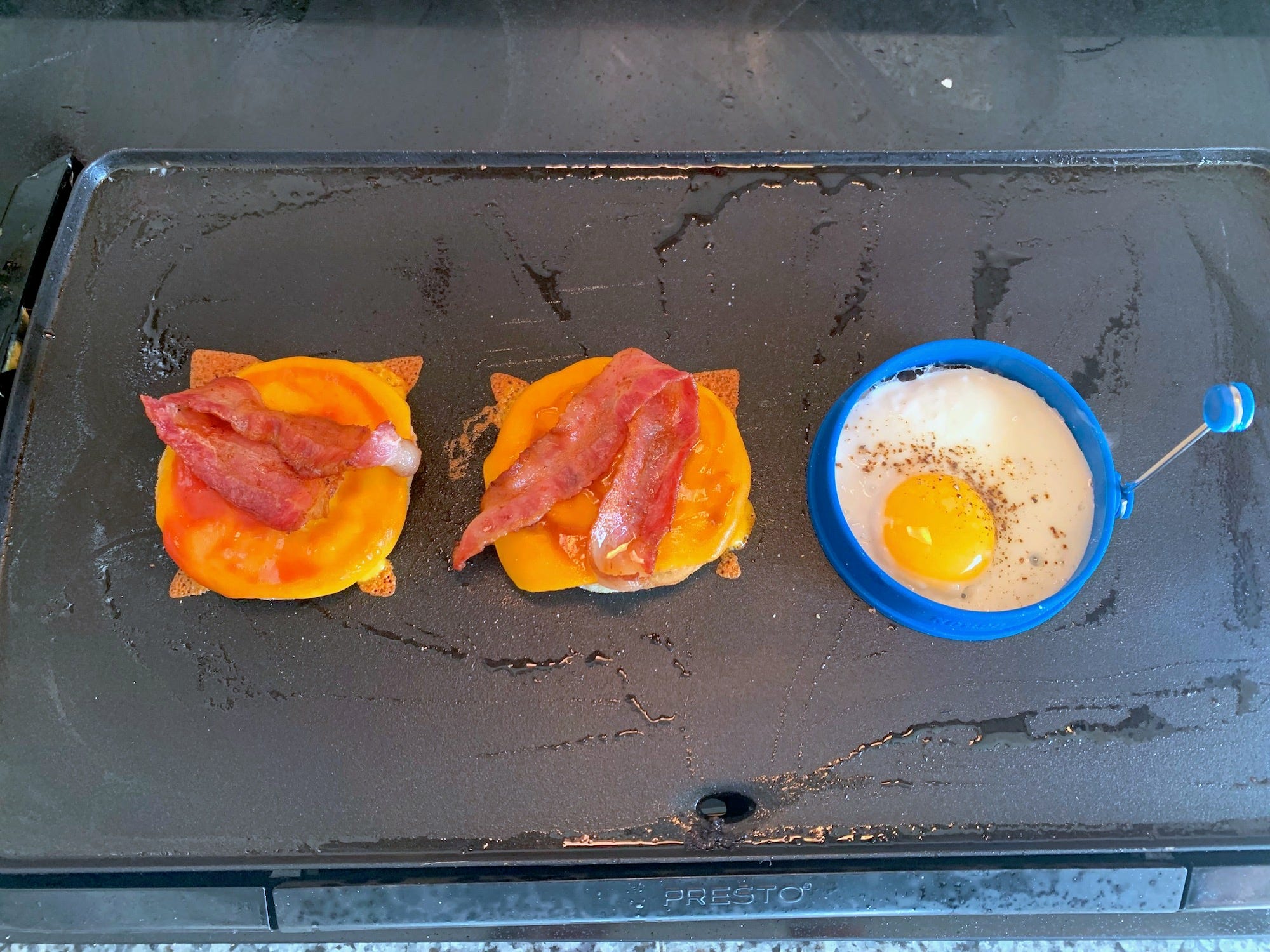 Anneta Konstantinides/InsiderI split two bacon slices in half and put two on each muffin half.

After the bacon finished cooking, I placed the slices on a plate lined with a paper towel to drain the grease.

Before I put the slices on the sandwich, I made sure to break them in half so they would fit nicely.

Next, I plopped my egg right on top. 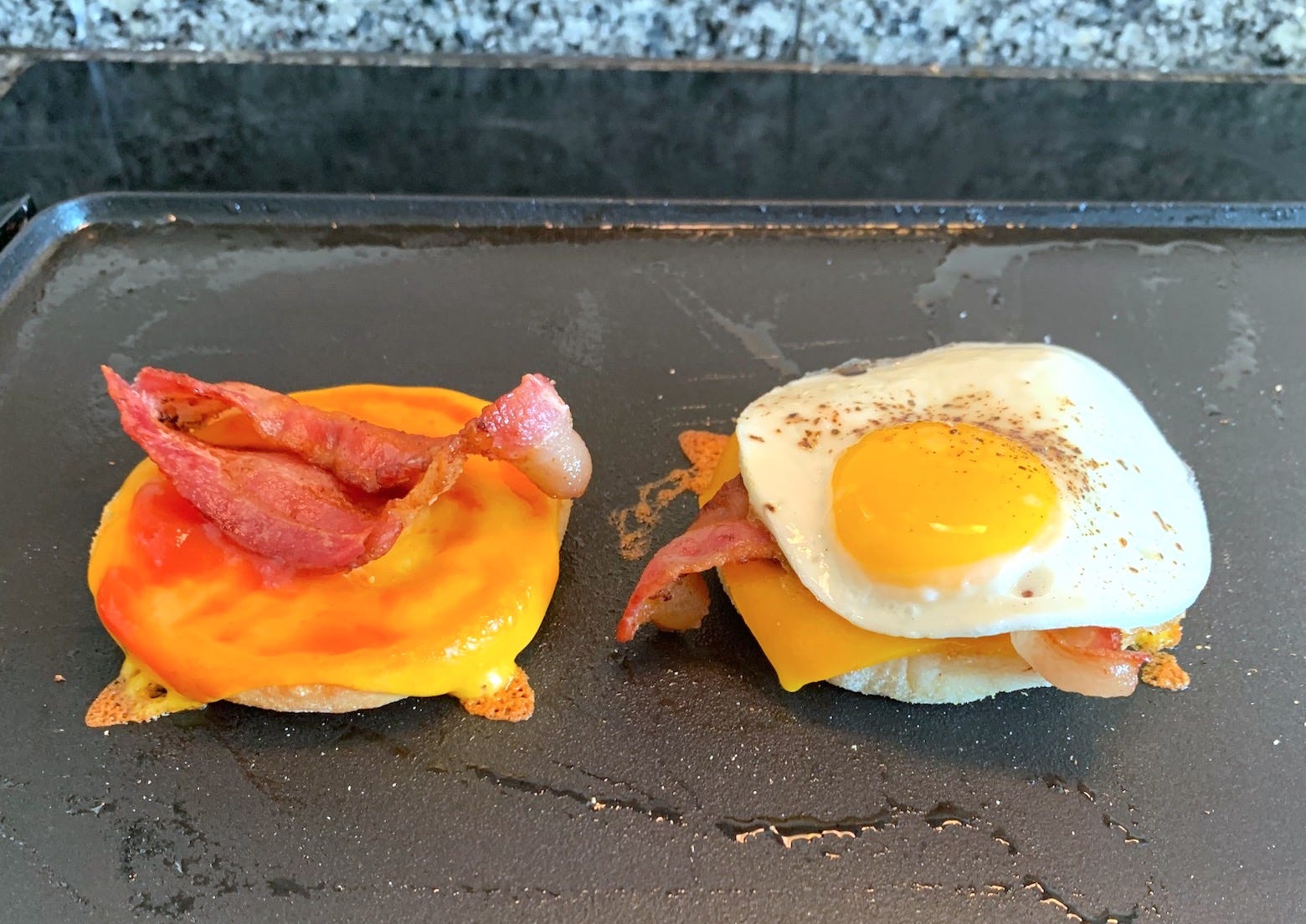 Anneta Konstantinides/InsiderOnce my egg was ready, I carefully placed it on one of my muffin halves.

My fried egg cooked in just a few minutes. Don’t forget to season it with some salt and pepper!

I then carefully placed the top half of the muffin on my sandwich, making sure not to break the yolk.

Marchand recommends only bringing the two halves of your sandwich together when it’s time to eat “so that you can have the pleasure of breaking the yolk as you sink your teeth into it.”

I put Marchand’s bacon and egg muffin next to the McMuffin, and it already looked far more impressive. 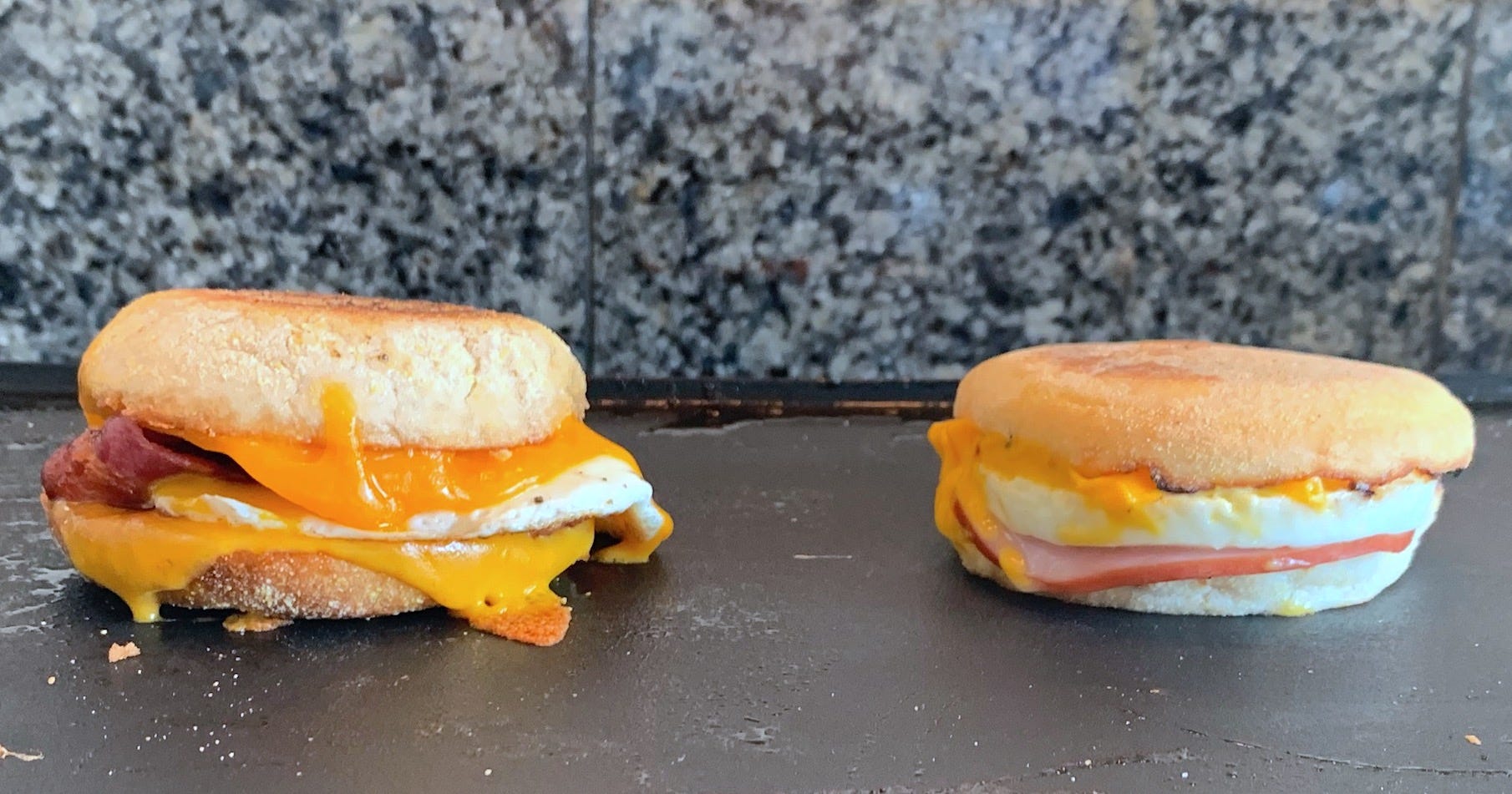 My dad picked up some Egg McMuffins from the drive-thru at our local McDonald’s before my taste test, and things already weren’t looking great for the fast-food giant.

Similarly to Marchand’s sandwich, the McDonald’s Egg McMuffin is made with a toasted English muffin and “freshly cracked” egg, butter, and “melty American cheese,” as well as lean Canadian bacon, according to its website.

Marchand’s version appeared fluffier than the squished McDonald’s sandwich, which had a much flatter English muffin. I could tell Marchand’s muffin also had a lot more cheese, which looked delicious as it melted down the sides of the sandwich.

The Michelin McMuffin was clearly more visually appealing, but would it taste “100 times better” as Marchand had promised? It was time to find out.

Moist, cheesy, and crunchy are just three of the words I would use to describe this incredible sandwich. 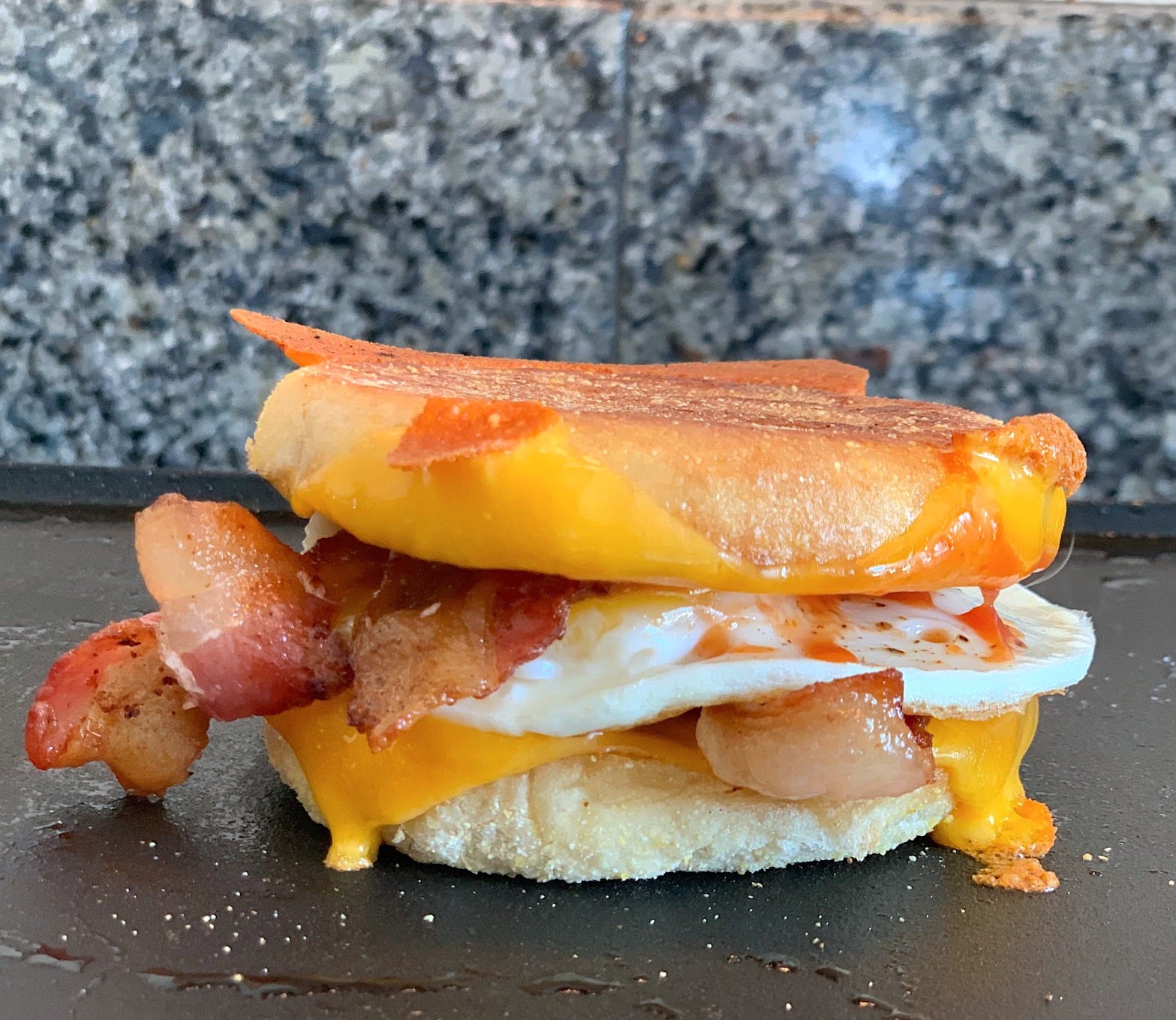 Anneta Konstantinides/InsiderMarchand’s egg and bacon sandwich was savoury and moist.

I’ve made dozens of great dishes over these last 10 months, but Marchand’s egg and bacon muffin is easily one of my favourites.

The sandwich is structured in a way that gives you a little bit of everything with every bite, and the ingredients are all covered in the delicious yolk that soaks the sandwich once you sink your teeth into it.

My parents both loved how moist the sandwich was, along with that sweet kick of flavour from the HP sauce.

“Overall it’s a great experience,” my mum said. “Can I have one of these every day?”

When it was time to try the McDonald’s McMuffin, the differences were instantly obvious. 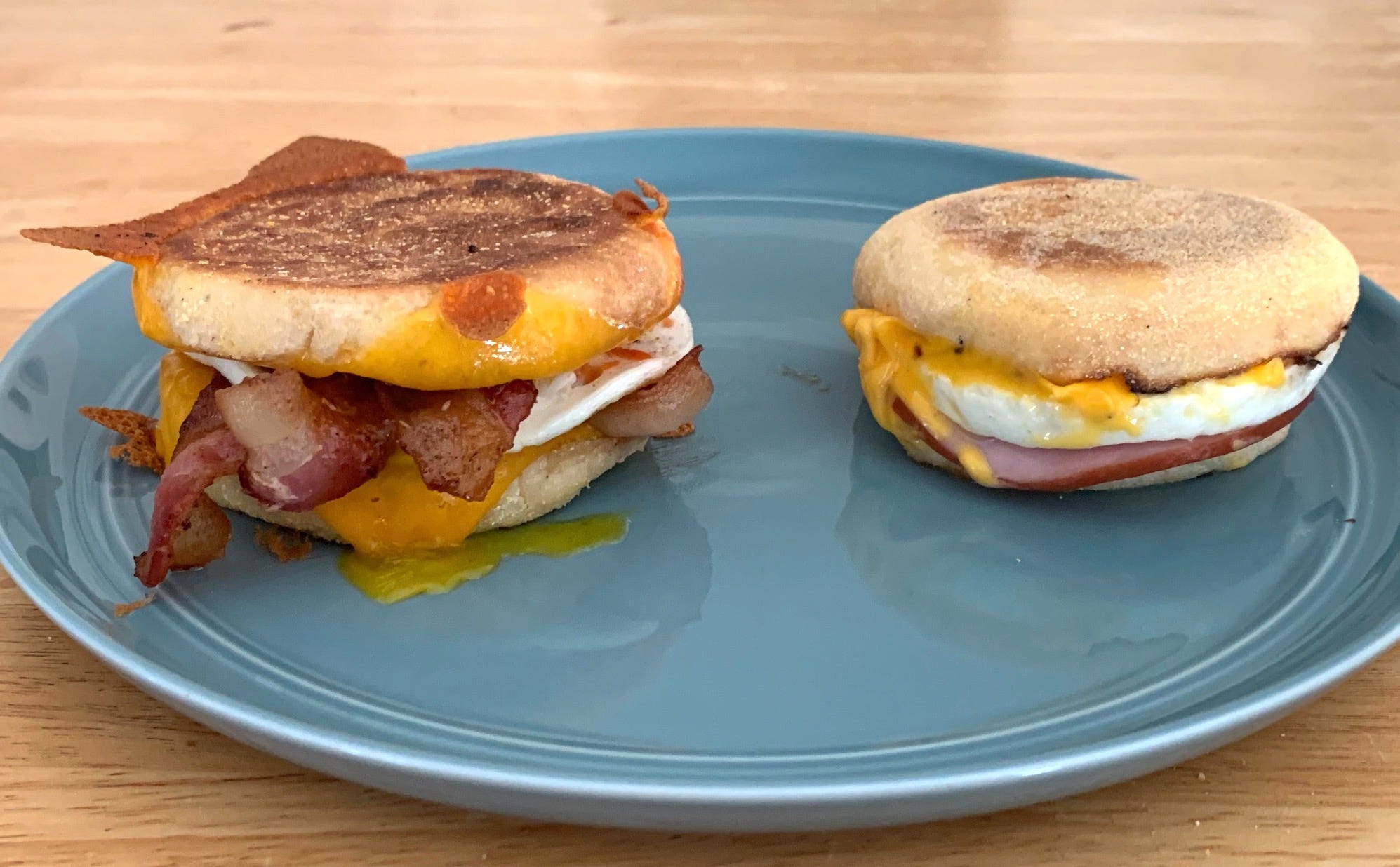 Anneta Konstantinides/InsiderMarchand’s sandwich was moist and crunchy, but the McMuffin was chewy and dry.

While Marchand’s sandwich is delightfully crunchy, McDonald’s McMuffin is just chewy. The English muffin from the fast-food giant was really dry, the egg tasted rubbery, and the entire thing needed some sauce.

“It’s not juicy or moist,” my dad said. “There’s a plastic flavour.” 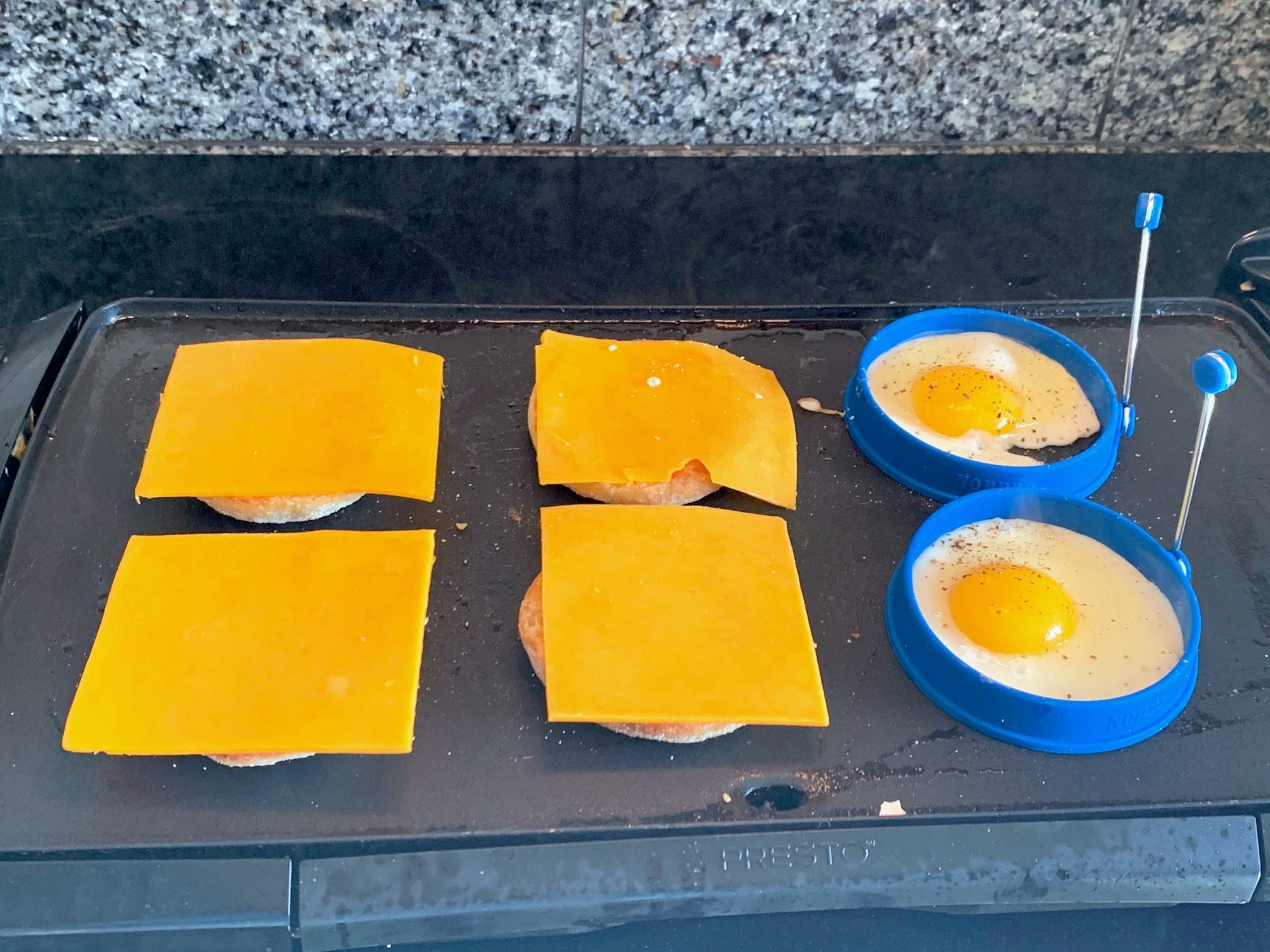 Anneta Konstantinides/InsiderI was able to make breakfast for my whole family in 20 minutes with Marchand’s recipe.

Breakfast sandwiches can take a lot of time – especially when you’re cooking for the entire family.

But Marchand’s recipe is so easy, especially if you’ve got a griddle or large skillet and can make multiple sandwiches at once. The ingredients are cheap and pantry-friendly, and everything cooks in a matter of minutes.

I would definitely recommend Marchand’s egg and bacon sandwich for any meal. 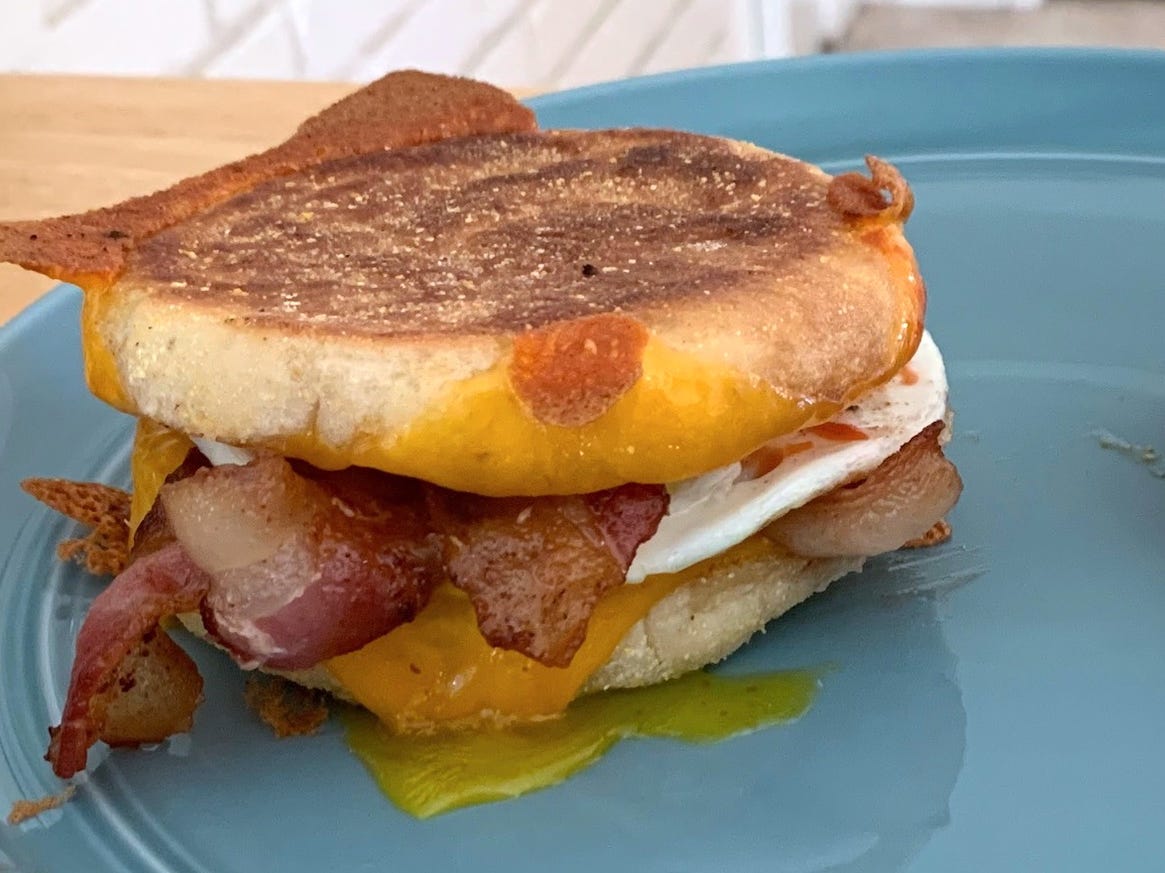 Anneta Konstantinides/InsiderMarchand’s egg and bacon muffin is definitely a winner in my books.

It’s an incredibly comforting dish, one that would be perfect for a filling lunch, midnight snack, or hungover breakfast.

And it will take the same amount of time to make – if not less – than getting through the line at a McDonald’s drive-thru.