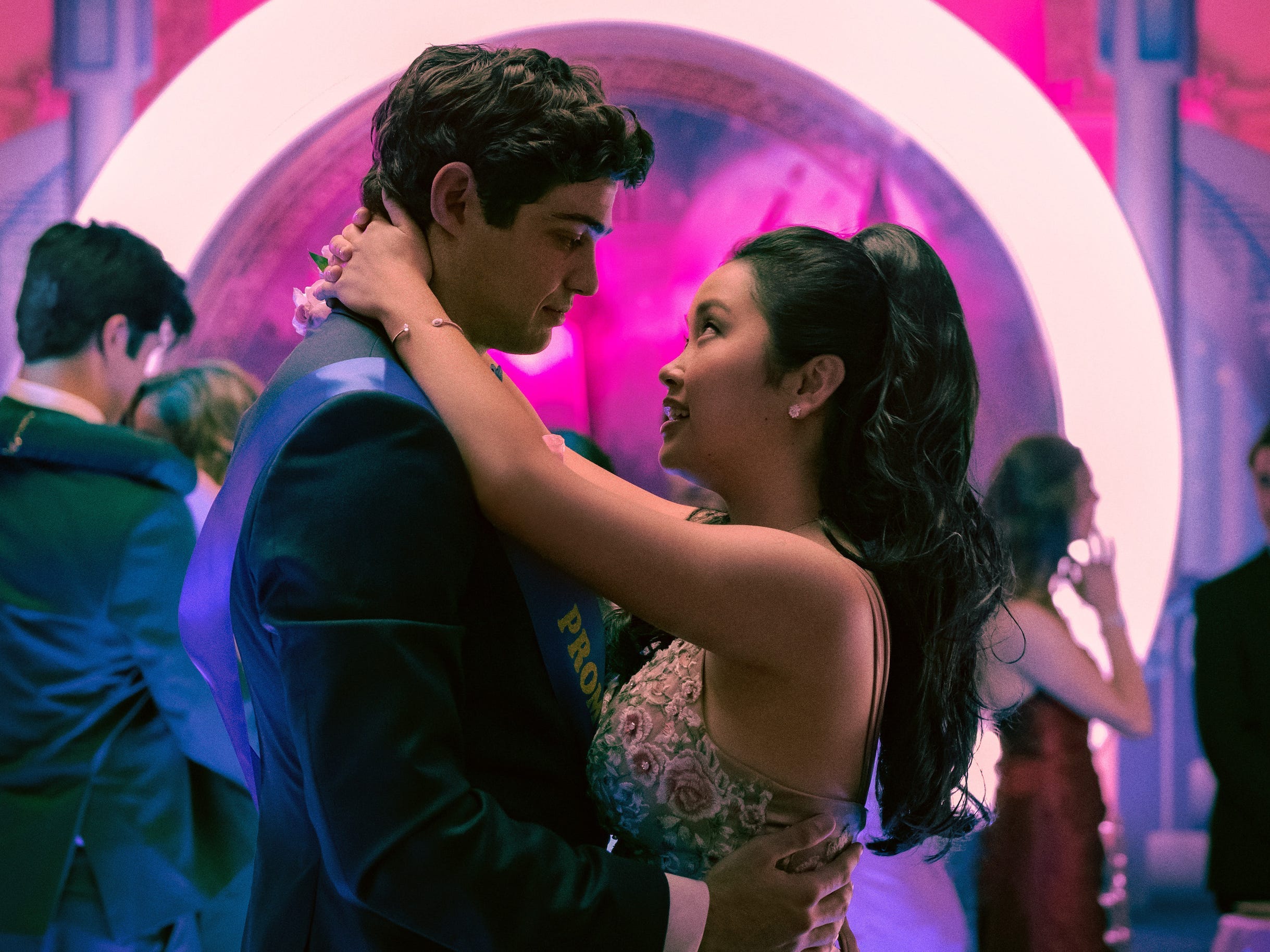 Katie Yu/NetflixNoah Centineo and Lana Condor in ‘To All the Boys: Always and Forever.’

Netflix’s popular movie series recently ended with the release of its final instalment, “To All the Boys: Always and Forever.”

The film trilogy, based on the book series by Jenny Han, follows Lara Jean’s (Lana Condor) attempts at romance during her final years of high school.

Read on to see where all of the main characters ended up throughout the series.

Warning: This slideshow contains major spoilers for the “To All the Boys” trilogy.

Josh’s story starts and ends in the first movie. 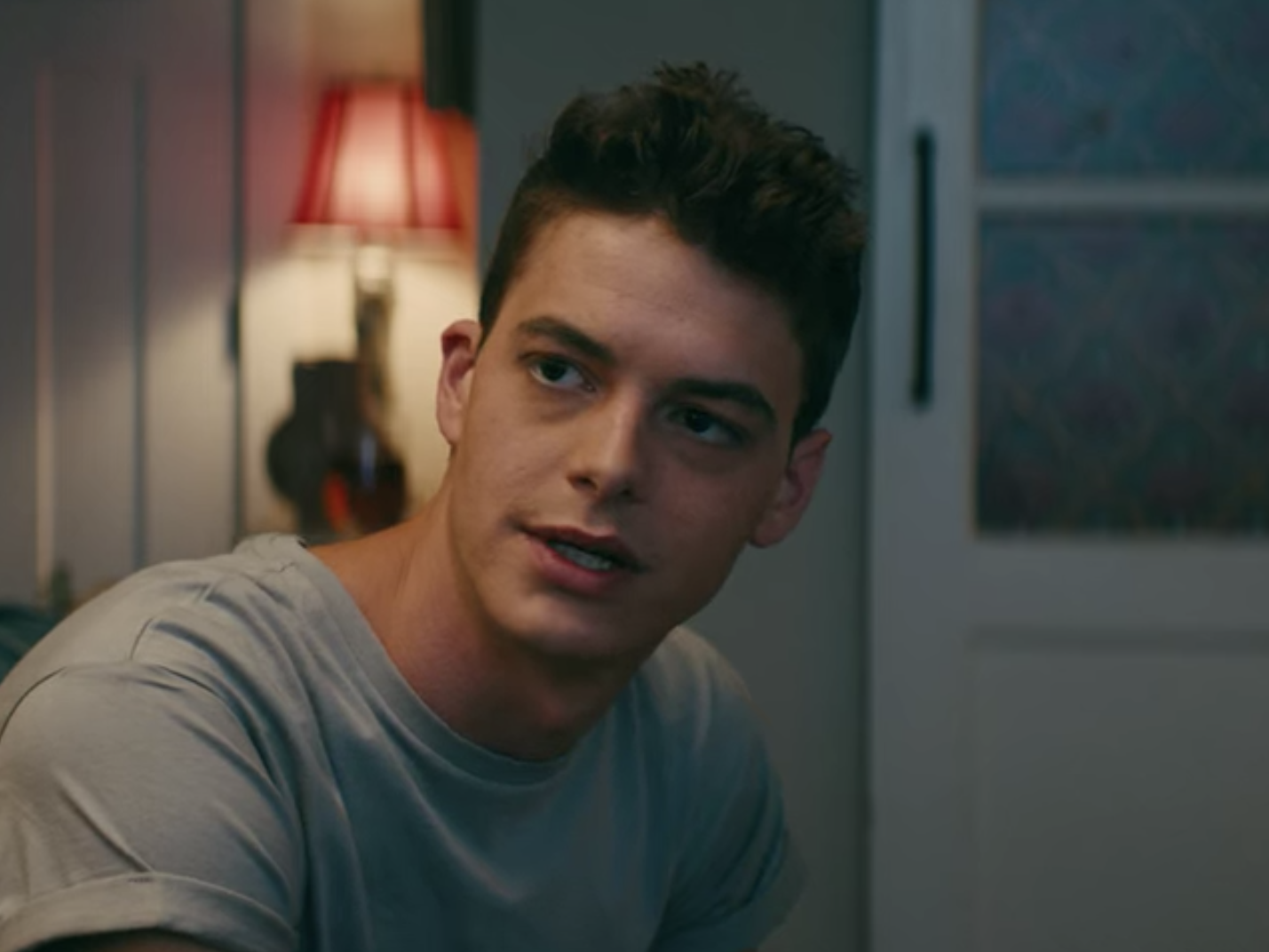 NetflixIsrael Broussard as Josh in ‘To All the Boys I’ve Loved Before.’

Lara Jean’s neighbour, Josh (Israel Broussard), is her older sister Margot’s boyfriend at the start of the first movie.

Margot breaks up with him before she leaves for college, but Josh and Lara Jean plan to remain friends after the split – in part because Lara Jean has a secret crush on him.

But after he receives a love letter from Lara Jean that he was never supposed to see, she devises an impromptu plan to date Peter Kavinsky in order to avoid the embarrassment of facing Josh.

Josh ends up confessing his own feelings to Lara Jean, but by that point, she’s already fallen for her fake boyfriend.

John Ambrose McClaren gets his heart broken at the Star Ball. 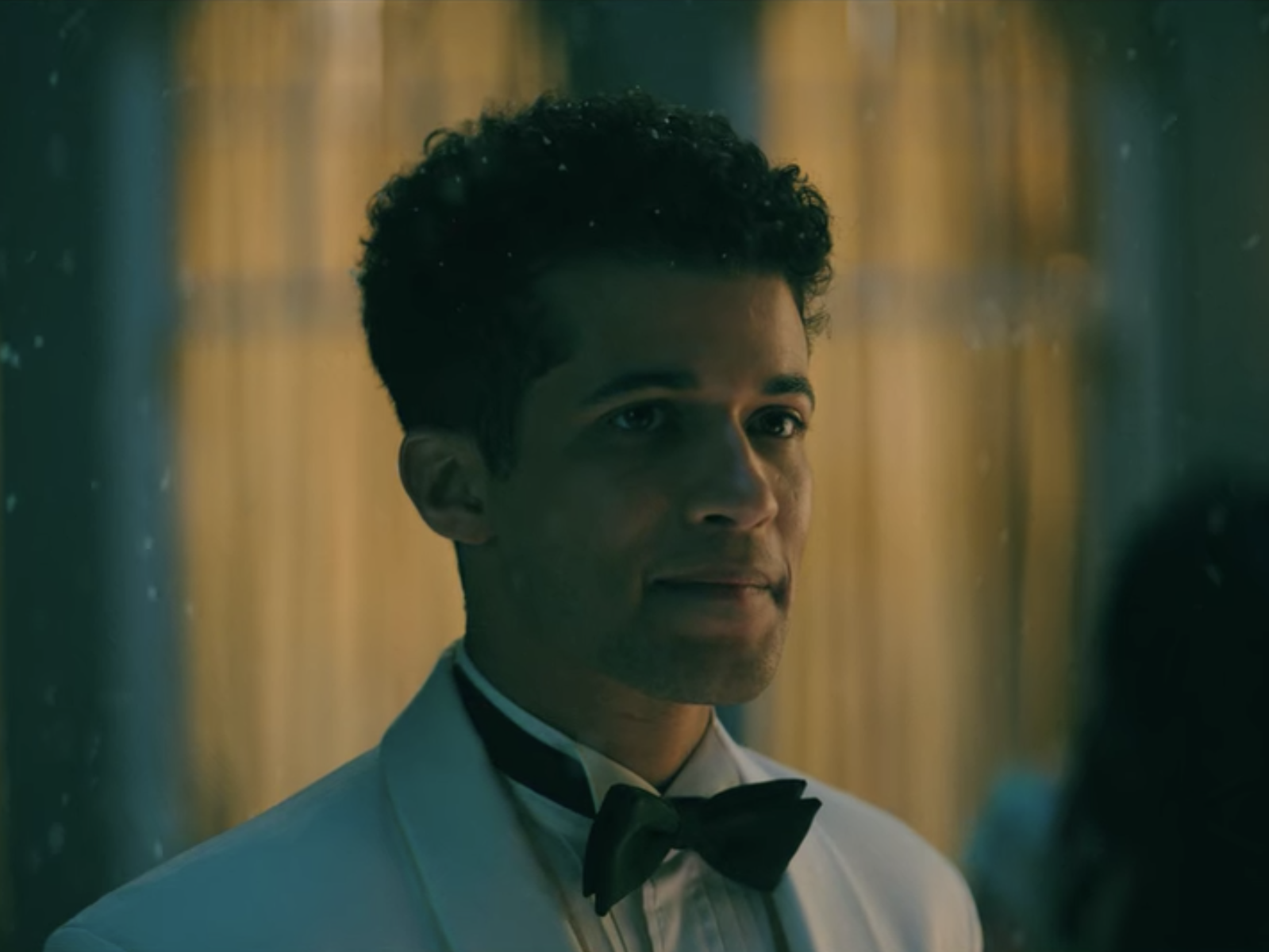 NetflixJordan Fisher as John Ambrose McClaren in ‘To All the Boys: P.S. I Still Love You.’

John Ambrose McClaren (Jordan Fisher) was a childhood friend of Lara Jean and Peter and another love-letter recipient in the first movie.

He writes Lara Jean back at the start of the second movie, and the two meet again when they both start volunteering at the same nursing home.

It’s clear that he has a crush on Lara Jean, who he doesn’t initially realise is already with Peter.

When she and Peter briefly break up, John dances with and kisses Lara Jean at the Star Ball they throw for the nursing home.

The kiss makes her realise that she wants to be with Peter, and John’s movie storyline ends after this rejection.

Trevor makes his first appearance in the second movie. 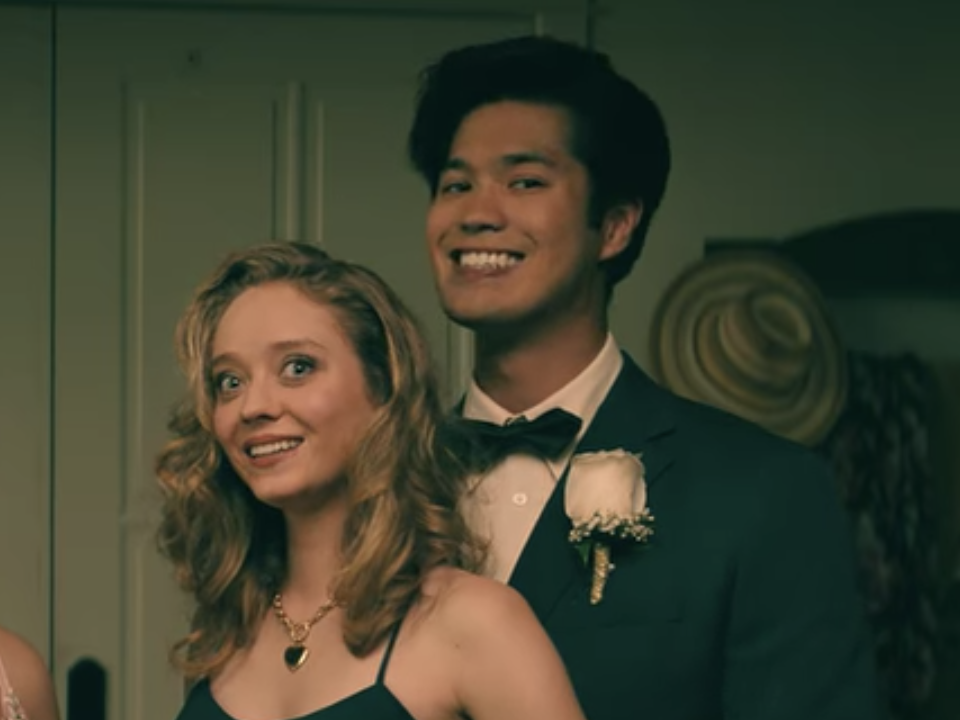 Trevor (Ross Butler) is first introduced in the second movie as one of Peter’s friends.

He and Chris start to show an interest in each other during a party and again over lunch in the woodshop classroom.

In the third movie, he enlists Lucas’ help in asking Chris to prom, which involves a surprise bouquet of Subway sandwiches.

The couple goes official after prom, but Chris says it’s only until she leaves for Costa Rica. 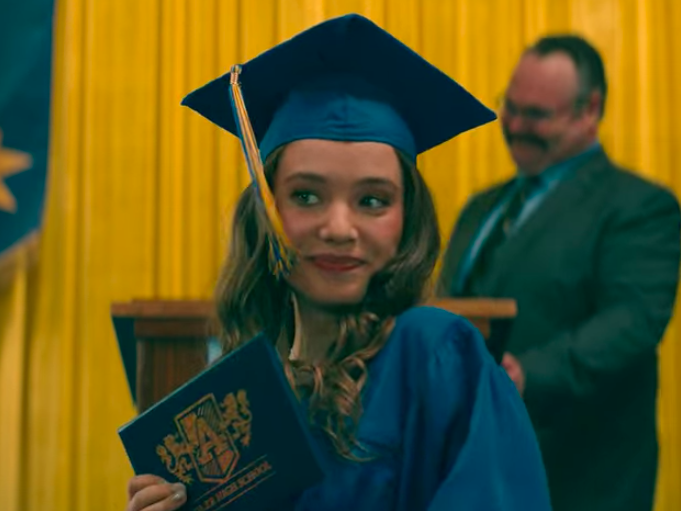 NetflixEmilija Baranac as Gen in ‘To All the Boys: Always and Forever.’

Genevieve (Emilija Baranac) is Peter’s girlfriend at the start of the series.

She’s also Chris’ cousin and Lara Jean’s childhood best friend, but she holds a grudge against the latter because she kissed Peter during a middle-school game of Spin the Bottle.

Though she’s rude to Chris and Lara Jean at first, and even vengefully posts the hot tub video of Peter and Lara Jean online, she starts to be more friendly with everyone during the second movie.

After having a heart-to-heart with Lara Jean in their old treehouse, Gen explains that she’ll respect her relationship with Peter as long as she’s still allowed to be his friend.

Her friendly streak continues in the third movie when, much to everyone else’s surprise, Gen is nice to both Lara Jean and Chris. The girls even attend an NYU party together during their senior trip to New York.

Both Gen and Lara Jean head off to NYU after high-school graduation.

Chris has a boyfriend and a better relationship with her cousin at the series’ end. 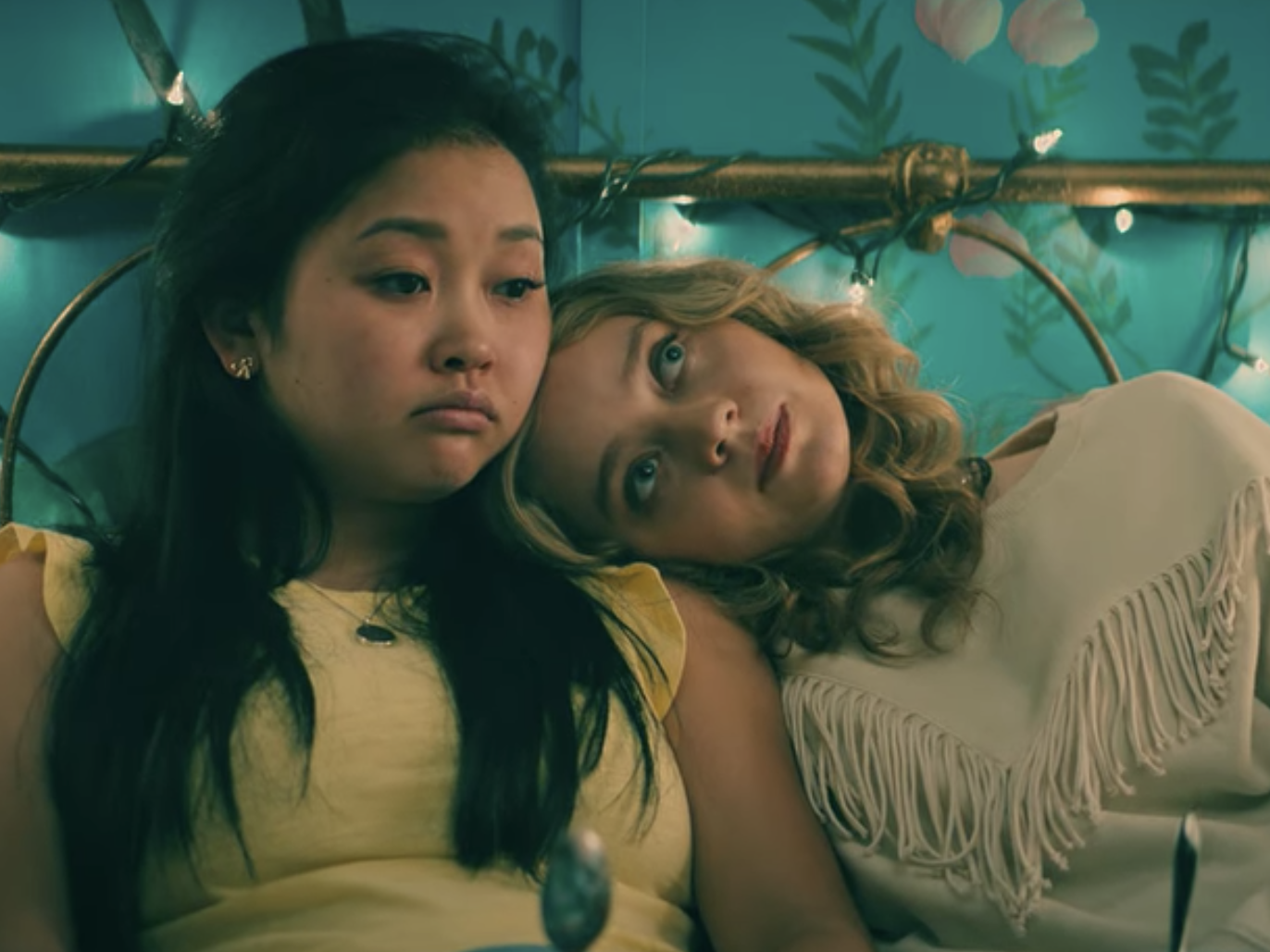 NetflixMadeleine Arthur played Chris in the ‘To All the Boys’ series.

She encourages Lara Jean’s relationship with Peter and exchanges insults with her cousin, Gen, whenever she gets in the couple’s way.

During the second movie, she starts to show an interest in Trevor, and the two begin an on-again, off-again relationship.

After bonding with Gen during their trip to New York, the cousins are friendly with each other.

Throughout the series, Chris is a steadfast friend to Lara Jean, and she jokes that they are in “the darkest timeline” when she makes things official with Trevor the same night Peter and Lara Jean break up.

Unlike the rest of her friends who are off to college at the end of the series, Chris plans to move to Costa Rica. 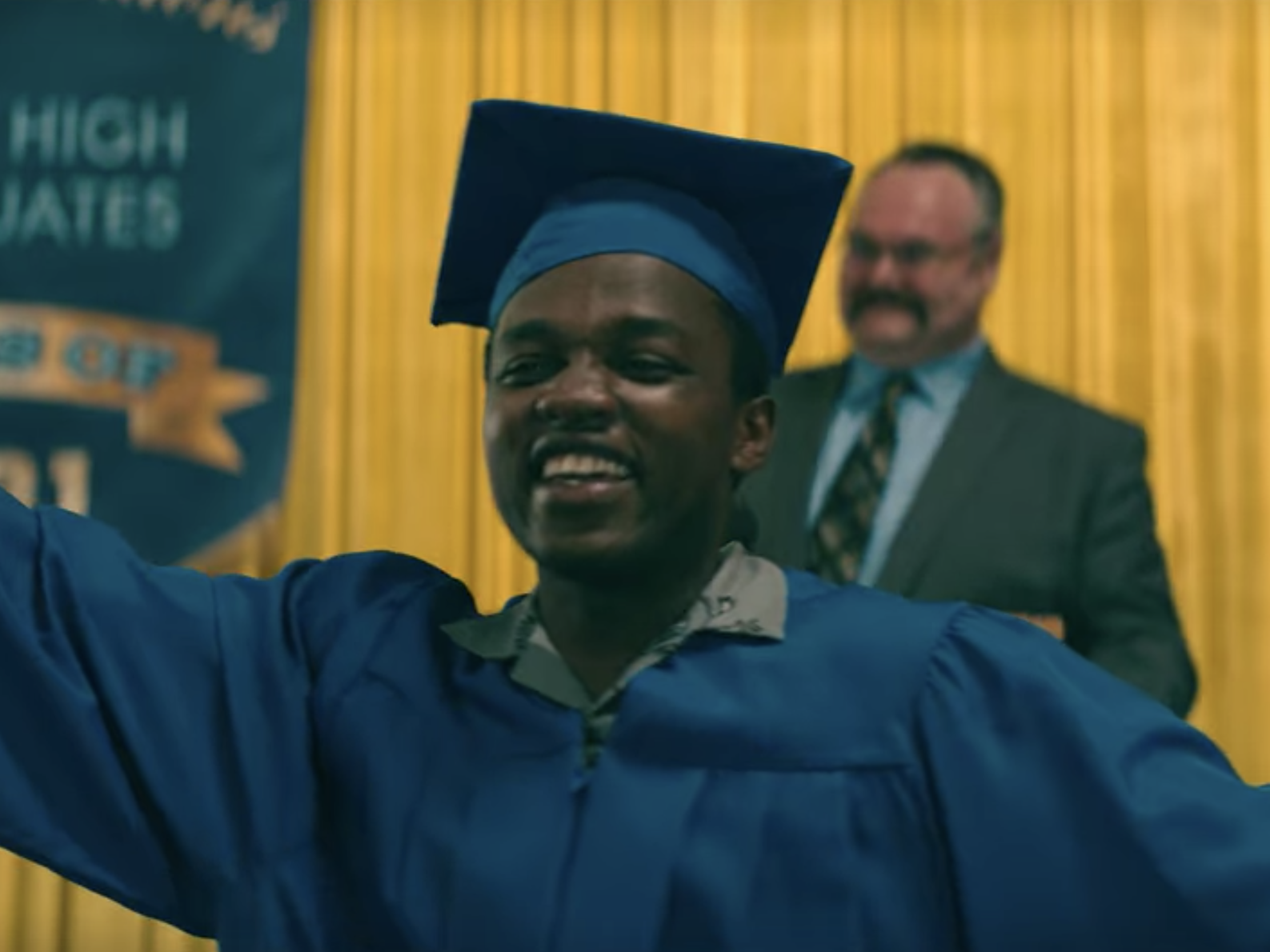 NetflixTrezzo Mahoro as Lucas in ‘To All the Boys: Always and Forever.’

Lucas (Trezzo Mahoro) also receives one of Lara Jean’s love letters in the first film, which she wrote after they danced together at freshman homecoming.

He kindly approaches her about the letter and tells her that he’s gay.

After that, the two become close friends, Lucas was even the first person to learn the truth about Peter and Lara Jean’s “fake” relationship.

In the third movie, he plans to go to Sarah Lawrence for college and tells Lara Jean he’ll only be a two-hour train ride away from her at NYU.

Dr. Dan Covey goes from a single dad to a new husband. NetflixJohn Corbett played Dr. Covey in the ‘To All the Boys’ movies.

Lara Jean’s dad, Dr. Dan Covey (John Corbett), is single in the first movie because he never remarried after his wife’s death.

He’s supportive of his daughters throughout the series, and he gets along with Josh and Peter as well.

In the second movie, after Kitty sends their neighbour, Trina, a Valentine and signs it from her dad, the two start dating.

Dan takes his family and Trina to Korea at the beginning of the final movie, and he proposes to Trina when they get home.

The two get married at the end of the last movie. NetflixSarayu Rao as Trina in ‘To All the Boys: Always and Forever.’

Trina Rothschild (Sarayu Rao) starts out as the Covey’s neighbour, but after Kitty successfully match-makes her with Dan in the second movie, she becomes part of the family.

Lara Jean helps her dad ask Trina out by inviting her to their “Fakesgiving” dinner, and the budding couple’s connection grows throughout the movie.

After asking his daughters for their blessing, Dan proposes to Trina in the third movie, and she moves into their house.

At first, tensions run a little high when Margot returns from college and doesn’t know Trina well enough, but the two end up forming a bond before the couple’s backyard wedding.

Margot’s arc focuses on her family. 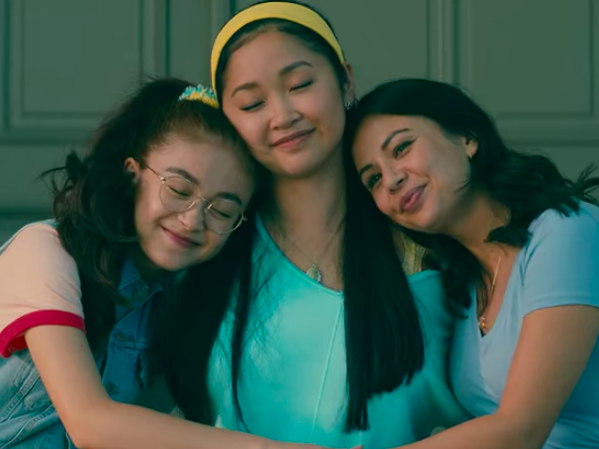 Lara Jean’s older sister, Margot (Janel Parrish), leaves to attend college in Scotland at the start of the first movie.

After she’s gone, Lara Jean dodges her calls to avoid telling her about Josh and Peter. But when she returns and finds out, the sisters get into a fight.

Lara Jean and Margot patch things up while Margot is home for Christmas break, and all of the sisters get along during their trip to Korea.

In the third movie, Margot is a bit bothered by her dad and Trina’s engagement, especially when Trina begins to redecorate their house, but she soon realises how happy Trina makes her father. 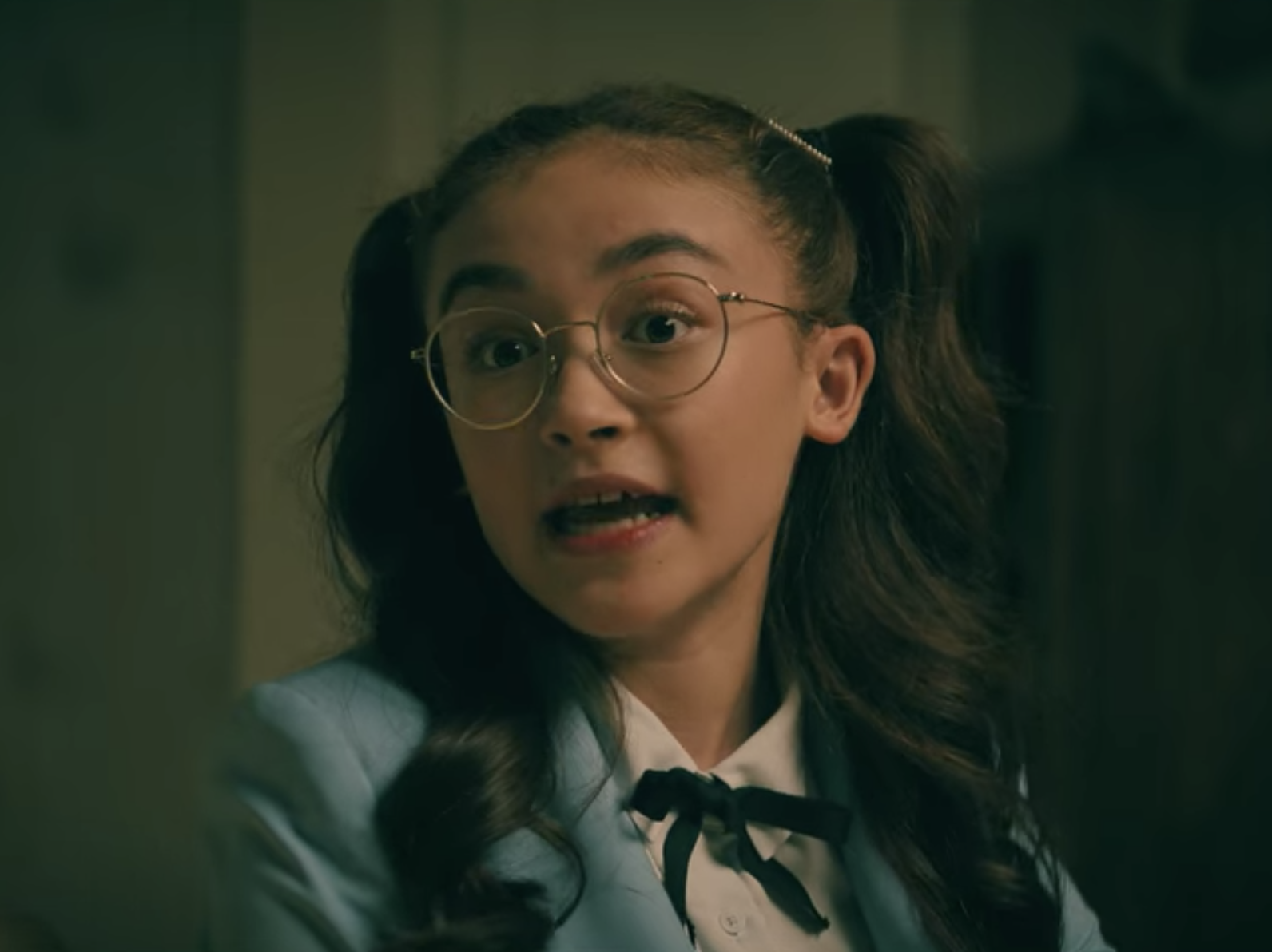 NetflixAnna Cathcart as Kitty in ‘To All the Boys: Always and Forever.’

Kitty (Anna Cathcart) is the youngest Song-Covey sister, and throughout the series, she’s mischievous and brutally honest with her family.

She’s the one who sends Lara Jean’s love letters out in the first movie, but she also saves all of Lara Jean’s discarded love notes from Peter, which brings the sisters back together.

In the second movie, she decides to get her father and their neighbour, Trina, together – another successful match.

During the last movie, Kitty meets a boy in Seoul and starts a long-distance relationship with him while also helping plan her father’s wedding and getting Lara Jean and Peter back together.

Peter’s relationship with Lara Jean changes throughout the series. 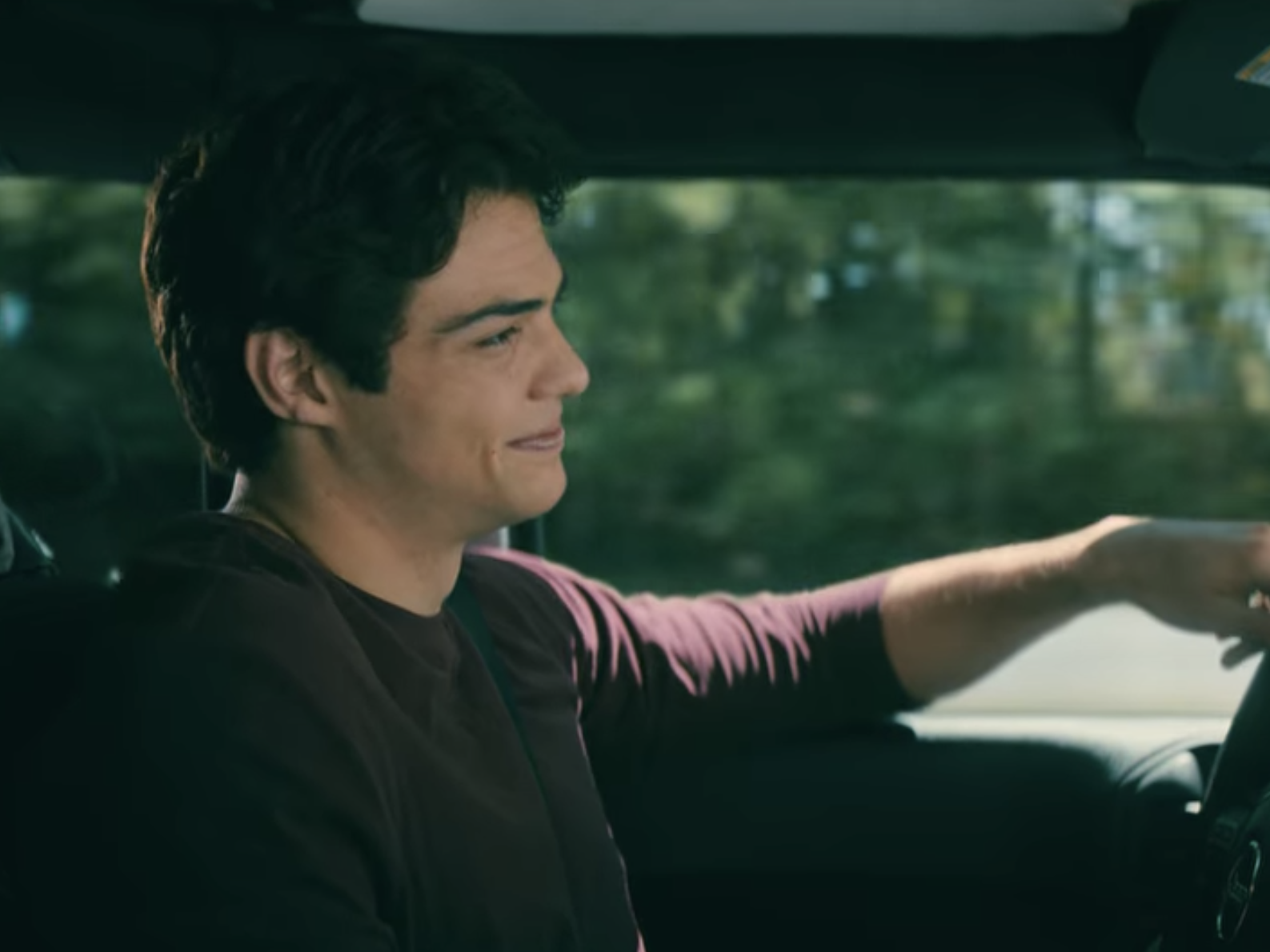 NetflixNoah Centineo played Peter in the ‘To All the Boys’ movies.

Peter (Noah Centineo) is Gen’s boyfriend at the start of the series, but he agrees to start a fake relationship with Lara Jean when Gen dumps him.

He ends up falling in love with Lara Jean, and the two officially start dating at the end of the first movie.

They patch things up and start the third movie as strong as ever. But when college-decision time comes around and Lara Jean doesn’t get into Stanford – where Peter’s going on a lacrosse scholarship – their relationship is put to the test again.

They break up after prom because Peter thinks Lara Jean is trying to distance herself from him, but Kitty helps bring them back together by the end of the movie.

Even though they end up going to college on different coasts, Peter and Lara Jean decide to try and make long-distance work. 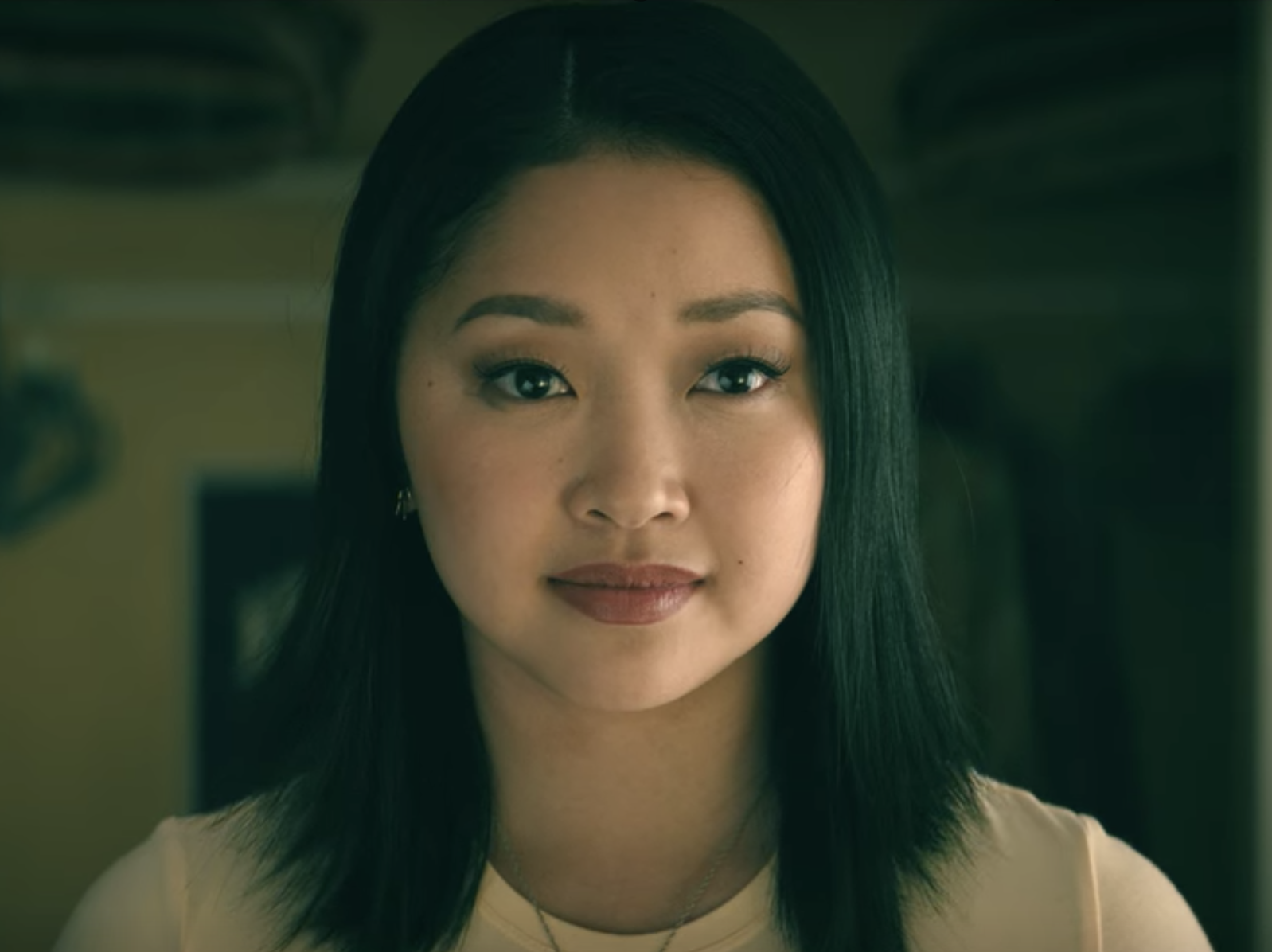 NetflixLana Condor as Lara Jean in ‘To All the Boys: Always and Forever.’

Lara Jean (Lana Condor) starts the series as a hopeless romantic who has a secret crush on her sister’s boyfriend.

But after Kitty sends out several love letters she’s written to past crushes, Lara Jean is thrown into different love triangles.

Her relationship with Peter, though fake at first, helps her realise how messy real relationships can be. But after run-ins with Josh in the first movie and John in the second, she realises just how much she loves Peter and wants to be with him.

In the third movie, the support she gets from her sisters, father, and Trina, encourages her to pursue both Peter and her own dreams. And by the series’ end, she’s gained several close friends and decides to attend NYU, even though Peter is going to Stanford.

They decide to try and make things work and, as Lara Jean mentions during the series’ closing line, the 3,000 miles between her and Peter are an excellent reason for the couple to write each other more love letters.