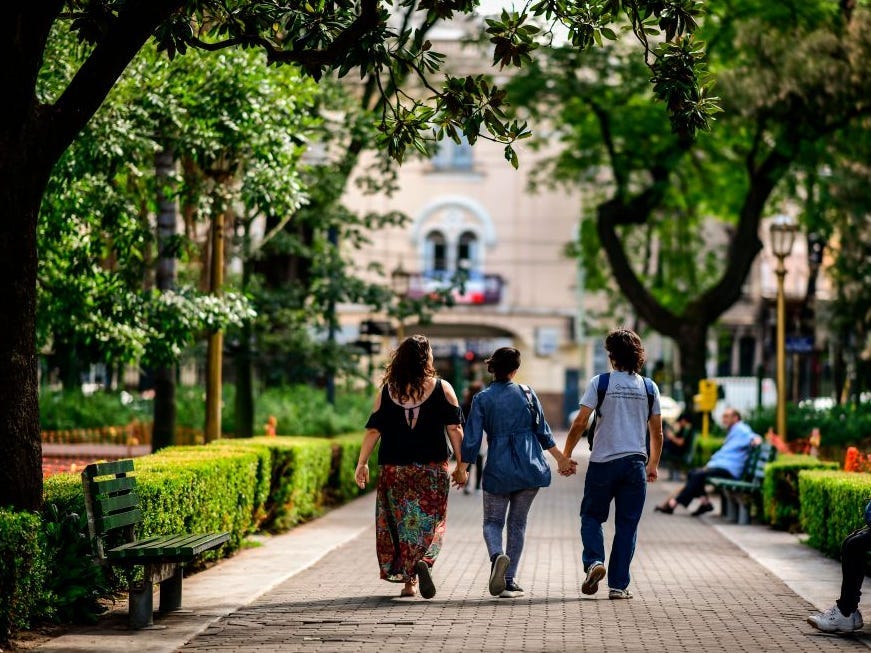 Dating during the pandemic has presented complications for many, but polyamorous and non-monogamous people, in particular, have had a rough go at things.

Across the globe, countries put out advisories on how or if people could have sex without risking contracting COVID-19 â€” most of them calling for people to shack up with one significant other or go it alone.

On March 23, New York City health officials told residents they were their own safest sex partner for lockdown. Two days later, the British government told couples to “test the strength of their relationship” and live together for lockdown or quarantine separately. Dutch officials suggested people shack up with a single “sex buddy” to ride out lockdowns in May.

Even as rates of COVID-19 drop in some places and people can loosen up and have socially distant hangouts, experts are still advising them to limit their dating pool to no more than one person.

“This is really not a time to have multiple partners, especially if you’re going to be doing anything that involves taking off the mask,” Dr. Sandra Kesh, an infectious disease specialist and Deputy Medical Director at WestMed, told Insider.

But for many people, only seeing one person is not organic, healthy, or what they need to feel fulfilled.

“I think it’s about harm reduction in the terms of it being sustainable to social distance,” Ken, a polyamorous person located in Spokane, Washington told Insider. “It’s a lot to ask non-monogamous people to not be with all of their partners, and for mental health, it just is not sustainable.”

Insider spoke to several polyamorous and non-monogamous people about how they are keeping themselves safe during the pandemic.

A Tulane University senior, who has omitted their name to protect their privacy, told Insider they’re used to keeping a rotation of three to five people at a time.

When the pandemic was declared in mid-March they stopped seeing people, relocated to California for the summer, and did coronavirus research for a highly ranked university. But when they returned to New Orleans in August, they gave it two weeks and decided to contact their old Tinder hookups and friends with benefits.

This is in large part because Tulane requires its students to get tested for COVID-19 twice a week.

“I feel a lot more comfortable hooking up with multiple people because I know that I have my results and I’m getting tested twice a week on Tulane’s dime,” they told Insider.

While testing isn’t foolproof, they told Insider it allows them to have the most up to date information about their COVID-19 status and provide it transparently to their three current partners.

Ri (they/them) and Ken (he/they), a poly couple located in Spokane, Washington, told Insider they also rely on testing to keep themselves safe.

Ken started seeing his partner Angie in early August when restrictions on social distancing began to loosen up. Because Angie has four partners and Angie’s spouse additionally has multiple partners, everyone in the polycule â€” people involved in the polyamorous dynamic â€” has to get tested for COVID-19 once a week.

“Everyone within the polycule has to get tested regularly to make sure we’re all safe,” Ken told Insider.

New York City put out guidelines in June on how people could reduce their risk of infection during sex, like wearing masks, doing positions like doggie style or rider positions, and avoiding swapping fluids by performing anilingus or kissing.

While they don’t wear a mask during sex, the Tulane student told Insider they try to follow the advisory to limit the exchange of fluids with their partners to reduce their risk.

“I try not to kiss people or eat a—,” the Tulane senior told Insider. “Like I’m only like kissing one person that I’m hooking up with because I know they’re safe.”

Because they live on-campus and aren’t allowed to have guests in their rooms, they meet their partners elsewhere to reduce their building’s risk of any exposure, like their partner’s houses or public places.

They once even got caught having sex in Audubon Park, a public park located across the street from Tulane.

Like discussions within polyamorous and non-monogamous dynamics prior to the pandemic, boundaries and expectations are incredibly important to set before adding a partner to a polycule or rotation of people.

The 21-year-old Tulane senior told Insider they are fully transparent with each of their sexual partners about the number of people they’re having sex with and how many people they generally interact with.

“I let them know that they’re not going to be like the only person in my life that I’m involved with sexually because I feel gross if I keep people in the dark,” they said. As of early August, no one in their rotation has tested positive for COVID-19.

Ri and Ken had talked about exploring a polyamorous dynamic after a year of dating before the pandemic was declared, but it was only in August 202o that they started practicing it. Ken had been friends with Angie for years before the two reconnected and started talking, which bloomed into a relationship.

“Ken was definitely very intentional and being like, making sure I knew that they would wear masks during dates, they would be socially distanced, telling me whenever they planned on actually going over to Angie’s house,” Ri said. “We’re super talkative with each other about those things.”

How a polyamorous relationship expert is dating during the coronavirus, and what she advises non-monogamous clients