I'm a working mum whose pandemic-related layoff brought all my old anxieties to the surface. Here's how I got them back under control quickly. 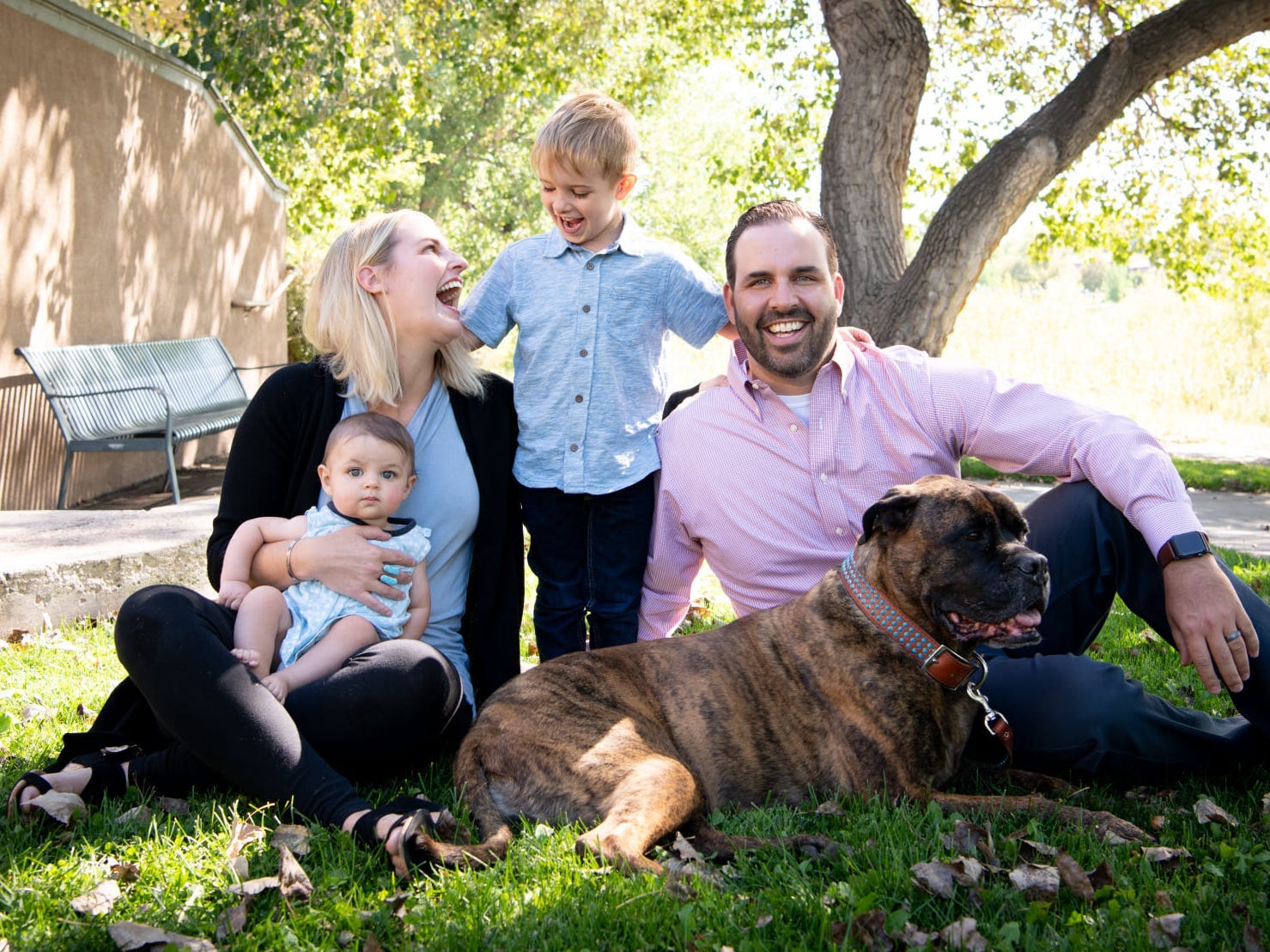 I stared into my laptop, struggling to hear my manager on Zoom while my 5-year-old son sang loudly next to me. After missing St. Patrick’s Day at pre-school during the stay-at-home order, Santiago insisted the holiday was today, and he was making a “leprechaun trap” from pencil and string.

“We have to make some hard decisions,” my manager was saying, his face piqued.

“Please use your inside voice,” I said to my son.

I caught a few phrases. “Twenty per cent of the staff,” my manager said. “Official last dayâ€¦”

I was being laid off. And the first feeling that flooded me wasn’t dread. It was relief.

It was late March. My husband, an equities trader, had been deemed an essential worker in finance, which left me to work at home alone with our son and 1-year-old daughter. After failing to get much done for my marketing job while my daughter crawled around opening cabinets and my son demanded I colour with him, I’d been writing and editing copy mostly at night, falling asleep at my computer. I couldn’t imagine continuing to squeeze eight hours of work into the bits of time between cooking spaghetti, singing, “Itsy Bitsy Spider,” and watching my son ride his bike.

But I had no idea how we would pay our bills without my salary. As my manager explained that this would be my final day of work, panic started to take hold.

Before I’d had children, I’d been diagnosed with adjustment disorder, which means that big changes can trigger bouts of depression.

I’d learned to manage them using a toolkit of counseling, exercise, meditation, and cognitive behavioural ways of separating myself from anxious or hopeless thoughts. Becoming a parent made it challenging to keep up these habits, but now, in the midst of the pandemic, it seemed impossible.

Before, a foundation-rocking wave would come along only occasionally â€” the death of a loved one, a move to a new city, a car accident â€” but these jarring changes ultimately passed. COVID-19 was a never-ending set of towering waves. Just as I regained my balance from one, another was upon me. How would I fulfil my financial obligations without childcare? How would we stay safe? When would the kids see their grandparents? Would my son Santiago be able to start kindergarten in the fall?

And now this. How would I provide for my children without a job? I closed my laptop. Turning to Santiago, I blinked back tears.

“Mummy,” he cried as the pencil fell, “This won’t work! The leprechaun will escape!”

Looking at my son’s tawny-brown hair and wide eyes, the tears suddenly began to spill down my cheeks. A question formed on his face. I was too fatigued to make anything up. “I lost my job,” I said. Immediately, I regretted the words.

His eyes filled with fear. “Are we going to lose our home, Mummy?”

On one pre-COVID morning, infuriated by his refusal to put on his shoes, I told him that we had to leave because if I was late to work, I could lose my job, and if I lost my job, we could lose our house. I felt sick remembering this now.

Unconvinced, Santiago dropped the broken leprechaun trap onto the floor. “Will we have to live on the street?”

I managed to calm his fears, and soon we were building a fort with pillows while his sister continued to nap upstairs. But with each pillow I helped him place, the panic in my chest blossomed.Unemployment won’t cover our expenses. No one is hiring. We really will lose our house.

The word “never” should have tipped me off to the presence of my least favourite alter-ego: Hopeless Bag Lady.

Years back, a counselor recommended that I personify what in psychology they call “protective defence mechanisms,” or habitual reactions to challenging circumstances. I’d loved the idea, and the loudest one already had a name. My best friend Stephany had made it up when, during a post-college funk, I complained that I’d never get anything published. “Oh, come on,” she replied, “That’s just the Hopeless Bag Lady â€” don’t listen to her.” I had three alter egos now. Hopeless Bag Lady was a defeated woman who had given up, Worry Wart darted around with a disaster-preparedness clipboard, and Wicked Stepmother berated me for mistakes.

For nearly a decade, thinking of these characters as a misguided trio of relatives had helped me notice negative thoughts and set them aside. The characters made their appearances, but I didn’t give them much stage time.

Yet during the first weeks of COVID-19, between writing marketing ebooks and making sure my toddler didn’t launch herself off the staircase, it was all I could do to brush my teeth, much less monitor my feelings. After the Zoom layoff, Hopeless Bag Lady stepped onto her tattered podium in my mind. Worry Wart stood at attention, clipboard in-hand, and I began scrawling to-do lists for worst-case scenarios.

The day after my layoff, I was so distracted by the doomsday vortex that when a package of masks arrived in the mail, I hurriedly opened the bag with scissors and accidentally sliced the ear-loops of every mask. Later that week, my husband and I took the kids to a state park an hour from our Denver home. But when we arrived, I discovered I hadn’t brought a single diaper. Instead of taking a much-needed hike, we ate our sandwiches in the parking lot and climbed back into the car.

As my husband drove, I stared at my hands, lost in thought. Wicked Stepmother had the mic: What an idiot â€” I can’t even remember a goddamned diaper, much less how to function in a global pandemic.

“What are you thinking about?” my husband said, glancing at me from behind the wheel.

“I’m just trying to collect myself,” I said. Anthony put his hand on mine and squeezed. I entwined my fingers with his and looked out the window at the wild grass, willing myself to separate fact from feeling. I felt scared, but that didn’t mean we were doomed.

But as we drove home in an almost peaceful silence while the kids slept in the backseat, a truth appeared like a deer in a clearing: I didn’t want to return to the way things were.

I didn’t want to drop the kids off in two separate places, board a train, and spend hours a day commuting to an office job. Since the beginning of the pandemic, I’d been stressed, but I’d also watched my son ride his bike without training wheels and seen my daughter stand unassisted for the first time. In the car, I began toying with the idea of starting my own business. By the time we pulled into our driveway, I was jotting my company name onto a napkin.

In May, I spent my daughter’s naptime emailing friends and former colleagues to let them know I was doing independent content marketing consulting. When my alter-egos piped up to criticise me or express doubt in my ideas, I thanked them for sharing and kept going, anyway.

I got a few projects for June, and so I could do them, I sent my son back to private preschool and hired a babysitter for my daughter (privileges that did not escape me). By late July, I had more business than I could handle. Take that,Hopeless Bag Lady. But how would I work if Santiago’s school went remote and the baby’s daycare closed due to COVID-19? When our district announced kindergarten would begin in-person, I was relieved. But then, worry cropped up again when I awoke one late-summer morning. What if the kids get the virus?Worry Wart shouted. What if I get it? We’ll die and the kids will be orphans!

I jumped out of bed. Quiet! I said in my mind, as if addressing a room of unruly children. I hear you. Now, let’s go outside. I walked through our neighbourhood while my family slept. As I passed pine trees and flower gardens, I mentally ticked off a list of facts: Local positivity rates and hospitalizations were down, treatment had improved, and the death rate was plummeting. But what if infection rates go up?Worry Wort prodded. Then, we’ll figure it out, I shot back.

I thought, then, of my great-grandmother Blanche Brodie, who was bedridden with encephalitis from the Spanish Flu in 1918. Her doctors thought she would die, but she lived to raise my grandmother and help raise my mother. My wedding band had belonged to her, and as I rounded the corner toward my house, I looked at the glittering diamond purchased for her marriage during the Great Depression. If she got through a global pandemic, a depression, and two world wars, my family could get through this. 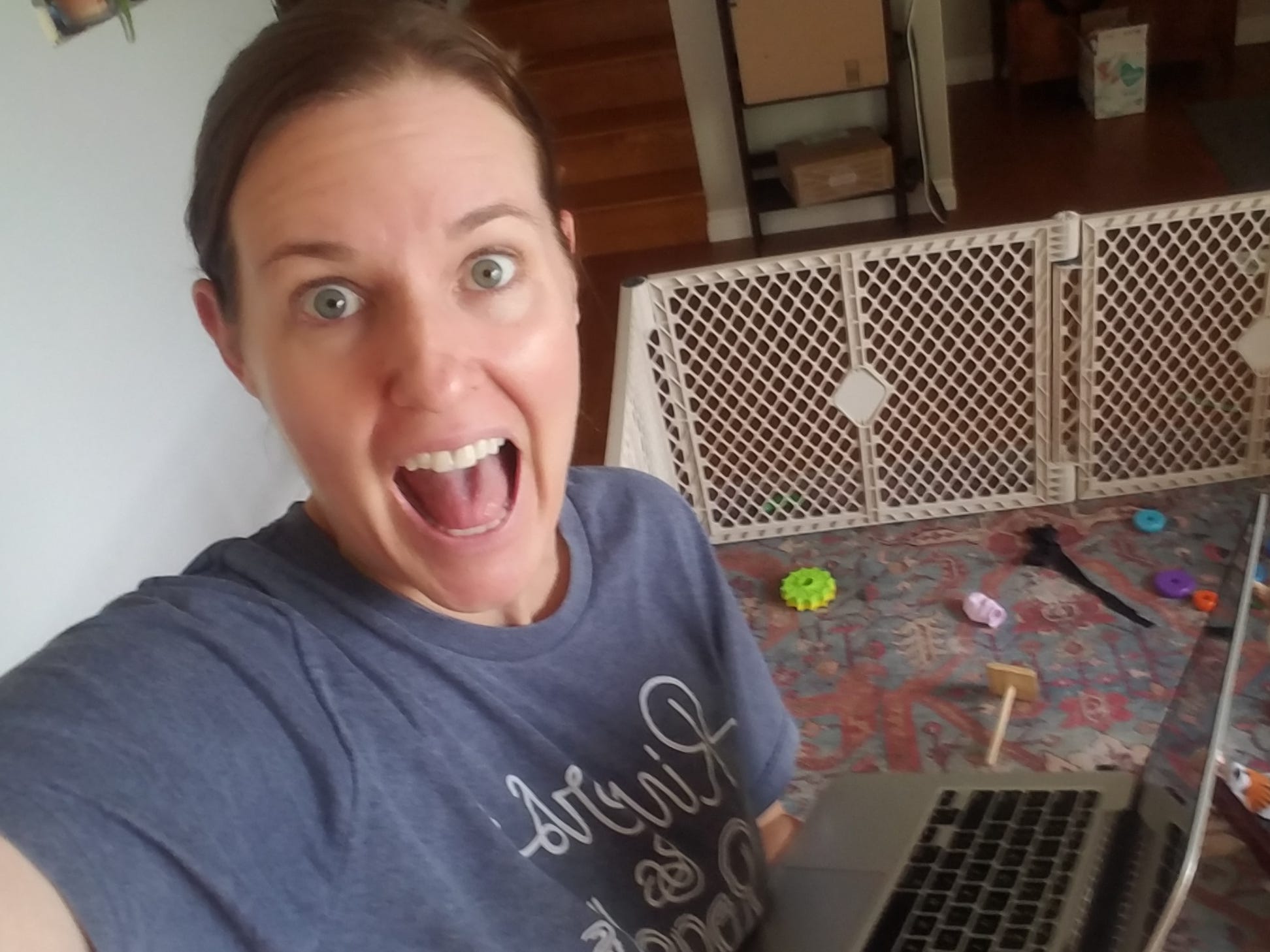 Courtesy of Megan Feldman BettencourtThe author, working amid chaos at home with her family.

In mid-August, I brought Santiago to his first day of kindergarten. “I’m shy!” he told me suddenly, grabbing my hand and shrinking back from the other families.

Sensing an opportunity to share with him what I continued to learn myself, I crouched down and looked into his hazel eyes.

“You feel shy, like everyone does on the first day at school,” I said. “But that doesn’t mean you are shy.”

He nodded, donned his new animal-print mask and gave me a hug. Then he followed his teacher inside.

Megan Feldman Bettencourt is the author of Triumph of the Heart: Forgiveness in an Unforgiving World. Her writing has appeared in publications including Psychology Today, Salon, Harper’s BAZAAR, The San Francisco Chronicle, and many others. Feldman Bettencourt is also a keynote speaker and content consultant.