How much sleep you need each night and warning signs that you're not getting enough, according to neuroscientists 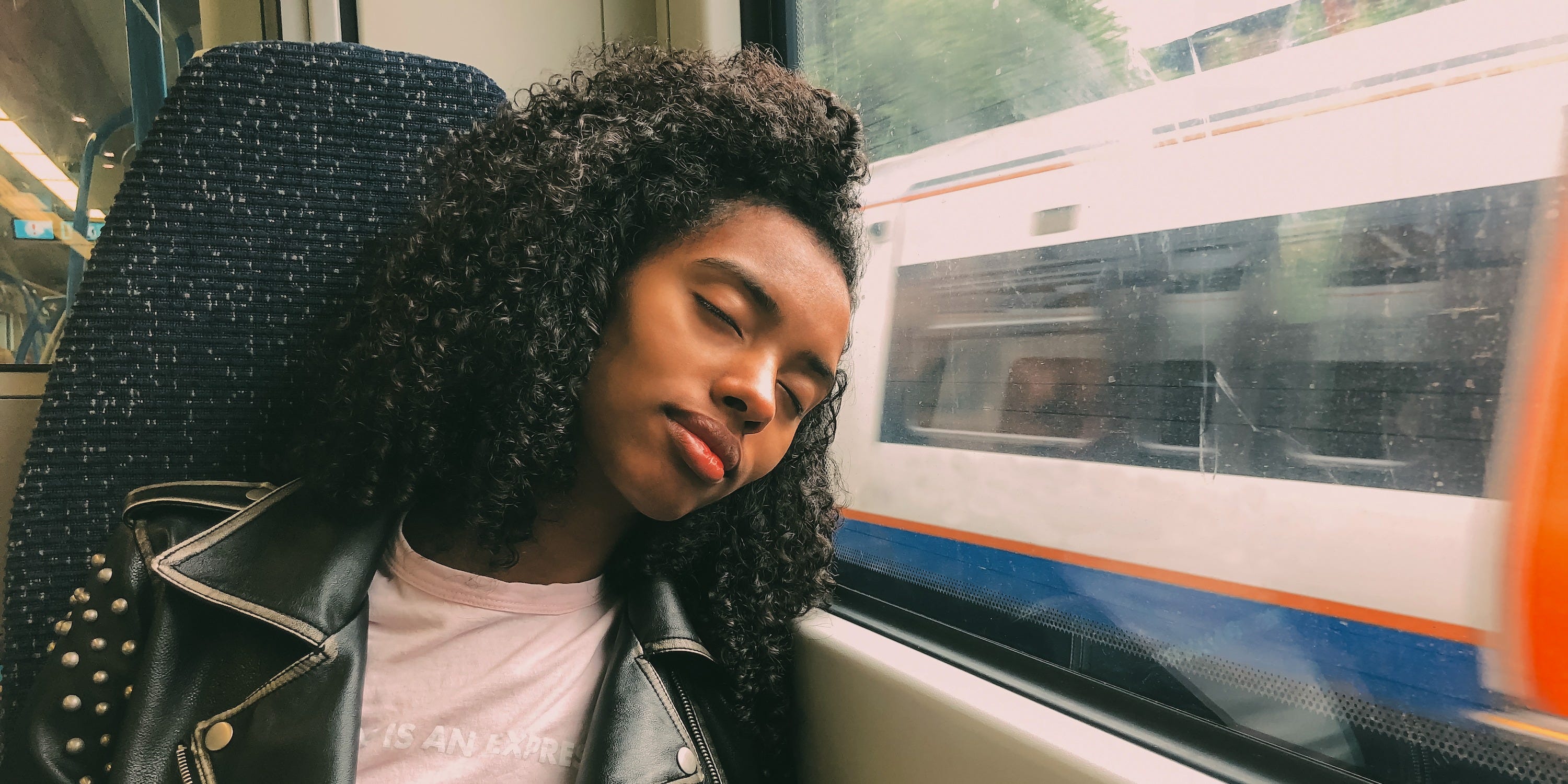 David Prado Perucha/ShutterstockIf you find yourself dozing off during the day that could be a sign that you’re getting insufficient sleep at night.

Most people spend about one-third of their day asleep. While scientists are still unsure exactly why we need sleep, they do know it rejuvenates the body and mind, making it critical for our daily functions. And a lack of sleep leads to cognitive impairments that you might not even notice, which may make it difficult to know if you are well-rested.

Ashley Ingiosi, a neuroscientist researching sleep at Washington State University, says there are a couple of indicators that you can look out for to determine if you’re catching enough zzz’s.

You fall asleep too quickly

“If you’re falling asleep within five minutes of crawling in the bed, you’re probably not getting enough sleep,” she says. Instead, it should take about 15 to 20 minutes.

You hit snooze too much

Another red flag is if you’re struggling to crawl out of bed in the morning. “If you’re hitting snooze multiple times, you’re likely not getting enough sleep.”

Ingiosi says you might need to sleep in later in order to align your sleep schedule with your circadian rhythms – the physical, mental, and behavioural changes that follow a daily cycle, like your sleeping patterns.

You feel tired throughout the day

You can take the following quiz, based on the Epworth Sleepiness Scale, to help determine if you’re getting enough sleep.

How much sleep you need

How much sleep a person needs varies by individual, but current recommendations from the National Sleep Foundation are broken down by age.

People need different amounts of sleep depending on their stage of development. Newborns, for example, need more sleep than toddlers to support the rapid growth of their bodies and brains. Here’s how much sleep each age group needs: 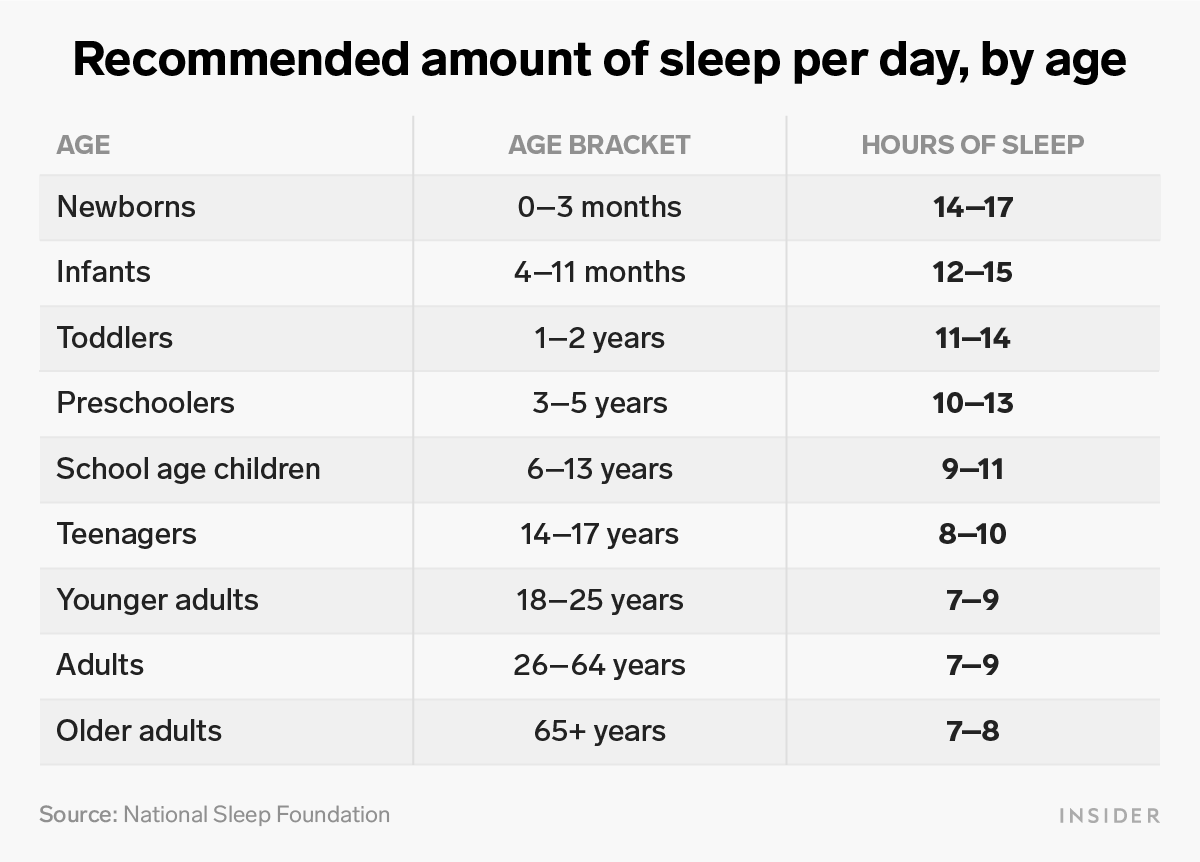 Despite the recommendation that adults sleep between seven to nine hours a night, a 2015 survey of over 300,000 people revealed that nearly 30% of respondents said they slept six hours or less most nights.

If you are wondering how many hours you need, Kate Sprecher, a neuroscientist at the University of Wisconsin Madison, says vacation is a good time to figure it out. “Give yourself the opportunity to settle into a rhythm without using an alarm clock,” she says, just keep your bedtime consistent.

Consequences of too little sleep

Sleep is vital to your overall health and plays an important role in many daily functions involving the immune system, hormone levels, and brain.

Overall, research shows sleeping increases immune system functioning. Studies have shown that patients who got a good night’s rest after certain vaccines, like the hepatitis A vaccine, produced more disease-fighting antibodies than patients who pulled an all-nighter.

We often sleep more when we are sick. That may have something to do with the fact that when your body is fighting an infection it releases proteins called cytokines. These proteins are also found in the chemical cocktail that helps you fall asleep.

Getting enough sleep not only makes us feel great, but it’s also vital for proper brain functioning. An insufficient amount of sleep is linked to neurobehavioral symptoms such as depressed mood and attention lapses.

Sleep also plays a role in weight gain. A 2011 study looked at how diet and lifestyle changes impacted weight gain in over 120,000 healthy adults. Men and women who slept less than six hours or more than eight hours gained additional weight over a four year period than those who clocked enough beauty rest.

A 2012 review of sleep studies linked chronic lack of sleep to issues with metabolism and appetite, making inadequate sleep a potential risk factor for obesity and type 2 diabetes.

Getting more and better quality sleep

There are some dangerous misconceptions about getting the right amount of sleep. Here’s what you should avoid as well as what works.

Myths about sleep debt and training

Sleep debt refers to the debt one accumulates over time if they fail to get adequate sleep. While you can eventually recover from sleep debt, studies show chronic sleep loss can take more than one or two days to resolve.

For example, in a study of 15 young men, those who skipped out on one hour or more of sleep each night needed up to nine days of sufficient sleep – about eight and a half hours per night – to recover to the point where they felt less sleepy during the day.

While this study was extremely small, both Sprecher and Ingiosi agree that you can’t pay off a week’s worth of sleep debt by sleeping in on the weekend. That’s just not how sleep debt works.

You also cannot train yourself to sleep less, even if it seems like your body is getting used to it. Even if you think you feel fine, you may have impaired cognitive function from lack of sleep. An online study of over 10,000 people who performed tests assessing short-term memory, verbal ability, and reasoning found cognitive impairments were noticeable in those who slept less than six hours a night.

They found that for those who slept four hours a night “the impairment was equivalent to adding almost 8 years to their age.” This study also noted that even one night of insufficient sleep can lead to cognitive function issues.

7 ways to improve your sleep

If you are concerned about your sleep, Ingiosi advises you to evaluate your sleep hygiene using the following guidelines:

Stick to a sleep schedule. Staying on the same schedule during weekdays and weekends keeps your natural rhythm on track.

Practice a bedtime ritual. A relaxing bedtime routine like a warm bath or reading a book “gets you in that mindset that it’s bedtime,” Ingiosi says. However, both experts say that bedtime rituals should not take place in bed-the bed is only for “sleep and sex.”

Exercise daily. Breaking a sweat will also help keep your sleep regular, just ensure that exercise does not happen too close to bedtime. Otherwise, it can make it difficult for some to fall asleep.

Take short naps. If you’re suffering from sleep debt, naps are a great way to up your sleep tally for the day as long as it doesn’t interfere with your regular bedtime. However, keep it short. Napping for more than 20 or 30 minutes causes your body to enter deeper stages of sleep, which will make it harder to wake up. “The intense grogginess is called sleep inertia,” Sprecher says, which is why some people feel even more tired after a nap.

Avoid caffeine and alcohol near bedtime. While caffeine is well known for interfering with sleep, less people are aware of alcohol’s impact. Despite its sedative effects,alcohol can impact the length of your sleep stages and decrease sleep quality.

Unplug before bed. Electronics, LED lights, and compact fluorescent light bulbs give off blue light, which can disrupt your natural circadian rhythm. Reducing your exposure to this blue light by avoiding screens a couple hours before bed or using a blue light filter, like blue light glasses, may help you sleep better.

When to see a doctor about sleep issues

If after trying these tips, you are still struggling to sleep, you may be dealing with a more serious sleep condition like insomnia or sleep apnea. Both of these conditions and other more uncommon sleep disorders can be treated by someone who specialises in sleep medicine.