QUIZ: Guess how much celebs like Madonna and Beyoncé could have banked if they had claimed for theses embarrassing accidents

They are the memorable moments that celebrities wish we would forget.

Madonna falling down the stage stairs at the Brit Awards, Katy Perry’s faceplant into a giant cake, and Beyoncé getting her hair caught in a fan right in the middle of a show.

But perhaps they could have eased the pain somewhat if they had put an insurance claim in.

Personal injury lawyers First4Lawyers have taken a look at some of the most memorable celebrity fails and estimated the many thousands of dollars some of them could be owed — and the famous people who would do better not claiming for their injuries.

So, in the spirit of “The Price is Right,” have a go at this quiz. Which celebrity insurance claims could have been “higher or lower” than their peers?

Madonna famously fell down the stage stairs during her performance at the BRIT Awards in February this year when her cape failed to untie. Had she have claimed for the accident, would she have been in line for higher or lower than $5,000? 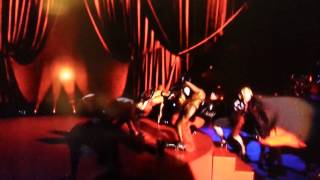 Kanye West took a nasty hit to the head when he walked into a signpost attempting to avoid the paparazzi in 2013. Would his claim be higher or lower than Madonna's $1,213? 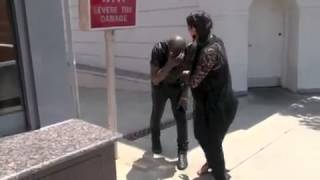 HIGHER! Kanye could have claimed $2,655. Victims of head injuries can suffer a number of symptoms such as long-lasting dizziness and headaches. Beyoncé was the epitome of a professional when her hair got tangled in a fan while performing in Montreal back in 2013. Could she have claimed for more than Kanye's $2,655? 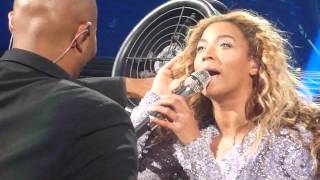 HIGHER! Hair loss accidents that result in long-term damage can lead to a 'major loss of confidence,' according to First4Lawyers, which said she could have claimed $4,248.

Keeping with the Beyoncé theme, could the star of this funny viral video of a woman dancing to 'Single Ladies' (only to smack her head on the TV) have claimed for more money than her idol's hair faux pas? 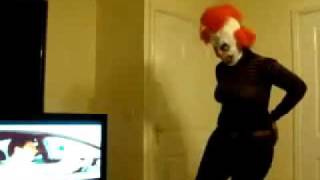 LOWER! The injury was very much self-induced, but this fail could still have earned the claimant $2,389. Poor old Biebs got a nasty jolt on stage when he tripped over his feet at a concert in Belgium. Would his claim be higher or lower than the 'Single Ladies' viral video fail? 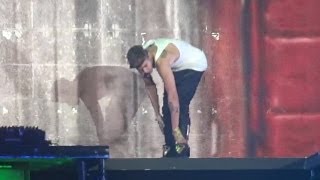 HIGHER: Justin Bieber could have put in a claim for $2,655 if it was proved that the steps were faulty.

Katy Perry faceplanted in a cake, then slipped over when she tried to start a food fight with her guitarist while performing at MTV's Latin America Awards in Guadalajara. Would her claim have been higher or lower than Bieber's? 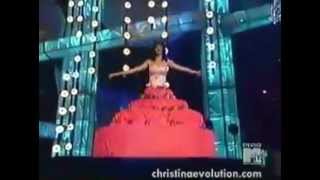 LOWER: One of the more embarrassing fails of the bunch, but Katy Perry would have only been able to claim about $758 for her series of slips. A model at Maria Lafuente's show suffered a hilariously long catwalk tumble in Madrid. Would she have banked more than Katy Perry if she had put in a claim? 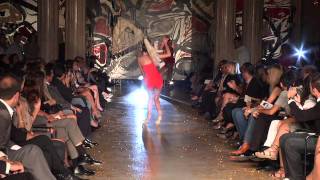 HIGHER Lafuente could have twisted her ankles, meaning she'd have to stay away from fashion shows for a while. If that was the case, she could have put in a claim for a huge $14,868.

Kourtney Kardashian got her heel stuck in the pavement and stacked it on the Walk of Fame. She was OK, but if she had suffered a more serious injury, could she have claimed for more than the wobbly catwalk model? 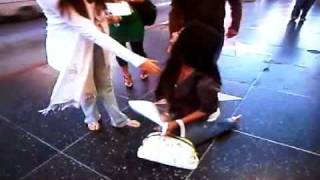 THE SAME! Kourtney Kardashian would be able to claim up to $14,868 as her injury could have left to time off work. Would Kim Kardashian have been able to claim for more than her sister for her dramatic chair fall? 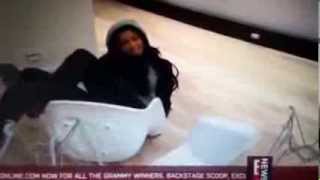 LOWER! Kim Kardashian got up straight away and seemed fine, so there's no way she could claim, according to First4Lawyers.