The Meghan Markle and Kate Middleton effect: How the royals are transforming the fashion brands they wear 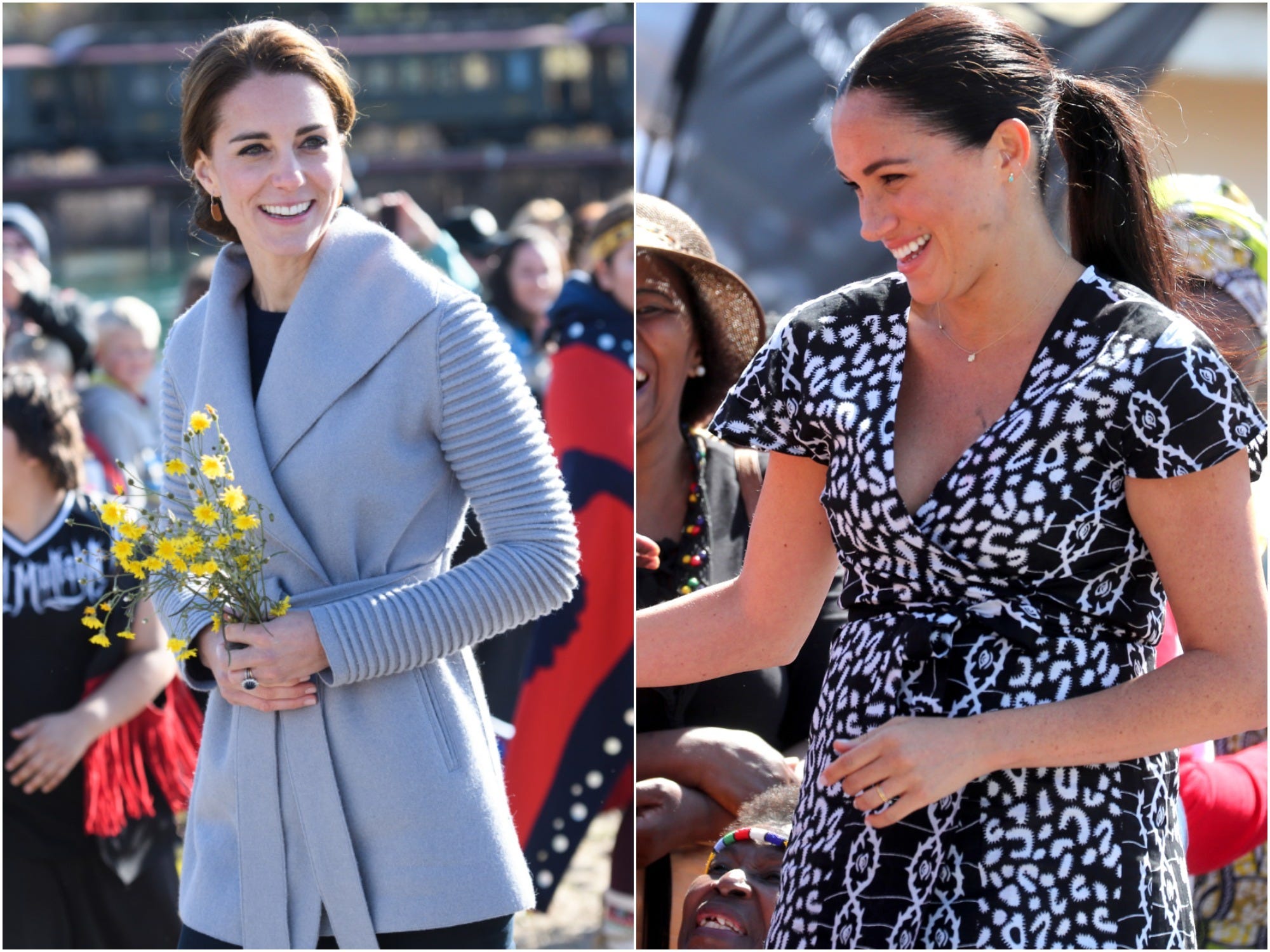 It’s the Kate Middleton effect. The Meghan Markle sparkle. Or, collectively – the royal effect. Whatever name you choose, it amounts to the same end result.

When the royal ladies step out in public, the brand they choose to wear will never be the same again.

Some brands have even named the items worn by the duchesses after them. For example, The Line coat worn by Markle during her engagement photocall has since been renamed “The Meghan,” and the personalised Merci Maman necklace Middleton wore to celebrate the birth of Prince George is now marketed as “The Duchess Necklace.”

Insider spoke to three of the royals’ favourite brands – Sentaler, Boden, and Alemdara – to find out what it’s like to have a duchess in your corner.

Markle and Middleton are known for their individual styles. As the Daily Mail puts it, Middleton is more likely to be seen wearing patterns and prints while Markle “tends to play it safe in solids.”

Therefore, it’s all the more exciting when the duchesses are photographed wearing a similar item.

Sentaler is one of the rare brands that both duchesses favour, as both have been photographed wearing the brand’s signature wrap coats.

“The day the Duchess of Cambridge appeared in Sentaler was a significant day for my company and for me personally,” Bojana Sentaler, president and creative director of Sentaler, told Insider.

“I found out about Kate wearing Sentaler from Twitter, as she was on the royal tour of Canada with Prince William and their children.” 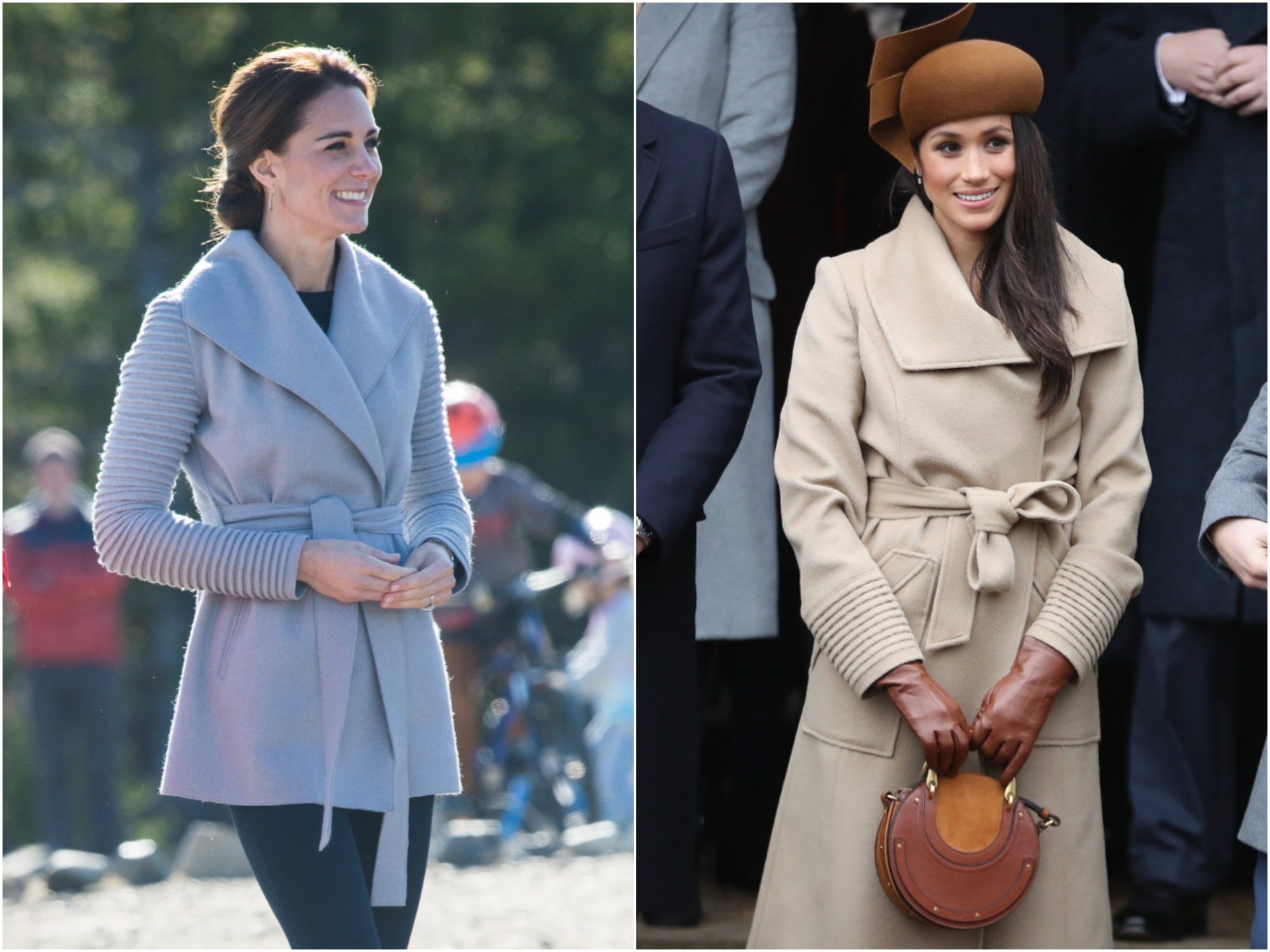 Samir Hussein/WireImage/Getty Images, Chris Jackson/Getty ImagesKate Middleton wearing Sentaler for the first time during a visit to Canada, and Meghan Markle wearing the brand at her first royal appearance on Christmas Day 2017.

She added that Middleton’s choice to wear the $US1,095 signature wrap coat with ribbed sleeves – the brand’s trademark detail – “solidified Sentler’s recognition on an international scale.”

The coat sold out instantly and went on backorder four times consecutively. It has now been nicknamed “The Kate Coat” after the duchess on Sentaler’s official website.

The Duchess of Sussex was a different story. Markle was already a fan of the brand’s coats long before she was a royal, and wore several Sentaler items during her years working as an actress on the TV show “Suits.”

So, when she wore the $US1,555 long wide collar camel wrap coat to Christmas at Sandringham in 2017 – her first official appearance with the royal family – it was less of a surprise than Middleton’s appearance.

Like with Middleton’s first royal appearance in Sentaler, Markle’s coat sold out straight away. She has since been photographed in a custom red wrap coat by the same brand. 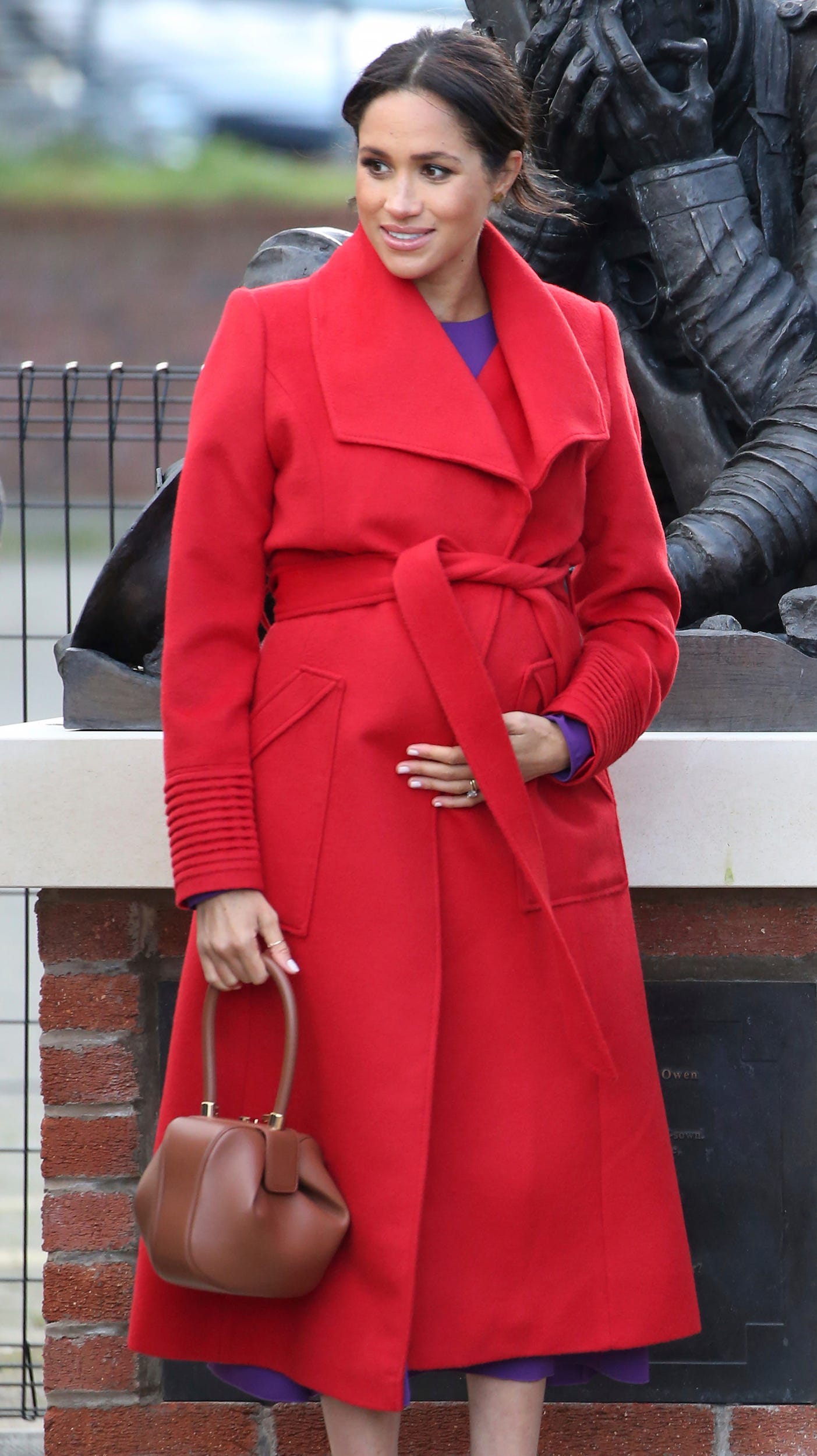 Why do both duchesses, with their unique dress sense, continue to wear the brand? According to Bojana, the answer is simple.

“The royal family’s style is traditional, classic, and elegant, which is what Sentaler stands for.”

Alemdara is a lesser-known Turkish-inspired jewellery brand, known for its hand-crafted “evil eye” necklaces and bracelets. Markle wore the $US592 Atlan necklace during her royal tour of South Africa last year, which features the diamond paved mini hand of hamsa and the evil eye symbol.

The eye is traditionally intended to “absorb any negative feeling or energy and cast it back to the person who gave it to you,” according to founder Mariella Tandy. 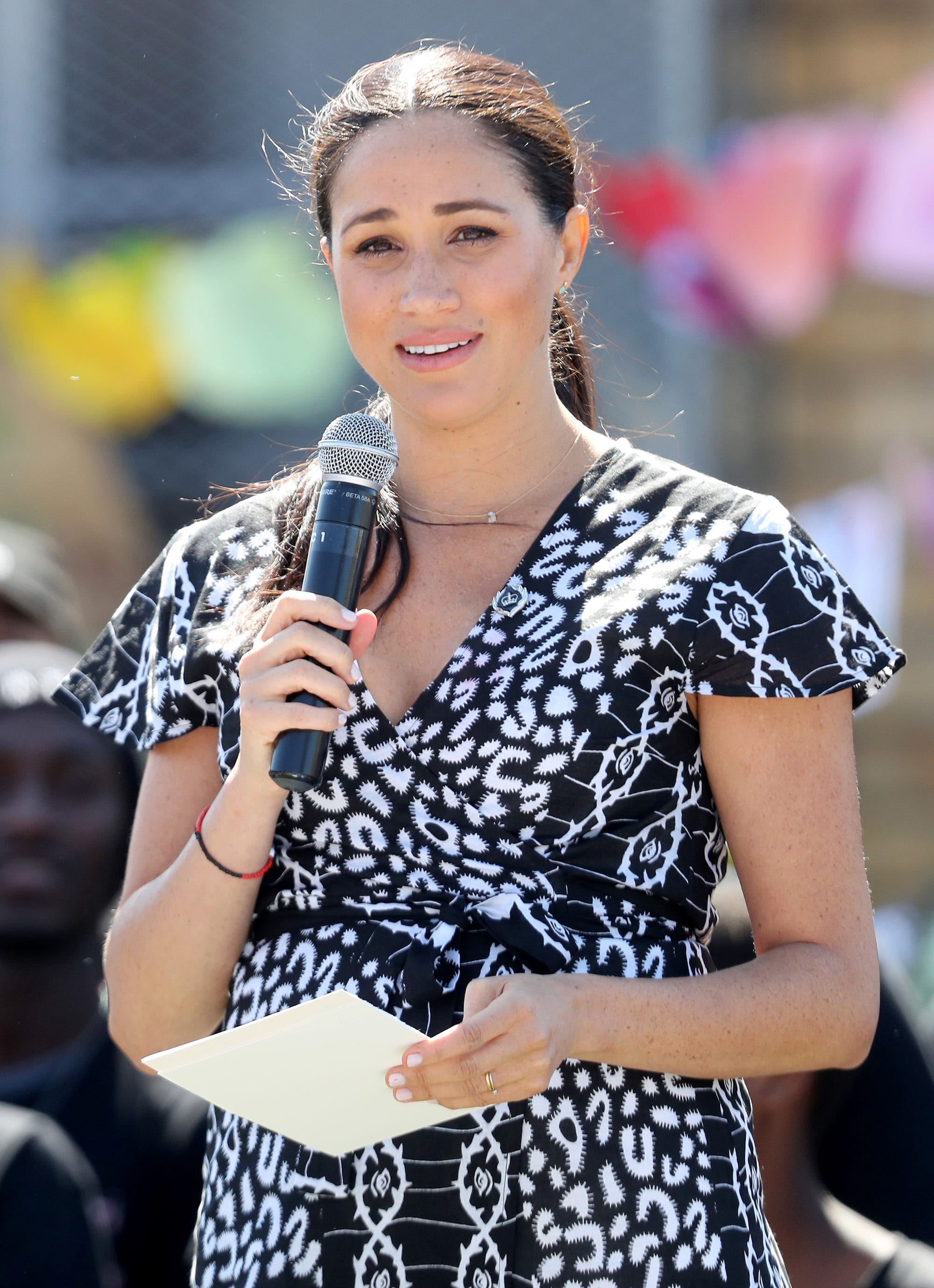 Though the necklace is now one of the brand’s most popular products and continues to be a global bestseller, it wasn’t the only item positively affected by Markle’s association with the brand.

“We are technically a small niche brand, so obviously having all this press has been amazing. We’ve had a 25 times increase in sales since the same period last year,” Tandy told Insider.

“We’ve had repeat customers, who maybe bought from us before but read about it in the press and came back to buy something else.”

Boden is another brand that has seen positive results across its entire catalogue due to its association with the royals. The clothing brand is closely associated with Middleton, who has worn a number of Boden dresses over the years. More recently, though, the royal children – including Princess Charlotte, Prince George, and Archie Harrison – have been photographed wearing Boden.

“I am so thrilled that Boden is so well-liked by the royal family. We know our customers look to the royal family for style inspiration: after the Duchess of Cambridge wore the now sold out Aurora dress on the Christmas card last year we saw searches for dresses on the website spike massively,” Johnnie Boden, founder of Boden, told Insider.

Searches for Middleton’s dresses on the Boden website increased by 18% when the image was first released last year, according to the company. She has since re-worn it for a video call engagement over lockdown, pictured below. 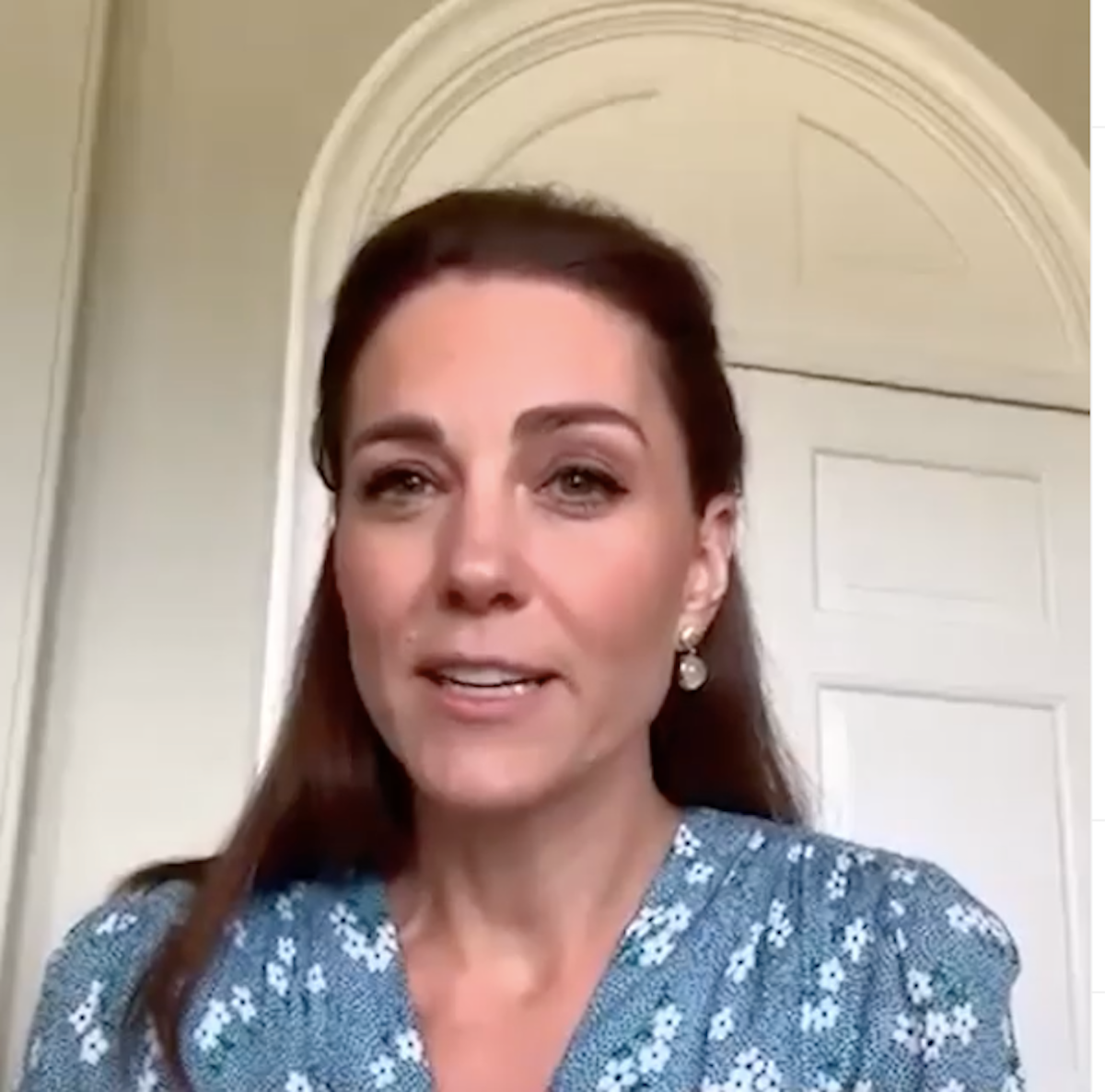 Archie wore a Boden sweater for the Sussex family’s Christmas card in 2019 – causing sales of the item to double immediately – and a Boden coat in a photo released on New Year’s Eve, which sold out swiftly after.

Just sharing the sweetest Christmas Card from our President and Vice-President, The Duke and Duchess of Sussex. Very Merry Christmas, everyone! pic.twitter.com/McOcHALoGl

Johnnie added that having the duchesses’ children wear the items transformed the way fans look at the brand.

“As our clothes are now worn by both royal parents and their children, this means that many parents look at Boden as a one-stop shop for the whole family,” he said.

Therefore, it’s clear Markle and Middleton’s influence on the fashion industry extends beyond the items and the styles they choose for themselves and their children.

The royal effect has the ability to transform a company – and the way it is viewed on the world stage.

Kate Middleton wore a $US19 floral mask with a $US2,400 designer dress at her latest royal engagement

You can take a ‘royal fashion’ university course that teaches you how to channel your inner Meghan Markle and Kate Middleton, and it’s completely free