It took me 19 years to become a US citizen. Here's how my journey compares to the average immigrant. 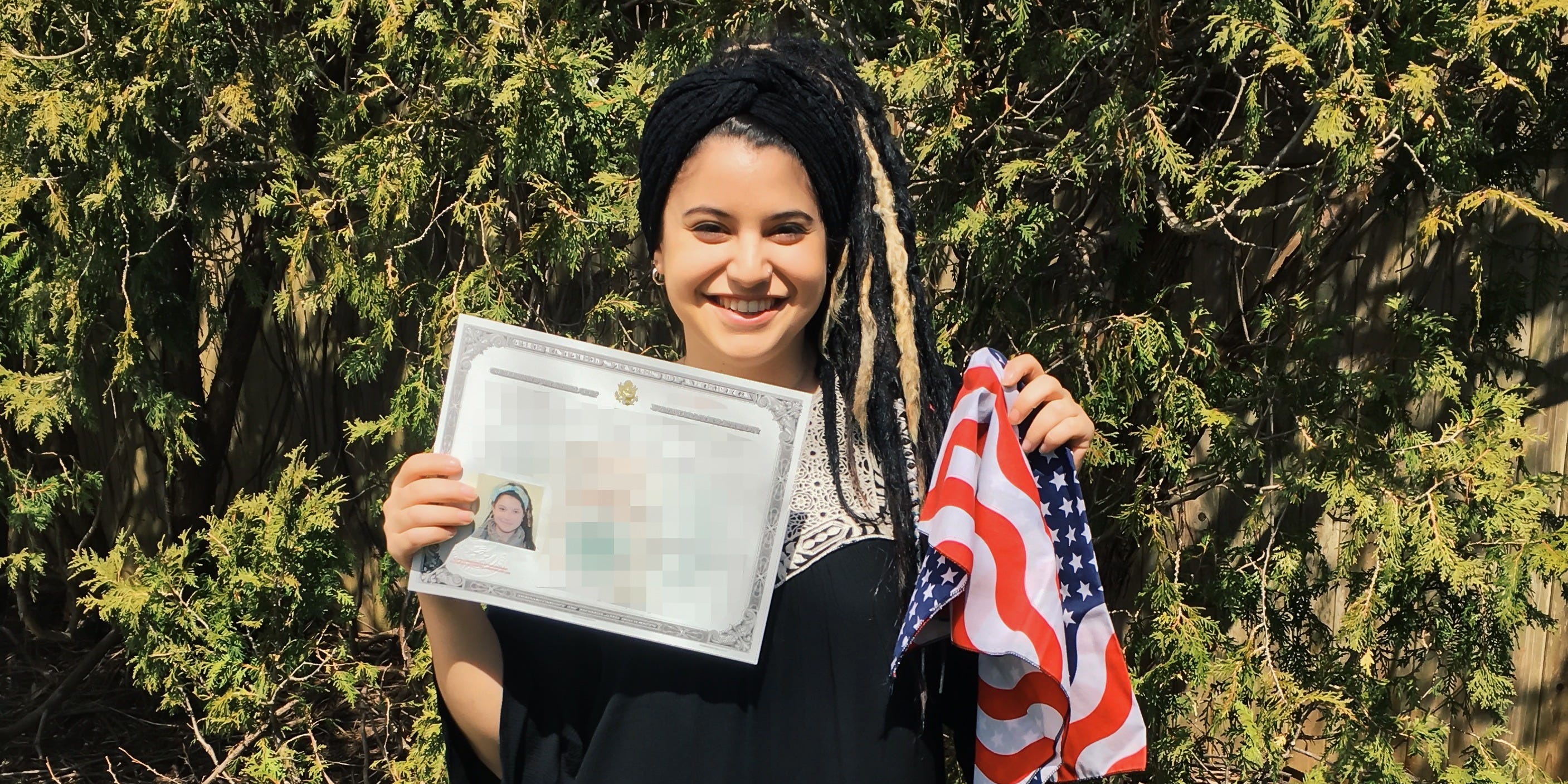 Shayanne Gal/Business InsiderThe author with her Certificate of Naturalization on the day of her citizenship ceremony in 2017.

In August 1998, when I was five years old, my family immigrated to the United States. We came from Israel by way of England and spoke Hebrew as our primary language. In March 2017, almost 19 years later, I became a naturalized citizen at 24.

Like so many naturalized citizens, my family’s journey through the immigration process was a lengthy struggle that cost us thousands of dollars, required access to legal resources, and caused us a ton of stress and uncertainty about the future. It was 19 years of registrations, visa renewals, applications, and interviews.

Once it came time for my official citizenship ceremony, a feeling of immense relief and pride resonated across a courthouse filled with immigrants from all backgrounds and walks of life – whose shared quality was our persistence, sacrifice, and vision for a new life in the US.

There are still a lot of misconceptions about how the immigration system works and what it really takes to get to that moment. Realistically, it’s not logistically attainable for many people around the world.

Step one: Form a plan

In today’s system, there are effectively four ways to become a legal US citizen, but most prospective immigrants without family ties to the US only have the option of attempting citizenship through naturalization. My family took this long, very expensive, and most uncertain pathway to citizenship.

But before attempting to become citizens, we needed to immigrate to the US lawfully. Some of the ways people can do so are through employer sponsorship, through family ties, by winning the diversity visa lottery, or by applying for asylum or refugee status. 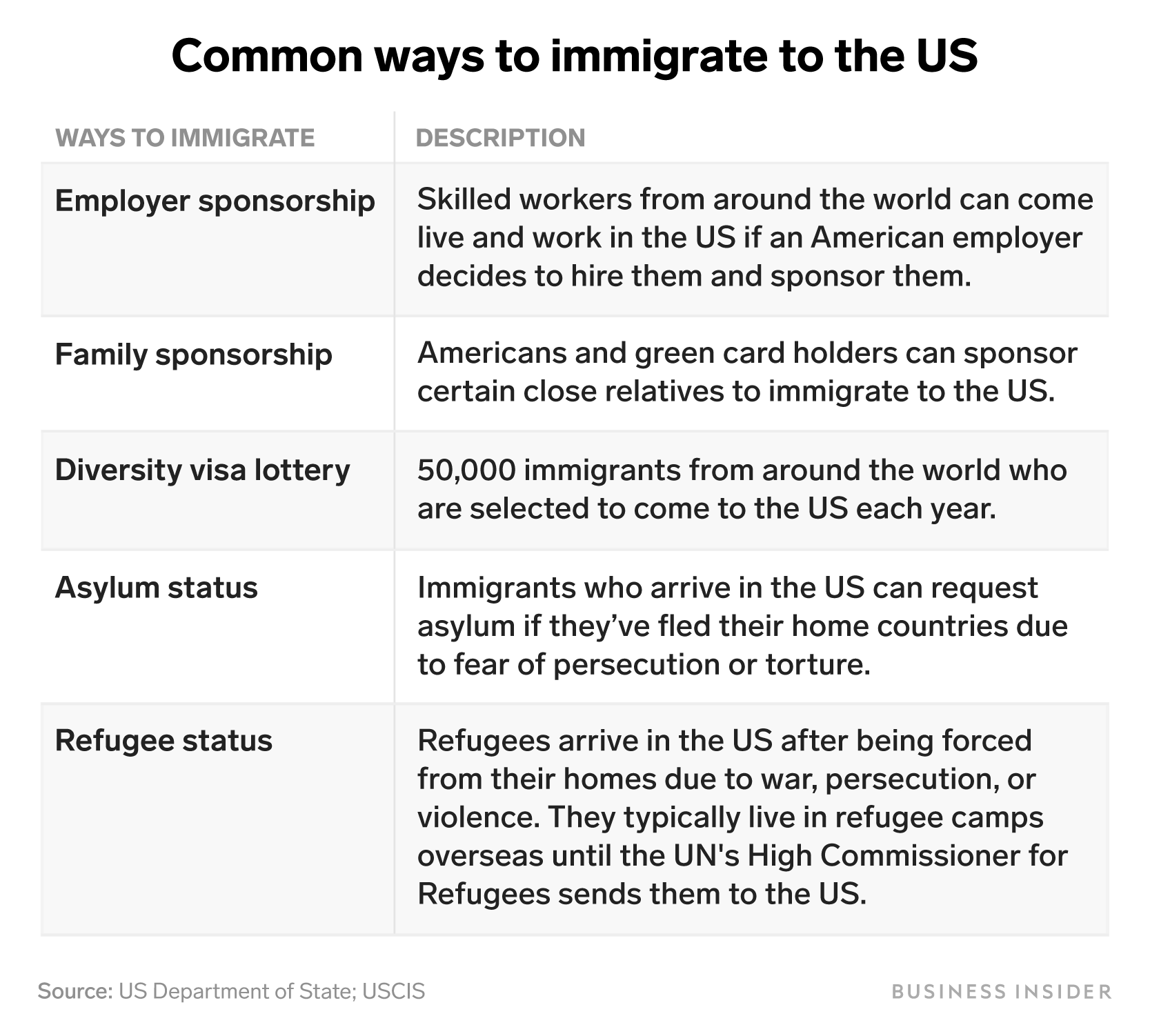 Steps 2-5: Immigrate lawfully, get green cards to work, and gain citizenship through naturalization

My family was able to immigrate because an American employer sponsored my father. We arrived here through an H-1B work visa my father got, which allowed my mother and I to join him through H-4 visas (available to immediate relatives of H-1B visa recipients).

Our first step toward becoming citizens was to become permanent residents with green cards. There are a number of different ways to qualify for a green card, including through family, marriage, employment, or asylum status.

After over a year living under our visas, we applied for green cards and then waited three years before we were unfortunately denied due to a mislabeling issue on our part in our initial application. Committing these types of errors is common, and it is recommended to hire skilled legal counsel to go over applications before submitting, although it’s not required.

The loss of the application fees and the cost of new legal services set us back thousands of dollars. Once we could afford to apply again with the help of an immigration lawyer, the wait time was over six years before we received a response.

The wait time for this part of the process varies majorly from case to case, and as of May 2020, the green card backlog is so massive that people from Mexico who applied in 1996 are only now getting their visas to enter the US.

In the 12 years we spent waiting for a decision on our green cards, we had to renew my father’s temporary work visa five times. Each renewal was an expensive and time-consuming process. Thankfully my father had a stream of income to support this, while my mother and I were both not legally allowed to work.

At this point, I was in high school and had been enrolled in public school for a decade. Living in the US was the only life I had ever really known and I was worried about my future and whether or not I’d be able to remain in the country long-term to complete my studies. My parents worried we’d have to uproot the lives we had built, leave the country, and find new means of income.

Thankfully, USCIS finally approved us for permanent resident status and we were given our green cards in 2010. I was 17 years old. 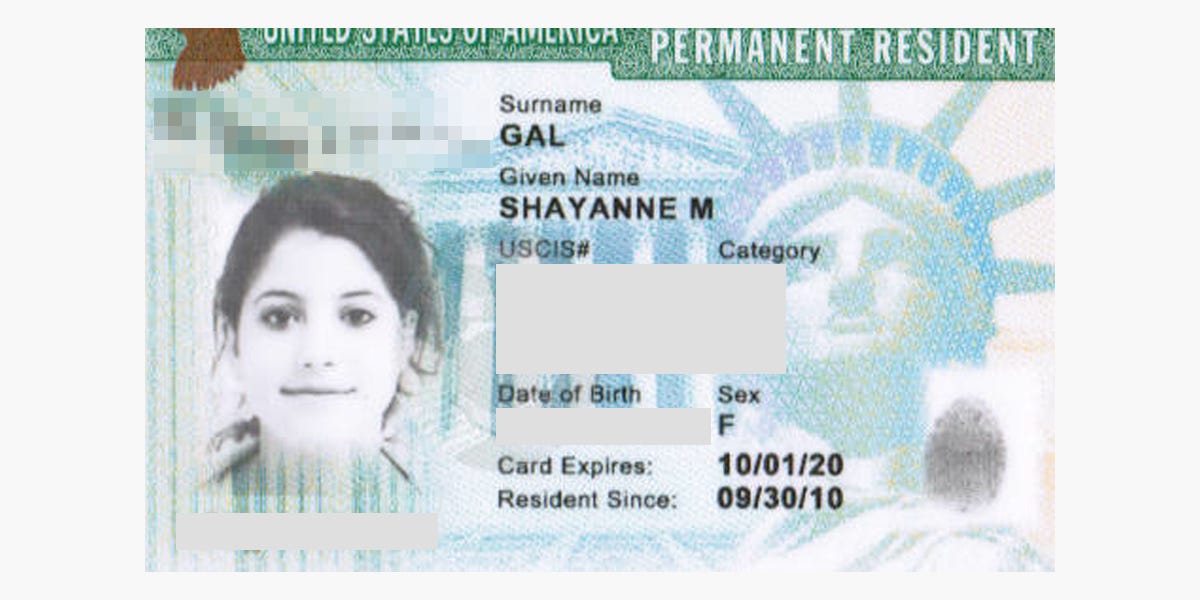 A big part of our journey to legal residency was now complete, but the pathway to official citizenship had only just begun. Being a permanent resident meant that we could do most things citizens do, but we couldn’t vote and we were still subject to potential revoking of our status, as well as deportations down the line. In order to apply for citizenship through naturalization, we had to be permanent residents for at least five years.

We were able to exercise our newly inherited rights of permanent residency during this time, including social security benefits, work permits for my mother and I, and the ability to travel internationally.

But we also had to uphold new responsibilities in order to qualify for citizenship at the completion of five years. These included filing our taxes with the IRS and fully adhering to the law.

Any criminal record, including traffic tickets or minor infractions, had to be cited on the citizenship application, but loosely shouldn’t have an effect on the ultimate outcome. More serious crimes do bar applicants from citizenship and may even lead to deportation if they are considered permanent bars to “good moral character.”

Once I graduated high school in May 2010, I was able to fulfil my dream of attending university in the US and to support myself financially by working in the service industry.

Five years later, after I earned my Bachelor’s degree, it was finally time for my family to fill out our citizenship application.

From the time when we filled out the application to our official citizenship ceremonies, it took about two years. During those two years, we were subject to appearing for multiple biometric sessions, citizenship interviews, and taking the official citizenship test, which includes historical and political questions about the US. We also had to be able to write, read, and speak English – which we’d had plenty of years to practice.

The timeframe between application to citizenship is varied and depends on a ton of factors, a major one being the location where you apply. According to the most recent USCIS data from 2018, 73% of all naturalized citizens resided in 10 states (in descending order): California, Florida, New York, Texas, New Jersey, Illinois, Massachusetts, Virginia, Pennsylvania, and Washington.

Since we lived in New York, the volume of citizenship applications was among the highest nationwide, so the processing time took longer. I was also working abroad on a post-graduate program for an extended period of time in 2015, which prolonged my individual process. My parents gained their citizenship about 8 months before me in the summer of 2016. 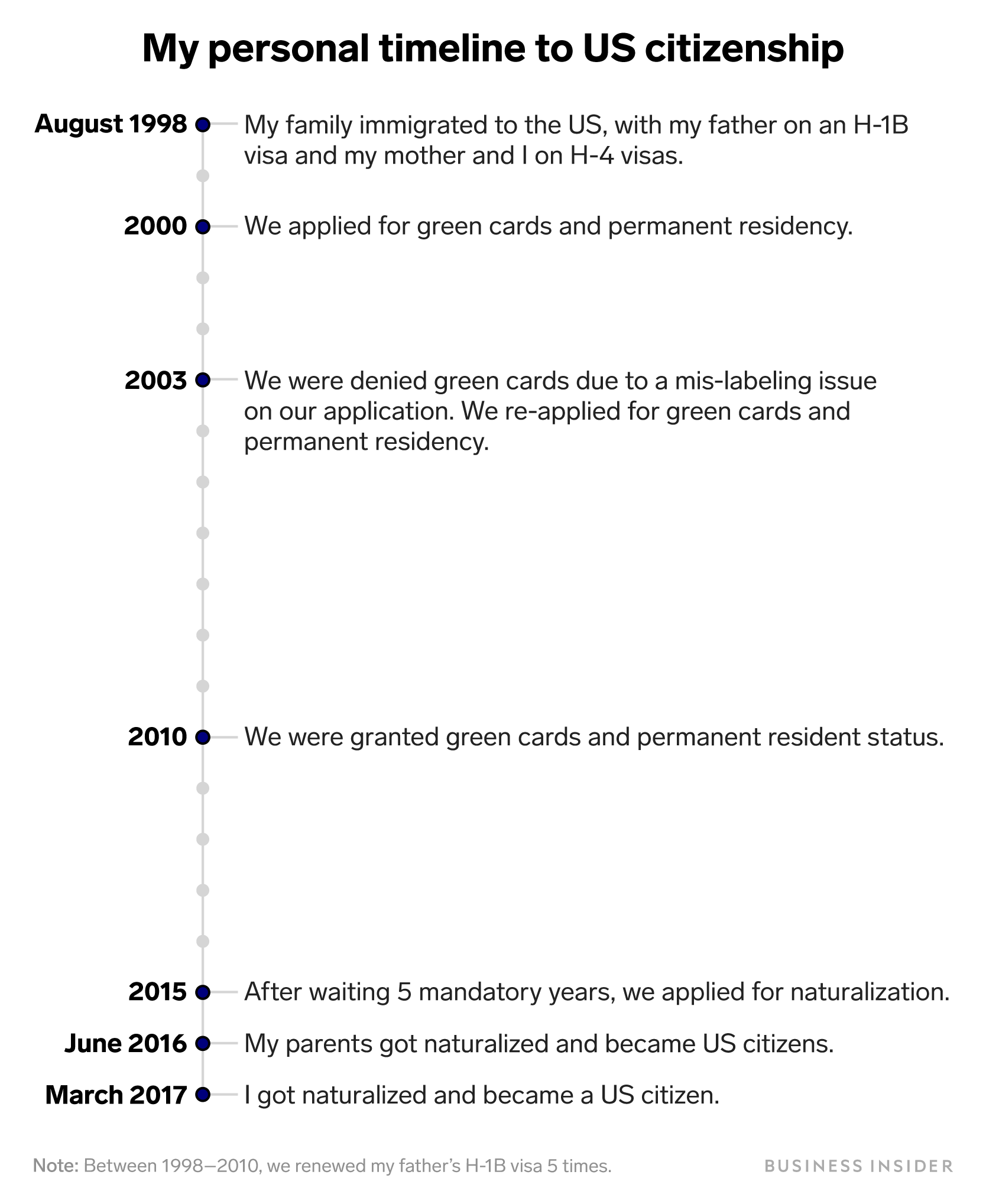 Leading up to my citizenship ceremony, I reflected on the almost 19 years I had spent growing up, learning, working, and living in this country. This entire process had, at that time, taken up over 80% of my life.

As stressful as it was, I felt a mixture of relief and immense gratitude for this time that made me appreciate the privilege of being a US citizen. The US gave me the opportunity to learn and speak English fluently, be the first person in my family to attend university, and enter the corporate workforce. Now I have the opportunity to speak out on behalf of other people like me who left behind other countries, cultures, and family members to pursue a new future in the United States. 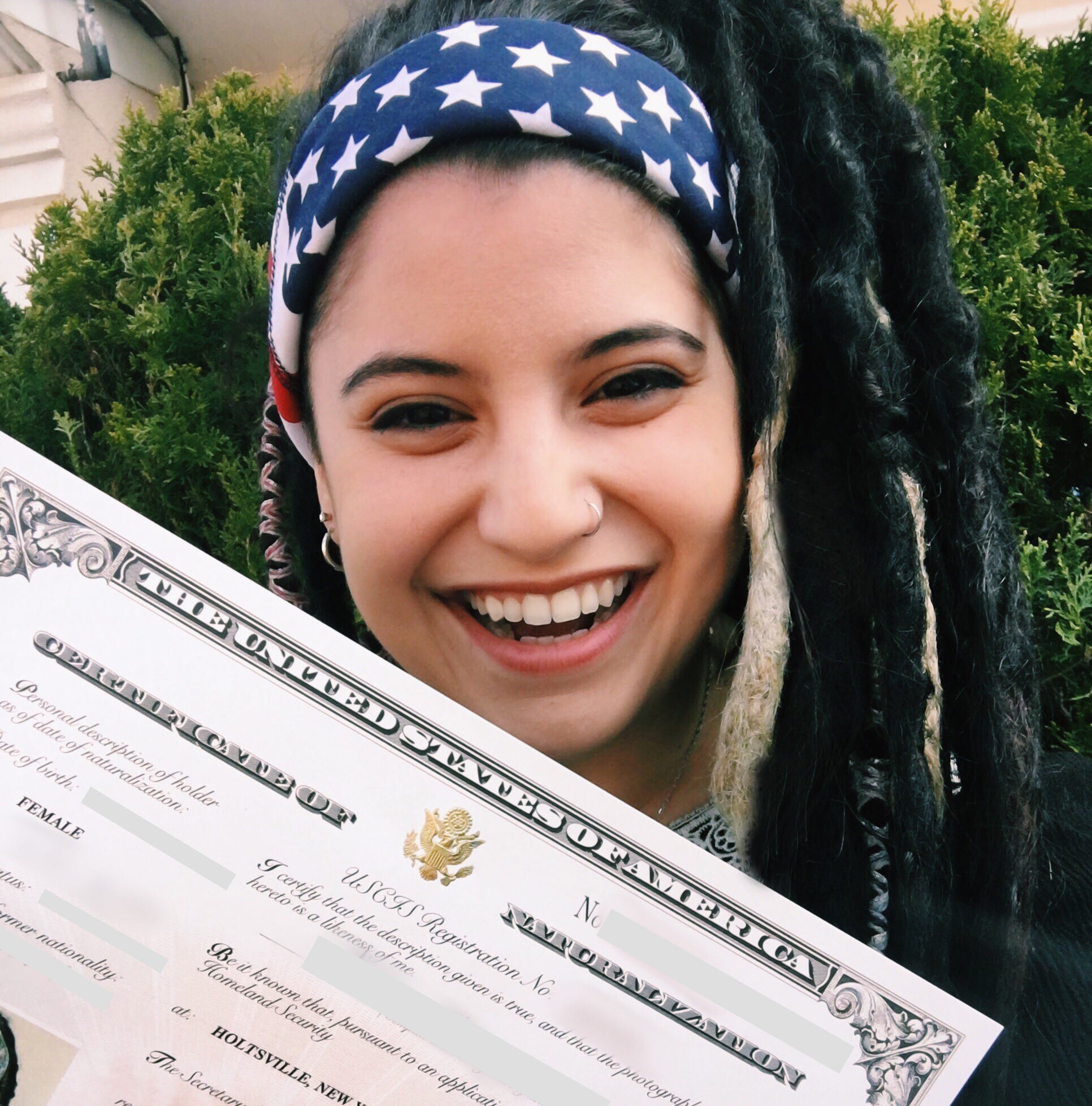 Shayanne Gal/Business InsiderThe author with her Certificate of Naturalization on March 30, 2017.

On that Thursday morning in March 2017, I sat in a courthouse with 117 other individuals who had taken a similar path to my own. They came from all over the world and were of different races, ethnicities, religious beliefs, and so on. I think at least 90 different countries were represented in that room. Despite our differences, the one thing we all related to was our sacrifice, our journey, and our love for the United States.

It was an emotional ceremony that concluded in all of us standing together and reciting the Pledge of Allegiance in unison. The beautiful experience solidified for me that America is a land of immigrants and a melting pot of hope. It was also a reminder that although the political atmosphere surrounding our immigration system is fraught, immigrants from all over the world still continue to thrive, diversify, and contribute wholly to this country.

In FY 2018, the top countries of origin for naturalization were Mexico, India, China, Philippines, and Cuba. 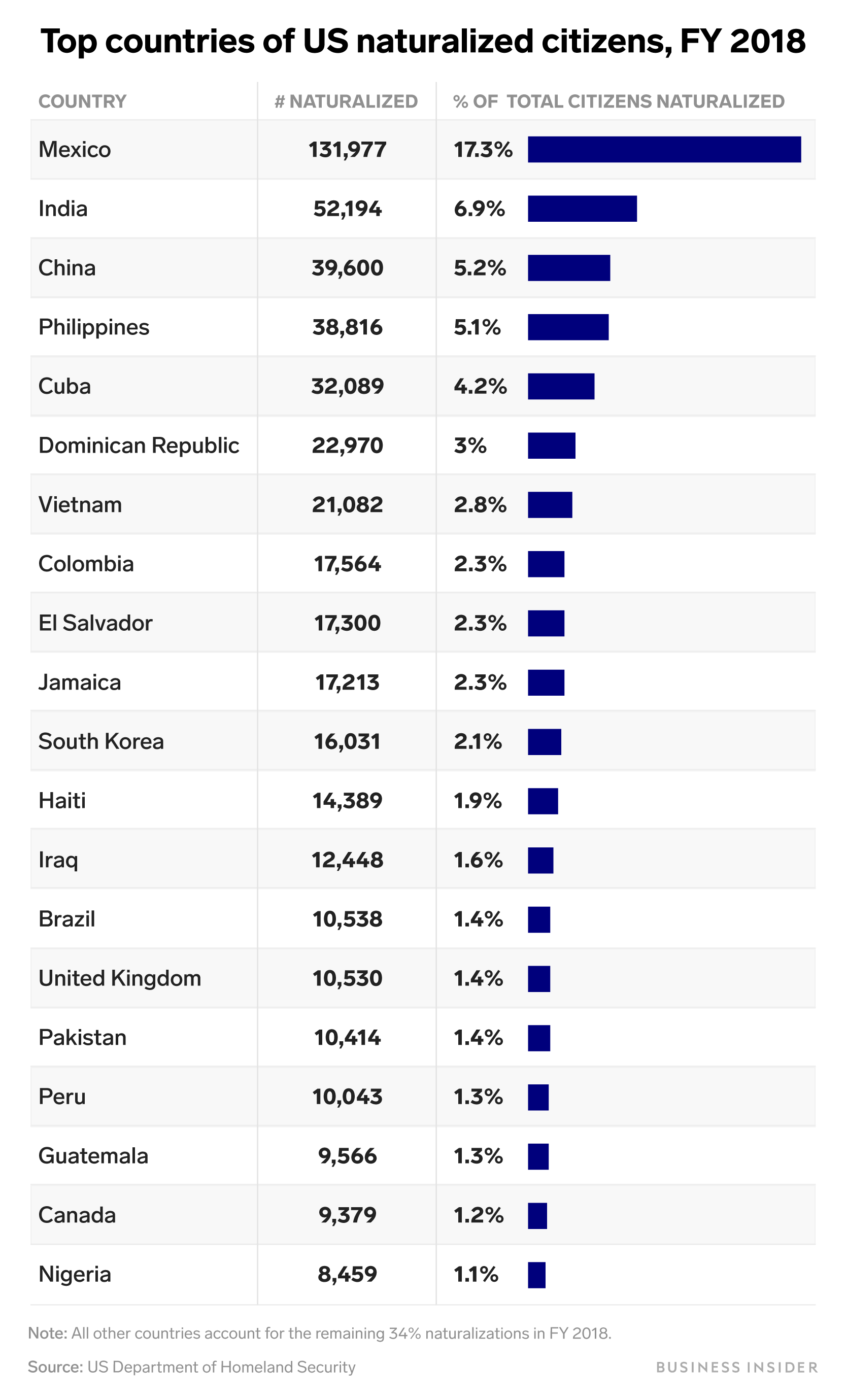 Citizenship isn’t the reality for everyone. Most people don’t get an entry visa to immigrate to the US at all – and if they do, they still may not have the means to renew it, pay for applications and legal assistance, or ultimately get a chance to gain permanent residency, let alone apply for citizenship.

The federal government’s increasingly strict immigration policies are deterring and preventing many prospective immigrants from entering the country or becoming citizens. Over the last few years, the government has slowed down visa requests for working immigrants like my father, implemented travel bans on certain countries, reduced overall refugee intake, and discouraged asylum seekers from entering. The Trump administration has tried to justify these policies by citing threats on national security and insisting that immigrants pose a hazard to the American job market. 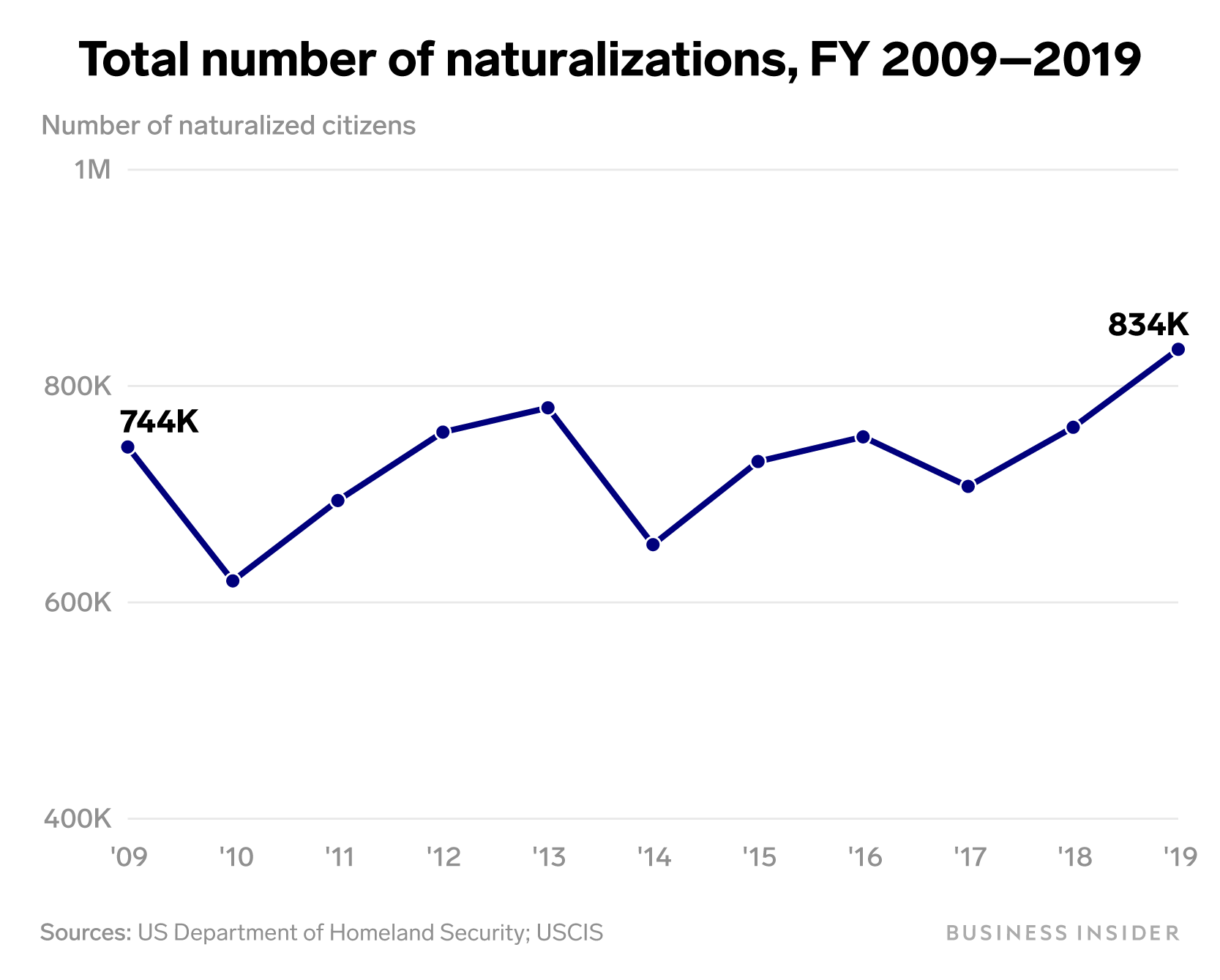 The number of naturalizations has remained steady over the last few years, as all of the citizens naturalized up until FY 2019 had to have been in the process of applying for citizenship and residing in the US for a minimum of 3-5 years.

But the new policies under the current administration have created barriers to immigration and have instilled fear and anti-immigrant sentiments across the nation, which may impact the number of immigrants entering the US, and the number of those attempting the pathway to gaining citizenship, in years to come.

My journey to citizenship followed a specific path, but it is in no way unique. The hundreds of thousands of immigrants who pursue citizenship through naturalization each year all have to jump through similar hoops and persist through each step of the process in order to eventually gain citizenship.

My story is a testament to the fact that even if you are presented with an opportunity to immigrate to the US lawfully and you do everything by the book, it is no short and easy feat.

Opportunity is only the first step. The government’s increasingly strict requirements, having enough money to get through the application process, perseverance, and sheer luck decide the rest.