Between February and June 2020, all 50 US states and several US territories will hold a Democratic primary election or caucus continuing with Super Tuesday on March 3.

While US territories don’t have voting power in federal elections, they still send delegates to the Democratic and Republican National Conventions.

Then, the Democratic nominee will be formally selected at the Democratic National Convention, which will take place in Milwaukee, Wisconsin in mid-July, by the delegates allocated in those primaries.

But even though the nominee will be formally picked then, we’ll probably know who wins much earlier than that.

Here’s how the entire process works from start to finish: To get on the ballot in the first place, presidential candidates need a lot of signatures. These can be expensive to get depending on the state, so for longshot candidates, it’s often the first hurdle to getting elected.

This also has the impact of forcing campaigns to have a baseline of financial and organizational capacity to carry them past the first obstacle and is one reason why lots of candidates tend to drop out right before big deadlines. This even can trip up otherwise competitive candidates, as evident by the fact Andrew Yang did not qualify for the Ohio ballot.

Every state has a certain number of delegates to allocate, which is determined by a number of factors including how big the state is, how Democratic they lean, when they vote, and if they vote with their neighbours.

The DNC has four states who vote early in every election cycle: Iowa on February 3, New Hampshire on February 11, Nevada on February 22, and South Carolina on February 29. While these primaries hold disproportionate importance in the process by going first, they only accounted for 4% of the total pledged delegates.

The earliest that other states can vote this cycle is on March 3. Lots of states decided to hold their primary on that day, which is why we call it Super Tuesday.

This cycle fifteen states, the Democrats who live abroad, and the territory of American Samoa held Democratic primaries or caucuses on Super Tuesday, allocating 35% of the total delegates on that date alone. It’s a massive day, and will be the beginning of the end for several campaigns and the end of the beginning for a select few.

In general, states want to balance their role in narrowing the size of the field with having the final say on who wins by having the most possible delegates at the convention.

Some states – the ones on Super Tuesday – are willing to leave all the extra delegates on the table in order to get the first bite at the apple. Other states will wait until the last possible vote – smaller states like New Jersey and New Mexico – to gain outsized representation at the convention and potentially a shot at playing kingmaker.

On April 28, for example, six states in the so-called Acela corridor in Rhode Island, Connecticut, New York, Pennsylvania, Delaware, and Maryland all receive delegate bonuses for holding their primaries all on the same day later in the season. They also get a bonus because they share borders. The 663 delegates allocated that day is considerably higher than the 543 they would otherwise have if not for bonus delegates.

Sixty per cent of delegates will be decided after the March 17 primaries, and after the April 28 “Acela primaries,” 90% of the total delegates to the convention will have been allocated, meaning we’ll have a pretty good idea of who is favoured to win the nomination by that point.

Every state also has its own unique procedures for conducting primary contests. Some states have an open primary where non-affiliated voters and/or registered Republicans can vote, while other states allow only registered Democrats to cast ballots in Democratic primaries. And while some states elect their winner in a caucus, some do it in a primary election. 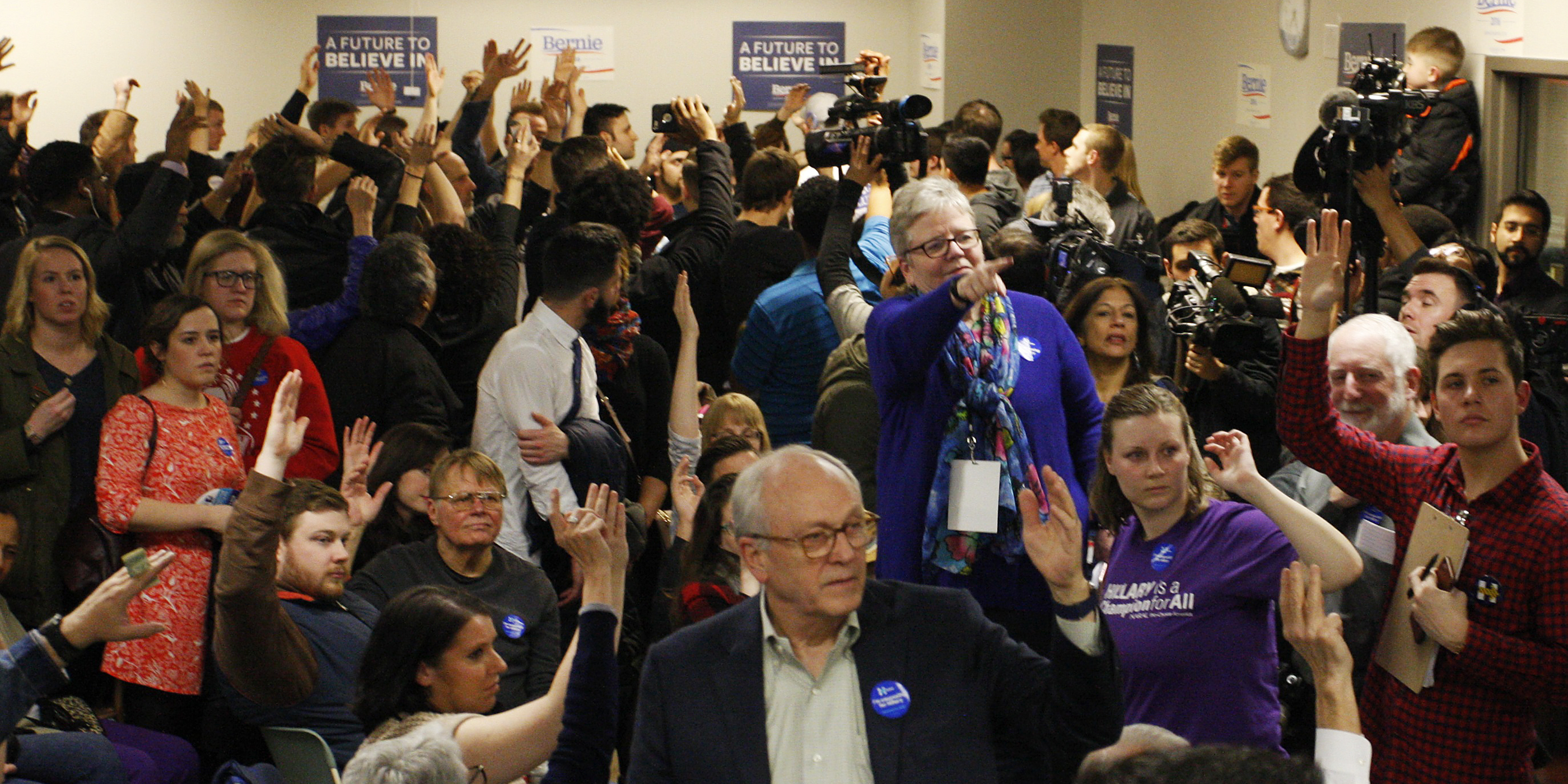 What is the difference between a primary and a caucus?

In traditional primaries, voters go into a voting booth and cast a ballot expressing their choice for the Democratic nominee. Delegates are then allocated proportionally based on the results of that vote.

Caucuses, however, are much more communal and collaborative. Every caucus-goer is assigned to a caucus location, like a high school gym, for example, in their voting precinct where they gather in groups, deliberate, and use preference cards to publicly express their choice for the Democratic nominee instead of casting a ballot.

Importantly, both Iowa and Nevada held two alignments for caucusgoers to express their preferences. If someone’s first choice is not viable past the 15% threshold, they can realign their preference to a candidate who is viable or try to make their first choice viable on the second alignment, which is not an option in regular primaries.

Caucusgoers whose first-choice candidate is viable on the first alignment, however, were locked into their decision and cannot change their preference. This means candidates only gained and not lost votes as the night goes on.

In an effort to make caucuses more accessible and inclusive for those who can’t feasibly be in the same place caucusing for hours on end, the DNC encouraged both Iowa and Nevada to adopt reforms to make it easier to participate.

The magic number in most primaries is 15 per cent

Most states allocate their delegates by congressional districts, but some, like Texas and New Jersey, use state legislative districts instead.

While delegates are allocated proportionally, in nearly every state the minimum threshold to earn delegates is 15% of the vote.

That means that as long as someone breaks 15 per cent either statewide or in at least one district, they get delegates from that state to bring to the convention.

With such a crowded 2020 field, a number of candidates will inevitably fail to meet the delegate targets or drop out. Already, former Mayor Pete Buttigieg, Sen. Amy Klobuchar, Sen. Elizabeth Warren, and former Mayor Mike Bloomberg all recently dropped out of the race after earning a collective 135 pledged delegates.

If someone wants to stop running for president at any point during the process, the delegate slots that they have earned – who are filled by real people – can either be told to support a rival candidate or be released to vote for whomever.

In many states, statewide delegate slots earned by candidates who dropped out are automatically re-allocated to the remaining candidates in the race.

Now that Buttigieg, Bloomberg, and Klobuchar have both endorsed Biden, they will likely ask the pledged delegates they have earned to also support Biden at the convention. What happens at the convention?

At the Democratic convention, a candidate will actually be nominated when a simple majority of 1,991 out of 3,979 total pledged delegates support a given candidate.

But what if no candidate gets an outright majority of delegates? This is called a “brokered convention,” and is highly unlikely to happen this year now that there are only two major candidates, former VP Joe Biden and Sen Bernie Sanders, left in the race.

In this kind of hypothetical split convention scenario, automatic delegates, previously known as “superdelegates,” would enter the fray to break the deadlock and select a candidate if there is no clear majority after the first ballot.

Anyone who is a Member of Congress, former President or House Speaker, Governor, or DNC member gets a ticket to the convention and would become a delegate with voting abilities to help split the tie at the second ballot.

Superdelegates played a significant role and were highly controversial in the 2016 convention, but the DNC has adopted rule changes since then that have made them pretty much irrelevant in all but the most extreme circumstances.

All of the important primary, convention, and debate dates you need to know for the 2020 presidential election