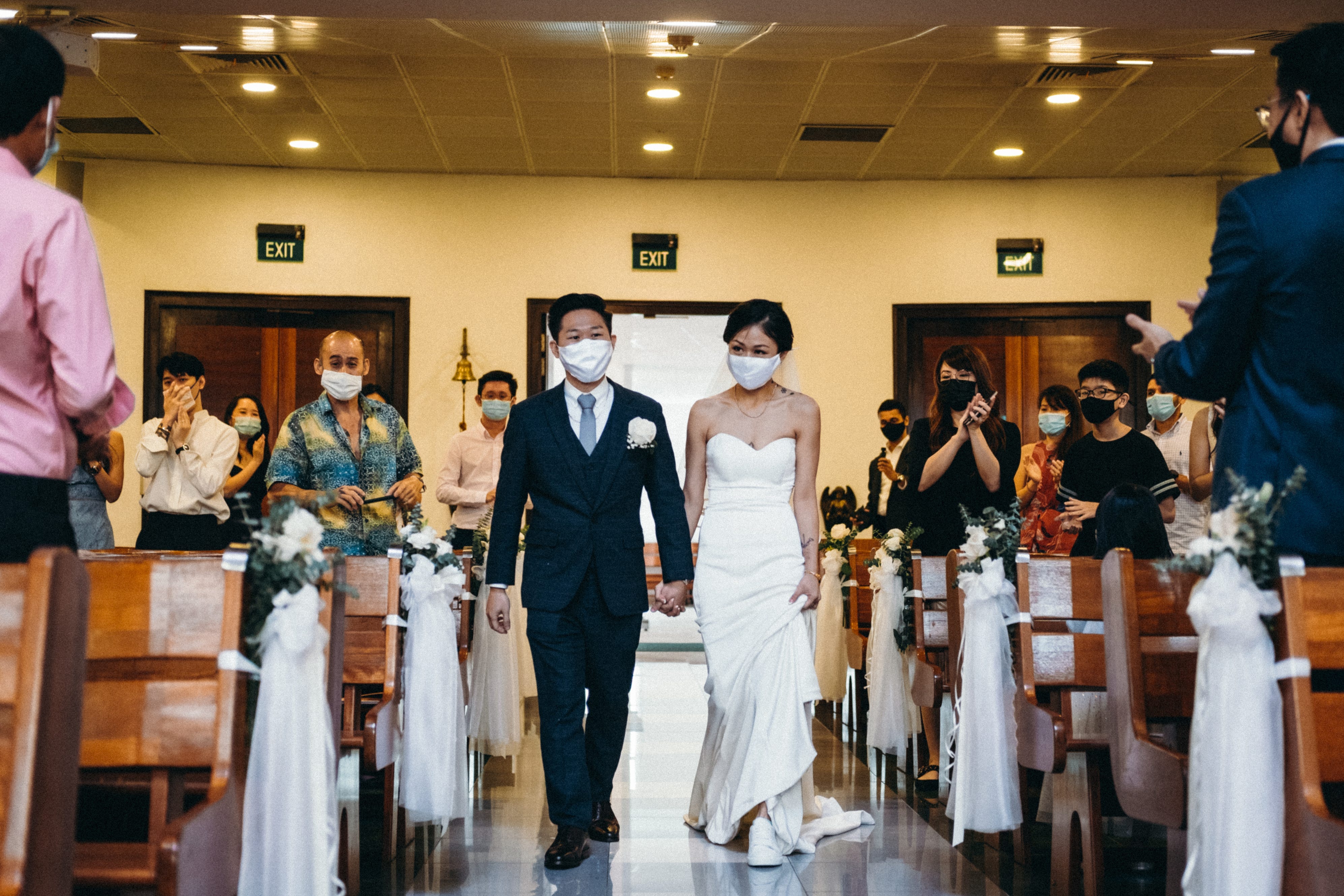 Shoshi Kudo and Gina Loh had visions of a big white wedding with 180 guests, including Kudo’s family flying in from Japan, after he proposed to her in January 2020 during a mountain hiking holiday.

But three months later, Singapore went into lockdown amid the coronavirus pandemic and all weddings were prohibited.

When the coupled married on January 9 this year, only 100 guests could attend, provided they all took painstaking steps to maintain social distancing â€” including being divided into two “zones” of 50 people. Their pandemic wedding had to be radically different to what they had envisaged a year earlier.

Some friends decided to postpone theirs until the pandemic was over but Kudo and Loh, who met on a blind date in 2015, didn’t want to put their lives on hold.

Kudo and Loh booked a church in June 2020, when Singapore lifted restricted first imposed in April. But plans for their reception hung in the balance.

On October 3, the government announced that weddings could have up to 100 guests. The couple decided to book the Grand Ballroom at the Singapore Island Country Club for a last-minute reception.

While the couple could have some familiar elements to the day, much of their original plan had to be scrapped or curbed.

I’m a doctor in Singapore. Our COVID-19 cases have been low since last fall â€” here’s what we’re doing right.

The 100 guests could not mingle and a ban on wind instruments and singing meant they could not have the choir they wanted.

The couple originally wanted a cocktail party, a DJ to play music all night long and a photo booth where they could capture candid shots of friends. But all of this was abandoned, along with a trip to Bangkok for a bespoke suit for the groom.

When the event started, the mask-wearing guests had to remain one metre apart. Each guest had to register using Singapore’s contact tracing app, Trace Together, and stop for a temperature check before going directly to their socially-distanced, pre-selected pew.

“We had to separate our guests into two zones of 50, and these people weren’t allowed to mix, so we split them into family and friends,” Kudo told Insider.

“Depending on the length of the pew, three or four people could sit together, but they had to be from the same household.”

As they couldn’t have a choir, Loh walked down the aisle to ‘It’s Your Day’ by the Korean pianist Yiruma, which a friend played via Spotify.

The couple stood one metre away from the priest and said their vows. Before each guest could receive communion, ushers sprayed their hands with sanitizer. The priest gave the guests crackers but no wine. 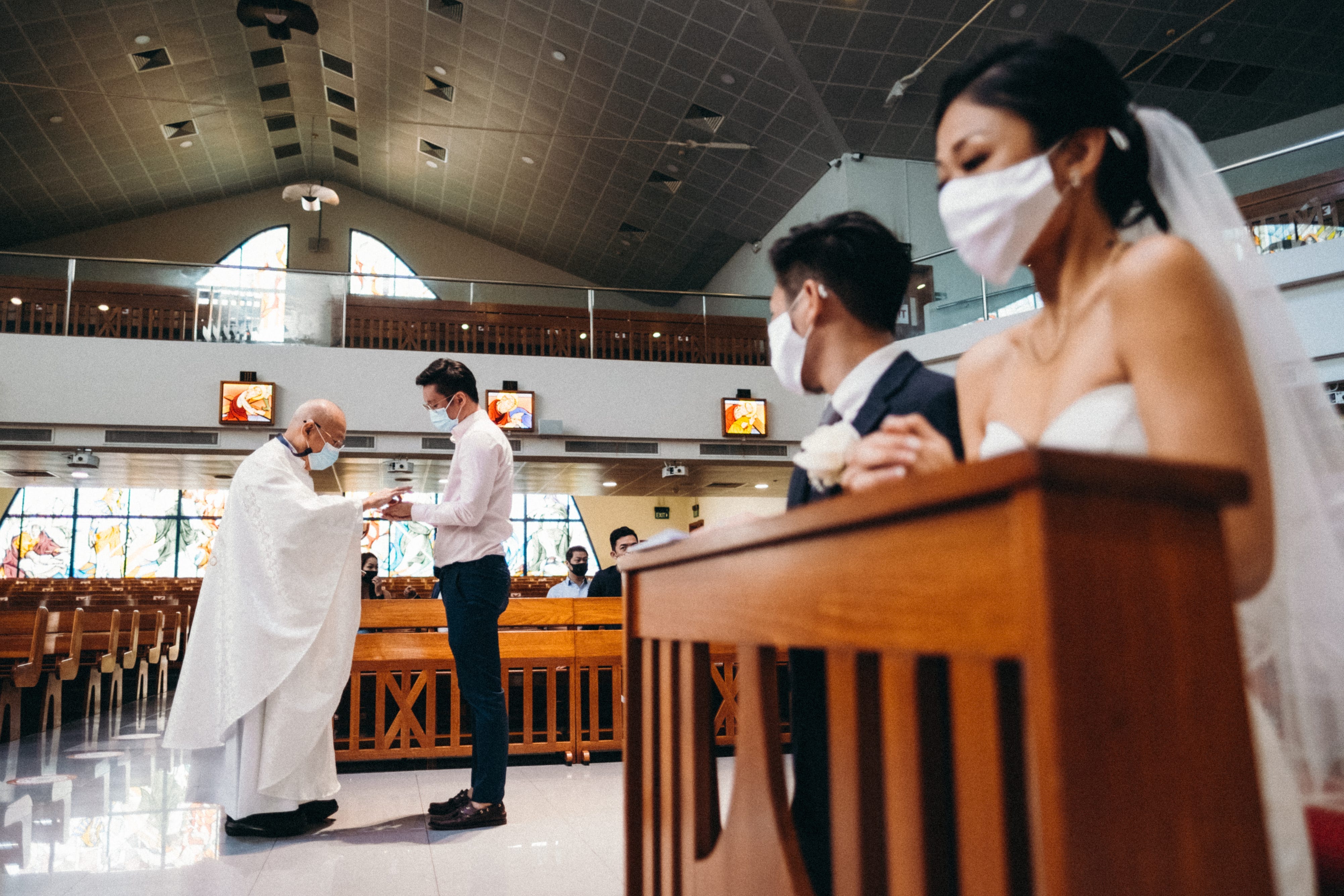 “At church it was quite muted. We weren’t allowed to have any singing,” said Kudo. “We also had to leave within 60 minutes, which was maybe to help prevent any socialising.”

The only other difference to the ceremony was spotted by the groom. “The priest didn’t say ‘and now you may kiss the bride’,” Kudo said. “I was waiting for that moment.”

When the couple booked the church, they’d planned to serve a finger buffet so that guests could relax while they took photographs.

But the refreshments where they could mingle had to be cancelled, as well as the keepsake group photographs.

While wearing masks was not part of the couple’s original plan, Loh said they had one advantage during a long day. “Your jaw gets locked up through smiling so much so we could take a rest,” she said, laughing.

The guests took separate transport to the reception. As soon as they stepped out of their car, they had to check in at the club’s reception via Trace Together, take a temperature check and find their seat at a pre-selected table.

With a pre-COVID wedding, it would have been traditional for the best man and siblings to give speeches on the stage but, as everyone had to keep their distance, the bride and groom gave the only two speeches of the day.

This meant the couple had to be more hands-on. As Loh is a video editor, she organised a slide show of their story so far.

As the only group photographs during the reception were taken at the tables, the couple had to plan even more carefully who would be sat together.

“As guests couldn’t change tables or zones, we wanted to make sure that, for example, our parents were sat together,” Kudo added.

Both Loh and Kudo have Chinese heritage. A Chinese wedding reception is usually a lively affair, with sharing dishes placed in the centre of the table and a rousing toast given by each one to the bride and groom.

The sharing dishes were switched for individual plated servings and the toasts were silent.

“Each table would usually give the bride and groom a toast wishing them health, happiness and children,” said Kudo. “It usually turns into a light-hearted competition with each table trying to give the loudest cheer, but unfortunately they couldn’t do that.”

“While the day wasn’t what we originally planned, it was still really special,” Kudo added.

The couple are now looking forward to starting to plan their honeymoon in Italy, once the pandemic is over.