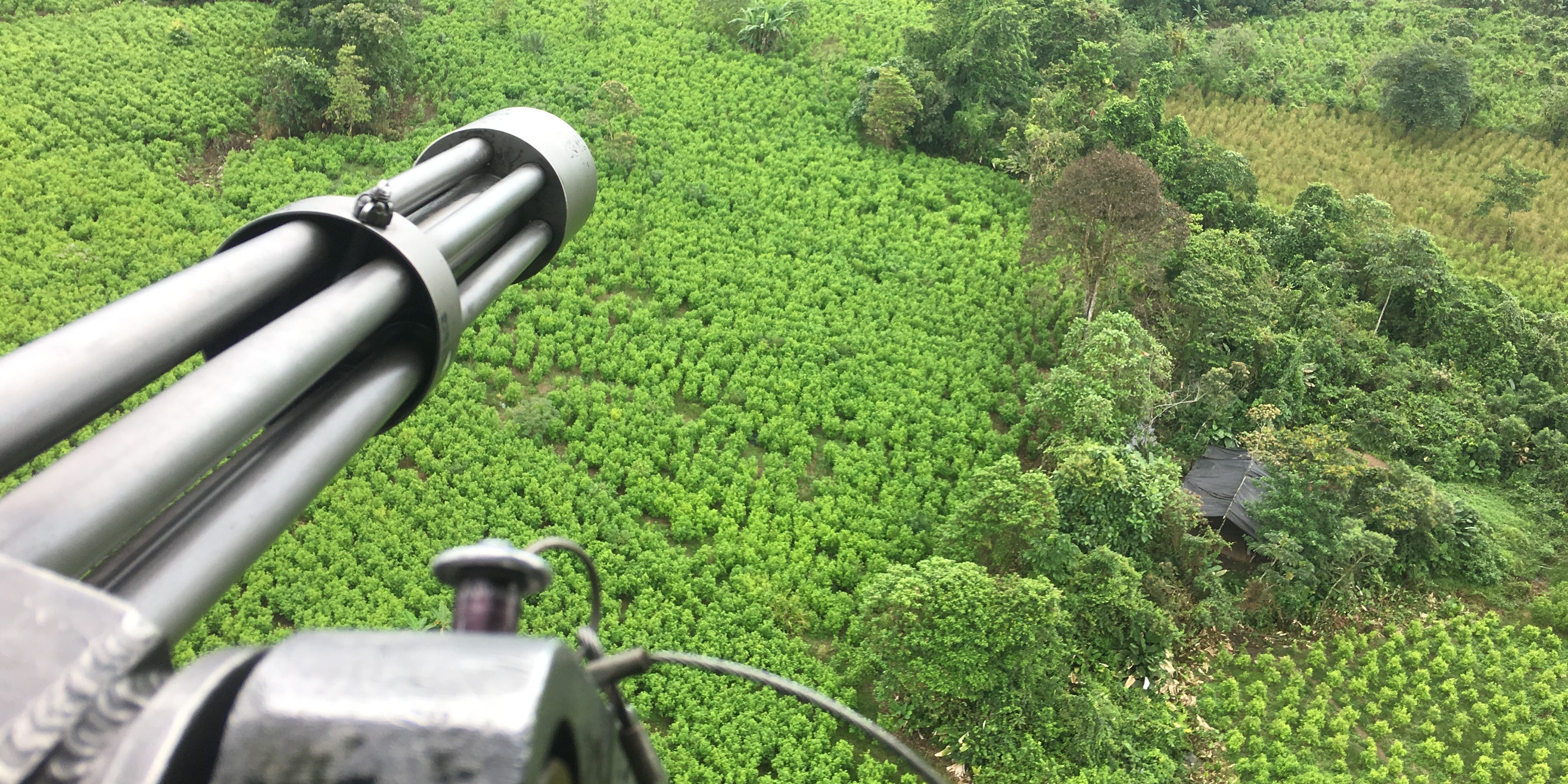 Toby MuseAn antinarcotics Black Hawk helicopter flies over a field of coca in Tumaco in southwest Colombia. Hidden in the cluster of trees is a small coca laboratory used to turn the leaves into coca paste.

THIS COCA LABORATORY OPERATES ONLY because it has the permission from the FARC dissidents who rule from the jungles. And right now, the coca is about to change. To evolve.

“Laboratory” is a grand term for wooden poles buried in to the earth holding up a roof made up of large sheets of black plastic. Even with no walls, it’s gloomy inside as the five men prepare for the day’s work. Huge barrels stink of gasoline and ammonia. This is their office. They start at 6 a.m. and work until 4 p.m. Like office workers, they eat lunch here, listen to the radio, chat, and joke around. Here they will turn the coca leaves into coca paste, a brick of dried powder that is just one stop short of pure cocaine.

Small amounts of coca are legal for the indigenous who consider it a sacred plant. Wandering the countryside, a policeman is not expected to rip out every coca bush he sees. If a policeman sees a coca laboratory, he’s expected to take it down and make arrests. In the fields, it’s coca. Here in the laboratory, it’s the beginning of the cocaine conspiracy. And people act like it. 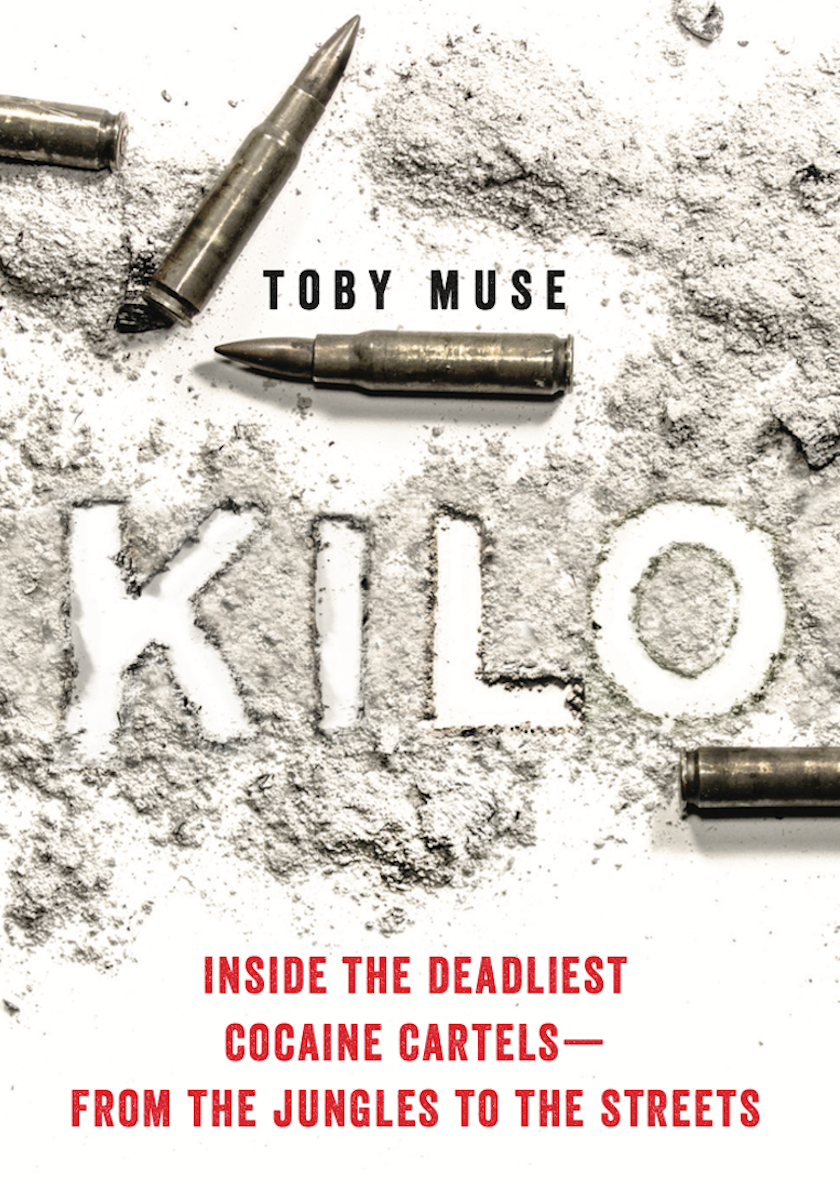 Still, a couple of months ago, soldiers walked into this coca lab and sheepishly asked for some gasoline for their motorbikes. The lab workers gladly filled a canister with gasoline while everyone pretended not to notice the mattress of coca leaves.

At first, the lab workers are not interested in talking. “What’s the recording for? You better not be with the police. What part of the United States are you from?”

“Ahhhhh, a gringo from England. You saw the match? What did you think?” says Pedro.

This f—ing question. I’m half-American, half-English. For all my time in Colombia, I’ve always said I’m English. Americans aren’t too popular in the cocaine countryside, given the billions the United States has spent funding fights against the cartels, guerrillas, and cocaine. So, I’m British. With these words, people relax. And I can work.

And then came that f—ing football match. Colombia and England faced off in the World Cup in 2018. After an ugly game, England won. Colombians felt they were robbed (they weren’t). Now every Colombian wants to hear the English man say Colombia should have won.

Pedro is pacified and allows me to stay in the laboratory. Right now, there’s work to do. Pedro and Carlos empty the sacks of coca leaves on to the floor. A one-ton mattress of green coca leaves. It’s irresistible â€” some coca-pickers, known as raspachines, dive on top of it, like kids into a mound of snow. 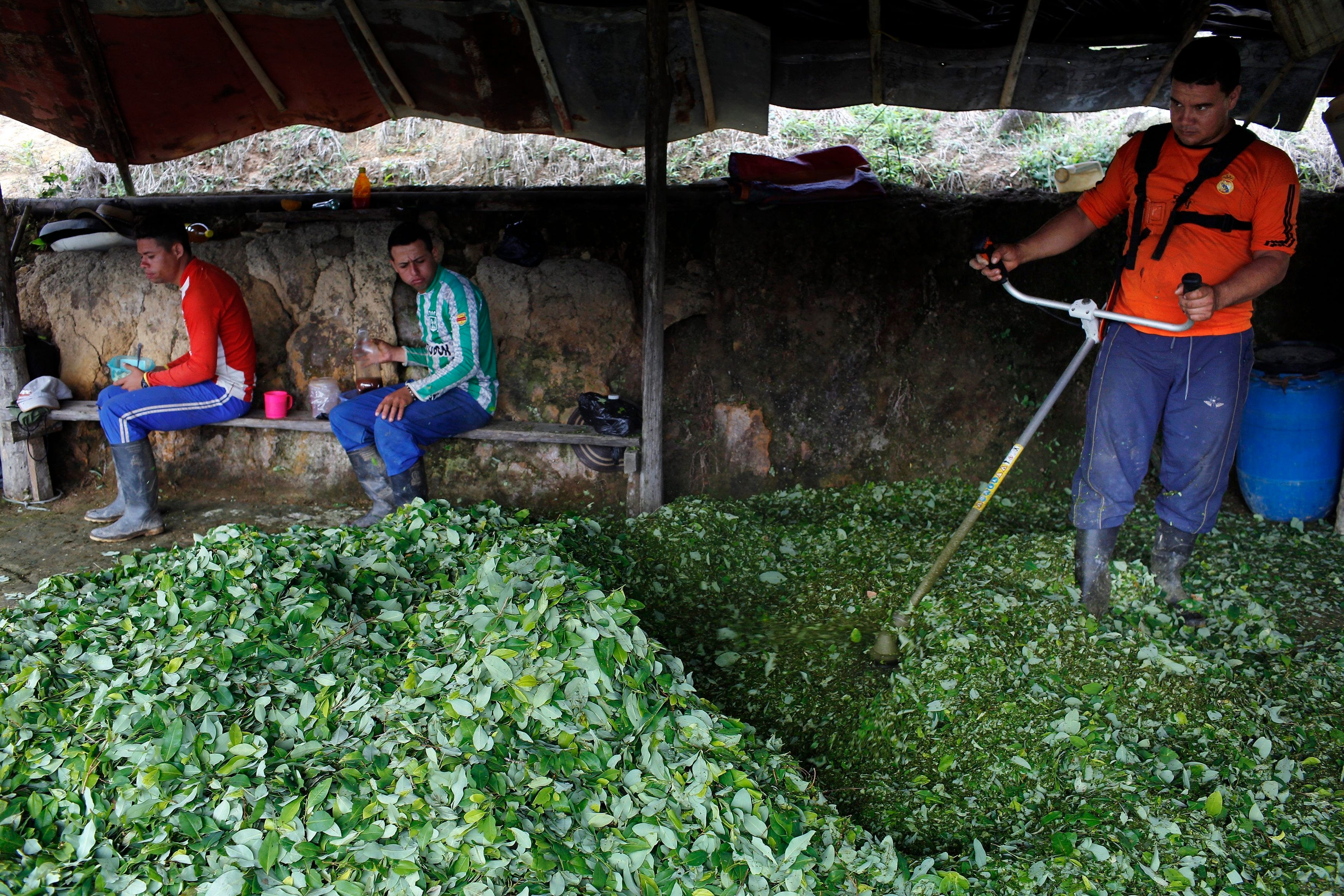 “Stop it!” Pedro yells and the raspachines stop messing around and file out. He cranks up the wood chipper and it whirs away. Pedro thrusts armfuls of coca leaves in and out sprays shredded coca. It takes about two hours to pass a ton of coca through the wood chipper.

The farmer’s wife arrives with lunch. Today it’s chicken, rice, yuca, and a bottle of apple soda. Colombians are gourmands and lunch is the countryside’s most important hour. Now is the time to talk.

“This helps keep people alive. But no one is getting rich off this,” Pedro says pointing to the lab. Carlos runs through the farmer’s costs to process a ton of coca leaves: $US250 for the coca pickers, $US80 to the laboratory workers, $US150 for the gasoline, other materials another $US50.

“He’s left with $US200 . . . That’s not much,” Carlos concludes. That’s $US200 every ninety days and it comes expensive â€” the farmer now lives outside the law. Someone steals from him, threatens him, slaps him like a dog? Well, live with it, because with a field full of coca, he’s not phoning the police anymore.

Farmers used to grow seven, eight hectares of coca and could make decent money. But the fields became too easy for the police to spot and swoop in and destroy them. Now almost all farmers grow a hectare or so. 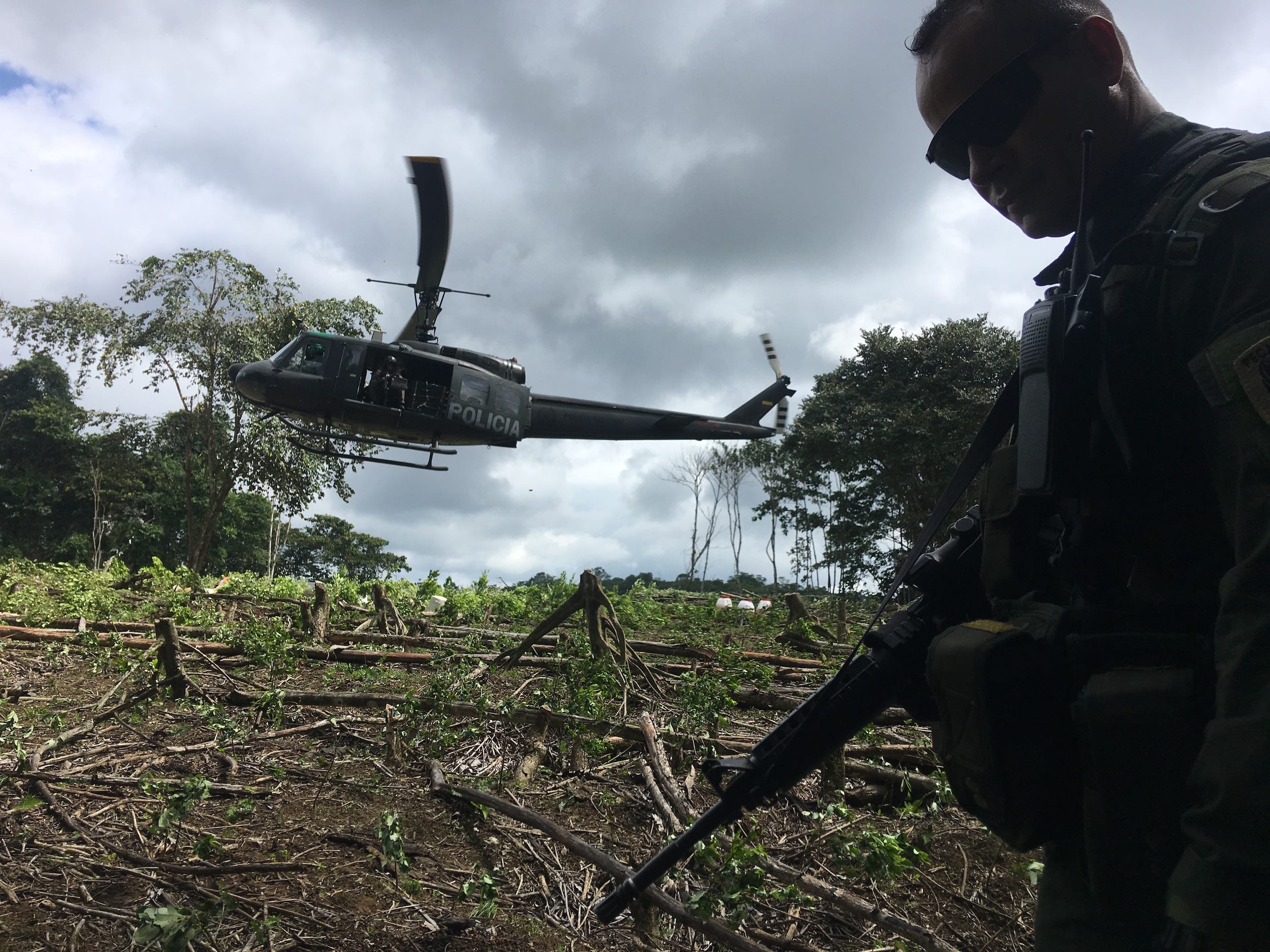 Toby MuseCapt. Max Perez of the antinarcotics police turns away as a helicopter takes off from a field of coca in Tumaco in southwest Colombia.

“Across Colombia, a lot of people look to the coca because it produces a lot of jobs. Not riches, but a lot of jobs,” says Pedro. For the men here in the laboratory, coca exists because of the poverty of the countryside. It’s that simple: give the farmers an alternative and they will ditch coca now. Pedro used to grow coca until the government arrived, promising to help transition him to legal crops.

“The government told us they would help us if we grew cacao. The kilo was three dollars. And that’s an ok price. It promised to help us export the cacao. But the government made some deals and flooded the country with cheap imports … It’s now a dollar a kilo. You can’t cover costs at that price. So, what did the people do?” He sweeps his arm around the laboratory.

Pedro interrupts himself: “Do you believe in God?”

I communicate with a nod, a shrug, and a firmer nod. “Good. Can’t speak to anyone who doesn’t believe in God. So, as I was saying…”

Where else in the world can you be thrown out of a coca laboratory for being an atheist? Nowhere, that’s where. Only Co-Lom-Bi-A.

Pedro picks up his story again â€” he was out of the laboratories for sixteen years. When the price of cacao dived, he asked his cousin for work. So, it’s back to the labs.

“I’ve got four hectares of cacao, but here I am working in the laboratory. It’s not paying. I had to come here, leaving my wife and kids back home.” 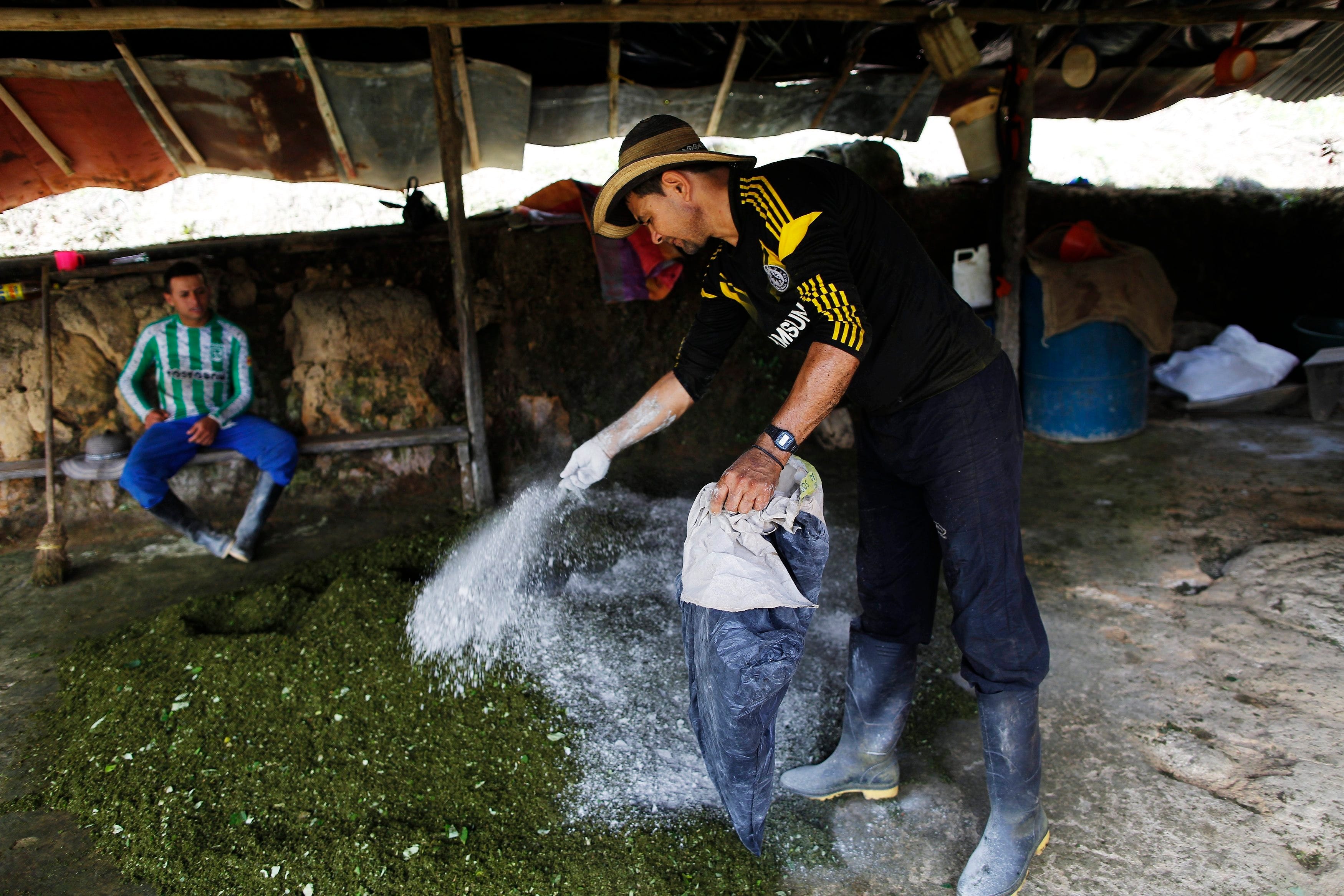 He earns $US16 a day and he’ll be gone from his home for three months.

“Here in the countryside, ninety per cent of people just survive. What does that mean? You work to eat, not to have. Not to make money. Be it coca, cacao.”

Lunch is finished and now is the obligatory post-consumption chat to ease the digestion. And all want to keep talking because the endless dysfunction of Colombia is a source of fascination for every Colombian. Colombia, the enigma that befuddles its own citizens. Rebels, prostitutes, soldiers, taxi drivers, priests all try to understand why Colombia is the way it is: violent, charismatic, corrupt, happy, swimming in cocaine, a tragic beauty.

The main culprit is always corruption. This is a country where the top anti-corruption official is arrested on charges of corruption, where the anti-kidnapping cops are found running their own abduction rings, where drug cops are found on the cartel’s payroll. Daily stories emerge of politicians, police officers, military officials, public servants on the take. And still the corruption rolls on. Corruption keeps the country ignorant; it distorts. Corruption kills.

“Where you’re from, the politicians don’t steal everything?” asks Pedro.

“No! There are corrupt people …”

“But less than here? Here they steal everything … We should have the best highways in the world, but look at them … We need schools, highways, we need business. What are we going to do with yuca and coffee if people don’t have the money to buy them?”

This is frustrating. I’ve heard it all before. I ask: How will it ever change if Colombians don’t change it and throw out the corrupt politicians? 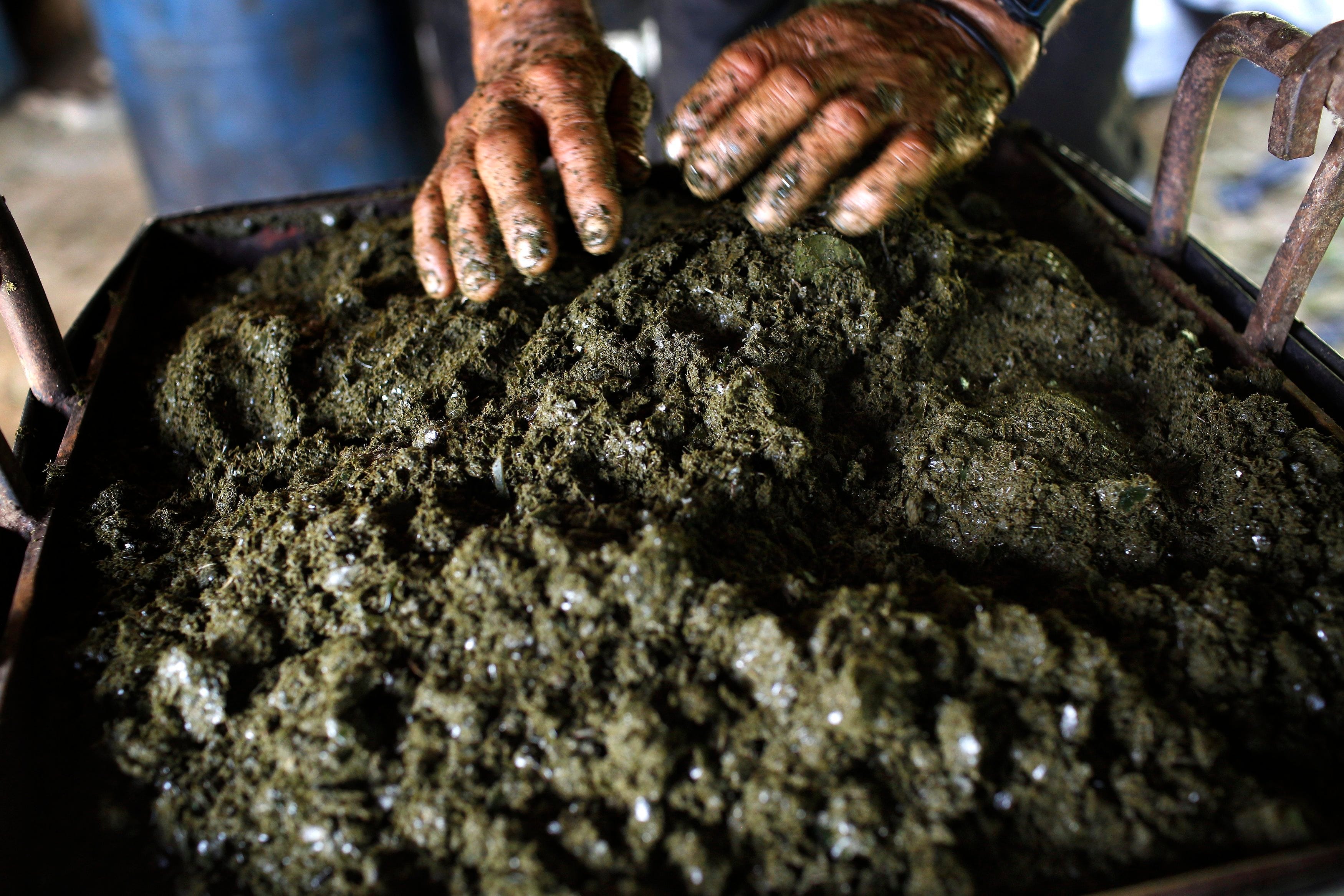 AP Photo/Rodrigo AbdA farmer puts mulched coca leafs sprinkled with cement and soaked in gasoline into a press to squeeze out the basic liquid extract of coca paste, in Antioquia, January 7, 2016.

A history of political violence that murdered would-be reformers has taught Colombia to be cynical. It’s a widespread cynicism that often assumes the worst, that treats every accident as one more piece of treachery. The cynicism has become the bane of too many. If the game is rigged beyond hope, what’s the point of trying to change things, too many ask. They have convinced themselves nothing will change. I’ve never met a people so proud of their ability to live through anything, but so pessimistic about the chance of changing it.

I ask about the FARC’s peace process.

“War and cocaine. Everyone gets rich off of both. That’s why it won’t end,” says Pedro. “This industry isn’t what it used to be,” says Pedro. “Before, the coca farmers made good money. They sold their coca, spent the weekend with two, three prostitutes, brought their whiskey, and returned home with still enough money to make the wife happy. Now …” His voice trails off.

The reason is that the price of coca has remained the same for the past twenty years. All other prices have gone up â€” the prostitutes, the booze, food â€” but the coca paste still sells at around $US400. Yet it’s all they have got. This part of the country has been growing coca for the past three decades, but no one’s seen as much coca as there is now.

The chat is winding down. It feels like there’s not much more to say. The mulch of coca is spread across the floor. Carlos tosses an ammoniac solution over it. He dusts that with a mix of cement, lime powder, and ammonia. The ammonia fills my lungs, like a chemical weapons attack. I rush outside and gasp the air. The workers in the laboratory laugh.

Two of the workers march up and down over the mulch, mixing it all together with their rubber boots. They look like old Italian grandmothers crushing grapes for wine. They smirk, aware of how ridiculous it looks. For all the billions made, the production is still rustic. 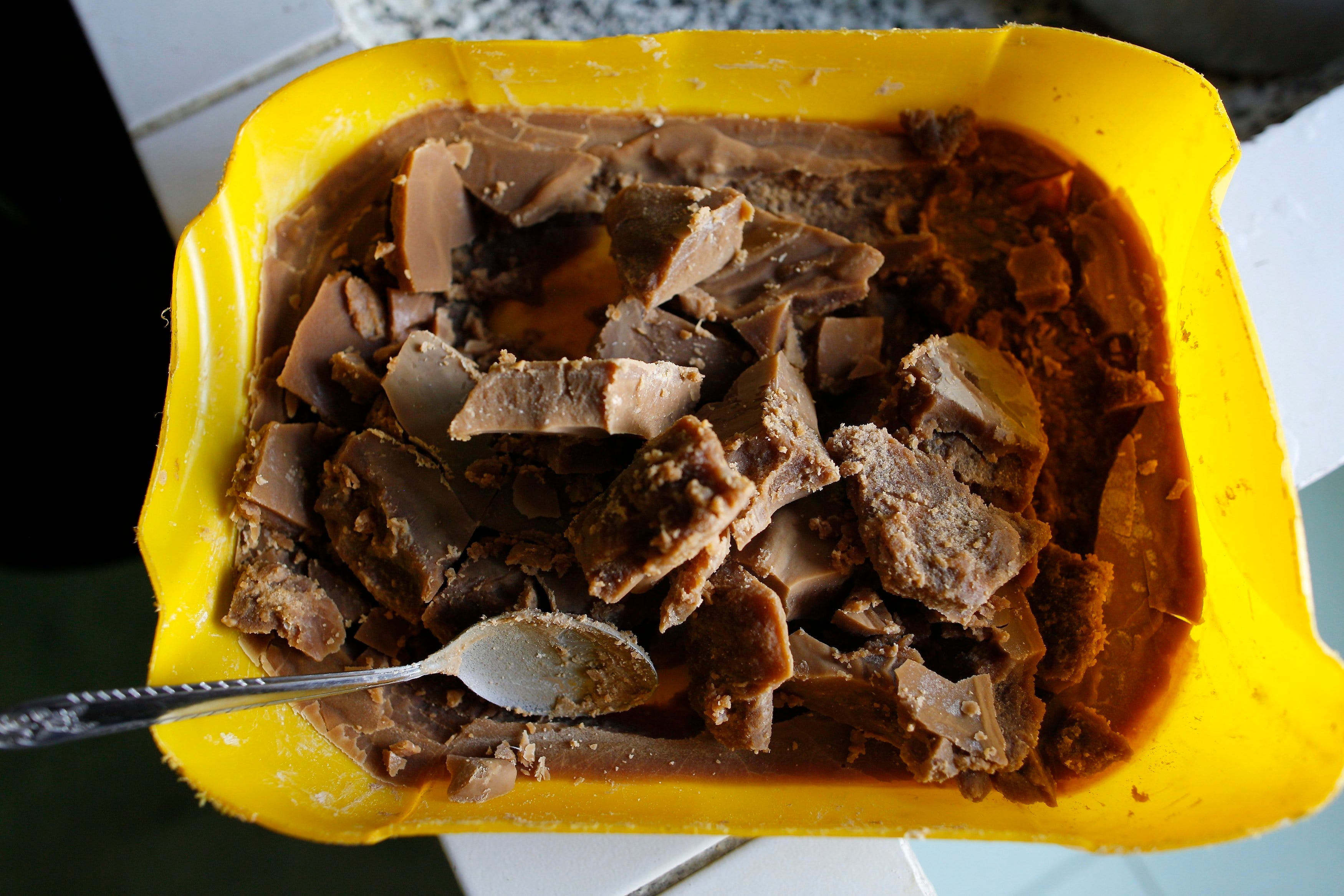 AP Photo/Rodrigo AbdCoca paste ready for sale sits in the kitchen of a home in Antioquia, January 7, 2016.

The mulch is shoveled into huge metallic barrels and the gasoline is added. Around seven of these barrels are needed to hold the ton of coca leaves. There it’s left to sit for three days. The gasoline extracts the coca base.

They roll out drums packed three days earlier. The drums are drained. The gasoline now holds the cocaine alkaloid. A filthy mulch is left behind in the drum and that’s tipped out into mounds next to the lab, out in the open in the clearing.

At one corner of the clearing is a muddy chute that leads to a stream. It carries all the chemicals and dredge straight to the pristine streams. This happens thousands of times a day across this country, acids and gasoline dumped in the streams. Add the thousands of acres of rain forest chain-sawed down to make way for new fields of coca, and cocaine ain’t exactly environmentally friendly.

Pedro’s pouring out the final solution into a barrel, passing it through cloth, ensuring any solids are left behind.

“Dip your finger in and lick it.”

I lick my finger gingerly. It tastes of gasoline and immediately puts my tongue to sleep. That was cocaine’s big break- through: as an anesthetic back in the 1880s.

This solution will dry and solidify and become coca paste â€” one step short of pure cocaine. A ton of coca leaves has been turned into a kilo and a half of coca paste.

Pedro grabs one that dried out today, a dirty whitish and yellow solid blob.

“A kilo and a half!” he says, putting it in a tatty plastic bag. He steps out of the lab and gets on his motorbike and revs the engine. He’ll drop the coca off with the farmer who owns the coca field, passing the coca paste up the next link of the chain. The motorbike’s gas tank has a sticker: If God is with me, then who would be against me?