McDonald’s CanadaThe filmmaker behind Super Size Me is going after the fast-food industry again.

Morgan Spurlock, the filmmaker behind Super Size Me, is going after the fast-food industry again in a sequel to his hit 2004 documentary that skewered McDonald’s.
This time, he’s focusing on the chicken industry.

The sequel, called Super Size Me 2: Holy Chicken!, is focused on how major fast-food chains develop, cook, and market chicken products. It will debut at the Toronto International Film Festival in September, Variety reports.

We don’t know yet what restaurants are going to be featured in the film, but given the filmmaker’s history of hammering McDonald’s, it’s probably a safe bet that he’ll pick on the Golden Arches again.

McDonald’s has made an effort recently to be transparent about its food processes.

Here’s how the chain’s chicken nuggets are made, according to
a video by McDonald’s Canada.

Here's a photo of so-called pink goop that often gets associated with McNuggets. 'We don't know what it is or where it came from, but it has nothing to do with our Chicken McNuggets,' says Nicoletta Stefou, the supply-chain manager at McDonald's Canada. The process of making McNuggets starts in the 'deboning department' with whole chickens. 'First, we separate all of the chicken cuts and set aside the chicken-breast meat for the Chicken McNuggets,' says Jen Rabideau, a product-development scientist for Cargill. Workers trim the chicken breasts of fat and send them along an assembly line. The chicken breasts that have been separated are collected into this bin. The cart of chicken-breast meat travels across the factory to the 'blending room.' Here, the chicken is pushed into the blending room, which is essentially a giant chamber that will transport it to the blender. Inside the blending room, the cart of chicken breasts is lifted off the ground. The meat is then dumped into the grinder. The mashed-up meat pours out of the grinder and straight into the blender. Inside the blender, the ground chicken meat is mixed with some seasonings and chicken skin for flavoring. The meat is removed from the blender, and Stefou points out that there's no pink goop to be found. But they aren't McNuggets yet, so let's check out how the rest of the process works. In the 'forming room,' the blended chicken meat is portioned into the four chicken McNugget shapes: the ball, the bell, the boot, and the bow tie. Then the nuggets travel down the assembly line to be covered in a light batter, which is shown in the center of this photo. After being dipped in the light batter, they are covered in a second, thicker batter called tempura. The chicken nuggets come out on the other side looking a bit like sugar cookies before they are sent into a fryer. The nuggets come out of the fryer looking ready to eat, but they have been only partially cooked. Breaking a fried nugget in half, you can see that it's a bit raw inside. The nuggets will now be frozen and sent to McDonald's restaurants, where they will be fully cooked. The frozen nuggets are bagged, boxed, and prepared for shipping. This is how the nuggets look when they arrive at a McDonald's restaurant. Finally, the boxes are marked for shipping and the process of making Chicken McNuggets is complete. 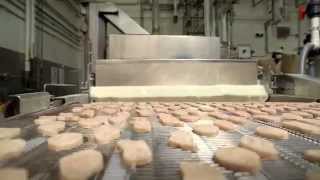