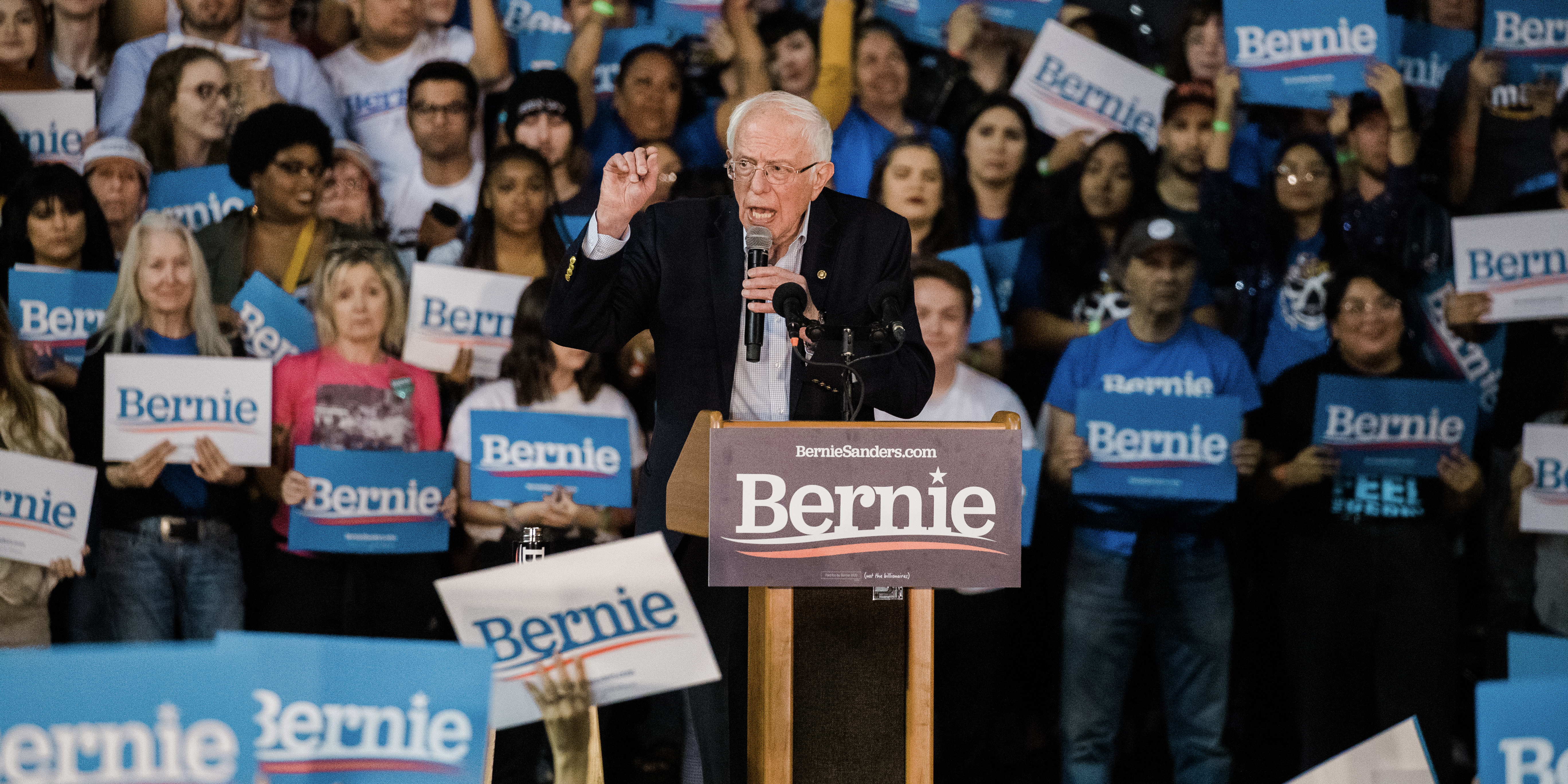 Caitlin O’Hara/Getty ImagesSen. Bernie Sanders of Vermont at a campaign rally at Arizona Veterans Memorial Coliseum on Thursday in Phoenix.

After outright winning or tying for first place in Iowa, New Hampshire, and Nevada, Sen. Bernie Sanders of Vermont seemed on an unstoppable path to the 2020 Democratic presidential nomination.

But Sanders’ big winning streak came to a screeching halt first with former Vice President Joe Biden’s big win in the South Carolina primary and then in the March 3 Super Tuesday contests, in which 15 states and territories held primaries and caucuses to allocate about 35% of national pledged delegates to the nomination.

Coming off his South Carolina victory, Biden consolidated much of the party behind his candidacy and won 10 Super Tuesday contests, including in largely liberal states like Minnesota, Maine, and Massachusetts that Sanders carried in 2016 and was favoured to win again.

Entering this Tuesday’s primary contests, Biden now holds a massive delegate lead over Sanders that he is poised to widen in states like Mississippi, Missouri, and Michigan.

Since South Carolina, Biden has dominated Sanders among black voters, who made up a substantial proportion of the Democratic primary electorate in key Super Tuesday states like Alabama, North Carolina, Tennessee, and Arkansas.

Biden won big not only in the suburban areas of states like Virginia and North Carolina with high proportions of college-educated residents, but also in the rural and predominately working-class parts of states like Oklahoma, Minnesota, and Maine that Sanders easily swept by big margins in 2016.

Voter turnout surged by over 60% compared with 2016 primary levels in big, delegate-rich states like Virginia and Texas, but the higher turnout among white, black, rural, and suburban voters alike benefited Biden and not Sanders – the opposite effect of what Sanders’ campaign had been banking on.

The most impressive aspect of Biden's performance yesterday was its breadth: he won urban voters, upscale & middle-class suburban voters AND rural/Appalachian voters.

Just about the only places he didn't win were heavily Latino or progressive activist hotbeds like college towns.

Beyond Sanders failing to turn out young voters in particular on Election Day, some election analysts theorise that because Clinton was a far more unpopular and polarising figure than Biden, Sanders’ 2016 primary voters may have been more negatively motivated to cast a vote against Clinton than positively motivated to explicitly vote for Sanders and his platform.

Democratic primary polls fielded after Super Tuesday are showing Sanders pulling in about 2/3rds of his 2016 vote share on average. He’s doing worse in whiter states, which fits our theory about the anti-Hilalry vote (which was bigger among whites) fueling his 2016 campaign.

Here is something big that is different than 2016, via the new @QuinnipiacPoll.

While Colorado, Maine, Utah, and California have already been called for either Biden or Sanders, they are still fully counting all mail-in and absentee ballots, meaning we don’t yet have 100% of the returns reporting from those states and can’t fully map the county-by-county results.

Here’s how Sanders’ performance in 2020 Super Tuesday states compares with how he did in the same states in 2016:

On Super Tuesday 2020, Sanders emerged victorious in California, which he lost in 2016, but lost Oklahoma, Maine, and Minnesota — all of which he carried in 2016 — to Biden. 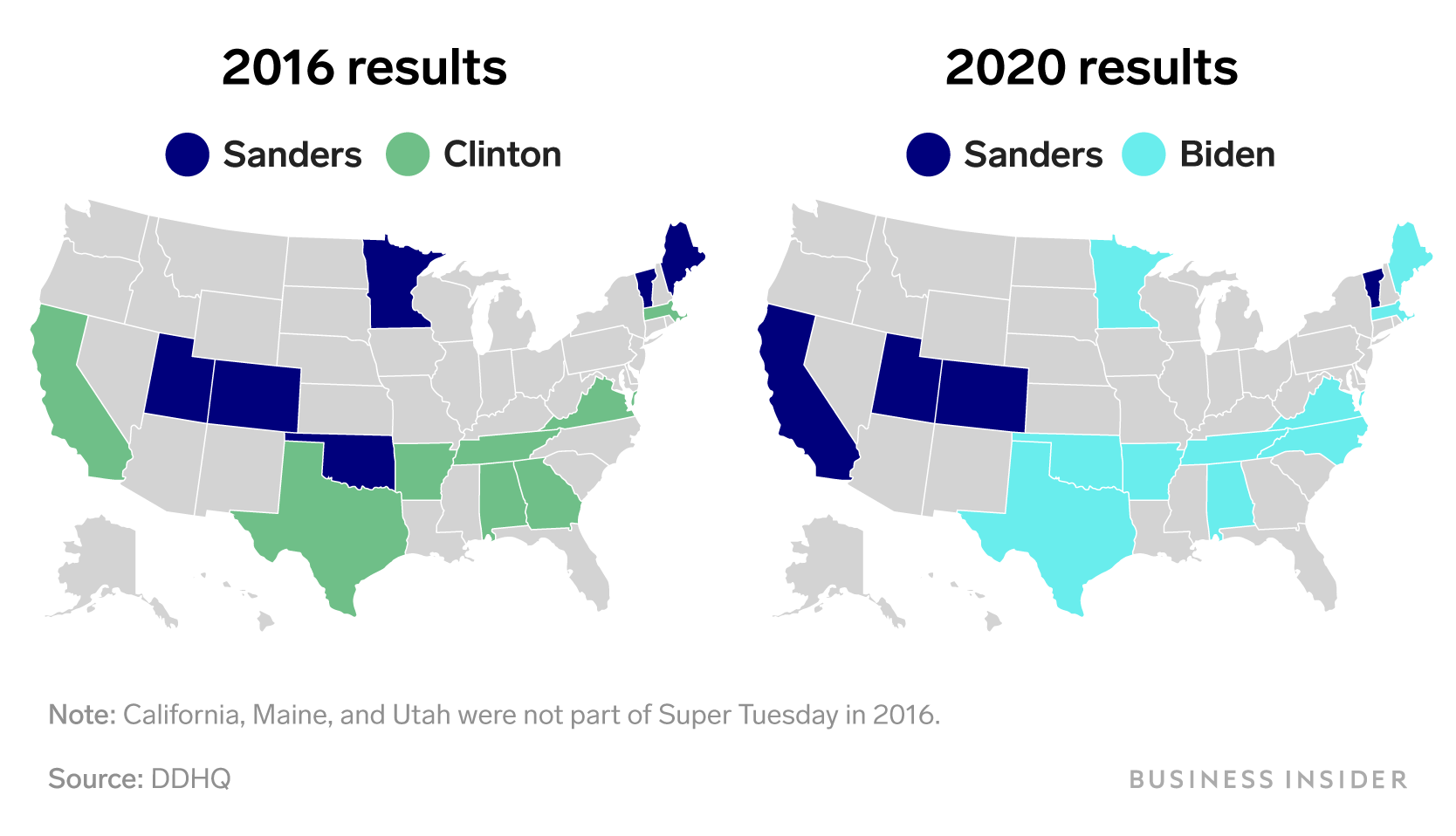 In 2016, Sanders won Oklahoma, Minnesota, and Maine by 10, 24, and 29 percentage points, respectively, over Hillary Clinton. He lost all three states to Biden in 2020.

As the chart notes, California, Utah, and Maine switched their primaries to Super Tuesday for 2020.

In 2020, Sanders slightly underperformed his 2016 support in Alabama by about 2.5 percentage points. 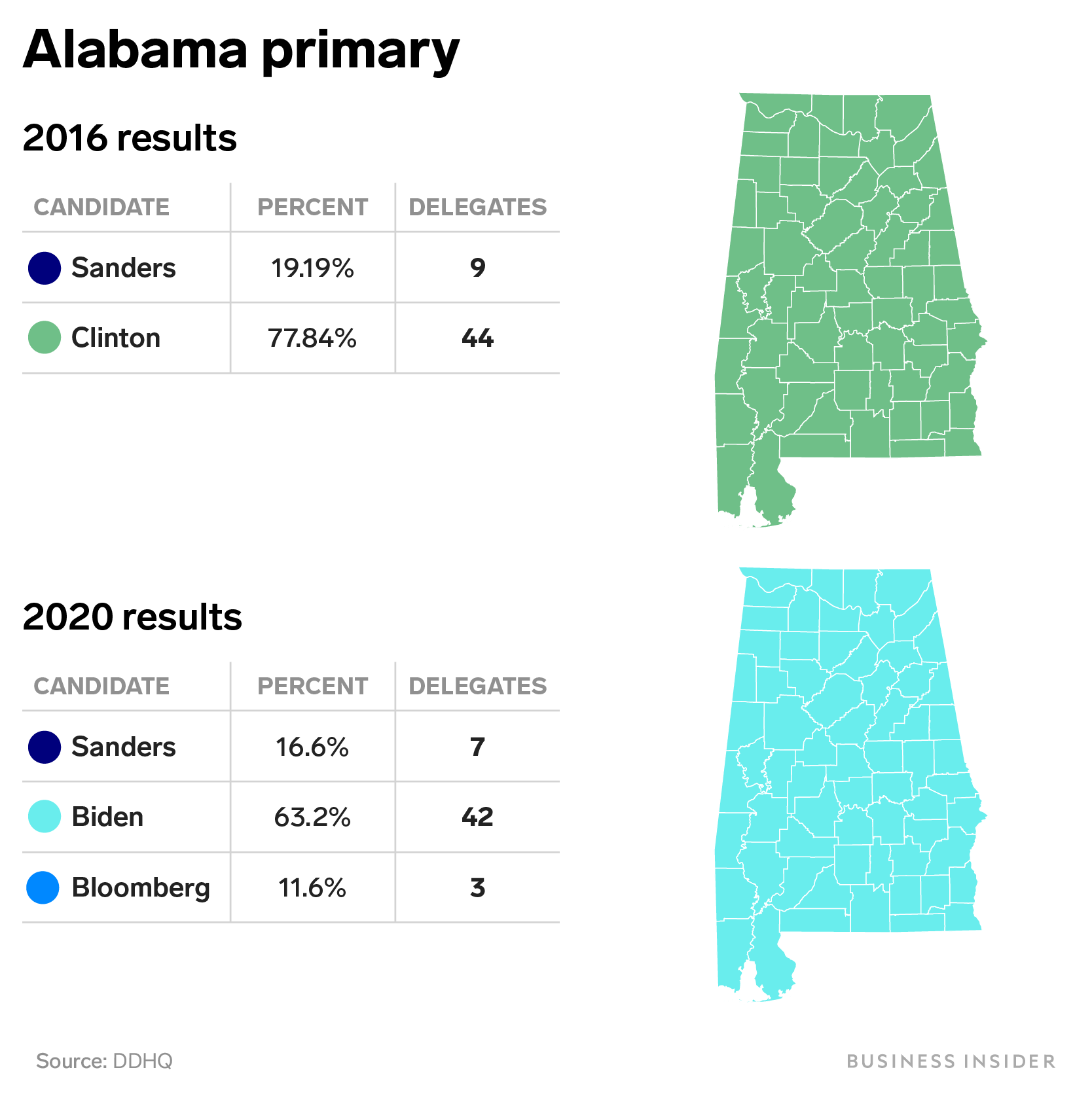 In both 2016 and 2020, Sanders was handily defeated by his rivals in Alabama and didn’t win a single county in either cycle. 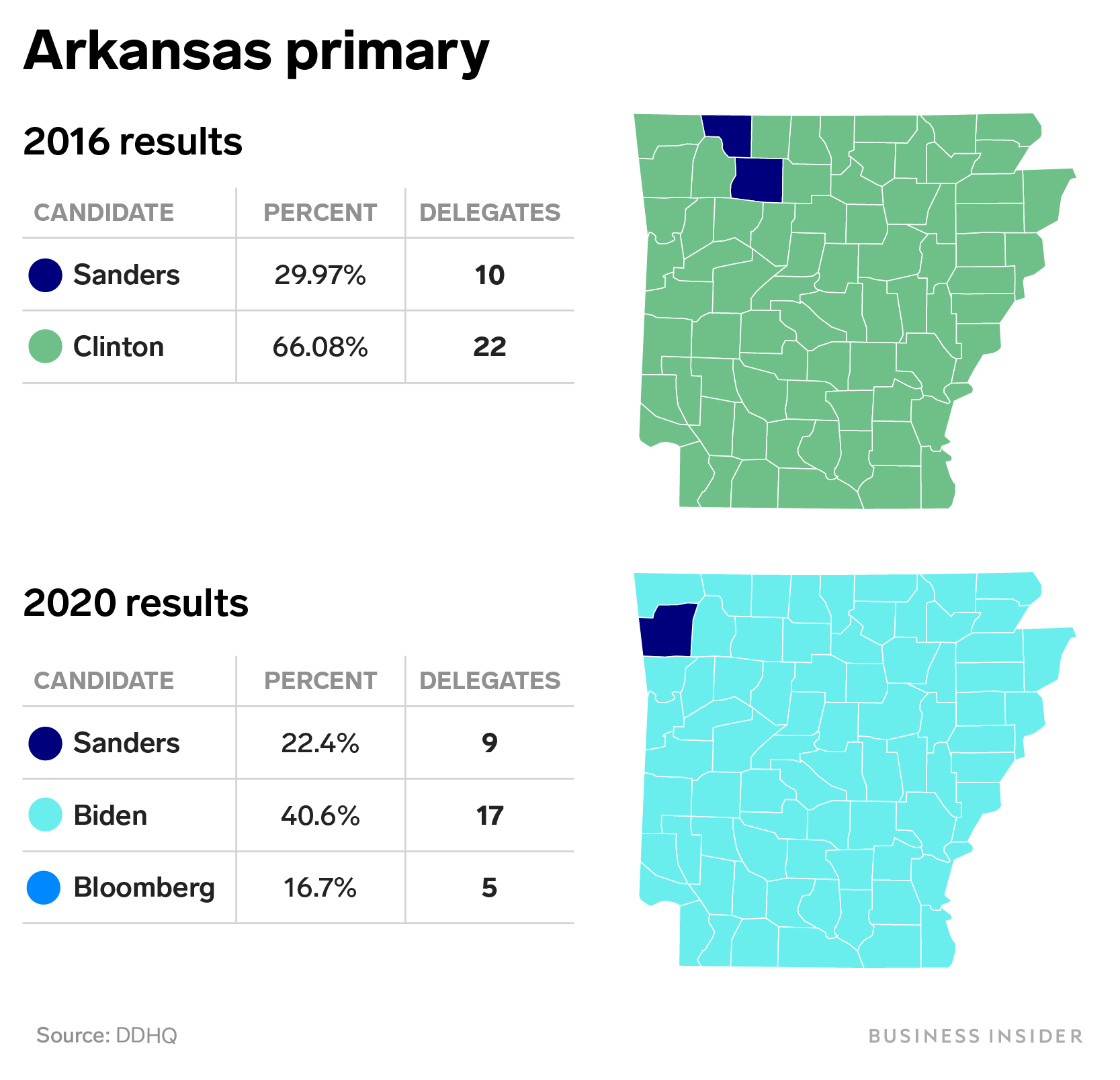 California, which moved up its primary from June to Super Tuesday in March for 2020, is the only state so far that Sanders lost in 2016 but is expected to win in 2020. 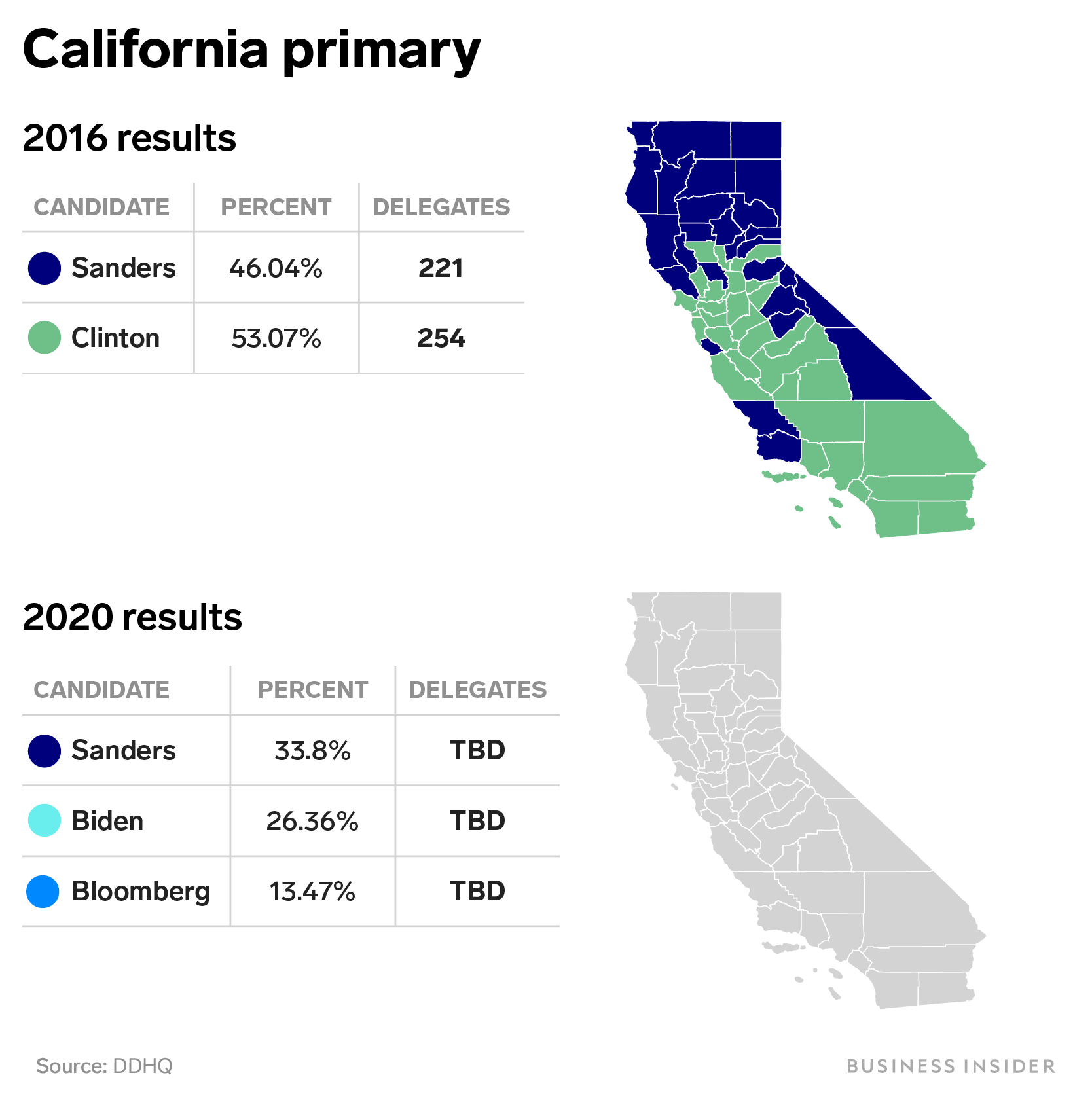 While Sanders still won Colorado in 2020, his share of the vote fell by 22 points. 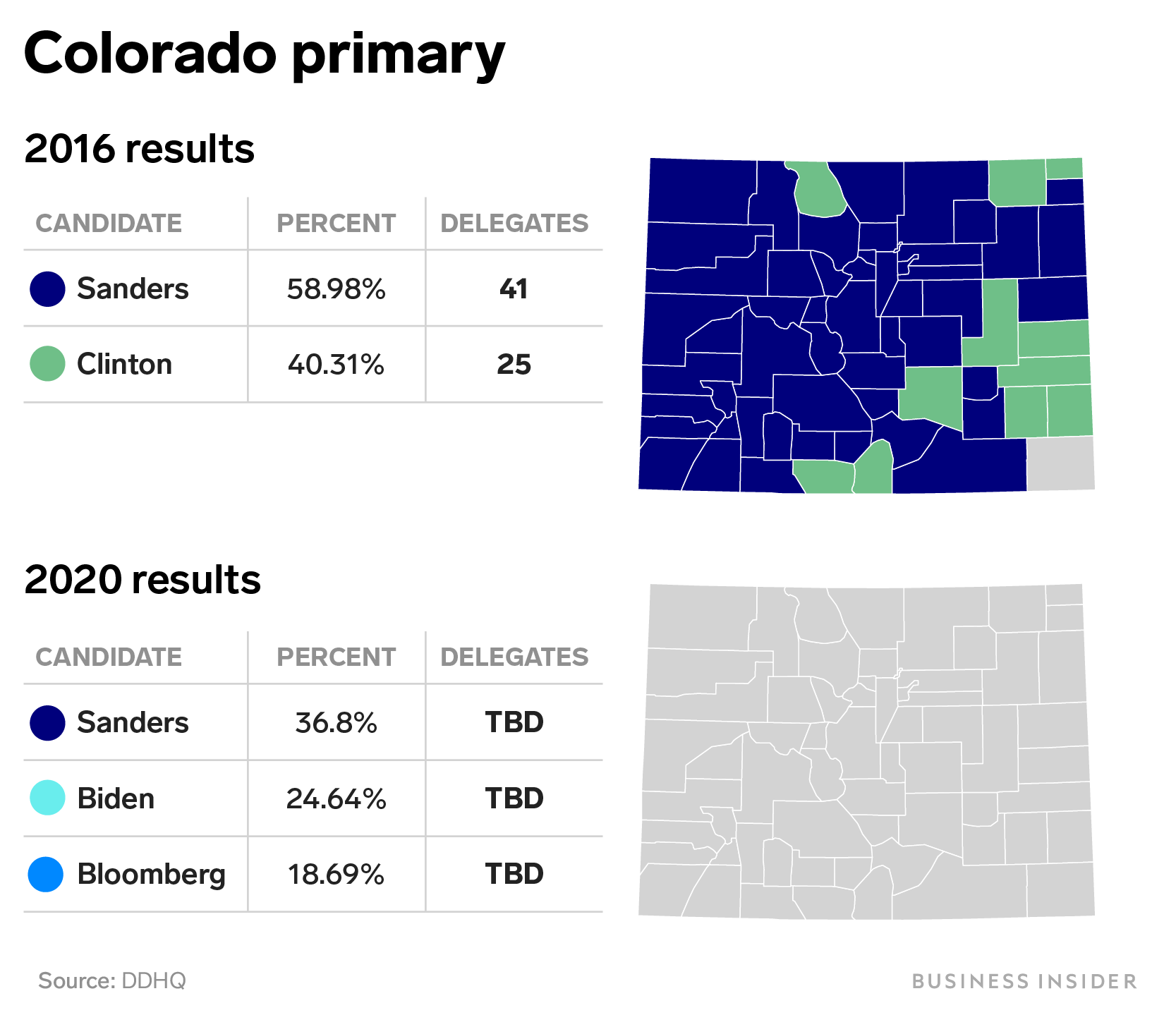 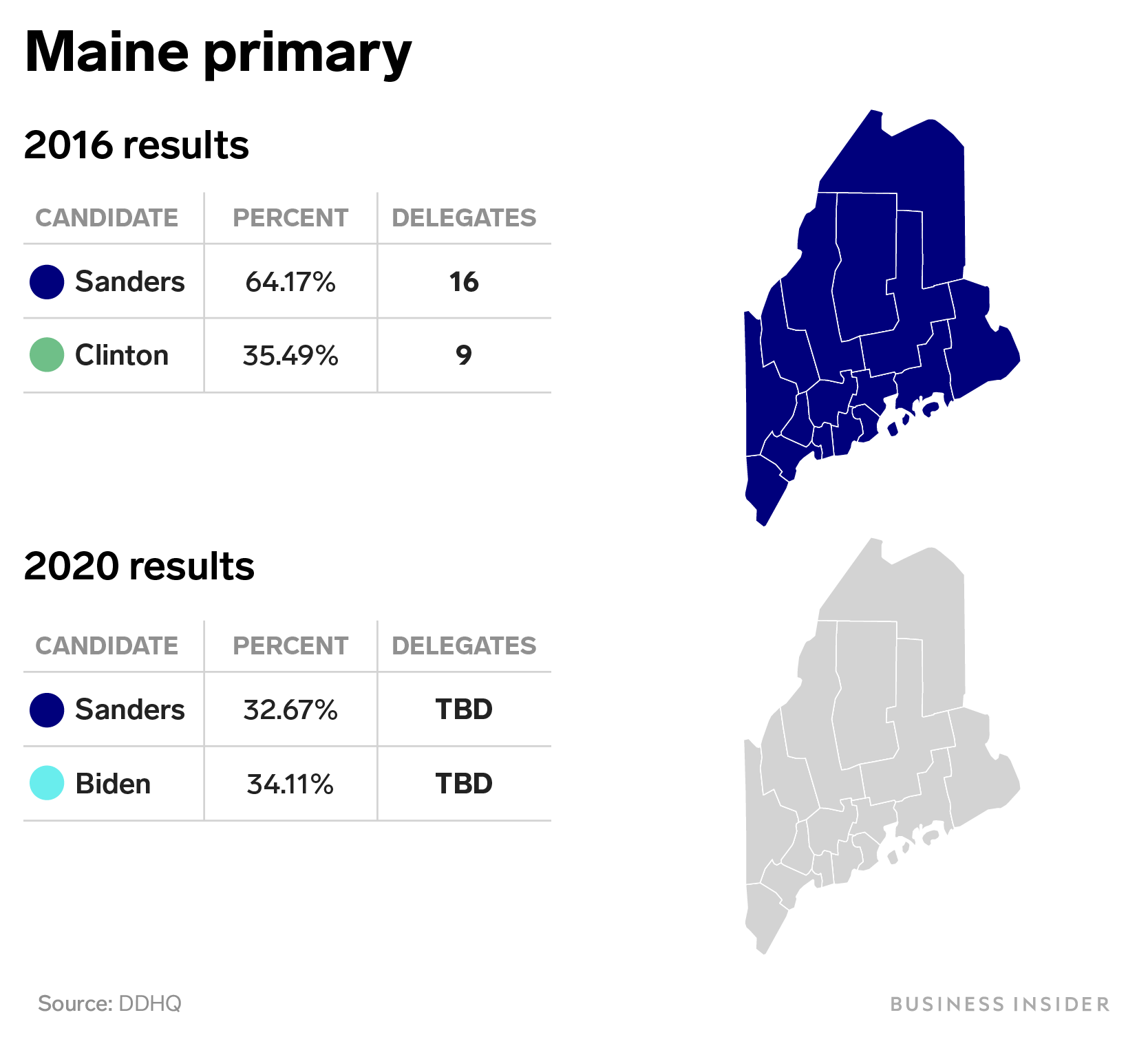 Sanders’ vote share in Massachusetts plummeted by almost 20 percentage points from 48% in 2016 to 26% in 2020, finding himself squeezed on both sides by Biden and Sen. Elizabeth Warren. 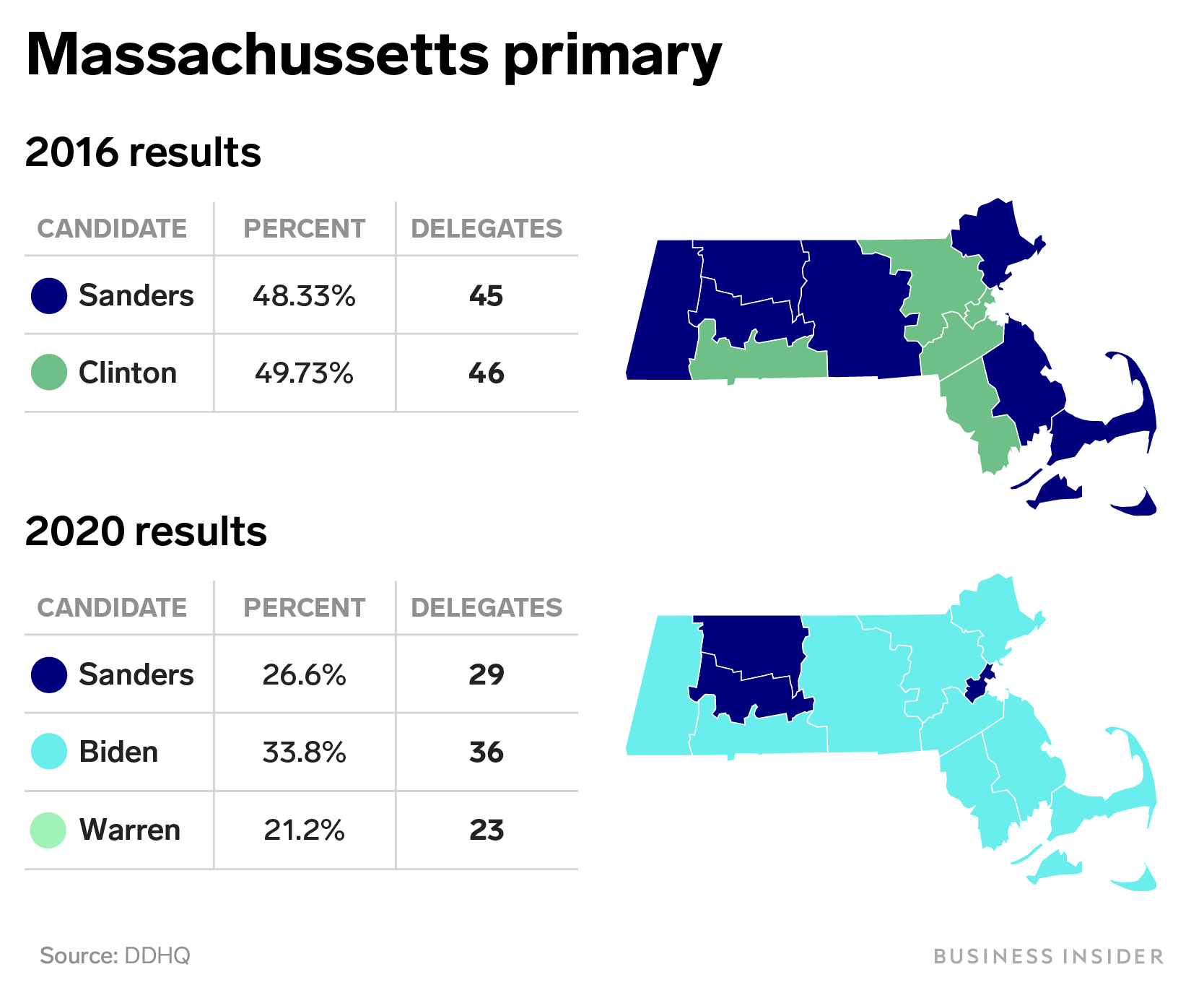 In 2016, Clinton eked out a narrow win over Sanders in Massachusetts. But in one of the biggest upsets of Super Tuesday 2020, Biden carried the state by 7.2 percentage points.

Sanders picked up control of Suffolk County, which includes Boston, and held control of Franklin and Hampshire counties in Western Massachusetts, but lost every other county he won in 2016.

Biden thoroughly defeated Sanders in Minnesota on Super Tuesday. Sanders’ vote share in the state fell by nearly 32 percentage points, from 62% in 2016 to 30% in 2020. 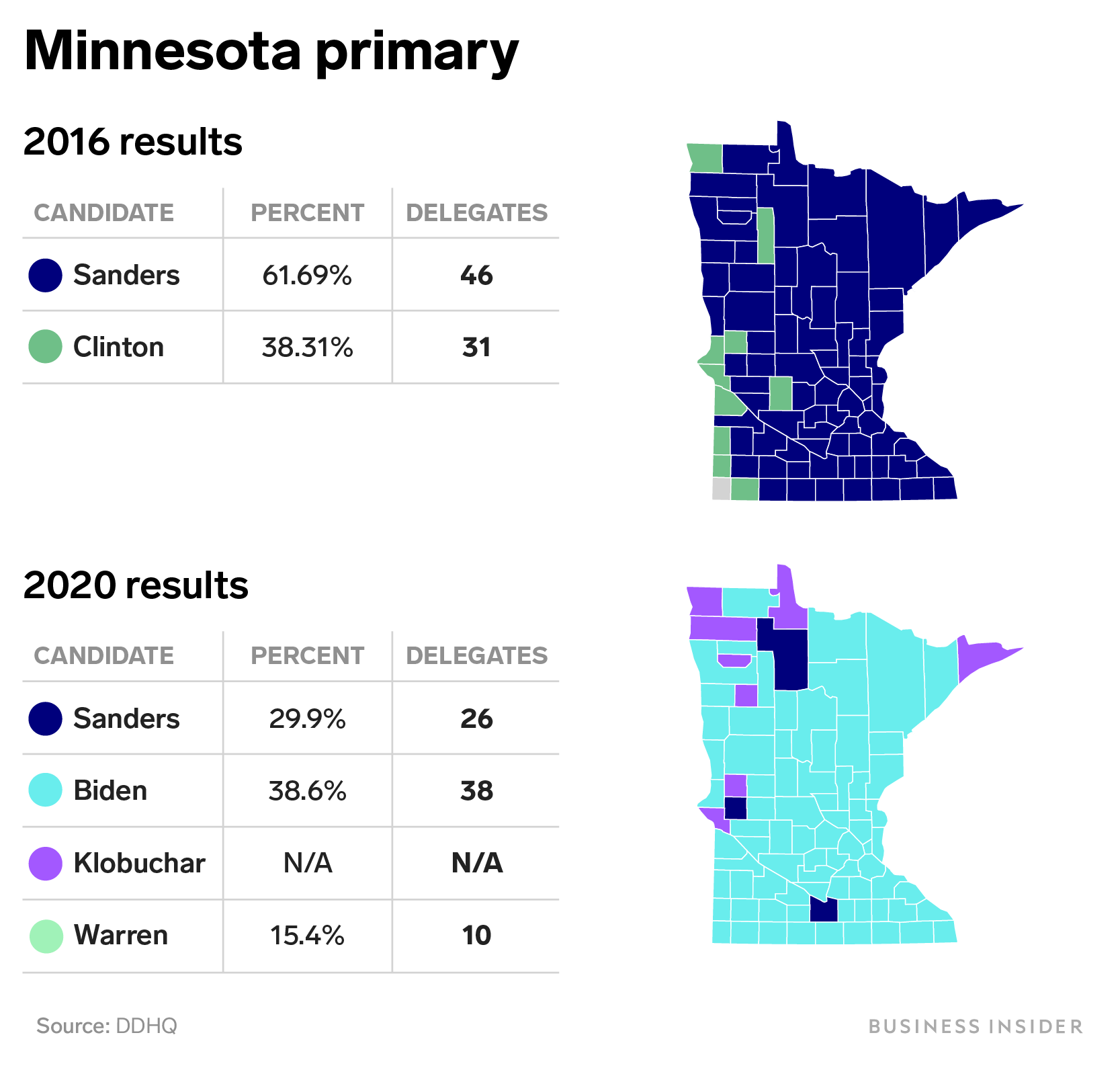 In another huge Super Tuesday upset, Biden won Minnesota – where Sanders had led the polls – after its home-state Sen. Amy Klobuchar dropped out of the race the day before the election and endorsed Biden.

Sanders’ vote share in North Carolina fell by 17 percentage points between 2016 and 2020. 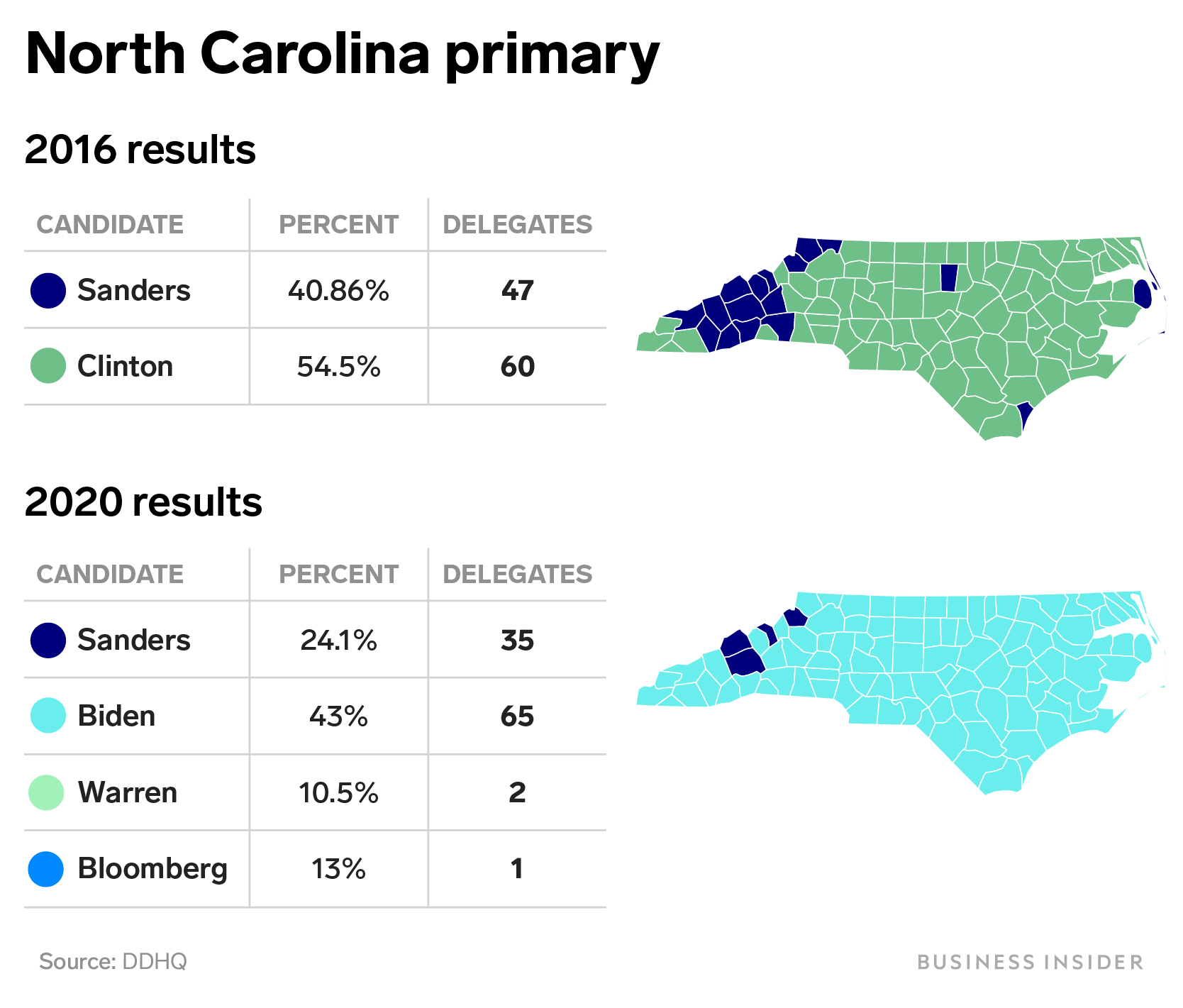 As the map shows, Sanders particularly lost ground between 2016 and 2020 in the Appalachian Mountains region in the Western part of the state, which is disproportionately white, rural, and working class.

Oklahoma was one of two Super Tuesday states that Sanders overwhelmingly carried in 2016 but lost in 2020, with his vote share in the state falling by almost 27 percentage points. 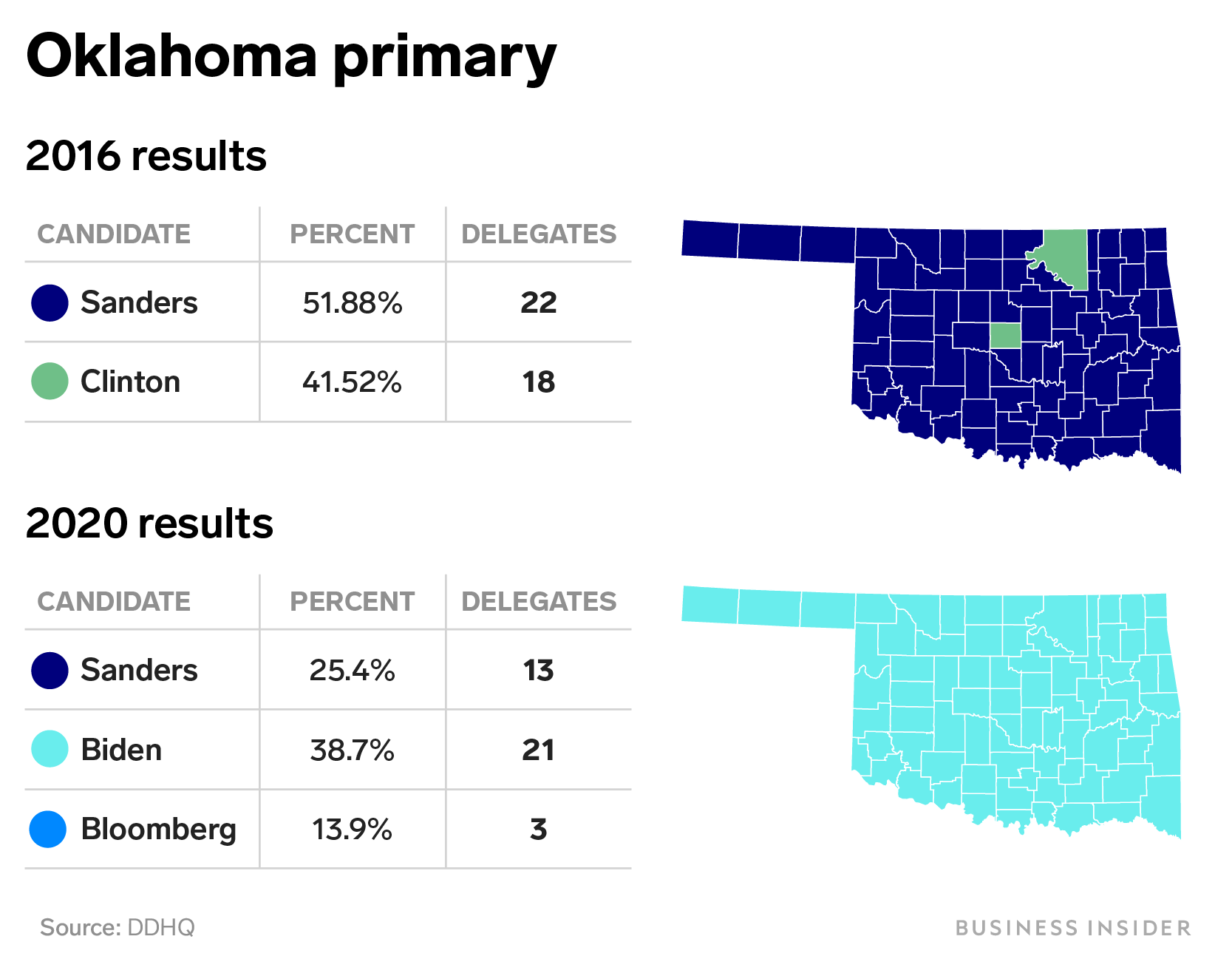 In 2020, Biden carried every county in Oklahoma.

In Tennessee, Sanders won about 8,000 more votes in 2020 compared with 2016, but he saw his share of the vote total decrease by over 7 percentage points. 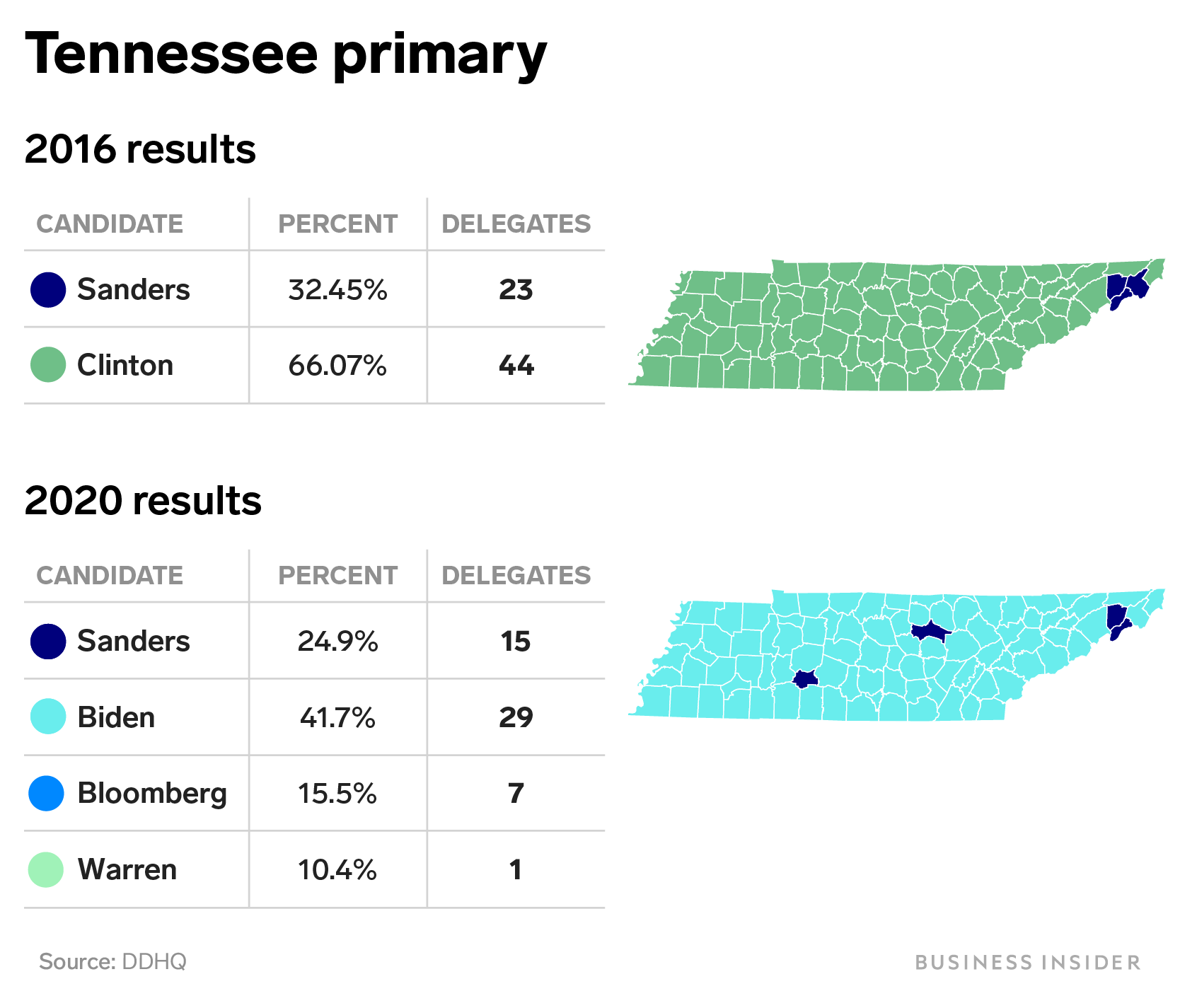 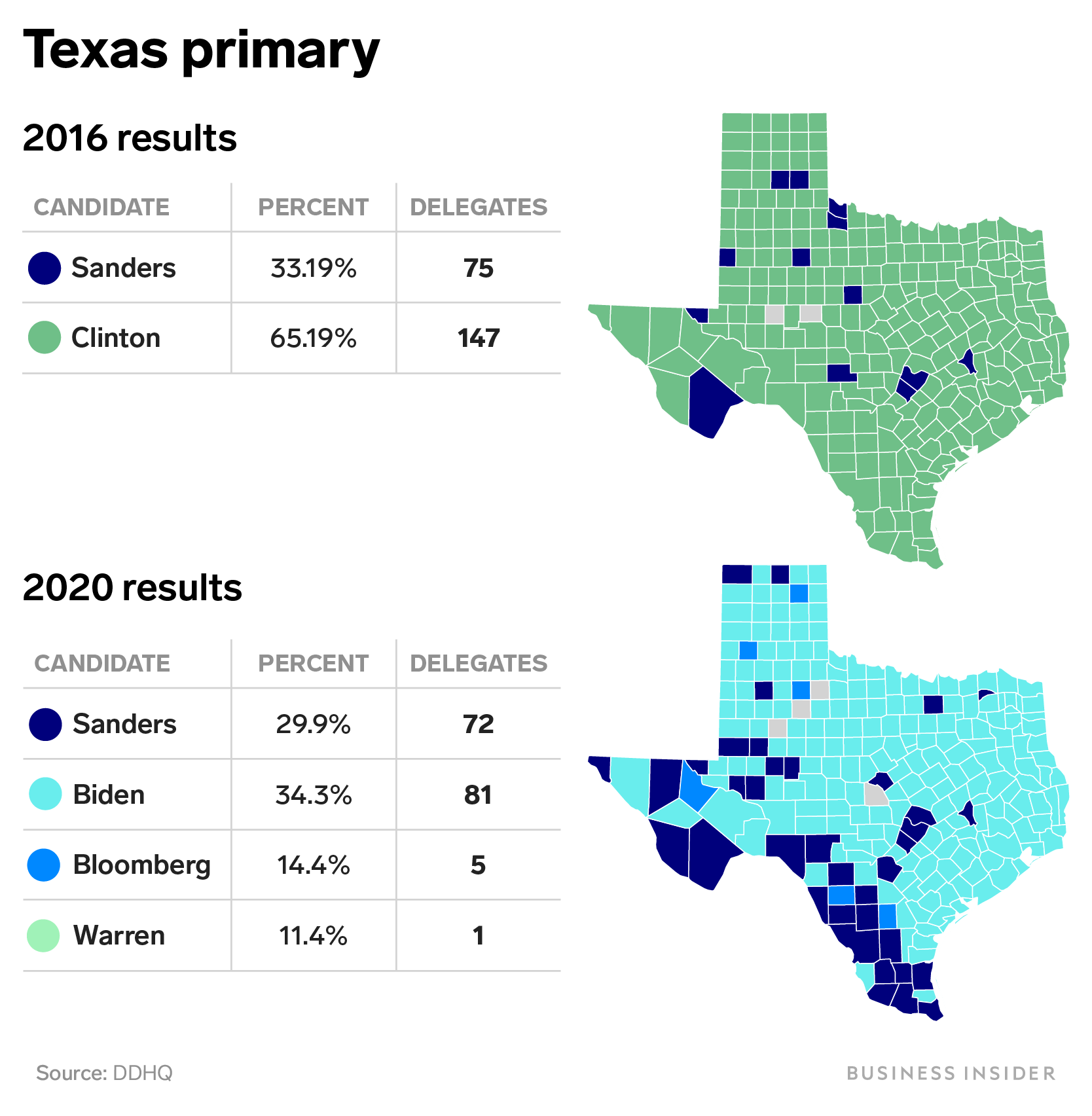 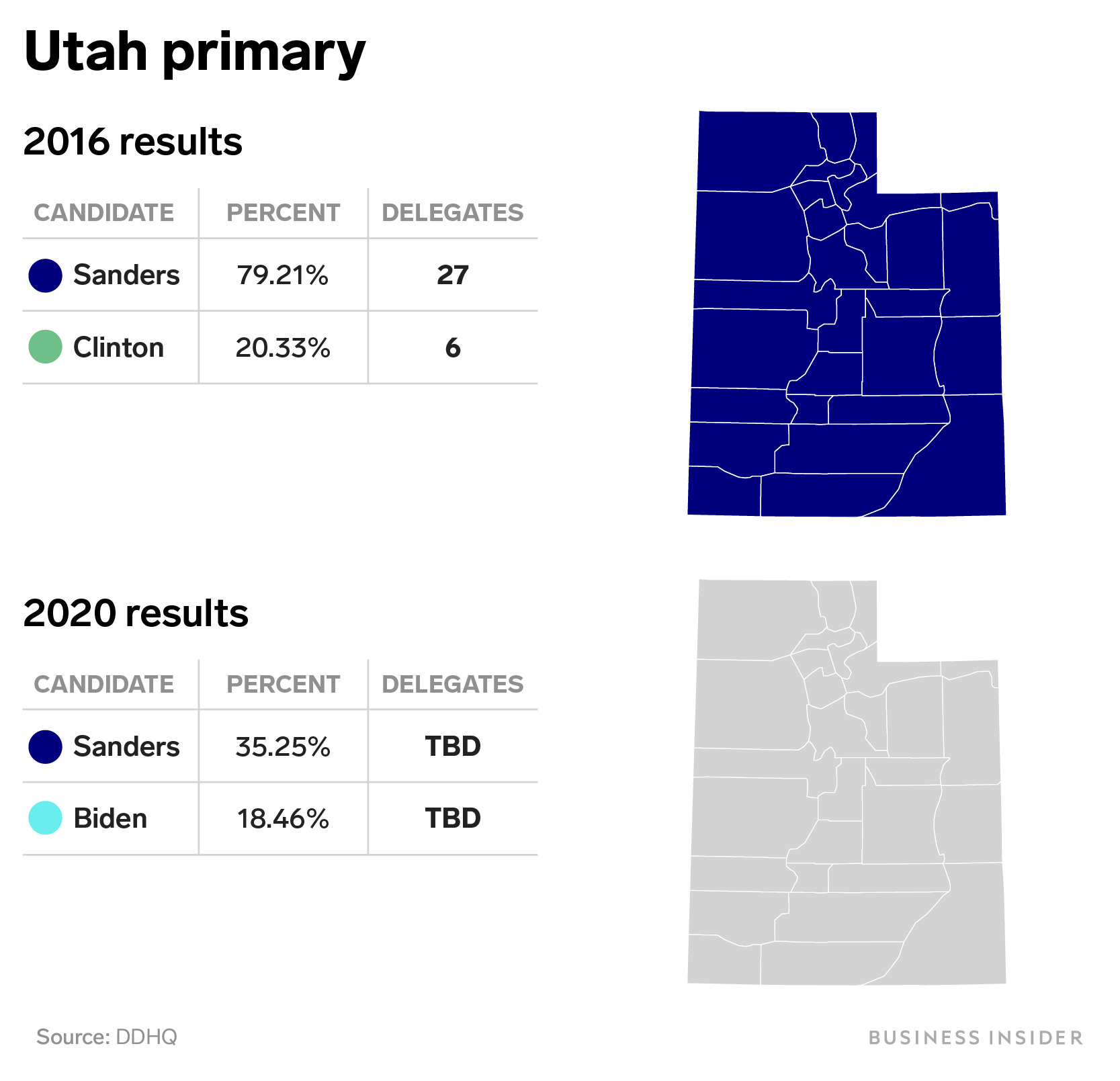 Sanders carried his home state of Vermont in both 2016 and 2020 but saw his margin of victory drastically fell by 72 percentage points in 2016 to 29 points over Biden this year. 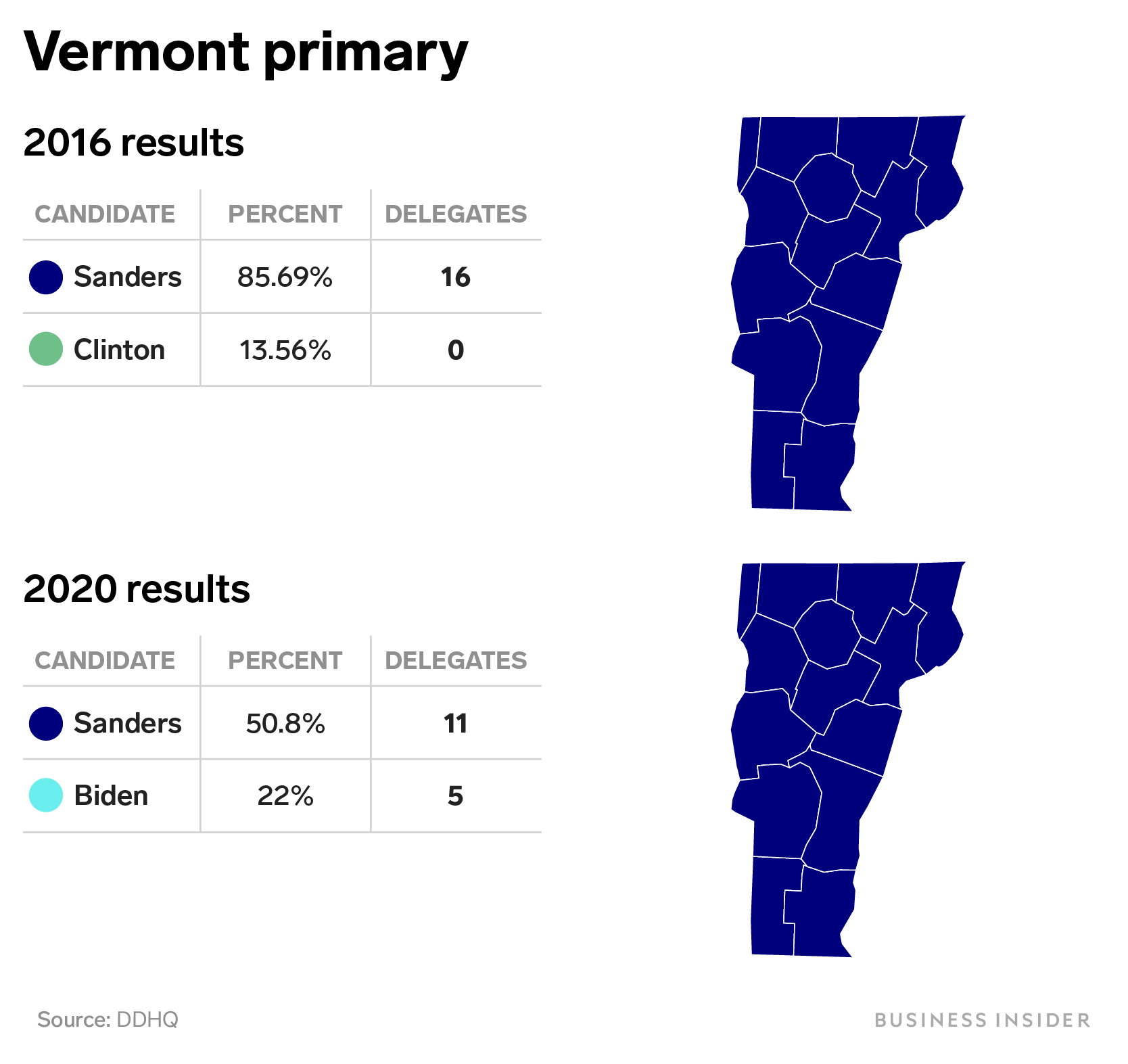 Sanders’ share of the vote in Virginia fell by 12 percentage points between 2016 and 2020 as voter turnout in the state’s primary dramatically increased by almost 70%. 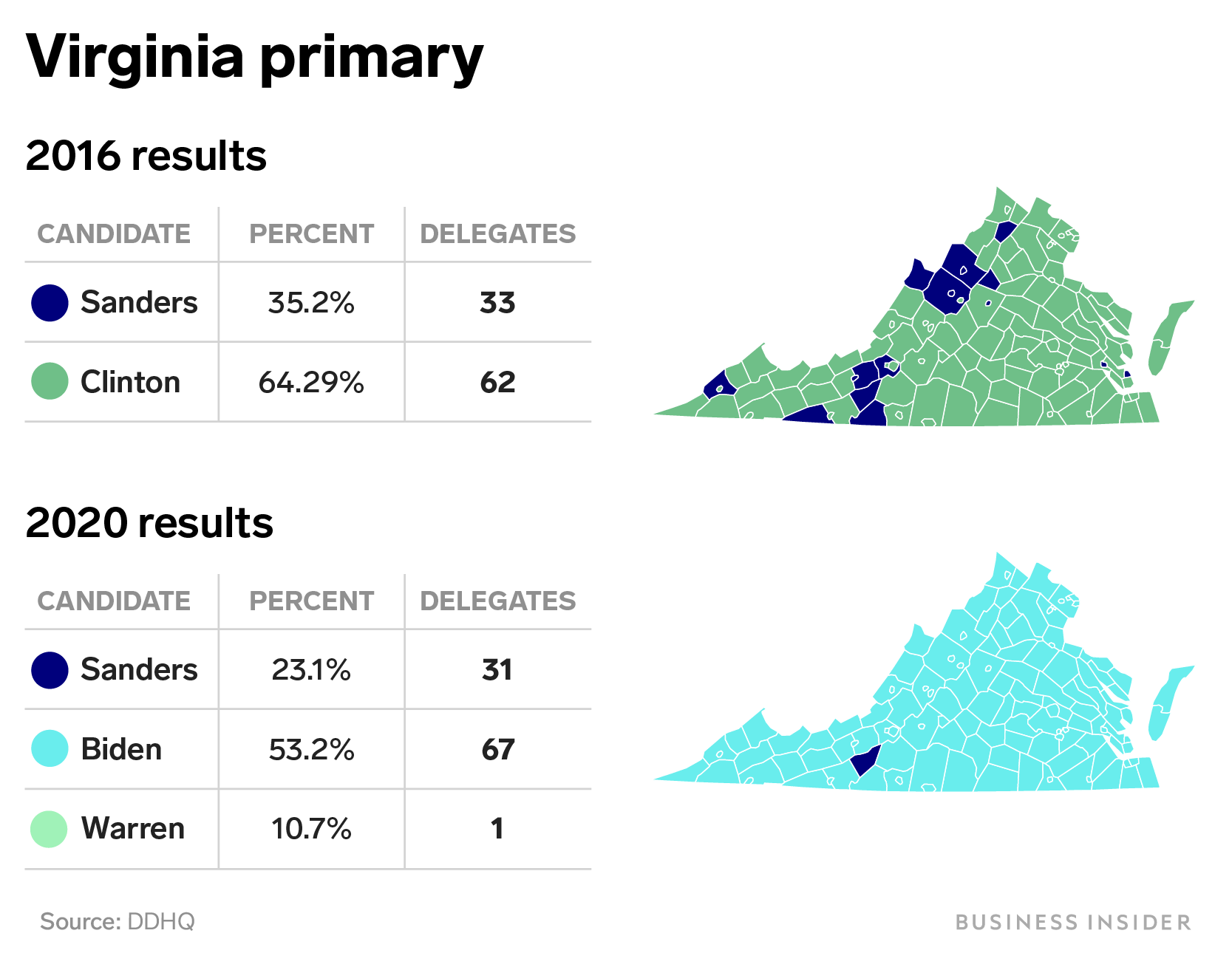