We're $12.3 Trillion Poorer Than We Were Three Years Ago 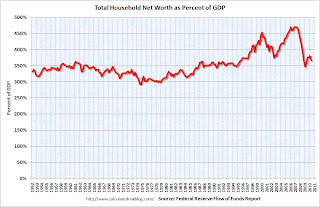 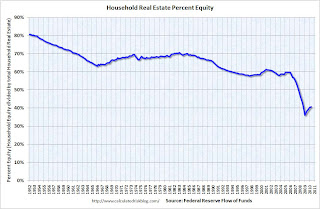 Household per cent equity (as measured by the Fed) collapsed when house prices collapsed in 2007 and 2008.

Note: something less than one-third of households have no mortgage debt. So the approximately 50+ million households with mortgages have far less than 40.7% equity. 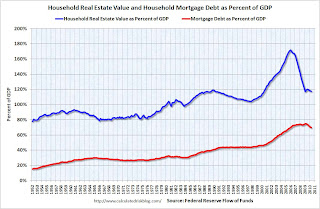 Mortgage debt declined by $49 billion in Q2. Mortgage debt has now declined by $463 billion from the peak. According to an analysis by the WSJ, most of the decline in debt has been because of defaults, see: Defaults Account for Most of Pared Down Debt

As house prices decline further, I expect the per cent equity to decline and household net worth to fall.