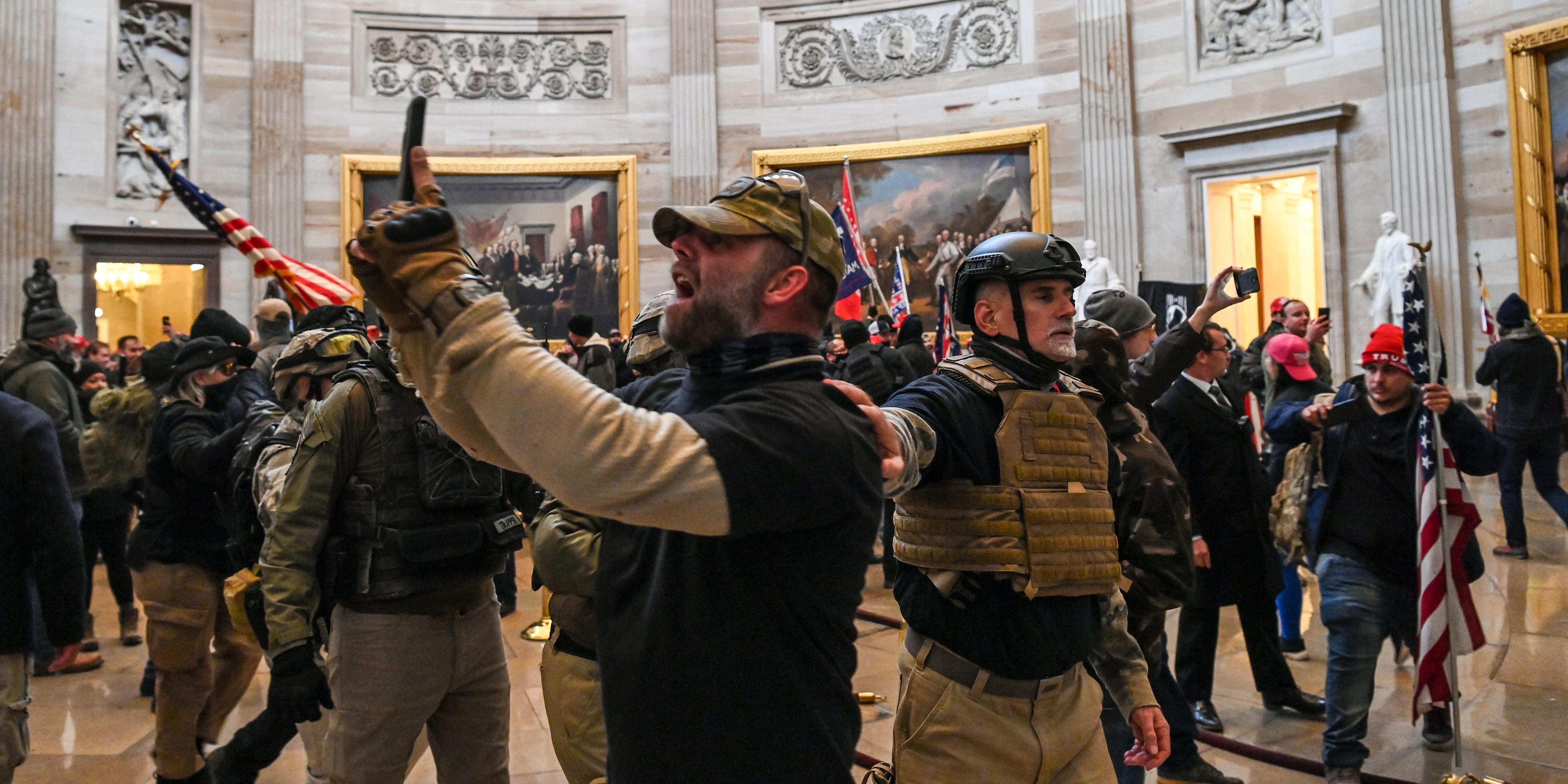 SAUL LOEB/AFP via Getty ImagesSupporters of US President Donald Trump enter the Capitol’s rotunda on Wednesday.

The House and the Senate abruptly went into recess on Wednesday after crowds of supporters of President Donald Trump descended on the Capitol building, breached barriers, and clashed with police officers.

After the building was evacuated, House Minority Leader Kevin McCarthy said on Fox News that someone had been shot. PBS NewsHour reported, citing one source, that someone was shot in the chest in the Capitol and that it was not a uniformed officer.

The violence erupted as Congress convened to officially count electoral votes and certify President-elect Joe Biden’s victory. The process is typically pro forma, but it’s in the national spotlight this year because Trump has made groundless claims that Congress and Vice President Mike Pence can unilaterally throw out the electoral votes in some battleground states based on Trump’s unsubstantiated assertion that votes were fraudulent.

Shortly before the clashes, the president headlined a “March for Trump” rally in Washington, DC, where he continued ginning up nonsense conspiracy theories about widespread voter fraud, a rigged election, and a global faction of Democrats working with election vendors to steal the 2020 race from Trump.

There is no evidence for any of these claims, and all 50 states had certified their results as of last month.

The Capitol building was placed on lockdown as frenzied Trump supporters attempted to break in while Congress met. Multiple reporters tweeted that they were told to shelter in place, and the House and the Senate were evacuated when the president’s supporters stormed the building.

The mayor of Washington, DC, announced a 6 p.m. curfew. NBC reported that Pence and Sen. Chuck Grassley, the Senate president pro tempore, were evacuated to a secure location.

HOUSE MEMBERS ARE BEING TOLD THEY have to be prepared to get low/get down on their chairs if House floor is breached.

Holy crap. Trump supporters have broken into the Capitol building and are wandering through Statuary Hall shouting, "We want Trump! We want Trump!" pic.twitter.com/j1advKPmWE

As Trump supporters stormed the Capitol building, some reports said that they started breaking into the House chamber and that there was an armed standoff.

People are smashing glass in the doors to the House chamber. Police have guns drawn and aimed at the door

At one point, a rioter with a Confederate flag was seen outside the Senate chamber. Multiple Trump supporters flew the flag outside the Capitol.

The Department of Defence announced Wednesday afternoon that additional National Guard troops were being activated to support federal law enforcement in Washington, DC. The White House press secretary said Trump had made the decision to bolster the small National Guard force activated before the protests.

Virginia and Maryland said they were sending additional law-enforcement personnel to the city in response to the unrest. Virginia said it was also contributing National Guard personnel.

Amid the chaos, Trump slammed Pence in a tweet. “Mike Pence didn’t have the courage to do what should have been done to protect our Country and our Constitution, giving States a chance to certify a corrected set of facts, not the fraudulent or inaccurate ones which they were asked to previously certify,” he said. “USA demands the truth!”

The White House did not respond to a request for comment from CNN. But Trump later tweeted: “Please support our Capitol Police and Law Enforcement. They are truly on the side of our Country. Stay peaceful!”

“This is wrong and not who we are,” Trump Jr. tweeted. “Be peaceful and use your 1st Amendment rights, but don’t start acting like the other side. We have a country to save and this doesn’t help anyone.”