Often, while playing through “Horizon Zero Dawn,” I was stopped in my tracks by how beautiful it is. Guerrilla Games/SonyJust look at that sky!

I mean that literally. Over and over, I’d be walking — more likely running  — through the massive open world and be overwhelmed by how gorgeous it is; so much so, in fact, that I would literally stop walking and just marvel at the incredible virtual world on my PlayStation 4.

And that’s before we even start discussing the giant metal dinosaurs. But let’s back up: “Horizon Zero Dawn” is a brand new game for the PlayStation 4, available as of February 28. If you own a PlayStation 4, it’s a must-play. If you don’t, it’s a worthy reason — unto itself — to buy a PlayStation 4. No caveats — seriously! The main character, who you play as, is named Aloy. She's an outcast of a tribal culture (the 'Nora' tribe). She's been an outcast since birth. Guerrilla Games/Sony
'Aloy' is pronounced just as it looks: aye-loy.

The story of 'Horizon Zero Dawn' is Aloy's journey. Where is she from? Who is her mother? Why was she shunned at birth, doomed to be an outcast of her own culture? Guerrilla Games/Sony
Aloy was raised by a man named Rost, another outcast. You'll meet him early in the game.

And yes, before you ask, that journey also ties in to the name of the game. 'Horizon Zero Dawn' isn't just word soup -- you'll understand (and maybe even like!) the name by the end. Guerrilla Games/Sony
Unlike the stories in so many games, the story in 'Horizon Zero Dawn' is easy to follow and worth exploring.

The setting of 'Horizon Zero Dawn' is part of what makes the game so amazing: it's roughly 1,000 years in the future, on Earth. Guerrilla Games/Sony
You'll stroll through the ruins of modern civilisation. What fun!

So why have humans regressed to tribal culture? And, more importantly, what's the deal with these robot animals? These questions are at the heart of 'Horizon Zero Dawn,' and they're a major part of what makes it such a fascinating and incredible game. Guerrilla Games/Sony
While Aloy's from a tribal community, there are other cultures in the world of 'Horizon Zero Dawn.' Each culture has its own traditions, lore, and structure. Aloy's culture is a matriarchy, for instance, which worships a Mother Earth-esque goddess.

On your journey to enlightenment, you'll face a lot of challenges. Ferocious metal animals: Guerrilla Games
The robots -- referred to as 'machines' by the game's characters -- often roam in packs. Guerrilla Games/Sony
There are camps of bandits spread out across the massive open-world of 'Horizon Zero Dawn.' Clearing them of bandits gives you a safe place to save the game, trade with merchants, and explore for treasure.

And the occasional metal dinosaur, naturally: Guerrilla Games
These guys are called 'Tallnecks.' They act like towers in the 'Assassin's Creed' series, illuminating huge patches of the game's map.

Part of what makes 'Horizon Zero Dawn' so incredible is the interaction between your character and the metal animals. They're incredibly dangerous, and Aloy is only equipped with a bow for much of the game. When I first saw a Thunderjaw, for instance, I panicked. It's hard enough taking down human enemies -- how in the world do you take down a massive metal T-rex? Rather than imbuing Aloy with 'magical powers' or some nonsense, she uses a variety of different types of arrows to tactically dismantle robots. In this way, 'Horizon Zero Dawn' smartly encourages you to stay cool in tense situations. The way out of a bad situation is rarely brute force. Guerrilla Games/Sony
You'll also be doing a lot of hiding in bushes. I certainly did.

As Aloy learns more about the world and herself, she picks up new skills. Overriding robot animals and, say, using one as a horse: Aloy can only ride a handful of the animals, which can be extremely useful for travelling long distances. There's a 'fast travel' system in the game, but it's limited intentionally to encourage exploration. Exploring the world of 'Horizon Zero Dawn' is the absolute best part of the game. It's gorgeous, varied, and rich with environmental storytelling. There are sweeping desert canyons: Guerrilla Games
This image was scaled down from 4K resolution, and you're likely not seeing it on a 4K screen, so please ignore the text in the image.

Much of the 50-plus hours I spent in the world of 'Horizon Zero Dawn' was just me walking around in-between objectives. That's because there's SO MUCH to do. I could go hunting for real animals, which I can turn into stuff like larger arrow quivers.

Guerrilla Games/Sony
With views like this, do you blame me?

Or I could go exploring one of the game's hidden 'bunkers,' which act like tombs in a 'Tomb Raider' game. They're massive puzzles with big payoffs, in both story and gameplay. Excuse my ambiguity as I try not to spoil major parts of 'Horizon Zero Dawn'! Guerrilla Games/Sony
'Horizon Zero Dawn' is a game full of delightful secrets waiting to be found. It's without caveat that I'd suggest 'Horizon Zero Dawn' to anyone who likes great video games. It's an incredibly impressive first entry -- in what is sure to become a major franchise -- exclusive to Sony's PlayStation consoles. Don't miss it! 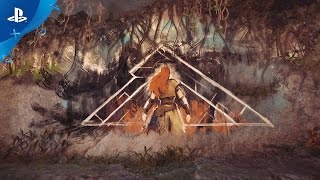